Obesity and weight gain is a major health problem in Australia, with an increasingly large proportion of the general population – around a third – being in the obese range (BMI >=30 kg/m2). 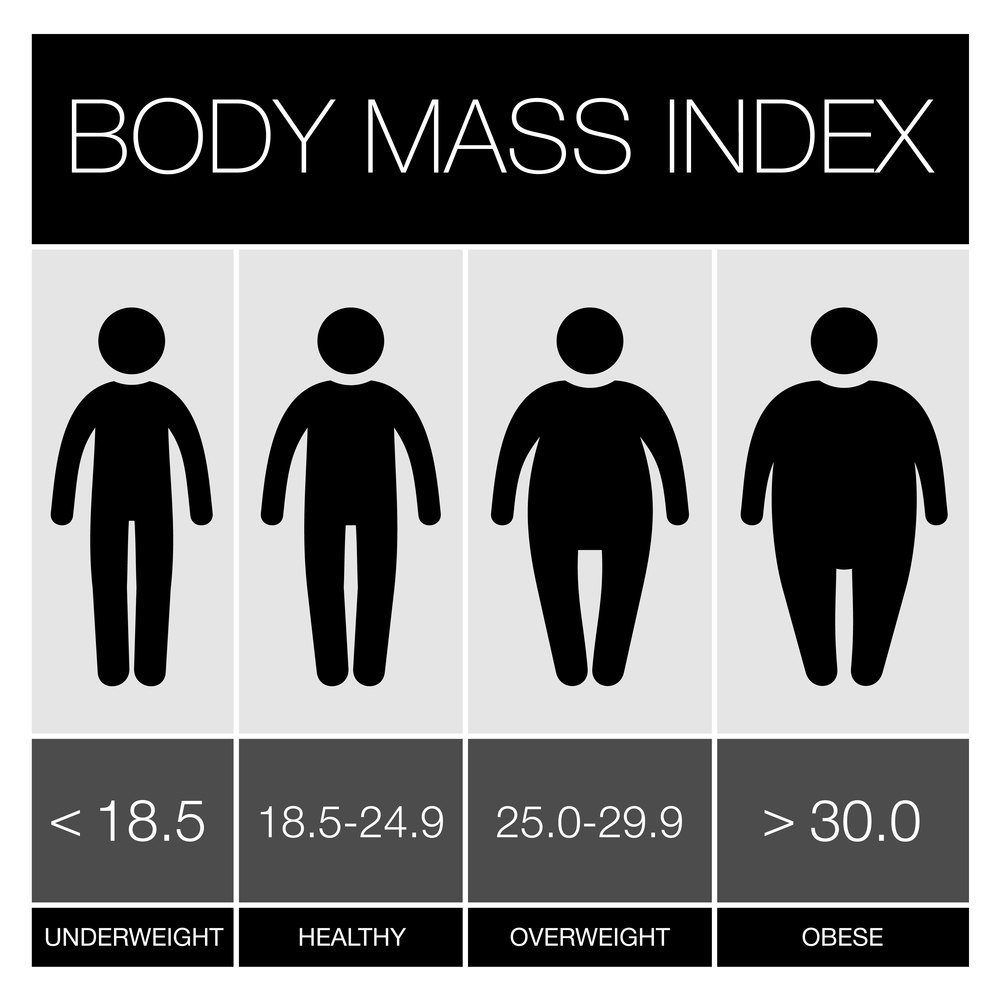 Obesity and weight gain is linked with a number of psychiatric issues, including depression; and many people living with obesity feel stigmatised and ostracised.

But in terms of a burden of obesity, people with serious mental illnesses such as schizophrenia stand out: in the Australian Study of High Impact Psychoses (SHIP), conducted in 2010, three-quarters of people with psychotic disorders were overweight or obese. [1] 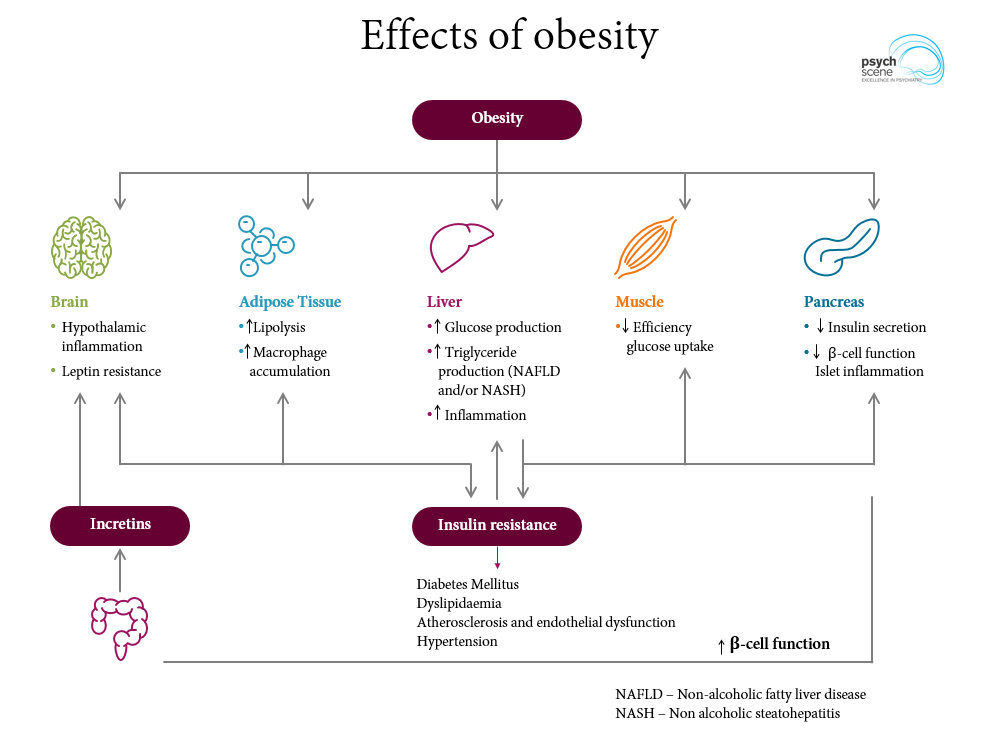 Obesity, along with diabetes, hypertension, dyslipidaemia and cigarette smoking, contributes to the overall high cardiovascular risk burden associated with schizophrenia, in turn adding to decreased longevity.

Obesity is largely consequent upon overconsumption of energy-rich foods, and some of the medications we prescribe for people with schizophrenia can enhance cravings for ‘junk’ food, as well as having other effects that add to the obesity risk profile.

To tackle obesity in our patients, we need to understand the underlying neurobiology. [2]

CNS stimuli relating to hunger and satiety is mediated by some peptides that either stimulate or suppress hunger. 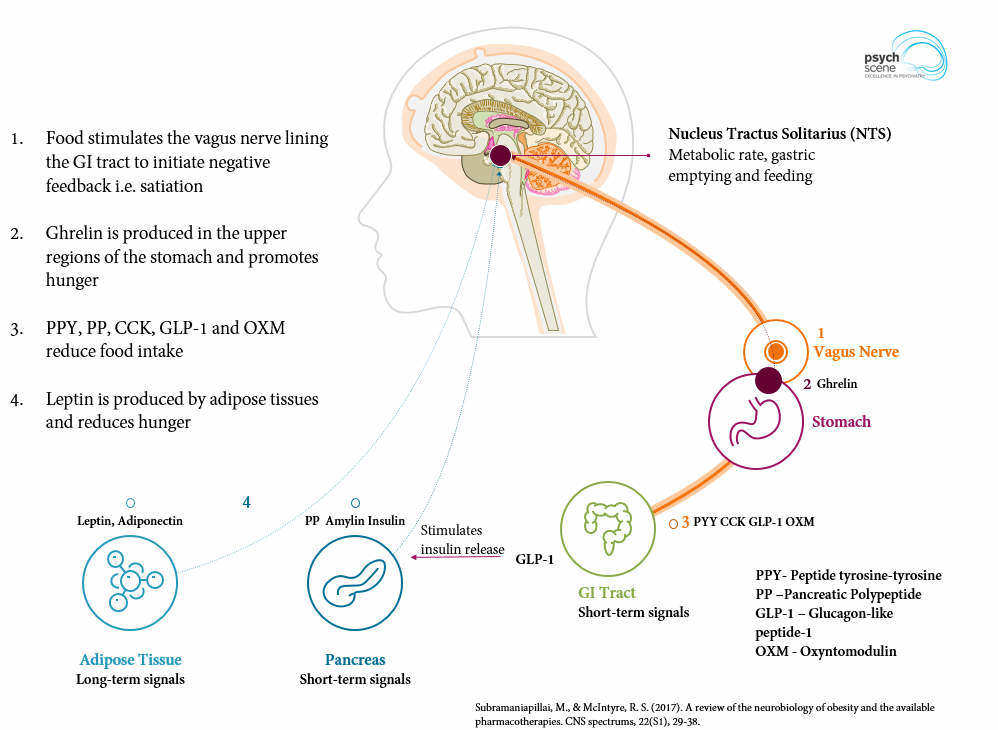 The 4 of the most important peptides are:

The diagram below shows how the balance between ghrelin and leptin is linked to appetite control. 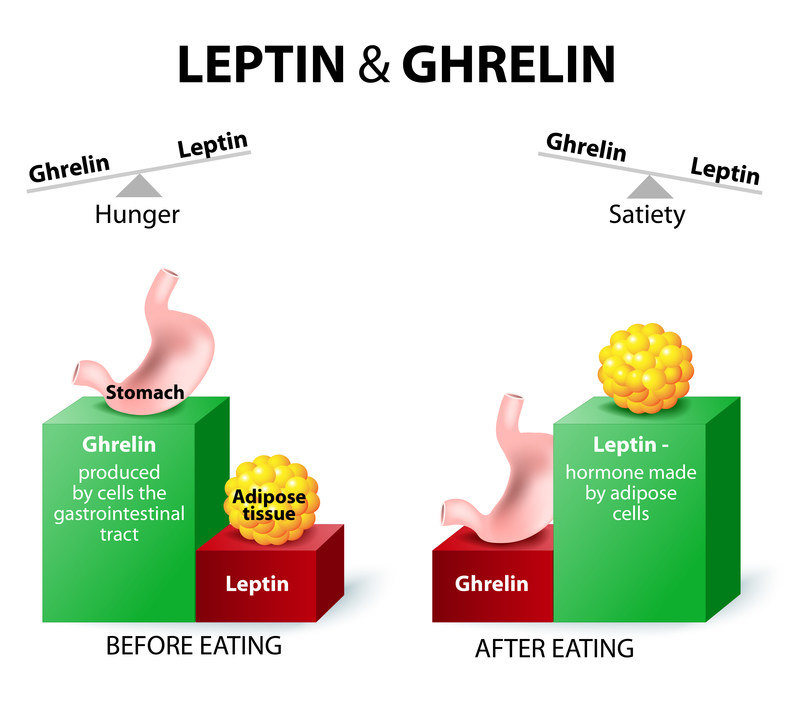 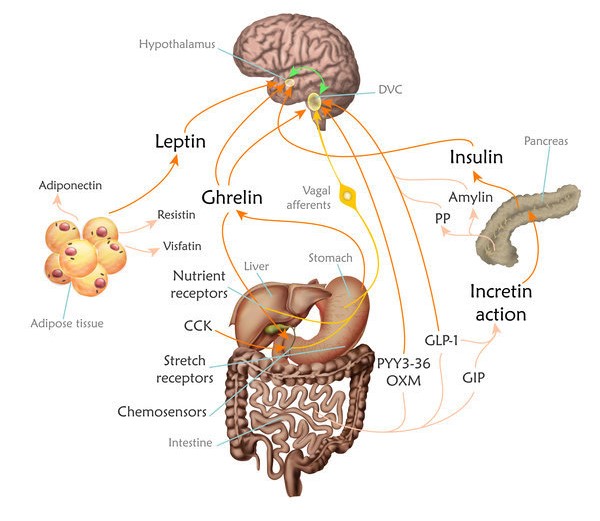 A recent Melbourne study showed that after weight loss occurs, reductions in levels of leptin and CCK, and increased levels of ghrelin and orexin, can persist for more than a year; this makes maintenance of weight loss extremely difficult. [3]

Other hormones produced in the GI tract that decrease the amount of food intake include pancreatic polypeptide (PP), peptide tyrosine-tyrosine (PYY), and oxyntomodulin (OXM). 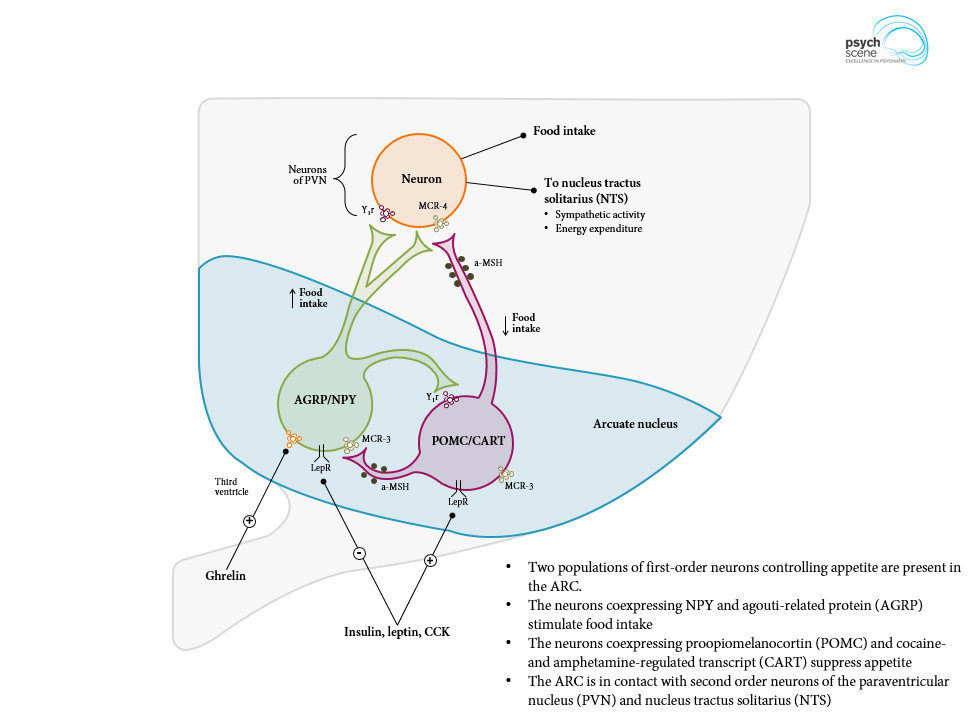 Behavioural aspects of Obesity and Overeating

The mesolimbic reward pathway projects from the ventral tegmental area (VTA) to the nucleus accumbens (NA) in the limbic system. This pathway stimulates pleasure by increasing the release of dopamine.
Food is known to activate the mesolimbic reward system leading to the experience of pleasure which inturn can activate food seeking behaviour through activation of cognitive processes involved in motivation. 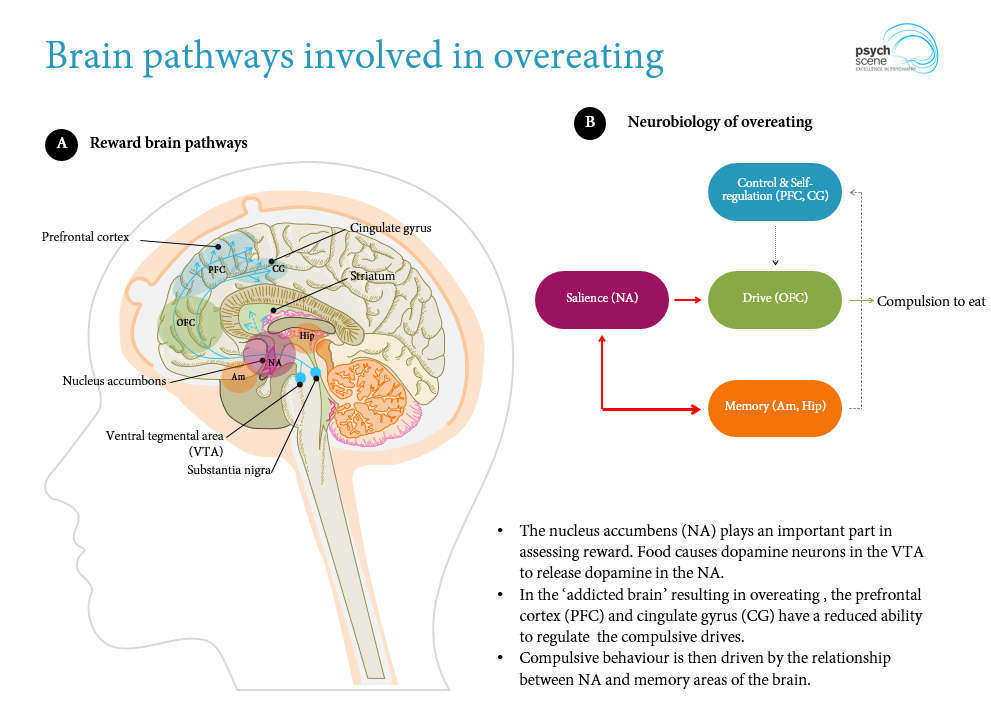 Obesity is also known to be associated with  blunted feelings of reward and pleasure. Thus, greater consumption of food may be required to experience the same levels of enjoyment. Learn more about the neurobiology of addiction which is also the basis behind food addiction.

Both orexin and ghrelin receptors are found in the VTA and dysregulation of these markers are postulated to play a part in obesity.

Motivating obese people to address their weight can be tricky, and many ‘scare tactic’ health messaging approaches only demoralise people and make them feel stigmatised.

Managing the expectations of patients on psychotropics is also important. It has been shown that weight loss of 5-10%  can reduce and reverse complications related to obesity and improve quality of life, and these non-weight goals should be emphasised. [4]

Pharmacological agents in weight gain and obesity act peripherally, centrally or through both peripheral and central effects.

Below is a visual guide on the mechanisms of the various available agents. 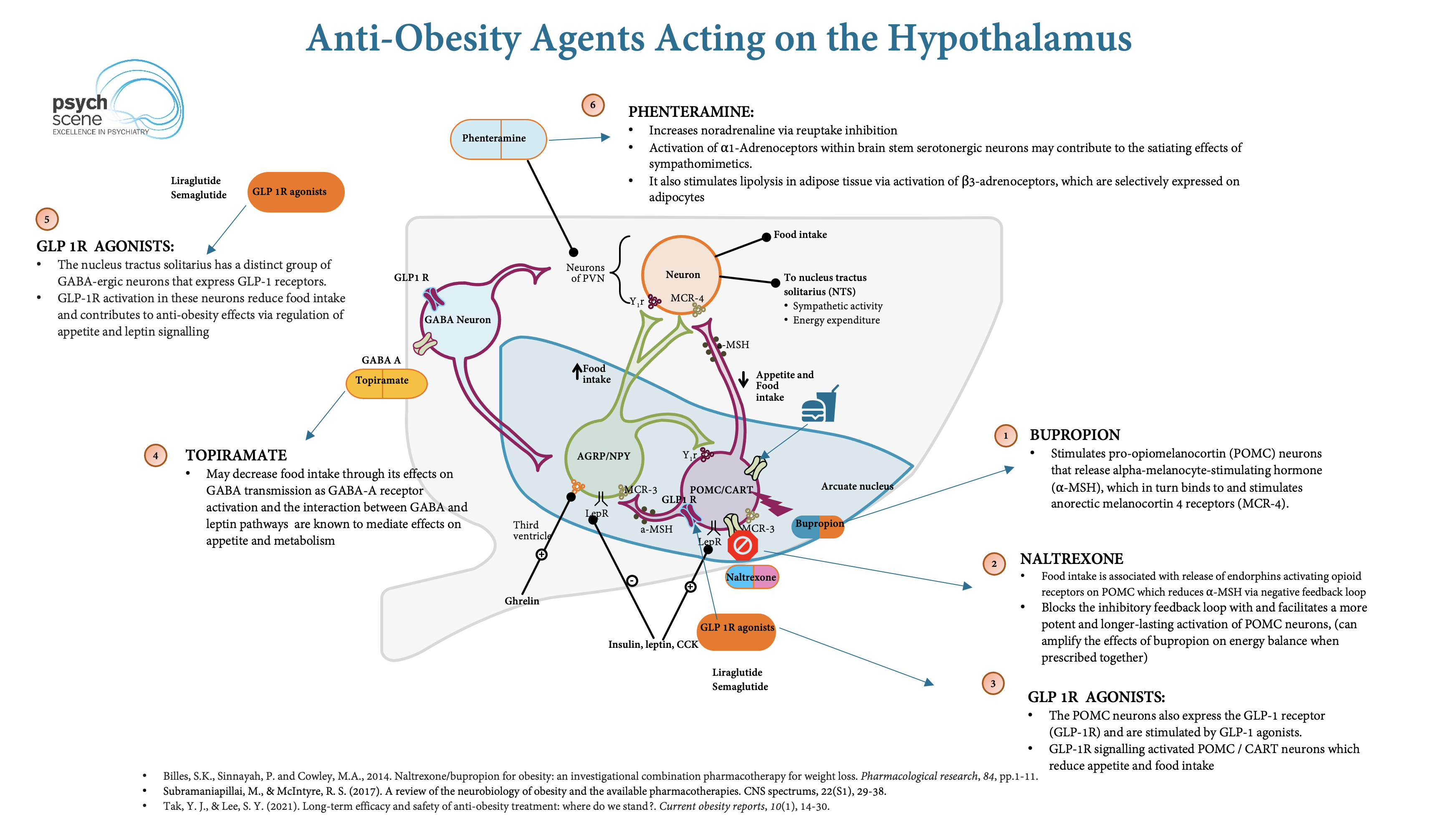 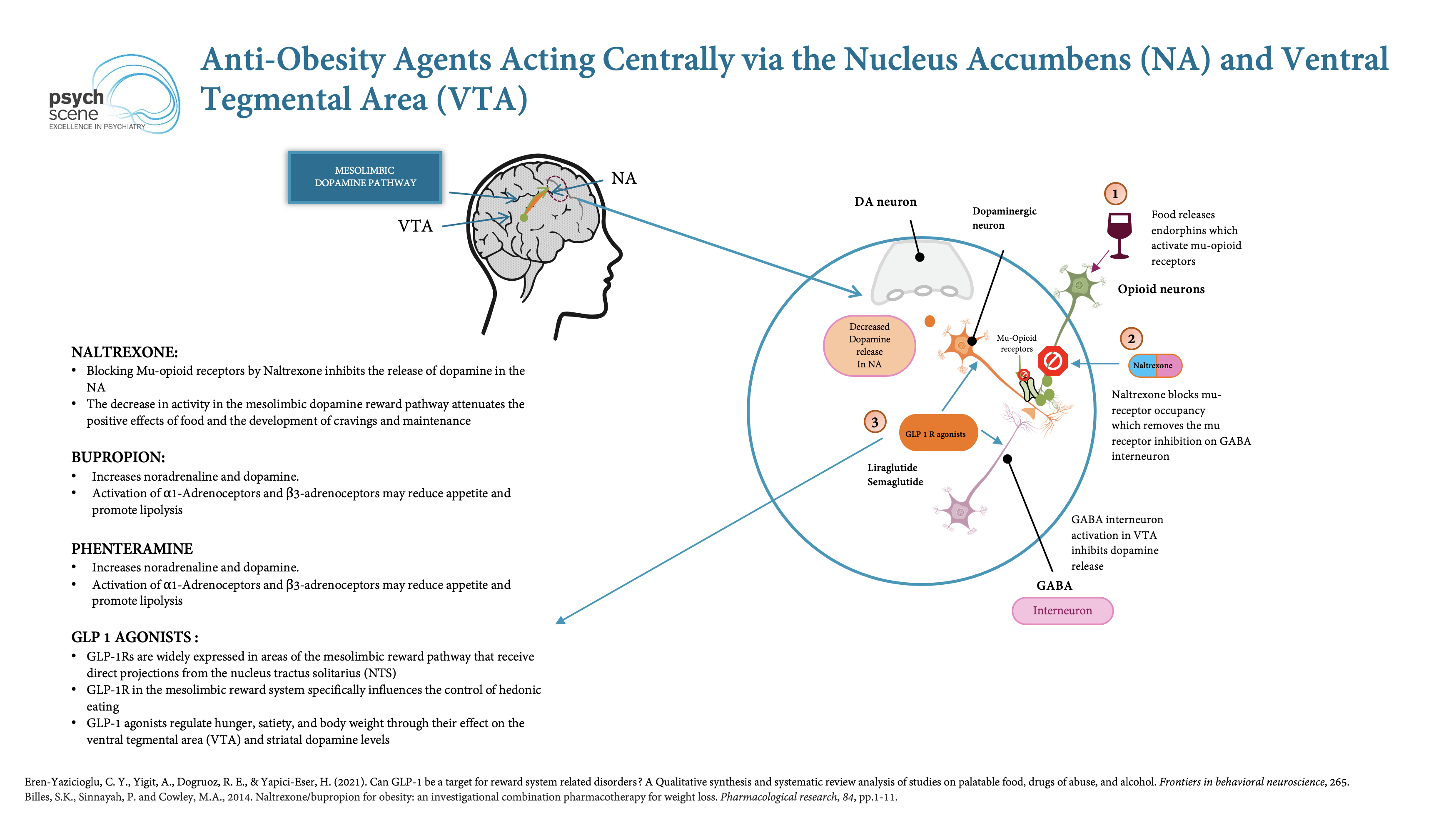 Several medication options for the treatment of obesity are either well established or are in development. Still, many of  these are not very suitable for people with schizophrenia either because of the requirement for strict adherence to diet (e.g. lipase inhibitors such as orlistat) or because they carry the risk of perturbation of mood or worsening of psychotic symptoms (e.g. stimulant-type anorectics).

Moreover, Orlistat is not centrally acting and does not address psychotropic hunger.

In this context, any pharmacological approach to the management of obesity in schizophrenia needs to consider, firstly, whether prescribed mental health medications add to the obesity burden.

In particular, antipsychotics such as olanzapine and clozapine carry a strong signal for weight gain; risperidone and paliperidone are less so.

Aripiprazole, brexpiprazole, lurasidone, cariprazine, asenapine and ziprasidone are generally not associated with large weight gain signals, albeit some individuals do gain weight on any of these agents and all patients prescribed antipsychotics should receive dietary/exercise advice and metabolic monitoring.

A general mantra should be to try to avoid medications that are likely to cause or exacerbate weight gain, as once the person has gained weight it is difficult to lose.

In particular, olanzapine should generally not be instituted first line, and this advice is reflected in the RANZCP Clinical Practice Guideline (CPG) for psychotic disorders. [5]

If the person has gained weight on a particular antipsychotic, consideration should be given to a switch to a drug less likely to exacerbate the problem: of course, due consideration needs to be given to the risk of relapse of psychosis, and any switch needs to be performed carefully and with the full engagement of the patient (and carers, where appropriate).

Learn more about the management of metabolic syndrome with antipsychotics through talks from Prof Correll and Dr Stahl.

For example, an instructive recent study showed that patients who had gained weight on olanzapine could be switched to lurasidone with beneficial effects for weight and no worsening of psychotic symptom control. [6]

If the individual cannot be switched to another antipsychotic or does not lose weight after switching, several strategies might be considered.

Perhaps the easiest and best validated is the addition of metformin (500mg twice a day is a usual target dose, but higher doses have been used in some clinical trials).

There are few side effects, and a number of studies (mostly using it as an adjunct to olanzapine) attest to modest weight loss (2-3kg) in addition to beneficial effects in terms of improving insulin resistance. [7]

Adding the partial dopamine agonist aripiprazole to clozapine has also found support in the literature and favour amongst clinicians: an added benefit is the ability, often, to reduce the overall clozapine dose. [8]

Topiramate has also been used as an adjunct to antipsychotics, but many patients find that it impacts cognition, and there is also a risk of increased suicidality in some patients.

When tolerated, doses of up to 100mg can be very effective in producing a complete disinterest in food resulting in a substantial reduction in calorie intake.

There is, however, emerging evidence and current excitement – as outlined above – about the potential of the glucagon-like peptide-1 receptor analogues such as liraglutide and semaglutide to reduce weight and reverse glucose intolerance in people who have gained weight on antipsychotics: weight loss is more dramatic than that seen in trials of metformin because of its ability to reduce psychotropic hunger and increase satiety. Glucose tolerance can also be reversed. [9]

GLP-1RAs have been postulated to have neuroprotective, anti-inflammatory, cardiovascular protective, and metabolic regulatory effects. [Tak & Lee, 2021]

The dose of 3.0mg has been approved in Australia for weight loss and 1.8mg for diabetes.

A study evaluating 3731 non-mental health patients published in the NEJM using a dose of 3.0mg for 52 weeks produced an average weight loss of 8.4 kg with 33.1% of participants losing more than 10% of their weight. [10]

After stopping liraglutide, the bodyweight reduction was partially sustained for 1 year. However, the improvements in other metabolic parameters returned to baseline levels. [Svensson et al., 2019]

2.4 mg of semaglutide once weekly plus lifestyle intervention was associated with a sustained, clinically relevant reduction in body weight. [Wilding et al., 2021]

The use of semaglutide in patients on antipsychotics has not yet been studied. In the author’s experience (Dr Sanil Rege), Semaglutide has been successfully used (in conjunction with physician input) in olanzapine-induced weight gain with clinically significant weight loss.

A study looking at semaglutide as an adjunct with metformin in patients taking clozapine is underway. [The COaST trial]

Finally, in extreme cases, bariatric surgical procedures might be explored.

Diabetes Australia has recently come out with a new position statement stating that those with a BMI over 35 and type 2 diabetes should be considered for bariatric surgery. Many mental health patients would fit these criteria. Read more about the role of the psychiatrist in obesity and bariatric surgery.

Having a severe mental health issue such as schizophrenia is not an exclusion for such interventions. Still, extra care needs to be taken in the work-up, consent process and peri-surgical support and aftercare.

Some people find the dietary restrictions required to adhere to and can become frustrated and demoralised.

Very few studies have examined bariatric procedures in people with schizophrenia, but the small number of reported cases points to utility and tolerability. [11]

However, a study by Bhatti et al. (2016) reported that self-harm emergencies increased by 50% after surgery: the highest risk was in the 2nd and 3rd postoperative years. [12]

These patients were almost exclusively patients who had a history of mental illness. It is therefore imperative that patients are carefully screened and supported over extended periods. Larger studies with longer follow-up are required.

Obesity is a world-wide problem and carries numerous medical risks. People with psychotic disorders such as schizophrenia are at even greater risk than the general population of obesity.

Psychiatrists need to ensure that they do not unnecessarily increase this risk in their patients, by using medications known to be associated with substantial weight gain, unless there are no clinically sustainable alternatives.

If patients do gain excessive weight on a particular medication, consideration should be given to switching to another agent with less predilection to weight gain.

If that proves impossible or fails to reduce weight, various other options can be considered, including the addition of metformin and a range of other agents.

All patients going on to antipsychotics should be warned about potential weight gain, provided with advice about diet and exercise, and have their metabolic profile regularly monitored.

Weiss, C., Weiller, E., Baker, R. A., Duffy, R. A., Gwin, K. K., Zhang, P., & McQuade, R. D. (2018). The effects of brexpiprazole and aripiprazole on body weight as monotherapy in patients with schizophrenia and as adjunctive treatment in patients with major depressive disorder: an analysis of short-term and long-term studies. International clinical psychopharmacology, 33(5), 255.

Once-weekly semaglutide in adults with overweight or obesity.