Obesity is a critical public health problem predictive of the development of cardiovascular disease, metabolic syndrome, and type II diabetes. Obesity is more prevalent in people with a mental illness and contributes to the reduced life expectancy of this population. [Holt and Peveler, 2009]

MetS is associated with a doubling of the risk of developing cardiovascular disease within 5-10 years and up to five times greater risk of developing Type 2 diabetes which contributes to early mortality in patients with psychosis.

Below are the criteria for metabolic syndrome. [Alberti et al., 2006] 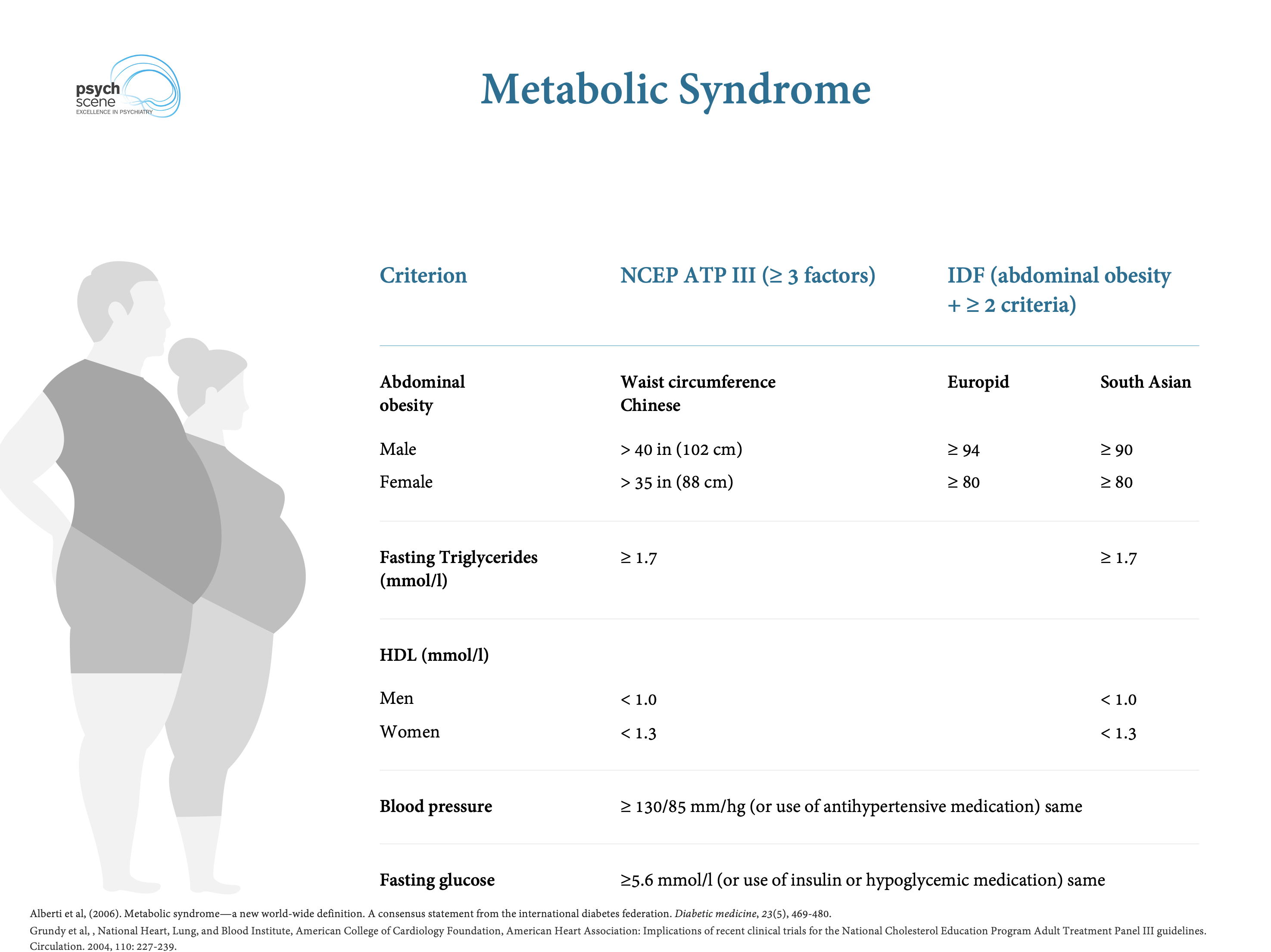 There exists a complex relationship between adiposity, blood glucose and serum lipids in relation to antipsychotics.

Second-generation antipsychotics (SGAs) are currently the first-line treatment for psychotic disorders and bipolar disorder. However, these agents are associated with an increase in the risk of adverse cardiometabolic effects.

The most significant weight gain associated with antipsychotics in previously drug-naive patients with schizophrenia occurs in the first few months.

Their orexigenic weight gain potential is more significant in children and adolescents than in adults.

Clinically significant weight gain is defined as a 7% or greater increase in total body weight. [Sachs and Guille, 1999]

In another study, the Comparison of Atypicals in First Episode of Psychosis (CAFÉ) trial, long-term antipsychotic use was associated with [McEvoy et al., 2007] :

Overall, evidence in the literature suggests that the weight gain potential of different atypical antipsychotics follows this order:

Increased weight gain can set up a cascade toward dyslipidemia and diabetes. 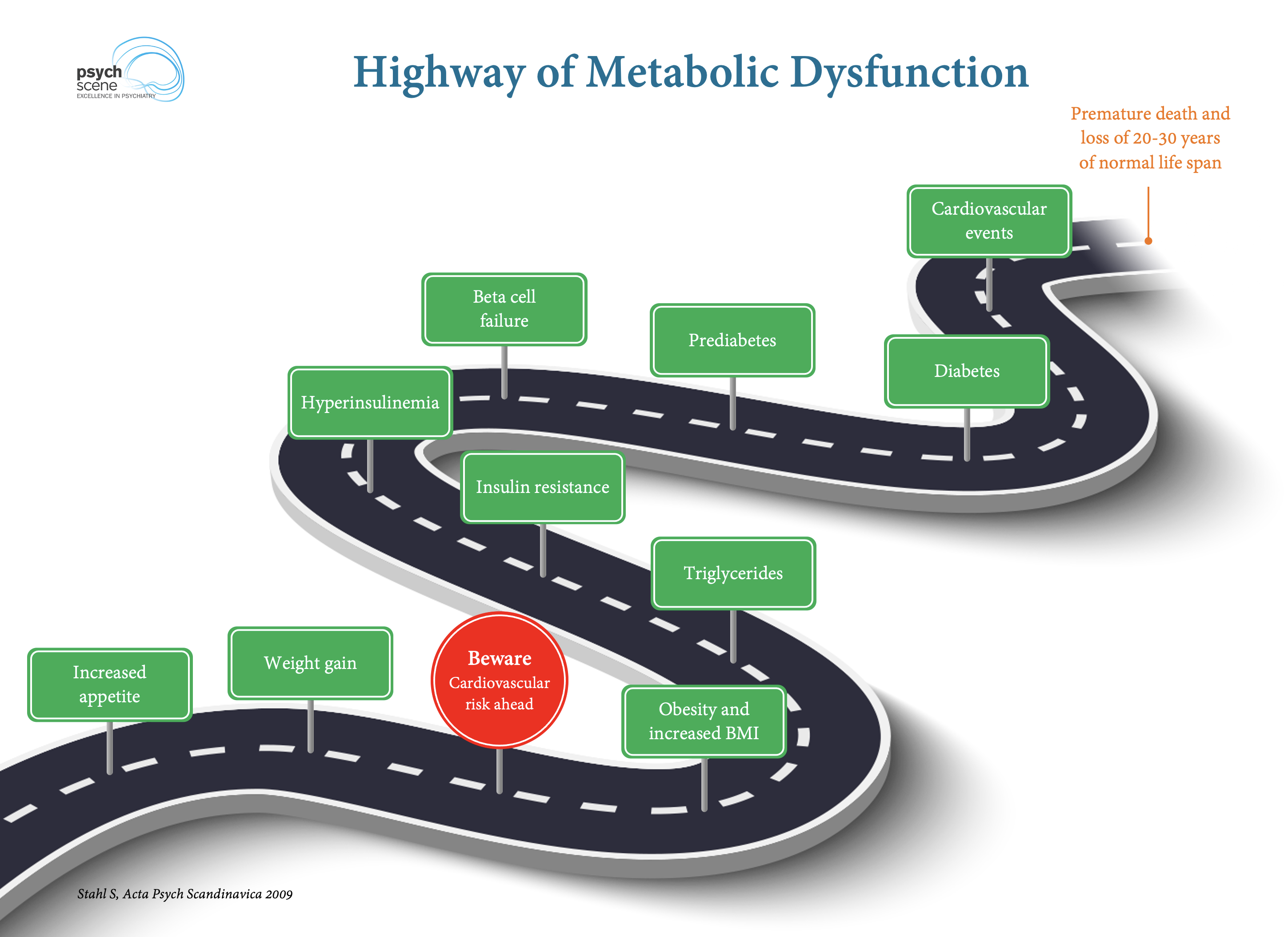 The following diagrams have been simplified from the review by [Pillinger et al., 2020] Confidence intervals have not been included in the below charts. You can view the full article here. 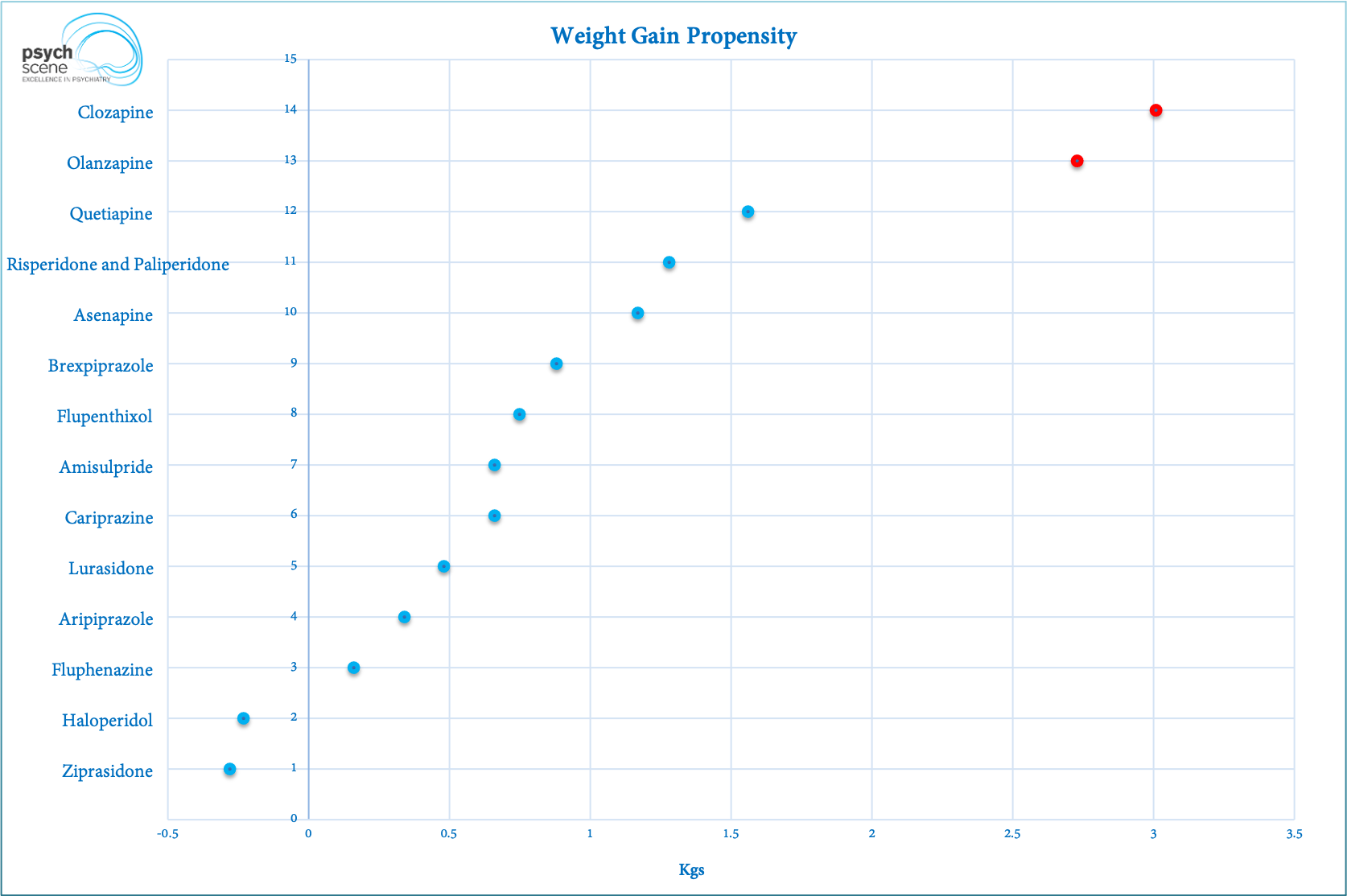 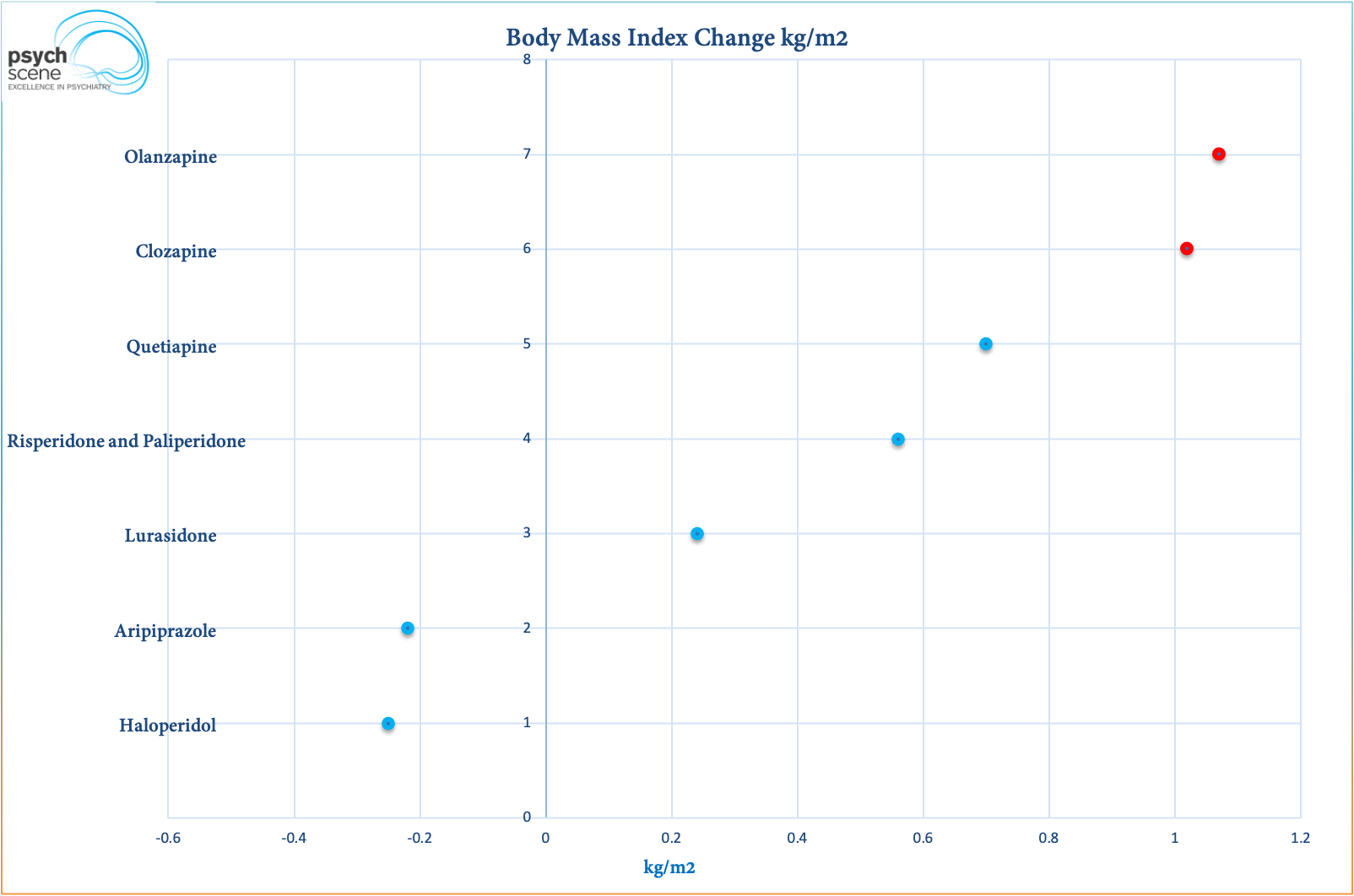 Schizophrenia is an independent risk factor for type 2 diabetes, and type 2 diabetes has been associated with typical and atypical antipsychotics. [Bushe & Leonard, 2004]

Disruption of an individual’s energy metabolism is emphasised by the observations of the increased prevalence of diabetes in people with schizophrenia —almost two times greater than in the general population. [Mathews and Muzina, 2007]

Antipsychotics and the risk of diabetes. Chart simplified from [Pillinger et al., 2020] 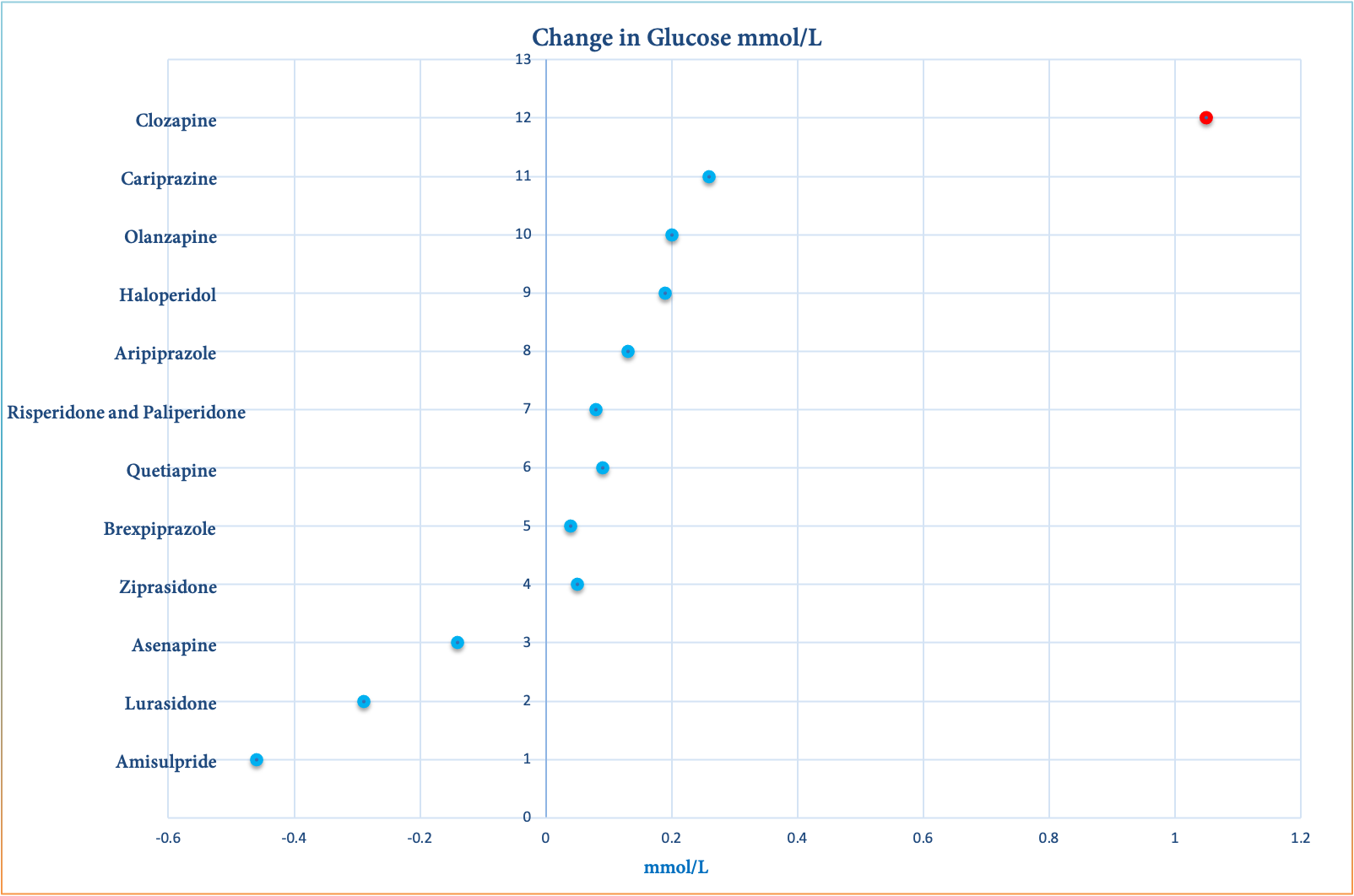 Analysis of particular receptor occupancy and the propensity of specific medications to weight gain has led to the conclusion that several neurochemical factors are associated with antipsychotic-associated weight gain. In summary, these include: [Manu et al., 2015], [Rege, 2008] 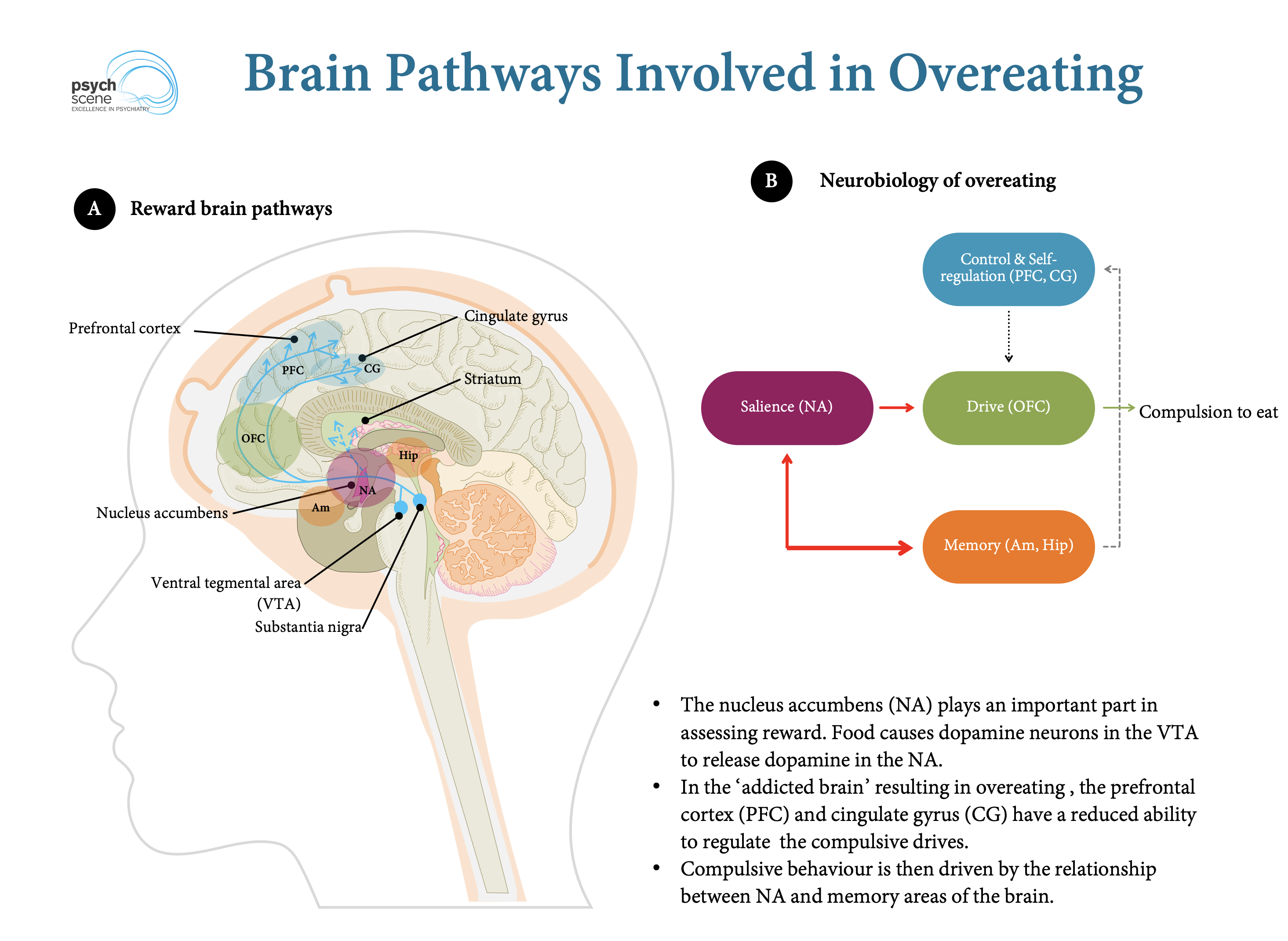 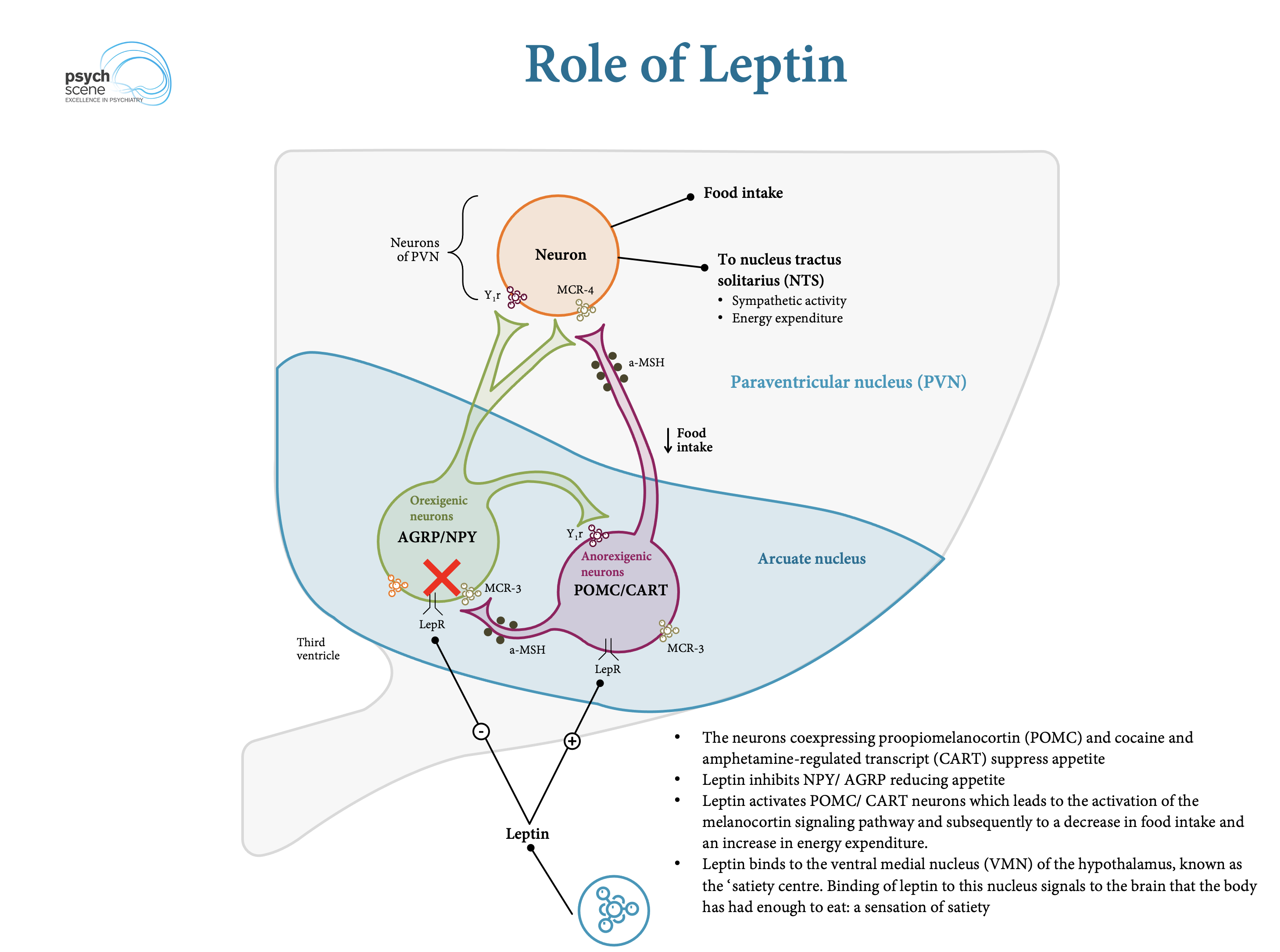 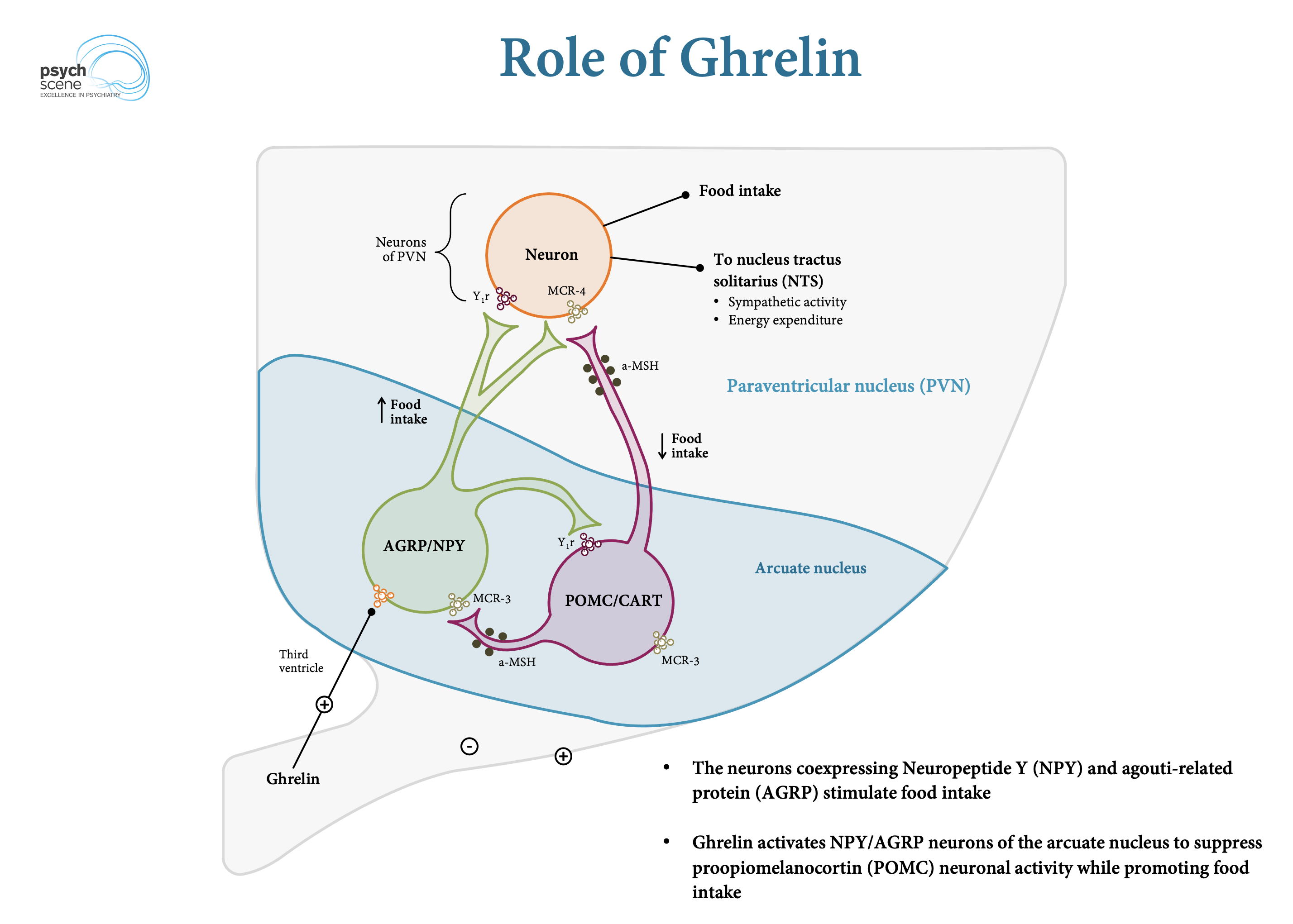 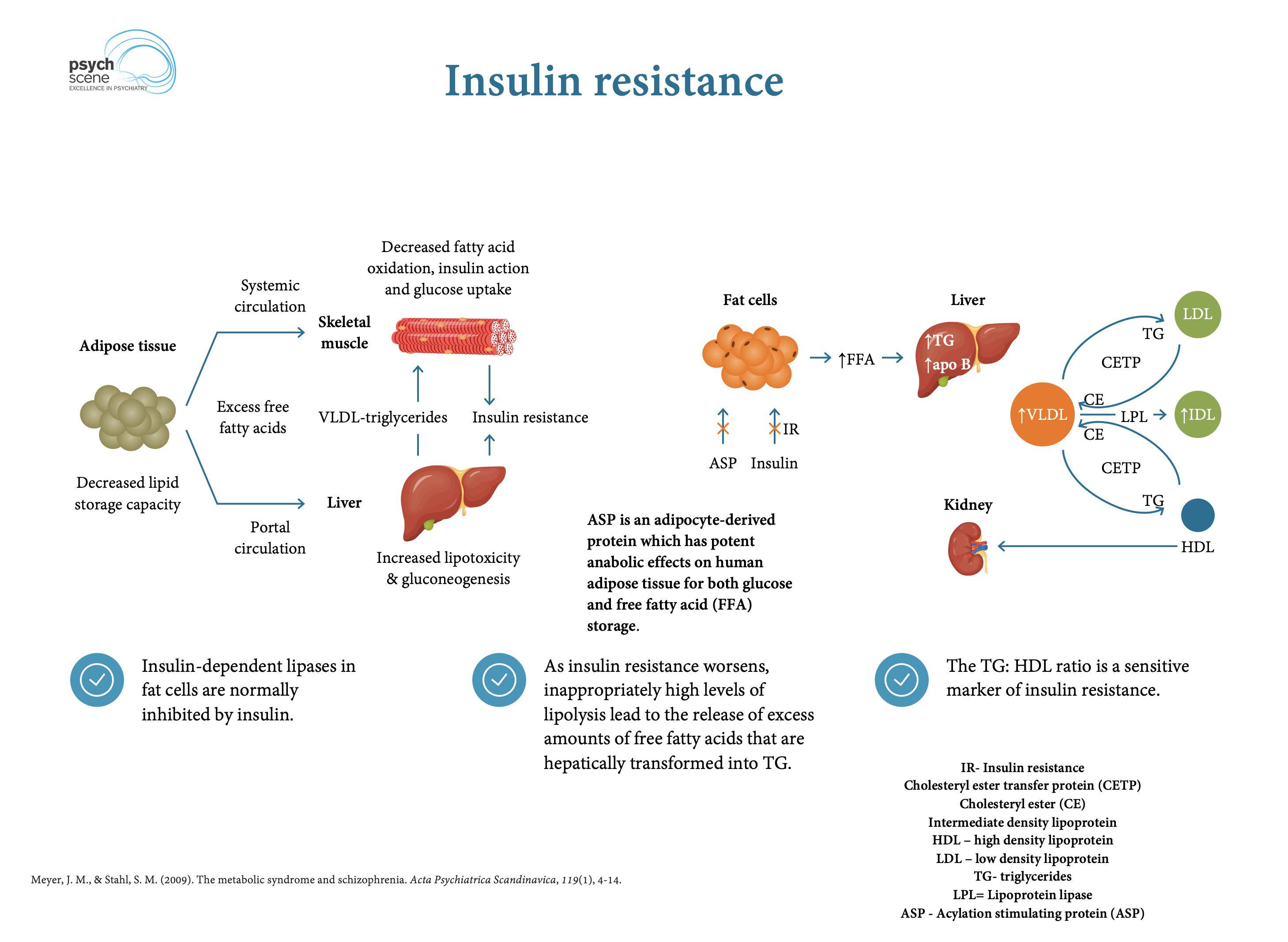 However, many receptors are involved in insulin signalling that may contribute to overall metabolic dysfunction. 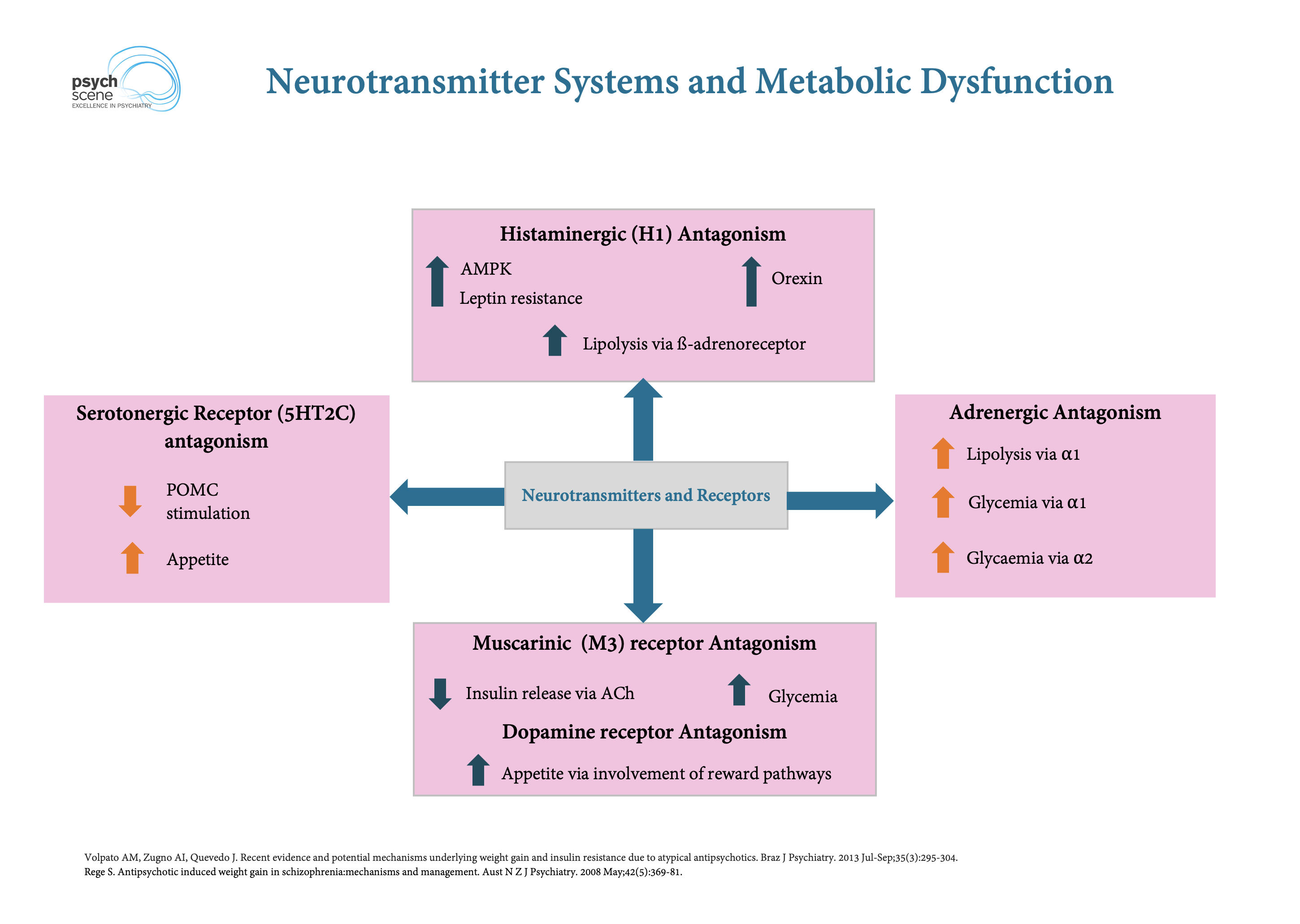 Some people don’t mind talking about their weight; others don’t want to talk about it. How do you feel about this?’ 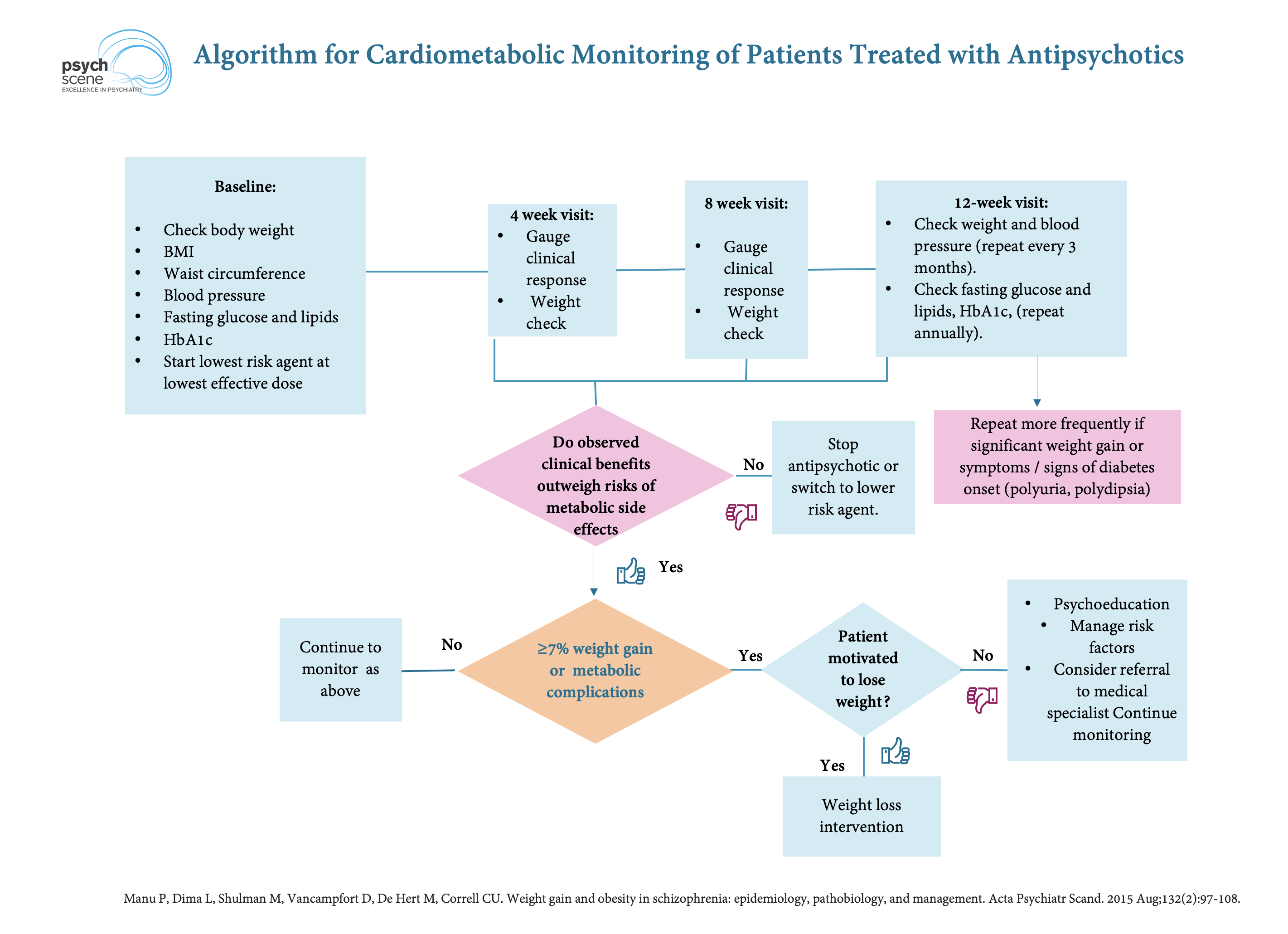 Choice of low-risk antipsychotics is critical, and prevention should always be the focus in the management of schizophrenia.[Castle et al., 2021]

Once clinically significant weight gain has occurred, there are three main strategies:

A meta-analysis showed that switching antipsychotics to agents with lower weight gain potential, notably to aripiprazole and ziprasidone, can improve weight profile and other cardiometabolic outcomes. No significant weight or other cardiometabolic changes were observed when switching to amisulpride, paliperidone/risperidone, quetiapine, or lurasidone. [Siskind et al., 2021]

Another instructive recent study showed that patients who had gained weight on olanzapine could be switched to lurasidone with beneficial effects for weight and no worsening of psychotic symptom control. [Stahl et al., 2013]

Although all interventions showed a weight reduction compared to treatment as usual, there was a trend favouring nutritional counselling.

The pharmacology of antipsychotic-induced weight gain is likely to be multifactorial, making it difficult to develop targeted pharmacological interventions. The literature on pharmacological agents that have been investigated has produced highly heterogeneous data.

A comprehensive meta-analysis of 32 randomised placebo-controlled trials analysed the efficacy of 15 pharmacological agents to reduce weight gain in patients who experienced weight gain over a mean of 13 weeks. [Maayan et al., 2010]

Sibutramine’s psychiatric application may be limited because it has been known to cause panic, psychosis and mania. 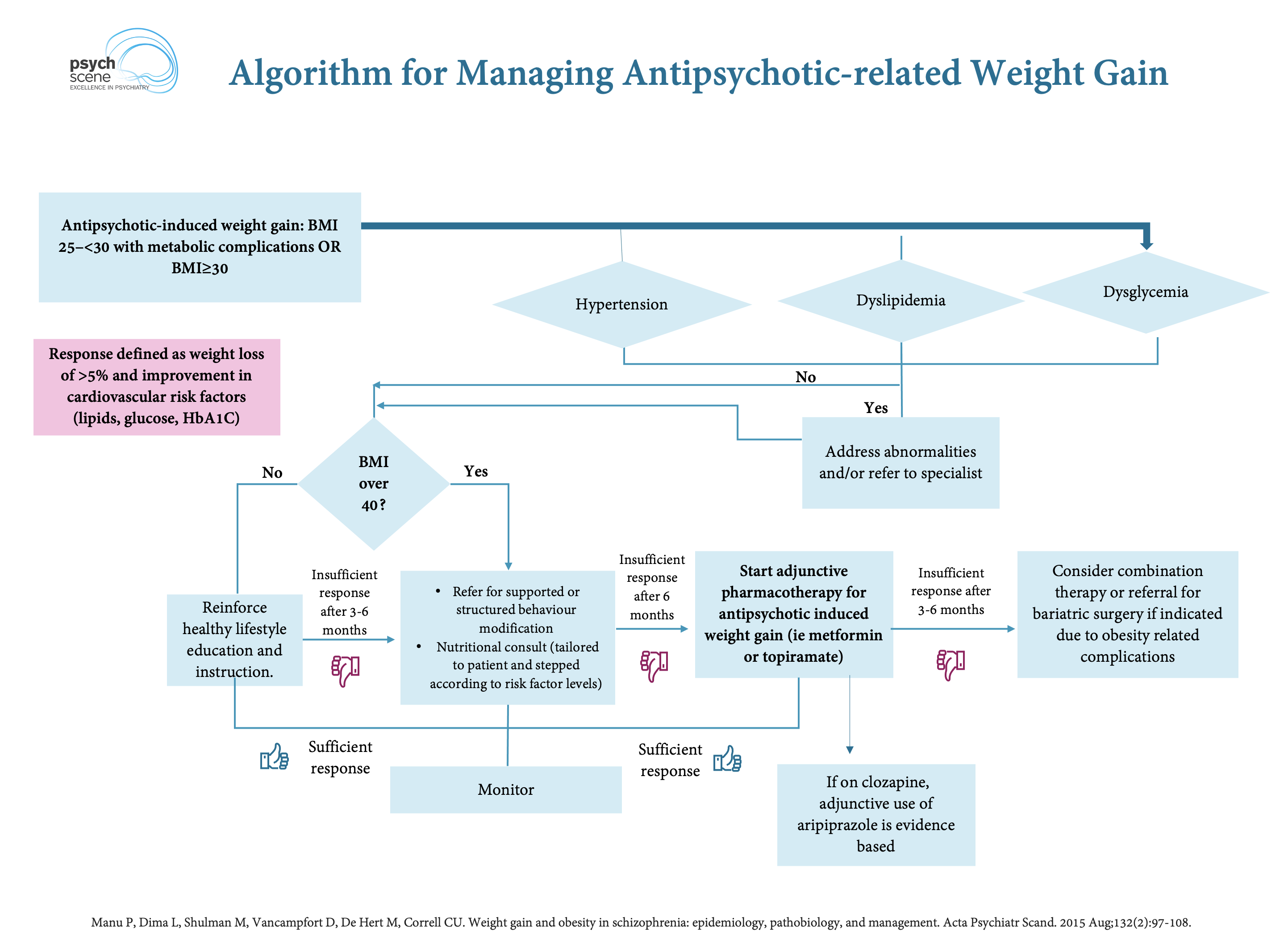 Weight gain and metabolic dysfunction due to antipsychotic medication are associated with significant physical and psychological morbidity.

Individuals treated with antipsychotics have concerns about weight gain and weight management, like the general population, and express a desire to be more active.

Achieving an optimal trade-off between effectiveness and side-effects of antipsychotic medications is achievable.

It calls for a shared decision-making model when prescribing an antipsychotic, involving the patient, clinician and carer(s) that considers several factors such as patient values and preference, response and tolerance.

Obesity as a risk factor for antipsychotic noncompliance

Allison D et al., The impact of weight gain on quality of life among persons with schizophrenia. Psychiatr Serv. 2003.

Weight gain in antipsychotic-naive patients: a review and meta-analysis

Weight gain associated with use of psychotropic medications

Efficacy and tolerability of olanzapine, quetiapine, and risperidone in the treatment of early psychosis: a randomized, double-blind 52-week comparison

McEvoy J et al., Efficacy and tolerability of olanzapine, quetiapine, and risperidone in the treatment of early psychosis: a randomized, double-blind 52-week comparison. Am J Psychiatry. 2007.

Comparison of the Metabolic Characteristics of Newer Second Generation Antipsychotics Brexpiprazole, Lurasidone, Asenapine, Cariprazine, and Iloperidone With Olanzapine as a Comparator

Comparative effects of 18 antipsychotics on metabolic function in patients with schizophrenia, predictors of metabolic dysregulation, and association with psychopathology: a systematic review and network meta-analysis.

Weight gain and obesity in schizophrenia: epidemiology, pathobiology, and management

Energy expenditure and physical activity in clozapine use: implications for weight management

The dietary pattern of patients with schizophrenia: A systematic review

Clozapine and olanzapine are associated with food craving and binge eating: results from a randomized double-blind study

Association Between Antipsychotic Medication Use and Diabetes

The metabolic syndrome and schizophrenia

A clinical study of the association of antipsychotics with hyperlipidemia

Abnormalities in glucose regulation during antipsychotic treatment of schizophrenia

Sernyak M et al., Association of diabetes mellitus with use of atypical neuroleptics in the treatment of schizophrenia. Am J Psychiatry. 2002.

How can antipsychotics cause Diabetes Mellitus? Insights based on receptor-binding profiles, humoral factors and transporter proteins

Starrenburg F and Bogers J.  How can antipsychotics cause Diabetes Mellitus? Insights based on receptor-binding profiles, humoral factors and transporter proteins. Eur Psychiatry. 2009.

2013 AHA/ACC/TOS Guideline for the Management of Overweight and Obesity in Adults: A Report of the American College of Cardiology/American Heart Association Task Force on Practice Guidelines and The Obesity Society

Does switching to a new antipsychotic improve outcomes? Data from the CATIE Trial

Effectiveness of lurasidone for patients with schizophrenia following 6 weeks of acute treatment with lurasidone, olanzapine, or placebo: a 6-month, open-label, extension study

Endocrine and adverse metabolic effects of psychotropic medications in children and adolescents.

Metformin in prevention and treatment of antipsychotic induced weight gain: a systematic review and meta-analysis

Is clozapine—aripiprazole combination a useful regime in the management of treatment-resistant schizophrenia?

The effects of brexpiprazole and aripiprazole on body weight as monotherapy in patients with schizophrenia and as adjunctive treatment in patients with major depressive disorder: an analysis of short-term and long-term studies

Weiss, C., Weiller, E., Baker, R. A., Duffy, R. A., Gwin, K. K., Zhang, P., & McQuade, R. D. (2018). The effects of brexpiprazole and aripiprazole on body weight as monotherapy in patients with schizophrenia and as adjunctive treatment in patients with major depressive disorder: an analysis of short-term and long-term studies. International clinical psychopharmacology, 33(5), 255.

Effect of Liraglutide Treatment on Prediabetes and Overweight or Obesity in Clozapine- or Olanzapine-Treated Patients With Schizophrenia Spectrum Disorder: A Randomized Clinical Trial.

A Randomized, Controlled Trial of 3.0 mg of Liraglutide in Weight Management

Treatment of clozapine-associated obesity and diabetes with exenatide in adults with schizophrenia: A randomized controlled trial (CODEX).

Once-Weekly Semaglutide in Adults with Overweight or Obesity