Cariprazine (Vraylar, Reagila) is an atypical antipsychotic approved in September 2015 to treat schizophrenia and for the acute treatment of manic or mixed episodes associated with bipolar I disorder as monotherapy. [McCormack 2015]

Cariprazine, or N-alkylpiperazine, is an organic compound consisting of a phenyl group bound to a piperazine skeleton. [Citrome 2013] 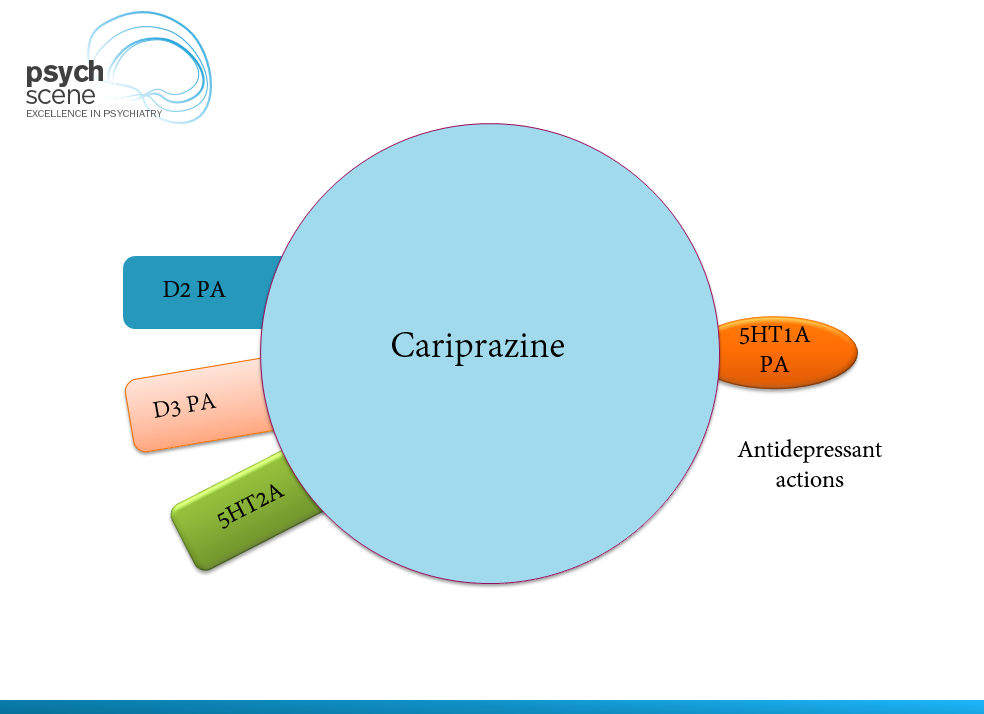 Cariprazine has very high binding affinities to the following receptors:

There are two isoforms of the D2 receptor with different functions: [Martel & Gatti McArthur, 2020]

Read the NMDA hypothesis in the article on Anti-NMDA encephalitis.

Cariprazine has a higher affinity for D3 receptors than D2 receptors (3- to 10-fold greater D3 affinity than aripiprazole), which is unique compared to other atypical antipsychotics such as aripiprazole and brexpiprazole.

An in vivo study in rats showed that cariprazine increased 5HT, NA and DA efflux in the nucleus accumbens (nACC) and hippocampus; Glycine and glutamate efflux in the nACC only. The neurotransmitter increase in key areas (nACC and hippocampus) contributes to the therapeutic efficacy in schizophrenia and bipolar disorder. [Huang et al. 2019]

D3 receptors are situated in the mesolimbic regions of the brain and control reward, emotion and motivation. 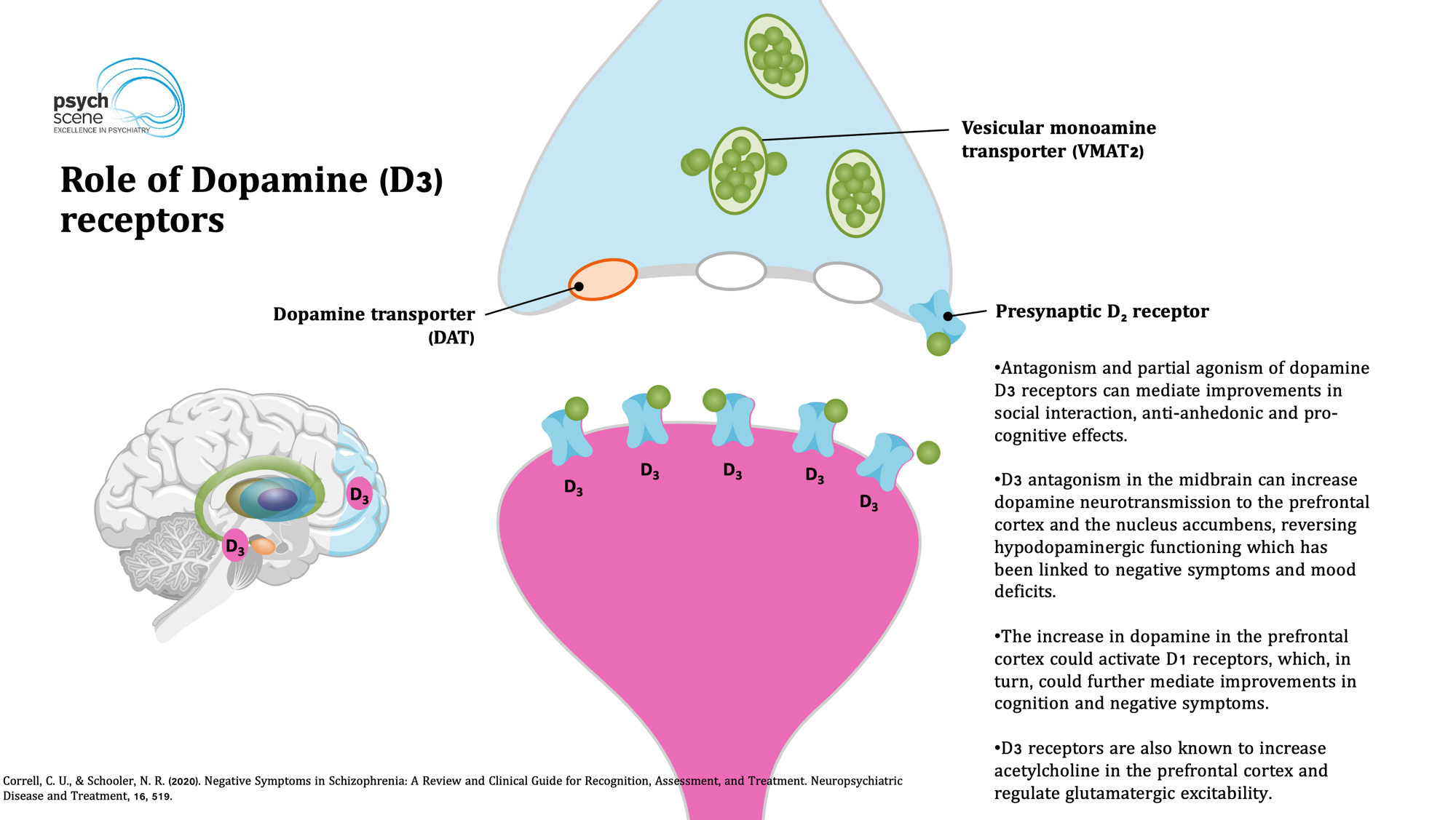 D3 receptors are postulated to play a role in the modulation of negative symptoms, mood and cognition. [Correll C & Schooler N et al., 2020]

Read a detailed review on negative symptoms in schizophrenia.

Using the half-life of total cariprazine (the sum of cariprazine and its major active metabolites DCAR and DDCAR), a time marker of 3 weeks for a steady-state has been estimated. [Citrome L,2013] 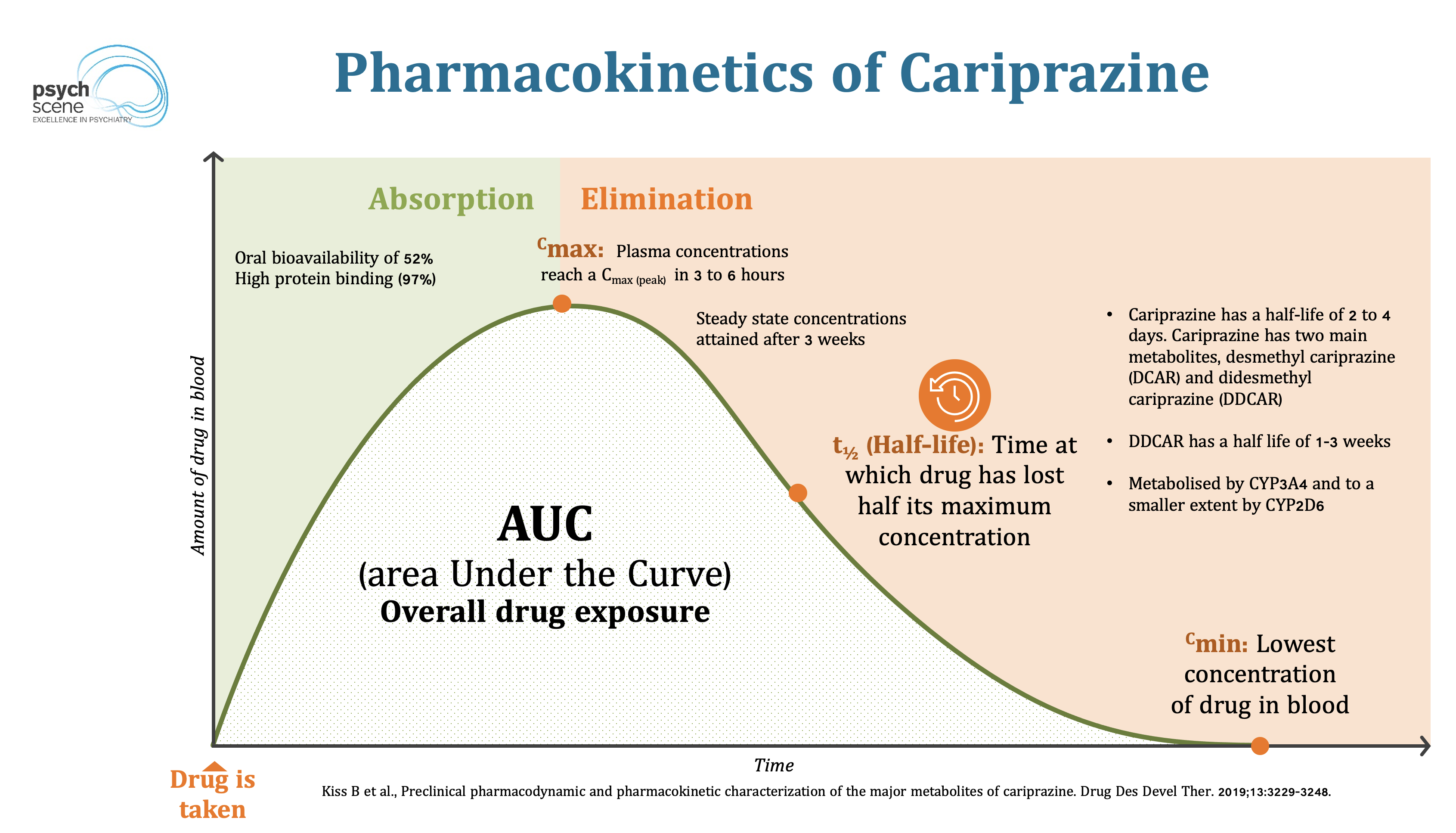 Cariprazine is extensively metabolised in the liver by CYP3A4 and, to a smaller degree, by CYP2D6 via hydroxylation and demethylation. Therefore, it is advised that patients currently being administered known inhibitors of the CYP3A4 enzyme should take a 50% dose reduction.

The Australian PI does not recommend reducing the Reagila dose by 50% with concomitant administration of strong or moderate CYP3A4 inhibitors but is a contraindication.

Read more on Pharmacogenomics and view tables on important CYP Enzymes with their substrates, inducers and inhibitors.

For patients with Bipolar I disorder (acute manic or mixed episodes), the target dose is 3 to 6 mg/day. In both indications, titration adjustments of 1.5 or 3 mg/day are permitted. [FDA VRYLAR]

Doses appear to differ for the different mood states across the spectrum.

Mania with or without concomitant depressive symptoms.

Cariprazine has been tested in clinical trials at higher doses; however, doses that exceed 6 mg/d did not confer significant additional benefit.

In Australia, Cariprazine is not approved for Bipolar Disorder.

Cariprazine and its two major metabolites accumulate over time, and thus adverse effects may take several weeks to appear.

The most common treatment-related adverse events that have been reported in clinical trials were akathisia, EPS, insomnia, headache, dizziness, tremor, and gastrointestinal disturbances. [Citrome, 2018] 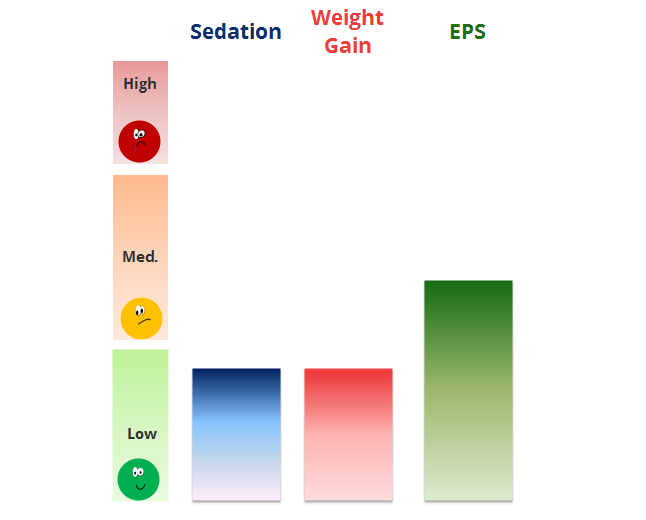 In addition, second-generation antipsychotics are associated with metabolic side effects, and therefore there is a potential for metabolic syndrome to occur. Clinically significant weight gain (versus placebo) was reported in a large meta-analysis of cariprazine use in schizophrenia, bipolar disorder, and unipolar depression. [Lao et al. 2016]

For the indication of schizophrenia, cariprazine when compared to the two other partial agonists, the rank order is as follows: [Citrome, 2018]

The propensity for weight gain

The propensity for somnolence

The propensity for Akathisia

Finally, there is a boxed warning for increased mortality in elderly patients with dementia-related psychosis, and therefore cariprazine is not approved in this population. [Vrylar, package insert]

In Europe, cariprazine’s product label states that it predominantly reduces negative symptoms in patients with schizophrenia. This support is based on a large 26-week clinical trial that was published in The Lancet.  [Németh et al. 2017]

Following are points from real-world experiences and recommendations from an International Panel in treating schizophrenia with Cariprazine: [Fagiolini et al., 2020]

Main patient characteristics for use :

One positive trial and others ongoing as an augmenting agent in patients with unipolar depression.

Cariprazine and Lurasidone are not approved in Australia for Bipolar Disorder.

Cariprazine is a dopamine D3-preferring D3/D2 receptor partial agonist with a promising safety and tolerability profile.

The unique pharmacokinetic and pharmacodynamic properties of cariprazine have important theoretical implications in terms of the therapeutic options for treating cognition, mood, and negative symptoms in patients with schizophrenia.

Evidence suggests that cariprazine may also be useful across the mood disorder spectrum.

Mechanism of action of cariprazine

Negative Symptoms in Schizophrenia: A Review and Clinical Guide for Recognition, Assessment, and Treatment

Cariprazine for acute and maintenance treatment of adults with schizophrenia: an evidence-based review and place in therapy

Citrome L. Cariprazine for acute and maintenance treatment of adults with schizophrenia: an evidence-based review and place in therapy. Neuropsychiatr Dis Treat. 2018; 14: 2563–2577.

The clinical challenges of akathisia

Comparative effects of 18 antipsychotics on metabolic function in patients with schizophrenia, predictors of metabolic dysregulation, and association with psychopathology: a systematic review and network meta-analysis

Pillinger et al, (2020). Comparative effects of 18 antipsychotics on metabolic function in patients with schizophrenia, predictors of metabolic dysregulation, and association with psychopathology: a systematic review and network meta-analysis. The Lancet Psychiatry, 7(1), 64-77.

Aripiprazole, brexpiprazole, and cariprazine: Not all the same

Cariprazine versus risperidone monotherapy for treatment of predominant negative symptoms in patients with schizophrenia: a randomised, double-blind, controlled trial

Treating schizophrenia with cariprazine: from clinical research to clinical practice. Real world experiences and recommendations from an International Panel

Clozapine augmentation with cariprazine for negative symptoms: a case series and literature review.

Cariprazine as a treatment across the bipolar I spectrum from depression to mania: mechanism of action and review of clinical data

Stahl, S. M., Laredo, S., & Morrissette, D. A. (2020). Cariprazine as a treatment across the bipolar I spectrum from depression to mania: mechanism of action and review of clinical data. Therapeutic advances in psychopharmacology.