Aripiprazole is an achiral quinolinone derivative and a second-generation antipsychotic that was approved for the treatment of schizophrenia in 2002.

Aripiprazole is pharmacologically different to other oral atypical antipsychotics in that it reduces dopaminergic neurotransmission through partial agonism of D2 receptors that are mainly in the mesolimbic and mesocortical pathways. [Shapiro et al 2003] 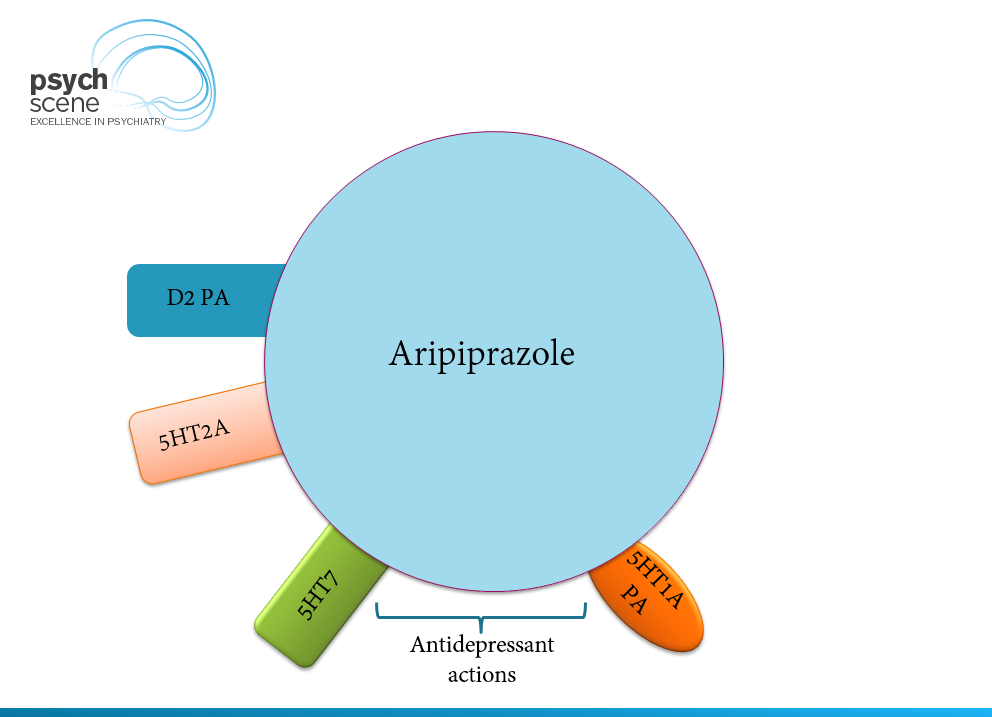 This unique pharmacological profile has led to it being considered a third-generation anti-psychotic.

Because aripiprazole is characterised by its stabilizing effect on dopamine neurotransmission and is thus described as a dopamine-system stabilizer (DSS). [Kikuchi et al., 2021] 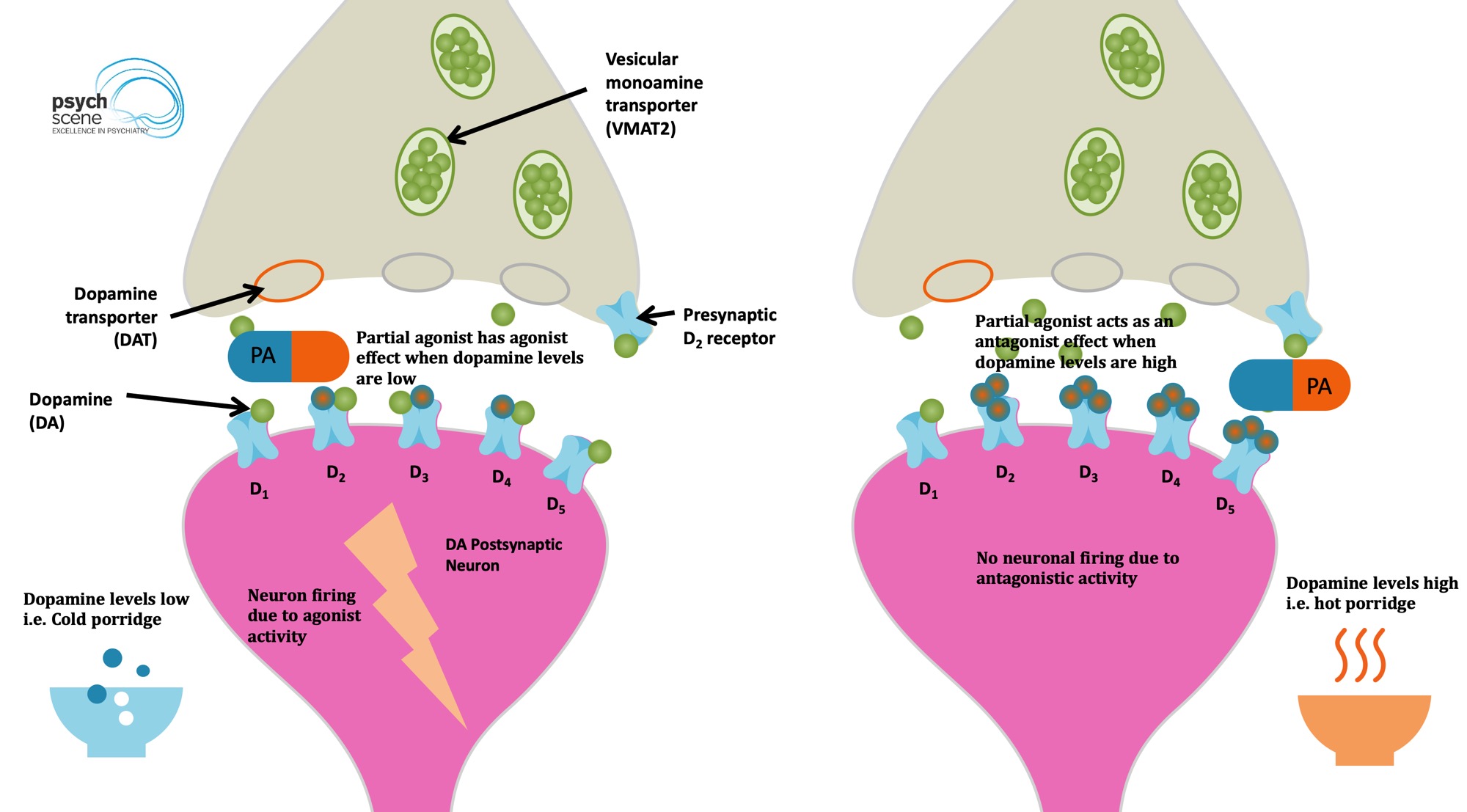 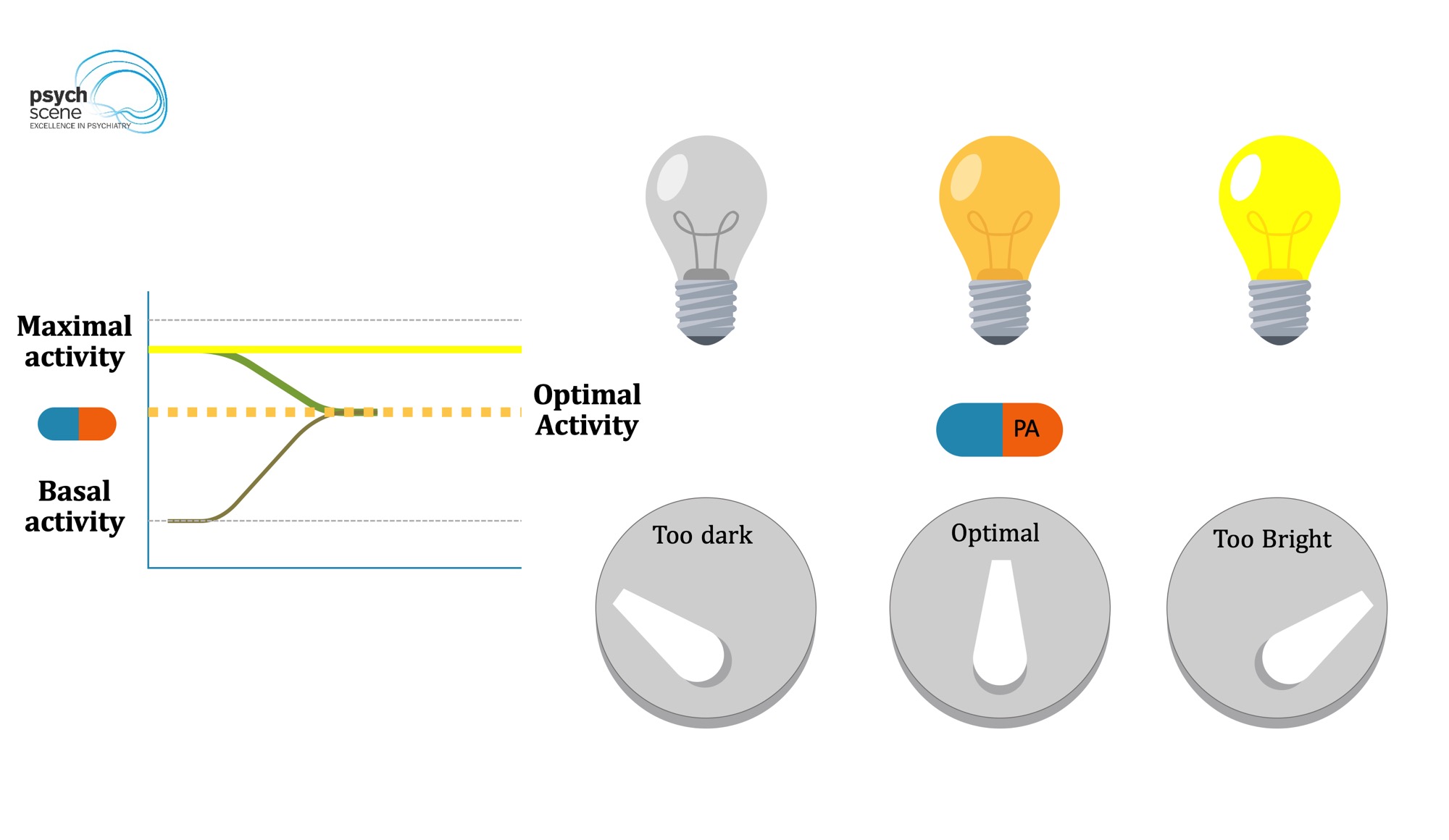 Antagonism of 5HT7 receptors may contribute to some pro-cognitive and antidepressant effects.

The 5HT7 antagonism is an important attribute of vortioxetine which is a novel antidepressant.

Compared with aripiprazole, brexpiprazole has lower intrinsic activity at the dopamine D2 receptor (and thus is expected to cause less akathisia) and has an approximately 10-fold higher affinity for serotonin 5-HT1A and 5-HT2A receptors, also potentially enhancing tolerability and perhaps anxiolytic activity.

The potency and intrinsic activity of brexpiprazole are much higher and slightly lower than buspirone (5HT1A partial agonist).

Due to the equally high affinities for the 5HT1A (partial agonist), 5HT2A (antagonist) and D2 (partial agonist) receptors, Brexpiprazole is an antipsychotic that belongs to a new category of drugs and is classified as a serotonin-dopamine activity modulator (SDAM). [Kikuchi et al., 2021]

Brexpiprazole also has a high affinity for α1B and α2C receptors and acts as an antagonist at both receptors. The α1B antagonism confers prazosin like effects and may explain why brexpiprazole blocks PTSD-like memory while promoting normal fear memory in an animal model. A study showed that adjunctive treatment with brexpiprazole improved treatment-resistant complex PTSD in domestic family violence victims. [O’Connor, 2020]

When cariprazine was compared with aripiprazole for binding to dopamine D2 and D3 receptors, similar D2 and higher D3 antagonist-partial agonist affinity and a 3- to 10-fold greater D3 vs D2 selectivity was observed for cariprazine. 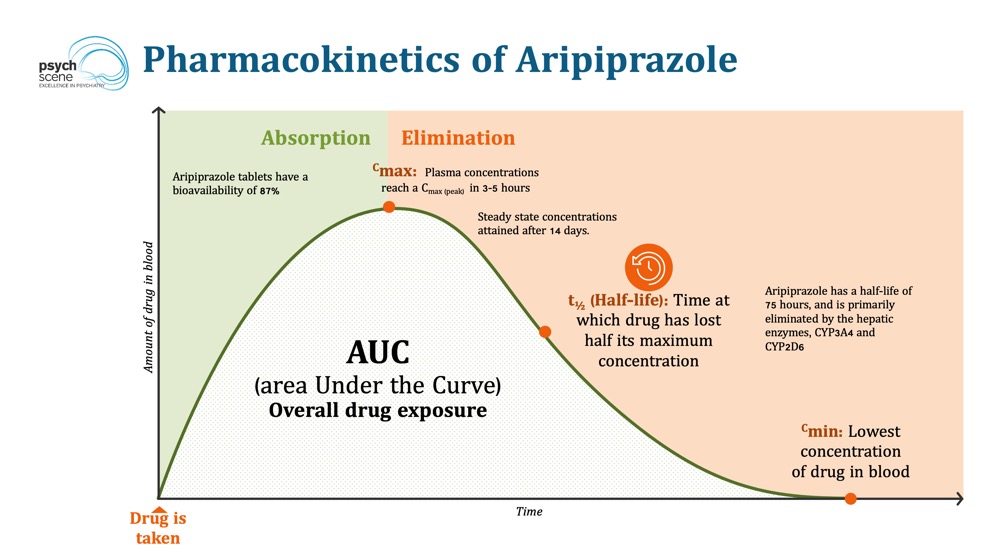 It has a lower risk of extrapyramidal symptoms than other antipsychotics such as haloperidol and there is also significantly less weight gain and a clinically reduced risk of metabolic syndrome compared to olanzapine.

These adverse events have been reported in ≥10% of patients enrolled in clinical trials. 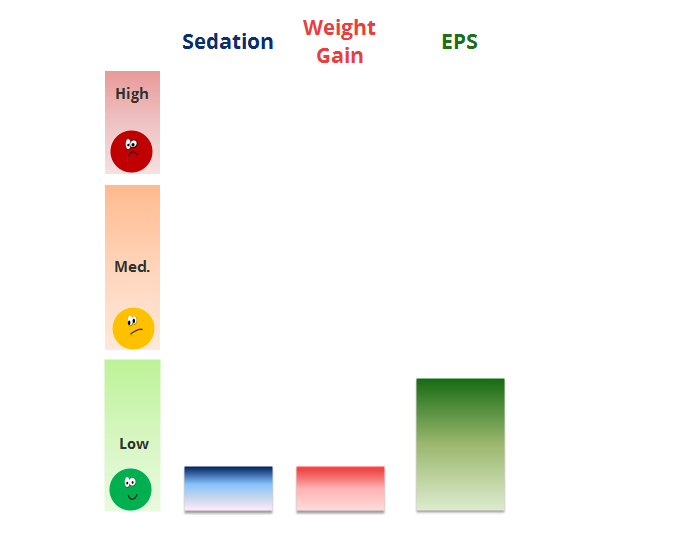 Aripiprazole is approved for the treatment of schizophrenia and bipolar disorder and has the unique property of partial D2 agonism as well as a class antagonist activity at serotonin 5HT2A receptors.

Aripiprazole, a novel atypical antipsychotic drug with a unique and robust pharmacology

Aripiprazole, A Drug that Displays Partial Agonism and Functional Selectivity

Population pharmacokinetic modelling of aripiprazole and its active metabolite, dehydroaripiprazole, in psychiatric patients

Kane J et al. Efficacy and safety of aripiprazole and haloperidol vs placebo in patients with schizophrenia and schizoaffective disorder. J Clin Psychiatry. 2002;63:763–771.

A double-blind, randomized comparative study of aripiprazole and olanzapine in patients with schizophrenia

Efficacy, safety, and tolerability of augmentation pharmacotherapy with aripiprazole for treatment-resistant depression in late life: a randomised, double-blind, placebo-controlled trial

Effect of aripiprazole augmentation of clozapine in schizophrenia: A double-blind, placebo-controlled study

Riedel, M., et al. “Effect of aripiprazole on cognition in the treatment of patients with schizophrenia.” Pharmacopsychiatry43.02 (2010): 50-57.

Aripiprazole in schizophrenia and schizoaffective disorder: A review

BAP guidelines on the management of weight gain, metabolic disturbances and cardiovascular risk associated with psychosis and antipsychotic drug treatment.

The cardiac safety of aripiprazole treatment in patients at high risk for torsade: a systematic review with a meta-analytic approach

Polcwiartek, Christoffer, et al. “The cardiac safety of aripiprazole treatment in patients at high risk for torsade: a systematic review with a meta-analytic approach.” Psychopharmacology 232.18 (2015): 3297-3308.

Aripiprazole in the treatment of Alzheimer's disease

Aripiprazole: a clinical review of its use for the treatment of anxiety disorders and anxiety as a comorbidity in mental illness

Katzman M. Aripiprazole: a clinical review of its use for the treatment of anxiety disorders and anxiety as a comorbidity in mental illness. J Affect Disord. 2011;128:S11-20.