Depressive disorder with mixed features (DMX), also known as a mixed episode, a mixed state or agitated depression, is a term used in the 5th edition of the Diagnostic and Statistical Manual of Mental Disorders (DSM-5) to describe a condition in which the symptoms of mania or sub-syndromal mania occur during the depressive disorders of either Major Depressive Disorder or Bipolar I or II disorder.

Mixed depression deserves its own diagnostic identity, with inner psychic agitation as its central feature, even if the DSM system needs to be overhauled in the process. Only then can we meet Aubrey Lewis’ challenge to be both useful and valid in our nosology. [Koukopoulos A, 2014] 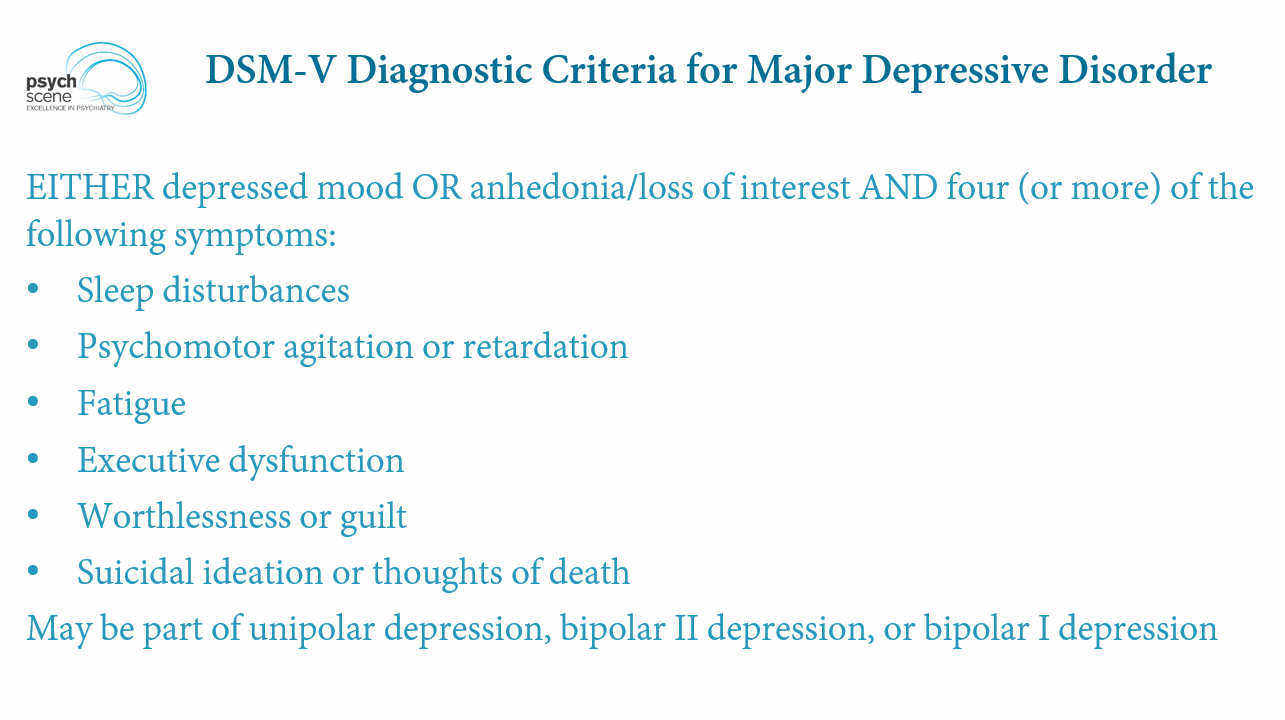 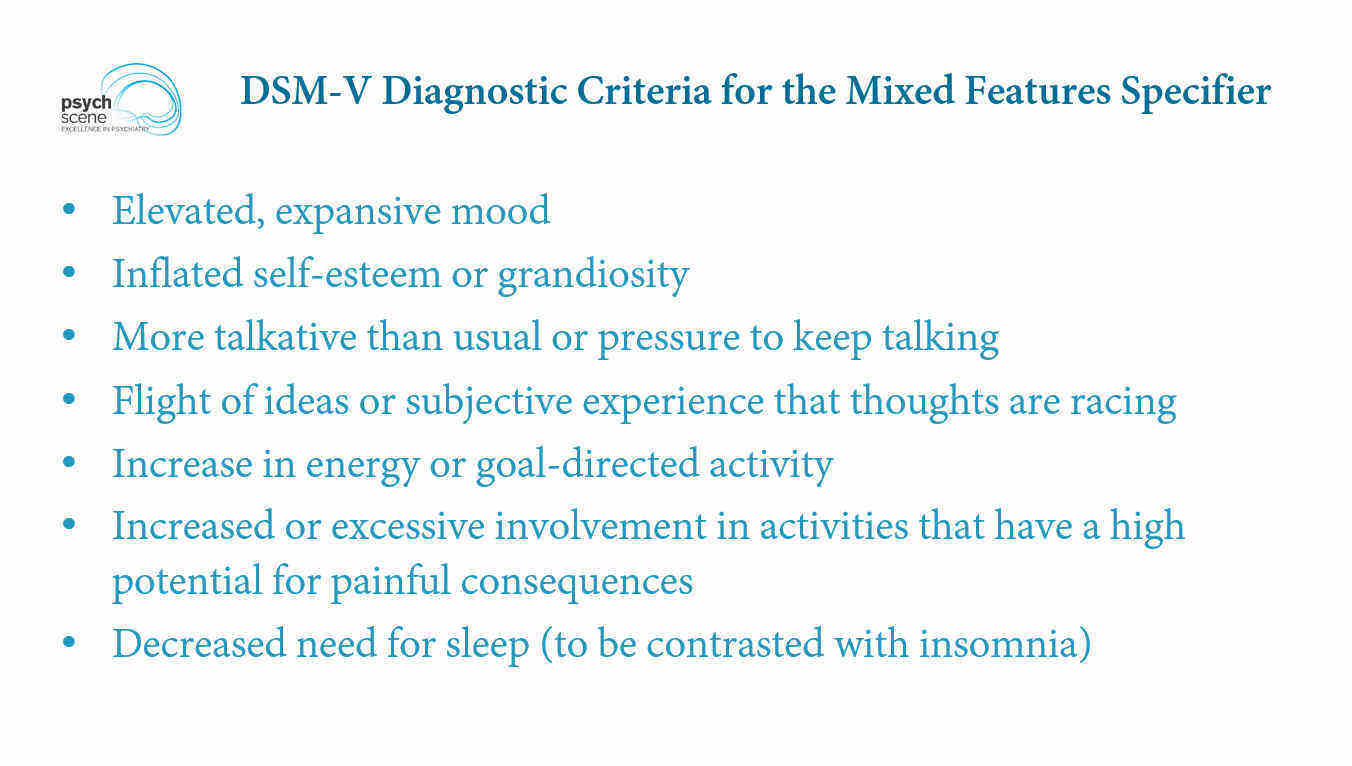 The disorder can be conceptualised as lying at the cusp between depression and mania. 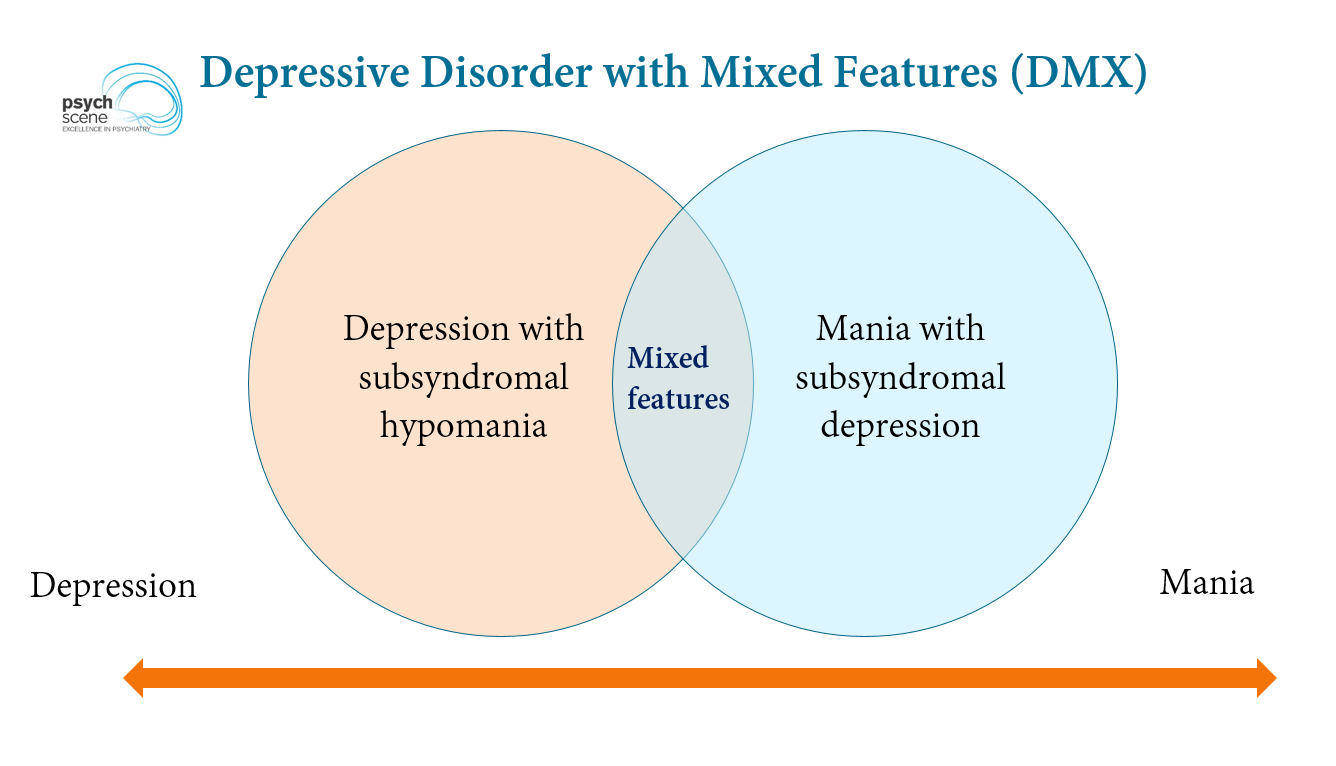 In this article, we summarise the recent guidelines published by Stahl S et al 2017.

Due to the non-specificity of the DSM-5 criteria in diagnosing DMX and the overlap of symptoms in other disorders, alternative criteria have been proposed.

According to Koukopoulos: Along with a major depressive episode, at least three of the following symptoms must be present: 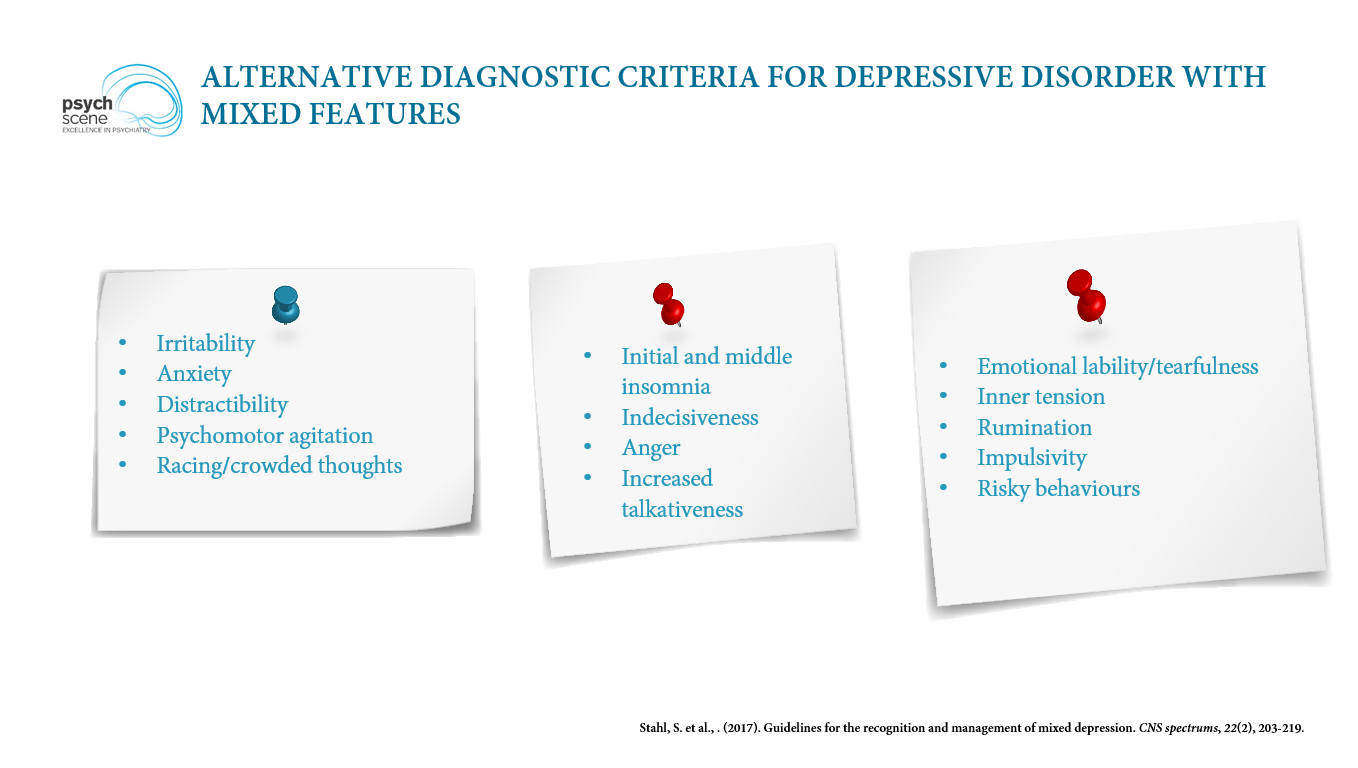 DMX has been associated with:

Scales to assist in the diagnosis of DMX:

Algorithm for the management of DMX 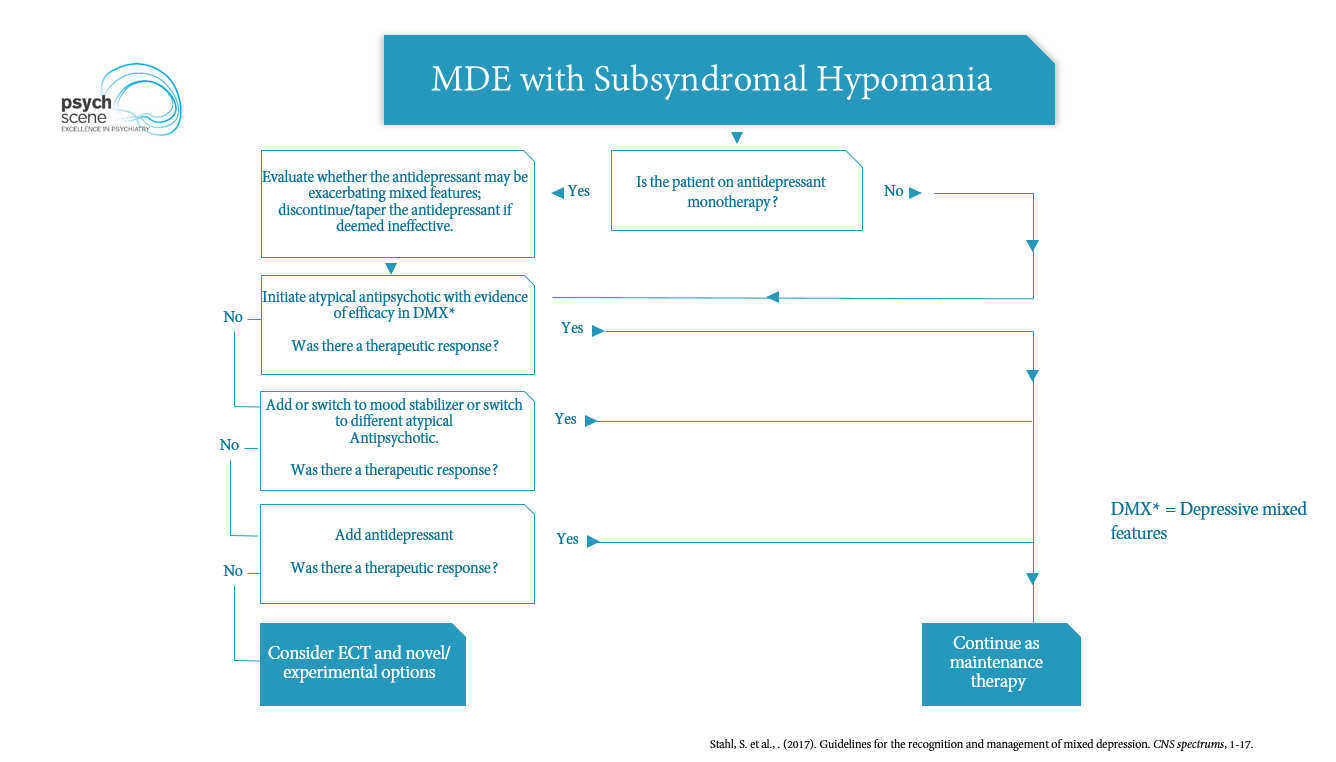 There is uncertainty around the use of antidepressants in patients with mixed depression of any type (unipolar, BP-II, or BP I) due to minimal efficacy but also the potential to worsen the mixed state. 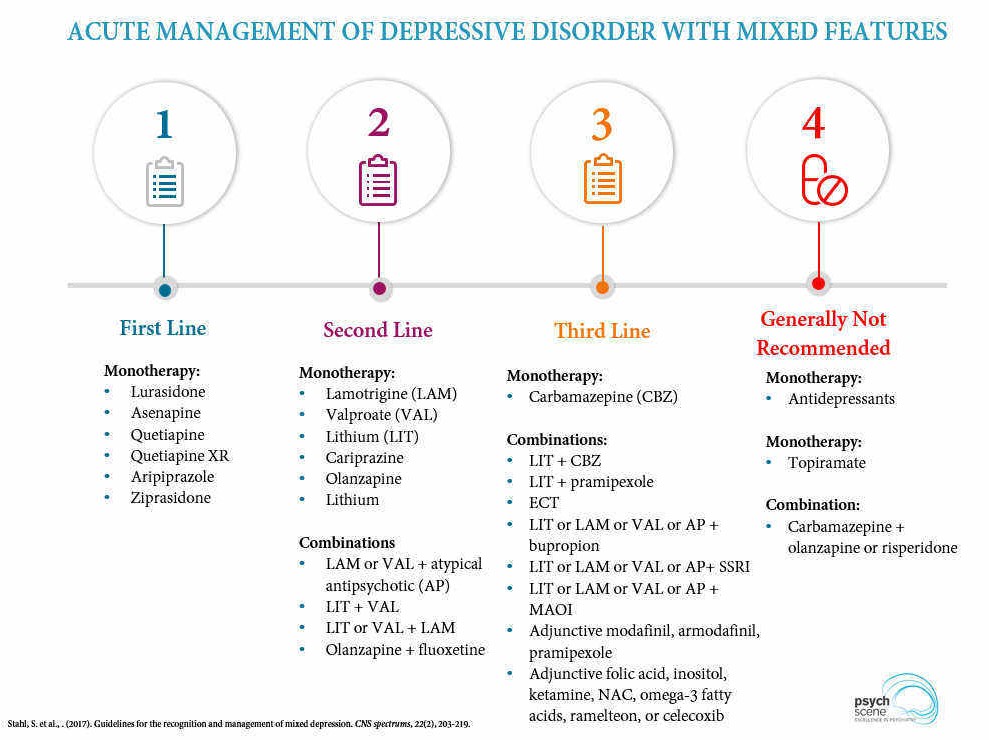 Depressive disorder with mixed features is a condition in which sub-syndromal hypomanic features occur as part of a depressive syndrome.

This condition can easily be missed. Treatment of depressive mixed features with antidepressants has important prognostic implications which clinicians should be aware of. 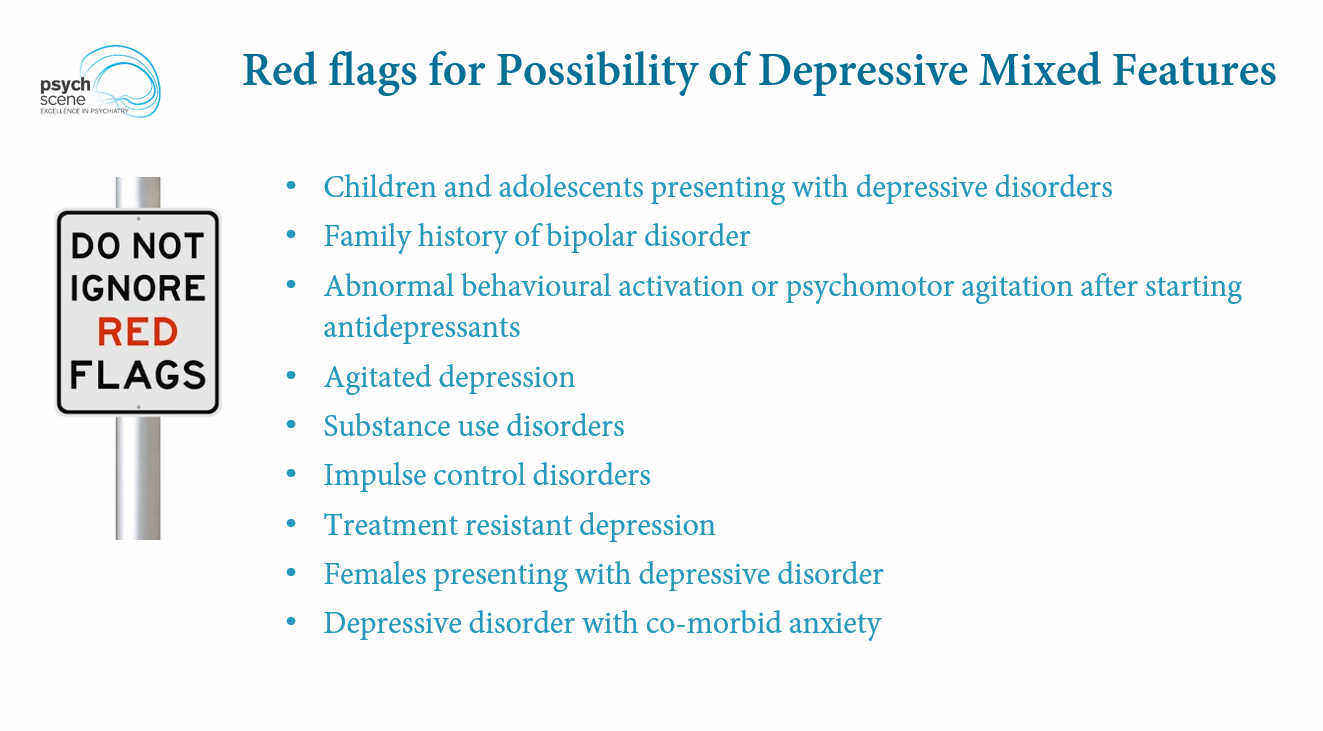 Clinicians should be vigilant for red flags of depressive mixed features, the treatment of which requires mood stabilisers and or antipsychotic medications for optimal outcomes.