In early February 2018, the Australian government published their health spending figures for 2015/2016, which showed that $9 billion was spent on mental health [1]. On average this is $373 per person, and this number has been increasing by 1.4% per annum.

In the context of medical morbidity, depression is a significant contributor to the global burden of disease and is associated not only with an increased health care cost, but more prolonged hospitalisation, poor treatment compliance, and higher rates of morbidity.

The article is a summary of the RANZCP mood disorder guidelines for depression. The article focuses on management of depression in adults and does not include treatment of special groups such as perinatal,  youth, elderly or those with comorbid medical conditions. 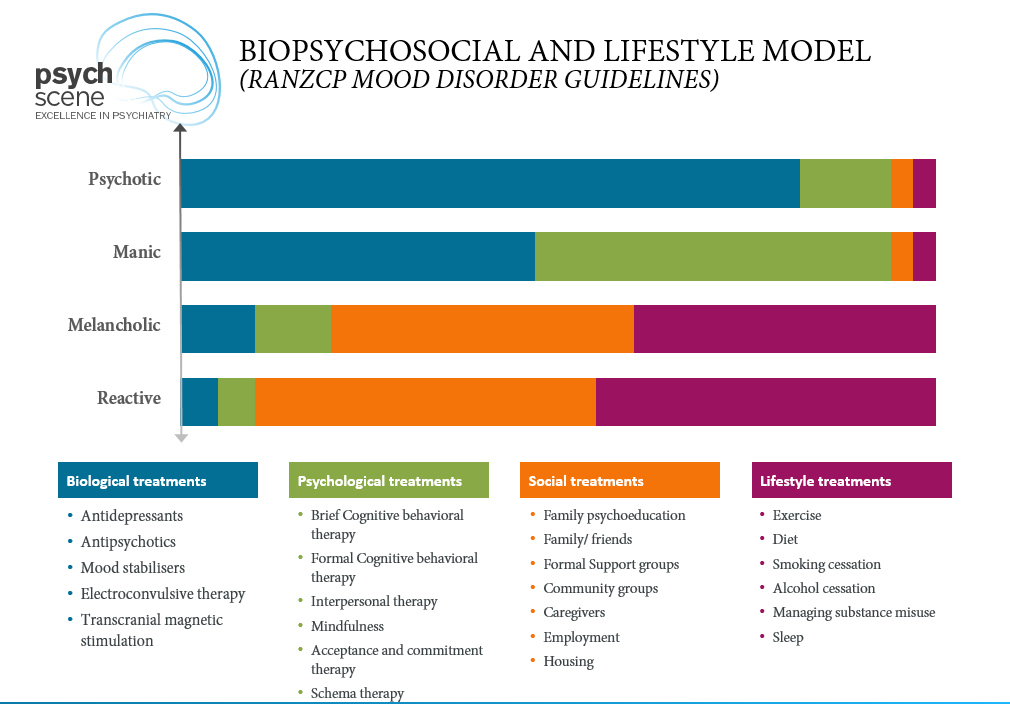 The BPSL model forms the framework for the development of a psychiatric formulation which provides a richer understanding of why the patient has developed the illness now.

This model is broader than the traditional biomedical model with treatments tailored to the individual and the subtype of depression.

The BPSL model can be combined with the 5P formulation model to better understand the genesis of the depressive illness. 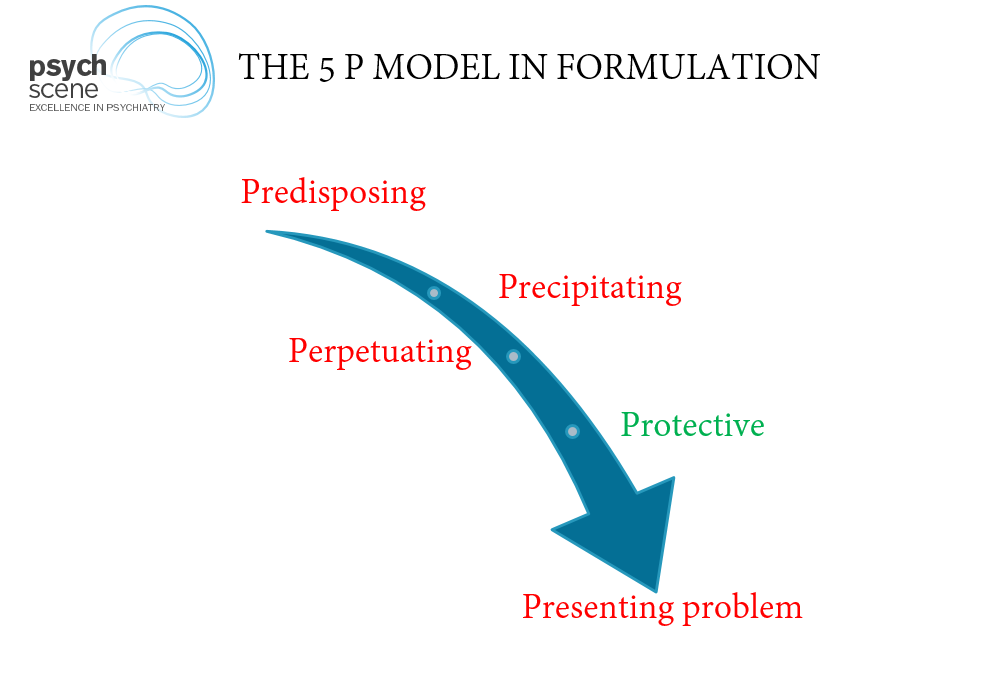 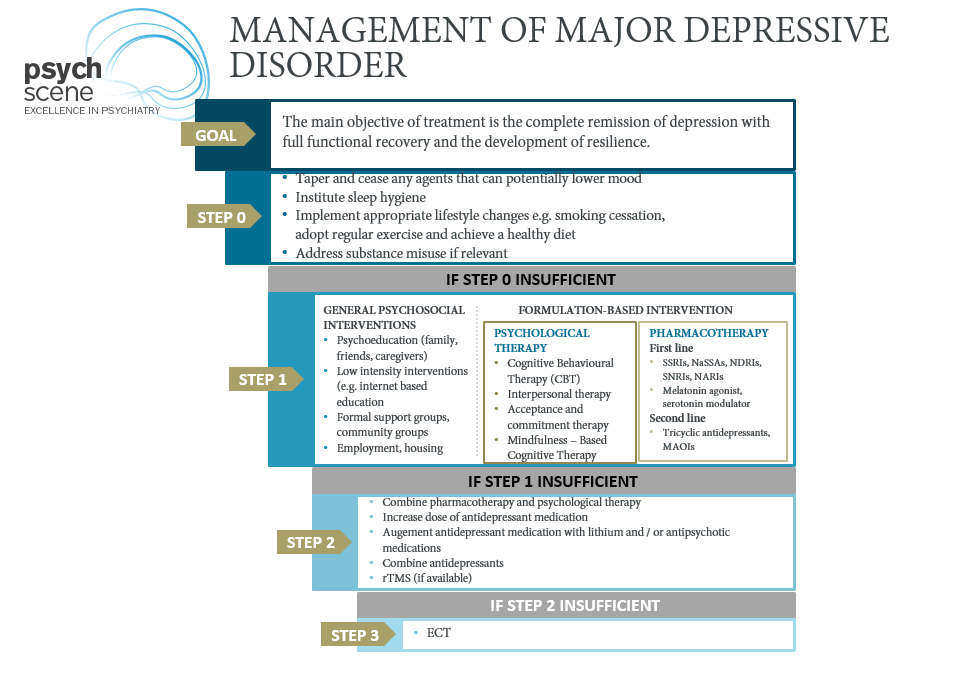 IMPORTANT POINTS IN THE ASSESSMENT OF DEPRESSION

There a number of factors that determine the course of treatment which is most likely to return the patient to their premorbid functioning with an improved resilience against recurrence.

Firstly, the aetiology of depression needs to be considered by taking a longitudinal life course perspective that views the time of onset, previous episodes of depression, and the presence of dysthymia.

Read more about the criteria for depression and the diagnostic interview.

There is a broad range of psychological therapies available in depression:

What does the evidence tell us?

A series of meta-analyses and a network meta-analysis suggest that psychological treatments are equally efficacious in the acute treatment of depression.

There is strong clinical consensus that treatment is best guided by an evidence-based treatment manual, tailored to the individual patient, and with proper attention to the therapeutic relationship.

Psychological therapy should be initiated early in the course of the illness and this can be stand alone (monotherapy). However, if there is minimal response within a reasonable period of time, then pharmacotherapy should be considered. Depending on the severity and symptom profile of the depressed patient, psychological treatment may be best administered after initiating pharmacotherapy, and in thiscontext clinical features such as melancholic features that may predict better response to SSRIs than CBT should be taken into consideration (Simon and Perlis, 2010).

At present, there are no reliable clinical markers for success, and therefore a physician’s judgment is required to be evidence-based.

The choice of antidepressant is usually based on:

Antidepressants are classified based on the mechanism of action including:

There is no significant difference in efficacy between the different antidepressants as shown in meta-analyses.

Antidepressants do differ in tolerability which may inform treatment choice. 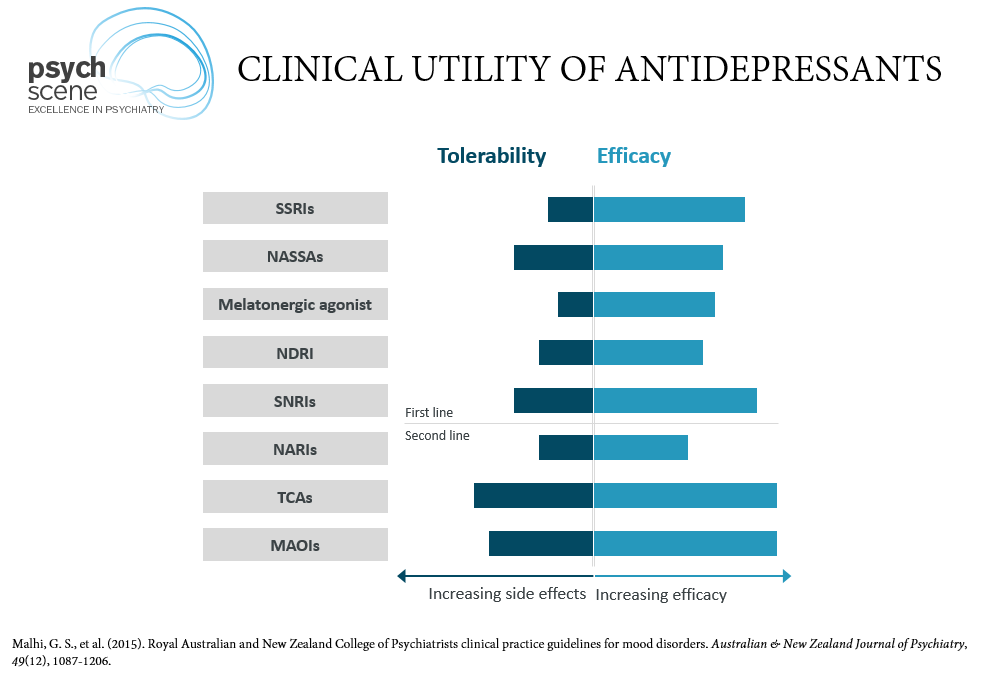 We covered a summary of mechanisms of actions, side effects and indications for the above classes in this article.

We also covered the largest network meta-analysis by Cipriani et al. on antidepressants ranking them according to efficacy and acceptability.

Patients who are prescribed an antidepressant should be carefully monitored in the early phase as a clinical response—at the therapeutic dose—is usually reported within two weeks.

Early follow-ups also allow detection of treatment-emergent suicidality. Therefore, an adequate antidepressant trial should be a minimum of 3 weeks.

If an adequate dose has been found effective, remission usually requires six weeks of treatment.

Once a satisfactory therapeutic response has been achieved, antidepressant dosage should remain the same during continuation and maintenance phases of treatment.
Maintenance antidepressant treatment should be continued for at least six months and up to one-year particularly if episodes have been recurrent.

If there is no improvement in symptoms after 3 weeks, reappraisal and adjustment of the pharmacotherapy should be considered as well as patient treatment adherence.

The STAR*D study showed that after four successive trials of antidepressants a cumulative remission rate of 67% was reached, though it may require 2–3 antidepressant trials before complete remission is attained. [3]

Even with switching to an alternative medication or adding an augmenting agent, only 30% of depressed patients achieve a partial response or remain non-responsive (refractory or treatment resistant).

From an economic perspective, a recent US study showed that treatment resistant depression (TRD) accounts for a large share of the MDD economic burden ($6709 and $9917 higher per patient per year (PPPY) health care costs than non TRD MDD and non-MDD patients respectively with 35.8 work loss days PPPY). 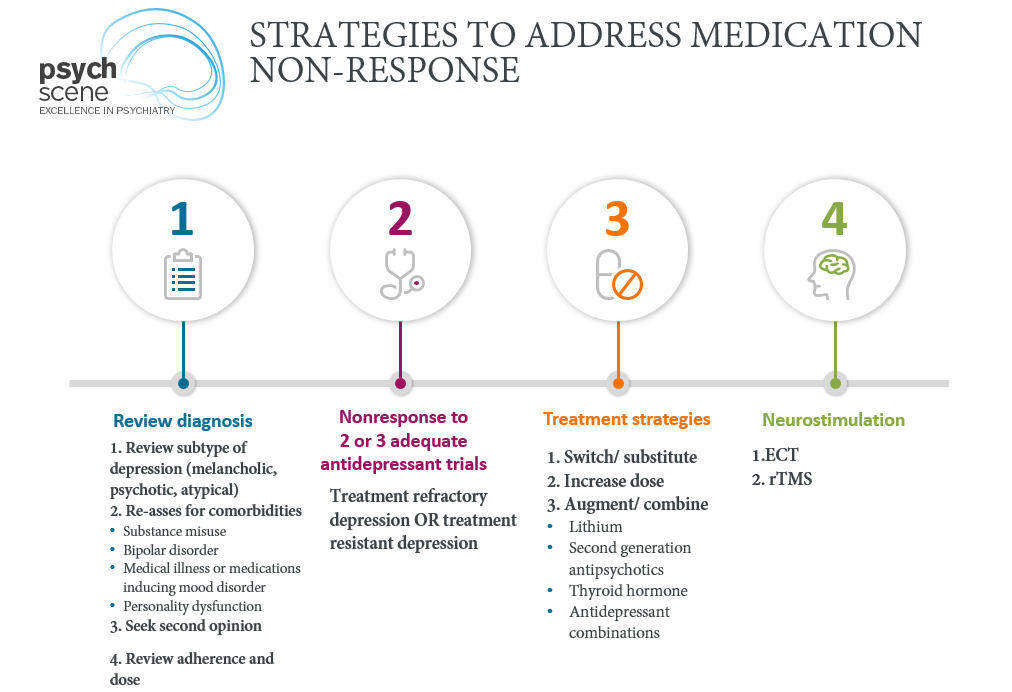 The STAR*D study, an open naturalistic study, showed equivalent remission rates regardless of whether the patient switched from citalopram to bupropion, sertraline or venlafaxine.

There is randomised controlled evidence for improved outcomes with switching from an SSRI to venlafaxine and mirtazapine, and from a tricyclic to an irreversible MAOI, but the evidence for switching from an SSRI to a TCA is inadequate even though clinical experience and expert opinion supports this strategy particularly in more severe depression (Nierenberg et al., 2007)

Three main strategies should be considered when deciding the best way to switch medications. The aim is to minimise any un-medicated interim period and limit the possibility of serotonin syndrome

d. Psychostimulants: There is insufficient evidence to recommend the routine use of psychostimulants as an augmentation strategy.

A large multicentre study of the efficacy of bitemporal ECT showed a remission rate of 95% for completers with psychotic depression.

Response to unilateral ECT in patients with non-psychotic depression who have failed one or more medication trials has been shown to be as high as 48%.

A more recent meta-analysis found remission rates with ECT of 48% for medication refractory patients compared to 64.9% for patients who had not received pharmacological treatment prior to ECT. [4]

ECT should not be regarded a treatment of last resort and its administration should be considered on the basis
of individual patient and illness factors.

Memory impairment is the side-effect of most concern to patients. ECT affects both anterograde and retrograde memory.  Anterograde memory changes generally return to normal or may be improved compared to pre-ECT levels within 2–4 weeks but retrograde impairment,
which is more likely with bitemporal placement, can persist for prolonged periods.

There is a strong association between diet quality and depression. Read more about the SMILES trial by Prof Jacka, an expert advisor for the RANZCP mood disorder guidelines.

Exercise seems to have efficacy as an augmentation strategy in major depression.  A possible mechanism appears to involve brain-derived neurotrophic factor (BDNF). [5]

Smoking is an independent risk factor for mood and anxiety disorders.

A recent systematic review and meta-analysis showed that smoking cessation is associated with reduced depression, anxiety, and stress and improved positive mood and quality of life compared with continuing to smoke. The effect sizes were as large for those with psychiatric disorders as those without and were equal or larger than those of antidepressant treatment for mood and anxiety disorders (Taylor et al., 2014).

There is robust evidence for causal (often bidirectional) links between sleep and negative mood, including major depression.

Clinicians should educate patients about sleep hygiene in depression.

The aim of the summary is to assist busy clinicians in navigating the complexity of managing depression with the goal of reducing the significant disease burden around the world.

This guideline is best combined with the CPD module on Major Depressive Disorder with mixed features which contains mechanisms of actions (MOA’s) and side effects of antidepressants and antipsychotics.

Szuhany KL, Bugatti M and Otto MW (2015) A meta-analytic review of
the effects of exercise on brain-derived neurotrophic factor. Journal
of Psychiatric Research 60: 56–64.