Unipolar or Bipolar Disorder – What’s all the Fuss About?

One of the most common questions in clinical practice posed by colleagues and patients alike is – “Is this Bipolar (Bipolar Disorder) Or Unipolar Disorder (Depression)?”

Differentiating the two poses a clinical challenge. Evidence suggests that misdiagnosis in bipolar disorder is a frequent occurrence.

The absence of biologically-relevant diagnostic markers of BD results in misdiagnosis of the illness as major depressive disorder, or recurrent unipolar disorder (UD) depression, in 60% of bipolar individuals seeking treatment for depression. [1]

In the ANZJP article, the authors Malhi and Porter start the article with the following quote

To the befuddlement of physicists, the universe is expanding; in fact it is accelerating apart at an unbelievable rate ………….While the implications of this are profound, the time frame involved means there is little chance of any direct impact on human kind as we know it. In contrast, another kind of expansion is affecting our lives here and now and also seems to have no end in sight; the diagnostic expansion of bipolarity.” [2]

HOW DO WE CONCEPTUALISE THE DIFFERENCE? 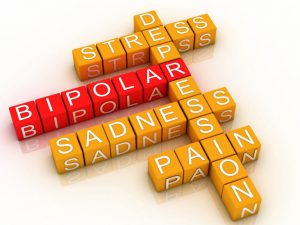 Let’s take a page from Scott Peck (Psychiatrist and author of The Road less Travelled);

Abandon the urge to simplify everything, to look for formulas and easy answers, and to begin to think multidimensionally, to glory in the mystery and paradoxes of life, not to be dismayed by the multitude of causes and consequences that are inherent in each experience — to appreciate the fact that life is complex.

Lets take a look at what depression and mania look like in the brain.

Depression in the Brain [3] 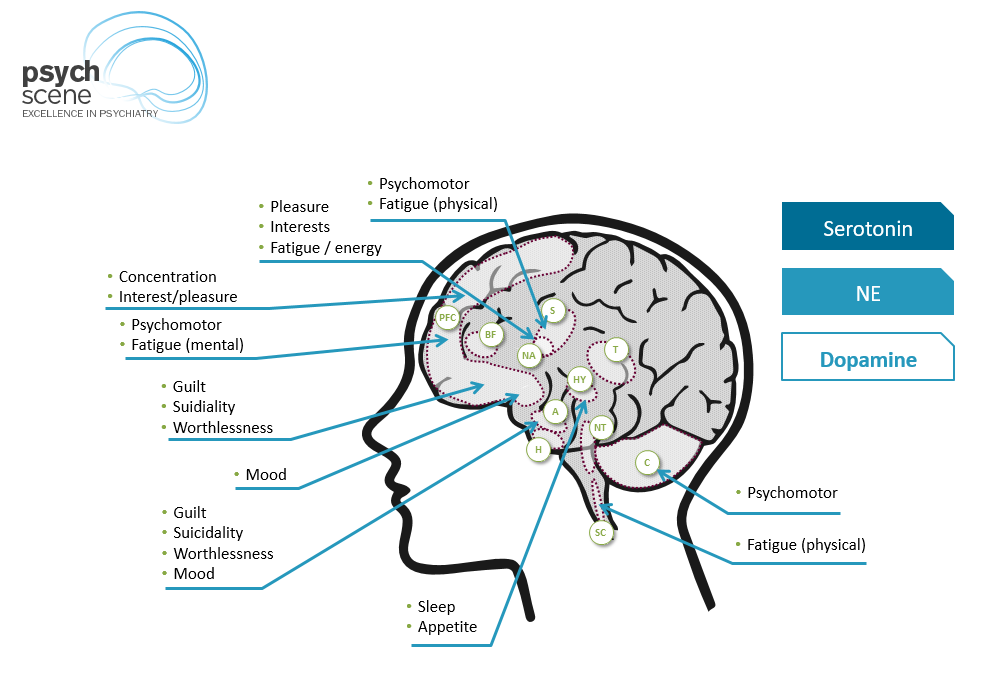 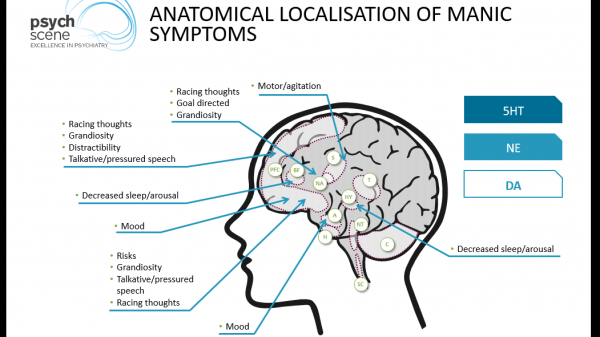 Considering the pathways and, at a minimum, taking into account three neurotransmitters (NE, Serotonin and Dopamine), simple mathematics tells us that if there are 10 pathways involved and you had to pick three pathways (r) from a choice of 10 pathways (n) the number of permutations is equal to 120.

If one were to add additional neurotransmitters (e.g Glutamate, Ach), the possible permutations and combinations increase significantly.

Even to the untrained eye, the above images scream out loud that it is extremely difficult to lump the disorders into Unipolar and Bipolar Disorder. The variables that influence these pathways, notwithstanding the permutations and combinations of the pathways involved, show us that an alternative approach is required in treatment.

Take one example below 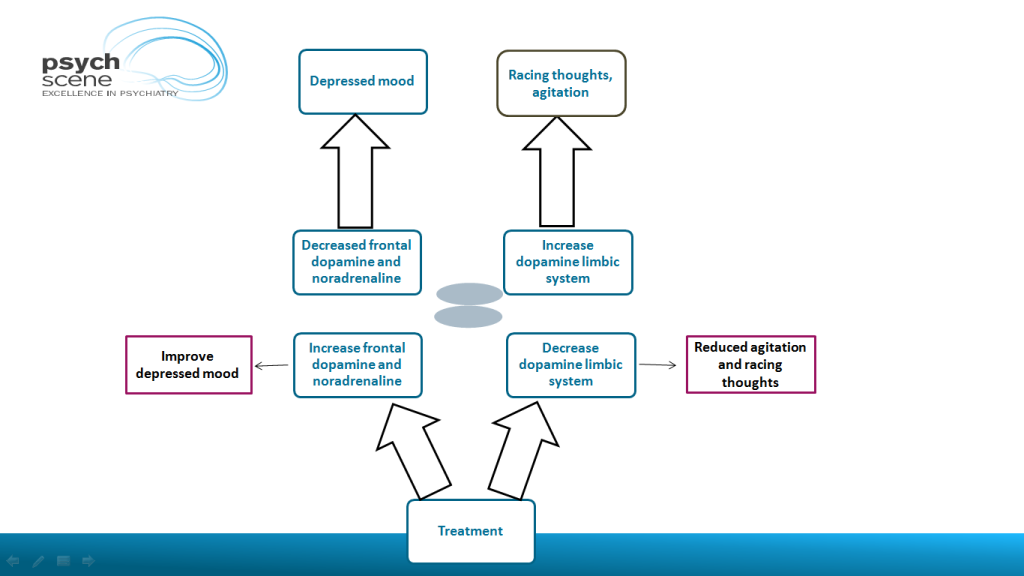 A patient presenting with depressed mood at one point (in this case let’s say due to decreased frontal dopamine and noradrenaline) may very easily have mixed features (racing thoughts, psychomotor agitation, irritability etc.) due to increased dopamine in the limbic system which from a treatment perspective will require treatment of his/her mood state by increasing dopamine in frontal lobe and reduction of racing thoughts, agitation and irritability by reducing dopamine in the limbic system through either dopaminergic blockade (antipsychotic-mood stabilisers like D2-5HT2 blockers) or mood stabiliser GABA potentiators that indirectly have an inhibitory effect on limbic dopamine.

Similarly, depression can occur due to dysregulation of serotonin in the limbic system. It is therefore not surprising that terms like bipolar depression, mixed affective states, atypical depression, major depression with mixed features, cyclothymia, rapid cycling have proliferated to explain these permutations and combinations. What this tells us (especially if they present with no clear cut symptoms of mania or depression) is that the human brain is far too complex to box people into categories.

A diagnostic label is helpful, but one must understand it’s limitations. Osler’s quote comes to mind.

Ask not what disease the person has, but rather what person the disease has.

It is helpful to provide a formulation along with the provisional ‘diagnostic label’ as part of psychoeducation. Treatment can then proceed by neuromodulation and identifying modifiable biological and psychological factors.

In view of the diagnostic complexity, it is thus not surprising that the DSM -5 felt the need to include the disorder – Major Depressive Disorder with Mixed Features.

Mixed features associated with major depressive episode have been found to be a significant risk factor for the development of bipolar I or bipolar II disorder. As a result, it is clinically useful to note the presence of this specifier for treatment planning and monitoring response to treatment.

The WHIPLASHED mnemonic is an excellent tool to aid diagnosis of Bipolar Depression. [4] 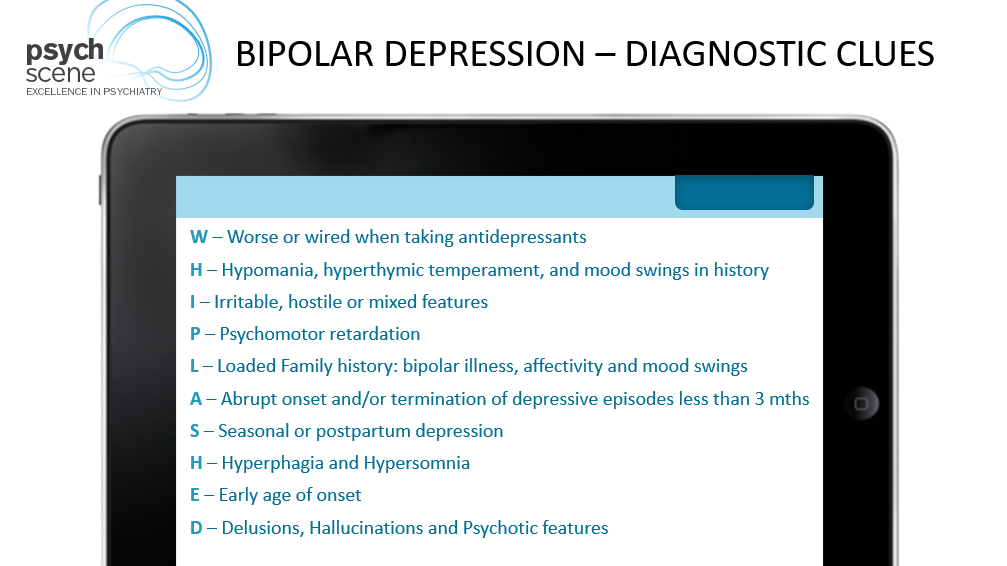 Understanding which patients may have a bipolar trait may –

DON'T GET LOST - GET TO KNOW YOUR LANEWAYS

It is important to remember that the causes of neurotransmitter dysregulation may be due to a multitude of reasons (e.g. thyroxine deficiency, Vit B12 deficiency, frontal injury, vascular factors, etc.).

For example, if the person is deficient in serotonin due to a deficiency in essential elements required in the production of serotonin (e.g. Zinc, Mg, B6 ) or if substances that are required for enhancing sensitivity of serotonin on 5HT receptors are deficient (e.g. Thyroid hormone) then prescribing SSRI’s may not do much as there may not be enough serotonin or in the second case, the receptors are not sensitive enough for the serotonin to act.

It’s like getting to know the neighbourhood laneways.  If you don’t know them well, you won’t be able to help someone who can’t find their way.

WHAT WOULD EINSTEIN DO?

We can take a page about problem-solving from Einstein –

The take home message here is to spend time deciphering the problem. The solution is the end product once the problem is well understood. The issue of causality is particularly important because depression and bipolar disorder can present due to a range of causes and although the same pathways are affected, the causes may be different.

Think of the pathways as a system of interconnected roads. These roads may be blocked by road blocks, falling boulders, flooding, road damage etc. A single broad brush approach will not solve the different problems; in some cases, it may even be dangerous.

The same applies to disorders of the brain. The key is to understand what is affecting these pathways; if it is a neurotransmitter abnormality then psychiatric medications may help. If, however, there are alternate issues, other treatments may be required as we saw here and here. Addressing psychological factors are also important.

Solving such a conundrum in clinical practice requires going back to a basic problem-solving approach. Listen, gather information, build a hypothesis based on possible causality and test the hypothesis. This is what makes a psychiatric formulation powerful in problem-solving.

The article is not intended to deter from diagnosis, but to understand the limitations of a label. A human being is much too complex to explain in a single diagnosis. So the next time you come across this question, it may be OK to step outside the poles.

Want to learn more? Check out how biological deconstruction is used in medical treatment of depression and OCD.

Loading Unipolar or Bipolar Disorder – What’s all the Fuss About?