Principles of Antidepressant Prescribing in Pregnancy and Postnatal Period

Perinatal depression (PPD), or postnatal (postpartum) depression (PND), is the onset of depression during pregnancy or postpartum period.  Cultural and societal expectations can exacerbate new mothers’ maternal demands to form an immediate and strong bond with their baby.

Epidemiological studies show that up to 85% of mothers in Australia will experience some form of baby blues. Symptoms will generally peak on the fourth or fifth day after delivery and remain for a few days. While the symptoms are mild and transient for the majority, some mothers will have persistent symptoms longer than two weeks.

The prevalence of postpartum depression based on a meta-analysis of 59 studies using both self-report questionnaires and diagnostic interviews, was 13%. [O’Hara and Swain, 1996]

When self-report measures are taken out, the prevalence was found to be 7.1%. A recent review looking at prevalence across cultures found rates varying from 4.0–63.9% with Japan and America recording the lowest and highest rates of PND, respectively. [Arifin S et al., 2018]

If PPD is left untreated, there is a high risk of poor maternal health and alcohol and drug abuse. There is also a significant increase in morbidity rates due to self-inflicted injuries. The infant is also likely to have development problems with lower cognitive functioning and adverse emotional and behavioural issues in later life.

Depression during pregnancy has been associated with:

PRINCIPLES OF PRESCRIBING IN PERINATAL AND POSTPARTUM PERIOD - GUIDELINES

1.Explain baseline risks of congenital malformations in the absence of medication.

Whenever psychotropic medication is prescribed to pregnant and breastfeeding women, informed consent should be obtained. In order to obtain informed consent for the provision of pharmacological treatment during pregnancy and breastfeeding, a risk/benefit analysis needs to be performed giving consideration to the risks for the mother as well as the risks to the foetus, and the risks to either of nontreatment. All risks need to be identified and disclosed, both proven and speculative, giving particular consideration to what is of significance to any particular patient. Details of any risk/benefit discussion and the woman’s decision should be carefully documented. [RANZCP Guidelines, 2015]

A careful risk-benefit analysis should be undertaken in planning pharmacological management of a mood disorder in a pregnant woman: specifically, the risks of harm to the developing foetus from pharmacotherapy should be balanced against potential harm to the mother because of not receiving necessary pharmacological treatment for her mood disorder. [RANZCP Guidelines, 2021]

NICE GUIDELINES FOR PRESCRIBING IN PERINATAL AND POSTNATAL PERIOD

History of severe depression who initially presents with mild depression: 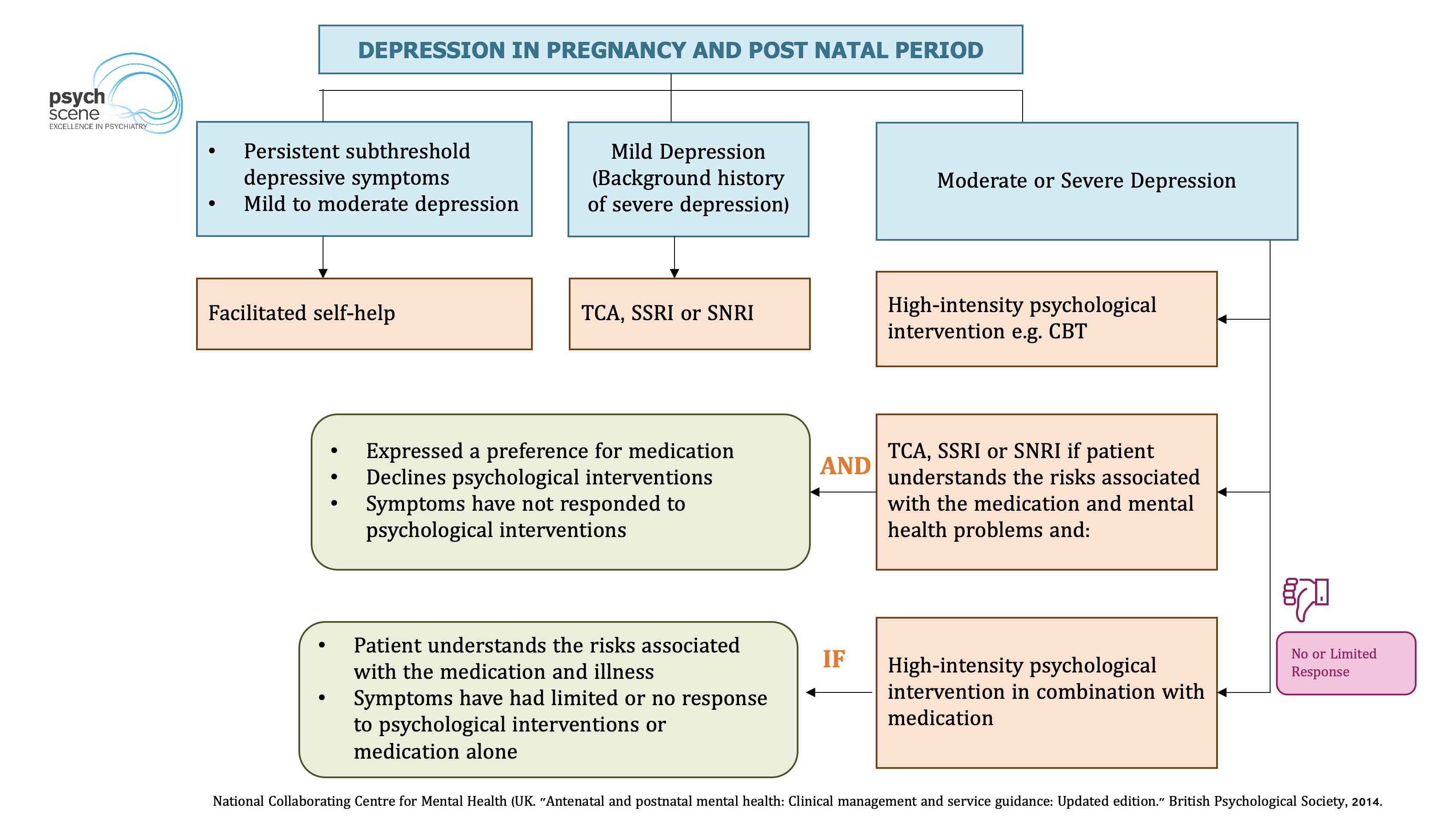 If a woman who is taking a TCA, SSRI or SNRI for mild to moderate depression :

If a pregnant woman is taking a TCA, SSRI or (S)NRI for moderate depression and wants to stop her medication:

Take into account previous response to treatment, stage of pregnancy, risk of relapse, the risk associated with medication and her preference, and discuss with her the following options:

If a pregnant woman is taking a TCA, SSRI or SNRI for severe depression:

Take into account previous response to treatment, stage of pregnancy, risk of relapse, the risk associated with medication and her preference, and discuss with her the following options: 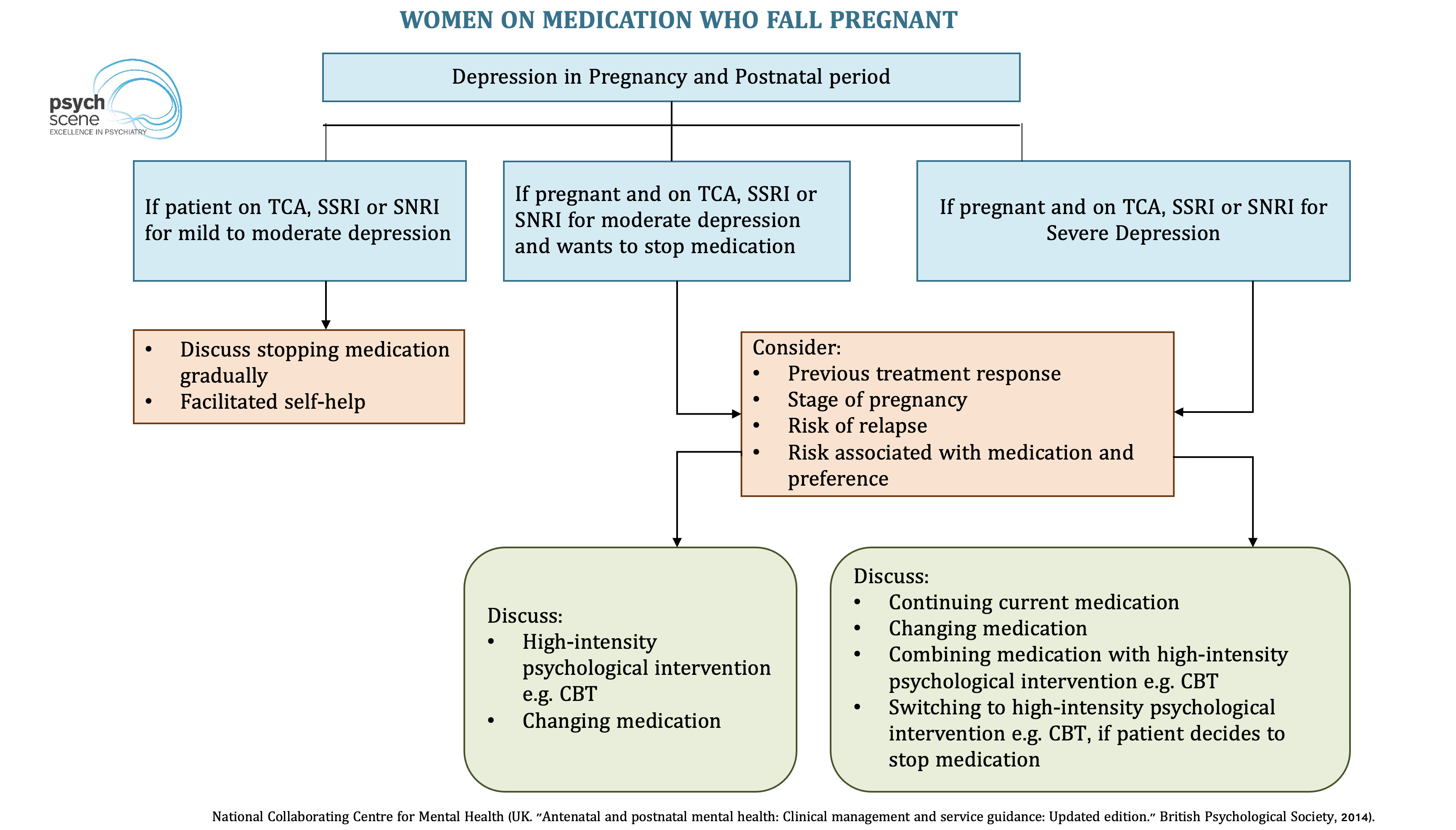 Spontaneous abortion rates in confirmed early pregnancy are 10-20%, and the risk of spontaneous major malformations is approximately 3% (approx 1 in 40 pregnancies). [ACOG Practice Bulletin No. 200], [Abeywardana and Sullivan, 2008]

The following points have been summarised from Maudsley guidelines, RANZCP and NICE guidelines and recent research papers. [Maudsley Guidelines, 2018]

We found some associations between maternal antidepressant use and specific birth defects. Venlafaxine was associated with the highest number of defects, which needs confirmation given the limited literature on venlafaxine use during pregnancy and risk for birth defects. Our results suggest confounding by underlying conditions should be considered when assessing risk. Fully informed treatment decision-making requires balancing the risks and benefits of proposed interventions against those of untreated depression or anxiety.

To date, there have been no reports of mirtazapine causing major malformations. [Smit et al., 2016]

Little information is currently available regarding the safety of some of the newer antidepressants, such as agomelatine and vortioxetine. [Niethe & Whitfield, 2018]

Websites such as the Pregnancy and Breastfeeding Medicines Guide can assist in making a risk-benefit analysis for patients.

Rates and risk of postpartum depression

Review of the prevalence of postnatal depression across cultures

Is cognitive behavioral therapy a better choice for women with postnatal depression?

The Maudsley prescribing guidelines in psychiatry

SSRI and SNRI use during pregnancy and the risk of persistent pulmonary hypertension of the newborn.

Use of antidepressants near delivery and risk of postpartum hemorrhage

Antidepressant use and risk for preeclampsia.

Mirtazapine in pregnancy and lactation

Psychotropic medication use during pregnancy