Over the past few decades, Selective Serotonin Reuptake Inhibitors (SSRIs) have become one of the most commonly prescribed medications to treat various mental health conditions, such as anxiety, depression, and obsessive-compulsive disorder (OCD).

Despite their widespread use, the exact mechanism of action of SSRIs has remained somewhat of a mystery.

In recent years, researchers have made great progress in uncovering the molecular pathways involved in SSRI action, providing valuable insight into their therapeutic effects.

In this article, we will discuss the latest updates on the mechanism of action of SSRIs, including how they interact with serotonin receptors, modulate neurotransmitter levels, and how they affect the brain’s reward system.

The serotonergic hypothesis of depression postulated that diminished activity of serotonin pathways plays a causal role in the pathophysiology of depression. This hypothesis led to the development of SSRIs and SNRIs in the treatment of depression.

Both SSRIs and SNRIs are effective medications in the treatment of depression. [Cipriani Network Meta-analysis]

See Simplified guide on antidepressants and Guidelines on the management of depression.

The hypothesis has now moved towards recognising the role of serotonin and its complex actions at cellular and molecular levels.

Serotonin synapses are present brain wide, and consist of 14 different receptor types which are encoded by seven gene families.

Here we describe the key postulated mechanisms of action of SSRIs.

It examined the role of serotonin in regulating behavior, and how its spatial distribution and receptor types can affect brain-wide activity and behavior. The key findings were: 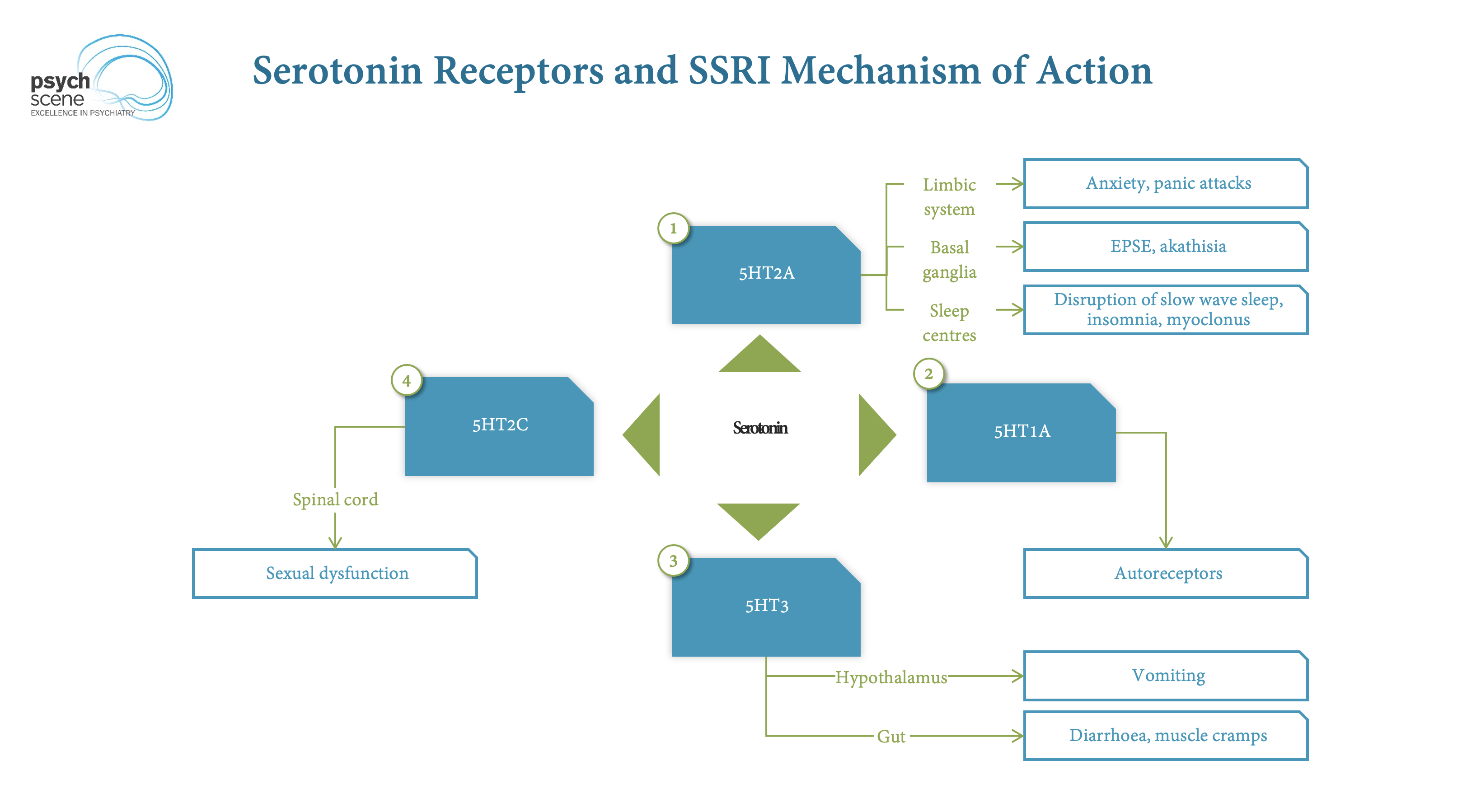 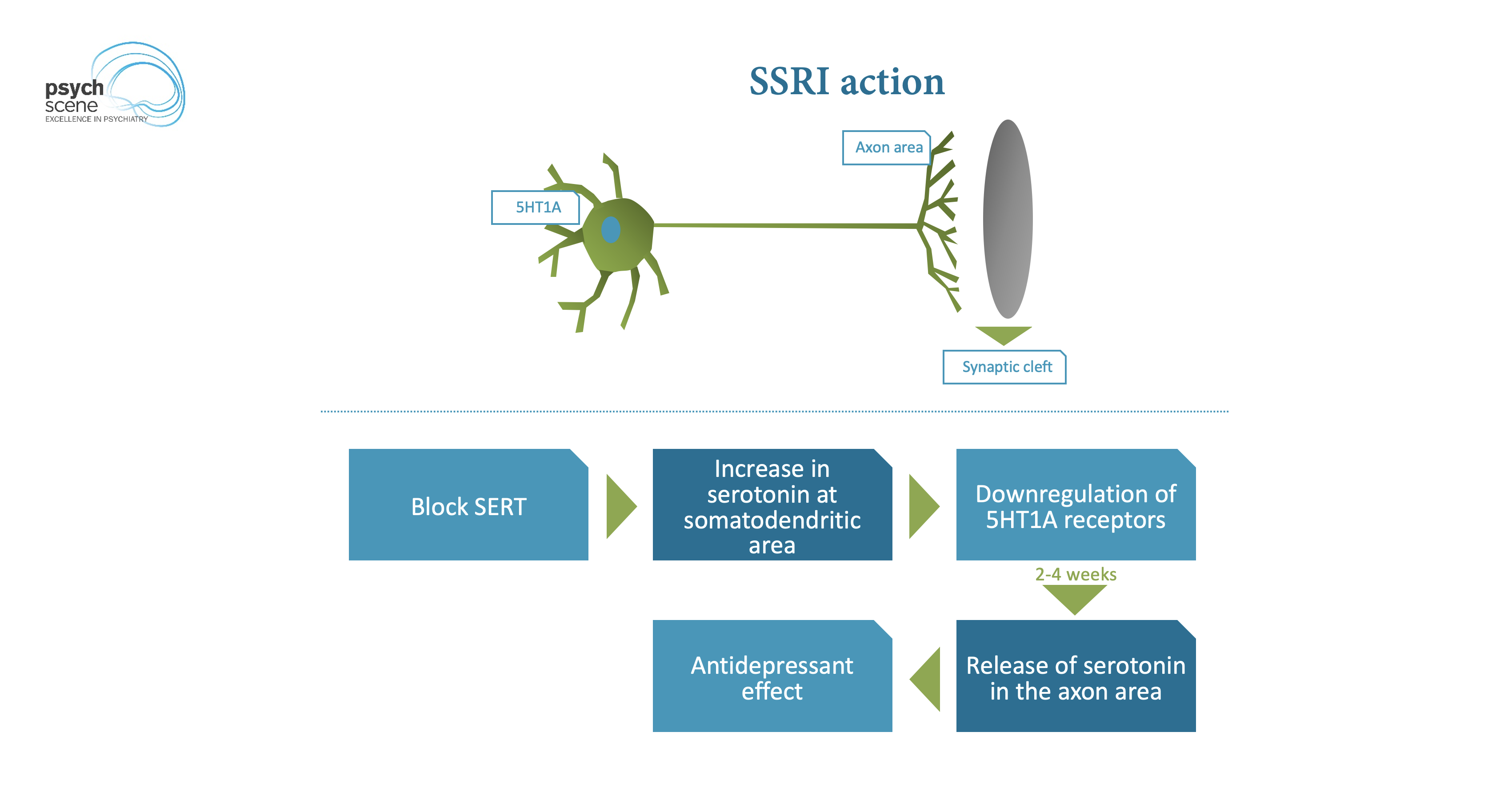 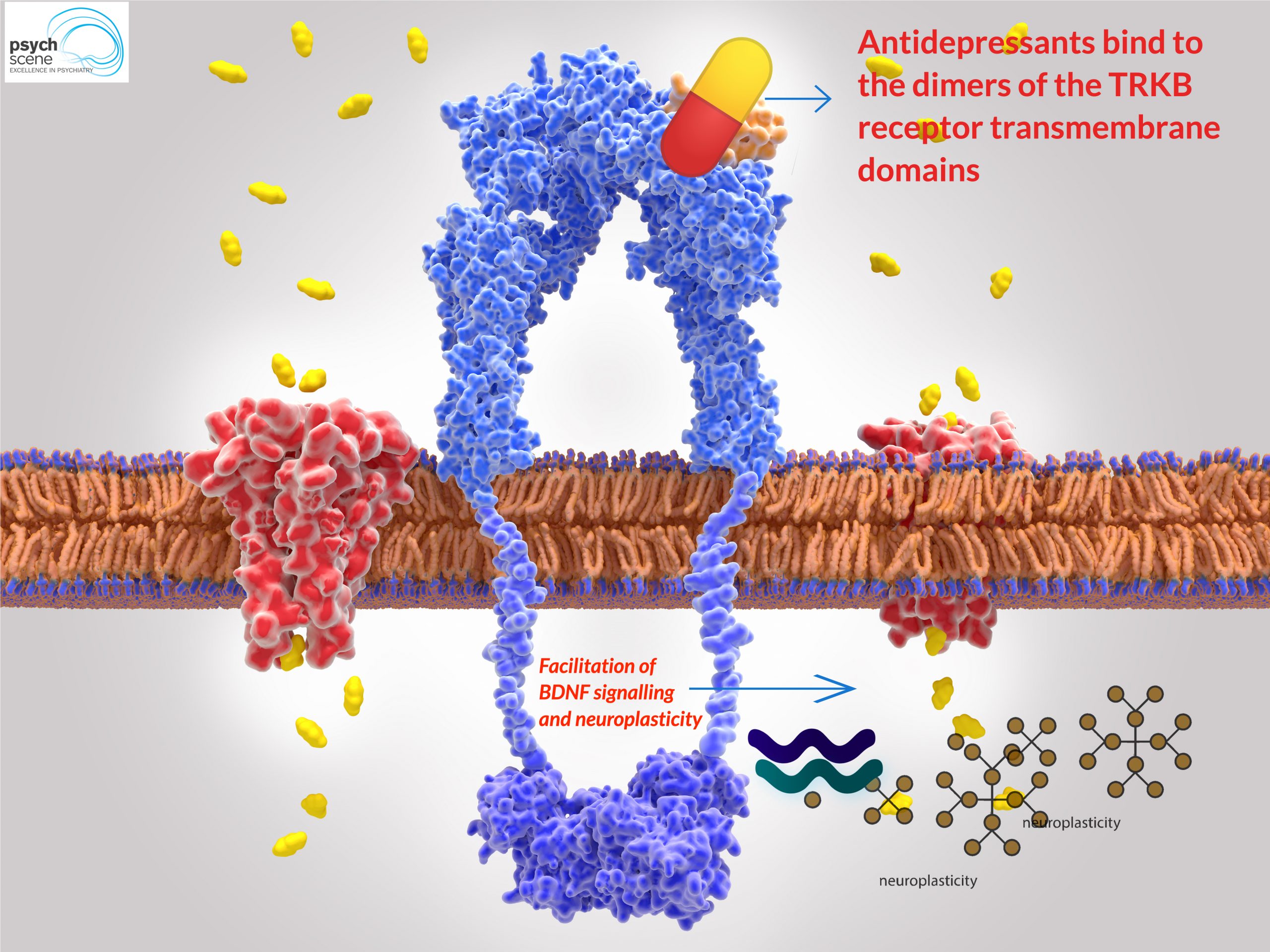 5-HT1A receptors are a major target for SSRI-induced increases in adult hippocampal neurogenesis which is correlated with antidepressant response.

A proposed model looking at SSRIs and downstream effects are as follows : [Samuels et al., 2015]

Astrocyte dysfunction has recently been proposed to contribute to the pathogenesis of depression through several mechanisms: [Vecchia et al., 2021]

Evidence has mainly focused on the astrocytic inward rectifier potassium channel 4.1 (Kir4.1 channel) as a possible contributor to depression. The channel is an important modulator of neuronal excitability and glutamate metabolism.

Serotonin can communicate with and modulate Kir4.1 activity although the exact interaction and effect are still a matter for further research. Evidence shows that Kir4.1 inhibition increases astrocyte secretion of BDNF.

SSRIs inhibit Kir 4.1 activity. Fluoxetine and sertraline displayed a stronger, voltage-independent effect, with respect to fluvoxamine, which instead inhibited Kir4.1 in a voltage-dependent manner.

In summary, SSRIs may have additional effects that are yet to be discovered beyond the serotonergic hypothesis of depression.