1. Bipolar Disorder – always ask patients if they have had a manic or hypomanic episode

2. Borderline Personality Disorder – duration of low mood is not sustained and mood instability is prominent.  Both depression and Borderline personality disorder may co-exist.

Cannabis is associated with  “amotivational syndrome”

OCD can lead to secondary depression

1.If patient has had experiences of low mood all their life, then consider the possibility of Borderline Personality Disorder or Dysthymia

4. Vascular depression is associated with White Matter Hyperintensities (WMH’s) as shown in the below image. These can impact on cognitive function making the individual more vulnerable to stressors. It is important to treat vascular risk factors such as Diabetes, Hypertension and address smoking and alcohol use. 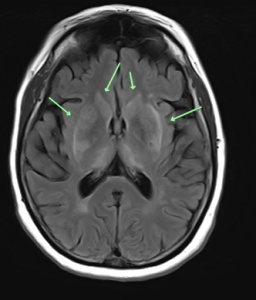