Up to 30% of patients with schizophrenia are classed as non-responders to antipsychotics. [Hasan et al., 2012].

There are three key tenets. 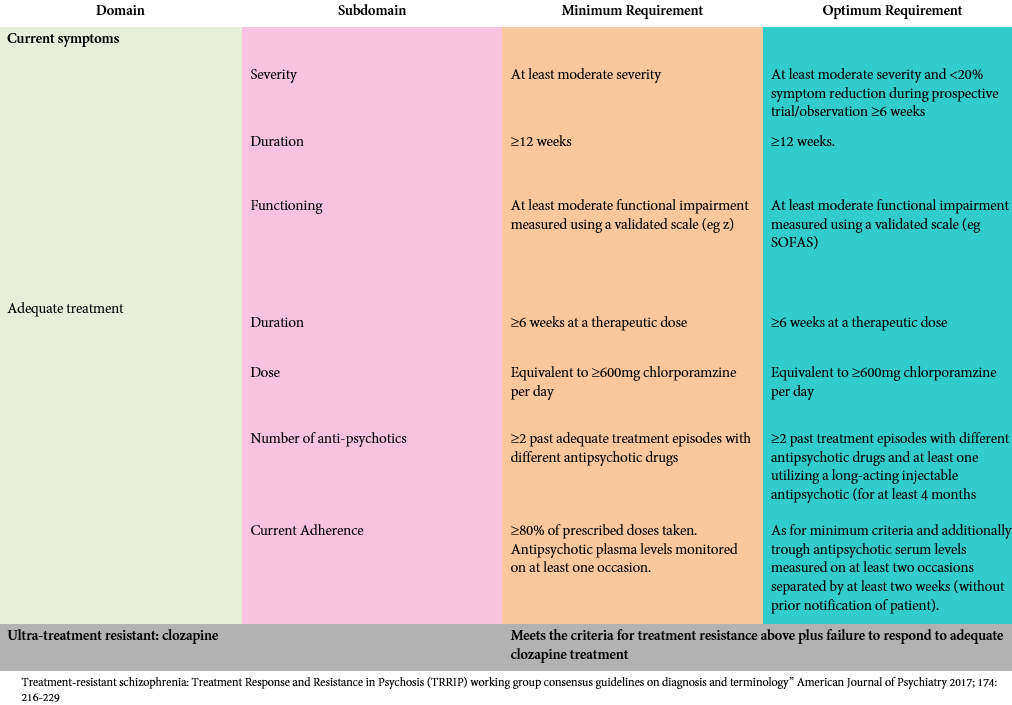 Clozapine is an evidence-based treatment in TRS.

Clozapine was superior to other antipsychotics in improving total symptoms in both TRS (g = 0.34; 95%CI, 0.13–0.56) and non-TRS (g = 0.20; 95%CI, 0.08–0.32) studies. Furthermore, clozapine was superior in improving positive symptoms in both study groups, but not for negative symptoms. These findings do not support a subtype of schizophrenia which respond specifically to clozapine. Clozapine is more effective than other antipsychotics irrespective of treatment-resistance, arguing for its use more generally in schizophrenia. [Mizuno et al, 2019]

There is evidence that clozapine initiation is delayed in clinical practice, and early treatment with clozapine in TRS is associated with better outcomes.

Mechanism of action of clozapine

Optimising Drug Treatment for Psychosis: Using What We’ve got Better – Role of Clozapine.

Up to 40% of patients do not respond to clozapine treatment, and up to 70% of patients will only exhibit a partial or limited response. A partial response criterion is quantified as only a 20-30% reduction in Brief Psychiatric Rating Scores (BPRS) or PANSS scores [Porcelli et al. 2012].

Delay in the initiation of clozapine is associated with a poorer response to clozapine, raising the possibility of a critical period for initiation (2.8 years). [Yoshimura et al., 2017]

Clozapine resistance occurs despite a dosage of 300 to 800 mg/day, with blood tests revealing adequate plasma drug levels of 350 to 420 ng/mL.

Some studies have suggested that there are late responders and that a period of 3 to 6 months is necessary [Rosenheck et al. 1999]; however, others have rejected the delayed-onset hypothesis.  [Agid et al. 2003]

However, the criteria for clozapine-resistant schizophrenia have been defined [Mouaffak et al. 2006]:

Although there are notable barriers to treatment with clozapine, the co-prescription rates in Australia were reported to be as much as 85% in 2012—this suggests that clinicians show a reasonably aggressive tendency to augment clozapine in patients that exhibit signs of clozapine-resistant schizophrenia.[Pai et al. 2012]

The study included benzodiazepines, anti-metabolic agents and anticholinergic, which may be prescribed for side effects rather than a true pharmacological augmentation for enhancing clozapine efficacy.

A recent Finnish study showed that Antipsychotic polypharmacy (APP) may be associated with significantly lower psychiatric hospitalisation risk due to any psychiatric and nonpsychiatric reasons and may also reduce mortality more than treatment with antipsychotic monotherapy. [Tiihonen et al., 2019]

In principle, when considering combining antipsychotics, it would make the most sense to combine agents with different pharmacodynamic dopamine actions, such as combining a full antagonist with a partial agonist, or a tight D2 binding agent with one with less potent D2 binding (such as quetiapine or clozapine). [Guinart and Correll, 2020]

See this interview with Prof Correll on the augmentation of Lurasidone and Clozapine.

Prof Bloom talking about strategies for non-responders with Clozapine.

Smokers were less likely to reach therapeutic levels. Smoking cessation may benefit by counteracting the cardiovascular risks and pharmacokinetic interactions with polyaromatic hydrocarbons.

Individuals on clozapine who underwent regular occupational therapy sessions, either alone or in a group, were shown to have improved social skills, with a postulated “improvement in executive function” over a period of 6 months.

EVIDENCE FOR CLOZAPINE AUGMENTATION STRATEGIES FROM A META-REVIEW

Wagner and colleagues recently published a meta-review that outlined a clinical strategy to treat clozapine-resistant schizophrenia using The Scottish Intercollegiate Guidelines Network (SIGN) [Wagner et al. 2019]. SIGN was formed in 1993 and was designed to reduce variation in clinical practice.

This meta-review included 21 publications on clozapine resistance, and each publication was reviewed using the SIGN criteria to determine scientific validity prior to grading (Grade A-D): (Read more about grading criteria)

Lithium is a proven mood stabiliser that may also reduce the incidence of clozapine-induced neutropenia. Clozapine augmentation with lithium has been shown to significantly improve total and positive symptoms but not for negative symptoms. [Siskind et al. 2018]

Improvement in global scores and reduced verbal aggression as an augmentation agent.

Not been found to confer any superiority as an augmentation strategy [Correll et al. 2017].

Augmentation with rTMS requires more research as there is a lack of high-quality RCTs. Only one pilot trial has shown that there were improvements in general psychopathology in clozapine resistant schizophrenia. [de Jesus et al. 2011]

Treatment resistance and inadequate response to clozapine treatment is a considerable clinical problem for a significant proportion of TRS patients. The disparity between clinical practice and recommended guidelines has resulted in uncertainty in the appropriate strategy to augment clozapine therapy.

According to the RANZCP guidelines –

Clozapine has had some – even modest – benefit, augmentation is justifiable, although the evidence for this strategy is equivocal. On an individual level, the addition of a high affinity dopamine D2 blocking agent such as risperidone or amisulpride to clozapine can be effective for residual positive symptoms. [RANZCP guidelines in Schziophrenia]

The current body of evidence doesn’t endorse any single approach and instead argues that any combination or augmentation trial should be systematically researched a priori and incorporate the unique cost-benefit ratio for each patient.

The critical treatment window of clozapine in treatment-resistant schizophrenia: Secondary analysis of an observational study.

How long to wait for a response to clozapine

Delayed-onset hypothesis of antipsychotic action: a hypothesis tested and rejected.

Mouaffak A et al., Augmentation strategies of clozapine with antipsychotics in the treatment of ultra-resistant schizophrenia. Clin Neuroppharmacol. 2006;29:28-33.

Augmentation of clozapine with another pharmacological agent: Treatment for refractory schizophrenia in the ‘real world’. Acta Psychiatr Scand. 2012;126:40

Antipsychotic polypharmacy in schizophrenia: why not?

Spina E et al., Plasma concentrations of clozapine and its major metabolites during combined treatment with paroxetine or sertraline. Pharmacopsychiatry. 2000;33:213

Augmentation of clozapine with electroconvulsive therapy in treatment resistant schizophrenia: A systematic review and meta-analysis

HDAC2 as a new target to improve schizophrenia treatment.

Cognitive behavioural therapy for auditory hallucinations in schizophrenia: A review.