What is Neuroplasticity? – A Simplified Guide

Neuroplasticity is best defined as the ability of the nervous system to change its activity in response to intrinsic or extrinsic stimuli by reorganising its structure, functions, or connections. [Mateos-Aparicio & Rodríguez-Moreno, 2019]

These changes can either be beneficial (restoration of function after injury), neutral (no change), or negative (can have pathological consequences).

Neuroplastic changes can be divided into three depending on whether they occur at a molecular, cellular or synaptic level. 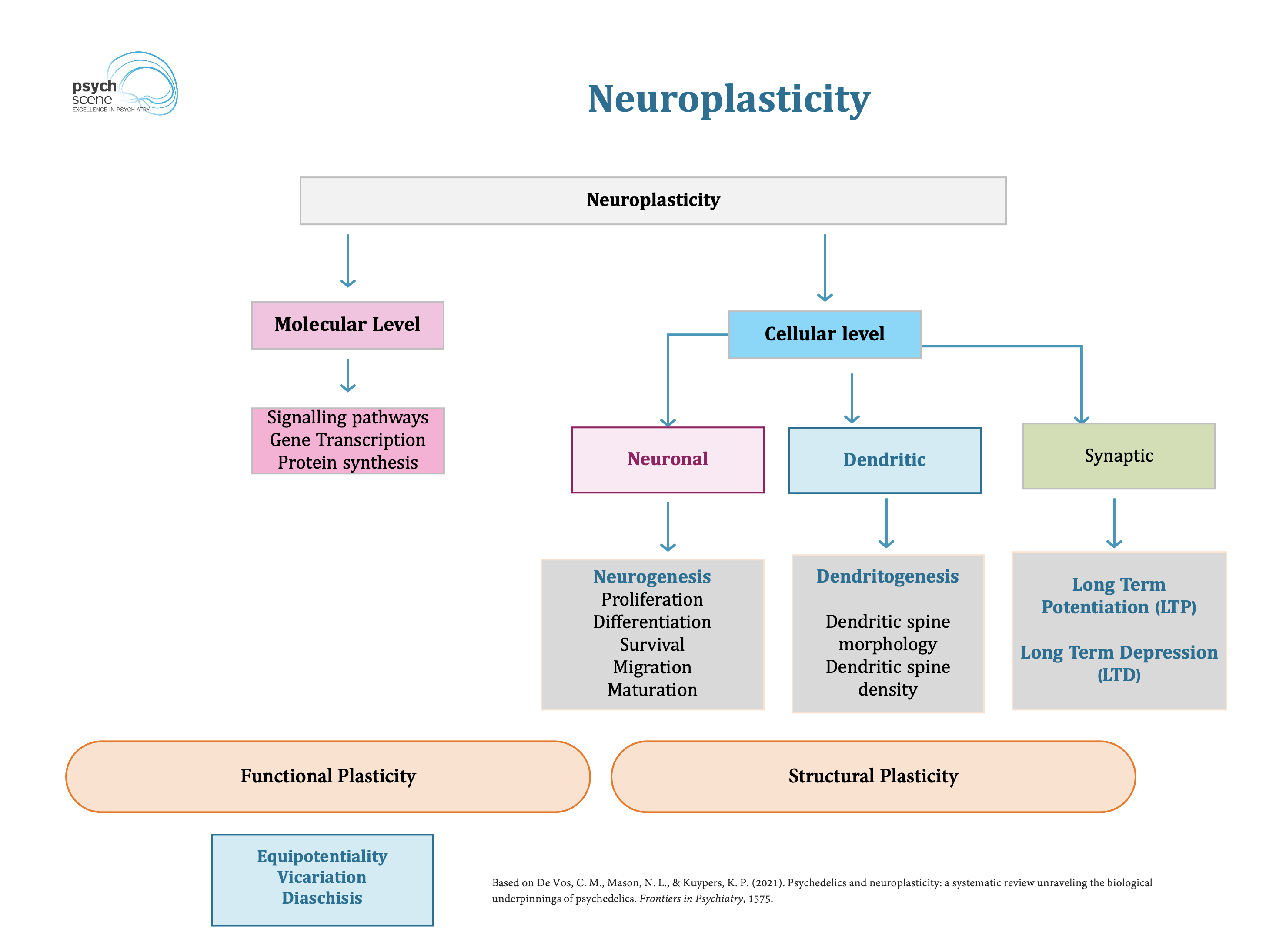 Neuroplasticity can be broken down into two major mechanisms: [Puderbaugh & Emmady, 2021.]

The first mention of the term plasticity in regards to the nervous system was made by William James in 1890. However, the term neural plasticity/ neuroplasticity is credited to Jerzy Konorski in 1948 and was popularised by Donald Hebb in 1949.

In summary, neuroplasticity is essential for learning and memory processes that allow an organism to learn and adapt to its environment. At present, there is considerable interest to harness evidence-based interventions in clinical practice to improve human wellbeing and longevity.

ADULT NEUROGENESIS IN HEALTH AND DISEASE

A fundamental mechanism of neuroplasticity in the adult brain is neurogenesis, which describes the birth of new neurons in two regions of the brain: the hippocampus and the olfactory bulb. [Zhao et al. 2008]

Neurons are continuously generated from a proliferating population of neural stem cells (NSCs) that then become incorporated into the existing neuronal circuitry.

The process of neurogenesis is regulated by the environment and an individual’s experiences and physiological status. Injury and disease can also induce migration of neural stem cells to the site of injury, where they may be appropriately incorporated into established circuits.

The majority of psychiatric and neurological disorders have been associated with changes in neuroplasticity, including reductions in neurogenesis and deficits in long-term potentiation. Furthermore, aberrant neurogenesis can also promote the destabilisation of neuronal circuits and contribute to cognitive impairment. [Mu and Gage 2011]; [Cho et al. 2015] 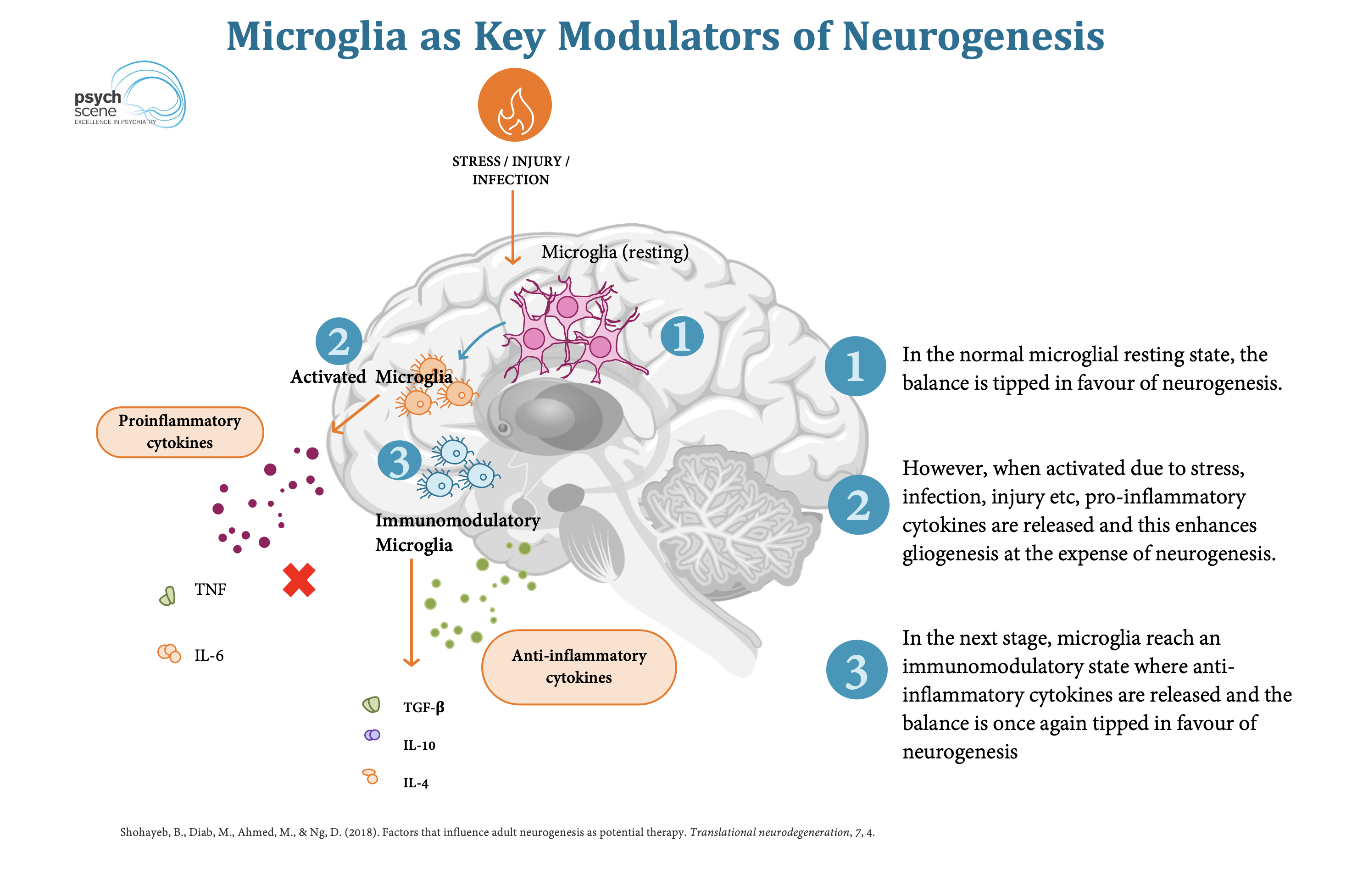 Identifying appropriate environmental and behavioural signals that promote neurogenesis in different regions of the adult brain could potentially assist in developing neurotherapeutics that enhance the brain’s innate plastic capacity to adapt after neuronal injury or disease. [Voss et al. 2017]

Cognitive neurotherapeutics is a novel treatment approach that may treat or prevent a variety of neurological and psychiatric disorders.

Both EPO and EPOr are widely present in the brain. Expression of EPO receptor is significantly increased in neurons, glia, and endothelial cells after TBI.

Neuroplasticity can best be defined as changes in the brain in response to intrinsic or extrinsic stimuli. These changes may be functional or maladaptive.

Neuroplastic changes occur in several neurological and psychiatric disorders. However, the best-studied is traumatic brain injury.

There is increasing interest in modulating these neuroplastic pathways as treatment options in neuropsychiatry.

Finally, if cognitive neurotherapeutics are to be used to harness the neuroplastic potential of the human brain, then age, sex, genetics, and individual pathology will need to be considered before implementation.

Strategies such as sleep hygiene, diet, exercise are low-cost ways of ‘enhancing neuroplasticity’.

As research continues, we may be able to utilise these treatments further to help guide the brain back to health.

The Impact of Studying Brain Plasticity

Neuronal plasticity in the septal nuclei of the adult rat

Prevalence, incidence, and factors associated with pre-stroke and post-stroke dementia: a systematic review and meta-analysis

Post-stroke cognitive decline: an update and perspectives for clinical research

Dynamic Brains and the Changing Rules of Neuroplasticity: Implications for Learning and Recovery

Brain training in children and adolescents: is it scientifically valid?

Concepts of CNS plasticity in the context of brain damage and repair.

Psychedelics and neuroplasticity: a systematic review unraveling the biological underpinnings of psychedelics

Inflammation is detrimental for neurogenesis in adult brain.

Neurogenesis and exercise: past and future directions

Effects of Physical Exercise on Neuroplasticity and Brain Function: A Systematic Review in Human and Animal Studies.

Environmental enrichment and the sensory brain: the role of enrichment in remediating brain injury

Healthy aging diets other than the mediterranean: a focus on the Okinawan diet.

Nehlig A. (2013). The neuroprotective effects of cocoa flavanol and its influence on cognitive performance. Br. J. Clin. Pharmacol. 75 716–727

The Glymphatic System: A Beginner's Guide.

Is sleep essential for neural plasticity in humans, and how does it affect motor and cognitive recovery?.