Anti-NMDA-receptor antibody (Anti-NMDA-R ab) encephalitis is an important differential diagnosis of psychosis, being first demonstrated in young women with ovarian teratomas. Anti-NMDA-R abs, however, have been shown to be present in the serum of patients with neurodegenerative disorders such as Creutzfeldt-Jakob disease as well as schizophrenia (Greta-Arribas, Titulaer, Torrents et al. 2014). This case highlights the interesting dilemma of a patient who presented with alcohol-related brain damage but had serum Anti-NMDA-R abs and an ovarian cyst.

A 60-year-old female of European background was admitted to a Neuropsychiatry Unit with a history of sub-acute onset of leg weakness, ataxia, confusion and poor self-care on a background of heavy periods of alcohol intake; drinking up to 4 L of cask wine per day.

Her presentation was characterized by disinhibition, disorientation, paranoid themes, confabulation and an extremely impoverished ability to learn and retain new information. Her language skills were intact.

Neurological examination yielded no ophthalmoplegia. However, dysdiadochokinesis, past pointing, and lower limb ataxia were present. There was no autonomic instability.

Further collateral history revealed multiple past presentations to the hospital with alcohol-related medical complications (pancreatitis, seizures) as well as episodes of acute confusion.

The clinical history and neuropsychological profile were in keeping with repeated episodes of subacute Wernicke’s Encephalopathy now culminating in a Korsakoff Syndrome. Read about Wernicke’s and Korsakoff’s Syndrome.

MRI Brain showed diffuse atrophy with chronic white matter ischaemic changes (Figures 1 and 2). This is in keeping with long-term alcohol use and cerebrovascular disease. 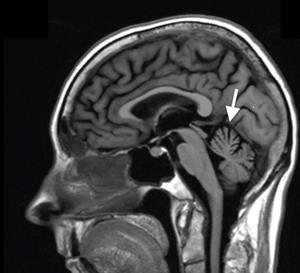 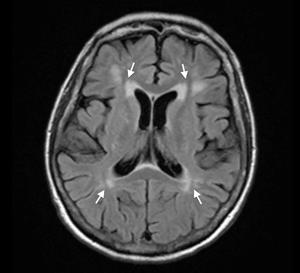 SPECT showed no diagnostic features of a neurodegenerative process

The patient was managed for behavioral disturbances with regular diazepam titrated up to 15 mg / day and olanzapine titrated up to 25 mg / day. Diversion techniques such as music therapy were also useful.

The case was discussed with the neurological team, who stated there were no clinical signs of Anti-NMDA-R ab encephalitis, however, CSF testing of Anti-NMDA-R abs would be more definitive. Given the patient’s mental state, she would have required a general anaesthetic to undergo lumbar puncture. The possibility of lumbar puncture and a trial of immunotherapy and consideration of surgical excision of the ovarian cyst if anti-NMDA-R abs were detected in the CSF was discussed with her guardian who declined further investigation.

The patient’s presentation remained stable, and she was transferred back to her local hospital. She was referred to the local gynaecology service for surveillance of the ovarian cyst.

The false-positivity rate of serum Anti-NMDA-R abs is reported to be 0.4 – 3 % (Greta-Arribas, Titulaer, Torrents et al. 2014). False-positive rates decrease with the use of multiple detection techniques and CSF testing.

Diagnosis and significance of antibody titers in anti-NMDA receptor encephalitis