A Focus on Vortioxetine – Psychopharmacology | Mechanism of Action | Clinical Application

Vortioxetine is an atypical antidepressant with a multimodal activity. It is a serotonin modulator and stimulator because although it has SERT inhibition properties, it is also a serotonin receptor agonist and antagonist.

It also exerts effects on noradrenaline, dopamine, glutamate, GABA, and the cholinergic system.

Traditionally, antidepressant research has focused on the development of drugs that bind to the serotonin transporter (SERT). 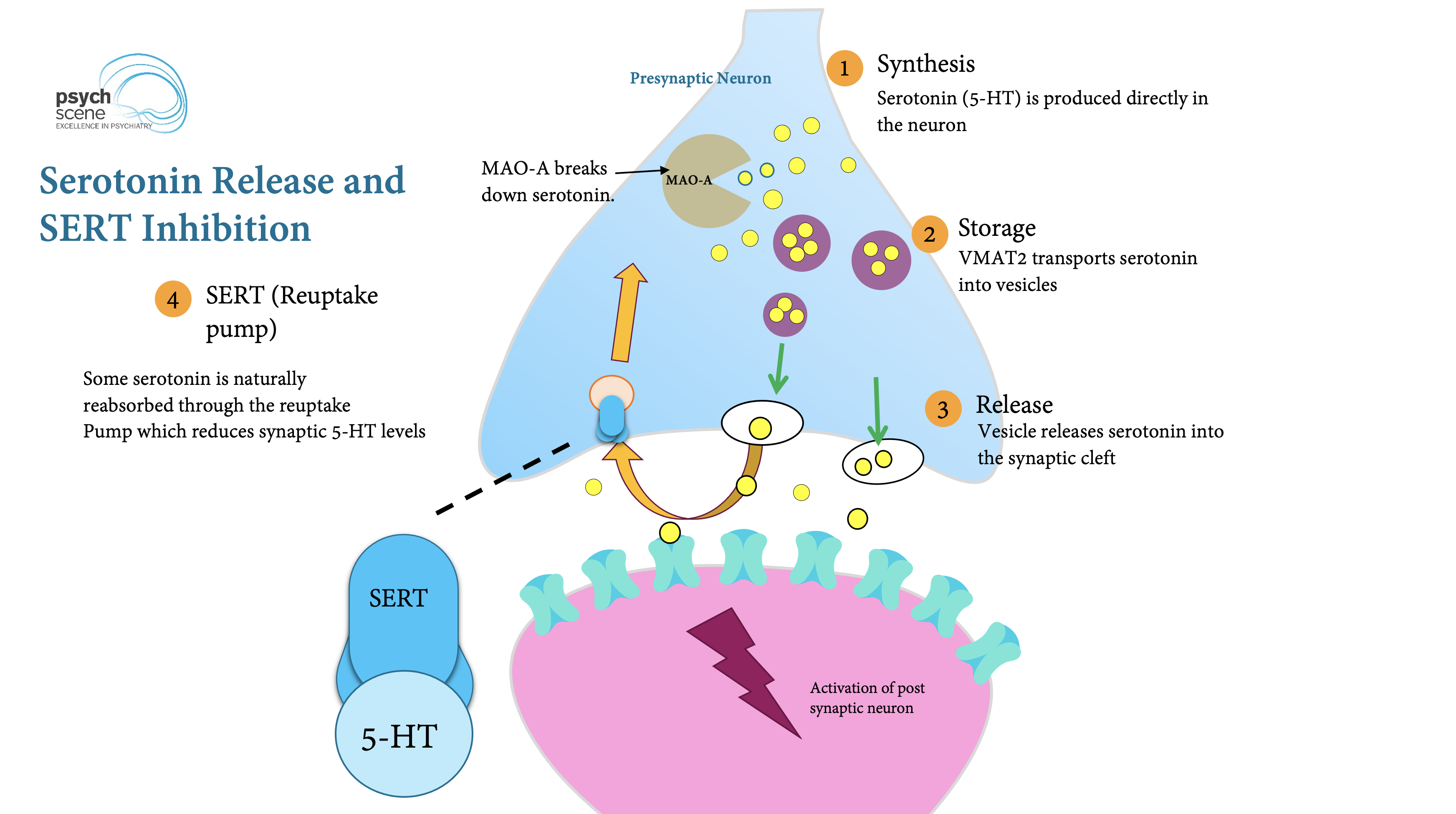 However, many antidepressants also act on serotonin receptors, known as 5-hydroxytryptamine (5-HT) receptors.

The 5-HT receptors are a group of receptors found throughout the central and peripheral nervous systems.

There are 7 general serotonin receptor classes and another 14 serotonin subtype receptors, most of which are implicated in depression and depressive-like behaviours.

Under normal conditions, the serotonin receptors are activated by synaptic serotonin and are involved in excitatory and inhibitory neurotransmission.

Once activated, these receptors modulate the downstream release of neurotransmitters such as Glutamate, Dopamine, Adrenaline, and GABA.

MECHANISM OF ACTION OF VORTIOXETINE (BRINTELLIX)

Vortioxetine has a unique pharmacological profile and a multimodal mechanism of action. It is considered beneficial in treating depression when pro-cognitive benefits are required. [D’Agostino et al., 2015] 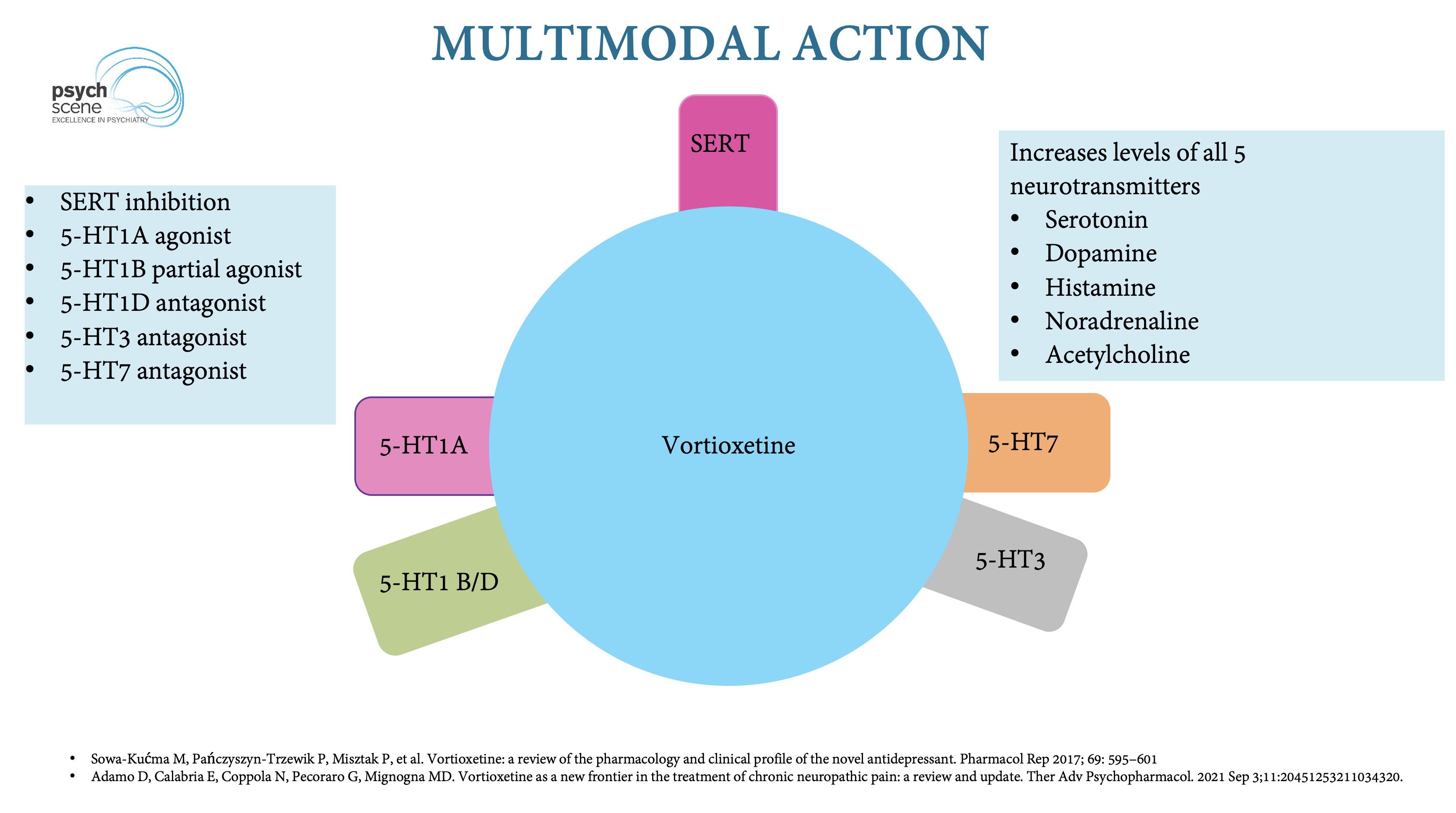 Vortioxetine has a high affinity for SERT, and SERT blockade increases the availability of serotonin in the synaptic cleft. 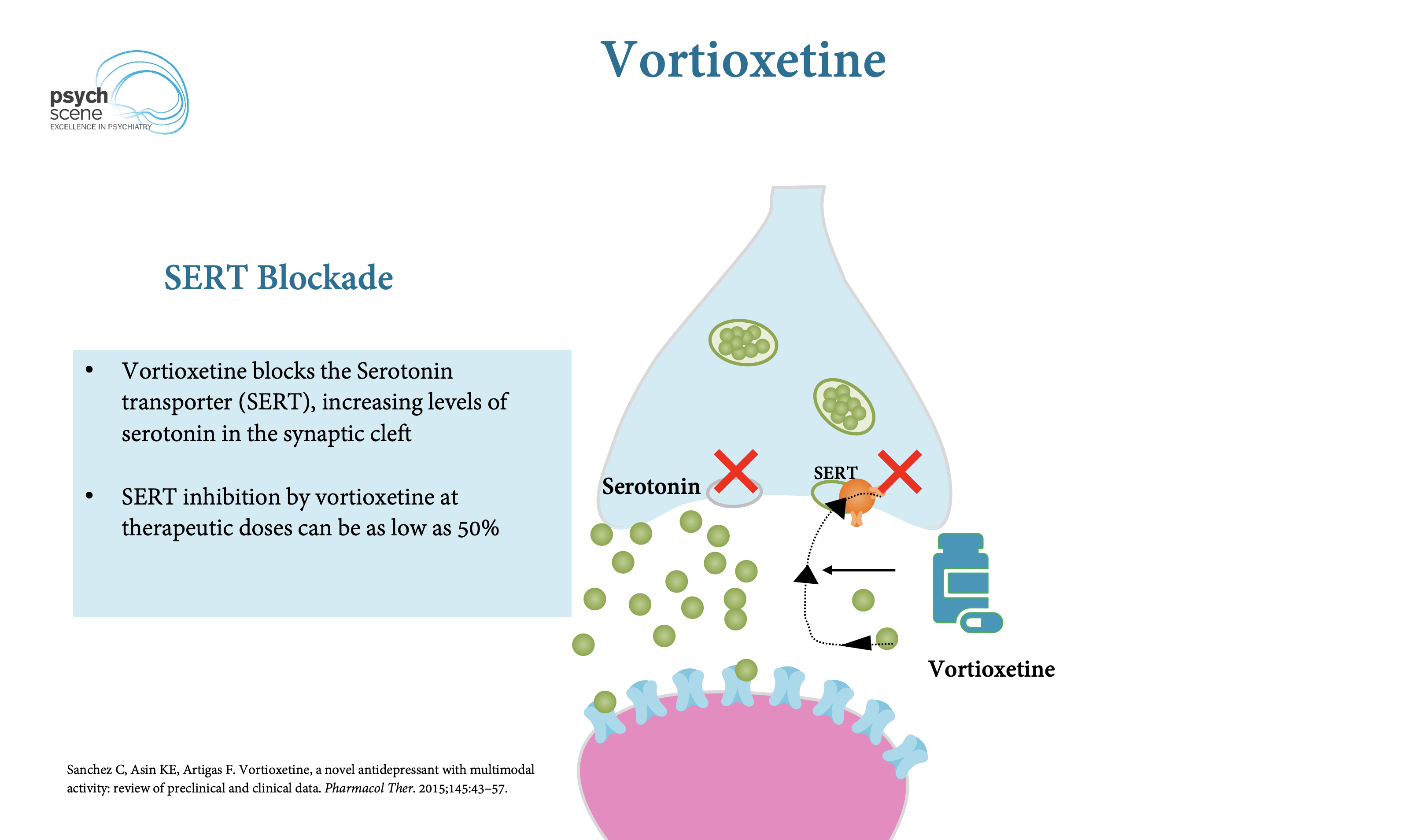 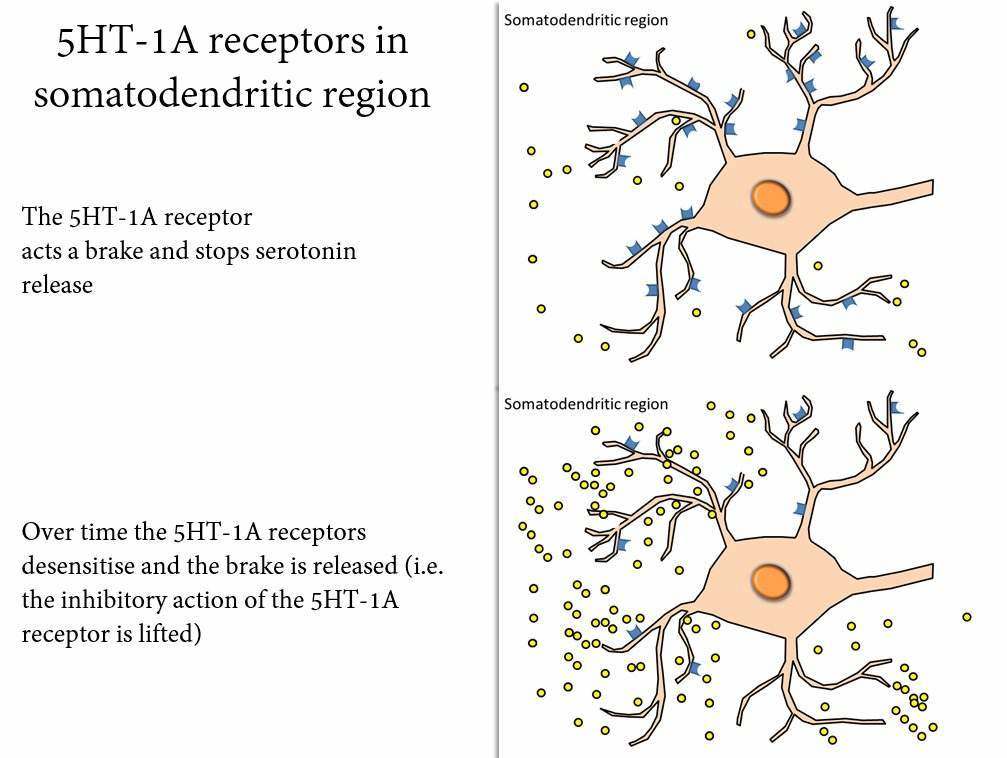 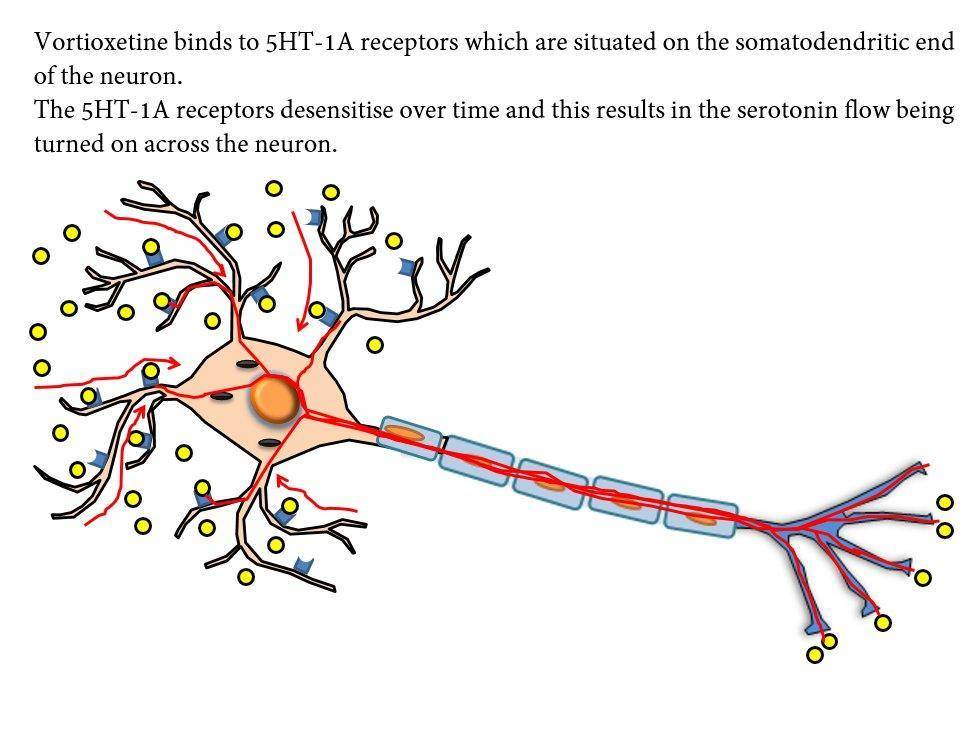 In summary, vortioxetine is a 5-HT modulator and stimulator which also potentiates the neurotransmission of the noradrenergic, dopaminergic, cholinergic, histaminergic, glutamatergic and gamma-aminobutyric acid (GABA)ergic systems through actions on 5-HT receptors.

These neurotransmitters are implicated in Major Depressive Disorder-associated mood and cognitive dysfunction. 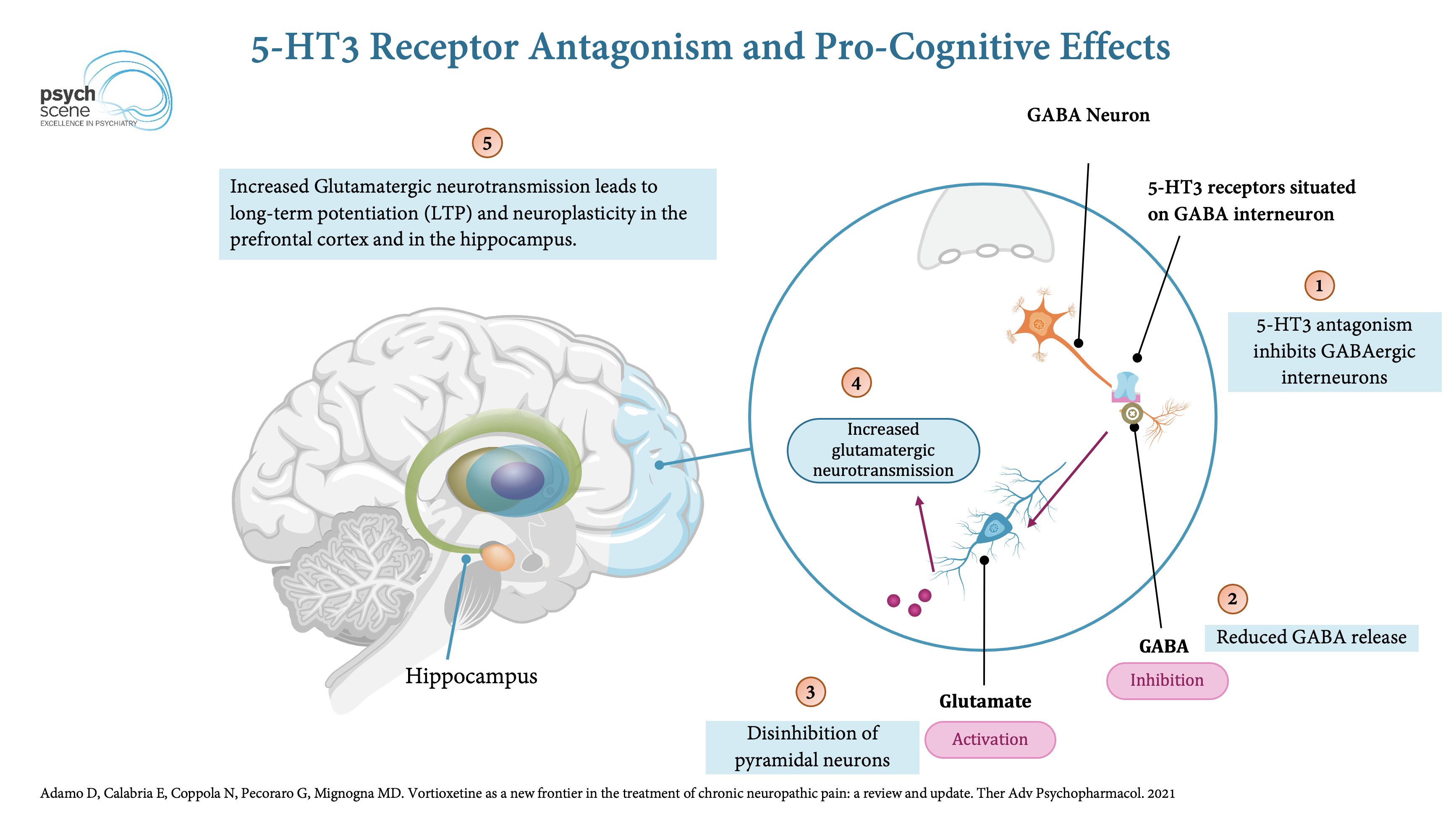 Summary of Mechanism of Action of Vortioxetine: 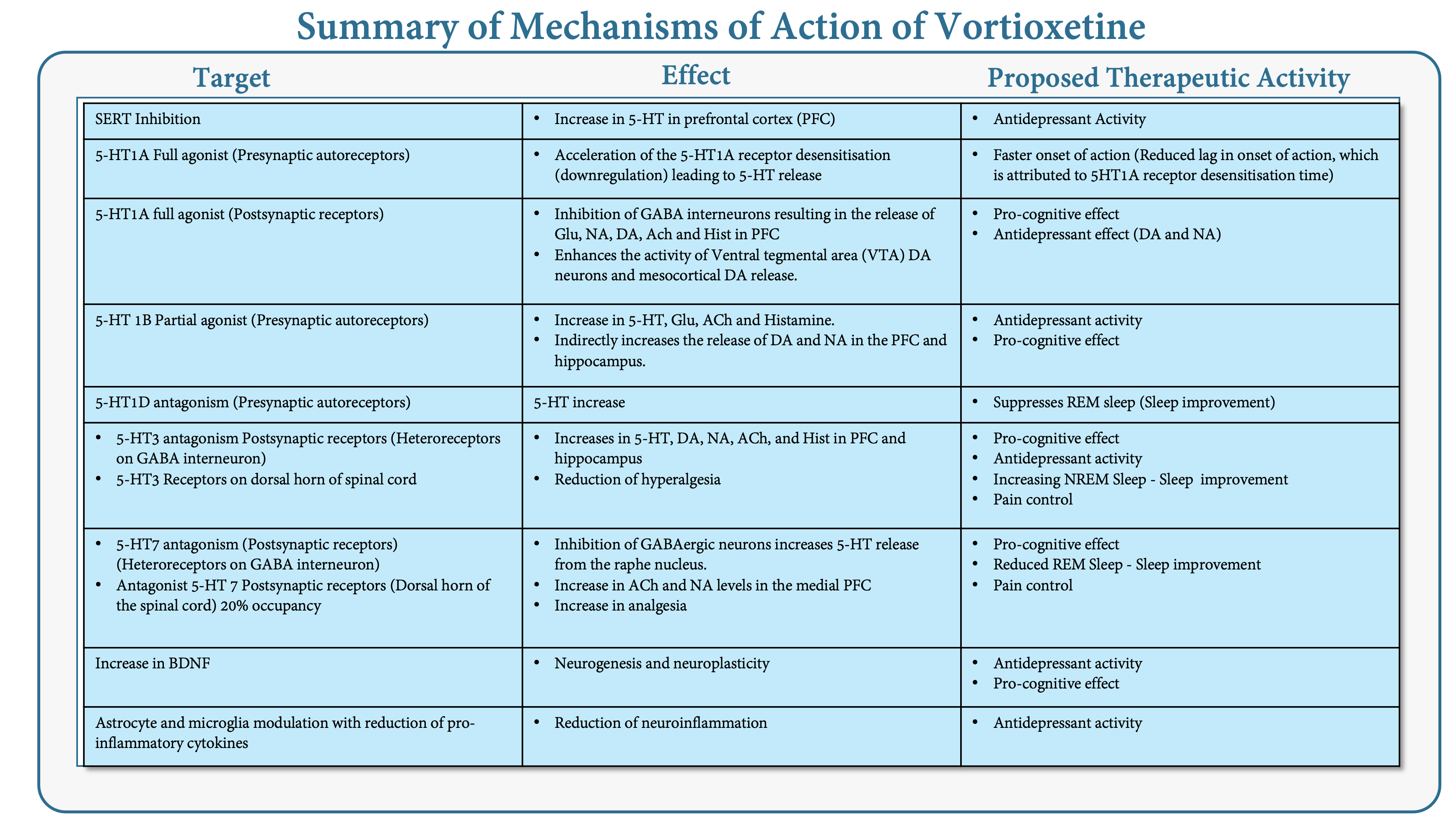 Vortioxetine is approved for Major Depressive Disorder (MDD) with a starting dose of 10 milligrams, increasing to 20 milligrams per day. [Product Information Brintellix]

Vortioxetine (Brintellix) is available as 5 mg, 10 mg and 20 mg tablets and drops.

Doses of 5–20mg were effective, with doses of 20mg exhibiting a greater clinical response.

The recommended starting dose is 5 mg vortioxetine once daily in patients ≥65 years of age. 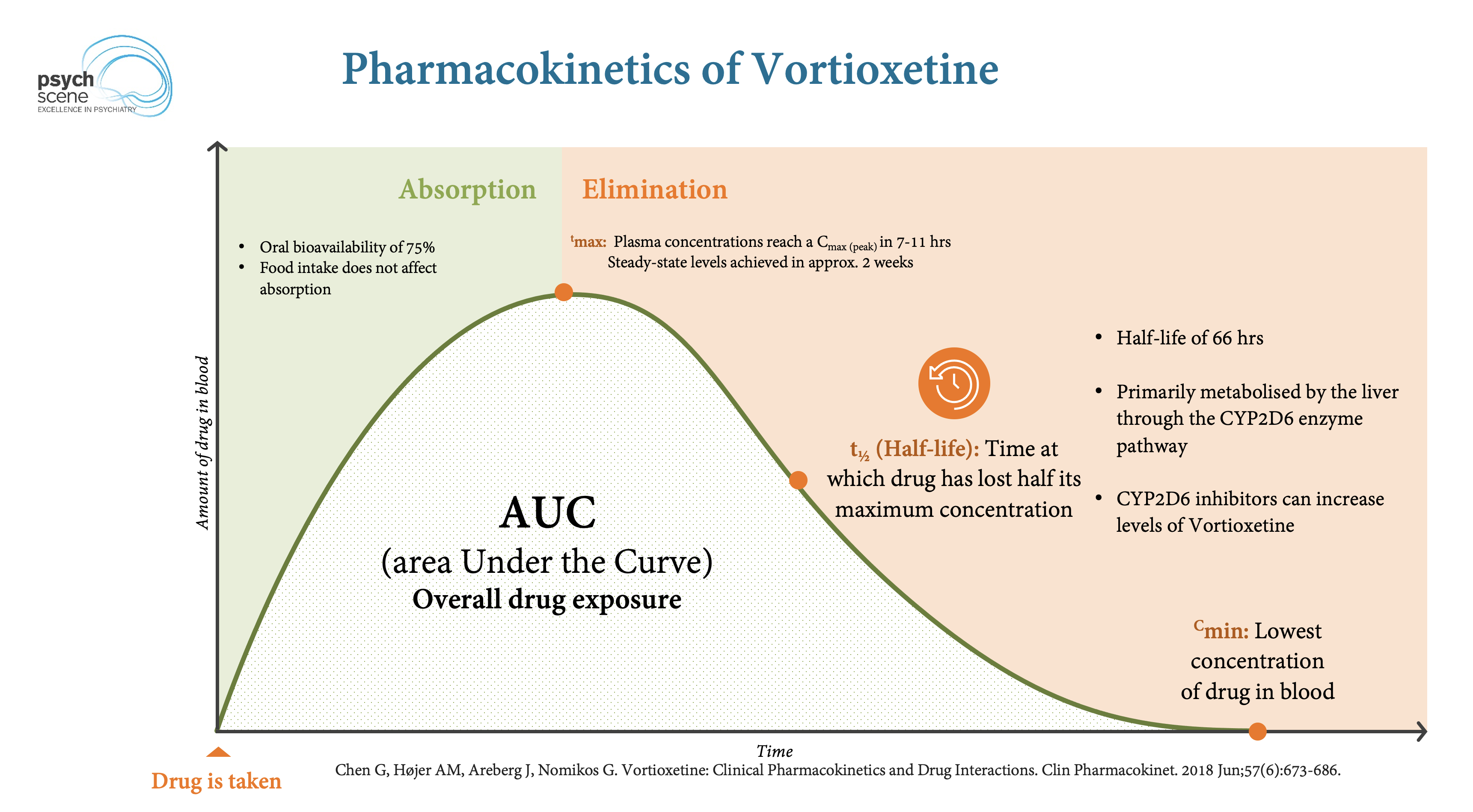 DRUG INTERACTIONS AND SIDE EFFECTS

A common side effect of vortioxetine is nausea, which has an incidence of 32% in patients who receive a dose of at least 15 milligrams. Generally, the nausea is usually transient, dose-related and more common in women and during the first week of treatment.

In an analysis of seven placebo-controlled trials, sexual dysfunction was reported by up to a third of men and women taking the 15 mg or 20 mg dose. Sexual problems were, however, also reported in up to 20% of people taking the placebo. (NPS)

An April 2017 paper stated that sexual dysfunction with vortioxetine was not statistically higher than placebo and was statistically lower than other SSRIs or SNRIs.

They also stated that there is evidence that antidepressants that are also 5HT-1A receptor agonists (e.g., vortioxetine and vilazodone) may facilitate sexual performance.

The RANZCP guidelines for mood disorders typical recommendation for Vortioxetine is second-line treatment; the features for which it is most likely to be useful are melancholia, severe depression and enhancing cognition.

The place of vortioxetine in the treatment of acute depression is unclear. Our analyses showed vortioxetine may be more effective than placebo in terms of response, remission and depressive symptoms, but the clinical relevance of these effects is uncertain.

Furthermore, the quality of evidence to support these findings was generally low. In comparison to SNRIs, we found no advantage for vortioxetine.

Vortioxetine was less effective than duloxetine, but fewer people reported adverse effects when treated with vortioxetine compared to duloxetine. However, these findings are uncertain and not well supported by evidence.

A major limitation of the current evidence is the lack of comparisons with the SSRIs, which are usually recommended as first-line treatments for acute depression.

Studies with direct comparisons to SSRIs are needed to address this gap and may be supplemented by network meta-analyses to define the role of vortioxetine in the treatment of depression.

In the recent largest-ever study on antidepressants by Cipriani et al., Vortioxetine ranked favourably for both efficacy and tolerability.

A post-hoc study showed that Vortioxetine improved anhedonia which correlated with improvement in function and quality of life. [Cao B et al., 2019]

A real-world chart review (32 patients) showed that adjunctive vortioxetine to patients with SSRI treatment resistance showed a response in 41.7 % and remission in 33% of individuals. [De Berardis D et al., 2020]

Adjunctive vortioxetine may be useful and well-tolerated in stage I treatment-resistant depression.

Heningsberg and colleagues conducted a multicentre, double-blind, placebo-controlled, parallel-group, 8-week trial of 560 patients with a MADRS score of at least 26. [Henigsberg et al., 2012]

Patients were randomly assigned either 1, 5, or 10 mg of vortioxetine, and the results showed a statistically significant reduction in HDRS-24 score for all dosages compared with placebo.

In another double-blind, randomised, fixed-dose, placebo-controlled, active reference 8-week study, patients with a MADRS score of ≥26 and a minimum CGI-S score of 4 were randomly assigned a daily dose of 15- or 20- mg of vortioxetine, duloxetine 60mg/day or placebo. [Boulenger et al., 2014]

All three treatments were statistically superior to placebo at reducing total MADRS scores.

Both doses of vortioxetine were statistically superior to placebo and were well tolerated.

Patients with MDD who experienced a partial response to SSRI/SNRI monotherapy at an adequate dose for ≥6 weeks were switched to 8 weeks of vortioxetine treatment 10-20 mg/day. [Fagiolini et al., 2021]

Vortioxetine was shown to be effective for treating emotional blunting.

Check out our CPD module, which summarises mechanisms of actions and side effect profiles of all antidepressants and antipsychotics for further information.

Loading A Focus on Vortioxetine – Mechanism of Action and Efficacy

Vortioxetine: a review of the pharmacology and clinical profile of the novel antidepressant.

Involvement of 5-HT1A receptors in prefrontal cortex in the modulation of dopaminergic activity: role in atypical antipsychotic action.

Involvement of 5-HT₇ receptors in vortioxetine's modulation of circadian rhythms and episodic memory in rodents.

Vortioxetine for cognitive enhancement in major depression: from animal models to clinical research.

Efficacy of Vortioxetine on Anhedonia: Results from a Pooled Analysis of Short-Term Studies in Patients with Major Depressive Disorder

Procognitive Effects of Antidepressants and Other Therapeutic Agents in Major Depressive Disorder: A Systematic Review.

Vortioxetine as a new frontier in the treatment of chronic neuropathic pain: a review and update.