Venlafaxine (EFFEXOR) is a serotonin and noradrenaline reuptake inhibitor (SNRI) that is indicated for major depressive disorder (MDD), generalised anxiety disorder, social anxiety disorder, and panic disorder with or without agoraphobia.

Desvenlafaxine (PRISTIQ) is a synthetic succinate version of venlafaxine’s major active metabolite, although its approval is limited to MDD.

Venlafaxine was the first SNRI to be approved by the US FDA (in 1993), and its novel phenethylamine bicyclic structure is structurally unrelated to other antidepressants. [Warneck et al. 2008]

MECHANISMS OF ACTION OF VENLAFAXINE AND DESVENLAFAXINE

Venlafaxine and its major active metabolite, desvenlafaxine, have been demonstrated to block the neuronal reuptake of noradrenaline, serotonin, and to a lesser extent, dopamine by blocking serotonin and noradrenaline transporters (SERT & NAT). [Montgomery 2008]

Venlafaxine, however, has a 30-fold higher affinity for the reuptake of serotonin over noradrenaline, whilst desvenlafaxine has a 10-fold affinity. [Liebowitz and Tourian 2010]

In vitro, venlafaxine and desvenlafaxine have been shown to have no significant affinity for muscarinic cholinergic, histaminergic, or α-1 adrenergic receptors. Furthermore, both compounds do not have any monoamine oxidase inhibitory activity.

There is some evidence of the role of opioid receptors contributing to venlafaxine’s antinociceptive effect (mu, kappa1, kappa3, and delta-opioid receptor subtypes). [Schreiber et al, 2002]

Comparison of affinities to other SNRIs:

PHARMACOKINETICS OF VENLAFAXINE AND DESVENLAFAXINE

Venlafaxine is well absorbed (≥92%) and extensively metabolised in the liver, which reduces its bioavailability to 40–45%; however, the metabolite ODV (i.e., desvenlafaxine) has equivalent pharmacological activity. [Wellington and Perry 2001]

Venlafaxine has two formulations, an immediate release (IR) and an extended-release (XR), which affect drug exposure:

Venlafaxine and its metabolites are primarily eliminated via the kidneys (92.1%) as either unchanged (4.7%), unconjugated-ODV (9.8%), or conjugated ODV (26.4%), with conjugated and unconjugated forms of venlafaxine’s other metabolites making up the rest of the metabolic disposition in urine. [Howell et al. 1993]

Research initially showed that age and gender did not significantly affect the pharmacokinetic profile of venlafaxine and ODV and that dose adjustments were not required. [Klamerus et al. 1996] However, it is essential to note that Klamerus et al. did observe that steady-state conditions were affected in the elderly (16% increase in exposure) but that this was deemed non-significant.

Since 1996 however, therapeutic drug monitoring research has suggested that in patients aged >60 years, there was a 46% increase in exposure, whilst there was a 30% increase in women. [Unterecker et al. 2012] As such, age and gender should be considered when recommending therapy. 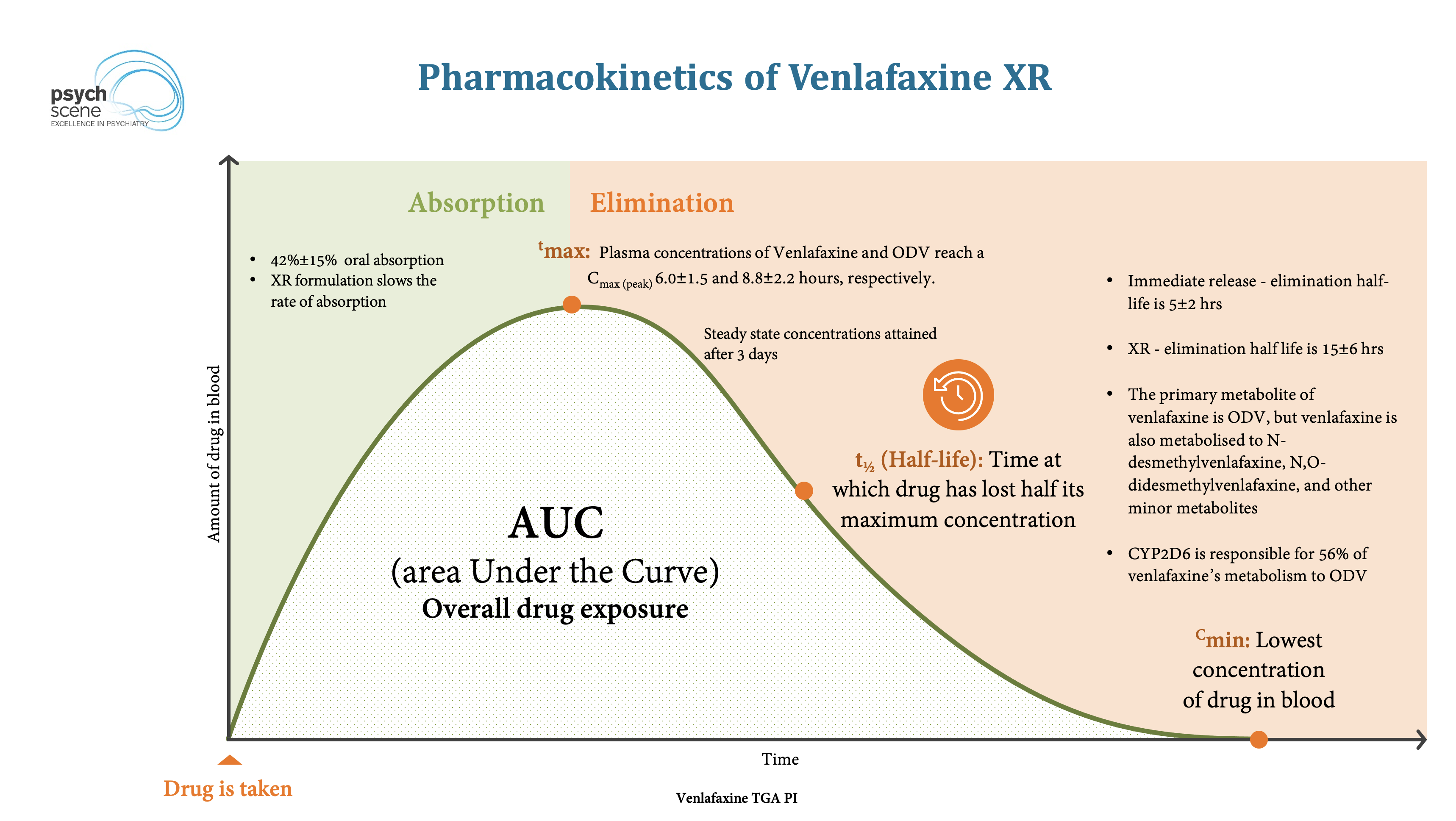 Desvenlafaxine is primarily metabolised by conjugation (shown to be mediated by UGT isoforms UGT1A1, UGT1A3, UGT2B4, UGT2B15, and UGT2B17 in vitro) and to a minor extent through oxidative metabolism. CYP3A4 is the predominant cytochrome P450 isozyme mediating the oxidative metabolism (N-demethylation) of desvenlafaxine. (small proportion). 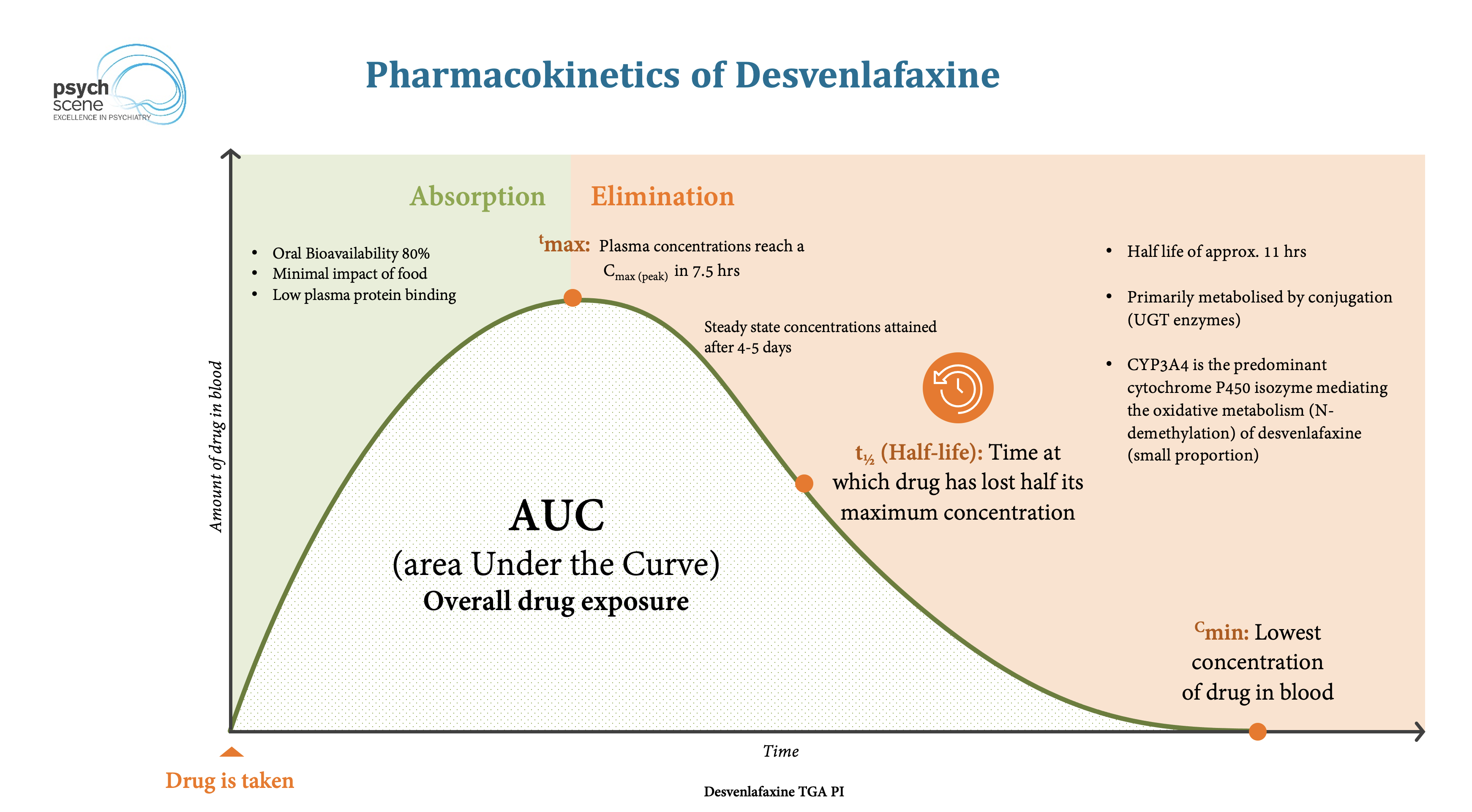 Read more about why broad-spectrum antidepressants are often needed to treat severe depression.

The most common adverse reactions reported are headache, somnolence, dry mouth, dizziness, insomnia, asthenia, sweating, and nervousness. Clinical trials have reported that treatment-emergent anxiety, nervousness, and insomnia resulted in discontinuation in 2%, 2% and 3%, respectively.

The adverse effect profile of venlafaxine at a dose of 75 mg/day is comparable to that of an SSRI, which is consistent with the fact that its highest binding affinity is for the serotonin uptake pump.

At higher doses, the side effect profile includes noradrenergic side effects such as activation, dry mouth, night sweats etc.

Venlafaxine and desvenlafaxine have also been reported to cause elevated serum aminotransferase levels. This drug-induced hepatotoxicity occurs in <1% of patients and is usually classified as mild, and thus dose modification or discontinuation is unnecessary. Other notable precautions include:

Hyponatraemia and/or the Syndrome of Inappropriate Antidiuretic Hormone secretion (SIADH) may occur with venlafaxine and desvenlafaxine, usually in volume-depleted or dehydrated patients.

Post-marketing research has reported that venlafaxine may prolong the QTc interval, causing cardiac arrhythmias and torsade de Pointes (TdP), the latter of which can be fatal. This effect has been suggested to account for the reported higher rates of fatal overdose with venlafaxine than SSRIs. [Martinez C et al. 2010]

However, a randomised crossover study in January 2022 showed that a 450 mg dose of venlafaxine-XR did not significantly prolong the QTc interval. [Abbas et al,2022].

There are no published data regarding QTc prolongation outside of premarketing studies in the package insert for desvenlafaxine.

A recent review on QTc interval prolongation risk with venlafaxine and desvenlafaxine put both on the lower end than other antidepressants. Read this for a more detailed review of QTC interval and psychotropics.

Read for more details and guidance about antidepressants in pregnancy and breastfeeding.

As such, genetic polymorphisms in CYP2D6 can significantly affect its pharmacodynamic profile.

Relevant drug interactions associated with inhibiting CYP2D6 and increasing venlafaxine’s plasma concentration include bupropion and fluoxetine (CYP2D6 and CYP2C19 inhibition). Fluoxetine has a long half-life (up to 15 days), and as such, the process of antidepressant switching comes with a high risk of serotonin syndrome. [Hiemke et al. 2018].

CLINICAL EVIDENCE FOR VENLAFAXINE AND DESVENLAFAXINE

Off-label, venlafaxine can be used for:

Read more about the treatment of perimenopausal depression.

Venlafaxine and desvenlafaxine are SNRIs that potentiate serotonin and noradrenaline neurotransmitter activity within the CNS.

However, there are pharmacodynamic and pharmacokinetic differences between the two that are clinically relevant.

Both Venlafaxine and desvenlafaxine have applications in a range of disorders beyond depression and anxiety.

Efficacy, safety, and tolerability of Desvenlafaxine 50 mg/d for the treatment of major depressive disorder:a systematic review of clinical trials

Differential physiological effects of a low dose and high doses of venlafaxine in major depression.

Evidence of the dual mechanisms of action of venlafaxine

Desvenlafaxine in major depressive disorder: an evidence-based review of its place in therapy

Venlafaxine extended-release: a review of its use in the management of major depression

Wellington K and Perry C. Venlafaxine extended-release: a review of its use in the management of major depression. CNS Drugs 2001;15:643-669.

Effects of age and gender on venlafaxine and O-desmethylvenlafaxine pharmacokinetics

The effect of age, sex, smoking and co-medication on serum levels of venlafaxine and O-desmethylvenlafaxine under naturalistic conditions

Unterecker S et al., The effect of age, sex, smoking and co-medication on serum levels of venlafaxine and O-desmethylvenlafaxine under naturalistic conditions. Pharmacopsychiatry. 2012;45:229-235.

A randomized, double-blind, placebo-controlled trial of desvenlafaxine succinate in the treatment of major depressive disorder

A double-blind, placebo-controlled study of the efficacy and safety of desvenlafaxine succinate in the treatment of major depressive disorder.

Desvenlafaxine for the acute treatment of depression: a systematic review and meta-analysis.

Use of venlafaxine compared with other antidepressants and the risk of sudden cardiac death or near death: a nested case-control study.

Martinez C et al., Use of venlafaxine compared with other antidepressants and the risk of sudden cardiac death or near death: a nested case-control study. BMJ. 2010;340:c249.

Validation of a population-based method to assess drug-induced alterations in the QT interval: a self-controlled crossover study.

Lack of an Effect of Supratherapeutic Dose of Venlafaxine on Cardiac Repolarization in Healthy Subjects.

Frequency of Sexual Dysfunction in Patients Treated with Desvenlafaxine: A Prospective Naturalistic Study.

Effects of venlafaxine on blood pressure: a meta-analysis of original data from 3744 depressed patients

Venlafaxine extended-release in the treatment of painful diabetic neuropathy: a double-blind, placebo-controlled study.

Treatment of Neuropathic Pain with Venlafaxine: A Systematic Review

Venlafaxine and desvenlafaxine in the management of menopausal hot flashes

Venlafaxine versus amitriptyline in the prophylactic treatment of migraine: randomized, double-blind, crossover study.

Antidepressants for Preventive Treatment of Migraine

A double blind comparison of venlafaxine and paroxetine in obsessive-compulsive disorder.

Desvenlafaxine in the treatment of major depression: an updated overview.

Effects of desvenlafaxine versus placebo on MDD symptom clusters: A pooled analysis.

Clinical experience with desvenlafaxine in treatment of pain associated with diabetic peripheral neuropathy.

Efficacy and safety of desvenlafaxine treatment for hot flashes associated with menopause: a meta-analysis of randomized controlled trials

Guidelines for the evaluation and treatment of perimenopausal depression: summary and recommendations.

Desvenlafaxine versus Venlafaxine for the Treatment of Adult Patients with Major Depressive Disorder: A Review of the Comparative Clinical and Cost-Effectiveness [Internet].

Poitras V, Visintini S. Desvenlafaxine versus Venlafaxine for the Treatment of Adult Patients with Major Depressive Disorder: A Review of the Comparative Clinical and Cost-Effectiveness [Internet]. Ottawa (ON): Canadian Agency for Drugs and Technologies in Health; 2017 Oct 25. Summary of Evidence