Varenicline has been shown to be superior to placebo and nicotine-replacement therapies. It is often used alongside behavioural support, which may include face-to-face counselling or group therapies to help people who smoke quit as soon as possible. [Ranney et al. 2006]

However, safety concerns about varenicline have been raised, especially for patients with psychiatric disorders. [Tobin and Tobin 2015]

The initial trials performed by Pfizer excluded patients with psychiatric disorders. Since its approval in 2006, the FDA has published additional warnings (in 2007, 2009, and 2011) about the risk of serious neuropsychiatric side effects. [CHAMPIX® (varenicline) Tablets Prescribing Information]

MECHANISM OF ACTION OF VARENICLINE

When nicotine binds to α4β2 nicotinic acetylcholine receptors (nAChRs) in the mesolimbic and mesocortical pathways, it induces a dopamine release, stimulating conditioned learning and reward-motivation behaviours. In addition, adaptation and sensitisation cause upregulation of these receptors resulting in the compulsive use of nicotine to maintain homeostasis. [Benowitz 2010] 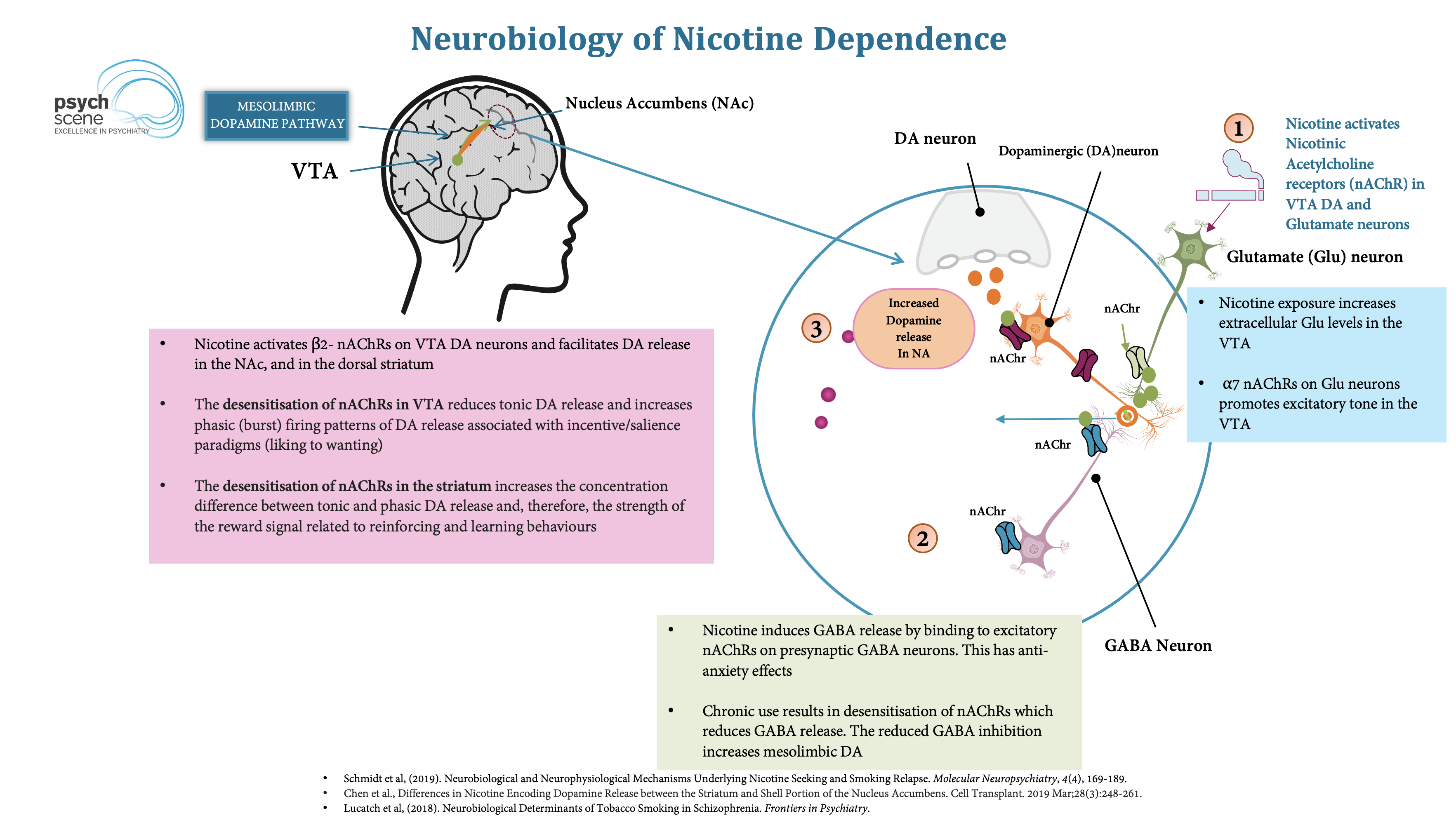 During a relapse, the antagonist activity would blunt nicotine reinforcement by competing with inhaled nicotine for the same α4β2 and α6β2 nAChR binding sites. 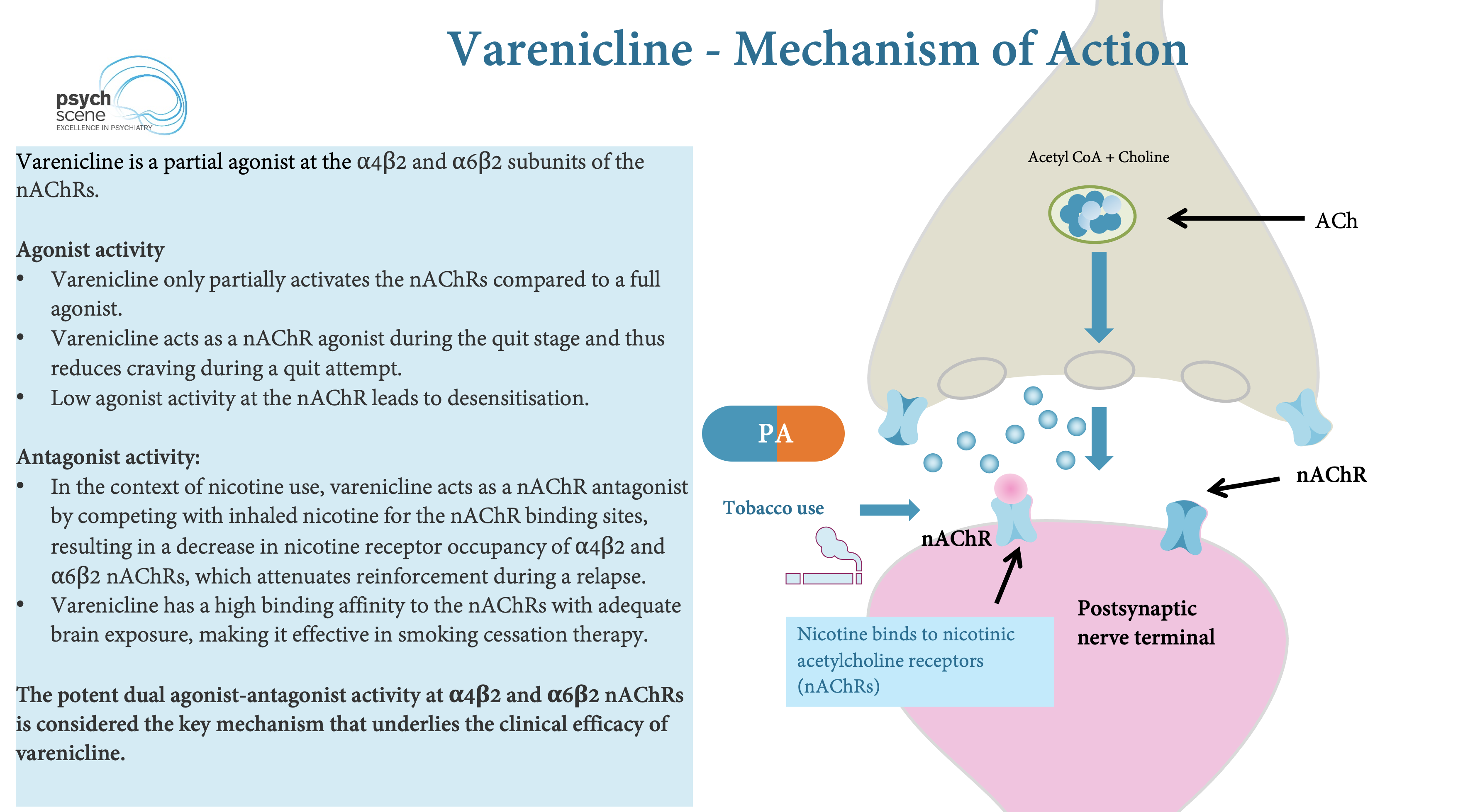 Varenicline has approximately 90% bioavailability and undergoes minimal metabolism, with 92% eliminated unchanged in the urine. The elimination half-life is about 24 hours; however, varenicline exposure has been shown to increase 1.5-fold and 2.1-fold in patients with moderate or severe renal impairment. [Faessel et al. 2010] 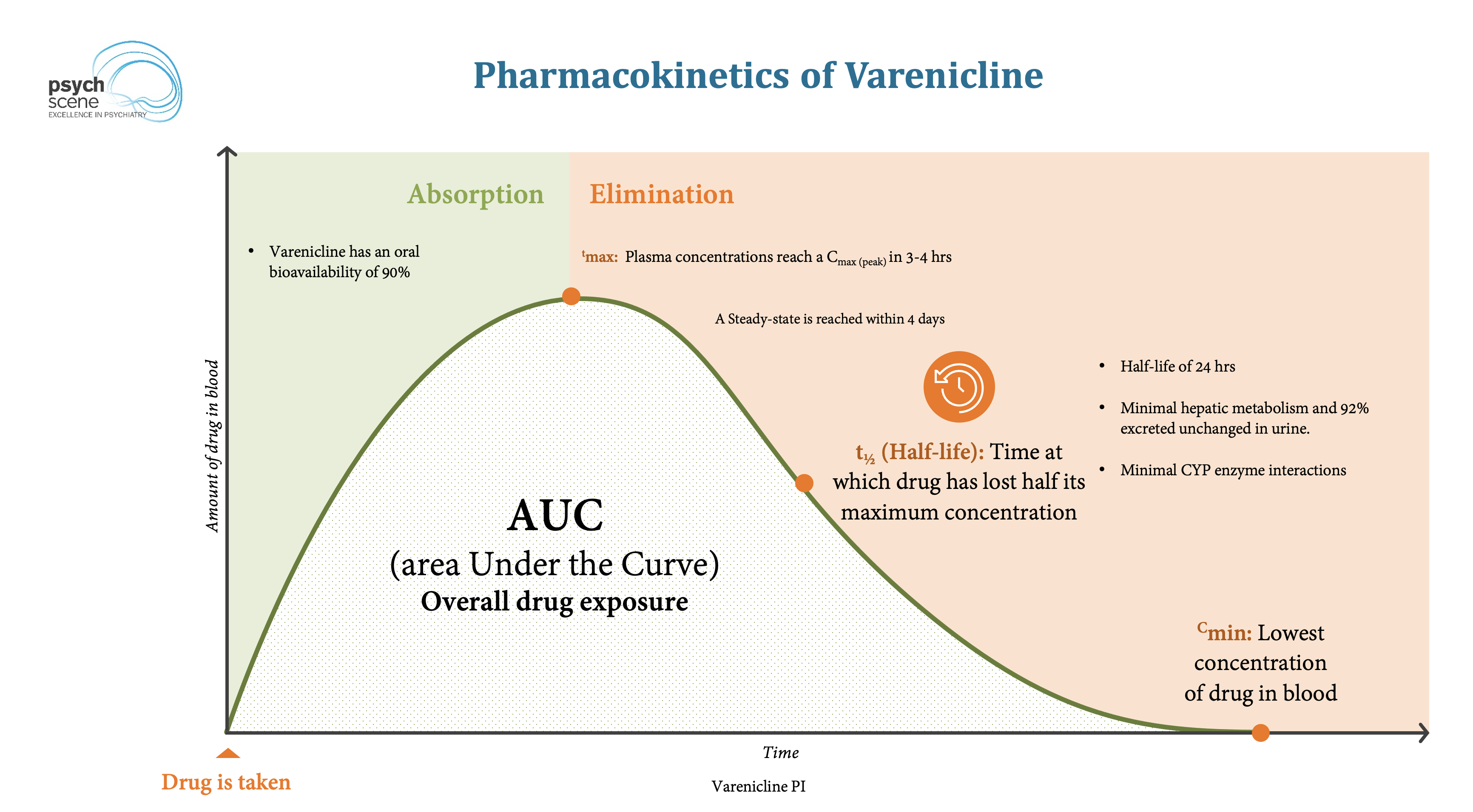 Smoking cessation therapies are more likely to succeed for patients motivated to stop smoking and provided with additional advice and support.

The patient should set a date to stop smoking. CHAMPIX dosing should start 1-2 weeks before this date.

The recommended dose of Varenicline (CHAMPIX) is 1 mg BD following a 1-week titration as follows:

Patients should be treated with CHAMPIX for 12 weeks.

For patients who have successfully stopped smoking at the end of 12 weeks, an additional 12 weeks of treatment with CHAMPIX at 1 mg twice daily is recommended to further increase the likelihood of long-term abstinence.

A retrial of varenicline is indicated for:

Varenicline dosing of up to 5 mg/day showed no additional benefit. [Hajek et al., 2015]

The most common adverse events associated with varenicline are nausea (mild or moderate), insomnia, abnormal dreams, headache, and fatigue/malaise.

Varenicline, like bupropion, also comes with a black box warning for possible neuropsychiatric severe side effects, including changes in behaviour such as hostility, agitation, depressed mood, and suicidal ideation.

However, a large FDA-sponsored retrospective cohort study showed no difference in the rates of psychiatric hospitalisation between those treated with either varenicline or nicotine replacement therapy. [Meyer et al. 2013] Despite these data, the FDA concluded that the evidence was insufficient to remove this black box warning.

Varenicline is considered the first-line treatment for smoking cessation based on evidence. Varenicline is more effective than placebo, bupropion and NRT in the general population and individuals with comorbid psychiatric conditions, comorbid CVD and COPD. [Tonstad et al, 2020].

A recent study published in October 2021 in JAMA investigated whether combining varenicline with a nicotine patch could improve cessation effectiveness. [Baker et al. 2021]

This study included 5,836 adults who smoked ≥5 cigarettes per day and were treated with either varenicline monotherapy or varenicline plus a nicotine patch for 12 weeks or 24 weeks.

Interestingly, this is in contrast to a previous study in 2014, also published in JAMA, which showed that combining varenicline with nicotine replacement therapy was more effective than varenicline monotherapy based on higher abstinence rates at 6 months. [Koegelenberg et al 2014]

Varenicline shows promise for post-smoking cessation nicotine use in individuals who continue to use nicotine replacement products for years.

Varenicline has also shown some potential for indications beyond smoking cessation, including for alcohol use disorder and other addictions, e.g. cocaine addiction. [Tonstad et al, 2020].

In many randomised trials and real-world observational studies, varenicline has been shown to improve the long-term cessation of smoking substantially.

Although substantial concerns have been raised about the neuropsychiatric safety of varenicline, several trials and meta-analyses have shown that varenicline is safe in adult smokers with and without psychiatric disorders.

Pharmacological interventions for smoking cessation: an overview and network meta-analysis

Faessel H et al., A review of the clinical pharmacokinetics and pharmacodynamics of varenicline for smoking cessation. Clin Pharmacokinet 2010;49(12):799-816.

Increasing varenicline dose in smokers who do not respond to the standard dosage: a randomized clinical trial.

Neuropsychiatric safety and efficacy of varenicline, bupropion, and nicotine patch in smokers with and without psychiatric disorders (EAGLES): a double-blind, randomised, placebo-controlled clinical trial

Effects of Combined Varenicline With Nicotine Patch and of Extended Treatment Duration on Smoking Cessation: A Randomized Clinical Trial