Thyroid and Mental Health – Role of Thyroid Gland in Depression, Anxiety and Psychosis? – Is the TSH enough to diagnose thyroid dysfunction?

Thyroid hormones are essential for brain maturation and for brain function throughout life.

They play an important role in cell maturation, mitochondrial function and myelination. Disruption of these cellular functions due to thyroid dysfunction can lead to neuropsychiatric disturbances. 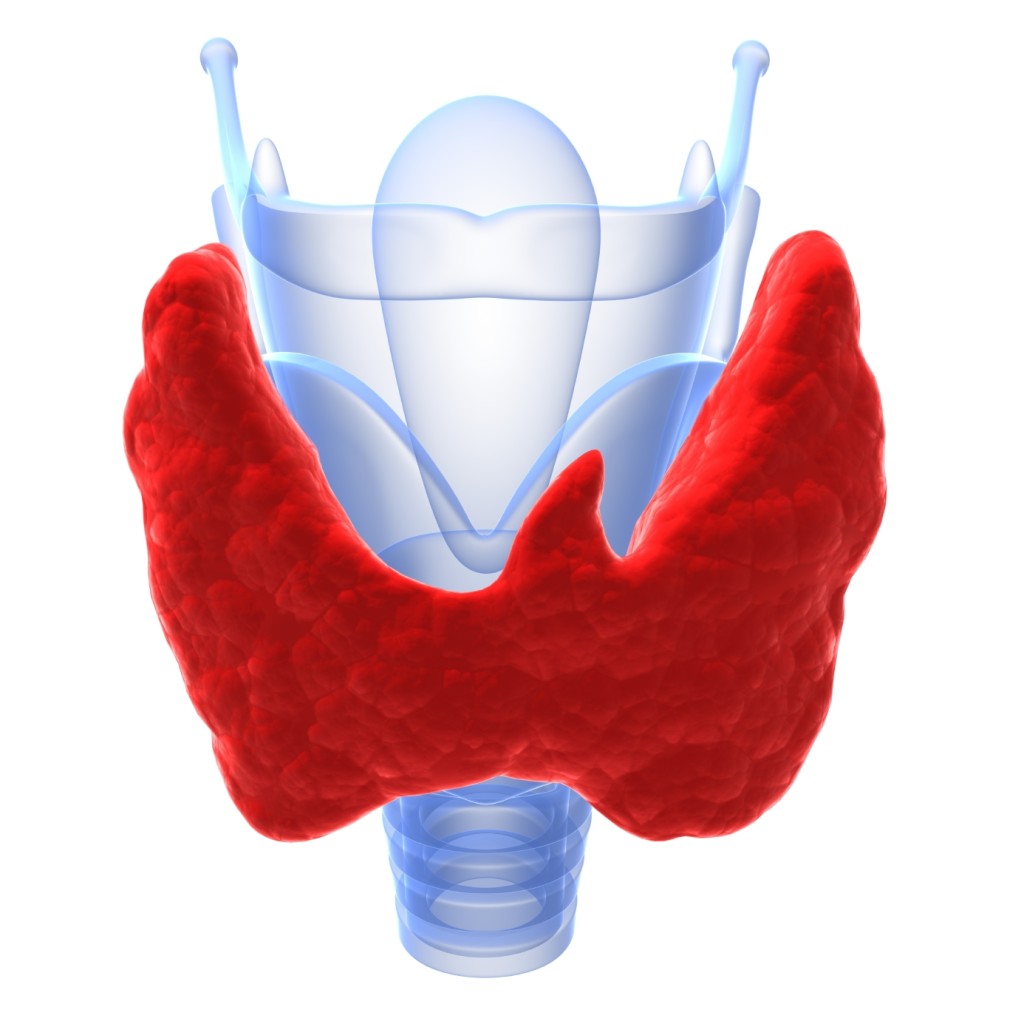 A postmenopausal woman with a diagnosis of treatment-resistant paranoid schizophrenia was on high dose typical antipsychotics. Her symptoms included depressive symptoms, delusions of nihilism and persecution. On clinical assessment, she showed signs and symptoms of hypothyroidism with her TSH level at 4.5 (normal lab range in the hospital was 0.5-5) with normal T4 and T3.

A 22-year-old female who was being treated for depression with citalopram continued to complain of poor energy levels and ongoing low mood. On history taking she had a number of symptoms of hypothyroidism, most notably thinning of hair with hair loss, fatigue and menstrual abnormalities; all of which have been exacerbated after her first pregnancy. Her TSH levels were 2.3 with normal T3 and T4 (but at the lower end of normal).

HOW WERE THE PATIENTS TREATED?

I initiated Thyroxine based on her clinical presentation, and she responded to thyroid replacement of 50mcg in a matter of a week with her delusions remitting completely in two weeks. Furthermore, we were able to reduce the typical antipsychotic dose which led to further improvements in mood.

I considered the hypothesis of possible hypothyroidism based on the clinical picture and prescribed a two week trial of 50 mcg of Thyroxine as an augmentation agent with the Citalopram. She showed a dramatic improvement in a week and particularly reported a decrease in her fatigue and improved motivation.

The response in both cases is noticeably striking due to the rapidity of response. Note that in the latter two cases, the TSH levels were within the normal lab range, yet they responded. These are in fact just two of several cases that respond brilliantly to Thyroid Replacement Therapy (TRT) when a careful clinical assessment reveals signs and symptoms of hypothyroidism. Monitoring of the TSH to avoid hyperthyroidism and close collaboration with the GP and if possible an endocrinologist is important.

Evidence suggests that Thyroxine augmentation of antidepressants is an established strategy in the treatment of depression including treatment-resistant depression.

In another study in female depressed patients, the authors concluded:

The addition of moderate dose of l-thyroxine may be a successful augmentation strategy in female depressed patients in whom the effect of serotonergic antidepressant had been unsatisfactory. It may be efficient despite of the lack of disturbances of thyroid axis in such patients. [Łojko D & Rybakowski J K 2007]

In some patients with no clear evidence of a biochemical or clinical thyroid disorder, mood symptoms nevertheless respond to thyroid hormone augmentation of antidepressants. [Geracioti T., 2006]

WHY THE DIVIDE BETWEEN ENDOCRINOLOGY AND PSYCHIATRY?

In clinical practice, patients with mild increases of TSH or normal TSH with clinical symptoms of hypothyroidism may not receive treatment by endocrinologists.

A TSH of 6 mIU/L is classified as sub-clinical hypothyroidism even if the patient presents with clinical signs and symptoms.

Thus it is important to take a pragmatic approach. Some of the reasons for this divide are as follows:

1. The misunderstanding of the working of the thyroid and its effect on the brain.

2. The misapplication of screening and diagnostic tests:

1. Mechanism of action of the Thyroid gland: Dr David Derry (Specialist Endocrinologist) sums it up brilliantly in the following interview (edited).

To start with, the thyroid metabolism is controlled locally in the tissue by each organ (By Deiodinases). The brain has one mechanism for controlling the amount of thyroid available to the brain but it is different from other tissues such as the liver.  The problem with this is– if a tissue needs more (such as the brain with depression) there is no way for the brain to signal the thyroid that it needs more sent up to it.

The thyroid merrily goes on putting out the same amount of thyroid hormone. So the patient can have symptoms related to low thyroid in the brain (for example) but the thyroid doesn’t do anything about it. But if you give thyroid hormones in an adequate dose the brain symptoms will disappear.

Meanwhile the other tissues and organs adapt to the increased circulating hormones that you have used to fix the brain with.

But because of the all inclusiveness of the TSH, medical students are not taught or only superficially taught the symptoms of low thyroid. The TSH was “scientific” and held all the answers to thyroid disease. If you have not lived through several versions of the ultimate test for thyroid then it is harder to grasp this phenomenon.  [Dr David Derry]

2. In order to treat depression through the serotonin pathway, the thyroid is an important part of the equation via an increase in serotonergic neurotransmission, specifically by reducing the sensitivity of 5-HT1A autoreceptors in the raphe area, and by increasing 5-HT2 receptor sensitivity. [Bauer M, 2002, Mol Psychiatry]

The entire article by Bauer et al. published in Molecular Psychiatry can be read here.

You will appreciate that a single TSH range does not encompass the abnormalities of thyroid in the different tissues in the body. Simply put, a TSH can be normal, despite the individual having a number of symptoms. The brain has a very high density of thyroid receptors (amongst the highest of any organ) and is extremely susceptible to mild changes in the thyroid hormone.

Indeed, even though the normal range for TSH is generally listed at between 0.35 mIU/mL and 4.50 mIU/mL, it is likely that the “most normal” range is between 0.5 mIU/mL and 2.50 mIU/mL. It is for this reason that the target TSH in the management of hypothyroidism is within this latter range.

It is important to understand that normal ranges are calculated based on the 2.5th to 97.5th percentiles of the distribution of values measured in the population tested. Therefore, 2.5% of people with completely normal thyroid function will have a TSH slightly below the listed normal range (and 2.5% slightly above the normal range). [Sheehan M., 2016]

CLINICAL SIGNS AND SYMPTOMS WITH HYPOTHYROIDISM 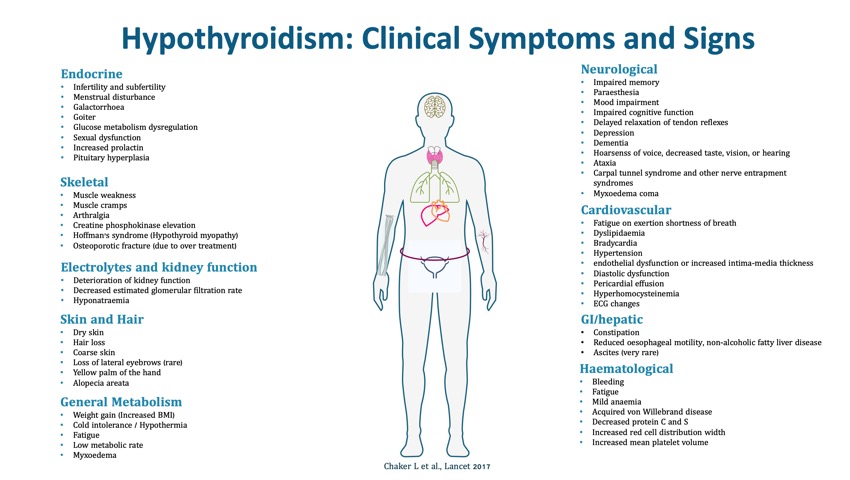 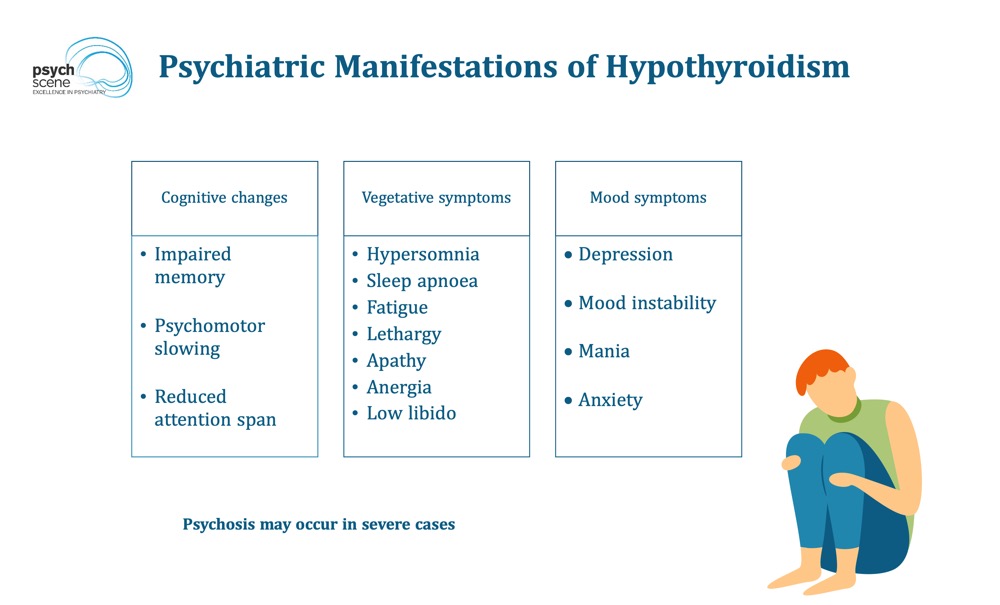 ALGORITHMS FOR MANAGEMENT OF PRIMARY AND SUBCLINICAL HYPOTHYROIDISM 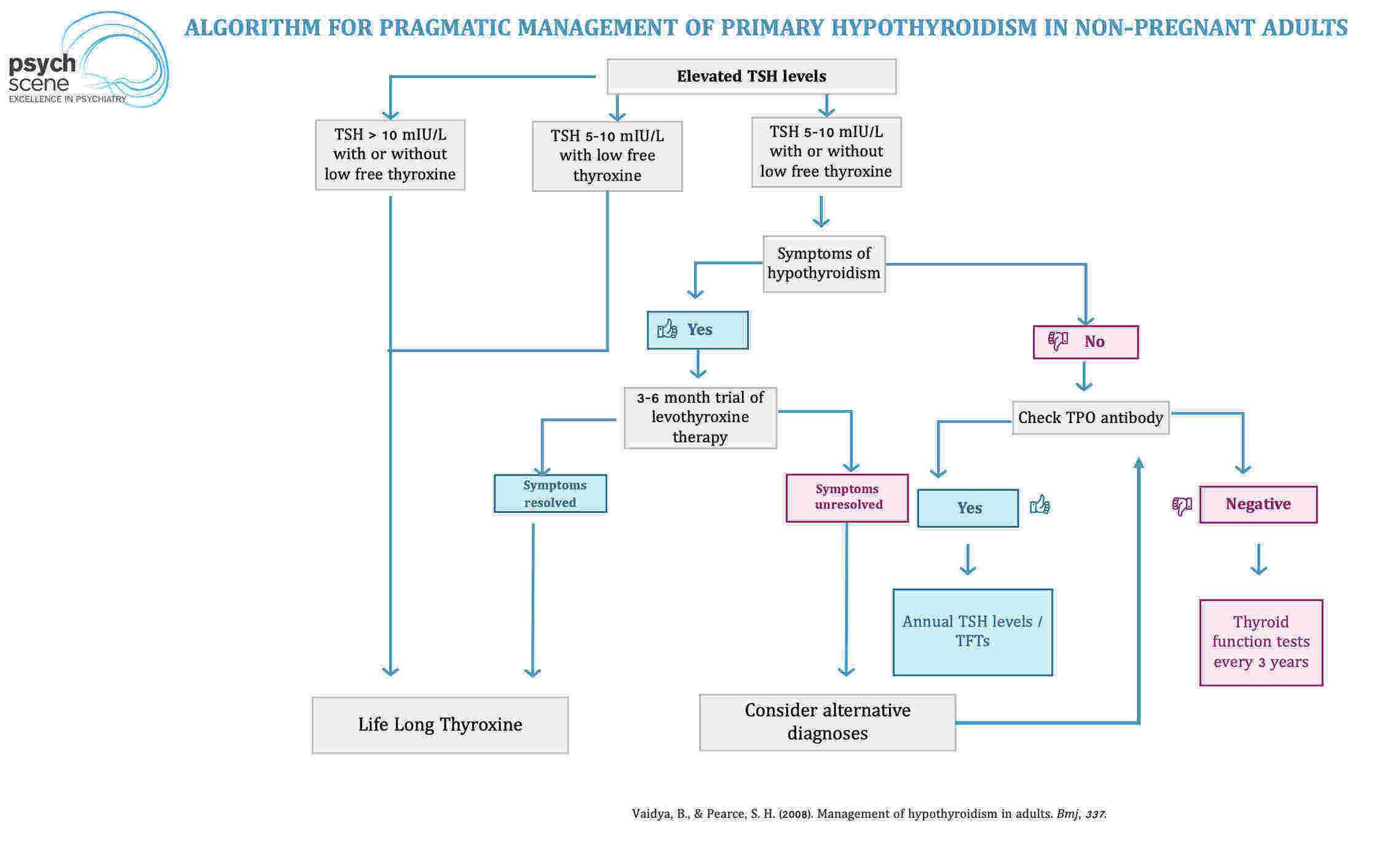 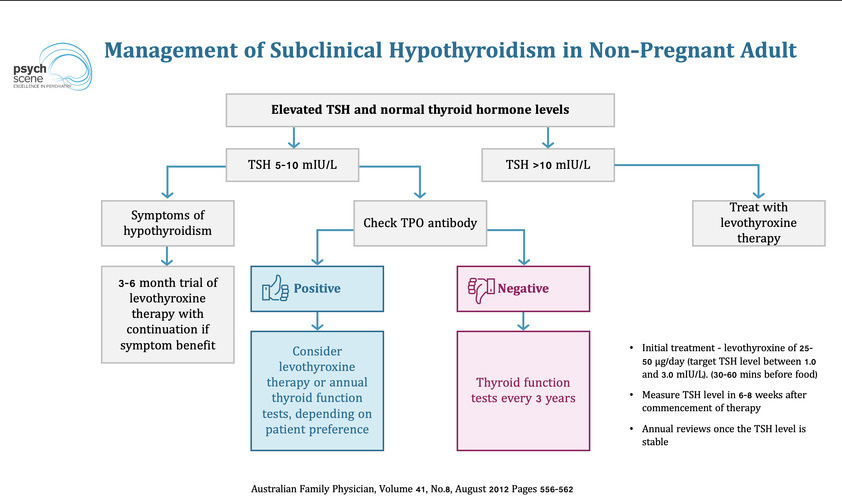 PRINCIPLES OF MANAGEMENT OF HYPOTHYROIDISM IN PSYCHIATRY

Psychiatric patients with subclinical hypothyroidism— especially those with incomplete responses to psychotropic therapy—should usually be treated with thyroid hormone. Following are some of the criteria that should prompt consideration for thyroid hormone treatment:

Free T3 levels in the lower 20% of the laboratory’s normal range are cause for pause in a patient with a mood or psychotic disorder and any of hypothyroidism’s clinical stigmata, even if thyroxine and TSH concentrations are normal. [Geracioti., 2006]

Treat the person, not the blood test.

Want to Learn More? Read about the 15 little-known things about the thyroid that can affect your mental health.

Loading Thyroid and Mental Health – Role of Thyroid Gland in Depression, Anxiety and Psychosis? – Is the TSH enough to diagnose thyroid dysfunction?

Thyroid, Serotonin and the Brain
Bauer, M., A. Heinz, and P. C. Whybrow. “Thyroid hormones, serotonin and mood: of synergy and significance in the adult brain.” Molecular psychiatry 7, no. 2 (2002).
Identifying hypothyroidism's psychiatric presentations.

Biochemical testing of the thyroid: TSH is the best and, oftentimes, only test needed–a review for primary care