A Synopsis of the Side Effects of Psychotherapy – What Should Clinicians Know?

Psychological interventions are evidence based first line treatments for many psychiatric disorders with evidence that therapy can alleviate mental distress and enhance wellbeing. In conditions such as depression and anxiety, the beneficial effects of psychotherapy are often comparable with evidence-based pharmacotherapy options in terms of symptom reduction and protection against relapse.

At first pass it might appear bizarre to question whether psychotherapy could be harmful or have substantive side effects, with Nutt & Sharpe observing that there is an assumption……that as psychotherapy is only talking……no possible harm could ensue. [1] (Berk & Parker)

While discussion about side effects, risks and benefits are an important part of psychotropic medication prescribing, the same cannot be said for psychological treatments. All pharmacological medications come with relevant or absolute contraindications, and yet the common assumption is that talking therapies are risk-free or come with little risk at all.

Most psychotherapy clinical trials concentrate on observing clinical efficacy based on that study’s predetermined diagnostic criteria.  It is important to recognise that psychotherapy is not free from side effects with a range of potentially negative patient outcomes in the context of treatment [1]. 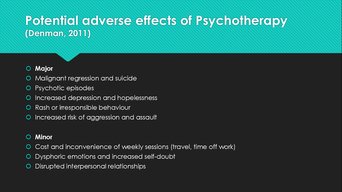 The study of negative effects in psychotherapy research is under-represented, and this is due to several reasons:

Dr Osheroff was a 42-year-old physician who was admitted to Chestnut lodge in 1979 with depression and agitation. Although Chestnut lodge recorded the symptoms of major depression, they attempted to treat him with psychotherapeutic techniques.

During the seven months that Mr Osheroff was in Chestnut Lodge, his condition deteriorated, and his family took him out of Chestnut lodge and admitted him to another psychiatric hospital where he was treated with medication and his condition rapidly improved within a matter of weeks.

However, the delay in treatment led to a loss of his practising license, loss of his relationship and loss of his practice. Dr Osheroff subsequently sued for malpractice on the basis that he should have been treated with the medication of demonstrable efficacy as opposed to intensive psychotherapy which was not indicated for his type and severity of depression. You can read the case in more detail here.

DEFINING AND ASSESSING PSYCHOTHERAPY SIDE EFFECTS

A review published in Clinical Psychology and Psychotherapy in 2012 aimed to provide a well-defined classification system of psychotherapy side effects [2]. These are divided into Treatment-Emergent Reactions (TER) and Adverse Treatment Reactions. (ATR)

A treatment-emergent reaction (TER) is an unwanted negative event directly caused by the treatment itself. This could be due to treatment not being applied correctly, such as in the case of malpractice, or it could alternatively be attributed to being a side effect of adequately applied treatment.

However, it is often impossible to segregate these outcomes, as this would require sound judgment on the correctness of treatment employed.

Even when the choice of psychotherapeutic treatment course is a joint decision between patient and therapist, one question often raised is should the therapist recognise downstream side effects in the context of that particular psychotherapy?

In general, determining eligibility for pharmacotherapy, psychotherapy or any other form of therapy is part of the duty of a therapist.

Often, known ATRs are instead classified as therapeutic risks such as those qualified contraindications that are included when considering pharmacotherapy.

As such, a therapist should always inform their patients about any known therapeutic risks. Although an ATR may be unavoidable, the severity of the patient’s reaction could range from mild (crying in therapy) to very severe (attempted suicide).

If a therapeutic risk is not made clear before commencing therapy, this is likely to constitute malpractice.

PREVALENCE OF PSYCHOTHERAPY SIDE EFFECTS

To investigate the prevalence of psychotherapy side effects is difficult for many reasons. Any side effect could instead just be a negative development of the illness rather than caused by the treatment itself. With psychiatric disorders, there are natural fluctuations in symptomatology that can make treatment cause and effect difficult to determine.

Other variables include differences of opinion on expectations of treatment as well as what personally constitutes a positive or negative side effect.

Here, the relationship between patient and therapist is crucial as this is a known factor that can impact on the success of any treatment and how any side effect is perceived.

A cross-sectional survey of over 14,000 patients receiving psychological interventions showed that 5.2% reported lasting negative side effects [3]. This study did not explore the nature of these negative side effects and instead used multivariate statistical analyses to cover demographic factors and the type and form of therapy.

Other studies have shown that approx. 3-10% of patients become worse after psychotherapy with higher rates (7-15%) for patients with substance misuse. 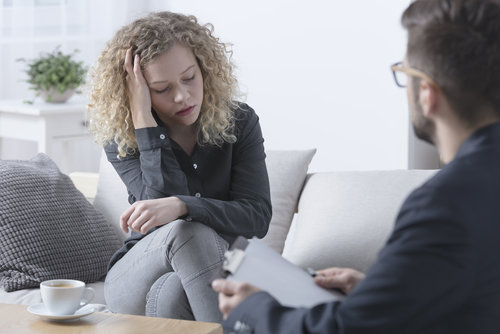 The emergence of new symptoms, which includes the development of interpersonal difficulties or issues within the family or at work are possible signs of a negative impact of psychotherapy.

Furthermore, the negative impact of psychotherapy may cause a significant decline or deterioration in existing symptoms. It is, therefore, reasonable to assume that assessment of negative changes should be implemented as routine assessment even when providing evidence-based care [4].

Despite recent interest in assessing and determining the negative effects of psychotherapy, there are very few treatment-specific adverse events that have been included in clinical research studies.

A review of RCTs in the literature from 1954 to 2014 shows there are only 132 eligible trials for which only 21% reported side effects. Furthermore, only 3% recorded these side effects [5].

One example studied trauma-focused CBT for PTSD in young children and showed that although it was effective and feasible, there were substantial side effects [6]. Of the 40 children, four children had experienced at least one negative event, such as fear of the dark, enuresis or encopresis as a result of the intervention.

In another example, behaviour therapy for Tourette’s syndrome was evaluated in 65 children and adolescents as an alternative to antipsychotic medication [7]. The study concluded that the intervention led to a significant improvement in symptoms. However, there were 200 adverse events reported. The majority ranged from mild to moderate and notably included increases in irritability, explosive behaviour, anxiety, and disruptive behaviour.

Dissociative Identity Disorder treatment uses suggestive techniques including recoveries of memories. There is some evidence that this can increase self- harm and aggressive behaviour.

Key risks of psychotherapy to the patient include

Determining what constitutes a negative side effect is complicated and requires qualitative and quantitative analysis of not only a patient’s symptomology but also their quality of life and other life domains.

The aim of the therapist is to improve the patient’s coping skills. However, in some psychotherapeutic relationships, a sick role may result due to secondary gain prolonging psychotherapy beyond what is necessary and sufficient. In such cases, the ending of psychotherapy can become a traumatic life event.

Some degree of dependence is necessary. However, it should not substitute or reduce patient self-mastery.

Psychotherapy is an efficacious cornerstone of current practice. The very potency of such therapy gives rise to risks that may not have been adequately appreciated, and thus there has been a tacit assumption by practitioners and patients that psychotherapy is largely devoid of risks. This may be a double blind. We suggest that there is a need for greater awareness and appropriate monitoring of risks, and that pursuit of this proposition will advance the risk benefit ratio of psychological treatments. (Berk & Parker)

Loading A Synopsis of the Side Effects of Psychotherapy – What Should Clinicians Know?

Linden M, How to define, find and classify side effects in psychotherapy: from unwanted events to adverse treatment reactions. Clinical Psychology and Psychotherapy. 2012

5. Definition, assessment and rate of psychotherapy side effects