The Neuropsychiatry of Multiple Sclerosis – What Should Psychiatrists Know?

Multiple sclerosis (MS) is an autoimmune disorder that is characterized by muscle weakness and numbness as well as problems with vision and bladder control. It is caused by the immune system attacking the nerve-insulating myelin sheath, which disrupts the communication between brain and peripheral parts of the body.

Oligodendrocytes are the cells that form the myelin sheath around nerve axons in the central nervous system (CNS). These cells are critical in the development of the brain as well as the correct functioning of the nerve cells. The myelin sheath they produce acts as insulation that protects long nerve projections as well as allowing the conduction of a nerve signal. 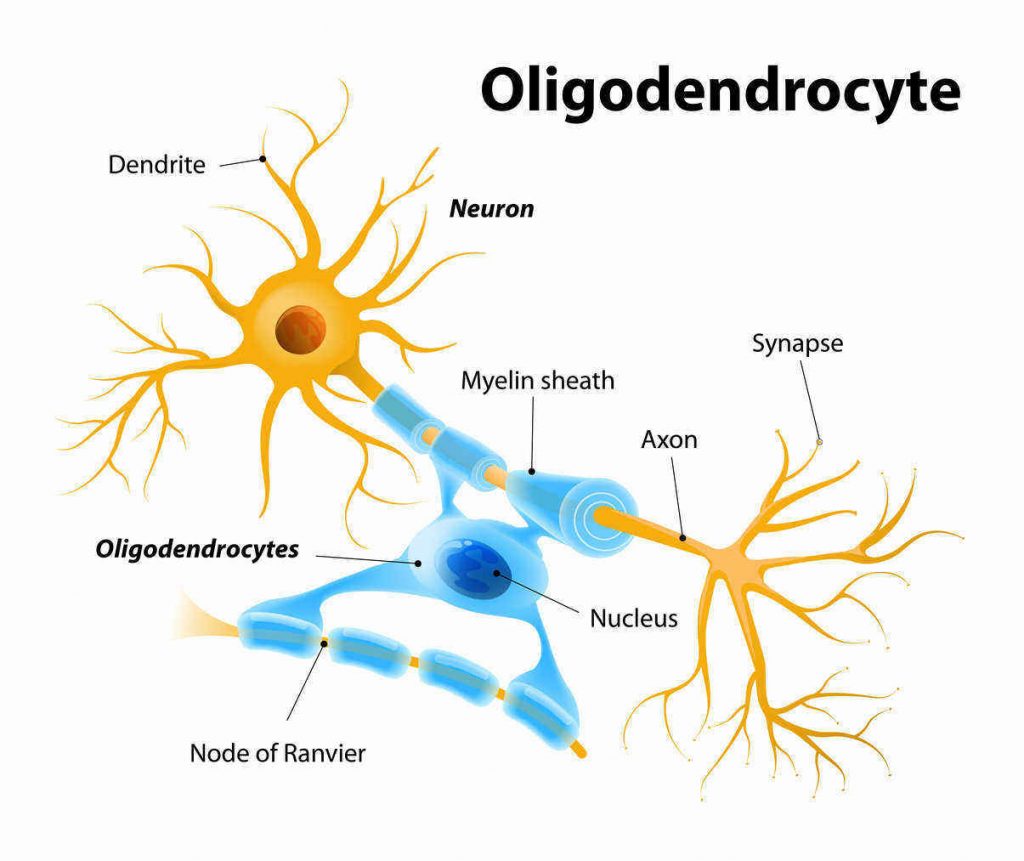 In MS, there is a loss of myelin in defined areas (lesion sites) in the brain and spinal cord. The disease is characterized by a large array of invading immune cells that attack and degrade the myelin sheath, the myelin producing oligodendrocytes and the nerve itself. These lesion sites develop with time and initially result in clinically benign symptoms but can progress in to profound disabilities. 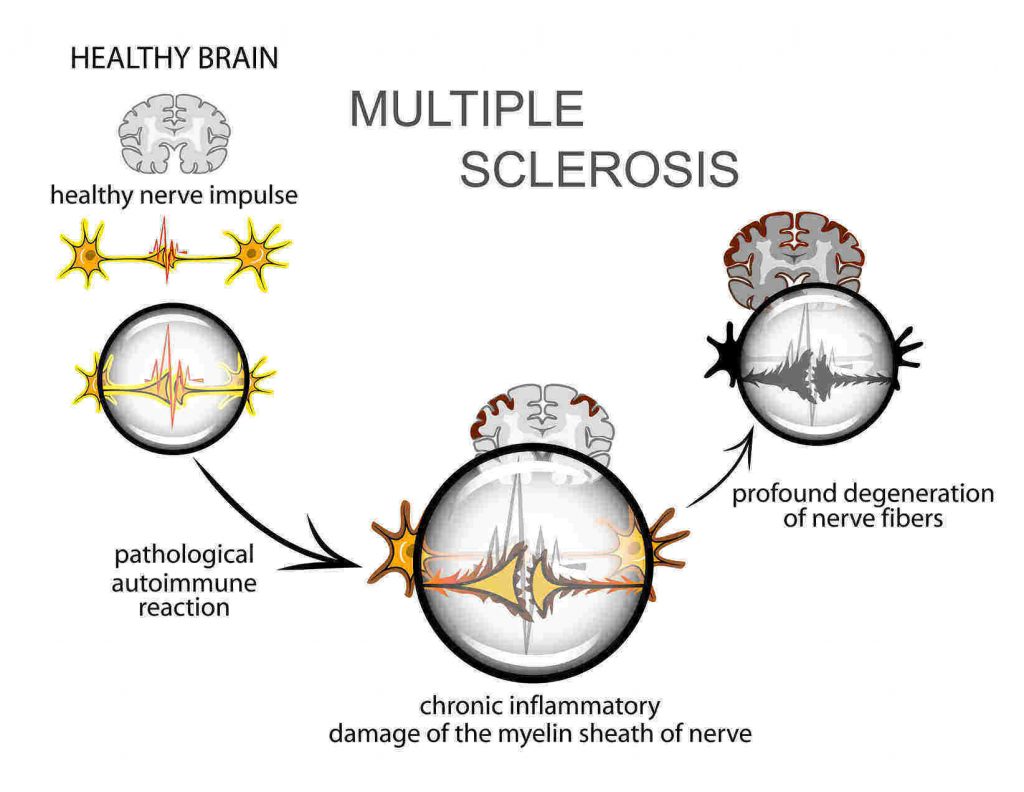 Most treatments for MS are immunosuppressive drugs that manage the symptoms without reversing neurological damage. Although they have shown efficacy, there is still a high demand for effective and safe treatments that focus on mitigating autoimmunity, stimulating regeneration and restoring lost functionality.

With most research into new treatments focusing on the neurological symptoms of MS, the presence of neuropsychiatric symptoms are often overlooked. There is however substantial evidence that a MS diagnosis can affect the mental health of these patients.

MRI of Brain in MS. (Images courtesy of Radiopedia) 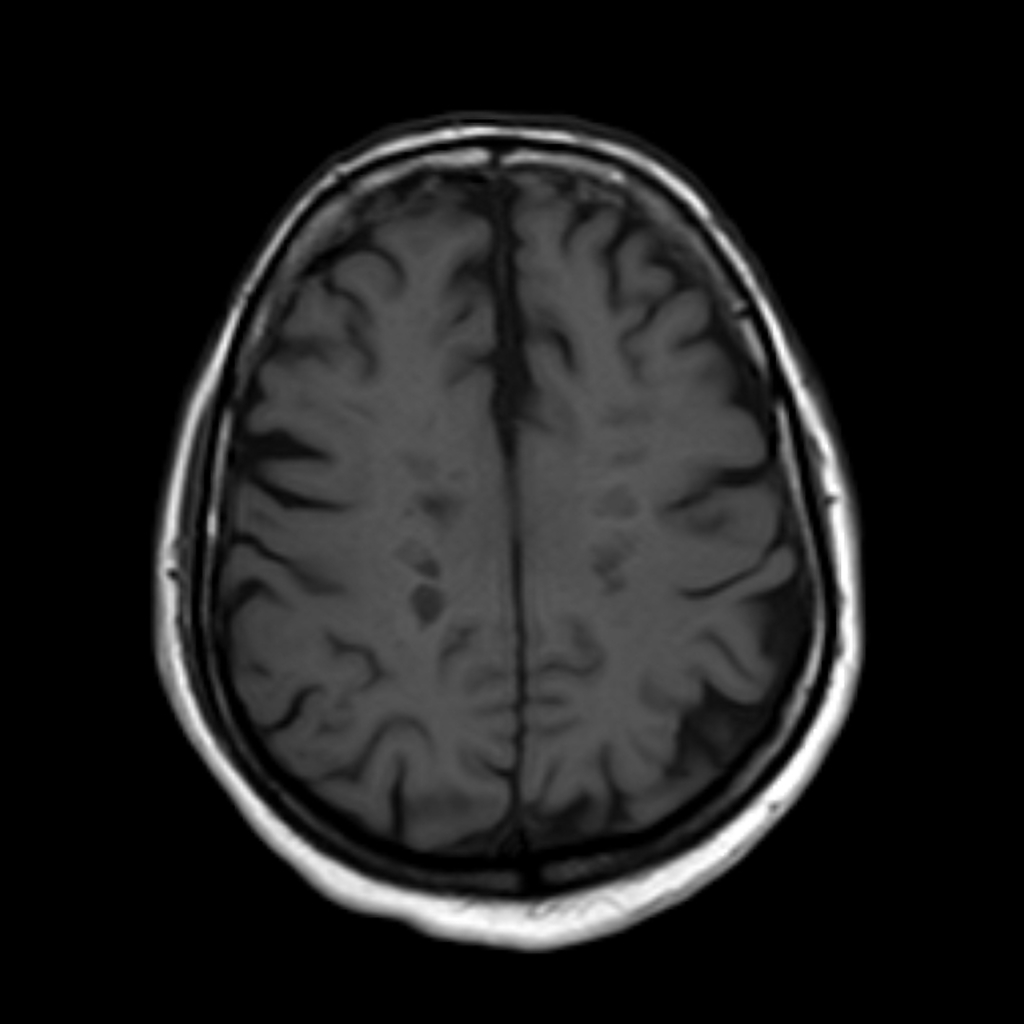 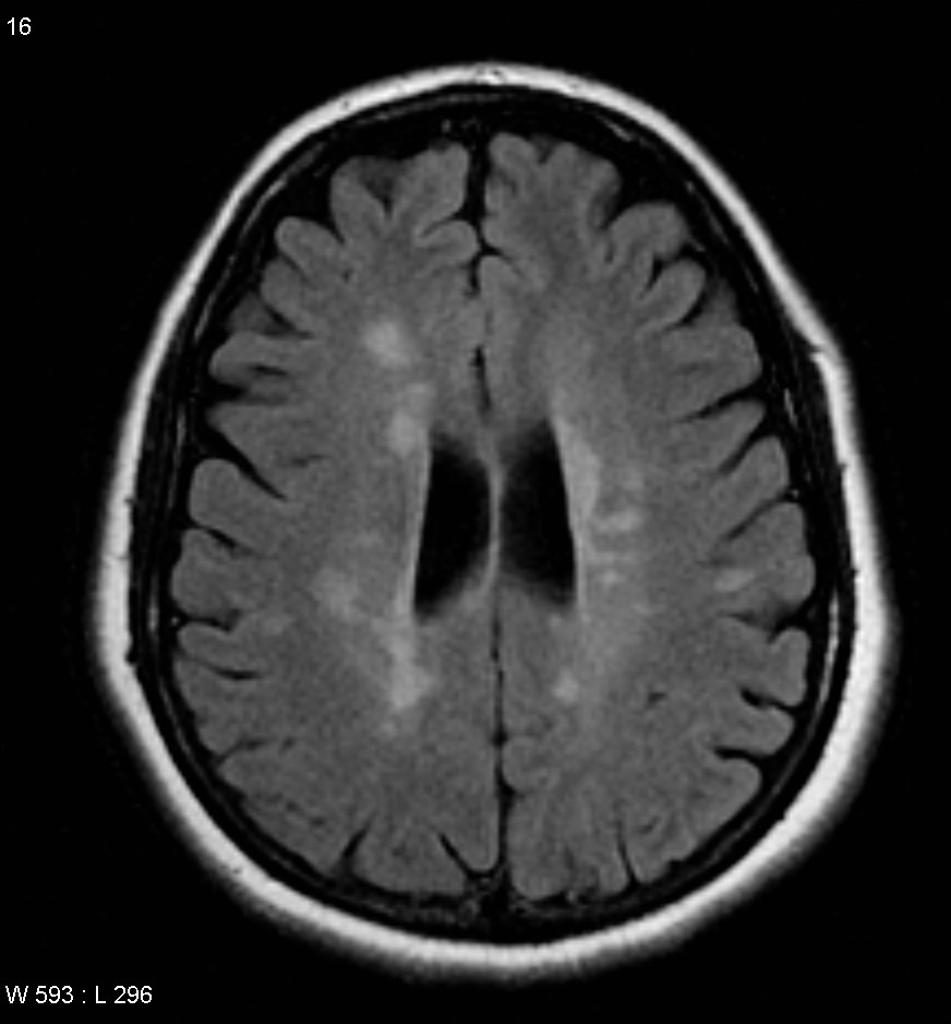 Hyperintensities on a FLAIR in the periventricular area

We previously covered the clinical and pathological significance of white matter hyperintensities.

Depression is a common problem in MS patients with the burden of adjusting to a chronic and progressive disease playing a significant role in a patient’s mental state. Uncertainty about the future, poor coping strategies and feelings of hopelessness are psychosocial determinants that have been suggested to account for up to 40% of depression diagnoses in patients with MS [2].

The clinical features of depression in cases of MS are essentially the same as that of symptoms observed in patients with major depressive disorder.

However, both MS and depression share several symptoms, such as fatigue, poor concentration and sleep issues, which can make a diagnosis of depression in MS difficult.

To make it easier for doctors to screen and diagnose depression in MS patients, rating scales such as the 7-item Beck Fast Screen for Medically Ill Patients can be used. This rating scale excludes physical symptoms that would normally confound other screening tools.

The etiopathogenesis of MS-related depression is likely to be multifactorial with biological and psychosocial variables present. It is suggested that there is a complex interplay between genetic predisposition, biological factors and individual circumstances that will contribute to the development of depression.

In neuroimaging studies, researchers showed that there was often a heavier lesion load in the medial inferior prefrontal cortex and the anterior temporal lobe [3].

Lesions in these areas were shown to be present in 40% of MS patient’s diagnosed with depression. This is suggestive of a biological correlation between demyelination of nerve fibres and psychiatric signs and symptoms.

Patients with MS are often prescribed a range of immuno-modulatory medications, and therefore treatments for depression are required to be complementary and show no contraindications.

Antidepressants and MS drugs may not always work in conjunction as side effects have been reported such as nausea, headaches and sexual dysfunction.

For example, desipramine was shown in a randomised controlled trial to be a modestly beneficial pharmacotherapy option for depression but had side effects that limited the dosage in the long-term [4].

However, in the short-term, desipramine and paroxetine are pharmacological treatments that have shown some efficacy in treating symptoms of depression without adverse effects in MS patients.

In addition, some MS pharmacotherapy options have been reported to have depressogenic effects, and therefore caution is recommended. For example, disease-modifying medications such as interferon beta-1a and beta-1b have been linked to the emergence of depression and suicidal ideation in some MS patients who have a history of depression [5].

Emotional instability is a common symptom, however, it is often unrecognized as being pathologically associated with MS. Emotional instability is instead often associated with stress, anxiety, and an inability to cope with the MS diagnosis. However, psychiatric comorbidities in MS requires greater clinical attention due to the negative effects psychopathology may have on MS progression.

Emotional instability is a broad term that can include various syndromes such as emotional lability, euphoric sclerotica and pathological laughing and crying (PLC). Although these often overlap, they are distinct and have their own emotional manifestations.

Emotional lability is often referred to as mood swings whereby there is a sudden and excessive response to relatively minor situations.

On the other hand, PLC is uncontrollable and often in response to non-specific situations and are disproportionate to the stimuli or trigger. Finally, euphoria sclerotic is a fixed mental state of positivity or optimism even in the presence of serious disability.

It is possible that MS lesions have developed in the regions of the brain that are involved with either emotional behavior or emotional self-control.

Furthermore, the type of emotional or behavioral change is dependent on the location and extent of lesions in the brain. For example, in the case of euphoria sclerotic, MRI has revealed that there is often the presence of a high lesion load in the prefrontal cortex.

Further to this, PLC is associated with various neurodegenerative disorders such as dementia, Parkinson’s disease and amyotrophic lateral sclerosis whereby there is significant atrophy in areas of the cerebellum.

The laughing and crying centers of the brain are located in the upper brainstem and involve cerebro–ponto-cerebellar pathways, both of which can be affected in MS.

Treatment for the range of mood disorders in MS normally involves SSRIs such as nortriptyline, fluoxetine and sertraline, which are all well tolerated. These agents are considered to be a first-line treatment with TCAs and monoamine oxidase inhibitors reserved for second line treatments [6].

Psychosis is reported to be very rare in cases of MS with a large study in Canada of over 10,000 MS patients showing that between 2 and 4 % would experience at least one psychotic episode [7].

However, a more recent epidemiological study challenges the belief that this is a rare occurrence given that it is two to three times more common in MS patients than it is in the general population [8].

However, most MS patients diagnosed with psychosis will show better response to treatment, fewer relapses and a better prognosis than the general population.

Although the first psychotic episode is often recorded after a MS diagnosis, it is unknown if they have a common pathophysiological process.

Structural MRI has suggested, although not definitively, that it may be due to a result of regional demyelination in the periventricular white matter that causes the onset of psychosis [9].

Alternatively, some researchers suggest it may be associated with medications such as corticosteroids and interferon-beta that modulate the immune system [10,11].

Interferon in particular was shown to exacerbate depressive symptoms and chronic use was associated with increased risk of suicide and increased emotional reactivity to transient stressors.

As individuals with MS can be more susceptible to side effects of medications, antipsychotics can produce strong sedation or be associated with extrapyramidal side effects (EPSE’s) such as acute dyskinesias and akinesia.

There have been few published trials in this area. According to the Maudsley Guidelines (11th Edition), risperidone, clozapine, olanzapine and quetiapine have been recommended as options.

Clinicians should be mindful of the risk of psychosis in patients receiving cannabinoids for MS and for steroid induced mania and psychosis.

The incidence of mania in patients with MS is also higher than the general population.

Bipolar disorder is common in multiple sclerosis patients and often presents later in the course of MS.  Moreover, treatment with steroids itself can precipitate a manic episode but the risk of developing bipolar disorder in MS is independently doubled in MS patients.

Involvement of the orbitofrontal prefrontal cortex circuit leads to symptoms of impulsivity, mood lability, disinhibition and personality changes, which are present in acute mania.

Valproate and atypical antipsychotics are preferred compared to Lithium which can lead to diuresis. Clinicians should be mindful of the possibility that mood stabilisers can exacerbate cognitive side effects.

Fatigue is a common symptom and can affect up to 80% of patients.

Neurophysiological studies have revealed an impairment of volitional drive to the descending motor pathways and functional imaging studies indicated a selective involvement of frontal cortex and basal ganglia.

Thus, the physiopathology of fatigue may rely on dysfunction of circuits involving thalamus, basal ganglia, and frontal cortex which could have been affected either directly due to the structural involvement or indirectly due to the substrates of the inflammatory process. [12]

CBT is known to reduce fatigue scores. Amongst pharmacological strategies, amantadine and modafinil have been highlighted.

It is reported that between 30 – 70% of MS patients will begin to show cognitive impairments at some point of the disease process. Depending on the location of brain lesions, MS patients can often experience a diverse range of symptoms that are usually associated with subcortical dementia.

Although overt dementia in MS is rare, cognitive impairment can still severely impact memory formation as well as the overall quality of life of MS patients and their families.

As MS progresses, there is an increased loss of cognitive functionality with many patients reporting episodic memory, slow thought processing, forgetfulness, and some degree of intellectual impairment.

Structural MRI analysis of MS patients with cognitive impairment has revealed that MRI hypodensities can range from small regional lesions in the subcortical grey matter to more severe atrophy that reflects a more global degeneration in both cerebral hemispheres.

The neurological damage associated with these brain regions is then likely to be associated with progressive deficits in executive functioning and increases in neuropsychiatric manifestations.

As with all forms of neurodegeneration, there are no specific treatments that can totally repair the neurological damage inflicted. However, some researchers have suggested that MS disease-modifying treatments such as interferon-beta can ameliorate some cognitive deficits in attention and visual learning [13].

In addition, some researchers have suggested that by combining anti-inflammatory and immunosuppressive agents such as cyclophosphamide and methylprednisolone, that this could improve global cognitive deficits in MS patients [14].

The awareness and treatment of neuropsychiatric disorders in MS is improving with the development of new research tools that allow scientists to focus on the problems that cause MS-associated emotional and behavioral disturbances. It is important for clinicians to be vigilant for the emergence of neuropsychiatric disorders in MS and proactively treat them.

Loading The Neuropsychiatry of Multiple Sclerosis – What Should Psychiatrists Know?

2. The relationship between disability and depression in multiple sclerosis

Lynch S et al., The relationship between disability and depression in multiple sclerosis: the role of uncertainty, coping, and hope. Multiple Sclerosis. 2001

5. The link between multiple sclerosis and depression.

7. Psychotic disorders in MS: population-based evidence of an association

8. The spectrum of psychosis in multiple sclerosis

11. Psychiatric side effects of interferon-beta in multiple sclerosis

12. Physiopathology of fatigue in multiple sclerosis.

13. Effect of interferon-beta-1b on cognitive functions in multiple sclerosis

Barak Y and Achiron A, Effect of interferon-beta-1b on cognitive functions in multiple sclerosis. European Journal of Neurology. 2002