Is the Oral Contraceptive Pill Associated with Depression?- A Synopsis of The Impact of OC Pills on Mood

Throughout the history of medicine, thousands of drugs have been developed, but only one has been influential enough to earn the title of simply, the pill. Introduced in May 1950, the oral contraceptive pill is a medical innovation that has dramatically transformed generations. Women have gained incredible freedom and reproductive autonomy. The birth control pill separated sexual practice from conception, forcing re-assessment and reevaluation of social, political, and religious viewpoints.

The first real large-scale trial of the pill was conducted in 1956 in Rio Piédras, a Puerto Rican housing project. The 200-plus women involved in the trial received little information about the safety of the product they were given, as there was none to give, and no one thought that it might be necessary to provide such information. That was the standard of the day. Women who stepped forward to describe side effects of nausea, dizziness, headaches, and blood clots were discounted as “unreliable historians.”Despite the substantial positive effect of the pill, its history is marked by a lack of consent, a lack of full disclosure, a lack of true informed choice, and a lack of clinically relevant research regarding risk. These are the pill’s cautionary tales. [Liao P & Dollin J, 2012]

Hormonal contraception is available in oral pills and formulations stored within a device such as a transdermal patch, vaginal ring or a subcutaneous implant. As for contraceptives, they all provide an effective and safe method for the prevention of pregnancy. Regardless of formulation, expected failure rates are <2%. However, typical failure rates are between 3-5% due to accidental non-compliance. [Frye C, 2006] 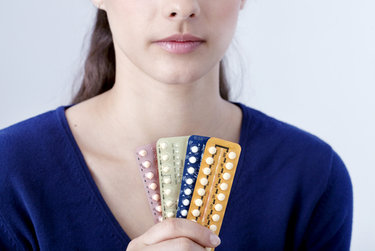 Modern COCs contain much lower levels of estrogen, and progestin, and are typically deemed to have little effect on the physical and mental health of the user.

The COC pill typically contains between 0.02 and 0.04 milligrams of ethinylestradiol as well as different types and amounts of synthetic progestin.

Contraceptives can also be monophasic or multiphasic.

Multiphasic – have varying dosages of hormones throughout a 3-4 week cycle. Multiphasic preparations were originally designed to provide effective contraception without overexposure to progestin alone.

Hormonal contraceptives can be orally consumed or in the form of a contraceptive device. The route of administration may also play a role in observable adverse side effects.

For instance, users of the vaginal ring have reported less emotional lability when compared to oral contraceptive users.

However, the data in the literature is conflicting. There are as many studies showing nothing significant between different contraceptive formulations as there are studies showing differences in side effects. [Schaffir J et al.,2016 ]

Taken together, the constituents, dosage, the pattern of dosage (monophasic or multiphasic) and the ratio of progesterone to estrogen are all variables that can change the outcome on mood.

MECHANISM OF ACTION OF ORAL CONTRACEPTIVES

Modern hormonal contraceptives have multiple biological effects with the primary objective to manipulate events throughout the ovulatory cycle. 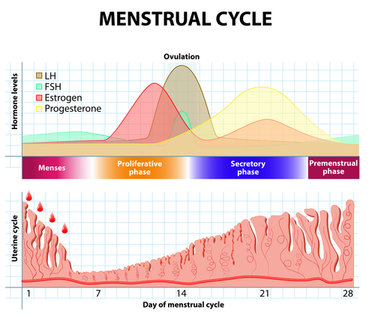 For some, the primary mechanism is to inhibit follicular development while for others it is to either inhibit ovulation or change the cervical mucus to inhibit sperm penetration. 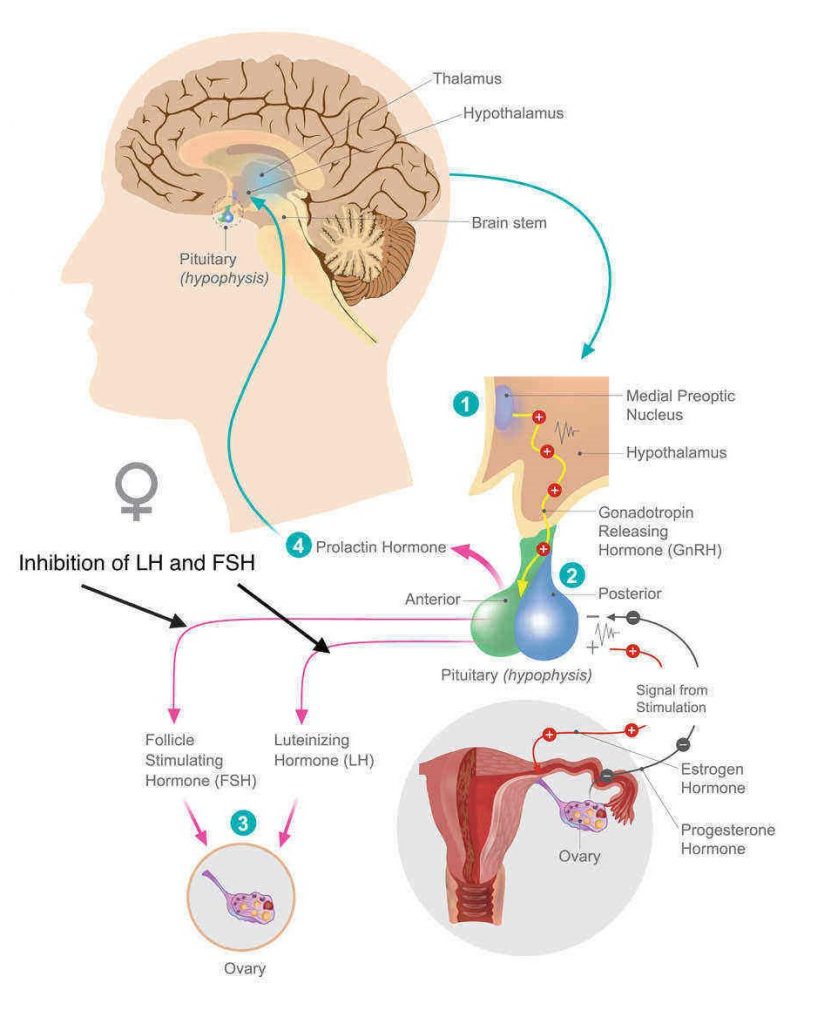 FEMALE HORMONES AND THE BRAIN

Both estrogen and progesterone influence the brain in many different ways.

Following are some of the key mechanisms of action of ovarian hormones on the brain:

ORAL CONTRACEPTIVES AND THE BRAIN

Synthetic sex steroids that are used in hormonal contraceptives are associated with functional and structural changes in the brain that affect cognitive performance, behaviour, personality and emotion.

There are several proposed mechanisms on how hormonal contraceptives affect the brain and behaviour.

Hormonal contraceptives have been on the market since 1960 and have been prescribed to at least 100 million women worldwide. However, the effect of sex steroid contraceptives on mental health is under-researched and what has been published shows conflicting evidence.

This is in contrast to anabolic steroids, which have been well researched and show significant structural and functional changes to the brains of steroid users.

Progestin-only forms were originally more favourable because they were longer acting and required less compliance from the user.

Today, newer formulations of progestin-only contraceptives contain synthetic progestins that are similar to progesterone but have a higher specificity and fewer reported side effects.

In one study researchers analysed the effect of progestin-only contraceptives on the mental health of women.[Westhoff C et al.,1998]

Results showed that 93 of 910 women in the study dropped out due to significant negative health issues. Further analysis of these women six months later showed that they had higher depression scores than those who remained in the study.

In another similar study, by the same researchers, 218 out of 495 women dropped out of the study while testing another progestin-only contraceptive (Depo-Provera containing medroxyprogesterone acetate). [Westhoff C et al., 1998]

The reason for dropping out was attributed to higher depressive scores. In contrast, those that remained in the study had a positive change in mood scores on follow-up. Thus, it appears that for some, progestin-only contraceptives may worsen mood but only in women who are susceptible to it.

A study published in 2016 in JAMA Psychiatry investigated whether using hormonal contraception was associated with future use of antidepressants.[Skovlund C et al.,2016]

This was a very large prospective cohort study that included 1,061,997 women with an average age of 24 years. By comparing users of hormonal contraception with non-users, the researchers found contraceptive users were 23% more likely to be prescribed antidepressants at a later date.

Although it is difficult to draw firm conclusions from the literature as a whole, these new findings are suggestive of a clinical association between hormonal contraceptive use and future adverse mood affects.

Our findings suggest that adolescence may be a sensitive period during which OC use could increase women’s risk for depression, years after first exposure. [Anderl C et al., 2019]

They prevent unwanted pregnancies, exert improvements in the menstrual cycle, and in some cases, reducing mood swings and may relieve mental health issues such as anxiety.

However, the literature also presents many health risks of oral contraceptives. Concerns are primarily about an increased risk of cardiovascular diseases and increased risk of affective mood disorders and depression.

Overall, family planning is key to safe population growth, but healthcare professionals should be mindful of the risk of adverse effects when prescribing hormonal contraceptives.

Identification of patients that are vulnerable to these risks through measuring baseline hormonal levels, assessing hormone sensitivity through menstrual cycle mood history and a history of previous mental health issues is critical.

As we celebrate the more than half a century of the pill, we can reflect on its legacy and its importance for patients, their families, and the planet, which logged its 7 billionth inhabitant in the fall of 2011. We can recall the cautionary tales it told from its origins to its current variations. The pill led the way but we need creative exploration of choice, access, and safety in controlling fertility for the future. (Liao, 2010)

Loading Is the Oral Contraceptive Pill Associated with Depression?- A Synopsis of The Impact of OC Pills on Mood

1. Half a century of the oral contraceptive pill

2. An overview of oral contraceptives: mechanism of action and clinical use

Frye C. An overview of oral contraceptives: mechanism of action and clinical use. Neurology. 2006

3.Combined hormonal contraception and its effects on mood

4.Estrogen actions in the brain

Steroid hormones and their action in women's brains: the importance of hormonal balance.

7. The role for vitamin B-6 as treatment for depression

William A et al., The role for vitamin B-6 as treatment for depression: a systematic review. Family Practice. 2005.

11.Association of hormonal contraception with depression.