The mental state examination [MSE] is an integral, and essential, skill to develop in a psychiatric evaluation.  The undertaking of an accurate MSE helps elicit signs and symptoms of apparent mental illness and associated risk factors.

The psychiatrist must be first and foremost and all the time a physician… In fact, psychiatry is neurology without physical signs, and calls for diagnostic virtuosity of the highest order… The simple fact (is) that a psychiatrist is a physician who takes a proper history at the first consultation. [Henry Miller, Neurologist, 1969, Address at the WPA]

Key principles in the approach to MSE:

It is also important to ask the patient if they find attending to their personal care difficult in any way, if they need prompting or if they require help physically doing so. 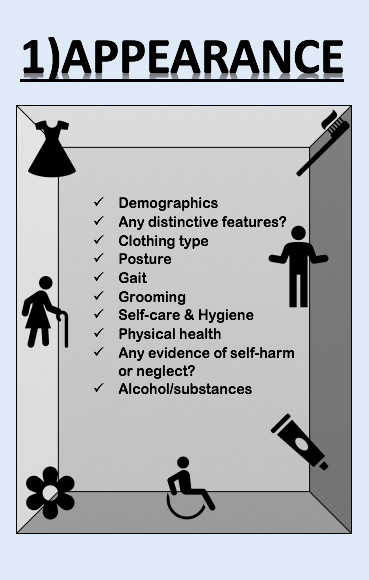 A patient’s non-verbal communication may indicate some insight into their current mental state. Behaviour is commonly misinterpreted in mental health services and should never be described in a stigmatising or patronising way such as ‘good’, ‘odd’ or ‘attention-seeking’. Use language that is constructive, useful and specific. 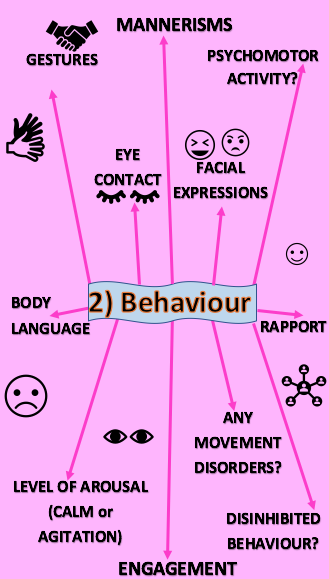 They may indicate underlying organic conditions or medication-related side effects. if patients are on antipsychotic medications a full extrapyramidal side effect exam should be carried out. (See videos at the end)

Speech is assessed by observing and listening to the patient’s spontaneous speech. 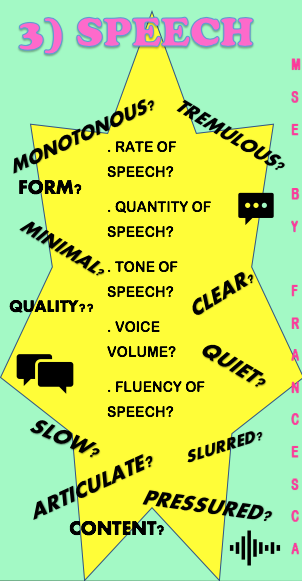 Neurological conditions such as stroke or dementia can present with aphasia (the inability to comprehend or formulate language because of damage to specific areas of the brain.)

Aphasia can also be a result of brain tumours, infections or neurodegenerative diseases).

People with autism spectrum disorders may have abnormalities in paralinguistic and pragmatic aspects of their speech.

Are any of the words used ‘made up’ [neologisms]?

Gross disorganisation of speech could indicate a psychotic disorder. Speech content should be noted in the thoughts section of this MSE.

Mood and affect are both related to emotion, but they are different.

Both the subjective and objective aspects of mood should be assessed.

The mood is the patient’s pervasive and sustained emotional state and usually shows the underlying emotion of the person. 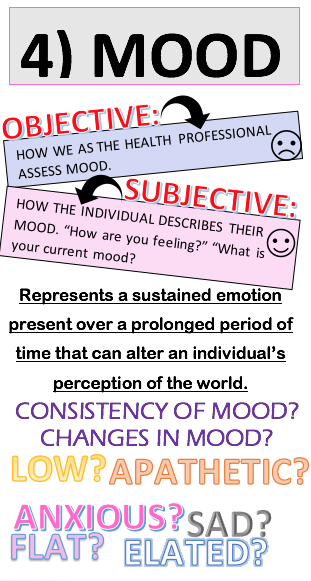 Objective (How we observe and describe their mood):

Subjective (As reported by the patient and observed by the examiner):

Ask the patient to describe how they are feeling and if they are experiencing any biological symptoms as a result of their mood-for example, insomnia or appetite. Make sure you note their exact words and verbatim. Example questions to encourage a subjective answer:

How have you been feeling recently?

How have your energy levels been?

Have you been sleeping and eating well?

Have you felt irritable, angry, depressed, discouraged or unmotivated recently?

Affect is a patient’s moment to moment expression.

This is assessed through posture, movements, body, facial expressions and tone of voice.

You do not ask any questions in this section; it’s purely observational. 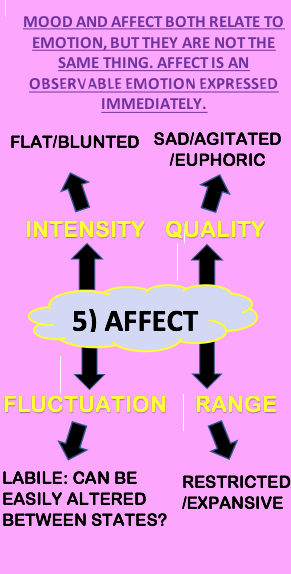 Example questions to assess thought include:

What’s been on your mind recently?

Are you worried about anything?

Have you felt that life isn’t worth living?

Do things seem unreal to you?

Do you think anyone is trying to harm you?

Are there thoughts that you have a hard time getting out your head?. 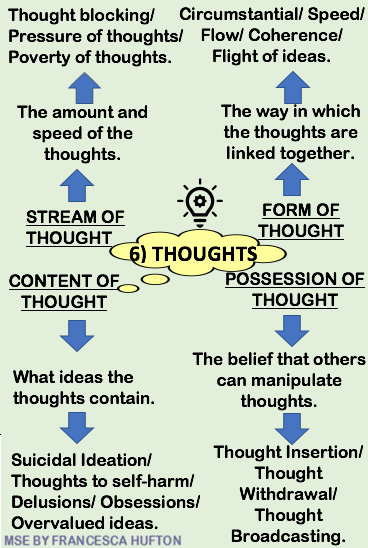 It tends not to have a bizarre quality.

Ideas of reference and Delusions of Reference:

The process of becoming aware of what is presented to the body through the body’s sense organs. It is also important to consider other health conditions such as autoimmune diseases, which can mimic mental illness and can change a person’s perceptions. [Autoimmune conditions masquerading as psychiatric illness]

Hallucinations can be divided based on 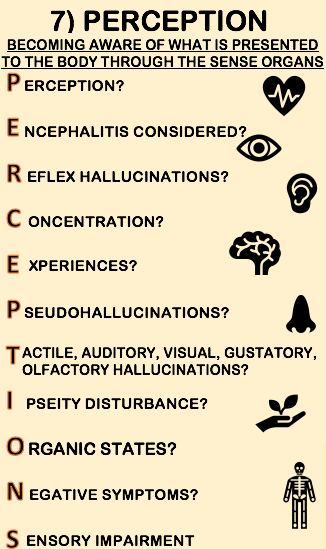 A recent work by Wearne and Genetti recommends that ‘pseudohallucinations’ or hallucinations described in non-psychotic illness like PTSD and complex trauma are often difficult to differentiate from hallucinations in Schizophrenia phenomenological. [Wearne & Genetti, 2015]

However, hallucinations in Schizophrenia are more likely accompanied by a complex delusional system.

The voices were also more likely to be critical and negative towards the individual, consistent with the experience of abuse in people with PTSD.

This section of the MSE covers the patient’s level of orientation, attention, memory, alertness and visuospatial functioning. 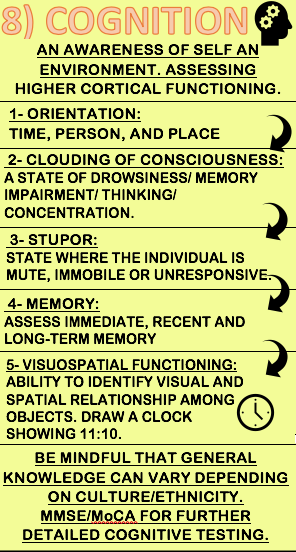 Very Important: Please ensure that you are mindful of language barriers, age and ability for accurate and fair testing.

What time was your appointment with me today?

What did you do last night?

What date did you get married?

What school did you go to?

Give the patient objects to remember and then ask them to repeat them back to you (Refer to the Mini-Mental state examination or MoCA for detailed assessing). 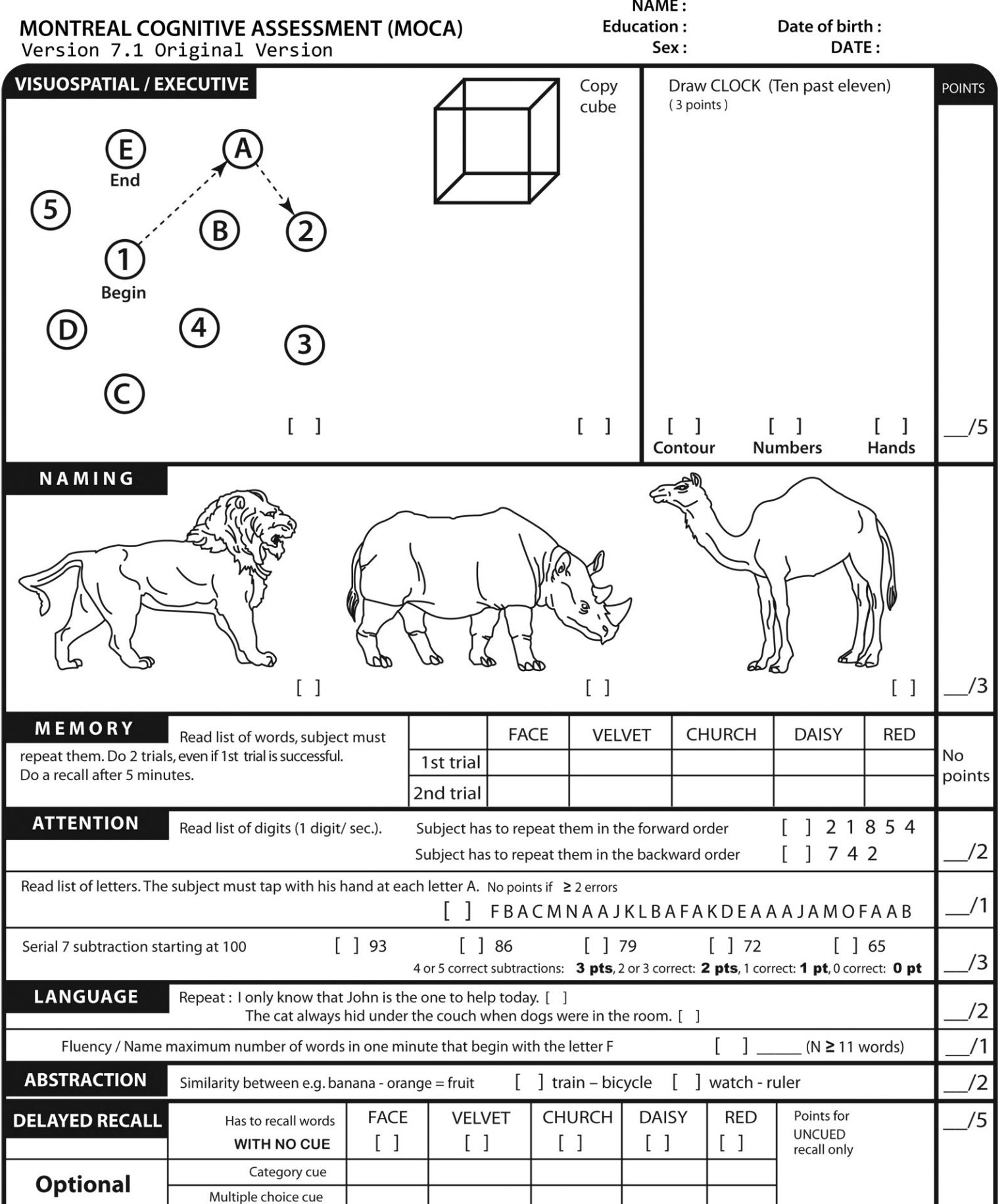 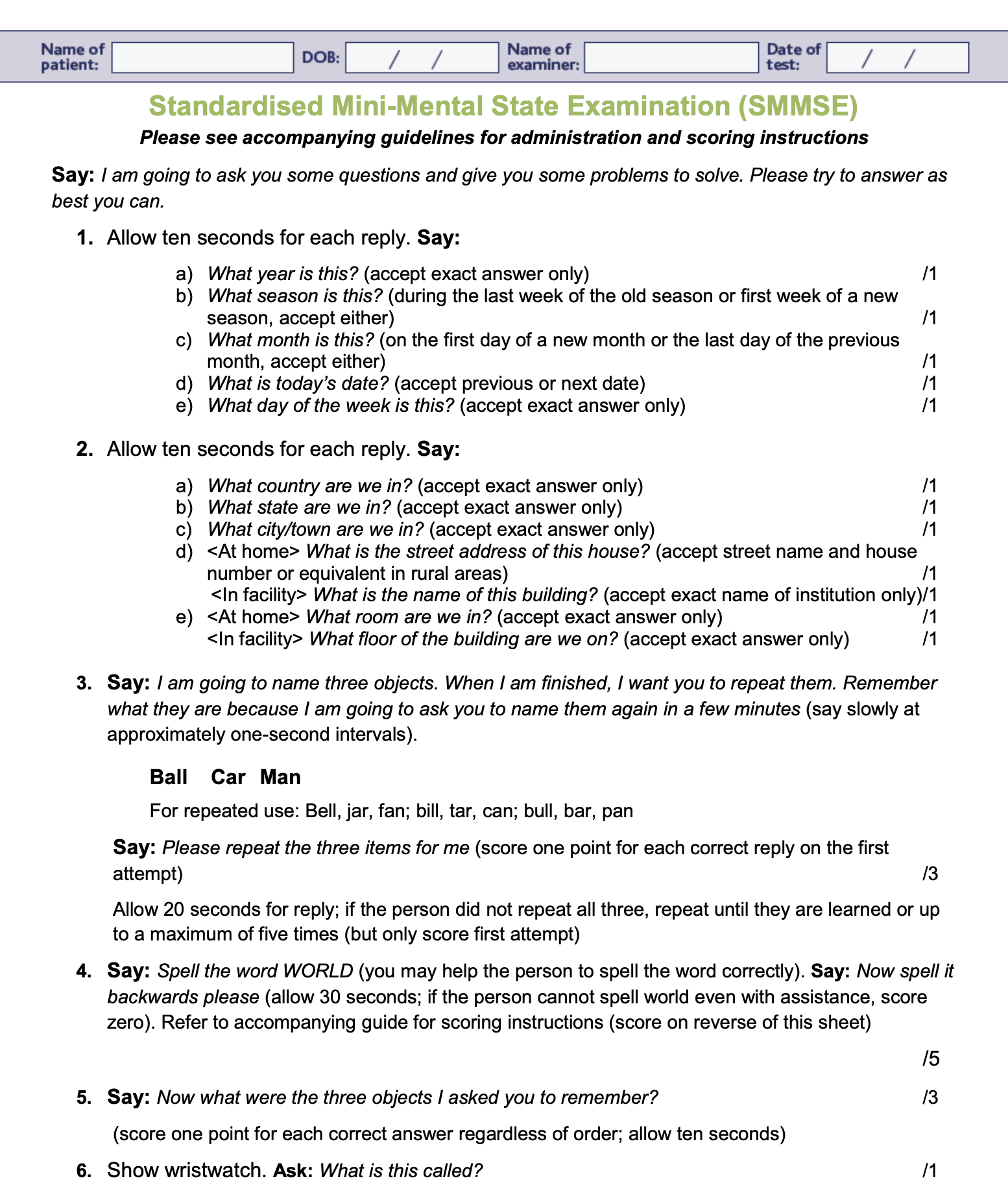 The patient’s understanding of their mental health problem is evaluated by gathering as much information as possible from their perspective. Judgement is assessing the patient’s general problem-solving ability. 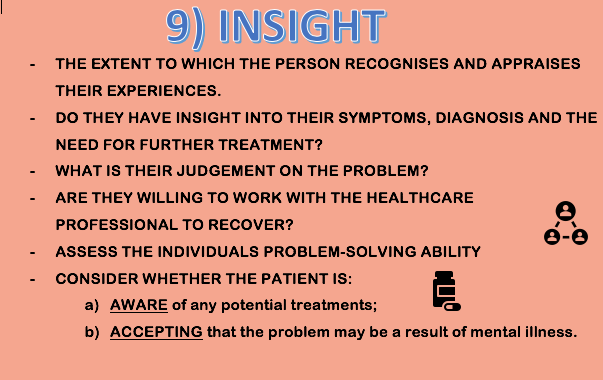 Important: Having insight into a problem does not necessarily mean that their mental health is okay.

Six levels of insight have been described:

Determining the degree of insight helps in predicting likelihood of compliance with treatment. 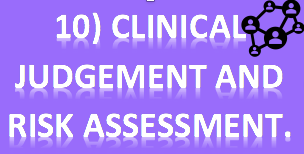 Key aspects of a risk assessment:

AND LAST, BUT NOT LEAST….

Thank the person for their time meeting you today and for being open with you. Explain what will happen next! 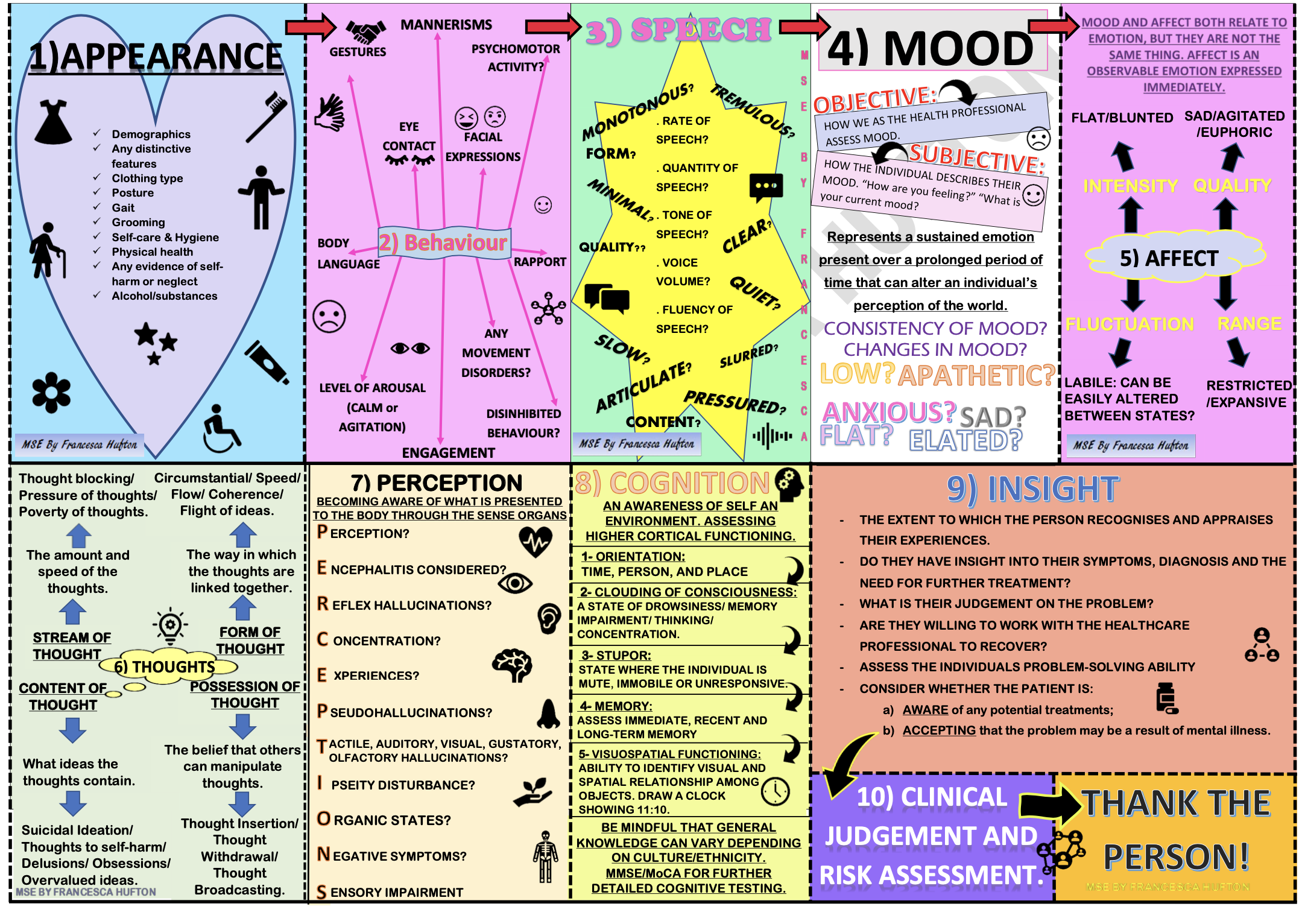 The following videos are sources from psychinterview.com, which is an educational website with 90+ videos that specialises in enhancing psychiatric interviewing, psychoeducation and diagnostic skills.

The psychopathology of NMDAR-antibody encephalitis in adults: a systematic review and phenotypic analysis of individual patient data

Study of visuospatial skill in patients with dementia

How to approach the mental state examination

Extreme overvalued belief and the legacy of Carl Wernicke.