Synaptic Pruning and Schizophrenia – Role of Microglia and Future Directions

Synaptic pruning is an important developmental process that refines and optimises neuronal transmission.

In the healthy developing brain, this process is performed by the brain’s resident population of microglial cells. Microglia are commonly referred to as the immune cells of the CNS; however, they are dynamic and responsive cells that contribute to many physiological functions in the brain [Casano and Peri, 2015]: 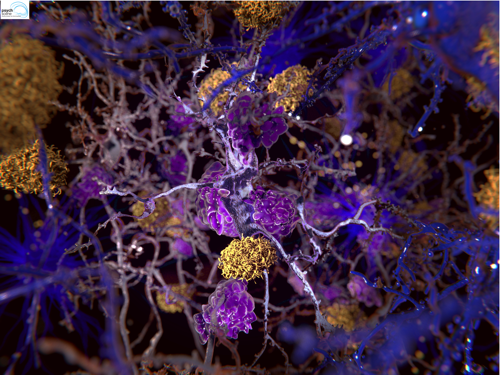 The yellow plaques are amyloid plaques, with the purple cells being the microglia. 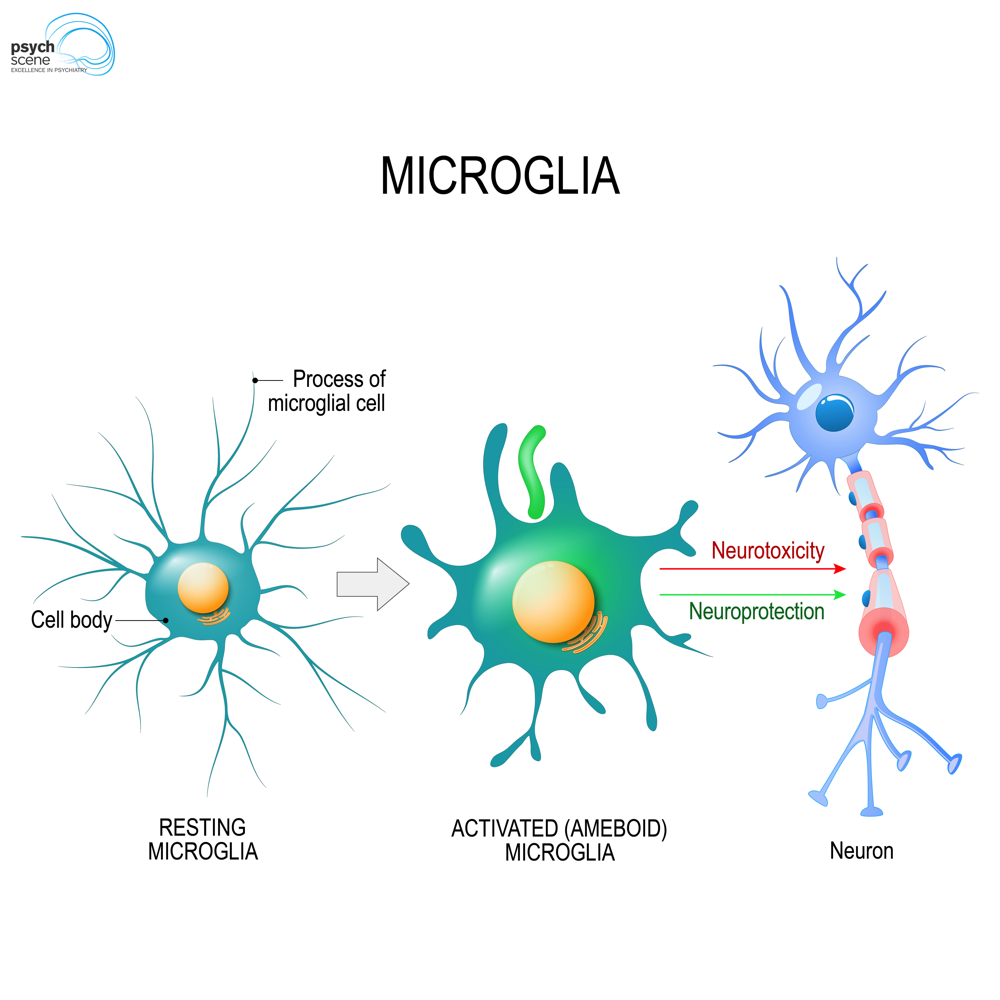 One of the specialised roles of microglia is to prune developing synapses, thus regulating synaptic plasticity and function. [Holtmatt and Svoboda, 2009]

From the earliest embryonic stage, the brain develops more neurons and synapses than are functionally needed:

The complement cascade has traditionally been viewed as an integral part of the immune system whereby it augments an antibodies’ antibacterial activity. However, the complement system has also been documented to be associated with the remodelling of neuronal connections and the process of synaptic pruning. [Stevens et al., 2007]

During microglial-mediated brain development, the C1q ligand is expressed on the surface of synapses and functions as a signal to microglia for destruction. C1q-mediated synaptic pruning has also been recently described in early-stage synapse loss in Alzheimer’s disease and frontotemporal dementia. [Hong S et al., 2016], [Lui et al., 2016]

A previous study showed a strong association between the DNA region on chromosome 6, which codes for complement component 4 (C4) and schizophrenia. [Sekar et al., 2016]

C4 plays a key role in the pruning of synapses during a key time in the development of the brain. Researchers found that the genetic variation of C4 strongly correlated with the presence of schizophrenia. [Read the summary here]

Since Feinberg first reported in 1982 that schizophrenia might be a result of “…a defect of synaptic elimination programmed to occur during adolescence” [Feinberg, 1982-1983], human clinical, epidemiological, neuroimaging, and post-mortem data have provided evidence that schizophrenia is a neurodevelopmental disorder caused by dysfunctional synaptic elimination [Faludi and Mirnics, 2011]:

However, despite these observations, there is no clear evidence of neuronal loss or degenerative changes in patients with schizophrenia. [Thune et al., 2001]

Instead, it is suggested that the reduction in synaptic density results in lower grey matter volumes. [Lewis and Levitt, 2002]

Although, neural development, disruptions to energy homeostasis, genetic predisposition, immunological processes, and environmental factors are also likely to contribute and uniquely influence synaptic connectivity for each patient. Therefore, when taken together, this could explain the symptom heterogeneity of schizophrenia when considering the neurodevelopmental hypothesis of schizophrenia.

In this groundbreaking study:

Minocycline is a semi-synthetic second-generation tetracycline that is effective against gram-positive and gram-negative infections. However, it is also often prescribed for inflammatory disorders such as rheumatoid arthritis due to its ability to suppress inflammatory mediators (e.g. nitric oxide). Minocycline has also previously been suggested to be neuroprotective by reducing macrophage/microglial activation. [Stirling et al., 2005]

Read about Minocycline in Depression.

The aetiological involvement of microglia and the immune system in human neurological and psychiatric disorders has garnered significant interest recently.

Although more work is needed, microglia-mediated synaptic elimination may become an important therapeutic target in the prevention of disorders like schizophrenia.

Microglia: multitasking specialists of the brain

Innate immunity and neuroinflammation in the CNS: The role of microglia in Toll‐like receptor‐mediated neuronal injury.

Neural activity and the dynamics of central nervous system development

Schizophrenia: caused by a fault in programmed synaptic elimination during adolescence?

Synaptic changes in the brain of subjects with schizophrenia

The quantitative neuropathology of schizophrenia

Synaptic loss in schizophrenia: a meta-analysis and systematic review of synaptic protein and mRNA measures

Thune J et al., No deficit in total number of neurons in the prefrontal cortex in schizophrenics. J Psychiatr Res. 2001; 35:15–21.

Schizophrenia as a disorder of neurodevelopment

Minocycline as a neuroprotective agent

The effect of minocycline on symptoms in schizophrenia: Results from a randomized controlled trial

Rate this psychinsights
Number of Views: 3,303