Switching or Augmentation Strategies in the Treatment of Major Depressive Disorder – What Does the Evidence Tell Us?

Switching seems to be the favoured strategy, with 85% of psychopharmacologists endorsing switching and 11% endorsing augmentation in one study. [Goldberg et al ., 2015]

However, there is no clear consensus about the most optimal strategy.

In this article, we examine the evidence for switching vs augmentation strategies in managing major depressive disorder after an initial non-response to AD.

WHAT DOES STAR*D TEACH US?

Other studies indicate that at least 30% of patients will either not respond to or only partially respond to their initial treatment, irrespective of the antidepressant. [Bauer et al., 2013]

After the initial SSRI treatment following were the strategies employed at different levels.

Key points from STAR*D about Switching or Augmentation: [Rush, 2007]

Since remission must be the goal of treatment—a notion clearly supported by the STAR*D follow-up results—different combinations/augmentations at the first or second steps might well increase remission rates in more patients, either because different drugs target different patients or because the combination/augmentation is simply a pharmacologically more powerful and broader spectrum antidepressant.

The gap between what we do in practice and what we know is very large. We insist that remission is our goal, yet we do not routinely carefully measure symptoms in practice to determine if remission occurs. Yet we know that “better but not remitted” consistently leads to a worse prognosis than full remission. We often underdose or poorly titrate medication. Finally, we often combine treatments in practice, yet very few trials have assessed either safety or efficacy of these efforts. Analogous to treating hypertension, diabetes, or many other medical conditions, our patients deserve every chance to reach remission. “Less hypertensive” is not the goal of treatment of hypertension. Nor should “less depressed” be the goal for our depressed patients. [Rush, 2007]

Therefore, although the STAR*D reports have been incorporated into treatment guidelines worldwide, they do not include more recent clinical evidence on pharmacologic adjuncts, such as atypical antipsychotics or psychostimulants.

This included switching to bupropion-SR (sustained-release) or augmenting current treatment with bupropion-SR or aripiprazole, an atypical antipsychotic, after patients failed at least one antidepressant trial.

The study—VA Augmentation and Switching Treatments for Improving Depression Outcomes (VAST-D)—was a multisite, randomised, single-blind, parallel-assignment trial that involved 1552 patients that were unresponsive to at least one course of antidepressants.

Aripiprazole Dose: In the augment-aripiprazole group, the initial dose was 2mg and this was titrated to 15 mg aripiprazole.

Of the 7234 patients (Patients were 85% male and 15% female) screened for antidepressant-resistant MDD, 1522 were randomised to one of the three treatment groups:

Withdrawal due to lack of treatment response:

There were 4356 non-serious AEs recorded, and the common side effects in each group were:

165 patients experienced 207 serious AEs, including eight deaths during or within 30 days of the study, including one completed suicide. However, the researchers concluded that none of the deaths were related to the study medication.

HOW LONG SHOULD ONE WAIT FOR RESPONSE AFTER INITIATION OF AN ANTIDEPRESSANT?

According to the Windows of Antidepressant Response Paradigm (WARP), response to treatment can be conceptualised into three distinct periods: [Malhi et al., 2020]

Observations strongly support the 2-week principle. Increasing evidence suggests that many patients with MDD show an improvement in symptoms within 2 weeks of starting treatment. [Blier, 2009]

This two week duration is important as early responders are at least three times more likely than others to become sustained responders. [Stassen et al., 2007]

Since lack of early response is predictive of poor response later, and poor response adversely affects disease course and can result in chronicity, lack of improvement within 2-4 weeks should alert us to the need for prompt change in therapy. [Kudlow et al., 2014]

We suggest that clinicians should think about the possible need to change treatment as early as 1 week and certainly consider it after 2 weeks of non-response. Waiting for 4 weeks is, in our opinion, too long. [Baune & Falkai, 2021]

The Treatment Algorithm Group from Australia and New Zealand :

A recent large prospective study suggests that switching to mirtazapine from sertraline is more beneficial than escalating the dose of sertraline. [Kato et al., 2018]

Furthermore, switching between escitalopram and nortriptyline (in either direction) may be beneficial if the initial medication is ineffective. [Köhler-Forsberg et al., 2019]

However, contrary to these findings, a systematic review of three randomised controlled studies that compared switching vs continuation of the same antidepressant failed to show any significant overall advantage for switching. [Bschor et al., 2018]

Despite a limited evidence base to support this strategy, switching medication, and using an antidepressant from a different class, is a common and worthwhile strategy for managing partial or nonresponse. [Boyce et al., 2020]

Which antidepressant to prescribe if a switch is considered?

RCTs have found that switching to an antidepressant from a different class improves response and remission rates when switching for either non-response or intolerability reasons. [Malhi et al., 2021]

Out of Class Switch:

When switching agents, clinicians should consider agents’ half-lives and their unique psychopharmacological properties.

The aim is to avoid or minimise withdrawal symptoms while tapering and avoid drug interactions during switching.

The article below covers ways to minimise withdrawal symptoms and half-lives of SSRIs.

Diagnosis and Management of Antidepressant Withdrawal – Understanding the Hyperbolic Curve and SSRI withdrawal. 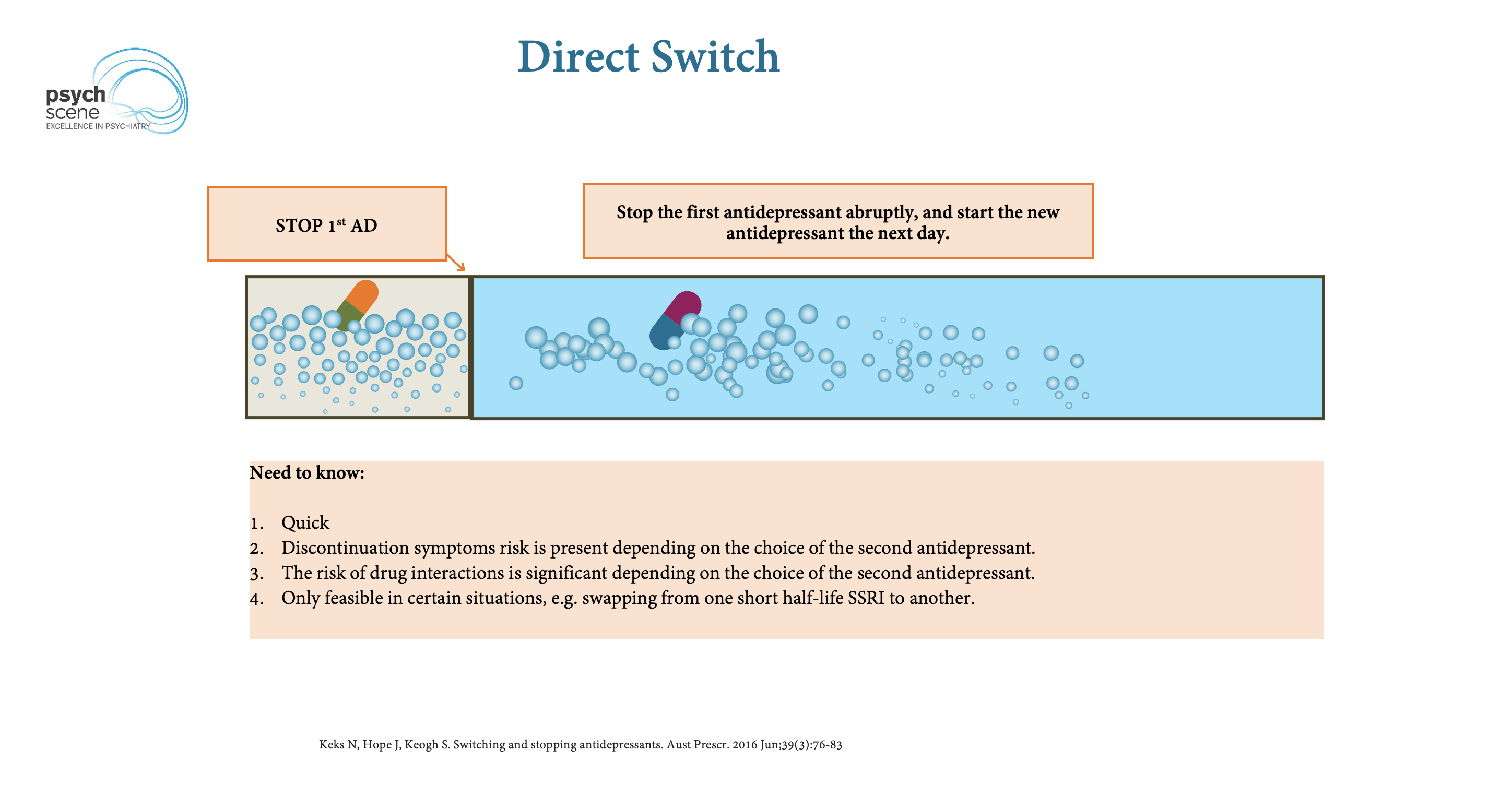 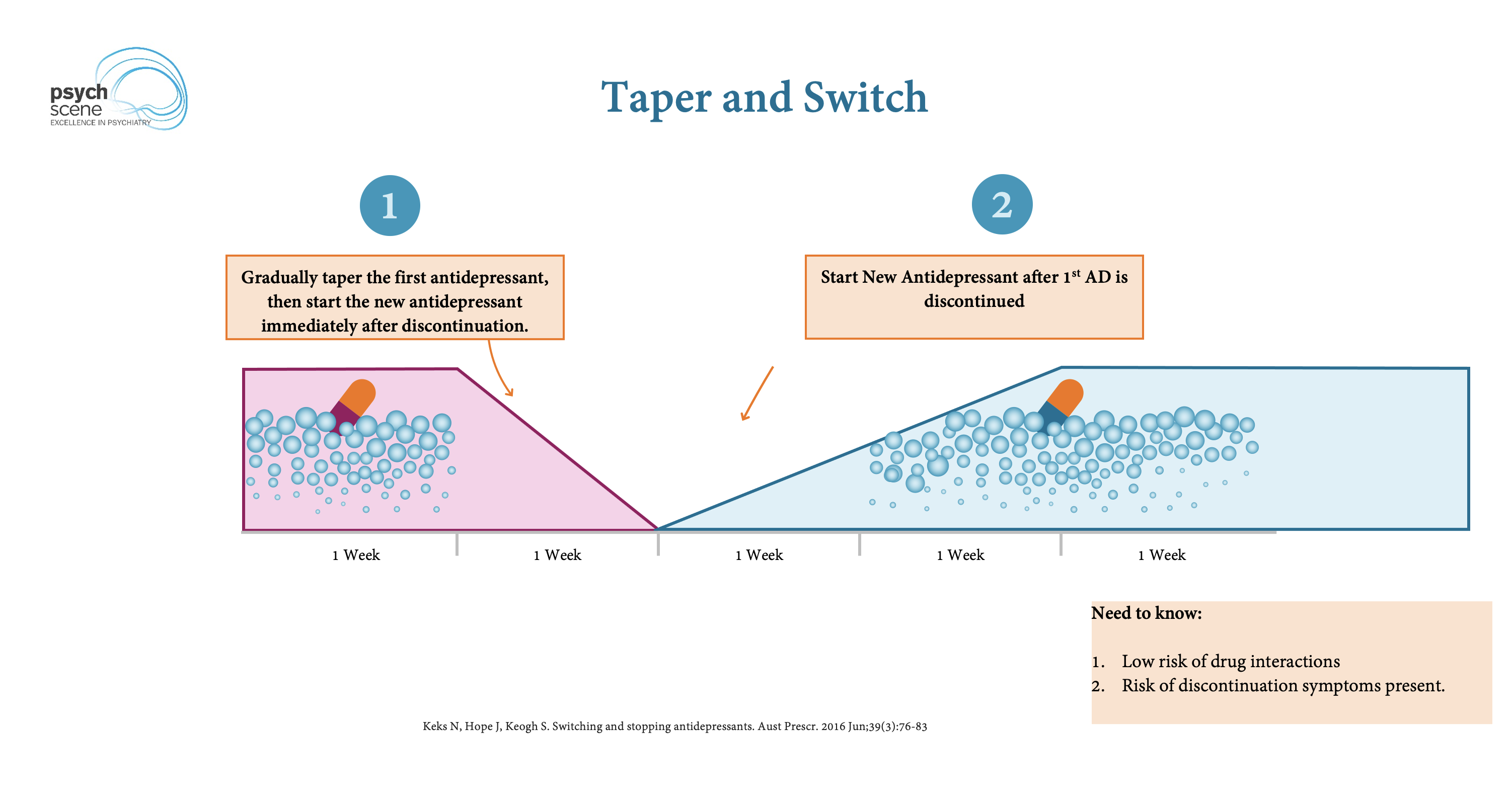 Taper and switch after a washout: 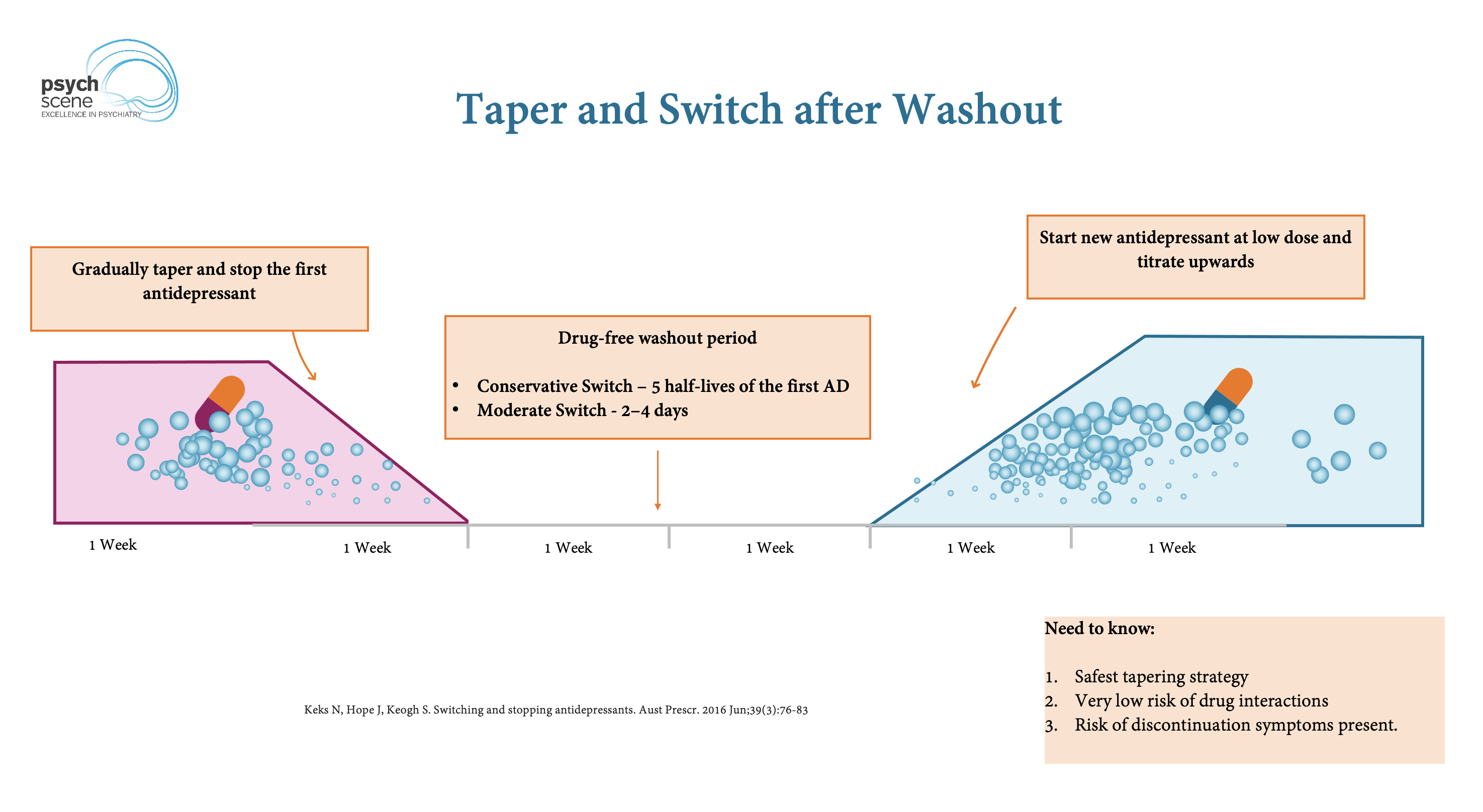 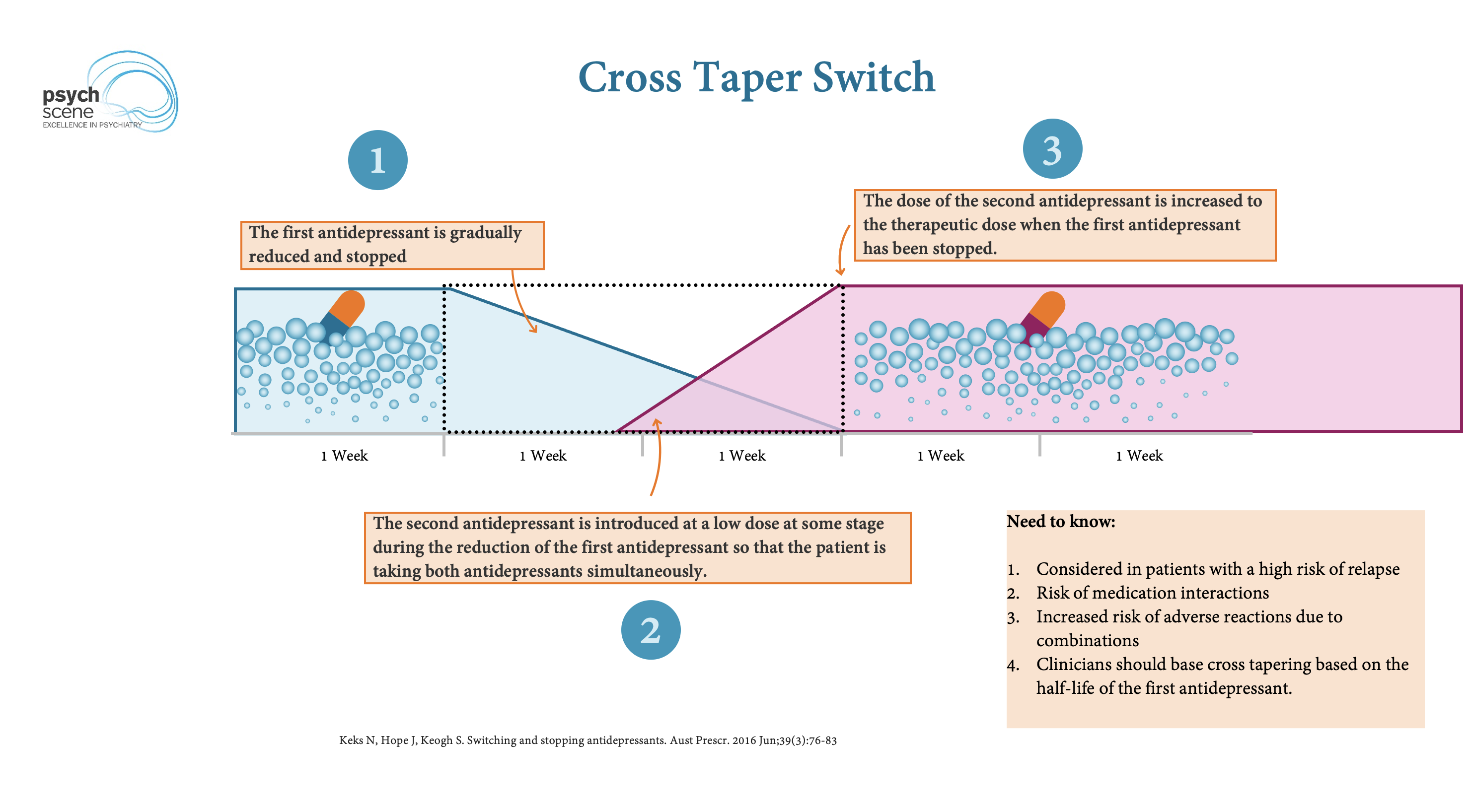 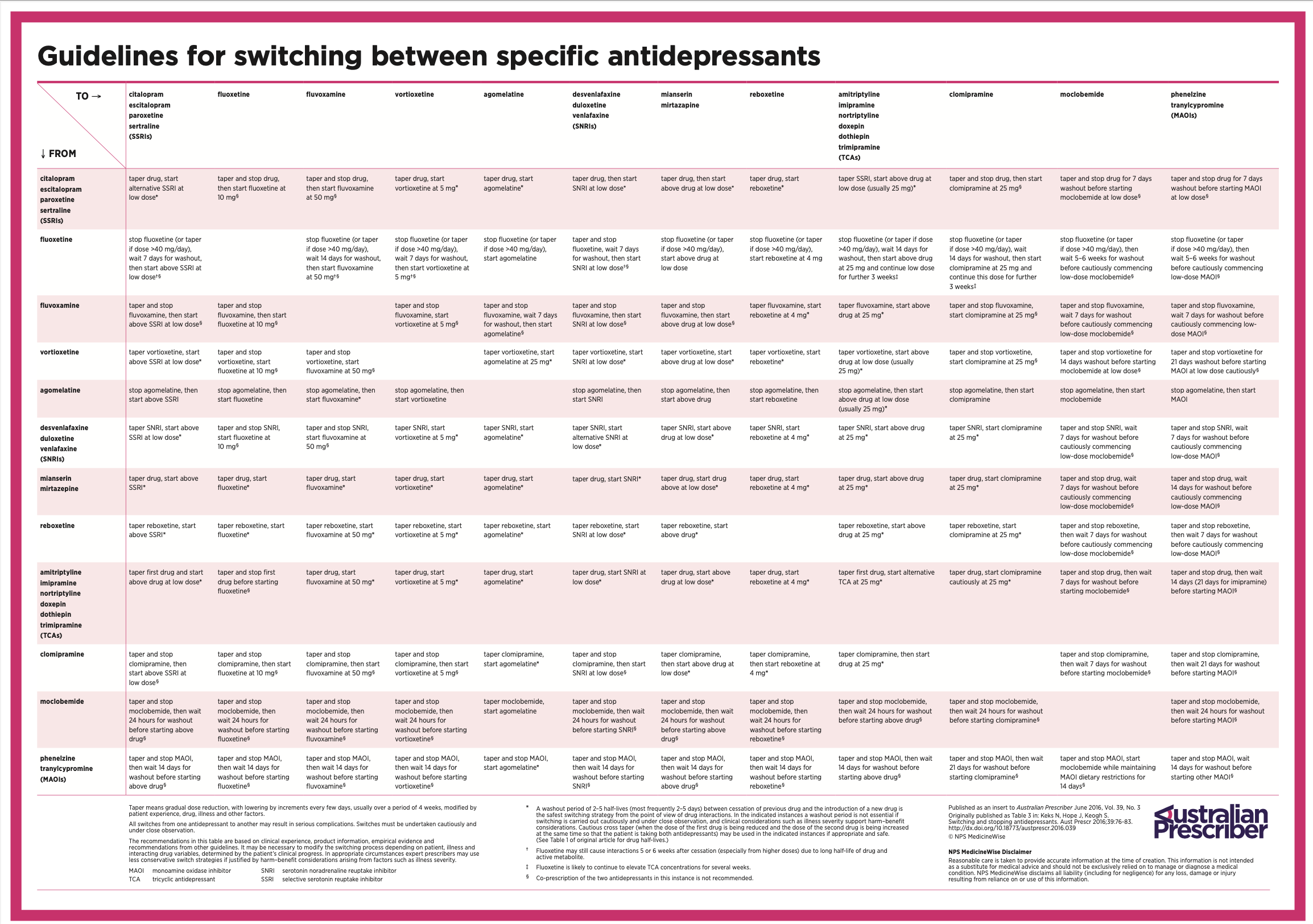 EVIDENCE FOR AUGMENTATION OF ANTIDEPRESSANTS

There are several augmentation options available for clinicians. Newer modalities such as neurostimulation, hormones, and rapid-acting antidepressants (e.g. IN esketamine and ketamine) are all helpful augmentation strategies. Augmentation with psychological therapies and lifestyle modifications should always be a part of the overall treatment of depression. Not all augmentation options have been well studied.

The principle of augmentation is based on the extraction of synergy.

Augmentation should be differentiated from polypharmacy.

The term ‘polypharmacy’ generally carries a negative connotation which is actually more correctly related to the notion of irrational polypharmacy. Less mention is usually made, however, of rational polypharmacy which involves pharmacodynamic synergism and has long been established as good practice in various clinical fields such as oncology, anaesthesia, hypertension, pain management and so on. [Restifo, 2012]

According to the RANZCP Mood Disorder Guidelines: [Malhi et al., 2021]

Which agent to prescribe if an augmentation strategy is considered?

We urge large-scale investigations of understudied agents showing promise, including modafinil, S-adenosyl-L-methionine and cognitive behavioural analysis system of psychotherapy. Finally, we hope that our findings are considered in updating treatment guidelines, particularly in the potential for upgrading (es)ketamine, CBT, mecamylamine and bupropion. [Scott et al., 2022].

The choice of augmentation strategy, thus, should take into account the clinical nature and severity of depression, the etiological factors, tolerability profile, cost and complexity.

Recognising the nature of depression is important, as the presence of psychotic features should prompt augmentation with antipsychotic medication. This might seem intuitive, but according to the STOP-PD study, studies have shown that only 5% of patients with psychotic depression receive a good combination of an antidepressant and an antipsychotic. [Andreescu et al., 2007].

For example, in melancholic depression, adding Bupropion-SR to an SSRI ‘creates’ a broad spectrum agent as Bupropion increases levels of NA and DA in the synaptic cleft via NART and DAT blockade while the SSRI increases synaptic serotonin. This synergy, therefore, can increase therapeutic efficacy where the whole is greater than the sum of its parts.

On the other hand, a combination of SNRI plus SSRI would be contraindicated due to the increased risk of serotonin syndrome.

We have covered a range of augmentation strategies in the article on melancholic and psychotic depression.

The below article also covers a case of augmentation strategy:

Clinicians often perceive the general algorithm for the treatment of MDD to show that monotherapy treatment should be attempted before augmentation in the case of non-response. However, both switching and augmentation may be viable strategies after an initial non-response to medication. Based on the evidence, there are a number of pharmacological options and CBT that clinicians can choose as augmentation strategies. In this article, we focus on pharmacological options predominantly. rTMS and ECT are other treatment options for clinicians to consider.

Firstly, it is essential to recognise that response to any initial treatment should be evaluated early (1-2 weeks) rather than late, as a late response is associated with chronicity.

Secondly, proactive strategies to treat partial or non-response should be implemented early (within 2-4 weeks) rather than after, as early responders are three times more likely to become sustained responders. Hence clinicians should consider dose increase, switching or augmentation early in treatment.

Both switching and augmentation strategies show evidence, and the decision to switch or augment should be an individualised, shared decision-making process.

The decision should consider the symptom severity, the patient’s disability, and the cost and complexity of treatment choice.

STAR*D: What Have We Learned?

A New Paradigm for Achieving a Rapid Antidepressant Response

Optimal use of antidepressants: When to act?

Is There a Common Resilience Mechanism Underlying Antidepressant Drug Response? Evidence From 2848 Patients

Switching antidepressants in the treatment of major depression: When, how and what to switch to?

Switching the antidepressant after nonresponse in adults with major depression: A systematic literature search and meta-analysis.

A randomised, double-blind study in adults with major depressive disorder with an inadequate response to a single course of selective serotonin reuptake inhibitor or serotonin–noradrenaline reuptake inhibitor treatment switched to vortioxetine or agomelatine

Walking on thin ice: the use of triple antidepressant combinations in refractory melancholic depression

Thyroid hormone treatment in the management of treatment-resistant unipolar depression: a systematic review and meta-analysis

Treatment-resistant depressive disorders: The when, how and what of augmentation therapy

Minocycline as an adjunct for treatment-resistant depressive symptoms: A pilot randomised placebo-controlled trial

Guidelines for the evaluation and treatment of perimenopausal depression: summary and recommendations

Augmenting Vs. Switching Antidepressant for Treatment Resistant Depression in Older adults: Results from the Optimum Study.

Persisting low use of antipsychotics in the treatment of major depressive disorder with psychotic features.