How Stress Increases the Risk of Cardiovascular Disease (CVD)

Stress is a physiological response to a stressor that threatens an individual’s internal physiological state or psychological wellbeing. Life is critically dependent on the control of the body’s internal state even when the external environment is constantly changing. This is called homeostasis and when it is threatened, the body undergoes a stress response.

Research shows that acute psychological stress can elicit a cardiovascular response with concomitant increases in heart rate and blood pressure.

Epidemiological observations have demonstrated that due to the unpredictable nature of an acute stressor, it can significantly alter cardiac rhythm in susceptible individuals to such an extent so as to trigger an acute coronary event. Many of these studies also report an emotional episode approximately two hours prior to cardiac arrest.

Chronic stress is often the result of an acute stress response becoming maladaptive due to the continuous or prolonged nature of the stressor.

Experimental studies show that chronic stress is associated with sustained increases in blood pressure and vascular hypertrophy. There is also an increased risk of developing atherosclerosis with chronic stress resulting in cardiac instability and increased sensitivity to myocardial ischemic injury.

The physiological cardiovascular response to stress involves a cascade of downstream consequences that integrate neuronal and endocrine information in the brain and the periphery.

Stress-associated cardiovascular disease (CVD) begins with activation of both the sympathetic nervous system and the hypothalamus-pituitary-adrenal (HPA) axis causing an increase in the secretion of catecholamines, glucocorticoids and inflammatory cytokines.

These conditions facilitate increases in heart rate and blood pressure that will eventually contribute to endothelial dysfunction. The impact of stress may begin in utero through the mechanisms invoked by maternal stress.

Furthermore, research in animal models suggest that psychological stress mobilises the immune system with increased activity of haemopoietic progenitor cells in the bone marrow. The bone marrow derived monocytes that are released in response to stress have been shown to migrate to the arterial wall and cause atherosclerotic inflammation.

However, it is unknown whether these processes occur in humans and whether it is the brain stress-network that begins this pathogenic process.

A newly published study in The Lancet would appear to suggest that the amygdala—an almond shaped part of the brain situated in the temporal lobe that is involved in stress and has been previously implicated with post-traumatic stress disorder (PTSD), anxiety and depression—has heightened activity that leads to a greater risk of developing CVD. 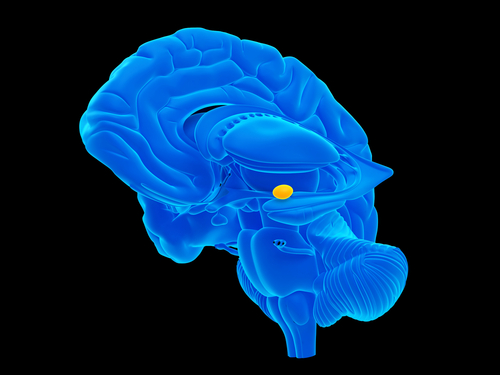 Amygdala- Almond shaped structure situated in the temporal lobe involved closely in the processing of emotions.

Two complementary studies of 293 patients that were over 30 years old and with no history of cancer, CVD or metabolic disorder, were given a combined PET/CT scan to record amygdala activity, bone marrow and spleen activity, and arterial inflammation. Then approximately 3.7 years later they were again analysed to determine whether they had developed CVD.

Together, these two studies would help to show that increased emotional stress is associated with an increased risk of CVD.

The initial recordings of amygdalar metabolic activity accurately predicted the risk of developing a subsequent cardiovascular event, even after multivariate adjustments for other risk factors.

The amygdalar activity also correlated well with haemopoietic activity in the bone marrow and that this activity then mediated arterial inflammation.

In the cross-sectional sub-study, patients who reported the highest levels of stress at the beginning of the study also had higher amygdalar activity as well as higher levels of C-reactive protein (a biomarker of inflammation).

These individuals were also shown to have a greater presence of inflammation in the walls of their arteries compared to those with lower levels of perceived stress. 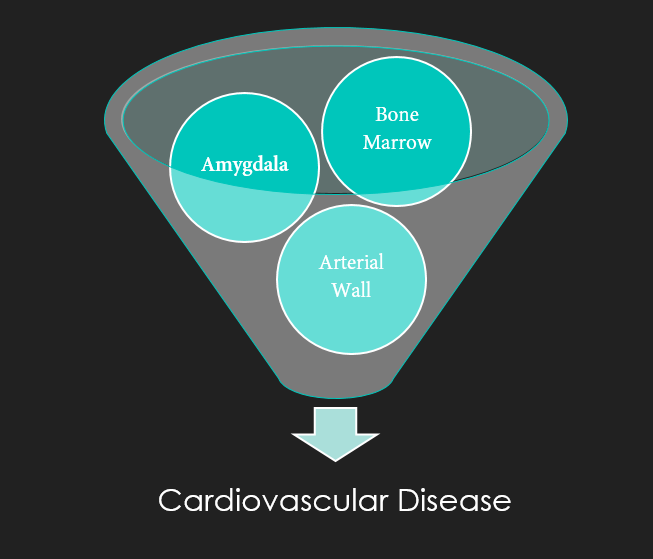 This study describes novel observations of a biological mechanism that defines a link between psychological stress and cardiovascular risk.

The researchers suggest that this mechanism involves resting amygdalar activity, bone marrow, and arterial inflammation, which together form a biological axis that hastens CVD.

The researchers then suggest that by managing and reducing psychosocial stress this will benefit not only a better psychological wellbeing but also reduce CVD risk. 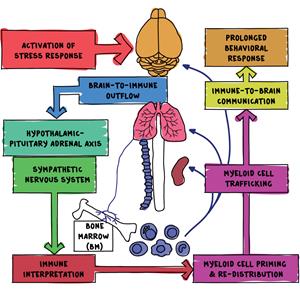 Monocyte trafficking to the brain with stress and inflammation: a novel axis of immune-to-brain communication that influences mood and behavior. (Wohleb et al., 2014)

Cardiovascular disease is one of the most important health issues of the 21st century and is a leading cause of mortality worldwide.

The most common form of CVD is coronary heart disease, which includes myocardial infarction, angina and sudden cardiac death.

Psychological and psychiatric factors, in particular, have an important role in the aetiology, development and outcome of cardiovascular disease.

Previous studies have shown that depression, anxiety and PTSD can result in an increased risk of developing cardiovascular disease.

A recent meta-analysis examining the relationship between PTSD and coronary artery disease (CAD) showed a 46% increased risk of  CAD after adjusting for depression.

However, this relationship is bidirectional with significant evidence that there is a high prevalence of mental health disorders in patients with a history of cardiovascular events.

This unique relationship, in turn, leads to worse outcomes in CVD, independent of other CVD risk factors such as obesity or hypertension.

Psychosocial interventions such as cognitive-behavioral stress management can improve stress-coping skills, quality of life and decrease negative moods with favourable influences on morbidity, mortality and markers of CVD progression.

This study shows a relationship between stress, the increased activity of the major emotional stress networks in the brain, and a greater risk of developing cardiovascular disease.

Want to learn more? Check out the article on what cardiologists and psychiatrists should know about the relationship between depression and cardiovascular disease.

Depression and exhaustion as a risk factor for cardiovascular disease.

Loading How Stress Increases the Risk of Cardiovascular Disease (CVD)

Tawakol A, et al., Relation between resting amygdalar activity and cardiovascular events: a longitudinal and cohort study. The Lancet. 2017