Social Networking Addiction – Is Excessive Use of the Internet and Social Media a Behavioural Addiction?

Accessing the internet in locations other than at home or work has increased society’s connectivity. For many, the benefits outweigh the risks; however, as many as one-third of online users would like to reduce their time online or feel the need to go on a so-called ‘digital sabbatical’. [Ofcom, 2018]

So, is excessive use of the internet and social media a behavioural addiction? Symptoms of social media addiction have been reported to be similar to substance abuse disorders, i.e. social anxiety, depression and the exhibition of withdrawal symptoms. [Banyai et al., 2017]

Problematic social media use can have adverse outcomes on academic and work performance as well as interpersonal relationships.

We previously covered the similarity between substance addiction and internet addiction.

Social or Antisocial Media? The Silence Before the Storm

Social media or SNS addiction is not listed in the Diagnostic and Statistical Manual of Mental Disorders, 5th edition, (DSM-V) or the International Classification of Diseases, 11th edition. Therefore, caution is advised as substantial evidence is not currently available. The absence of established definitions also hampers guidance to diagnosis and management strategies.

To further complicate these definitions, Facebook has grown to be more than just an SNS with a range of social media activities now available.

Therefore, for this article, we will refer to SNS addiction as the definitional parameter of social networking but with the caveat that labelling it as an addiction encompasses compulsion and problematic use.

Engagement in excessive social networking has been suggested to be mediated by the fear of missing out (FOMO), smartphone addiction, and nomophobia (irrational fear of being without your mobile phone). [Bragazzi and Del Puente 2014]; [Oberst et al, 2017]

These specific constructs may help explain the link between SNS addiction and its psychopathological consequences; however, the causal relationship between these constructs and an established theoretical model requires further study.

From a clinical perspective, SNS addiction had been suggested to be based on either a social skill model, a cognitive-behavioural model, or a socio-cognitive model [Turel and Serenko, 2012]:

Neurobiology of SNS Use Disorder: 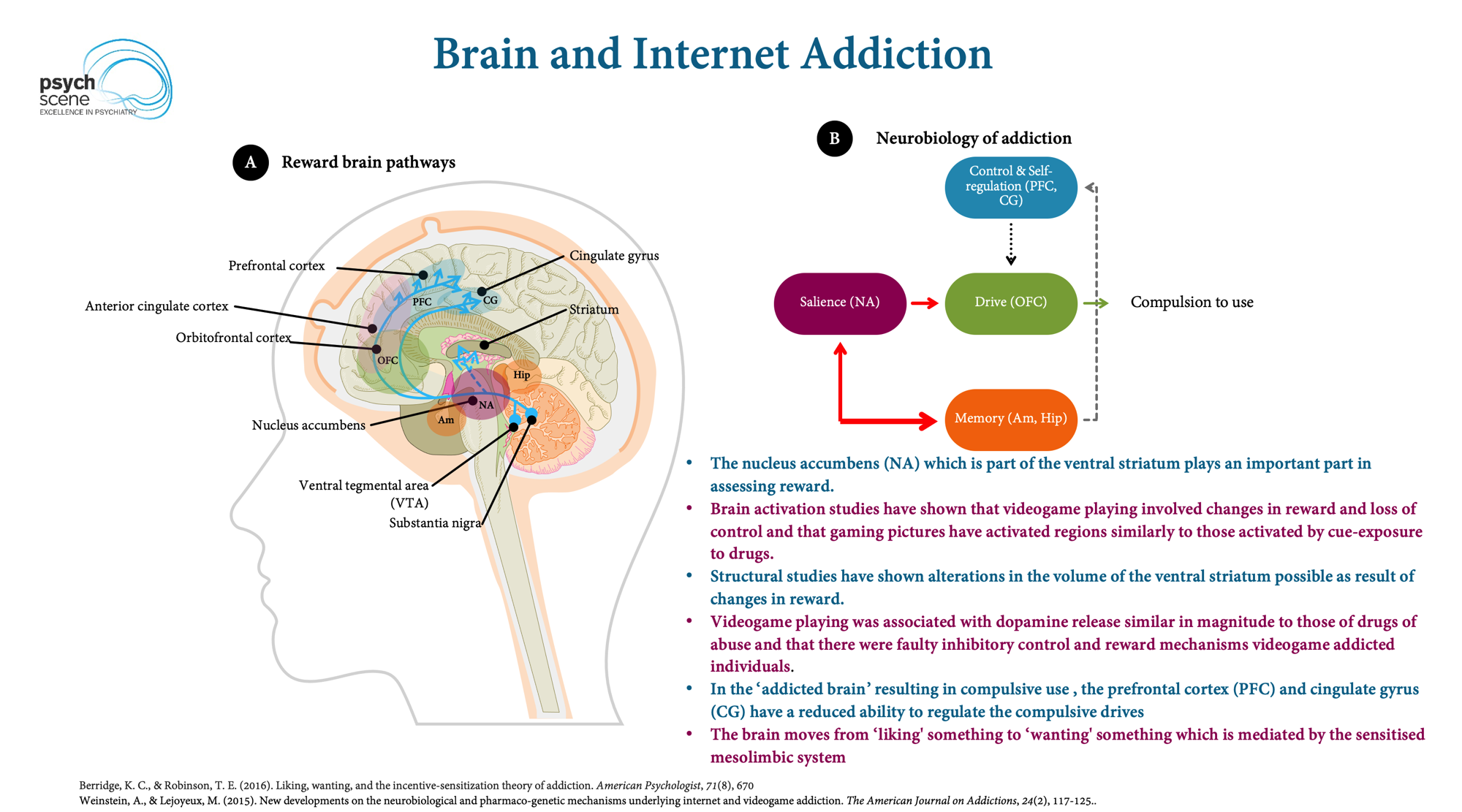 Adolescents are especially vulnerable due to an extended prefrontal cortex development time compared to that of the limbic system results in weakened inhibition from the side of the cortical regions toward underlying subcortical structures, resulting in more prominent impulsivity, which contributes to high-risk behaviour.  [Tereshchenko & Kasparov, 2019]

There has been a substantial amount of research on addiction to Facebook specifically, which in the literature has been termed by some as Facebook Addiction Disorder (FAD). [Brailovskaia and Margraf, 2017]

Although there are other SNS addictions– particularly with photo sharing through Instagram – this emerging behavioural addiction is accurately defined by the typical characteristics of the biopsychosocial model. [Andreassen et al., 2012]; [Koc and Gulyagci, 2013]

The Bergen Facebook Addiction Scale (BFAS) is a relatively new psychometric tool that encompasses the biopsychosocial model and can investigate human behaviour associated with Facebook use. [Andreassen et al., 2012]

The scale covers six questions, and participants are to answer either (1) very rarely, (2) rarely, (3) sometimes, (4) often, and (5) very often. If a participant were to score often or very often on four out of the following six questions, then this would suggest that they are addicted to Facebook:

However, this scale is limited by its subjective self-reporting nature. For instance, a similar internet addiction questionnaire has been suggested to report a false positive up to 91% of the time. [Maraz et al., 2015]

Plus, given the multi-faceted nature of addictive behaviours, it seems unlikely that a simple description of its symptoms could recognise and conceptualise the dysfunctional nuances that cause the psychological distress of addiction. [Billieux et al., 2015]

Therefore, to improve accuracy and reproducibility, it has been recently proposed that a multidisciplinary team of academic clinicians and industrial partners need to work together on large-scale longitudinal studies. Of note, partners such as Facebook are being urged to share their increasingly large datasets through the Social Data Science Accelerator. [Przbylski, 2018]

Social networking online is a highly prevalent activity that can have adverse mental health outcomes associated with addiction.

Based on currently available empirical evidence, excessive use of SNS suggests a link to symptoms that are characteristic of a substance use disorder.

However, in the absence of a DSM-V classification, more research is warranted to determine the compulsive traits, the types of activities, and the treatment interventions that may be effective.

Adults’ Media Use and Attitudes Report

A proposal for including nomophobia in the new DSM-V

Negative consequences from heavy social networking in adolescents: The mediating role of fear of missing out

Oberst U et al., Negative consequences from heavy social networking in adolescents: The mediating role of fear of missing out. J Adolescence. 2017;55:51-60.

The benefits and dangers of enjoyment with social networking websites

Neurobiological risk factors for the development of internet addiction in adolescents.

A ‘components’ model of addiction within a biopsychosocial framework

The diagnostic pitfalls of surveys: If you score positive on a test of addiction, you still have a good chance not to be addicted

Maráz A et al., The diagnostic pitfalls of surveys: if you score positive on a test of addiction, you still have a good chance not to be addicted. A response to Billieux et al. J Behav Addict 2015.

Are we overpathologizing everyday life? A tenable blueprint for behavioral addiction research

Przybylski A. Written evidence presented to the Commons Science and Technology Committee. 2018.

Rate this psychinsights
Number of Views: 11,161