Sexual dysfunction is a persistent change occurring in any of the stages of the sexual response cycle that causes distress to the patient.

There are 4 stages of the sexual response cycle:

Sexual dysfunction (SD) is a known side-effect with certain antidepressants and is also associated with depression. Differentiating the two may be challenging in clinical practice.

The severity of depression is correlated with the severity of sexual dysfunction. In men, the presence of SD is determined by the severity and, to a certain extent, type of their depression, with atypical depression having a lower rate of SD compared to patients with major depressive disorder (MDD). [Fabre et al., 2013]

In the general population, the prevalence of SD is approximately 43% in women and 31% in males. This prevalence increases to approximately 60-80% in anxiety, mood, or psychotic disorders. [Taylor et al., 2021]

MECHANISMS OF SEXUAL DYSFUNCTION WITH ANTIDEPRESSANTS

When patients are actively asked about sexual side effects, this prevalence increases significantly. [Higgins et al., 2010]

2. History of Past sexual dysfunction 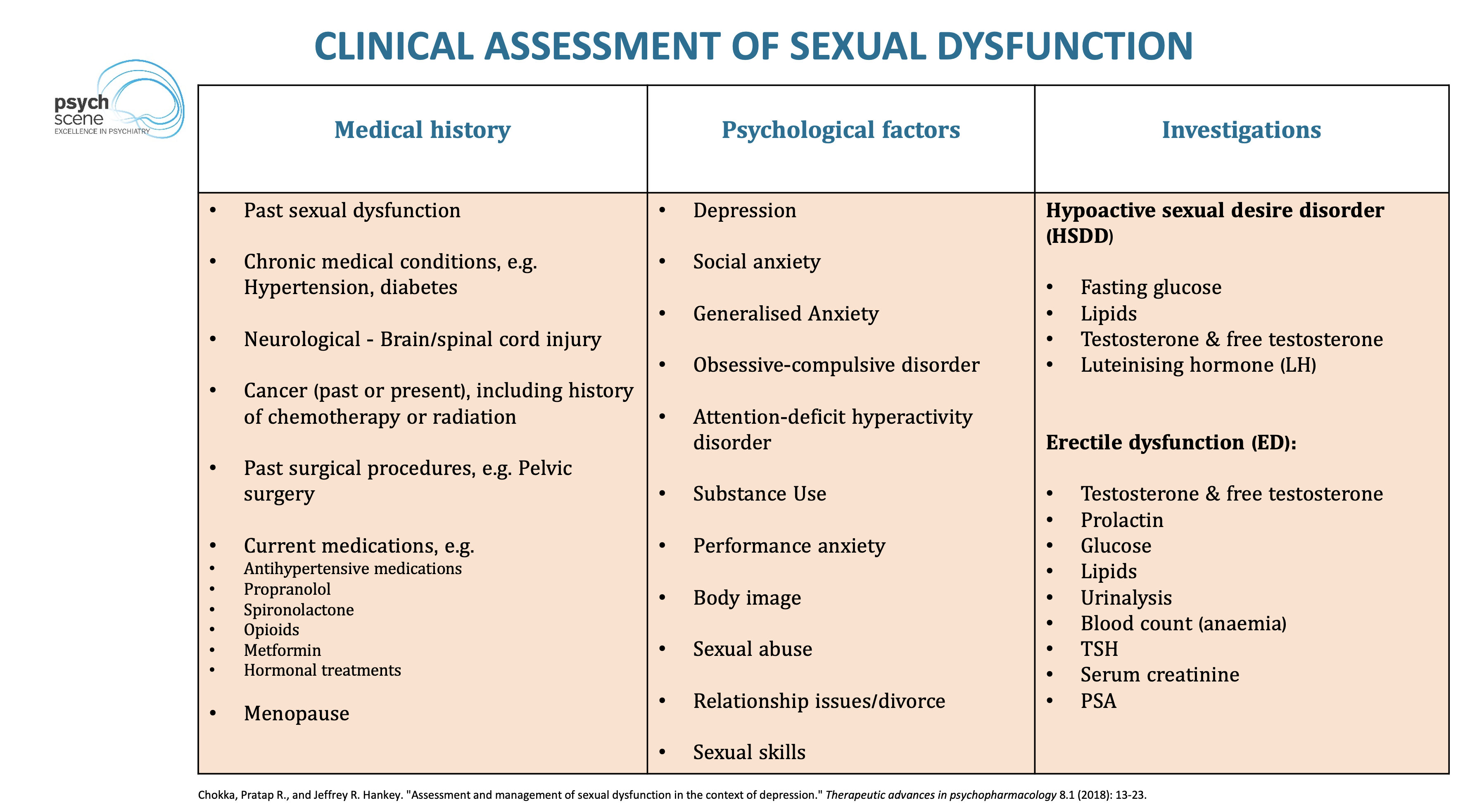 Important points in the assessment include:

2. Commence medication with a low incidence of sexual dysfunction

Following are antidepressants having no significant effect on sexual functioning :

Some patients experience partial or total improvement of their treatment-emergent sexual dysfunction in a few weeks to months.

Halving the dose of an antidepressant improved treatment-emergent sexual dysfunction in 75% of cases with total recovery. [Nurnberg & Levine, 1987]

Dose reduction, however, can be associated with relapse of depression, and hence close monitoring is essential.

Dosage reduction in association with other non-serotoninergic ADs (e.g., agomelatine, bupropion, or mirtazapine) could potentially be useful.

Antioxidant pathways and others:

Bupropion: [Read about the mechanism of action]

Agomelatine: [Read more on the mechanism of action]

Mirtazapine: [View video on the mechanism of action]

Vortioxetine: [Read about the mechanism of action] 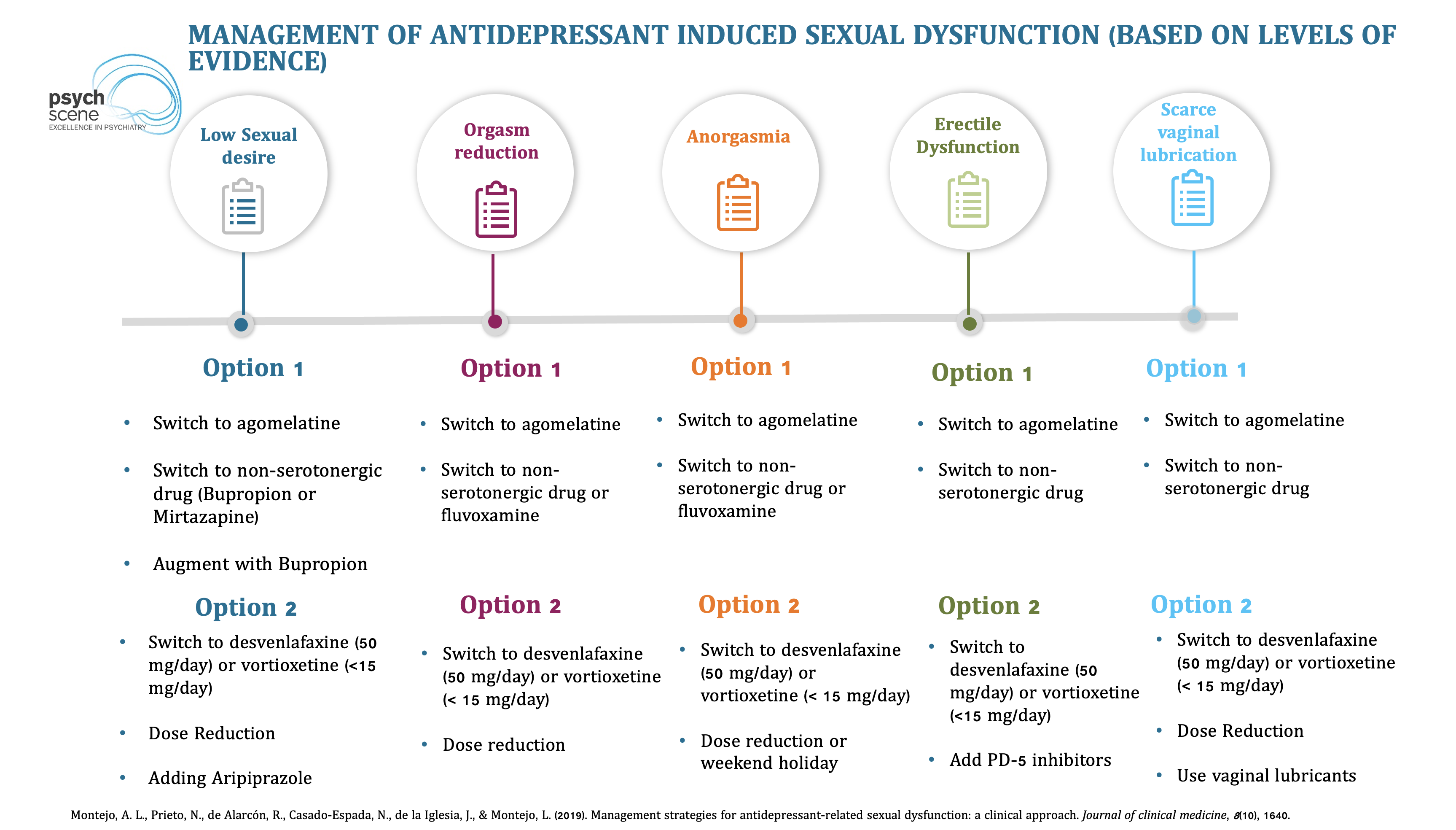 Antidepressant induced sexual dysfunction is often underestimated. SSRIs and SNRIs are associated with SD and can affect all phases of the sexual response cycle due to their effect on serotonin receptors, dopamine, cholinergic and noradrenergic systems.

Clinicians should proactively ask about sexual dysfunction in patients started on ADs and include this side effect as part of shared decision making when choosing ADs.

Agomelatine, Bupropion and Mirtazapine have a lower incidence of SD.

Below is a summary algorithm in managing sexual dysfunction. 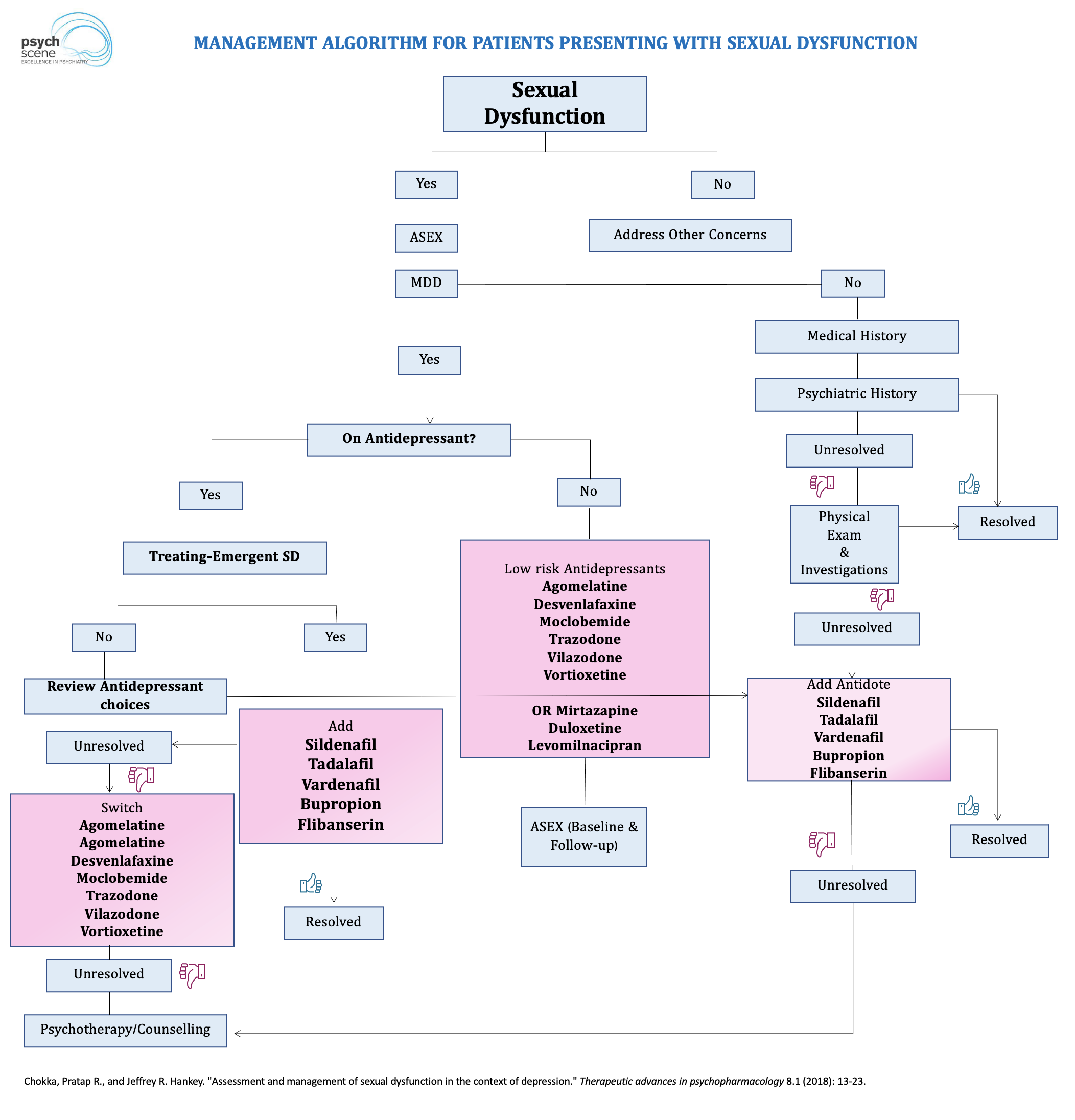 Assessment and management of sexual dysfunction in the context of depression.

Association of Major Depression With Sexual Dysfunction in Men

The Maudsley prescribing guidelines in psychiatry

Effect of antidepressant medications on semen parameters and male fertility

A Double-Blind Comparison of Sexual Functioning, Antidepressant Efficacy, and Tolerability Between Agomelatine and Venlafaxine XR

Clinical implications of directly switching antidepressants in well-treated depressed patients with treatment-emergent sexual dysfunction: a comparison between vortioxetine and escitalopram