Psychotropic drugs are known to be associated with a prolonged QTc interval with differing risk profiles. As psychotropic drugs prolong cardiac repolarization, they increase the risk of Torsades de Pointes (TdP).

Heart rate corrected QT interval (QTc) on the ECG is the most widely used and accepted marker to screen for the risk of Torsades de Pointes.

The QT interval is defined as the distance from the beginning of the  QRS complex to the end of the T wave. 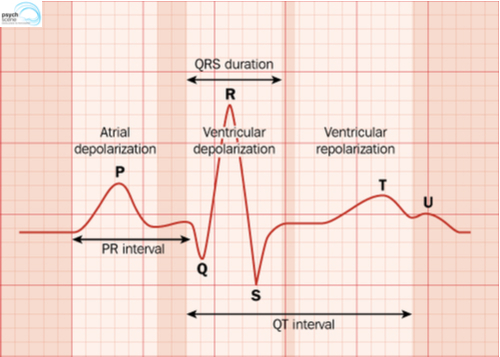 When using Bazett’s or Fridericia’s formulae to correct for heart rate, the RR interval from the preceding cycle length is used.

There are two main methods for calculating QTc. 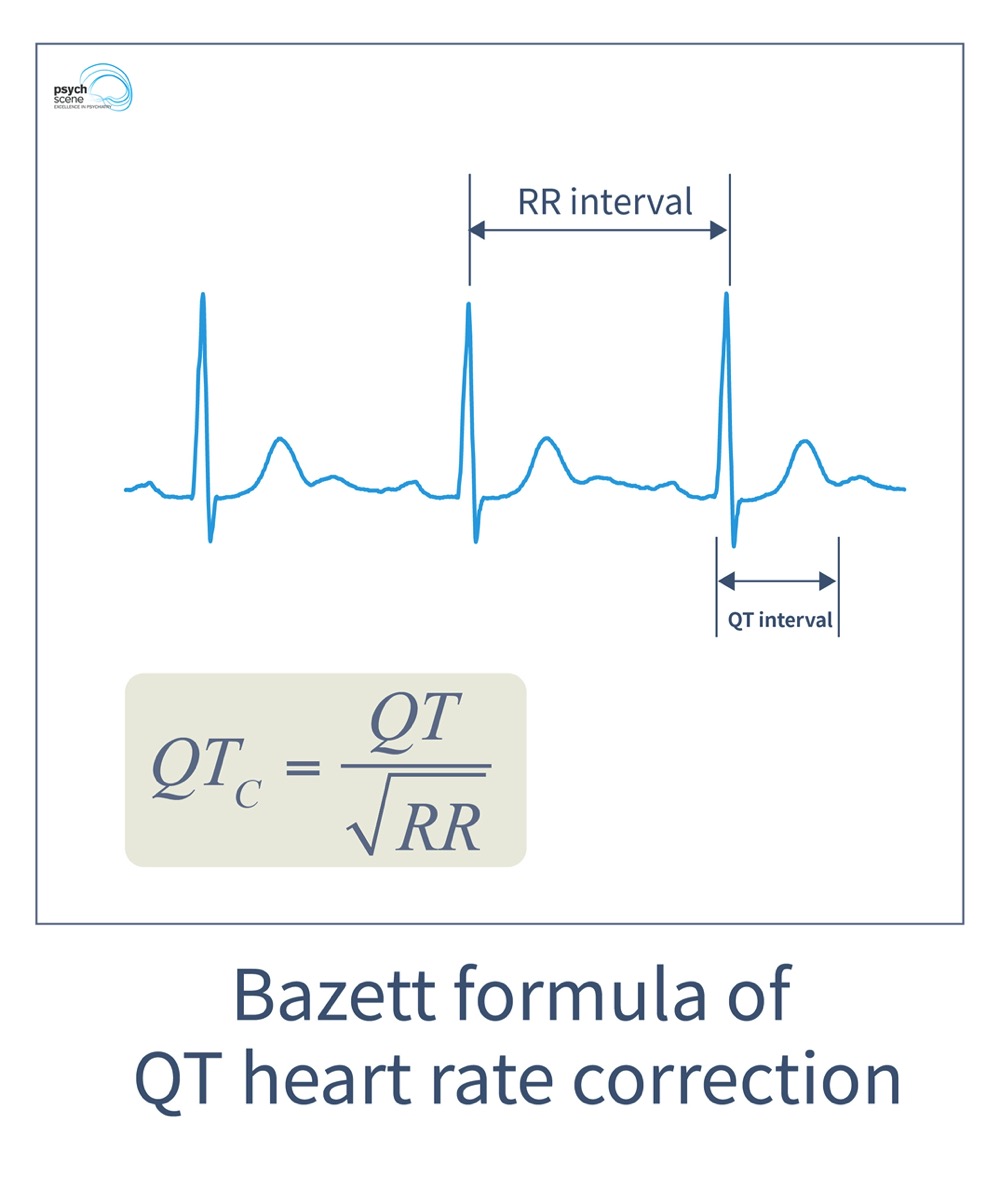 There are other less used methods such as Hodges and Framingham, which are used less frequently.

The QT interval is a measure of the combination of cardiac depolarisation and repolarisation. [Postema P & Wilde A, 2014]

Resting potential is maintained by the sodium-potassium pump. 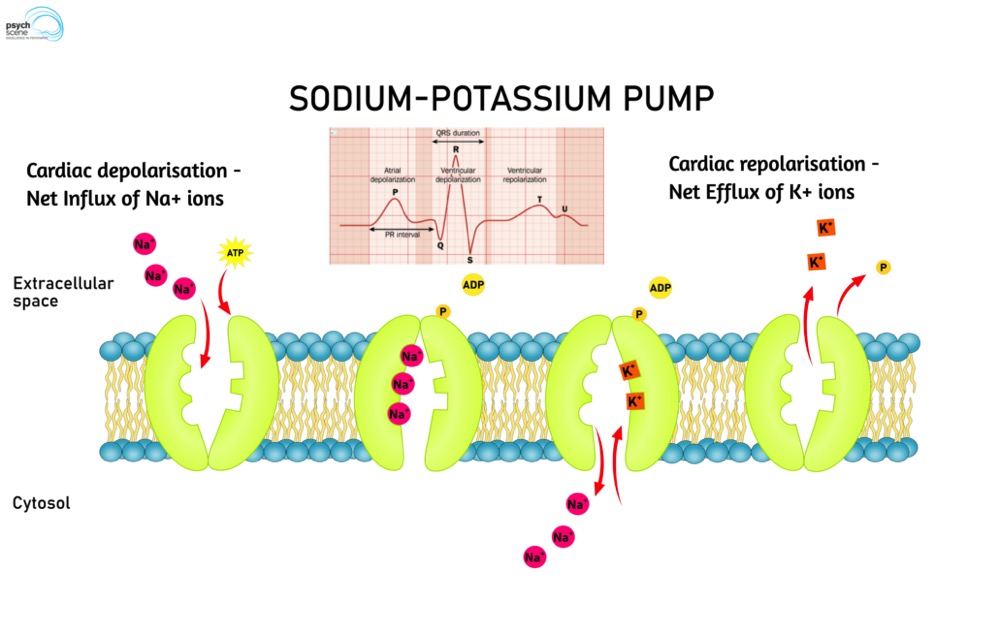 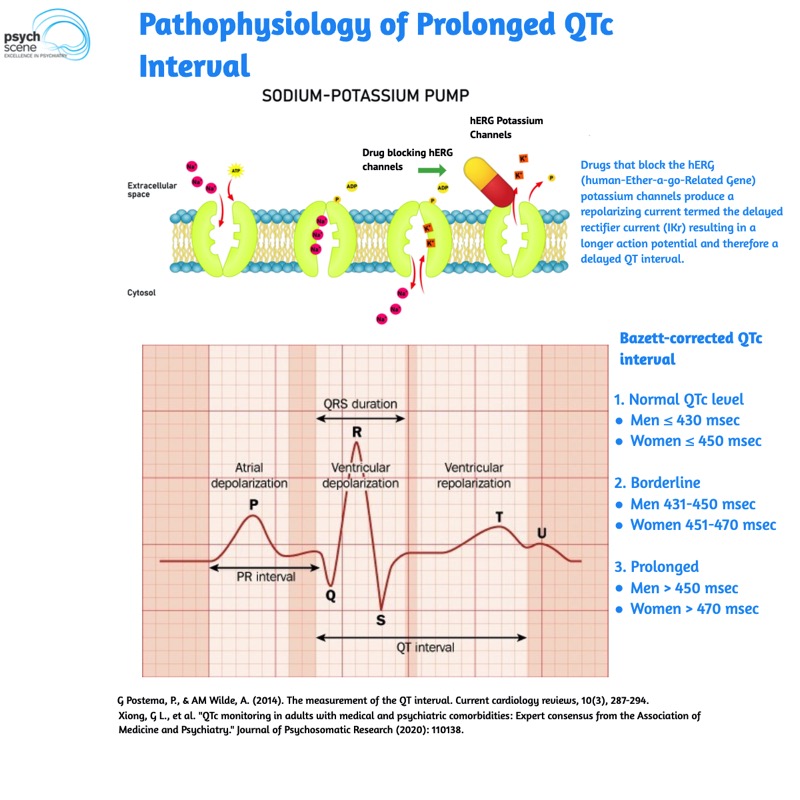 A QTc greater than 500 msec is associated with a twofold to a threefold higher risk for TdP, and each 10-msec increase contributes to approximately a 5% to 7% exponential increase in risk. [Li M & Ramos L, 2017]

Torsades de Pointes (twisting of points) is a rare form of polymorphic ventricular tachycardia characterised by twisting of QRS complexes along the isoelectric line.

Torsades de Pointes may progress to a fatal ventricular arrhythmia. 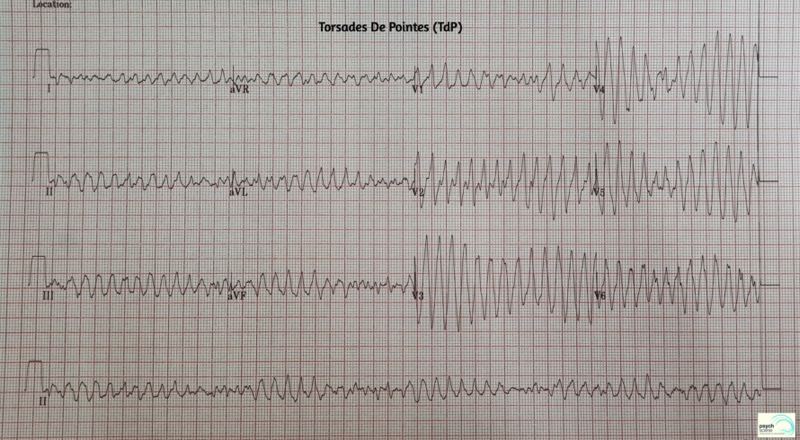 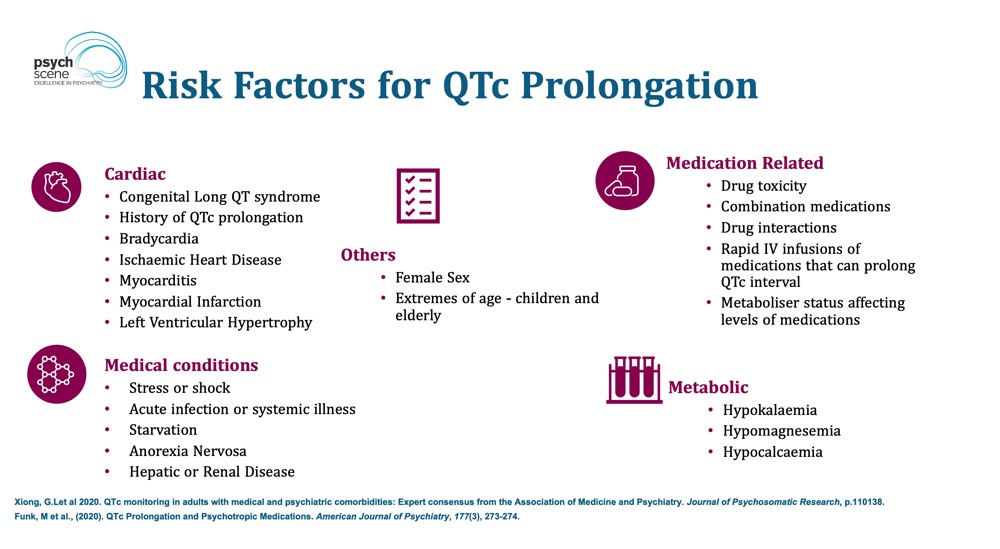 Both typical and atypical psychotic medications have been associated with QTc interval prolongation and sudden cardiac death.

As many as 75% of TdP cases occur at therapeutic doses of antipsychotic medications.

Amongst Second-generation antipsychotics (SGAs), Ziprasidone has the highest risk with a potential to add 15.9 ms to the baseline QTc interval. 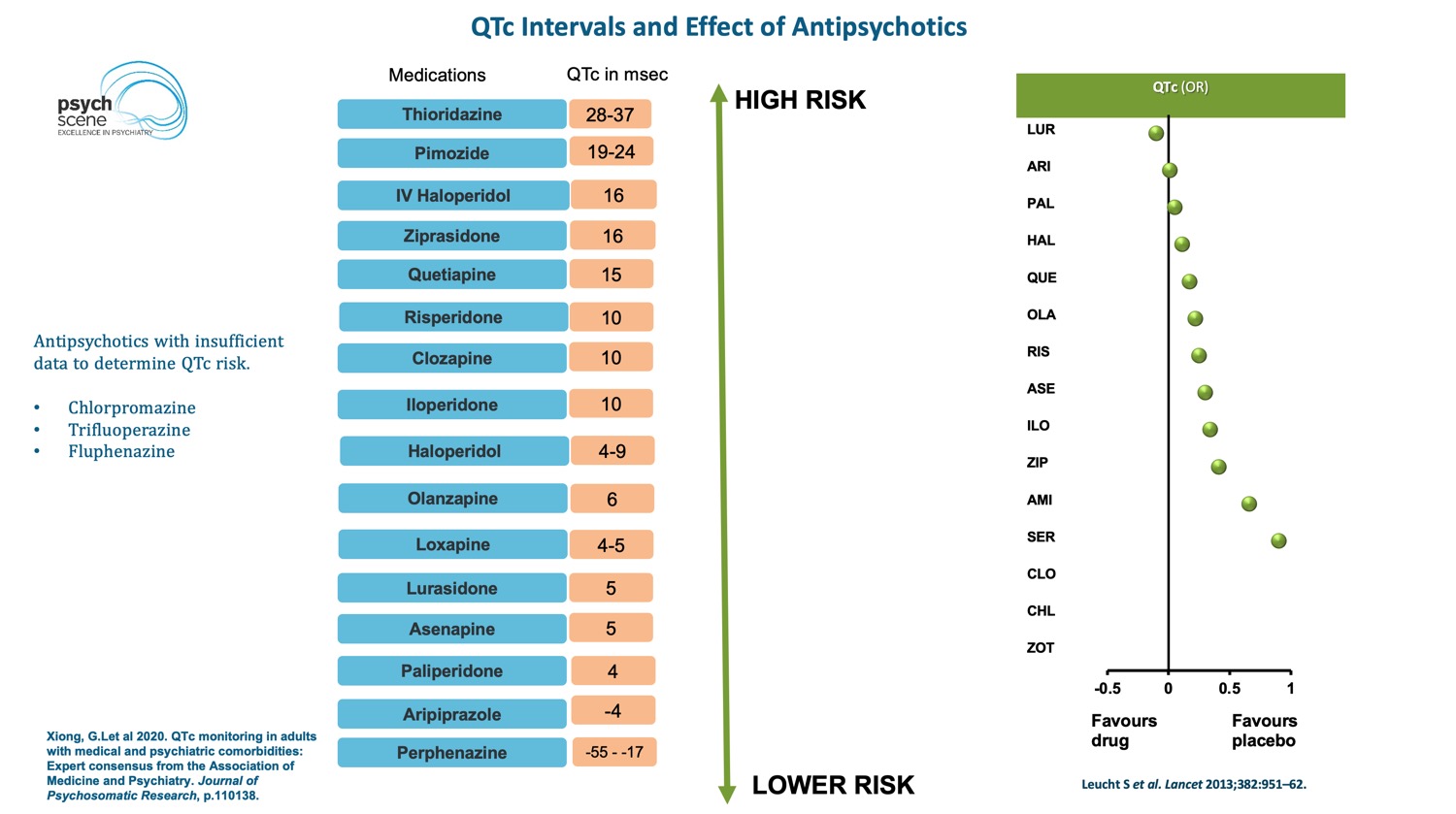 The U.S. FDA accordingly recommends placing any patient prescribed intravenous haloperidol on a cardiac monitor given the high risk of QTc prolongation (16 msec).

A systematic review of studies evaluating droperidol’s effect on QTc demonstrated that droperidol is associated with about the same risk of QTc prolongation as other anti-agitation medications at intramuscular or intravenous doses of up to 10 mg.[Perkins J et al., 2015]

Cardiac monitoring is essential in the setting of intravenous haloperidol use.

In August 2011, the FDA issued a warning for QTc prolongation with Citalopram.

The evidence to date suggests that citalopram (which increases QTc by about 10–20 msec) and escitalopram (which increases QTc by about 5–11 msec) carry the highest risk of QTc prolongation among second-generation antidepressants (e.g., selective serotonin reuptake inhibitors, selective norepinephrine reuptake inhibitors), while most other antidepressants have negligible effects on QTc. [Xiong G et al., 2020]

When applying these results to real-life clinical practice, it is essential to consider that QTc interval changes in the range of 10-20ms, as found in the citalopram studies, are below the limits of detection on an individual ECG and may only yield a signal in large samples. QTc interval changes in the range of 30- 60ms would be considered potential signals; changes >60ms should be considered unusual and signals of concern. Hence, though the QTc interval changes with citalopram separate out from the other SSRIs, the clinical impact in isolation of other risk factors is insignificant.

It is also important to keep in mind that, for some patients, the risk of QTc interval prolongation with 60mg of citalopram is not as significant as the risk of psychiatric decompensation with a lower dose. There is evidence to suggest that the FDA warning has not reduced all-cause or cardiac mortality, but has led to increased rates of psychiatric hospitalizations for patients whose dose was reduced reflexively. Another study found that patients who had their dose of citalopram reflexively reduced were more likely to be prescribed sedatives or anxiolytics and had higher healthcare utilization. These studies highlight the importance of comprehensively considering all factors contributing to the risk-benefit ratio when prescribing “at-risk” medications. [Funk M et al., 2020] 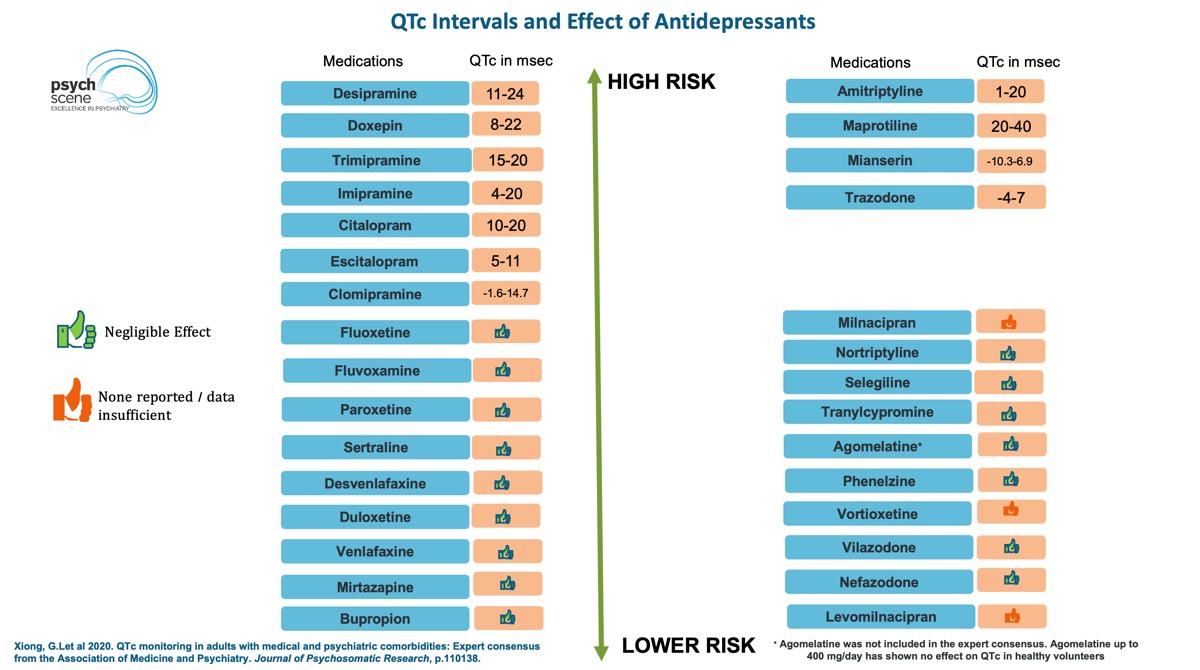 OTHER PSYCHOTROPICS and QTc INTERVAL

Stimulants and other agents used in ADHD:

Several other non-psychotropic medications can prolong the QT interval. 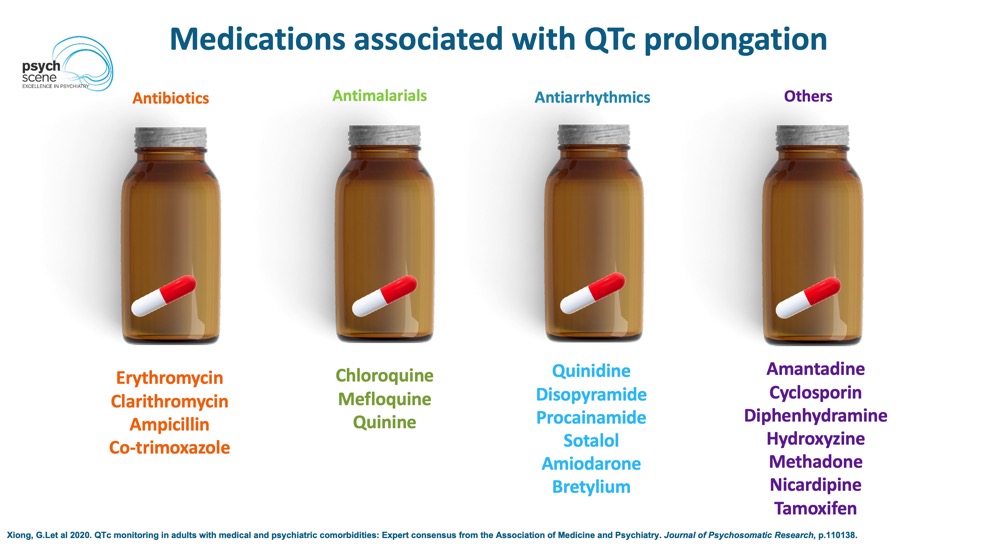 As patients with psychiatric disorders can have other medical comorbidities, clinicians should be aware of the risks of combined treatment. 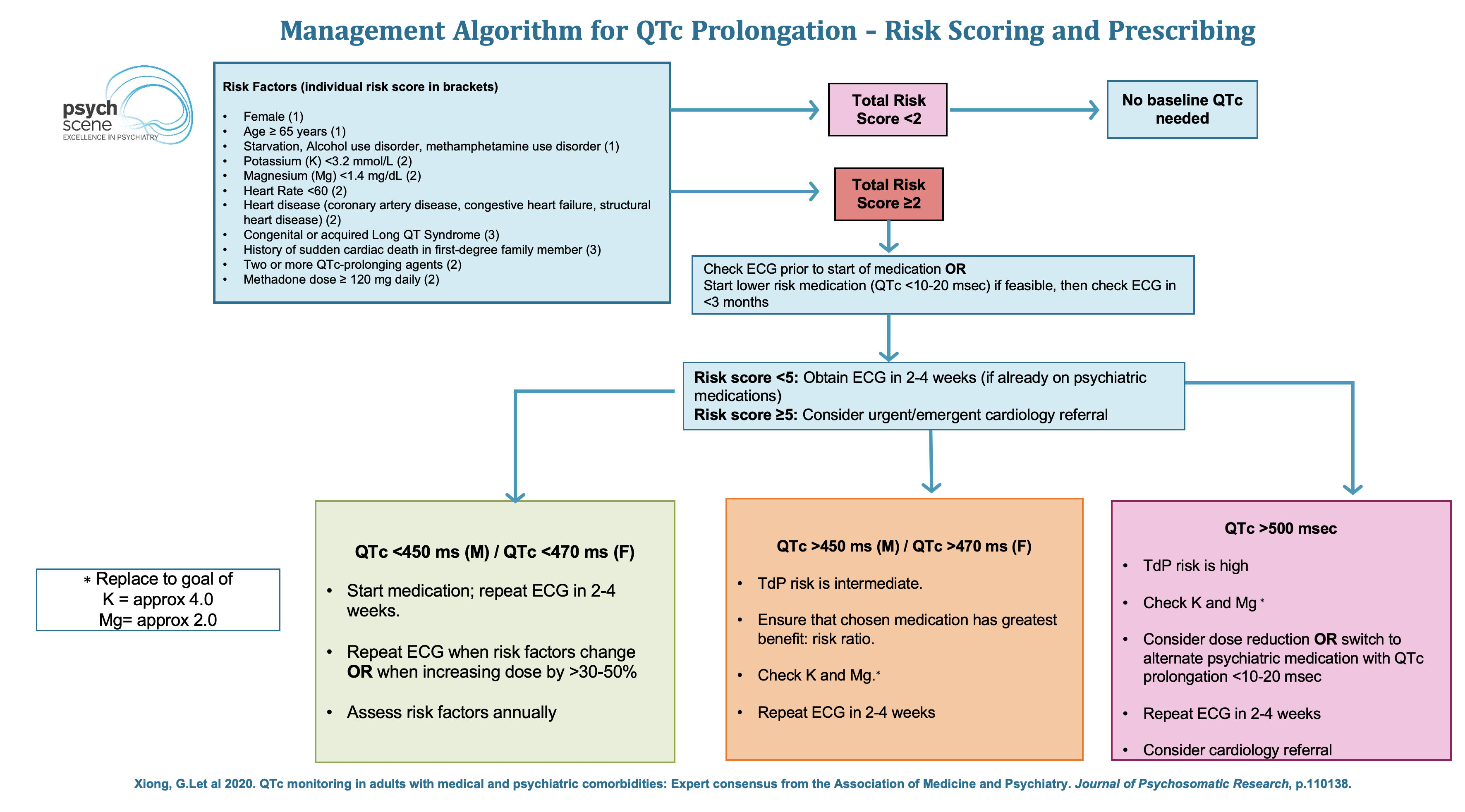 Psychotropics are associated with QTc interval prolongation, with some medications prolonging the QTc interval more than others.

Clinicians should be aware of the varied risk profiles of psychotropics concerning the QTc interval and take into account the various static and dynamic risk factors that prolong QT intervals.

A risk-benefit analysis should be carried out when prescribing medications that prolong QTc.

The measurement of the QT interval

The association between intravenous haloperidol and prolonged QT interval

American Academy of emergency medicine position statement: safety of Droperidol use in the emergency department

The cardiovascular safety profile of escitalopram