Psychedelics and Hallucinogens in Psychiatry – Mechanisms of Action and Clinical Application

Psychedelics are any of the so-called mind-expanding drugs that are able to induce states of altered perception and thoughts, frequently with a heightened awareness of sensory input but with diminished control over what is being experienced. [Rucker J et al, 2018]

Hallucinogens were originally referred to as psychotomimetics after Isbell and colleagues described lysergic acid diethylamide (LSD) as “the most effective and safest agent for inducing an experimental, but reversible, psychosis in nonpsychotic subjects”. [Isbell et al. 1956]

However, in the 1940s and 1950s, LSD was actually also being trialled as a psychotherapeutic agent for treating depression and anxiety.

Today, hallucinogens are not classified as ‘psychosis inducers’ but instead are classified by their chemical structure, pharmacological mechanism of action, and clinical properties [Romeu et al. 2016]:

The feature that distinguishes the psychedelic agents from other classes of drugs is their capacity reliably to induce states of altered perception, thought, and feeling that are not experienced otherwise except in dreams or at times of religious exaltation. [Jaffe J., 1990]

In this article, we cover:

Many people remember vaguely that LSD and other psychedelic drugs were once used experimentally in psychiatry, but few realize how much and how long they were used. This was not a quickly rejected and forgotten fad. Between 1950 and the mid-1960s there were more than a thousand clinical papers discussing 40,000 patients, several dozen books, and six international conferences on psychedelic drug therapy. It aroused the interest of many psychiatrists who were in no sense cultural rebels or especially radical in their attitudes. [Greenspoon L & Bakalar J., 1979]

However, in the 1960s and 1970s, political parties in the USA blamed anti-war attitudes and the countercultural revolution as a consequence of drug use.

Use of (5R,8R)-(+)-lysergic acid-N,N-diethylamide (LSD) and marijuana by so-called hippies who demonstrated against the Vietnam War during the 1960s created great consternation among authorities and legislative bodies, both at the federal and state levels. Antiwar attitudes and rejection of conventional social norms by adolescents and college students were often perceived by the mainstream culture to be a consequence of drug use; hence, these substances were often believed to be “perverting” the minds of our youth.

Furthermore, the outspoken Harvard University professor and firebrand Timothy Leary encouraged young people to “turn on, tune in, and drop out,” essentially coaching them to take drugs, discover their true selves, and abandon convention. Such messages did not play well with the mainstream culture, all while the mass media fanned the flames of public hysteria with greatly exaggerated reports of drug-induced insanity, chromosomal damage, attempts to fly, and so forth. [Nichols D , 2016]

These laws effectively prohibited legitimate experimental research into whether these psychoactive compounds may have potential therapeutic effects. It wasn’t until the mid-1990’s that more research was performed with some experimental data produced on psilocybin and DMT. [Strassman et al. 1994]

However, it would take until 2014 for the first modern human trial to investigate LSD-assisted psychotherapy. [Gasser et al. 2014]

As of 2006, the US Religious Freedom Restoration Act now permits certain psychedelic concoctions to be used in various religious practices, including mescaline.

The prodrug psilocybin (4-phosphoryloxy-N, N-dimethyltryptamine) is found in several types of mushrooms and, when ingested, is metabolised to the serotonergic receptor agonist psilocin.

Psilocybin (4-phosphoryloxy-N, N-dimethyltryptamine) is most accurately characterized as a prodrug. It is dephosphorylated by hepatic first-pass metabolism into the 5-HT2A, 1A and 2C receptor agonist psilocin (Presti & Nichols, 2004), with subjective effects lasting between 4 and 6 hours. 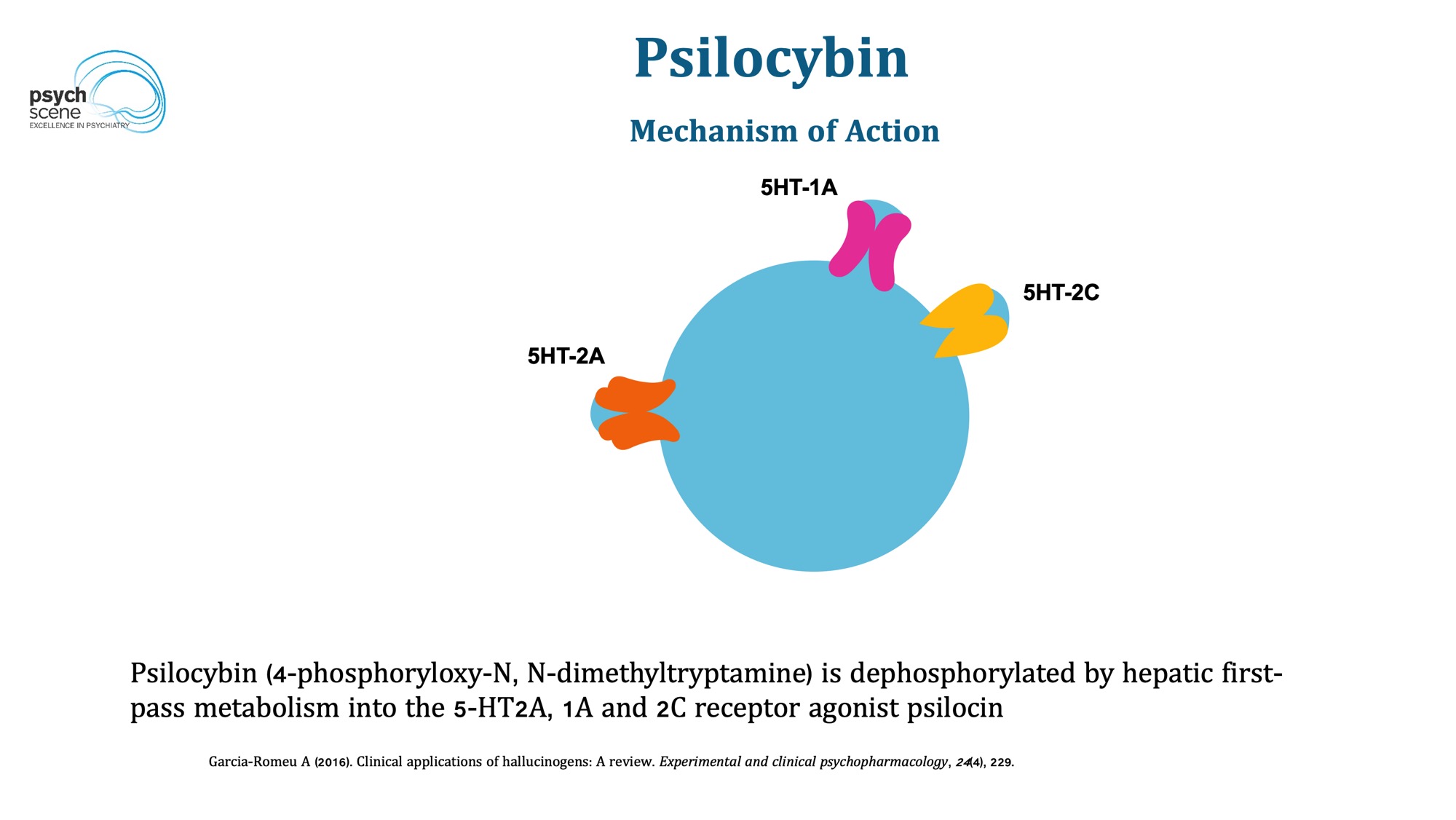 According to the RElaxed Beliefs Under pSychedelics (REBUS) model, psychedelics appear to relax the weighting of internal models, particularly at a high hierarchical level in mind and brain facilitating the occurrence of insight and perspective change.

Proof-of-principle studies in healthy individuals showed that psilocybin-assisted psychotherapy elicited long-lasting positive changes to behaviour, attitudes, and personality. [Griffiths et al. 2008] Volunteers in these experiments also reported that while under the influence of psilocybin, there were challenging and frightening experiences to overcome; however, these were manageable and resolvable with interpersonal support.

Pilot studies have since suggested that when used in conjunction with CBT, psilocybin may be useful for smoking cessation [Garcia-Romeu et al. 2014]; [Johnson et al. 2014] and treating alcoholism. [Bogenschutz et al. 2015]

In 2021, the results of phase 2, double-blind, randomised, controlled trial involving patients with long-standing, moderate-to-severe major depressive disorder comparing psilocybin with escitalopram over a 6-week period were published. The study was a small study with a total of 59 patients. The study showed:

On the basis of the change in depression scores on the QIDS-SR-16 at week 6, this trial did not show a significant difference in antidepressant effects between psilocybin and escitalopram in a selected group of patients. Larger and longer trials are required to compare psilocybin with established antidepressants. [Carhart-Harris et al., 2021]

A phase 2 double-blind trial for adults with treatment-resistant depression where they received a single dose of psilocybin 25 mg, 10 mg, or 1 mg (control), along with psychological support showed: [Goodwin, 2022]

Read more on the therapeutic mechanisms of psilocybin in psychiatric disorders. 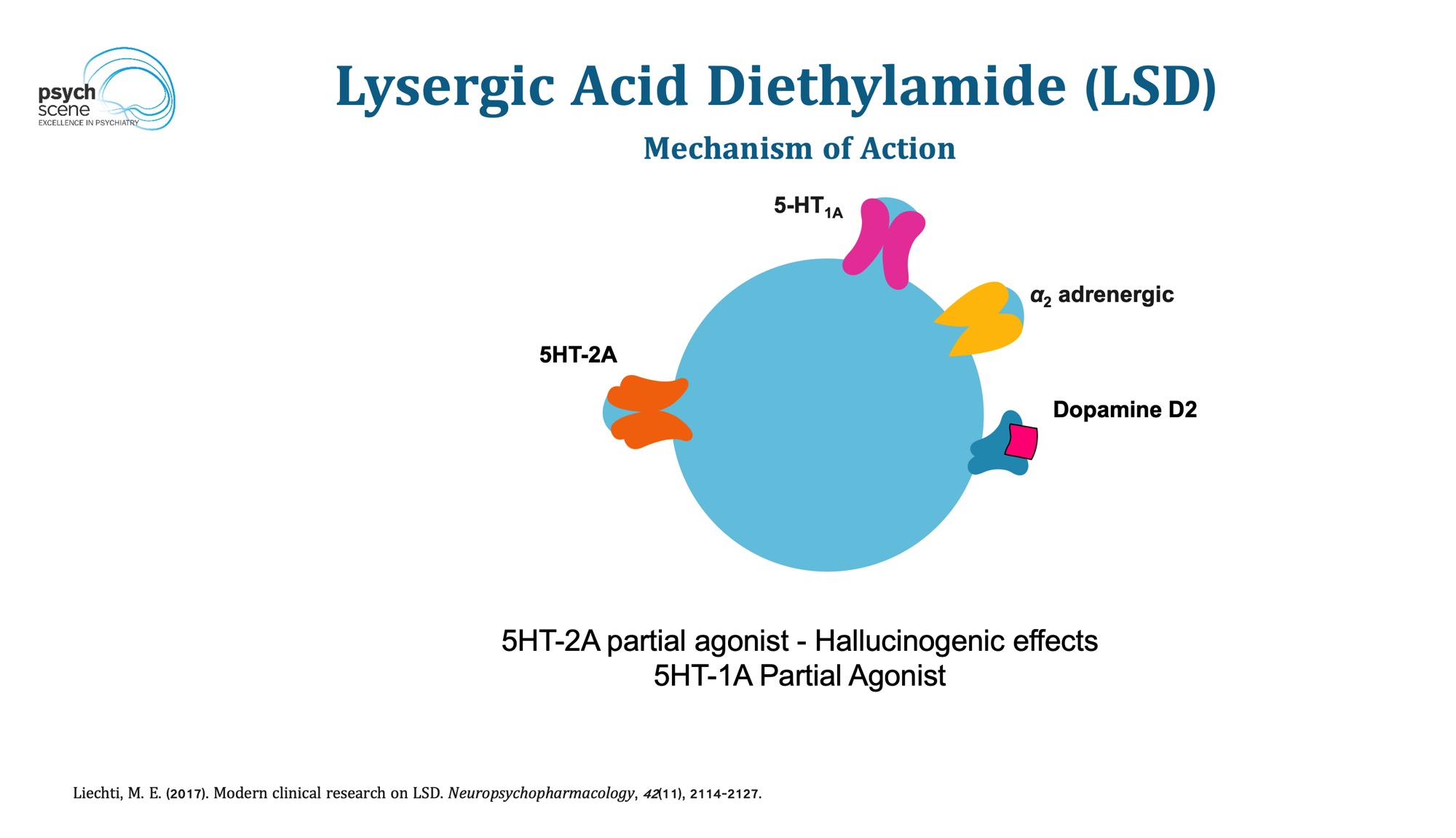 Mescaline (3,4,5-trimethoxy-β-phenethylamine) was the first naturally occurring psychedelic alkaloid to be isolated in the laboratory. It was isolated from Lophophora williamsii, a small cactus native to northern Mexico and the southwestern United States, in 1896 by German chemist Arthur Heffter. It is also found in the San Pedro cactus (Echinopsis pachanoi), and derived from the amino acid phenylalanine.

The Lophophora williamsii cactus is used by indigenous peoples of North and South America, and in Nahuatl is known as péyotl (aka peyote; Prue, 2013). Religious use of peyote has been estimated to extend back more than 5,700 years.

Although mescaline has a similar effect as LSD or psilocybin, it is generally believed to be 1,000 to 3,000 times less potent. [Cassels and Saez-Briones 2018]

Aldous Huxley wrote of his experiences with the mescaline in The Doors of Perception (Huxley, 1954). Mescaline is a non-selective 5HT2 receptor agonist.

Research is in mainly observational stages; however, studies in native Americans shows the potential of mescaline in alcohol addiction.

DMT is known to act on the following receptors:

DMT has been implicated as a mediator of consciousness and perception, particularly visual perception, via interactions with trace amine-associated receptors (TAAR). [Wallach 2009] 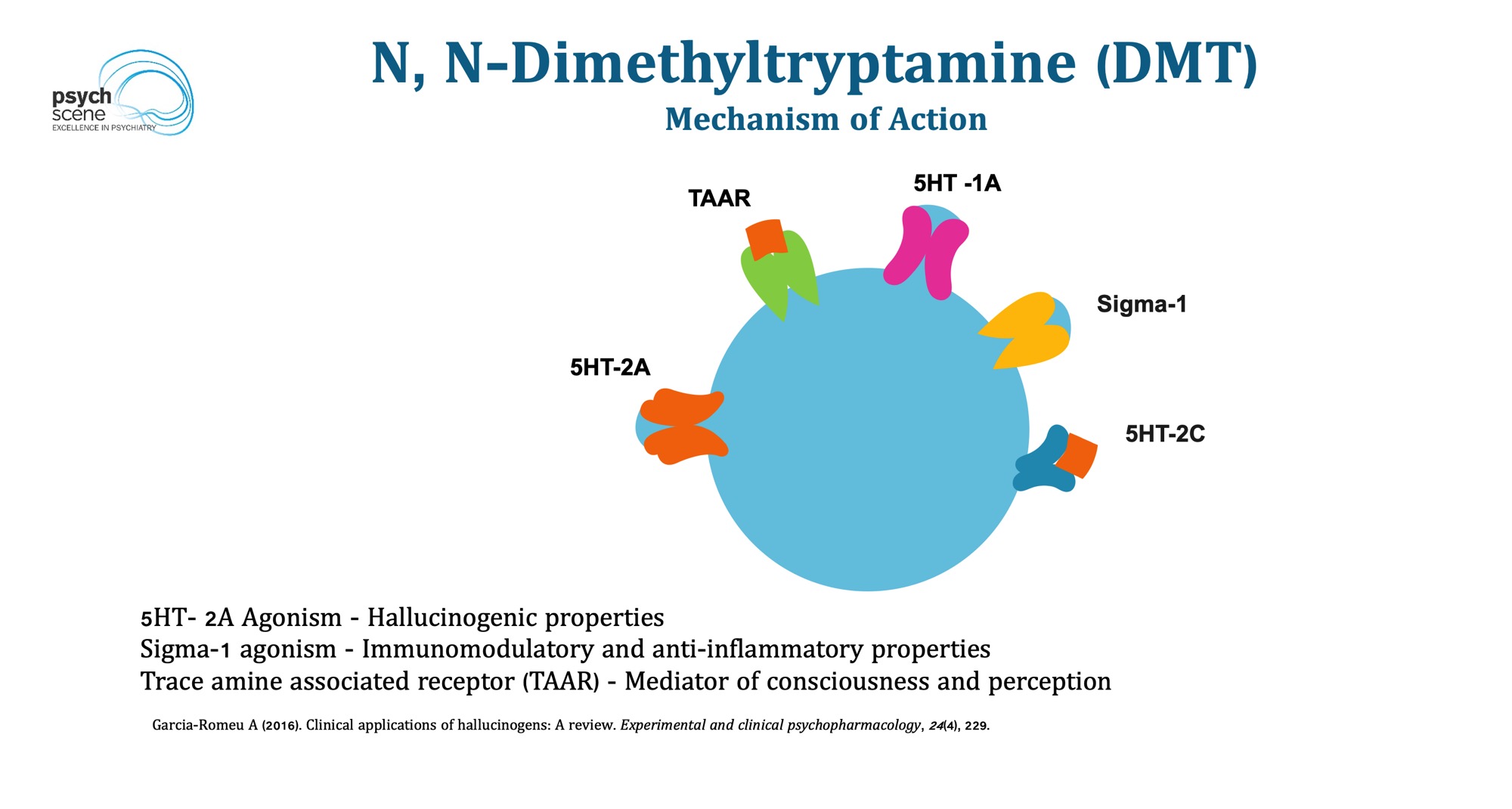 There are as of yet no clinical studies using DMT as a therapeutic agent.

Ayahuasca is thought to contain more than 90 different plant species from 38 plant families. 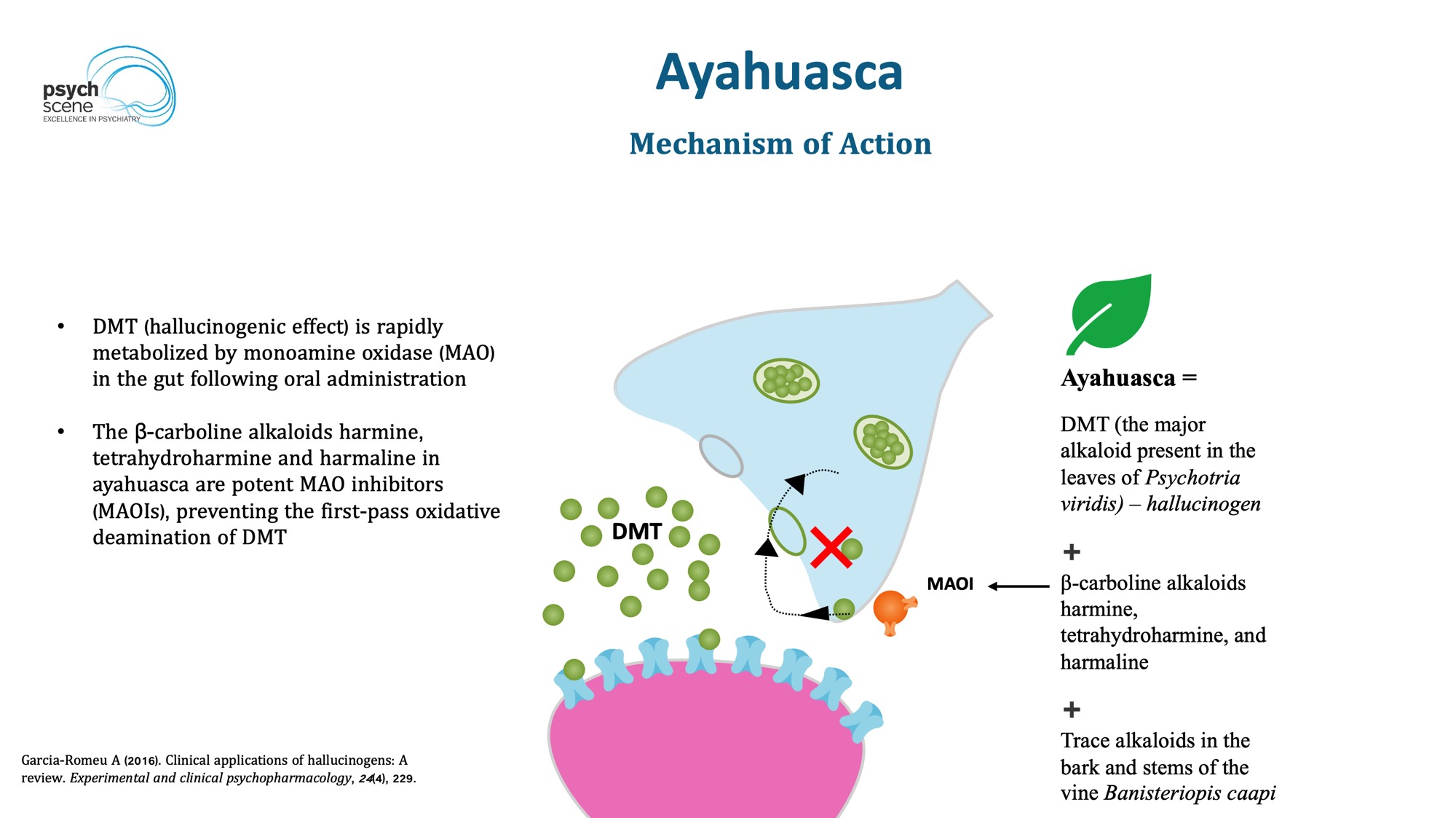 The majority of ayahuasca brews contain:

Ayahuasca may have potential in addiction and depression; however, more methodologically robust studies are needed.

While MDMA is not a classic psychedelic we cover MDMA as it is classified under entactogens which influences emotional connectivity. 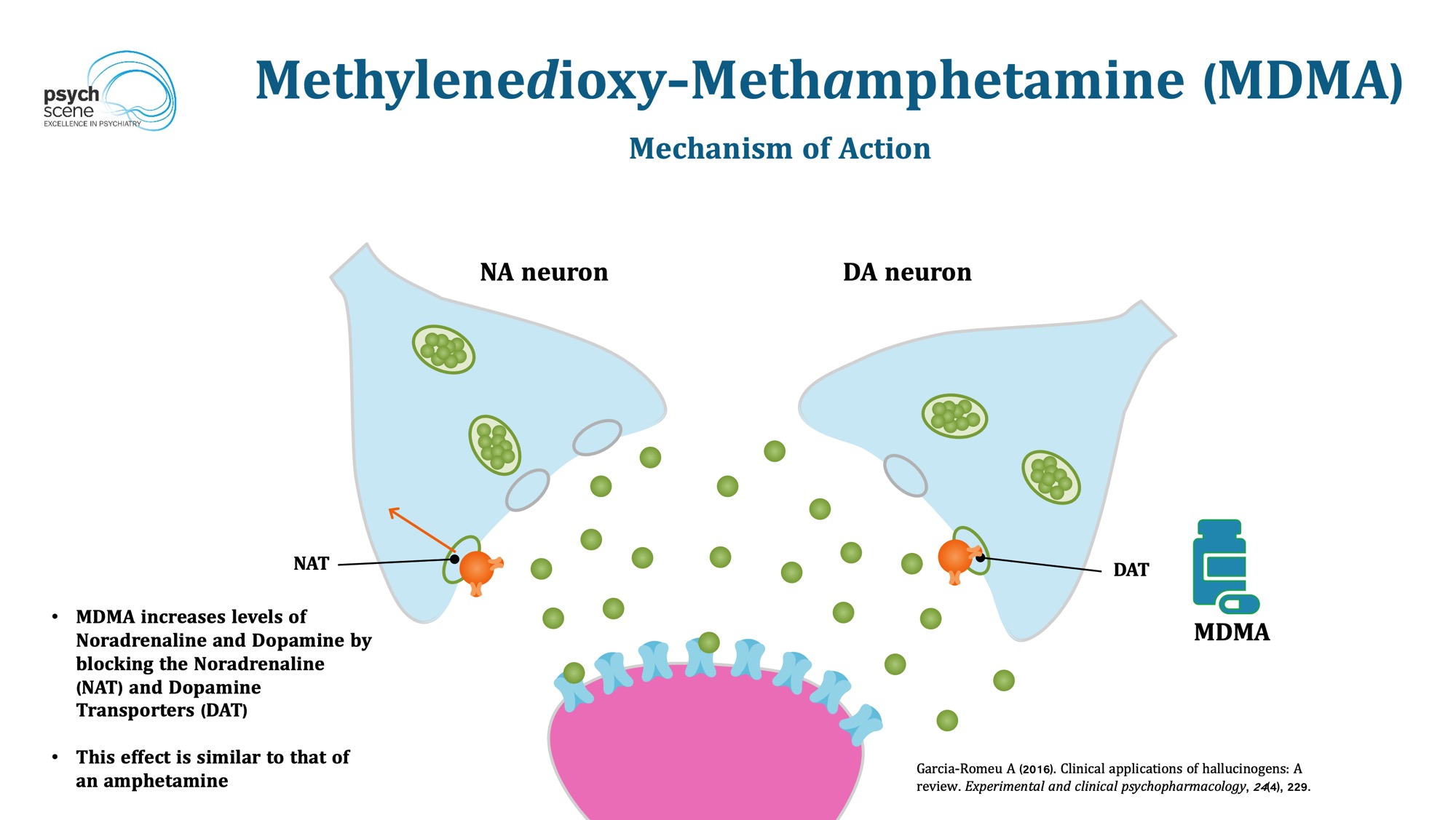 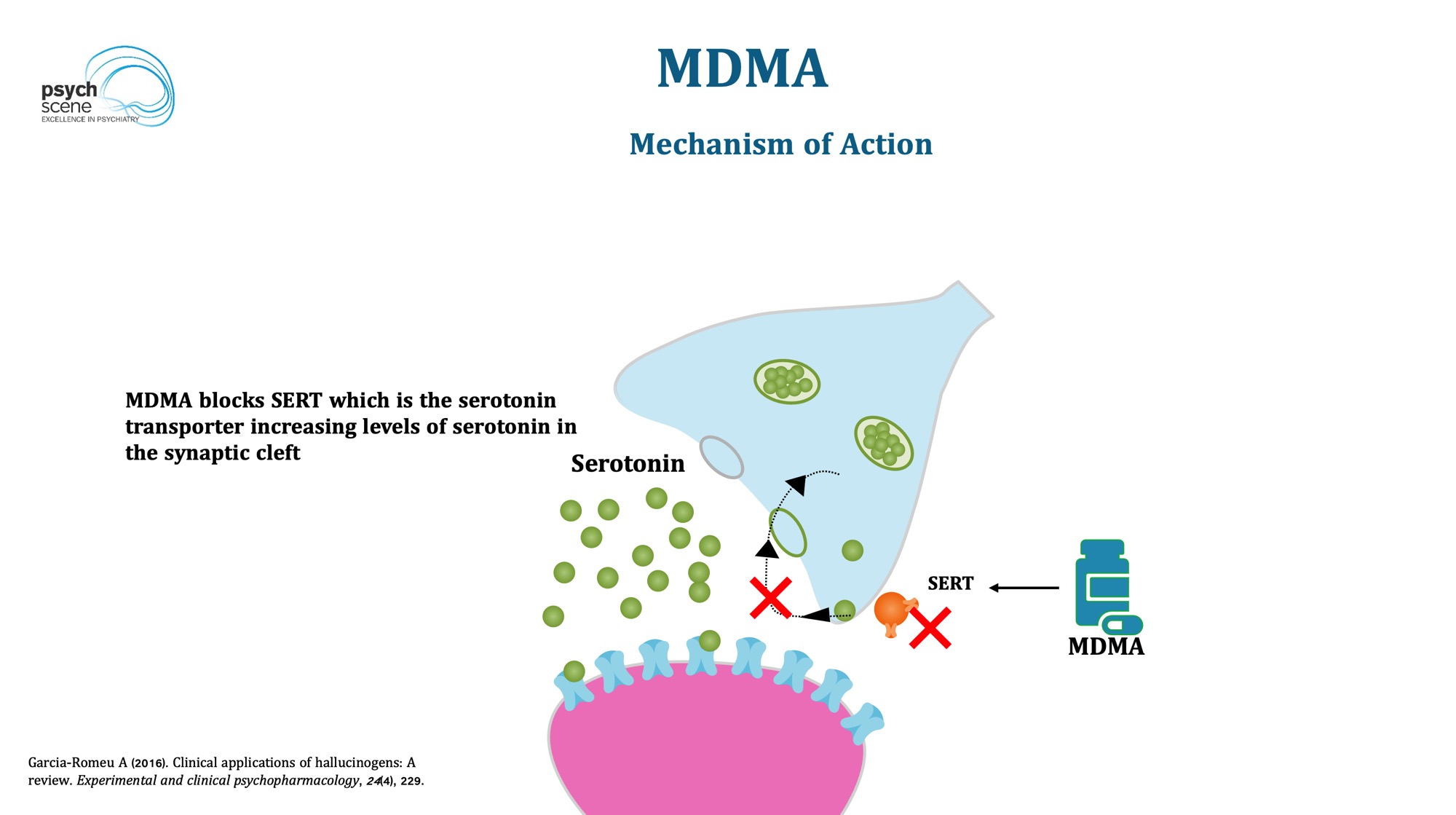 Activity at 5HT -1A and 5HT-1B  receptors attenuates feelings of depression and anxiety, reduces the amygdala fear response and increases levels of self-confidence.

Effects at alpha-2 receptors may result in a paradoxical relaxation/sedation effect, which could be beneficial in the context of trauma-induced hypervigilance.

MDMA has been shown to facilitate the release of oxytocin, the hormone associated with early infantile bonding, which may increase levels of empathy and closeness and dampen fear-related amygdala activity, causing a decrease in stress response and social anxiety. [Sessa B et al., 2019]

MDMA increases fear extinction through a mechanism dependent on elevated levels of brain derived neurotropic factor (BDNF) in the amygdala which might account for the observed phenomenon of MDMA psychotherapy allowing for patients’ safe recall of painful emotional memories, that are usually avoided due to the overwhelming negative affect that usually accompanies recall of such events. Increased prosocial feelings , improved tolerance for unpleasant memories and enhanced empathy and self-compassion, can promote a strong therapeutic alliance to effectively process traumatic memories.

An RCT (Phase 3) comparing MDMA vs Placebo in severe PTSD showed that three doses of MDMA given in conjunction with manualised therapy over the course of 18 weeks resulted in a significant and robust attenuation of PTSD symptoms and functional impairment as assessed using the CAPS-5 and SDS. MDMA also significantly mitigated depressive symptoms and did not increase the occurrence of suicidality during the study. [Mitchell et al., 2021]

Other indications for MDMA for which studies are ongoing and being considered are social anxiety in autism, alcohol addiction and mood disorders.

One of the largest placebo-controlled study (n=191) used a ‘self-blinding’ citizen science initiative, where participants were given online instructions on how to incorporate placebo control into their microdosing routine without clinical supervision.

All psychological outcomes improved significantly from baseline to after the 4 weeks long dose period for the microdose group; however, the placebo group also improved and no significant between-groups differences were observed. Acute (emotional state, drug intensity, mood, energy, and creativity) and post-acute (anxiety) scales showed small, but significant microdose vs. placebo differences; however, these results can be explained by participants breaking blind. The findings suggest that the anecdotal benefits of microdosing can be explained by the placebo effect. [Szigeti et al., 2021]

The recent clinical interest in the therapeutic use of serotonergic psychedelics is primarily based on earlier anecdotal evidence [Nichols 2016]; [Romeu et al. 2016] as well as some recently published high-profile articles [Griffiths et al. 2016]; [Sanches et al. 2016]; [Carhart-Harris et al. 2017]; [Johnson et al. 2017] that have shown remarkable efficacy and few adverse events in comparison to other CNS drugs such as opiates and stimulants.

MDMA administration was overall safe in physically and psychiatrically healthy subjects and in a medical setting. However, the risks of MDMA are likely higher in patients with cardiovascular disease and remain to be investigated in patients with psychiatric disorders. [Vizeli P & Liechti M, 2017]

This guideline aims to provide psychiatric screening criteria that will ensure patient safety as well as the psychiatric applicability of administering psychedelic-assisted psychotherapy:

Studies on lysergic acid diethylamide (LSD-25). I. Effects in former morphine addicts and development of tolerance during chronic intoxication

Clinical Applications of Hallucinogens: A Review

Drug addiction and drug abuse, in Goodman and Gilman’s the Pharmacological Basis of Therapeutics

Biochemistry and neuropharmacology of psilocybin mushrooms

Reactions to psilocybin administered in a supportive environment

Psilocybin-occasioned mystical experiences in the treatment of tobacco addiction

Trial of Psilocybin versus Escitalopram for Depression

LSD-assisted psychotherapy for anxiety associated with a life-threatening disease: a qualitative study of acute and sustained subjective effects

Indigenous supports for recovery from alcoholism and drug abuse: The Native American Church

The Doors of Perception

Huxley A. The Doors of Perception. London: Chatto and Windus; 1954.

Endogenous hallucinogens as ligands of the trace amine receptors: a possible role in sensory perception

Clinical investigations of the therapeutic potential of ayahuasca: rationale and regulatory challenges

On some remarkable narcotics of the Amazon Valley and Orinoco

Spruce, Richard. “On some remarkable narcotics of the Amazon Valley and Orinoco.” Ayahuasca Reader: Encounters with Amazon’s Sacred Vine (1873): 83-86.

A Review of 3,4-methylenedioxymethamphetamine (MDMA)-Assisted Psychotherapy

Psilocybin produces substantial and sustained decreases in depression and anxiety in patients with life-threatening cancer: A randomized double-blind trial

Antidepressant Effects of a Single Dose of Ayahuasca in Patients With Recurrent Depression: A SPECT Study

Single-dose psilocybin for a treatment resistant episode of major depression

Neural correlates of the LSD experience revealed by multimodal neuroimaging

Hallucinogen persisting perception disorder: what do we know after 50 years?

Effects of the hallucinogen 2,5-dimethoxy-4-iodophenethylamine (2C-I) and superpotent N-benzyl derivatives on the head twitch response

Halberstadt A and Geyer M. Effects of the hallucinogen 2,5-dimethoxy-4-iodophenethylamine (2C-I) and superpotent N-benzyl derivatives on the head twitch response. Neuropharmacology. 2014; 77():200-7.

The nature of 3, 4-methylenedioxymethamphetamine (MDMA)-induced serotonergic dysfunction: evidence for and against the neurodegeneration hypothesis