Psychological trauma involves witnessing of a traumatic or life-threatening event directly to yourself or others. The individual is likely to experience intense fear, horror, and helplessness, which can result in a permanent or transient psychological wound characterised by physical, cognitive, emotional and behavioural changes.

The trauma is acute and transient for most and results in minimal functional impairment. Psychological trauma can be classified into 4 clusters of symptoms. These include:

For some, however, the syndrome persists, and this is termed post-traumatic stress disorder (PTSD). A PTSD diagnosis was originally considered a normal response to an extreme situation however the presence of symptoms for an extended period of time beyond one month is indicative of an abnormal adaptation in the brain.

The prevalence of PTSD varies across countries. It occurs in 5-10% of the population and has a 2:1 female to male ratio. The gender bias may be a result of a combination of a greater propensity to lifetime violence exposure and genetic vulnerability (variation in the ADCYAP1R1 (pituitary receptor) gene). [Yehuda et al., 2015]

In military populations, the risk is more significant. For example, 10 years after the Vietnam war the rates of current PTSD went up to 28% in those who had experienced combat exposure. A recent analysis showed that 40 years after the end of the war, 11% of Vietnam veterans are experiencing PTSD symptoms. [Yehuda et al., 2015]

In civilian population samples, the rates vary from 0.2%-3.8%. A number of factors such as social supports, trauma type, and severity affect prevalence.

We covered Complex PTSD in a separate article.

The Diagnostic and Statistical Manual of Mental Disorders 5th Edition (DSM-5) recognises several criteria for a PTSD diagnosis. The PTSD criteria are as follows:

Exclusion – Trauma-related symptoms cannot be attributed to anything else such as medications or substance abuse.

However, trauma outcomes vary across individuals, and this appears to be dependent on genetic susceptibility factors, history of prior psychological trauma, or an additional physical injury at the time of the traumatic event such as traumatic brain injury (TBI).

The neurobiology of PTSD is complex and involves neuroendocrine, neurochemical and neuroanatomical changes in neural networks.

The hypothalamic-pituitary-adrenal (HPA) axis is the central coordinator of how humans respond to stress. The stress response starts in the hypothalamus, where paraventricular neurons (PVN) secrete corticotropin-releasing hormone (CRH).

Sustained cortisol exposure has an adverse effect on the brain, particularly hippocampal neurons, resulting in impaired neurogenesis and neuroplasticity.

The hippocampus and prefrontal cortex have an inhibitory effect on HPA, while the amygdala and aminergic brain stem neurons stimulate the HPA. 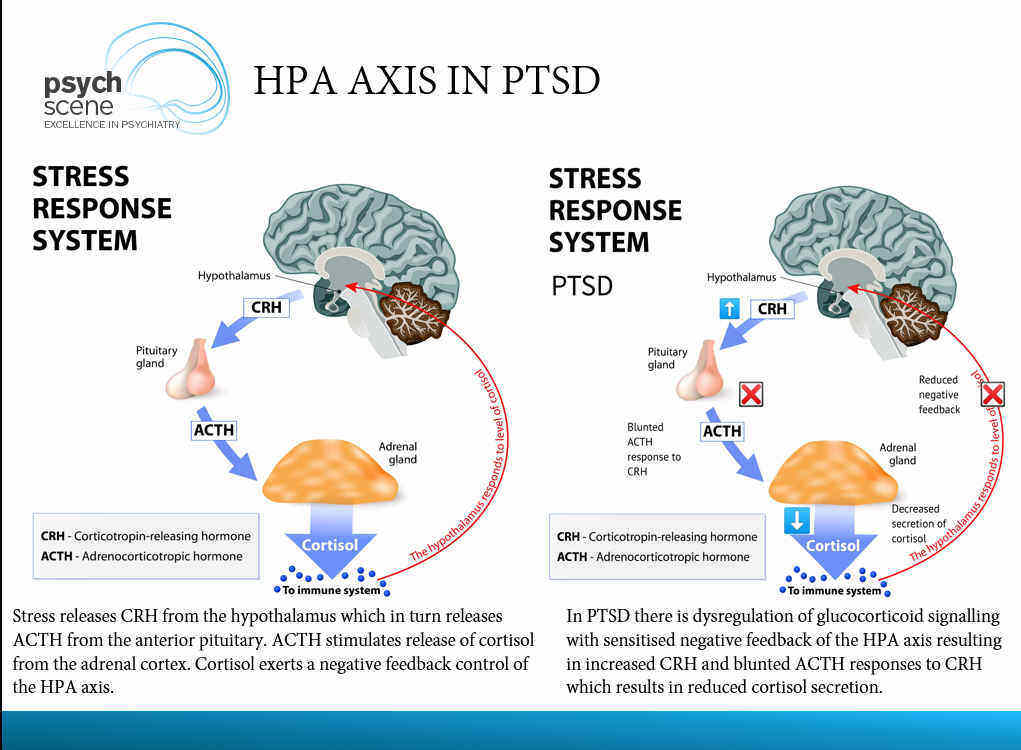 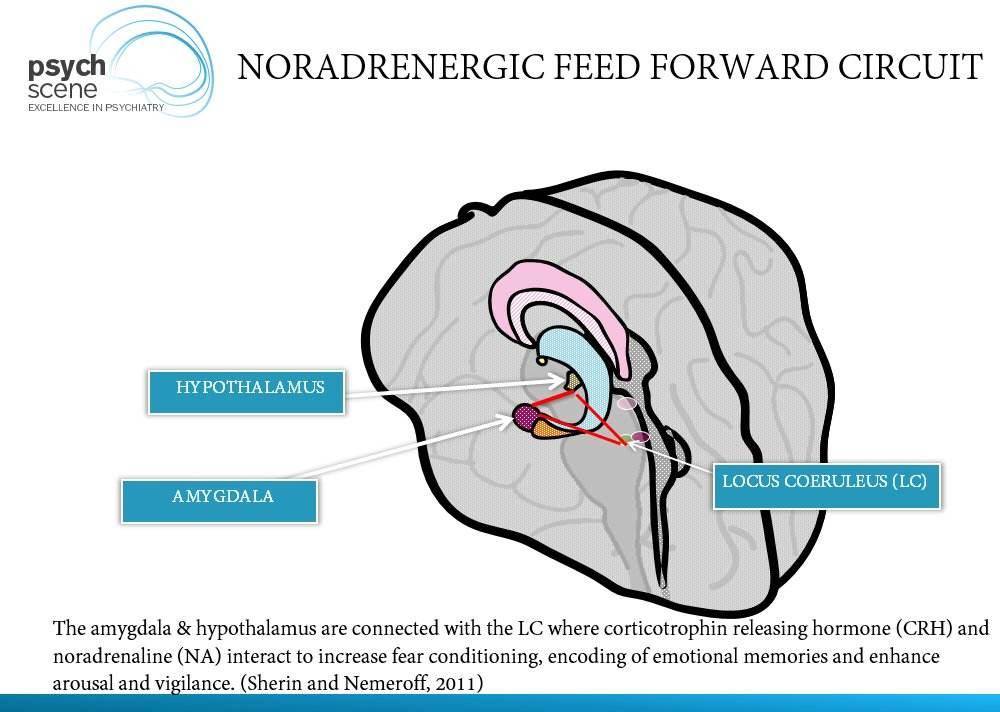 Using structural brain imaging, circuits that are associated with adaptation to stress and fear conditioning have been shown to be structurally altered in patients with PTSD. 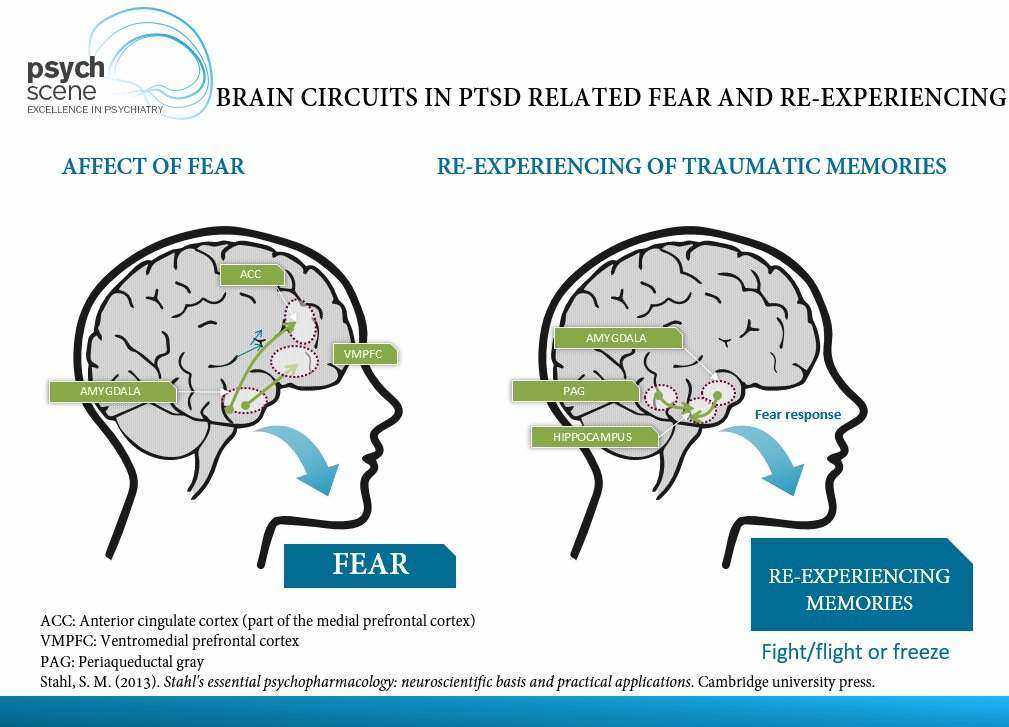 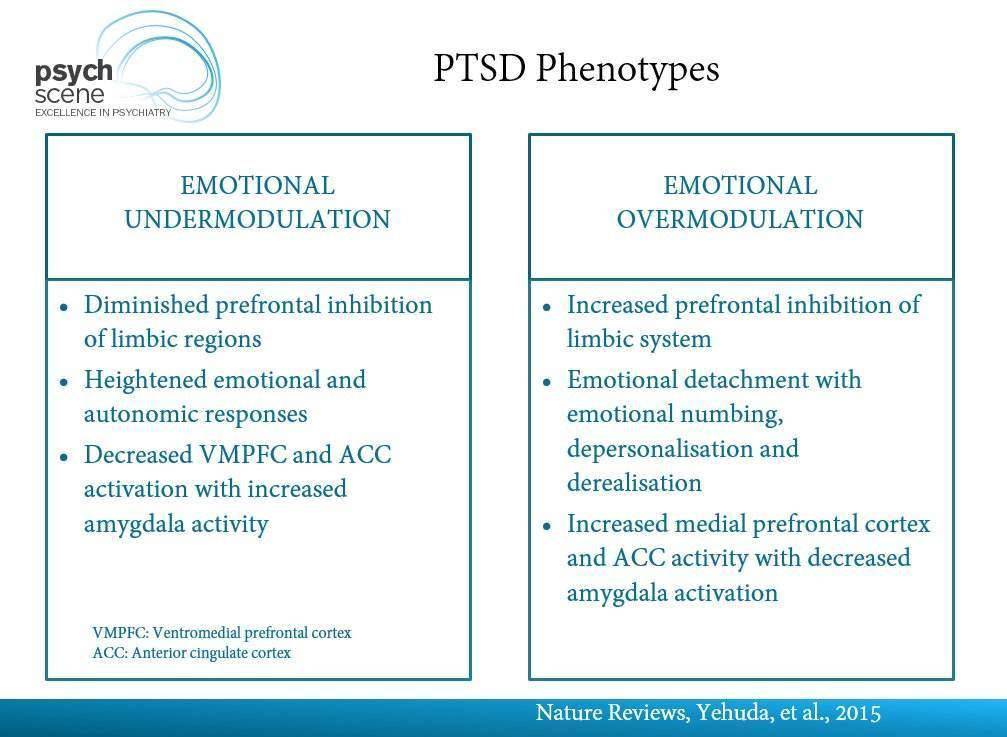 Three key brain networks have been identified as central to higher cognitive function:

The anterior insula acts as a switch between engaging the executive network and disengaging the default mode network allowing for better functioning of higher cognitive processes.

Abnormalities in these three areas are associated with specific clinical symptoms in PTSD as shown in the diagram below. [Yehuda et al., 2015] 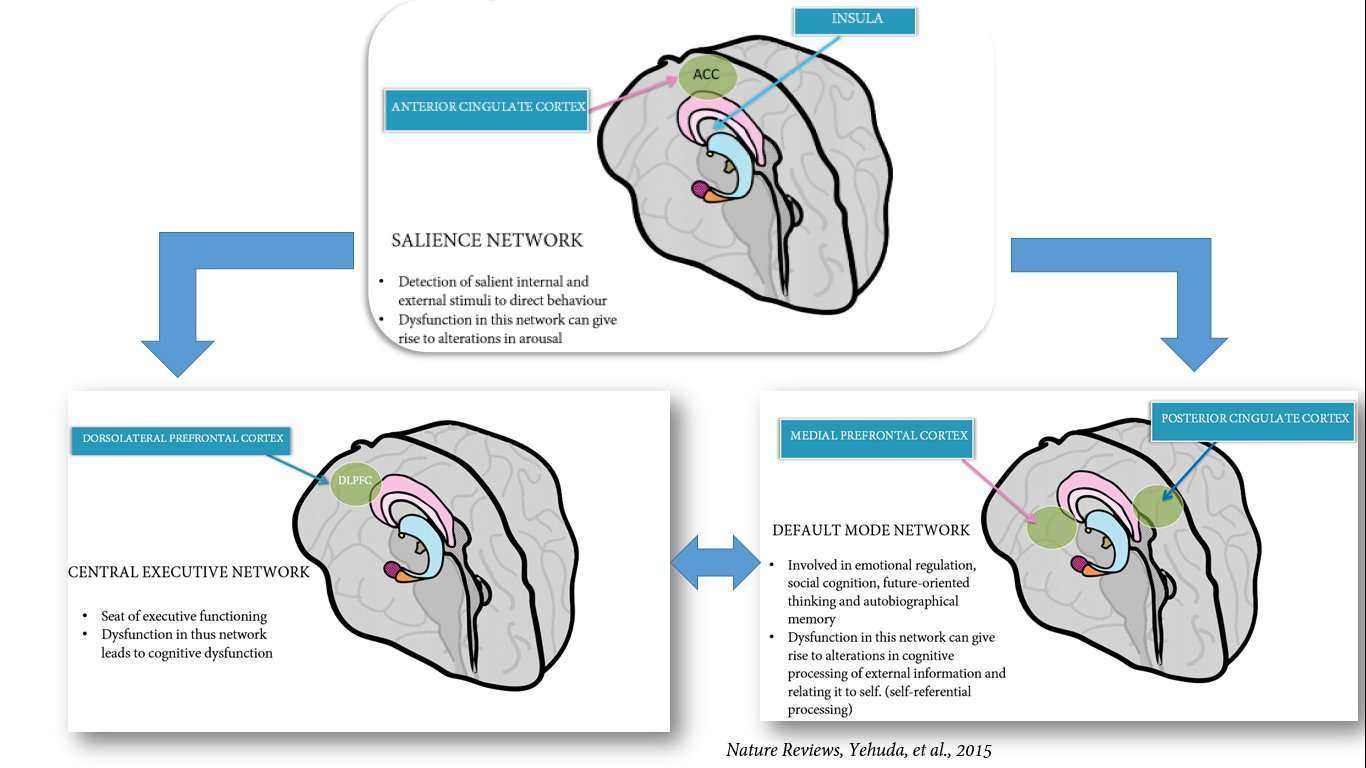 PTSD develops through a combination of psychological and biological mechanisms.

In some cases, a combination of medication and psychotherapy is required. 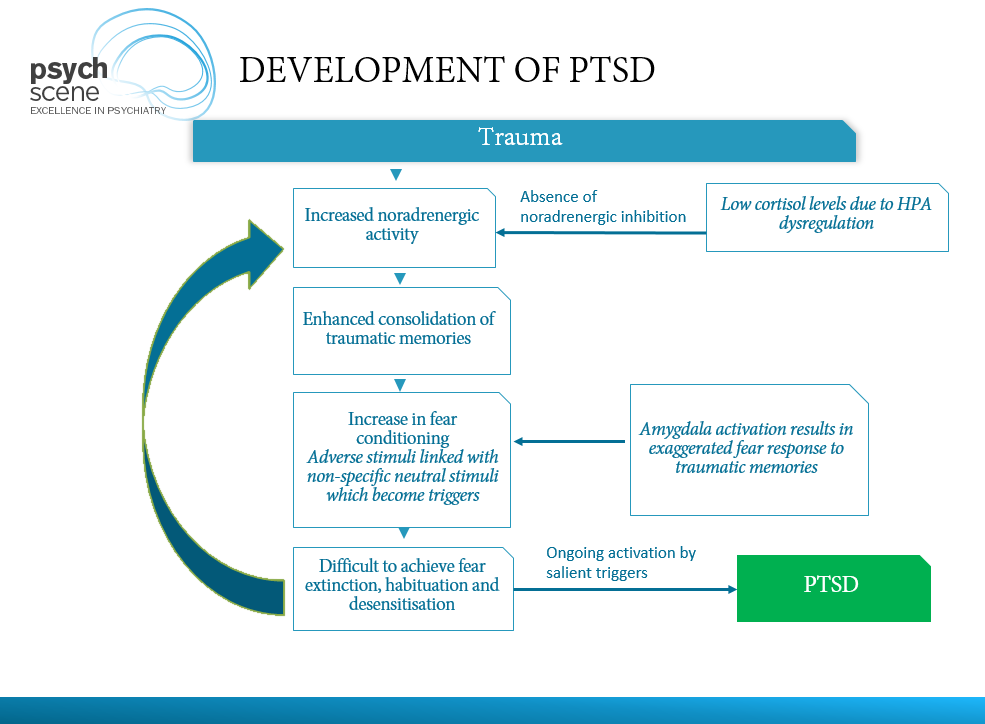 Treatment aims to achieve fear extinction, desensitisation and intervene in the kindling process.

Trauma-focused CBT has been most extensively studied and shown to be effective.

Prolonged exposure therapy and cognitive processing therapy are two types of trauma-focused CBT. They are based on the principles of extinction learning, habituation and desensitisation.

EMDR is a “A therapy aiming to process distressing memories by having the patient recall distressing images while receiving one of several types of bilateral sensory input, including side-side eye movements” – Yehuda et al., 2015

“Patients with a history of interpersonal violence, early life trauma or those with a complex presentation of PTSD that includes emotional detachment might be better treated with phase-oriented approaches.

Once these skills have been developed, the patient can then participate in modified exposure-based therapy focusing on emotional stability and negative personal schemas.” – Yehuda et al., 2015

“Current evidence favours selective serotonin reuptake inhibitors as the class with the most evidence supporting their use as first-line psychopharmacological treatment options.” – Yehuda et al., 2015

A recent systematic review, commissioned by the WHO, showed that although some SSRIs are statistically superior to placebo, the effect size is small. [Koenigs and Grafman, 2009]

Many other interventions are currently used off-label to treat PTSD, and these drugs are based on the neurobiology of PTSD symptoms. These include:

Algorithm for Pharmacological Management of PTSD. 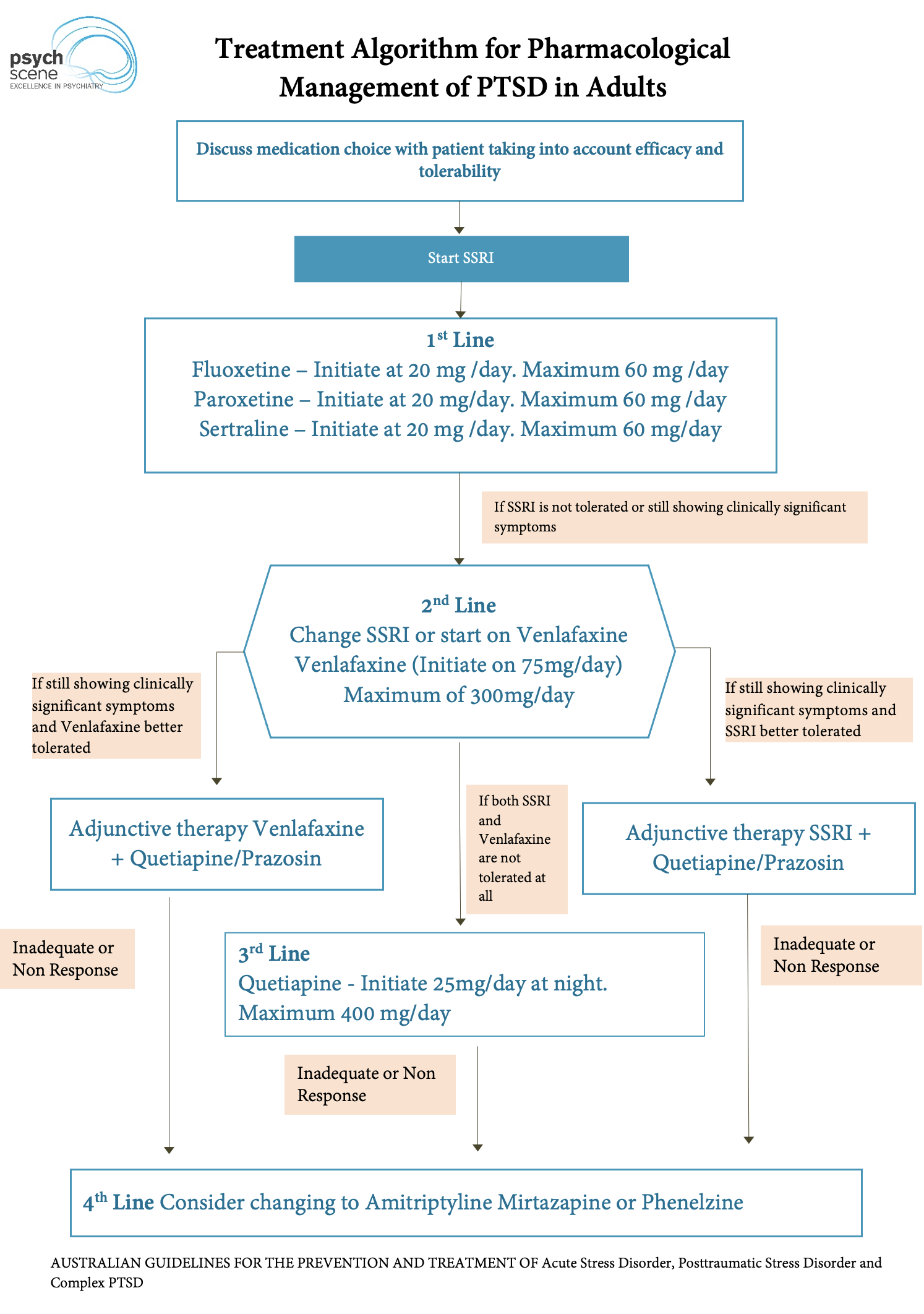 PTSD is co-morbid unless proven otherwise. Diagnostic overshadowing, whereby symptoms are attributed only to trauma, may result in misdiagnosis and inadequate treatment.

Therefore, it is crucial for clinicians to diagnose and treat any other comorbidities.

Traumatic stress has a broad range of effects on the function and structure of discrete regions of the brain that have critical roles in emotion, memory, and reactivity.

PTSD is best understood as a heterogenous disorder with different phenotypes based on the brain circuits involved. Co-morbidity is high and clinicians should always be vigilant for the presence of other psychiatric disorders.

Prazosin for treatment of post-traumatic stress disorder: a systematic review and meta-analysis.

High-dose prazosin for the treatment of post-traumatic stress disorder.