Pharmacogenetics and pharmacogenomics describe the study of genetic variations that can be used to inform and predict an individual’s response to drugs. [Weinshilboum and Wang 2006], [Hicks 2015]

In psychiatry, the identification of genes associated with an individual’s response to pharmacotherapeutic drugs is designed to inform personalised treatments and improve treatment outcomes. [Singh et al 2014], [Polasek et al 2019]

The evidence has matured to a level where guidelines for implementation have emerged. [Hicks et al 2015], [Sebastian et al 2021], [van Westrhenen et al 2021]

After completing the Human Genome Project, it was expected that pharmacogenetics and the knowledge of a patient’s genetic signature would enable predictions of psychiatric treatment response and treatment-related adverse effects. However, the integration of genomic data has been challenging due to the complexity of how multiple genes interact with environmental factors, which then determine response. [1000 Genomes Project Consortium et al. 2015]

While the genetic architecture of many psychiatric disorders is slowly being identified—primarily through family and heritability studies – pharmacogenomic testing instead has focussed on the involvement of single nucleotide polymorphisms (SNPs) and copy number variants (CNVs) in genes encoding the human cytochrome P450 (CYP) drug metabolising enzymes [Foulds et al. 2016] and the blood-brain-barrier. [Singh et al. 2014], [Eap et al. 2021]

Read more on the epigenetics in psychiatric disorders.

In particular, for psychotropics, the CYP2C19, CYP2D6, CYP2B6, CYP3A4 enzymes and ABC family of the transporter (blood-brain-barrier) are highly polymorphic. They are responsible for the metabolism and CNS bioavailability of more than 50% of medications currently in clinical use. [Wang et al. 2009]; [Foulds et al. 2016]; [Eap et al. 2021]

Another example of the interindividual variability of SNPs affecting the metabolic capacity of CYP2C19 is with the administration of citalopram and escitalopram. [Mrazek et al 2011]; [Ji et al 2014], [Hicks et al 2015]

The enzyme superfamily, cytochrome P450 (CYP450), plays a key role in the metabolism of various drugs and xenobiotics. [Zanger and Schwab, 2013]

The CYP450 enzyme family consists of over 50 different isoenzymes and is the most important group of phase I drug metabolizers.

It is important to note that each CYP isoenzyme has a broad range of substrates, and for many substrates, a range of isoenzymes can metabolize them. However, CYP isoenzyme activity is heavily influenced by genetic polymorphisms that can increase or decrease activity or cause a particular isoenzyme to have no activity. 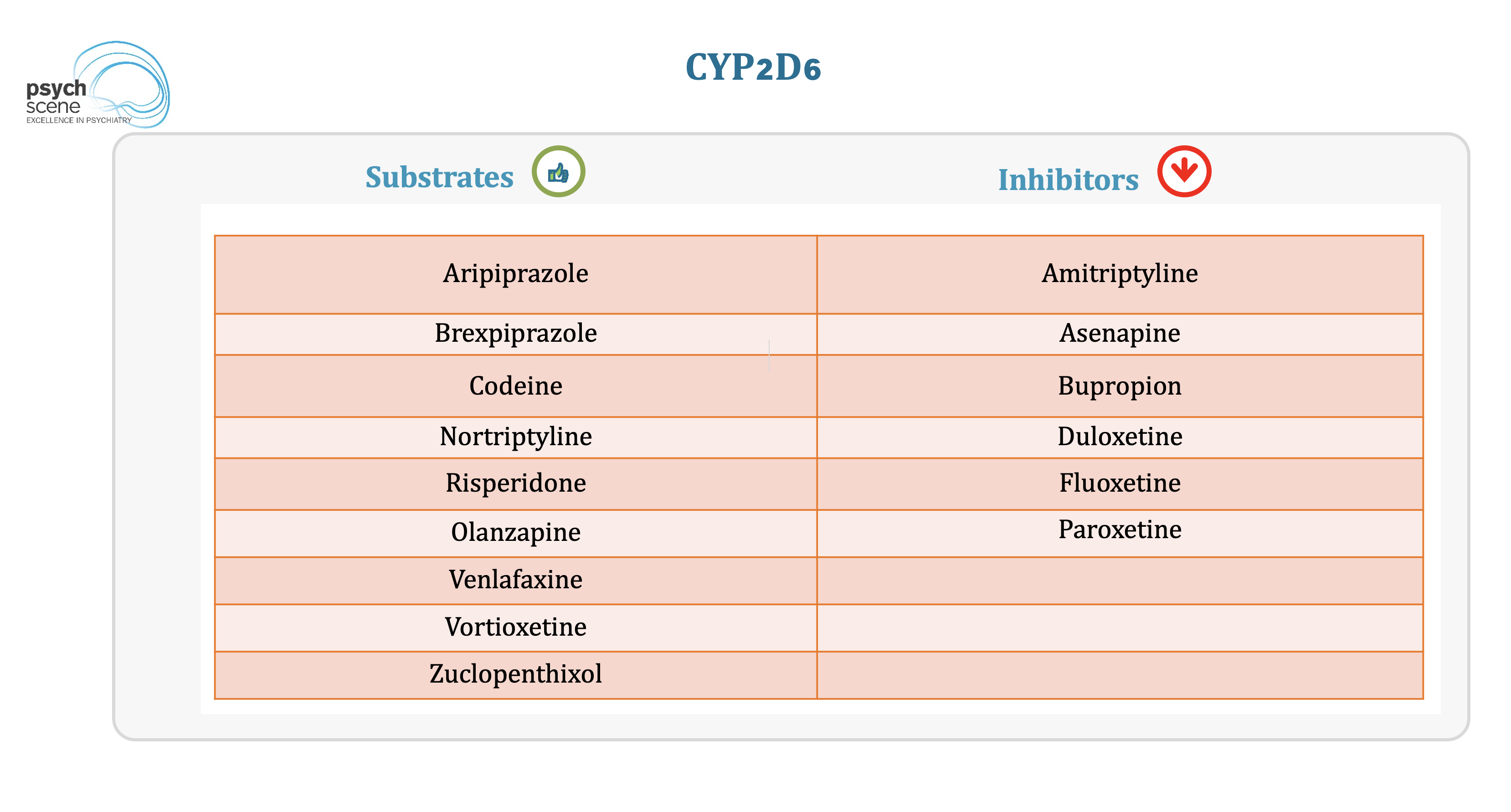 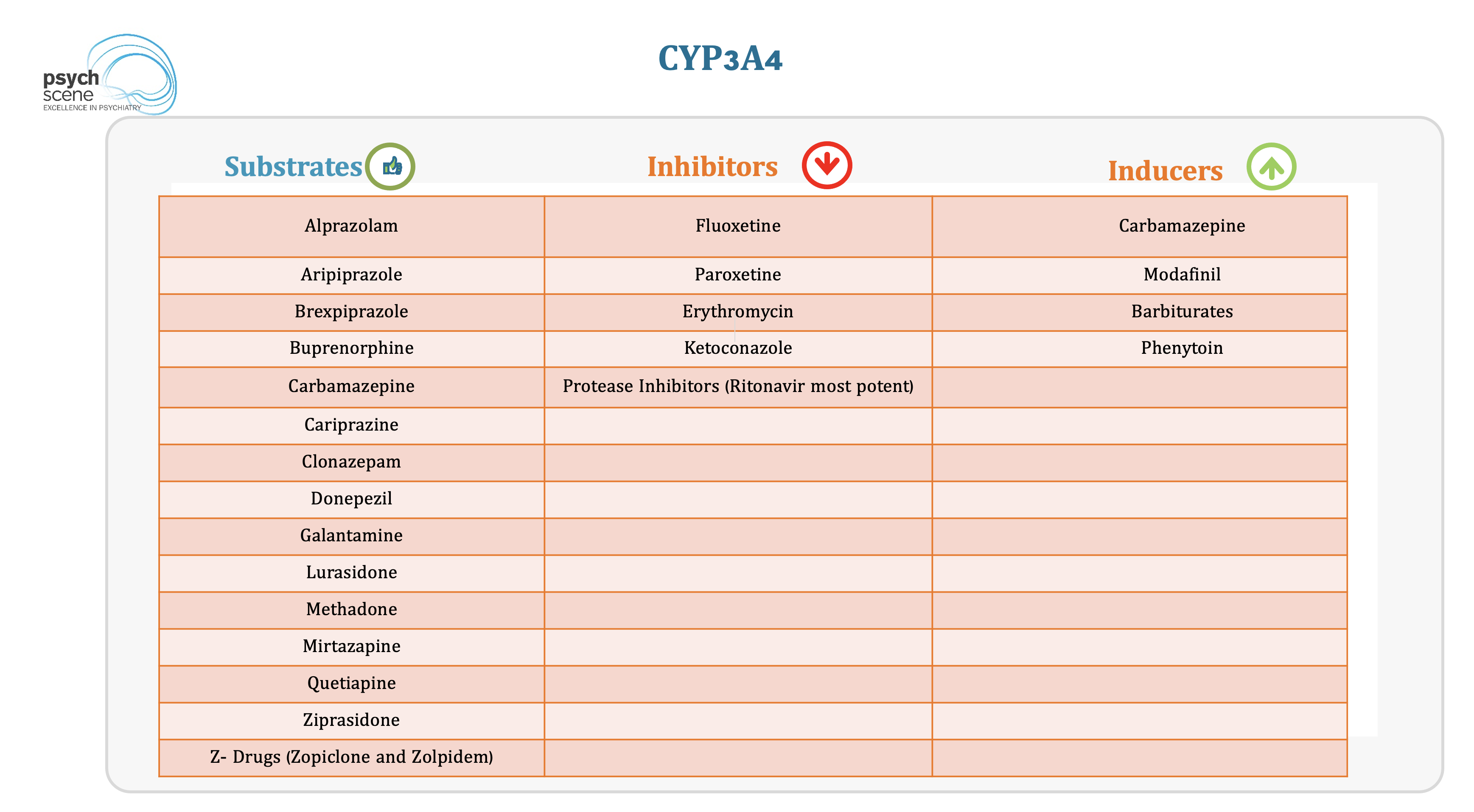 Through genome-wide association studies (GWAS), the contribution of common and rare genetic variants, as well as the integration of knowledge on epigenetic events, has provided substantial evidence of the relationship between genetic changes, their interaction with the environment, and a patient’s risk of developing a psychiatric disorder.

As such, there is a clear effort to complement the considerable progress in genetic linkage studies with the real-world application of diagnostic genetic testing to individualise drug prescriptions.

However, genetic biomarkers to guide treatment (pharmacogenetics) is much further along the translational utility path than for diagnosis.

However, although there is good evidence that genetic testing can inform clinical decision making, there has been some controversy as the evidence base evolves:

To answer these criticisms, the International Society of Psychiatric Genetics (ISPG), which was established in 1992, aims to promote and facilitate education and research in the genetics of psychiatric disorders. [ISPG 2019]

The committee recognises that the implementation of pharmacogenomics requires education and training and the development of approved guidelines.

In 2019, the ISPG updated their genetic testing statement in 2019, which provides guidance on how pharmacogenomic evidence and clinical genetic testing can or may be successfully used to screen and identify individuals at risk and guide treatment. [ISPG 2019]

As well as the promotion of educational programs for trainees and mental health professionals, the ISPG outlined the following:

The ISPG also state that familial risk counselling and consultation with a medical geneticist can prove useful. This is because their professional expertise can help interpret and understand the health implications associated with a genetic test result.

Furthermore, the ISPG rigorously state that genetic testing results should remain private and that patient autonomy should be respected regarding incidental or secondary findings.

In short, these guidelines recommend pharmacogenetic testing when there are difficulties with efficacy and tolerability with psychotropics. The FDA now also endorses the use of such guidance and has there  guidance based on medication filings upon initial registration with the FDA: Table of Pharmacogenomic Biomarkers in Drug Labeling | FDA

At this stage, HLA-B testing to gauge the risk of Steven Johnson Syndrome before initiating carbamazepine in patients of Asian ethnicity is the only mandated pharmacogenetic test, with other guidance reports considered optional – to augment prescribers’ decisions.

Importantly, all guidelines recommend that clinical acumen can over-ride pharmacogenetic reports given limitations in full knowledge of relevant variants at this stage of the field’s evolution.

Through the correlation of genotype with clinical phenotype, pharmacogenomic profiling aims to provide personalised therapy with improved efficacy and reduce adverse drug reactions.

Pharmacokinetic pharmacogenetic tests combing hepatic and blood-brain-barrier variants are showing the most promise for clinical utility.

These tools are designed to augment prescribers deliberations rather than replace them, with clinical acumen still central in decision making.

Pharmacogenomics in general practice: The time has come

Policy and Practice Review: A First Guideline on the Use of Pharmacogenetics in Clinical Psychiatric Practice

Personalised prescribing in psychiatry: Has pharmacogenomics delivered on its promise?

Singh, A. B. (2015). Improved antidepressant remission in major depression via a pharmacokinetic pathway polygene pharmacogenetic report. Clinical Psychopharmacology and Neuroscience, 13(2), 150.

Interactions between tamoxifen and antidepressants via cytochrome P450 2D6

Pharmacogenetics: from bench to byte—an update of guidelines

Pharmacogenomics in psychiatry: from therapeutic drug monitoring to genomic medicine.