Perimenopausal Depression – A Review of Diagnosis and Management

Perimenopausal depression is a serious mental health disorder that affects women in the transition to menopause.

Symptoms can include low mood, sleep disturbances, and changes in appetite. This condition can be especially difficult to diagnose due to the overlap of symptoms with other conditions. However, with proper diagnosis and treatment, perimenopausal depression can be effectively managed. This review will discuss the importance of recognising and treating perimenopausal depression, examining the diagnostic criteria and various treatments available.

Additionally, it will provide an overview of the current literature on this topic and discuss the implications for future research.

The WHO defines perimenopause:

The term perimenopause should include the period immediately before the menopause (when the endocrinological, biological and clinical features of approaching menopause commence) and the first year after menopause. [WHO Scientific Group 1996]

The WHO uses menopausal transition to include only perimenopause before the final menstrual period.

The diagnosis of perimenopausal depression is therefore often made retrospectively. There are no definitive endocrine markers of perimenopause as hormonal changes are highly variable. Low Estradiol levels, however, characterise Postmenopause.

To complicate matters, the physical symptoms of menopause often present much later (up to five years) than the psychological symptoms.

Recent literature suggests that perimenopausal depression is a unique subtype of depression, with characteristic symptoms, aetiology, and course distinct from other depression subtypes.

In 2015 the Board of Trustees for the North American Menopause Society (NAMS) and the Women and Mood Disorders Taskforce of the National Network of Depression Centres developed a new clinical practice guideline for assessing and managing perimenopausal depression. [Maki et al., 2018]

In addition the recommendations by Prof Jayashri Kulkarni are included. [Kulkarni, 2018]

Perimenopause is a vulnerable period for developing depression, and the risk is elevated even with no prior history of major depressive disorder. [Lin et al., 2013]

Most published studies on the relationship between perimenopausal symptoms and depression included women between the ages of 40 and 60 from various socio-cultural and economic backgrounds. [Maki et al., 2018]

Women experiencing spontaneous or iatrogenic menopause before 45 years and particularly before 40 years are at higher risk for cardiovascular disease and osteoporosis. They may be at increased risk of affective disorders and dementia. [Baber et al., 2016]

Studies were inconclusive about whether there is an increased risk in women who progress naturally through menopause instead of those with depression who reach it early.

Elevated depression symptoms were reported among 28% to 47% of women during early menopause, and the odds of experiencing elevated depressive symptoms in this phase were higher than during the premenopausal stage. [Bromberger et al., 2004].

Women who have had a hysterectomy with or without oophorectomy are at increased risk of depression and those with primary ovary insufficiency [Darwish et al., 2014]. 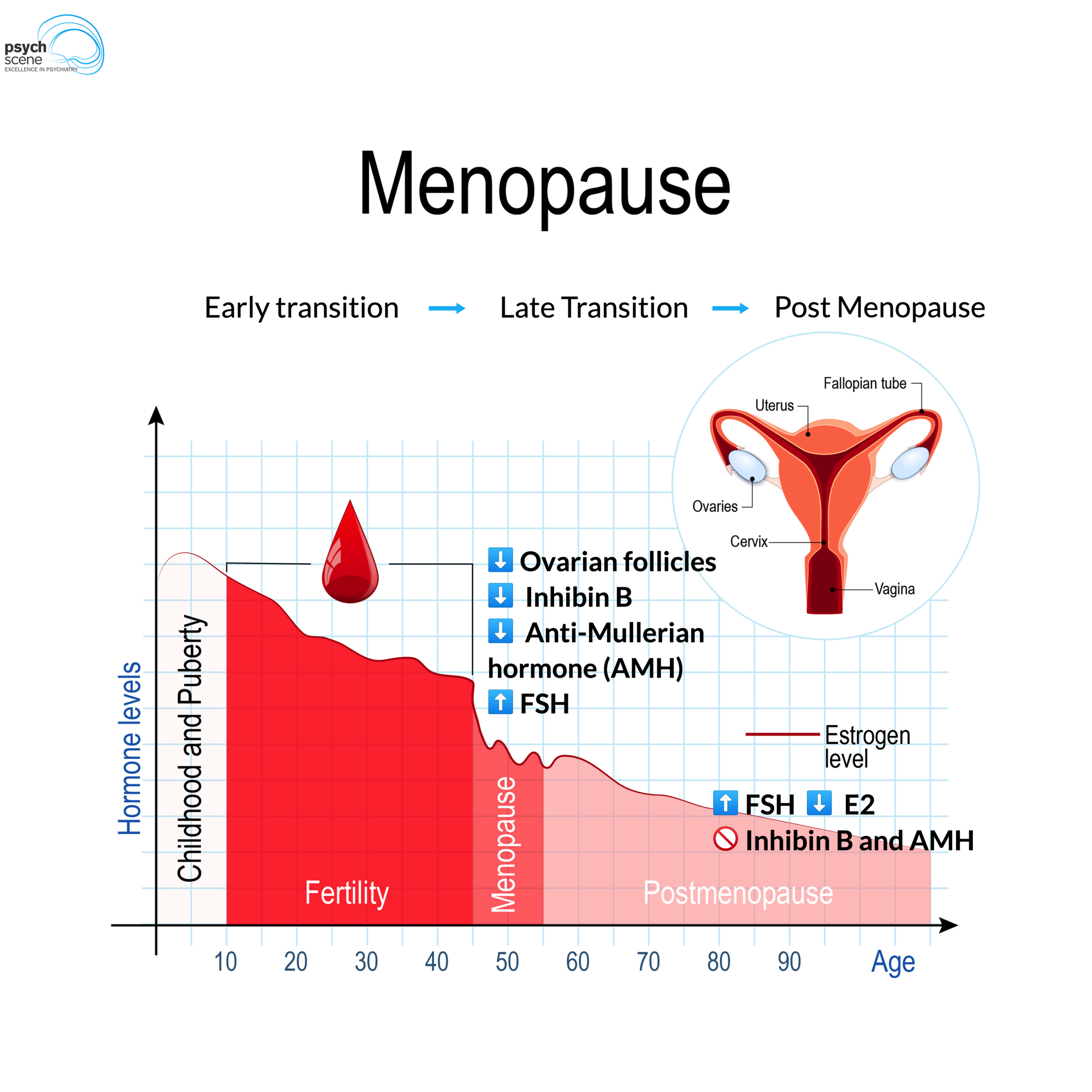 The menopausal transition is characterised by: 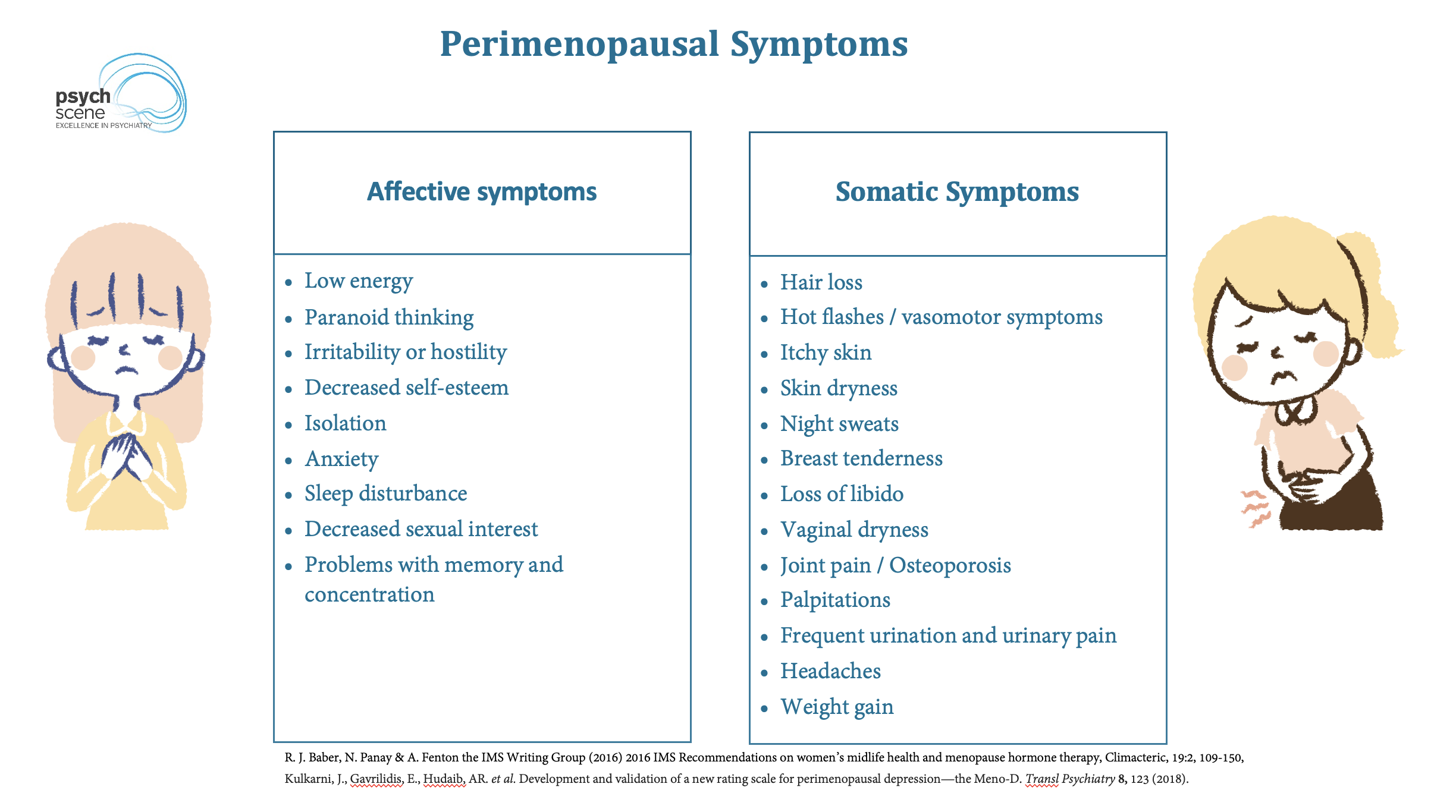 Clinicians should consider these issues carefully when trying to differentiate symptoms from one another.

ASSESSMENT AND DIAGNOSIS OF PERIMENOPAUSAL DEPRESSION

Differential diagnoses in perimenopausal depression include:

Women with past moderate depressive episodes (not always hormone-related) and those with severe depressive symptoms and/or suicidal ideation should always be assessed for a mood disorder.

The menopausal phase should be identified, and valid assessment tools should be used to identify psychiatric symptoms from those specific to menopause. [Maki et al., 2018]

Several validated tools such as the PHQ-9 can screen for depression.

Women experiencing perimenopausal depression complain about physical symptoms more than cognitive symptoms, which are not typically included in previous scales assessing for major depressive disorder leading to an underdiagnosis or missed diagnosis.

These physical aspects are captured as part of MENO-D.

Clinicians may also use quality of life questionnaires to clarify symptom types.

ANTIDEPRESSANTS FOR THE TREATMENT OF PERIMENOPAUSAL DEPRESSION

Menopause hormone treatment (MHT) should always be implemented as part of an overall strategy, with lifestyle recommendations regarding diet, exercise, smoking and alcohol to improve general health status. 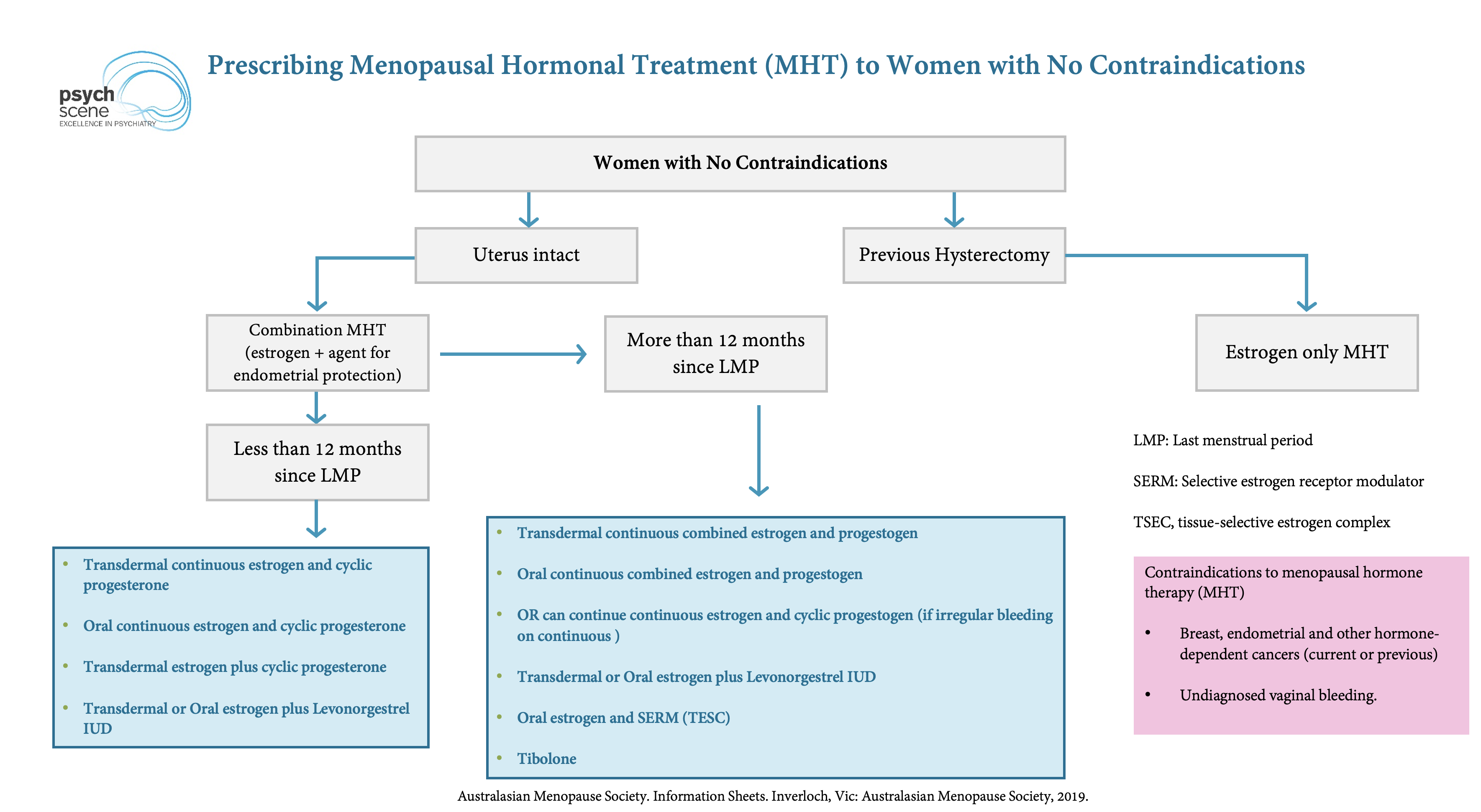 Co-occurring psychiatric and menopause symptoms should be assessed using valid, evidence-based screening tools, and psychosocial factors common to midlife women should be considered.

Proven first-line treatment options for depression include antidepressants and psychotherapy.

Although estrogen therapy is not approved to treat perimenopausal depression, evidence shows that it has antidepressant effects in perimenopausal women, particularly those with coexistent vasomotor symptoms.

Most women with perimenopausal depression respond to treatment. It is important to recognise the special symptoms of perimenopausal depression as well as the serious nature of this depression. Clinicians need to provide a tailored management approach for these women. It is not appropriate to deem this type of depression as minor or presume that, once the hormonal fluctuations settle, the depression will improve. The process of menopause can take many years, during which the patient’s quality of life and that of her family, may deteriorate irreparably. Tragically, suicide in middle-aged women is becoming a more common occurrence. [Kulkarni, 2018]

Research on the menopause in the 1990’s. A report of the WHO Scientific Group.

Risk for new onset of depression during the menopausal transition: the Harvard study of moods and cycles

Guidelines for the Evaluation and Treatmentof Perimenopausal Depression:Summary and Recommendations

Perimenopause and incidence of depression in midlife women: a population-based study in Taiwan

What factors determine whether a woman becomes depressed during the perimenopause?

Racial/ethnic differences in the prevalence of depressive symptoms among middle-aged women: The Study of Women's Health Across the Nation (SWAN)

Psychological outcomes after hysterectomy for benign conditions: a systematic review and meta-analysis

Perimenopause: The Complex Endocrinology of the Menopausal Transition

A review of hormonal changes during the menopausal transition: focus on findings from the Melbourne Women's Midlife Health Project

Symptoms in the menopausal transition: hormone and behavioral correlates

Depression and Menopause: Current Knowledge and Clinical Recommendations for a Critical Window

Sleep difficulty in women at midlife: a community survey of sleep and the menopausal transition

Depression is associated with worse objectively and subjectively measured sleep, but not more frequent awakenings, in women with vasomotor symptoms

Hot flushes and night sweats symptom profiles over a 17-year period in mid-aged women: The role of hysterectomy with ovarian conservation

Mood disorders in midlife women: understanding the critical window and its clinical implications

Moderators of the relationship between depression and cardiovascular disorders: a systematic review

The epidemiology of sexual dysfunctions

Association between urinary incontinence and climacteric symptoms in postmenopausal women

Empty nest or revolving door? A prospective study of women's quality of life in midlife during the phase of children leaving and re-entering the home

Dennerstein L, Dudley E, Guthrie J. (2002). Empty nest or revolving door? A prospective study of women’s quality of life in midlife during the phase of children leaving and re-entering the home. Psychol Med, 32(3):545-50.

A menopause-specific quality of life questionnaire: development and psychometric properties

The Utian Quality of Life (UQOL) Scale: development and validation of an instrument to quantify quality of life through and beyond menopause

Utian  WH, Janata JW, Kingsberg SA, Schluchter M, Hamilton JC. (2002). The Utian  Quality of Life (UQOL) Scale: development and validation of an instrument to quantify quality of life through and beyond menopause. Menopause, 9:402–410.

Antidepressants during and after Menopausal Transition: A Systematic Review and Meta-Analysis

Wu, et al,  (2020). Antidepressants during and after Menopausal Transition: A Systematic Review and Meta-Analysis. Scientific reports, 10(1), 8026.

Perimenopause: From Research to Practice

Effects of Hormone Therapy on Cognition and Mood in Recently Postmenopausal Women: Findings from the Randomized, Controlled KEEPS–Cognitive and Affective Study

Efficacy of estradiol for the treatment of depressive disorders in perimenopausal women: a double-blind, randomized, placebo-controlled trial

Progestogens as a component of menopausal hormone therapy: the right molecule makes the difference.

Bazedoxifene/conjugated estrogens combination for the treatment of the vasomotor symptoms associated with menopause and for prevention of osteoporosis in postmenopausal women.

Palacios S, Mejía Ríos A. Bazedoxifene/conjugated estrogens combination for the treatment of the vasomotor symptoms associated with menopause and for prevention of osteoporosis in postmenopausal women. Drugs Today (Barc). 2015 Feb;51(2):107-16.

Efficacy of Transdermal Estradiol and Micronized Progesterone in the Prevention of Depressive Symptoms in the Menopause Transition: A Randomized Clinical Trial

Cognitive-behavioral, behavioral, and mindfulness-based therapies for menopausal depression: A review