Paliperidone palmitate is an atypical long-acting injectable antipsychotic (LAIA) approved for acute and maintenance therapy of schizophrenia and schizoaffective disorder. Paliperidone palmitate comes as an aqueous suspension of nanocrystals that are 10 times smaller than standard drug powders and therefore have an increased drug-solution surface area.

Paliperidone palmitate is a prodrug of paliperidone (a benzisoxazole derivative), which is also the major active metabolite of risperidone. The addition of a palmitoyl ester results in very low water solubility, which means it has extended-release properties and therefore can be dosed as a long-acting injection. [Hough et al. 2009]

Due to the extremely low water solubility, the 1 month, 3-month, and 6-month formulation of paliperidone palmitate dissolves slowly after intramuscular injection before being hydrolysed to paliperidone and absorbed into the systemic circulation.

MECHANISMS OF ACTION OF PALIPERIDONE

Paliperidone’s mechanism of action is mediated through the antagonism of central dopamine D2 receptors and serotonin 5-HT2A receptors. [Yang and Plosker 2007]

There is no first-pass metabolism as paliperidone palmitate is administered by intramuscular injection (either the deltoid muscle or the gluteal area). [Hough et al. 2009] 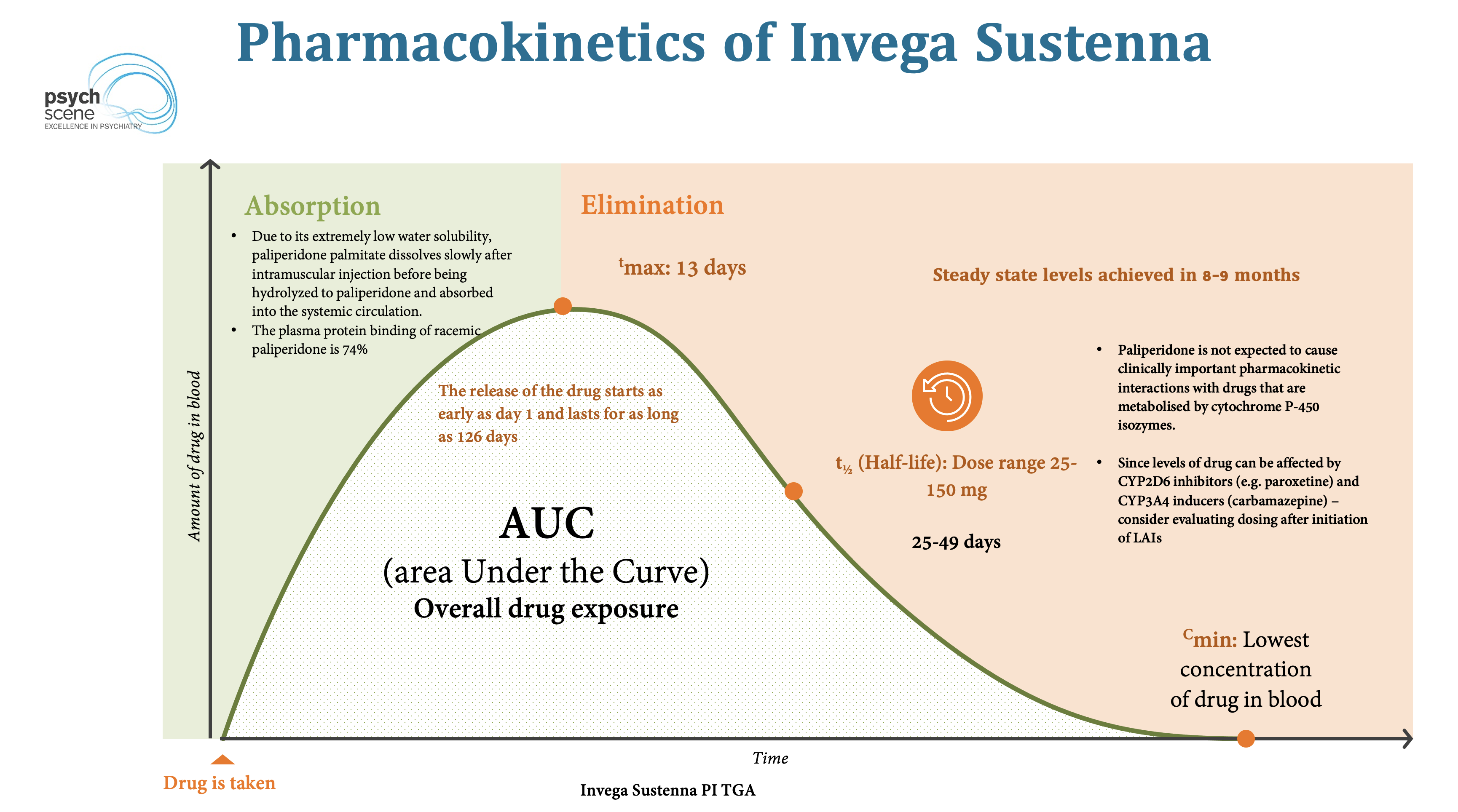 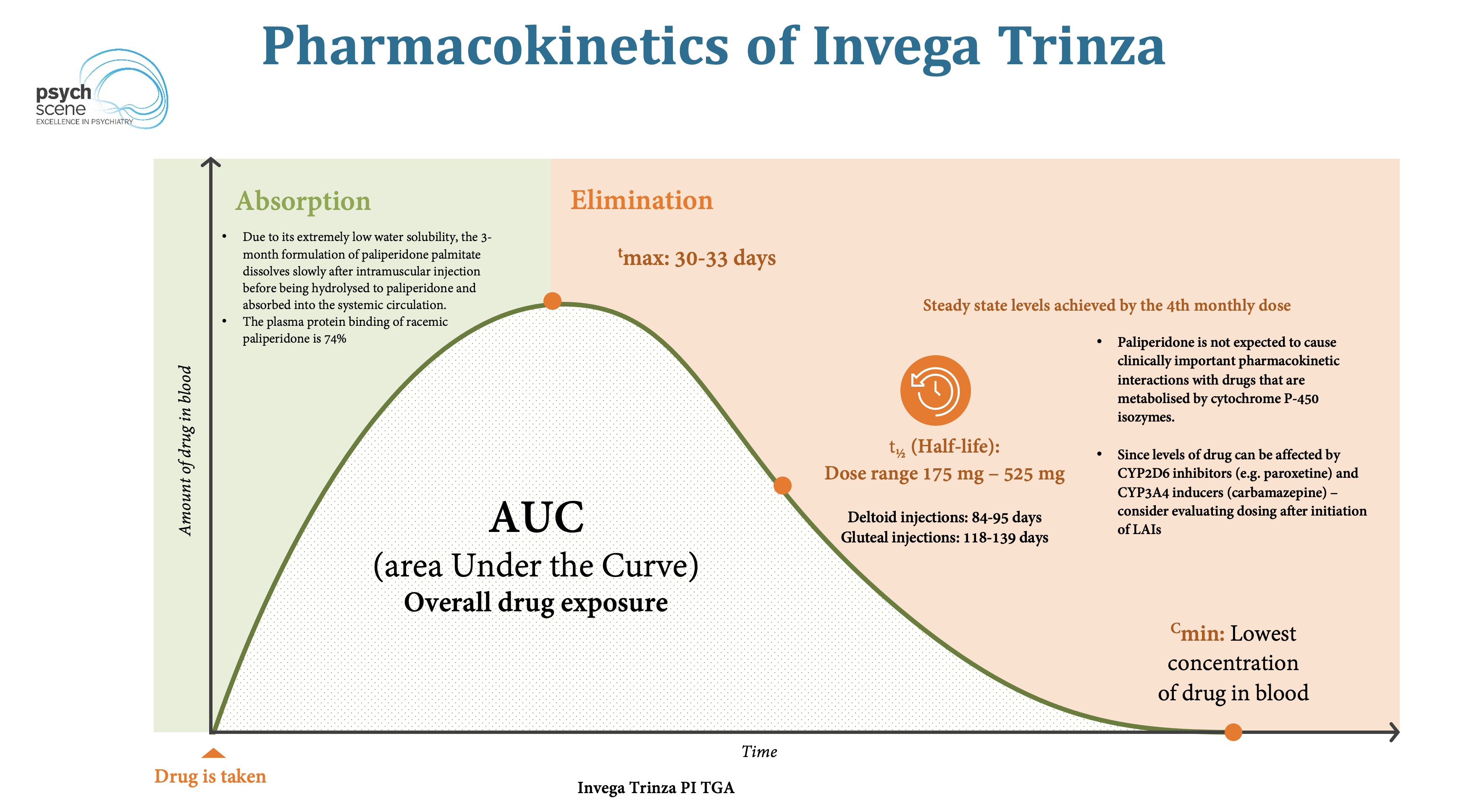 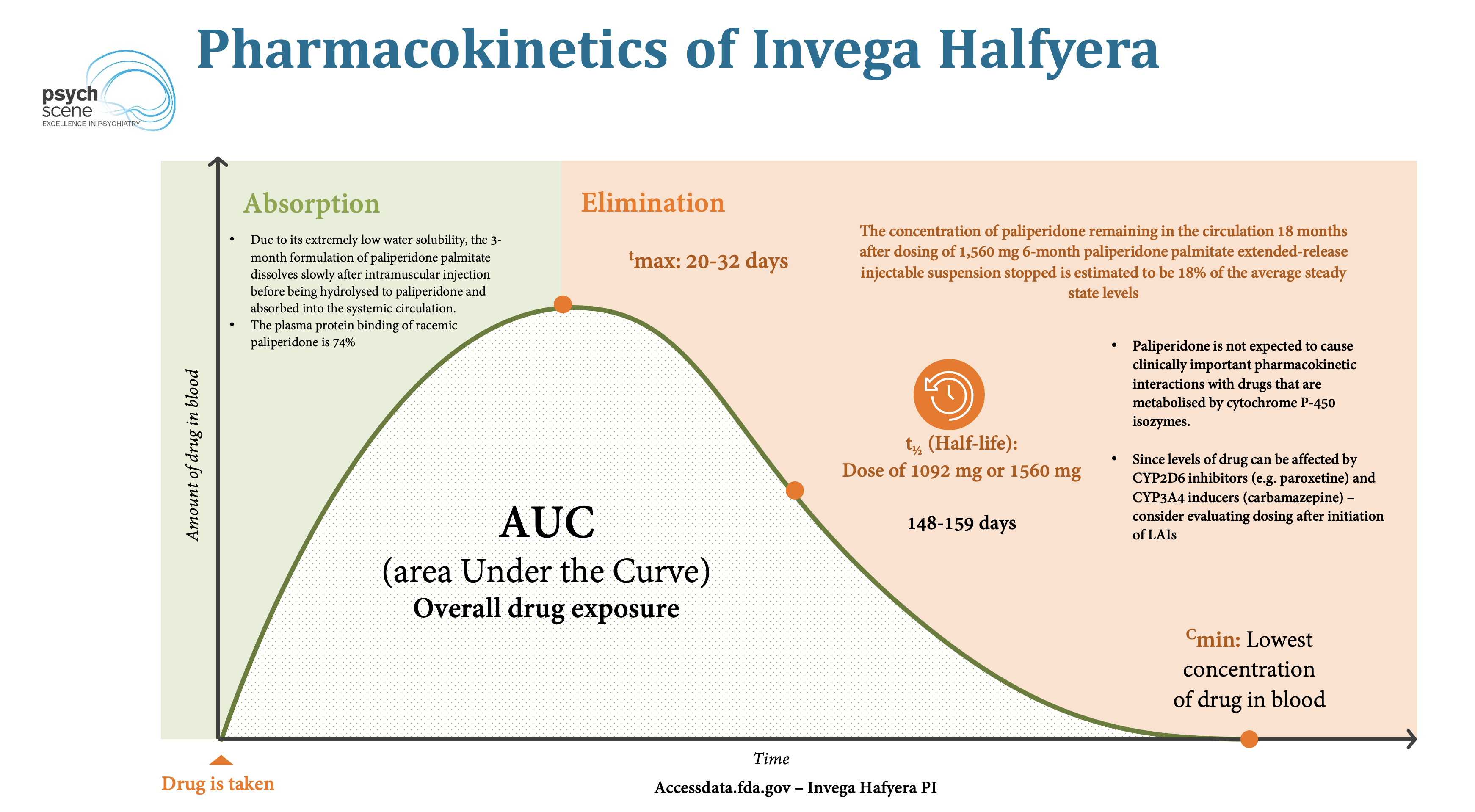 Recommended initiation of Invega Sustenna is with a dose of 150 mg on treatment day 1 and 100 mg one week later (day 8), both administered in the deltoid muscle. 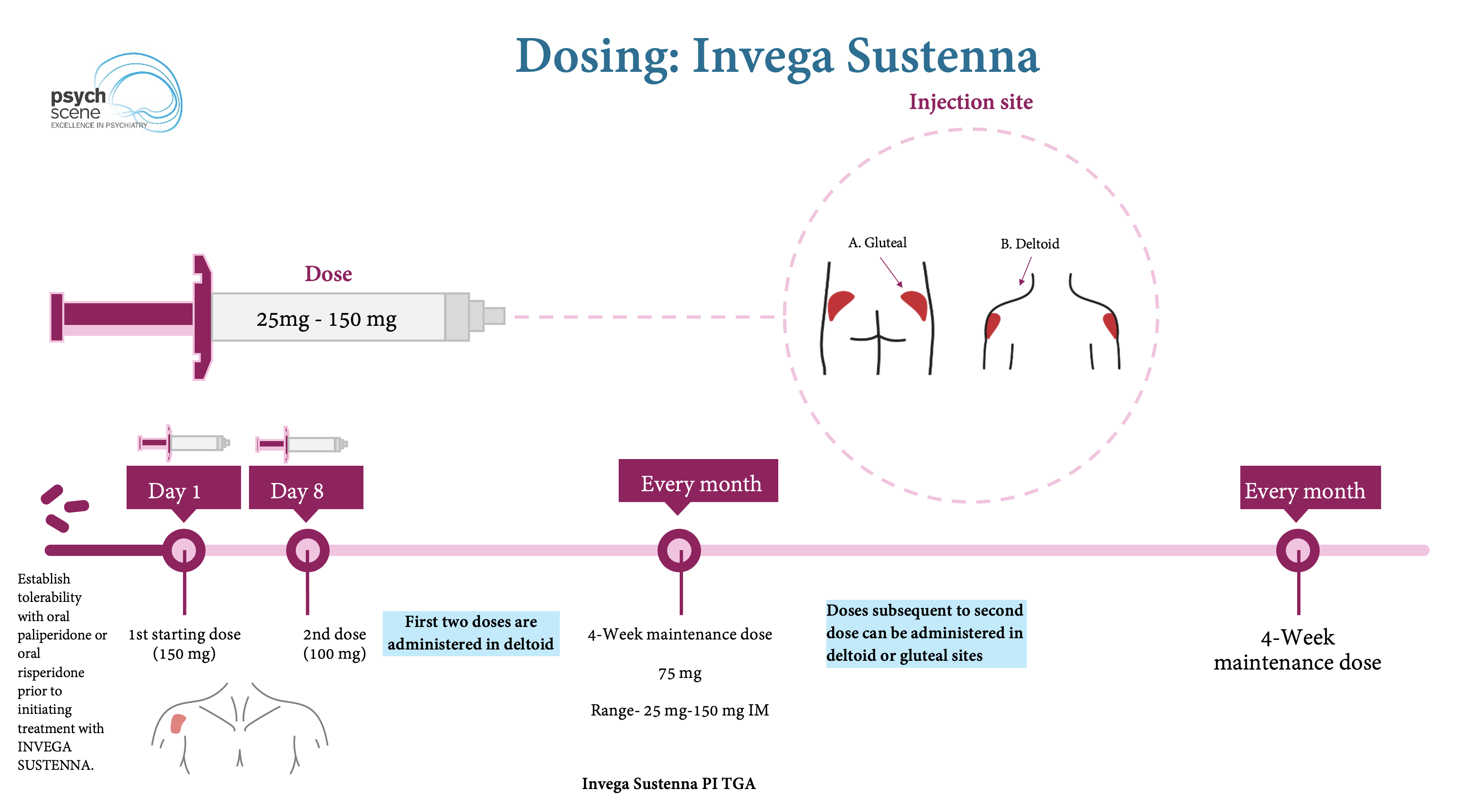 The recommended monthly maintenance dose is 75 mg; some patients may benefit from lower or higher doses within the recommended range of 25 to 150 mg based on individual patient tolerability and/or efficacy.

Switching strategies (These images are from the company website – (https://www.invegasustennahcp.com/dosing/transitioning) 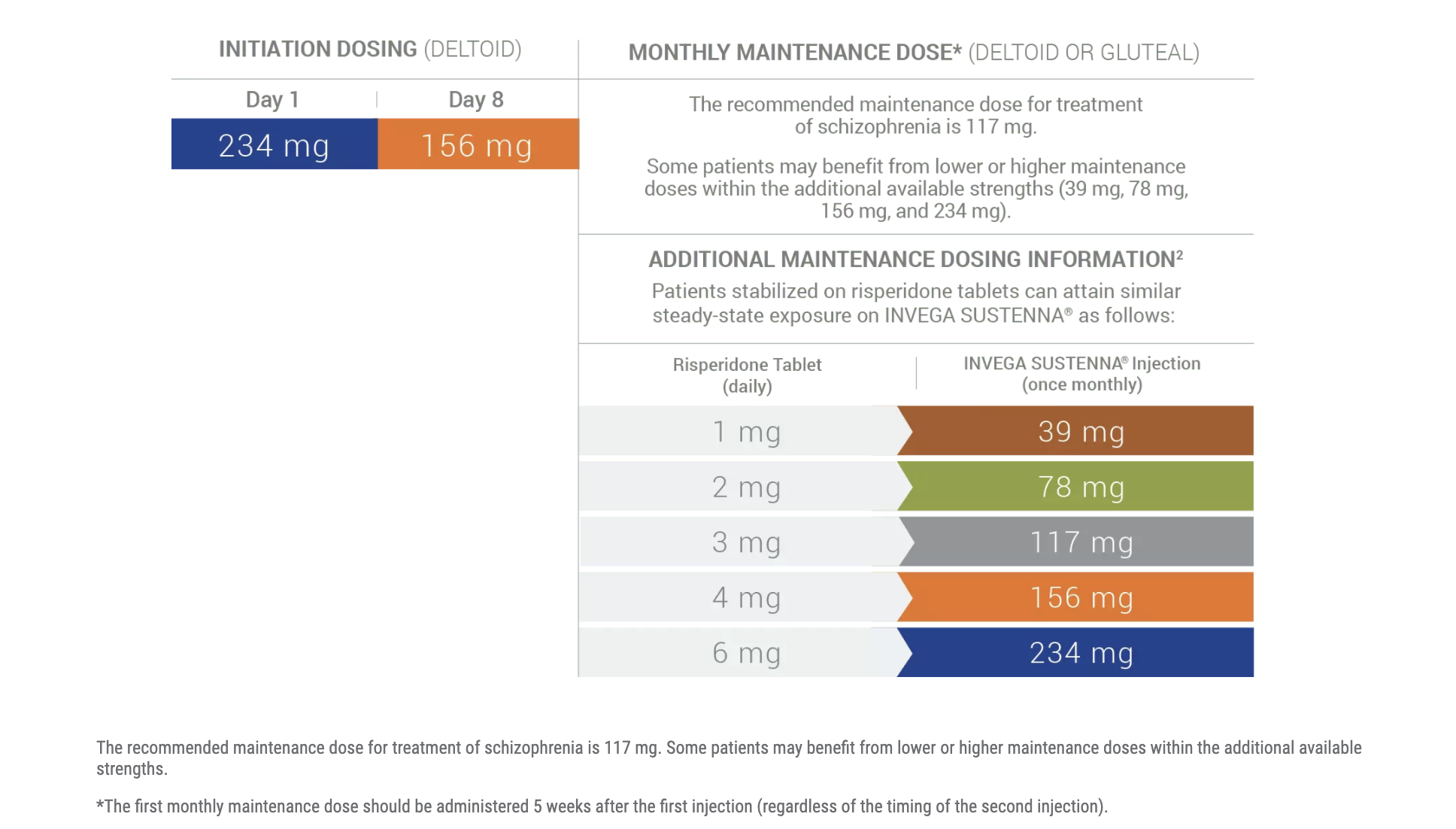 Transitioning from other LAIs to Invega Sustenna 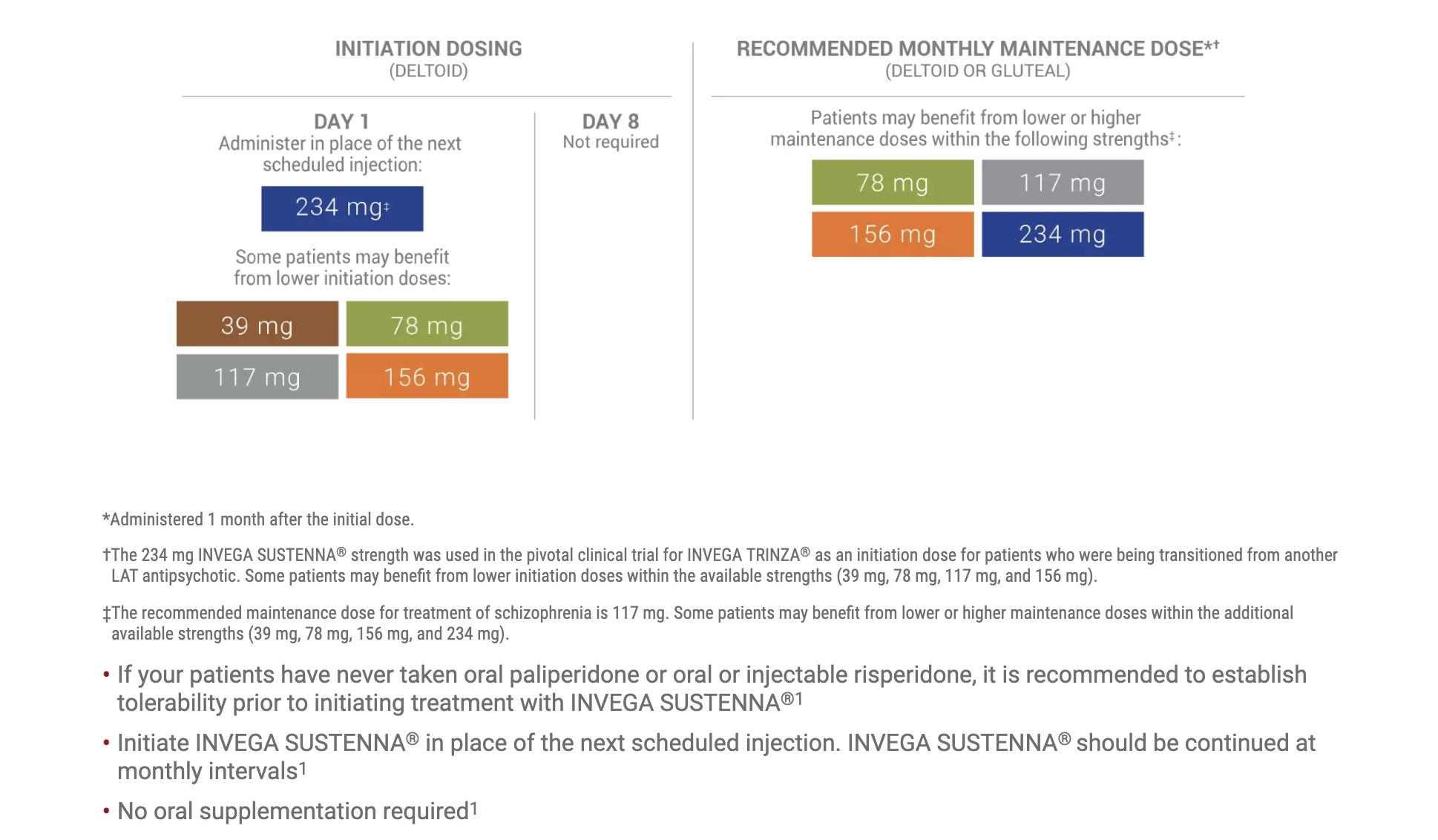 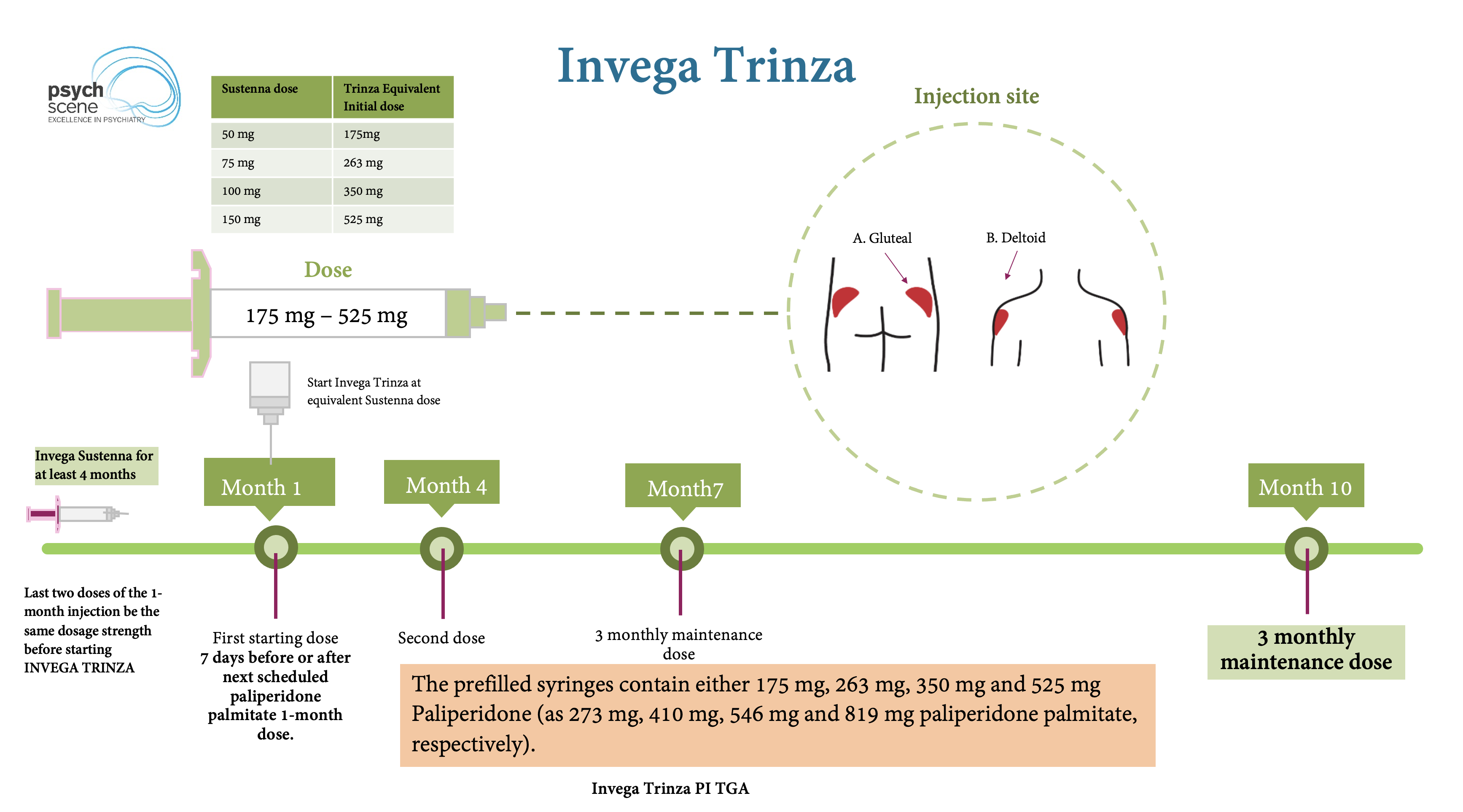 Initiate Invega Hafyera only after adequate treatment has been established with either:

Invega Trinza (PP3M) for at least one three-month injection cycle. 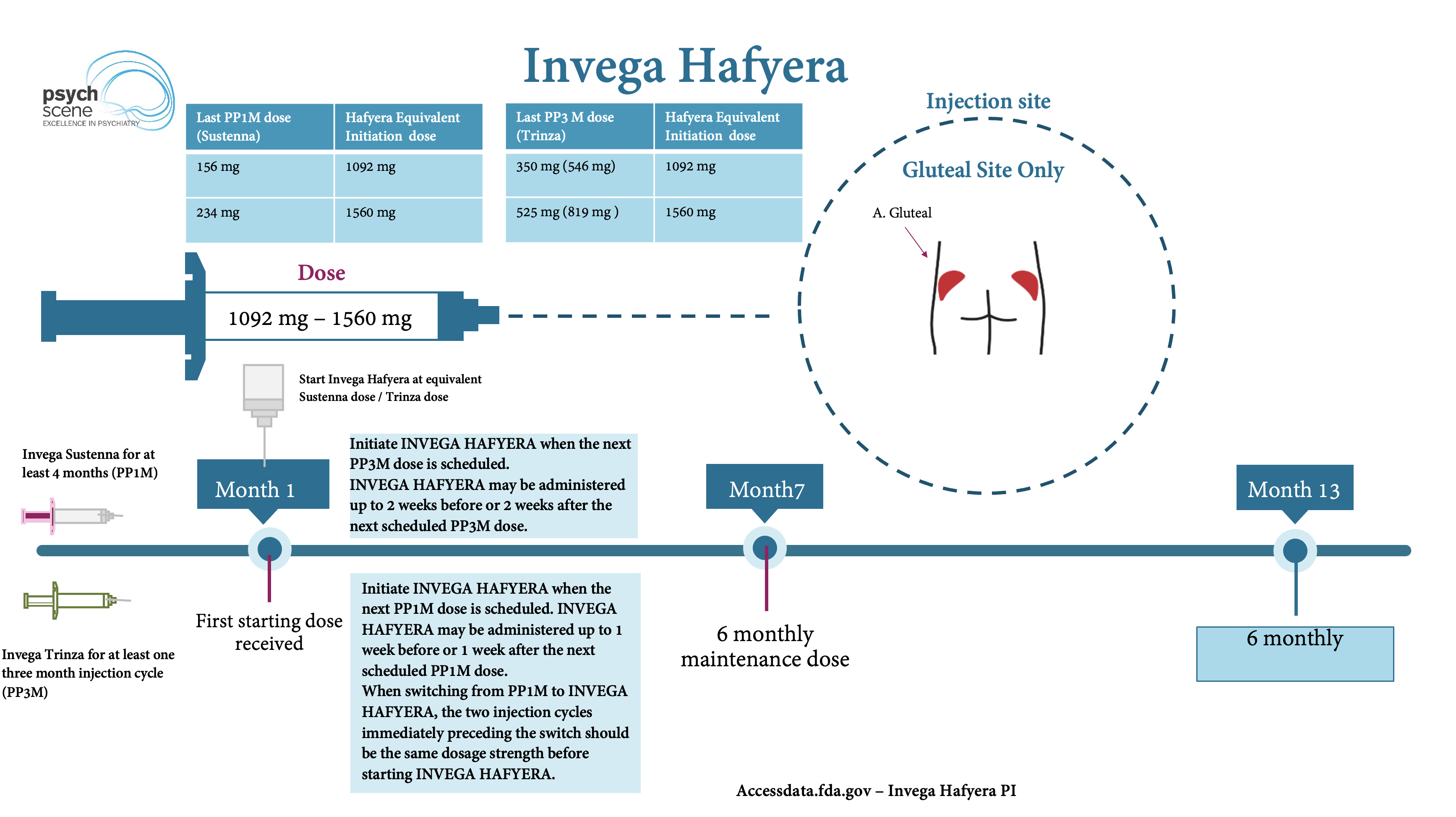 Initiate Invega Hafyera when the next PP3M dose is scheduled.

If the target date for the second Invega Sustenna injection (1wk ± 4 days) is missed, the recommended reinitiation depends on the length of time which has elapsed since the patient’s first injection.

For patients stabilised with doses of 25 to 100 mg:

For patients stabilised with 150 mg:

However, patients may be given the injection up to 2 weeks before or after the 3-month time point on exceptional occasions.

Missed dose> 3½ Months up to 4 Months

Missed dose> 4 Months up to 9 Months 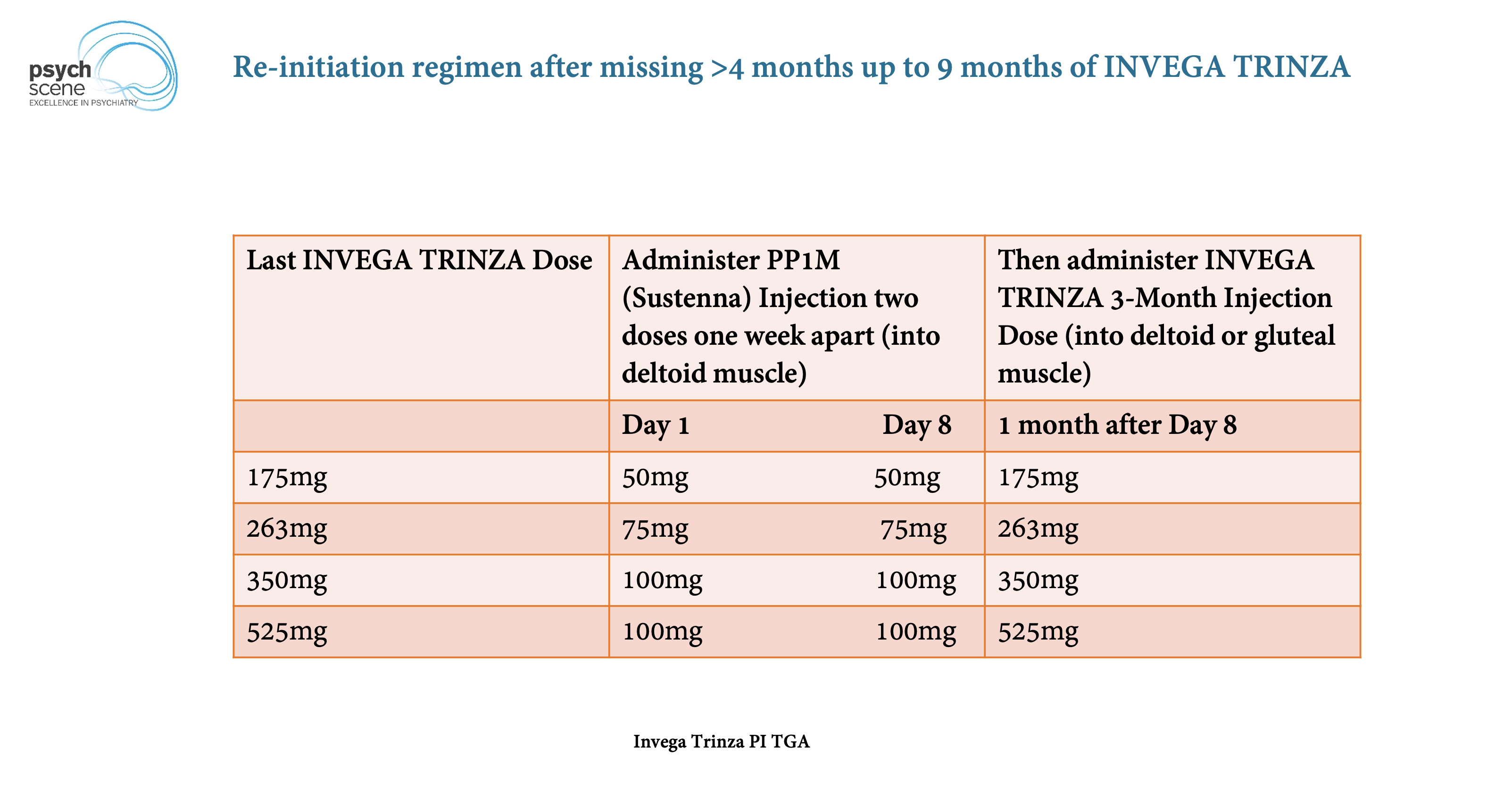 To avoid a missed dose, patients may be given the injection up to 2 weeks before or 3 weeks after the scheduled 6-month dose.

Missed dose more than 6 Months and 3 Weeks, up to but Less than 8 Months Since Last Dose:

Missed Dose 8 Months Up to and including 11 Months Since Last Dose:

The most common side effects of paliperidone palmitate were injection site reactions, somnolence/sedation, dizziness, akathisia, and extrapyramidal disorder (incidence ≥5%).

Other notable adverse reactions reported in clinical trials include:

Overall, both 1-month and 3-month formulations of PDP are safe and effective in treating schizophrenia and schizoaffective disorder. They may be most effective in patients with prior failed treatment of oral antipsychotics or other LAIAs, patients with a history of medication noncompliance, or patients with an individual preference for less frequent dosing. [Morris et al., 2017]

PP3M was better at preventing relapse compared to oral paliperidone. 50% of patients withdrawn from oral paliperidone, PP1M, or PP3M remained relapse-free for approximately 2, 6, and 13 months, respectively.

Compared to PP1M, PP3M is just as safe and effective and has the added advantage of increased adherence to a longer dose interval, decreasing the risk of relapse. [Edinoff et al., 2021]

Invega Hafyera was recently approved after being studied in a randomised, double-blind, non-inferiority global Phase 3 study of 702 adults (ages 18–70) with schizophrenia, designed to demonstrate that injection cycles consisting of a single administration of Invega Hafyera (PP6M) (700 or 1000 mg) are not less effective than two sequentially administered injections of PP3M (350 or 525 mg) for the prevention of relapse in subjects with schizophrenia previously stabilised on corresponding doses of PP1M (100 or 150 mg) or PP3M (350 or 525 mg). [The Route 6 Study].

Paliperidone is the pharmacologically active metabolite of risperidone, and the intramuscular LAI formulation provides several advantages over oral therapy.

At present, there are 1-, 3-, and 6-month formulations approved to treat schizophrenia and schizoaffective disorder in adults.

Practical guidelines on the use of paliperidone palmitate in schizophrenia

Population pharmacokinetics of intramuscular paliperidone palmitate in patients with schizophrenia: a novel once-monthly, long-acting formulation of an atypical antipsychotic

Paliperidone palmitate, a potential long-acting treatment for patients with schizophrenia. Results of a randomized, double-blind, placebo-controlled efficacy and safety study

Paliperidone palmitate - review of the efficacy, safety and cost of a new second-generation depot antipsychotic medication

A randomized, placebo-controlled study to assess the efficacy and safety of 3 doses of paliperidone palmitate in adults with acutely exacerbated schizophrenia

Efficacy, safety, and impact on hospitalizations of paliperidone palmitate in recent-onset schizophrenia

Efficacy and Safety of the 3-Month Formulation of Paliperidone Palmitate vs Placebo for Relapse Prevention of Schizophrenia: A Randomized Clinical Trial

Long-Acting Injectable Paliperidone Palmitate: A Review of Efficacy and Safety

Paliperidone 3-Month Injection for Treatment of Schizophrenia: A Narrative Review.

Effects of long-acting injectable paliperidone palmitate on clinical and functional outcomes in patients with schizophrenia based on illness duration.