The hallmark of obsessive-compulsive disorder (OCD) is the presence of obsessions and compulsions. It has a bimodal incidence, with peaks occurring in late childhood/early adolescence and again in early adulthood (20-29).

While 21 to 38 % of individuals in the population endorse obsessions and/or compulsions, only a small minority meet the criteria for a clinical OCD diagnosis. [Bralten et al, 2020]

The lifetime prevalence of OCD is believed to be between 1% and 3%, and patients can experience chronic or episodic OCD symptoms throughout their lifetime. OCD is a time-consuming and distressing psychiatric disorder that has higher disability-adjusted years than Parkinson’s disease and multiple sclerosis combined, making OCD one of the top 10 most disabling medical conditions. [WHO]

OCD is believed to diminish the quality of life of the patient, similar in extent to those individuals with schizophrenia. [Subramaniam M et al, 2013] 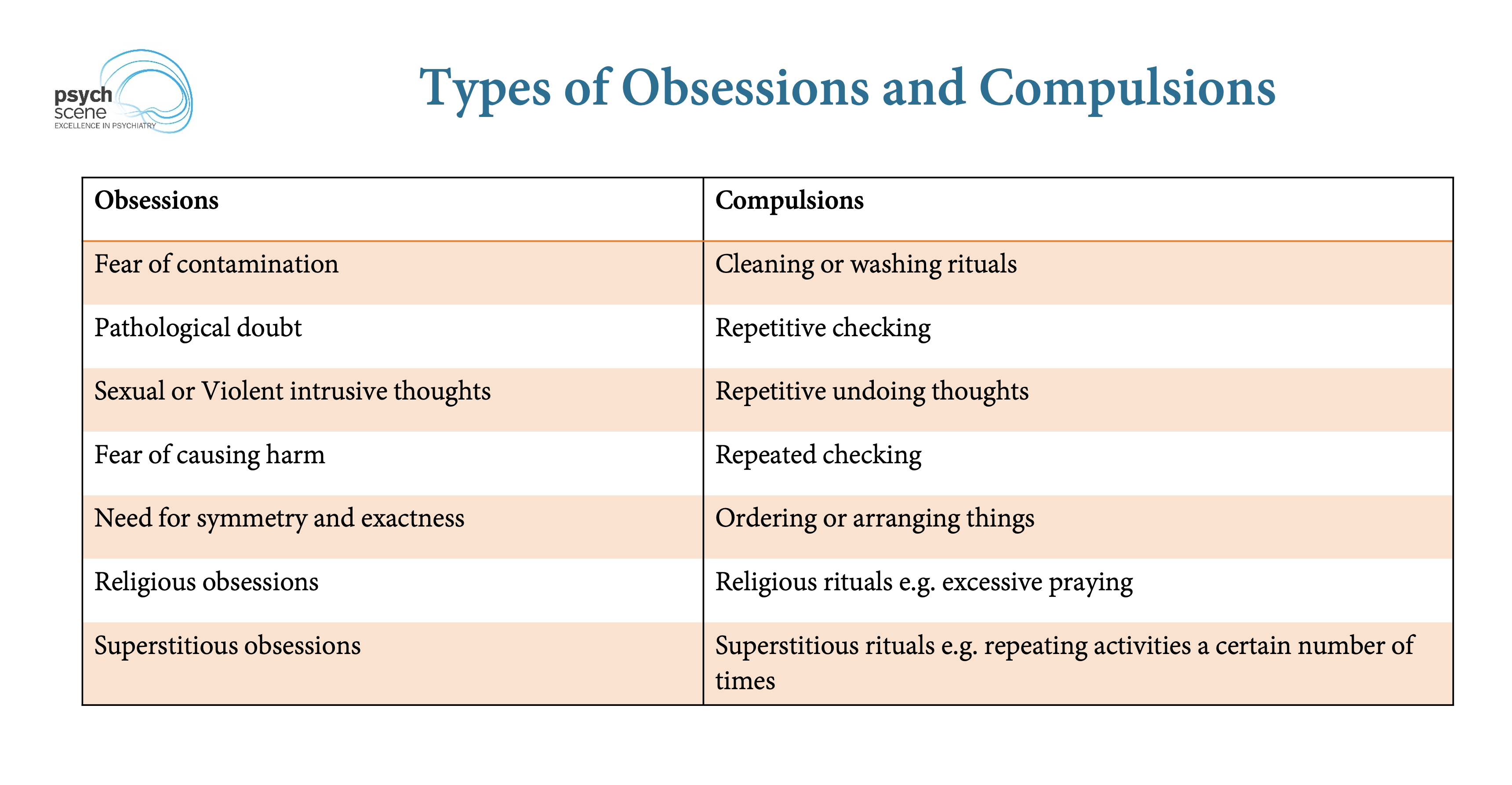 Based on a factor analysis of symptoms, a five-factor model of symptom dimensions in OCD has been proposed. [Stein et al, 2019] 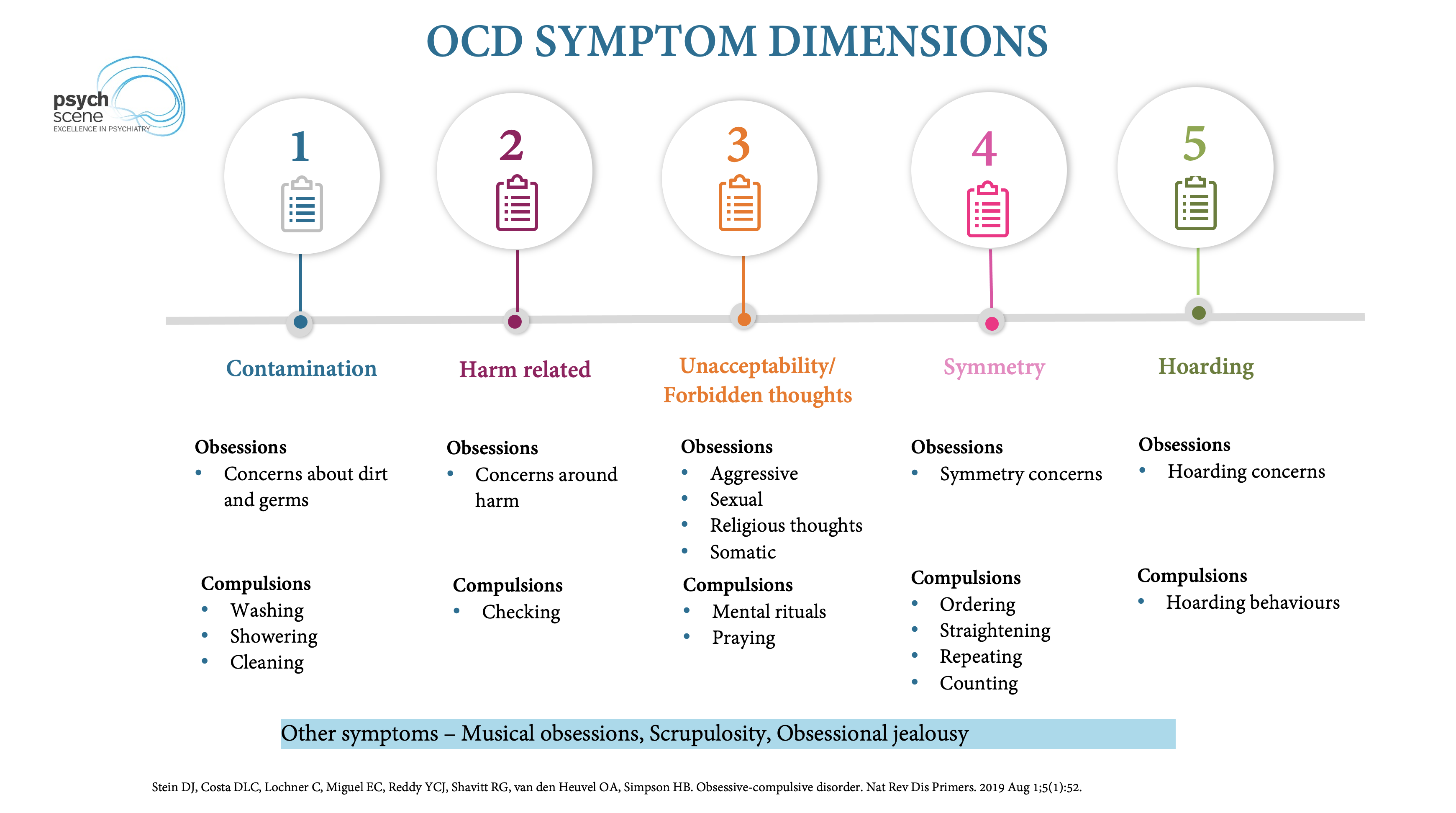 However, utilising the Y-BOCS screening tool requires adequately trained medical staff to accurately assess the presence and severity of 64 unique obsessions and compulsions.

There are other screening tools that, although not as well validated, are still as reliable and sensitive. These include the obsessive-compulsive inventory short version (OCI-SV), which only takes 5 minutes to complete and has 18 items that are scored based on the degree of distress associated.

There is also, the Florida Obsessive-Compulsive Inventory, which has a 20-item checklist on a 5-choice scaling system. 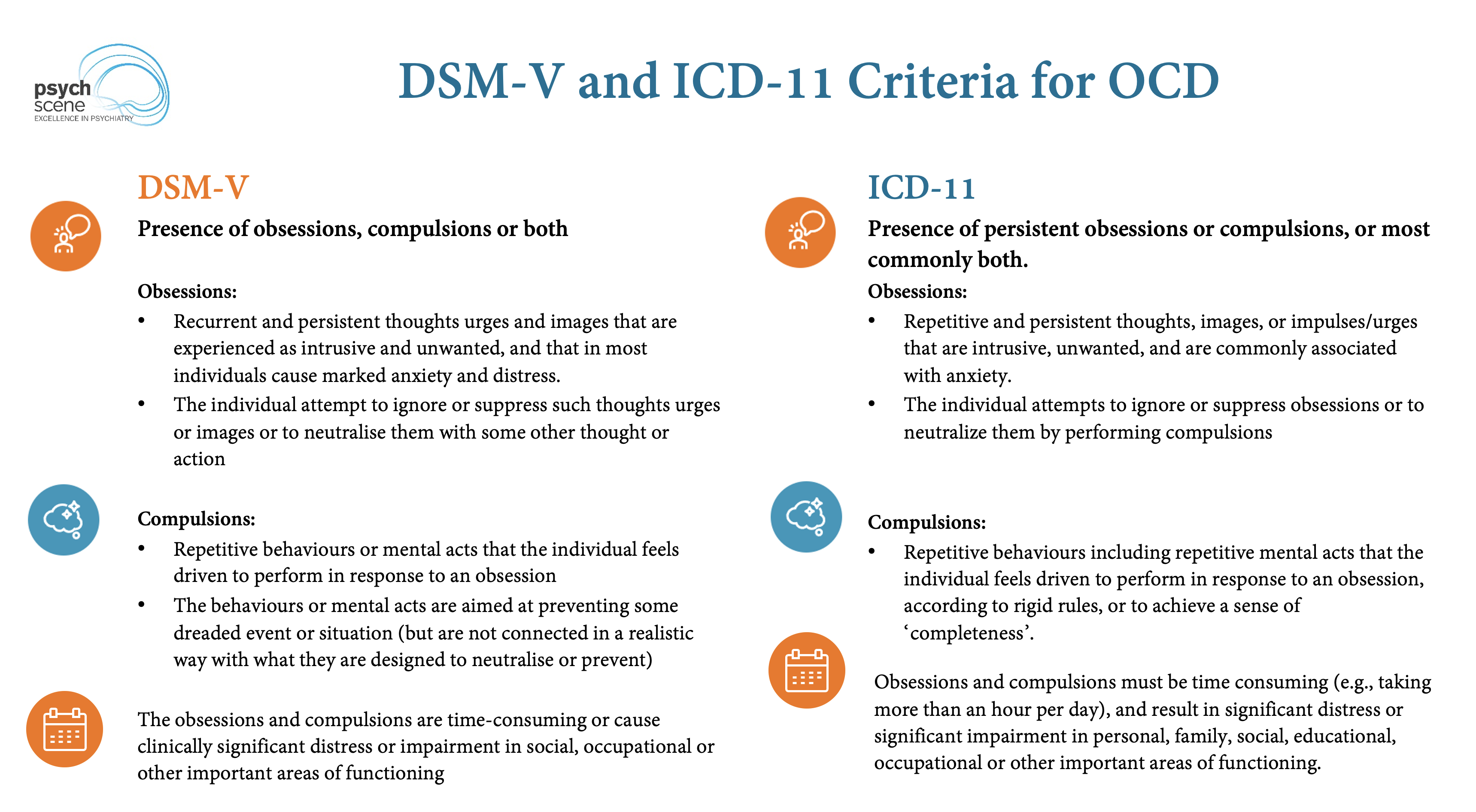 Read the diagnostic interviewing for OCD.

An OCD diagnosis is based on clinical assessments of obsessive thoughts or compulsive behaviours that last more than one hour per day and are not the result of a medical condition or substance abuse. Patients also do not have to show both obsessive and compulsive traits to be diagnosed as suffering from OCD.

The Diagnostic and Statistical Manual of Mental Disorders (5th edition) specifies OCD symptoms as clinically separate from delusions or persistent negative thoughts that may be associated with other psychiatric disorders such as depression or generalised anxiety.

Three insight specifiers are included in the DSM-5:

The DSM-5 includes a tic specifier which is relevant due to the close association between OCD and Tourette syndrome.

The related disorders included are: 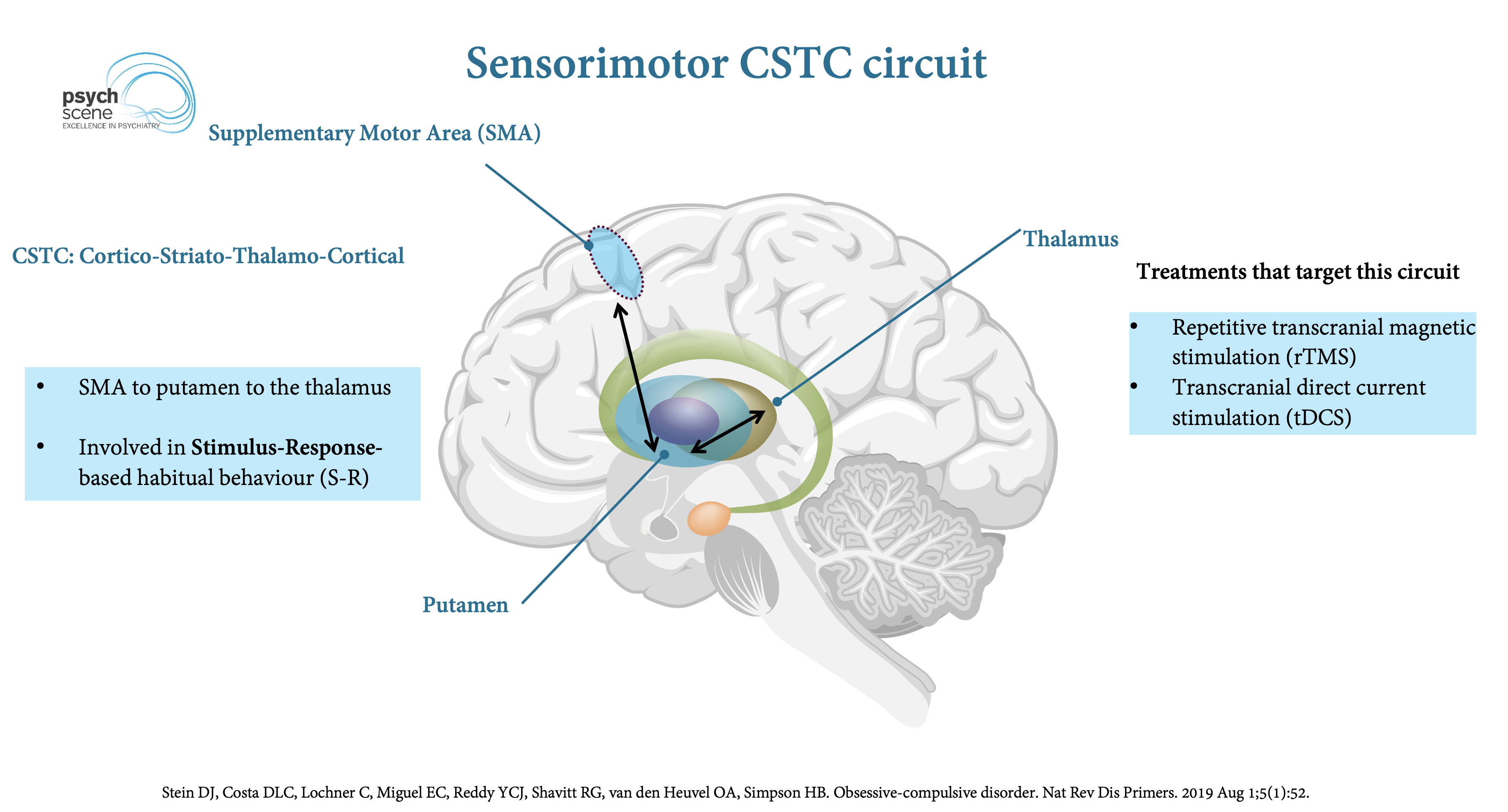 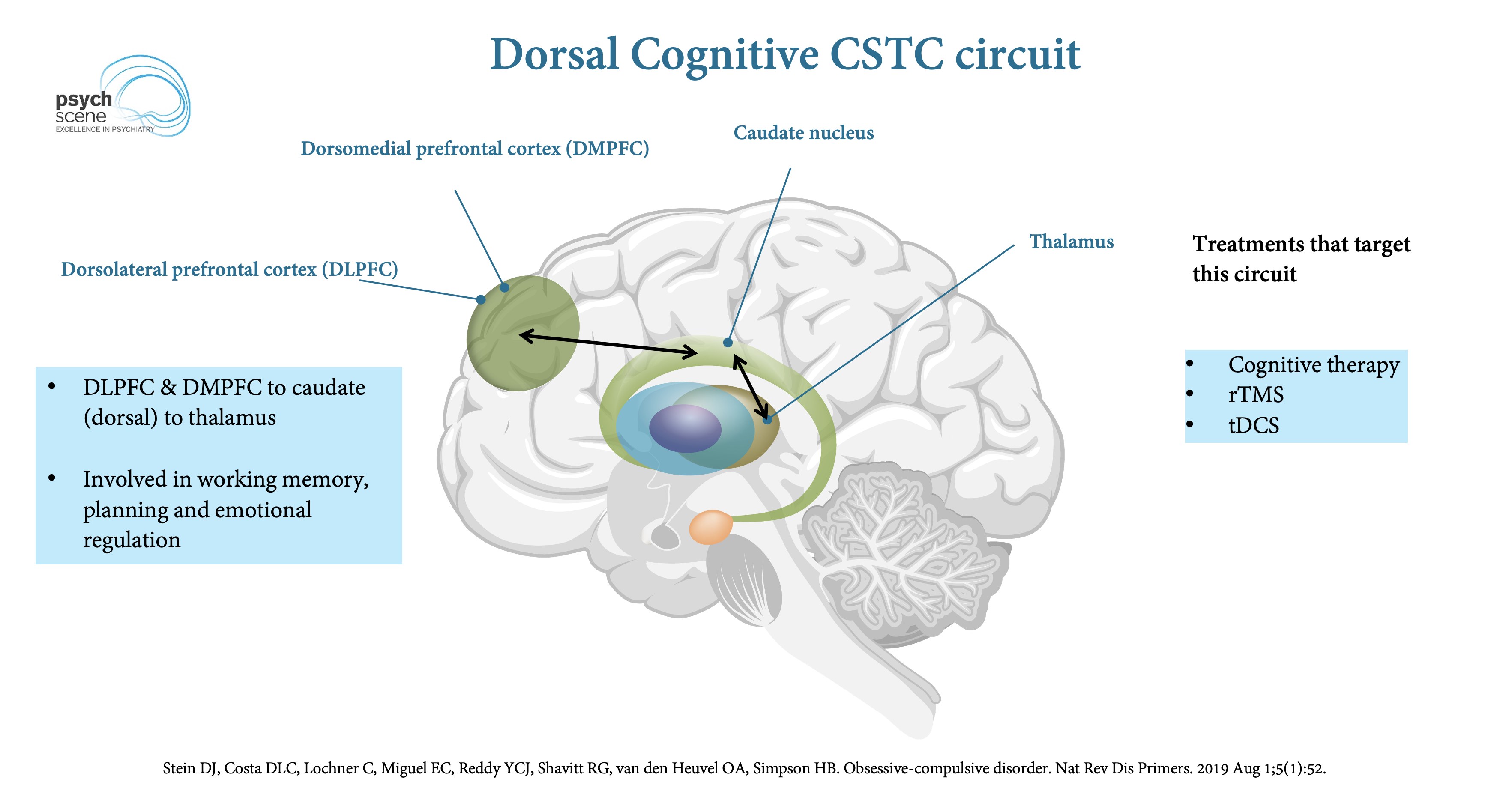 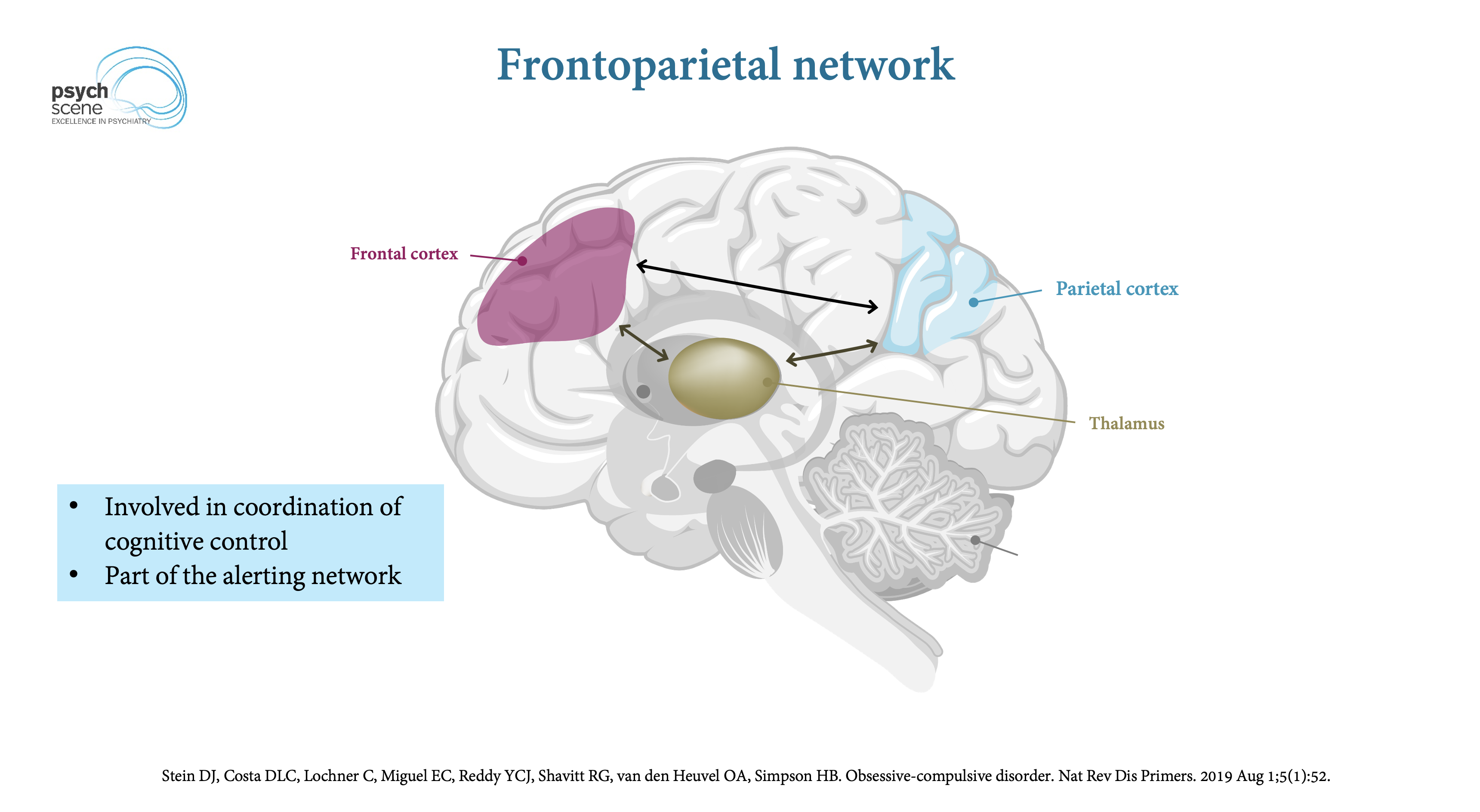 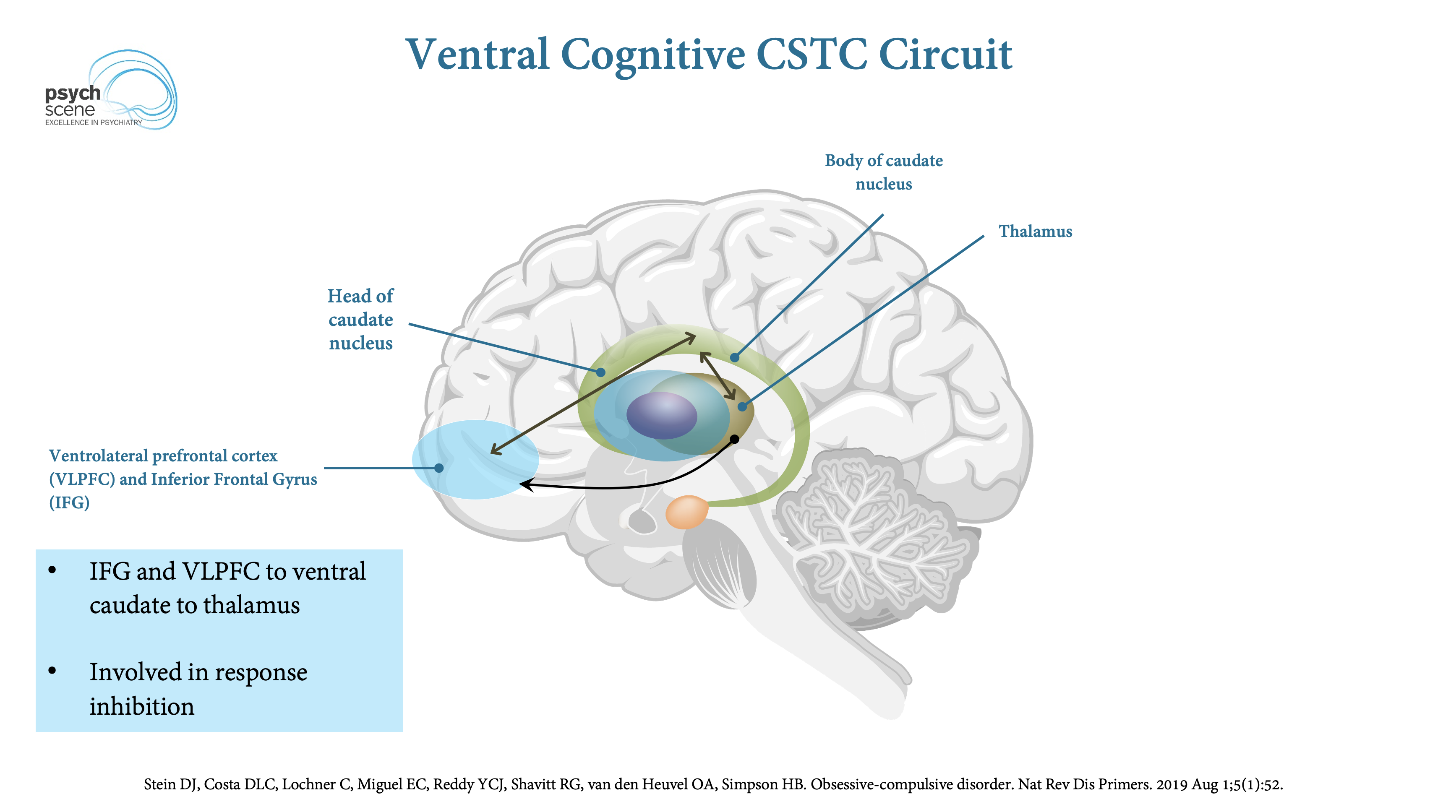 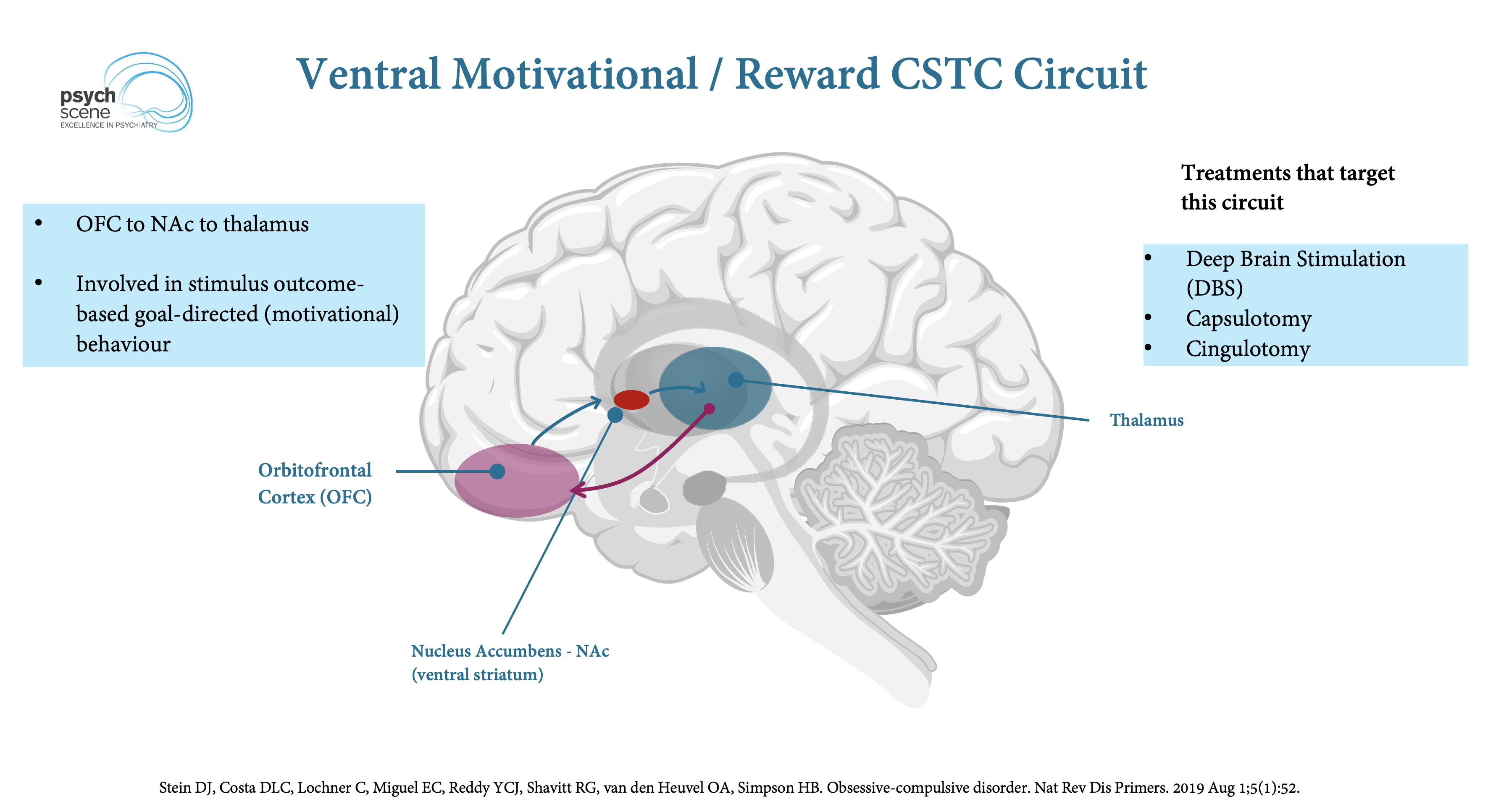 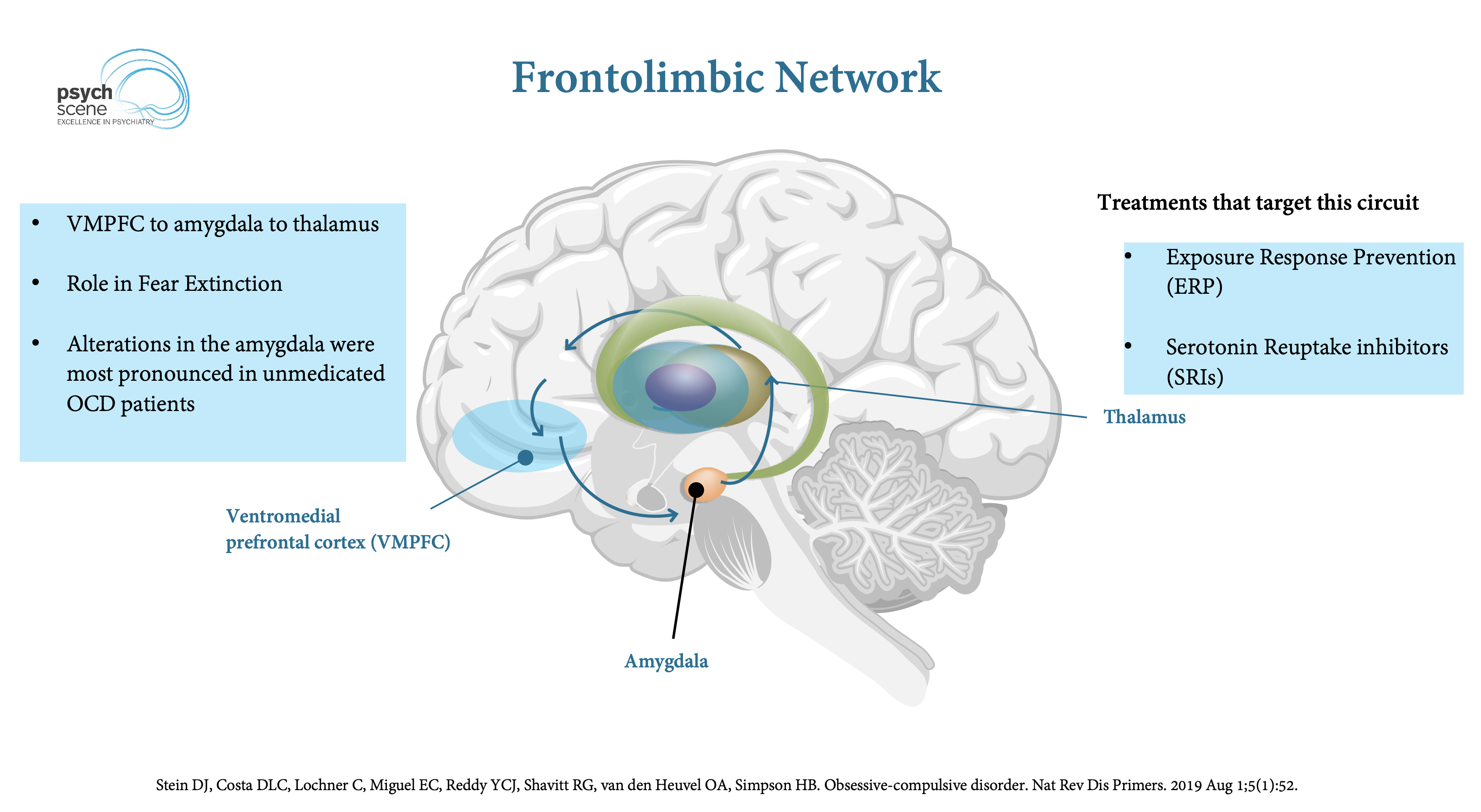 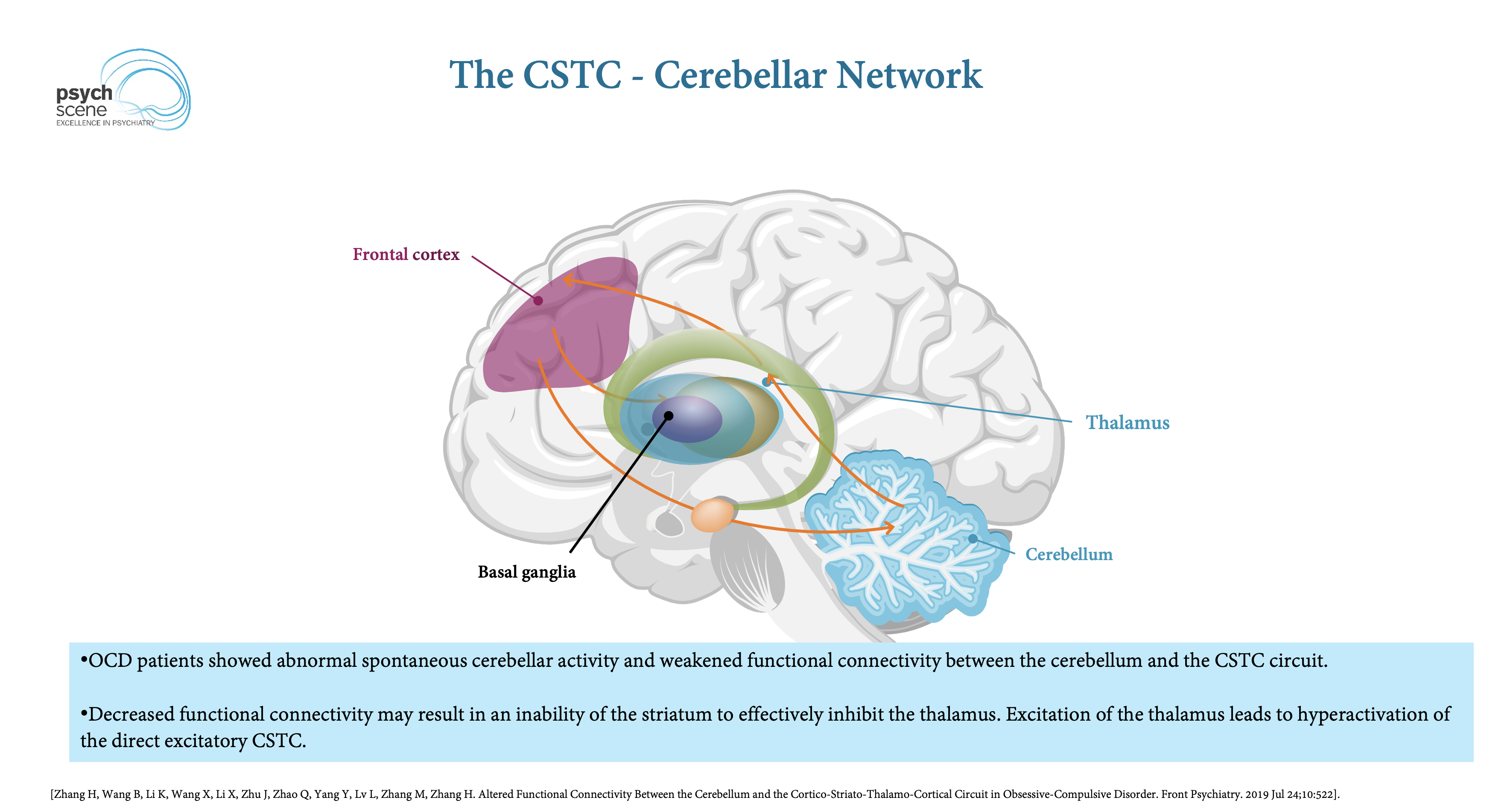 The CSTC consists of a direct excitatory and indirect inhibitory loop. 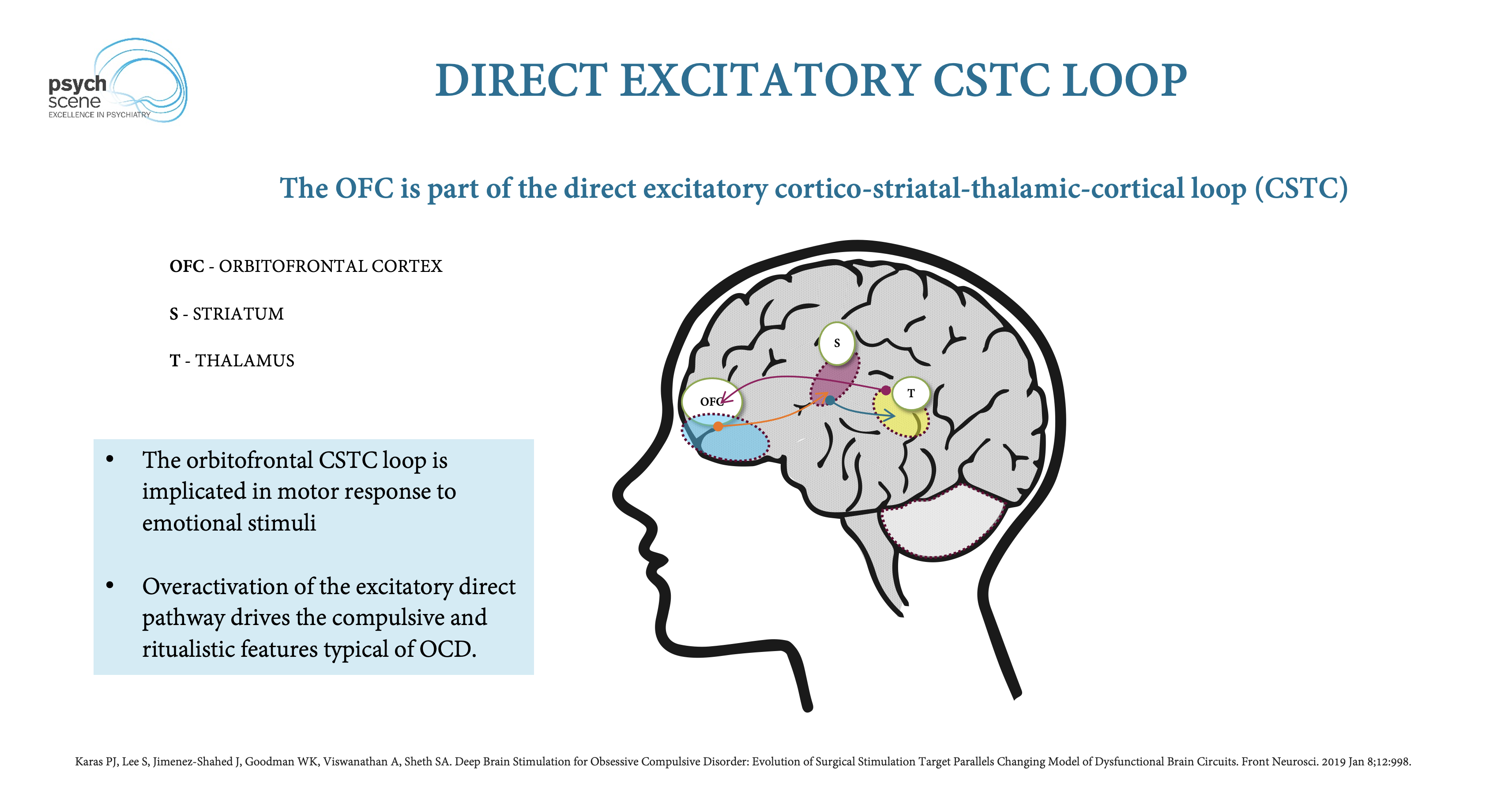 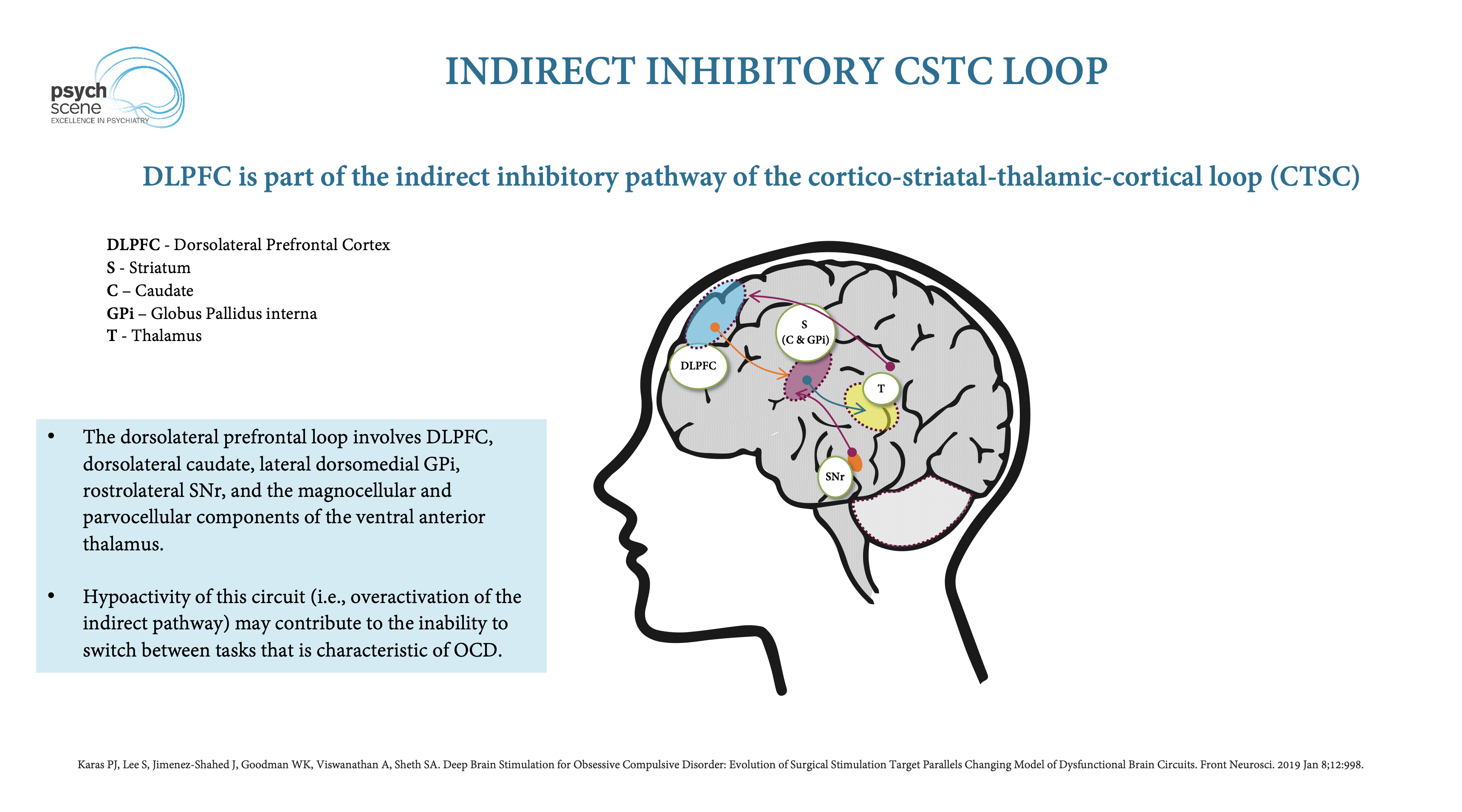 In the normally functioning cortico-striato-thalamo-cortical circuit, direct and indirect pathways lead to increased or decreased inhibition of the thalamus, respectively, in a balanced manner.

In OCD, overactivation of the direct pathway out of proportion to the indirect pathway leads to pathologic overactivity of cortical regions in an insidious excitatory loop.

The imbalance indicates that the ‘brake’ that would control repetition is faulty. 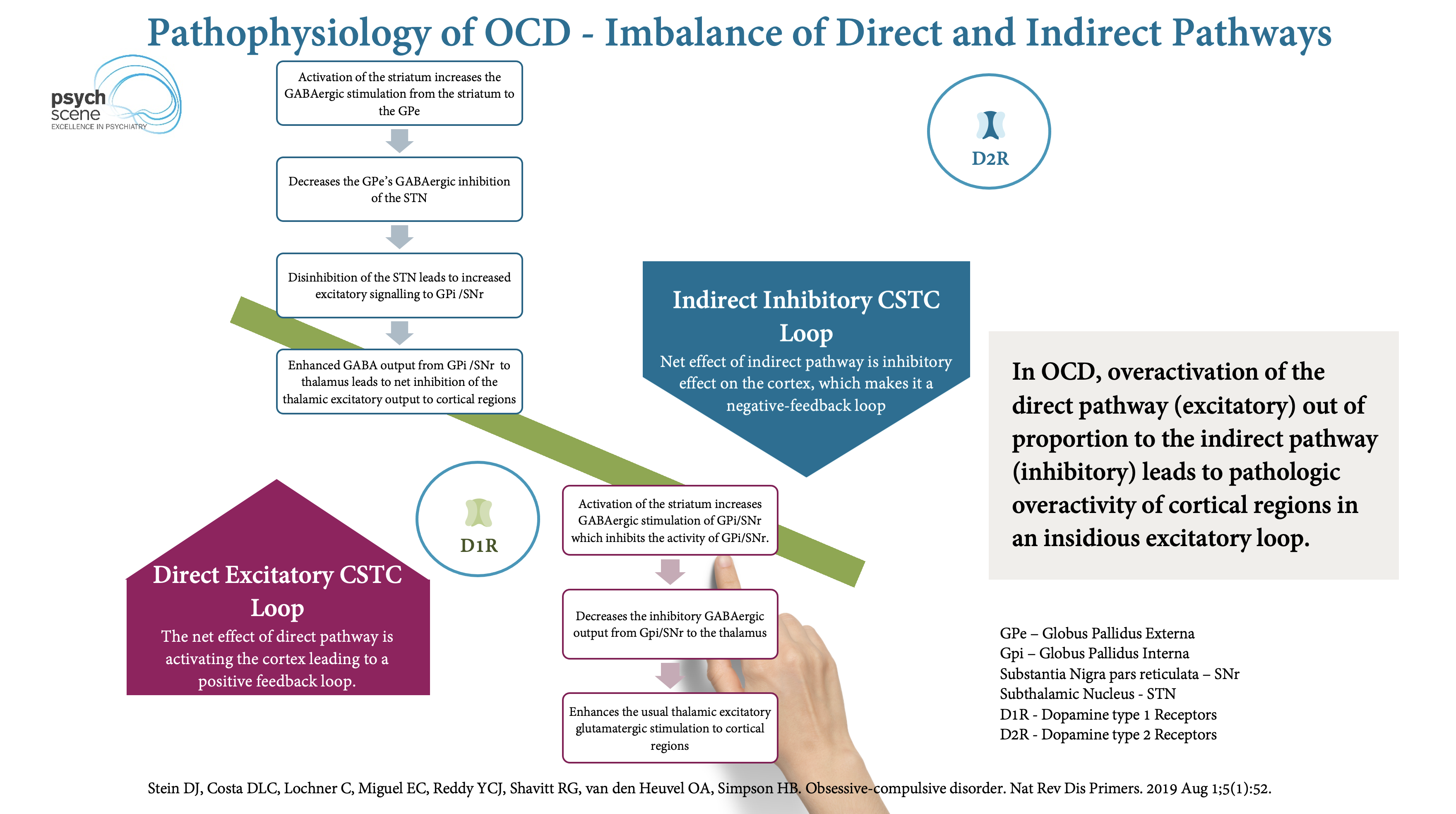 Whereas the CTSC hypothesis provides a useful framework, it doesn’t comprehensively explain the pathophysiology of OCD.

Imbalance of Goal-directed vs Habit areas:

Studies are increasingly focusing on the role of the goal-directed and habit areas of the brain in OCD. [Lipton et al, 2019] 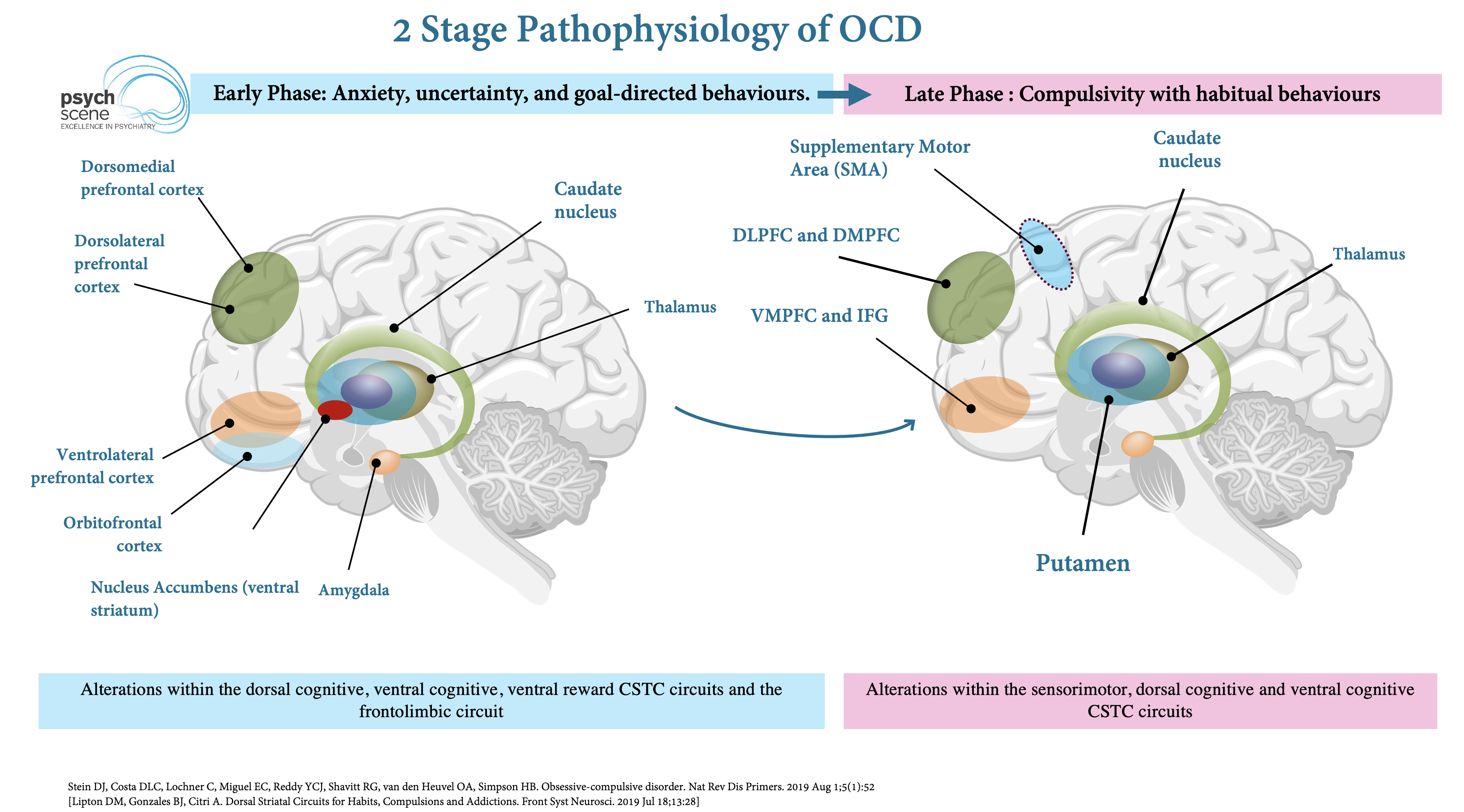 Brain activity in OCD during emotional processing vs cognitive processing

OCD is characterised by dysfunctions in affective and cognitive processing. This cognitive affective dysfunction is a feature of many psychiatric disorders and may lack specificity. [Stein et al, 2019]

The net effect of cognitive-affective dysfunction is increased habitual responding and affective processing with impaired cognitive control in patients with OCD. 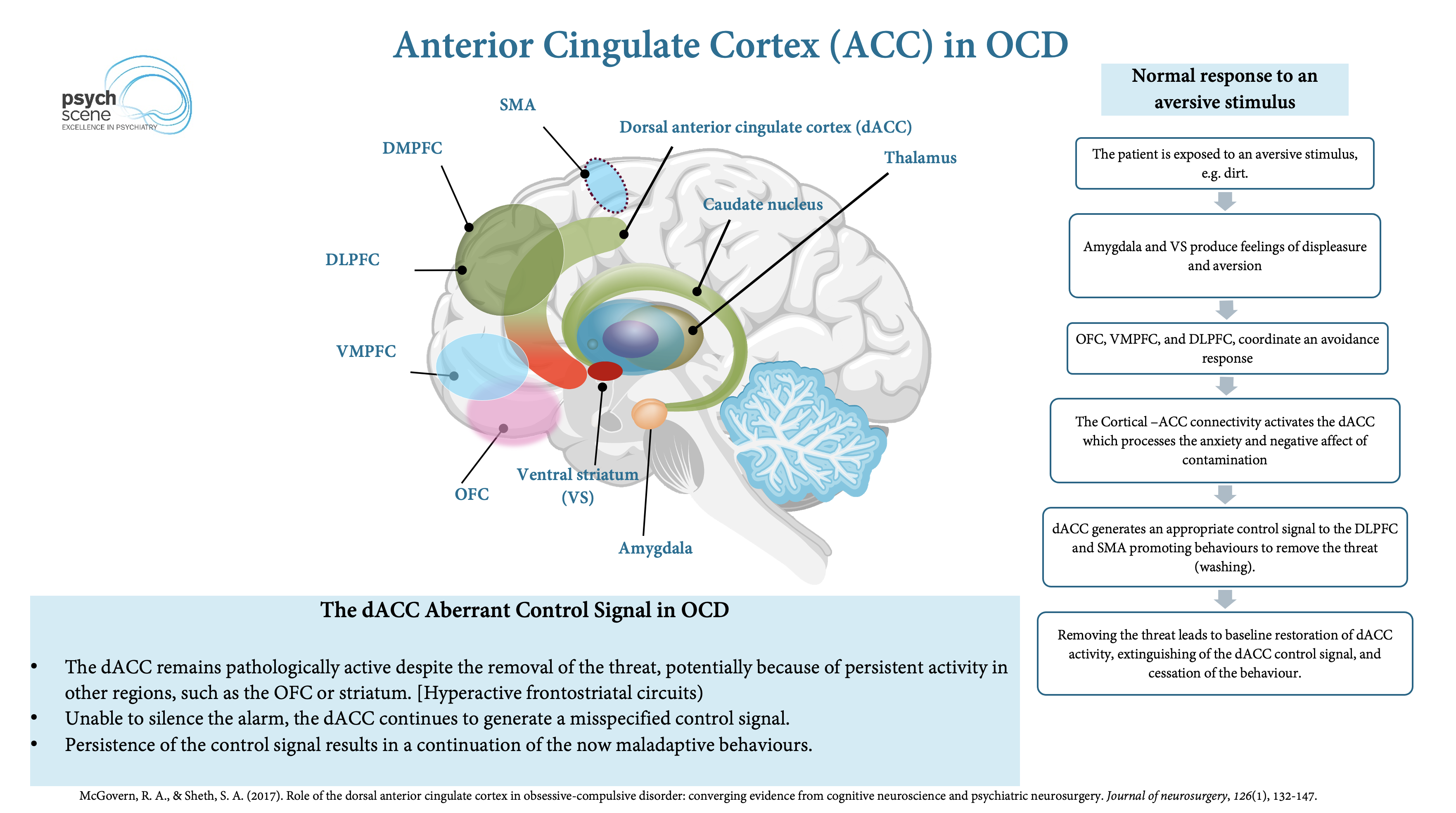 The role of serotonin is implicated due to the finding that SSRIs are effective treatments for OCD.

Some potential therapeutic effects of serotonergic transmission in OCD are:

Dopamine has a key role in stereotypic behaviour

There are 3 systems involved in reward processing-based learning.

OCD can thus be conceptualised as a disorder with an imbalance between the goal-directed and habit systems. (See earlier – Early phase to Late phase transition)

The striatal neurons for valuation, goal-directed, and habit systems can be approximately mapped on the ventral, dorsomedial, and dorsolateral striatum. [Lipton et al, 2019]

NEURAL CORRELATES OF SYMPTOMS AND OTHER BRAIN CHANGES IN OCD

According to the OCD loop network:

There is increasing evidence of the existence of a subset of OCD associated with infections and autoimmunity.

The following subsets have been described: [Endres et al, 2022]

PANDAS can be diagnosed with all of the following symptoms (1–5) present: 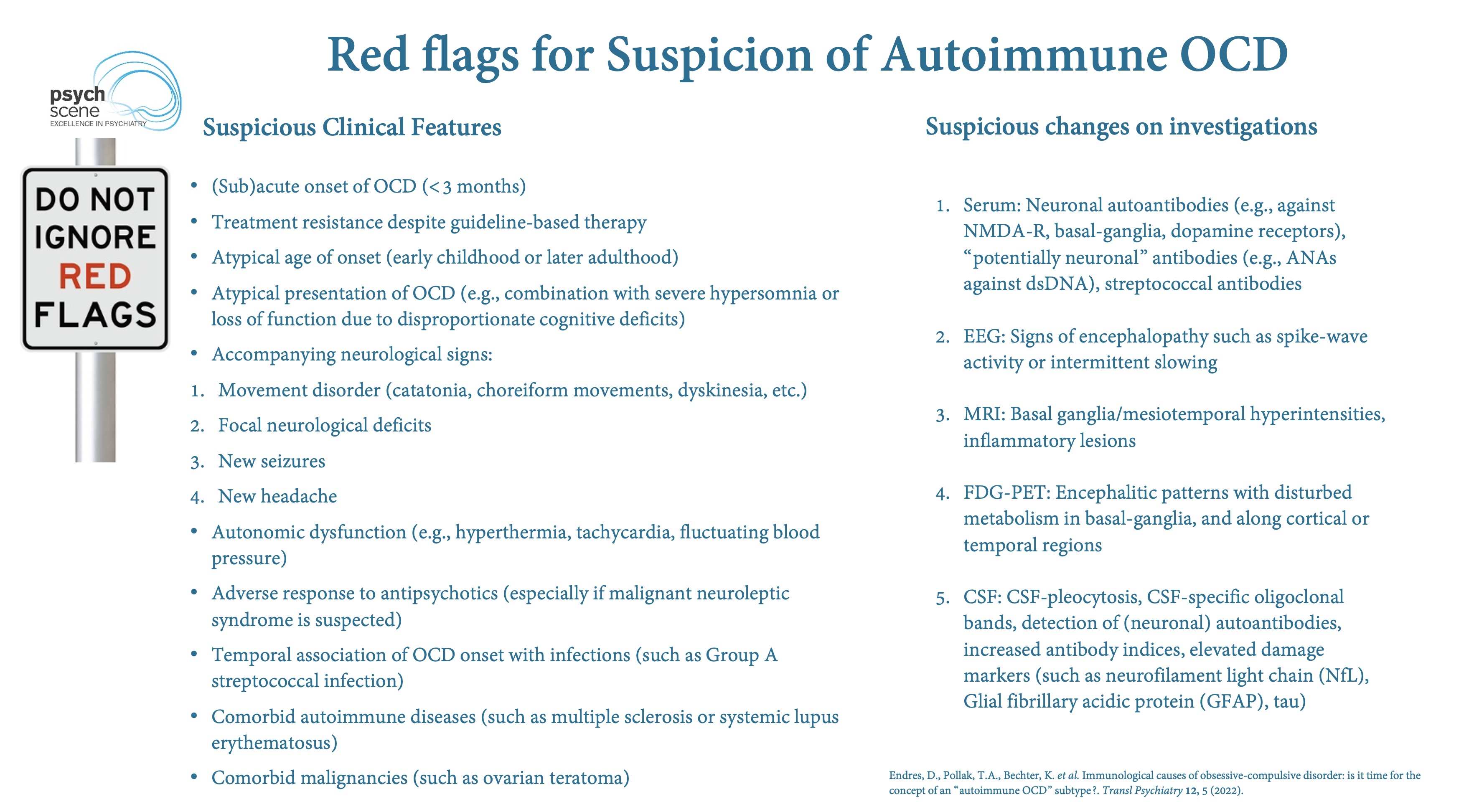 Although a systematic review and meta-analysis showed that cognitive behavioural therapy (CBT) has been shown to be more effective than selective serotonin reuptake inhibitors (SSRIs), in clinical practice both SSRIs and CBT are often used together. [Ost L et al, 2015

Both individual and group CBT are as effective as each other.

The psychological mechanisms underpinning this technique are habituation and extinction.

SSRIs are considered the first line in the treatment of OCD. Approximately 50 % of patients respond to first-line treatments.

High-dose SSRIs have been shown to be more effective than lower doses. SSRIs should be prescribed for at least 12 weeks to determine responsiveness.

A recent meta-analysis showed that a significant benefit from SSRI treatment compared to placebo occurred already after 2 weeks after the start of treatment suggesting that the greatest incremental treatment gains in OCD are seen early on in SSRI treatment. [Issari et al, 2016]

The effectiveness of SSRIs was optimal at the fluoxetine equivalent dose of about 40 mg, and the efficacy decreased as the dose increased higher than 40 mg. [Xu et al, 2021]

Equivalent doses of other SSRIs and clomipramine at Fluoxetine dose of 20 mg :

Long-term treatment (24-52 weeks) with an SSRI was associated with a significantly lower probability of relapse. [Del Casale et al, 2019]

SSRIs should be maintained at the maximum effective dose for at least 12 months. [Del Casale et al, 2019]

Approximately 25% of all OCD patients will be classified as treatment-resistant: this is defined as failing two different SSRI courses.

Furthermore, 40-60% of all patients may be considered as responding positively to treatment but will have ongoing residual symptoms.

The World Federation of Societies of Biological Psychiatry (WFSBP) recommended a co-administration of SSRI with haloperidol, quetiapine, olanzapine or risperidone for treatment-resistant OCD. [Bandelow et al, 2022]

Key techniques for surgery are:

The most common comorbidities are anxiety disorders, mood disorders, impulse-control disorders and substance use disorders.

Other disorders that co-occur are ADHD, Tourette’s, and tic disorders. 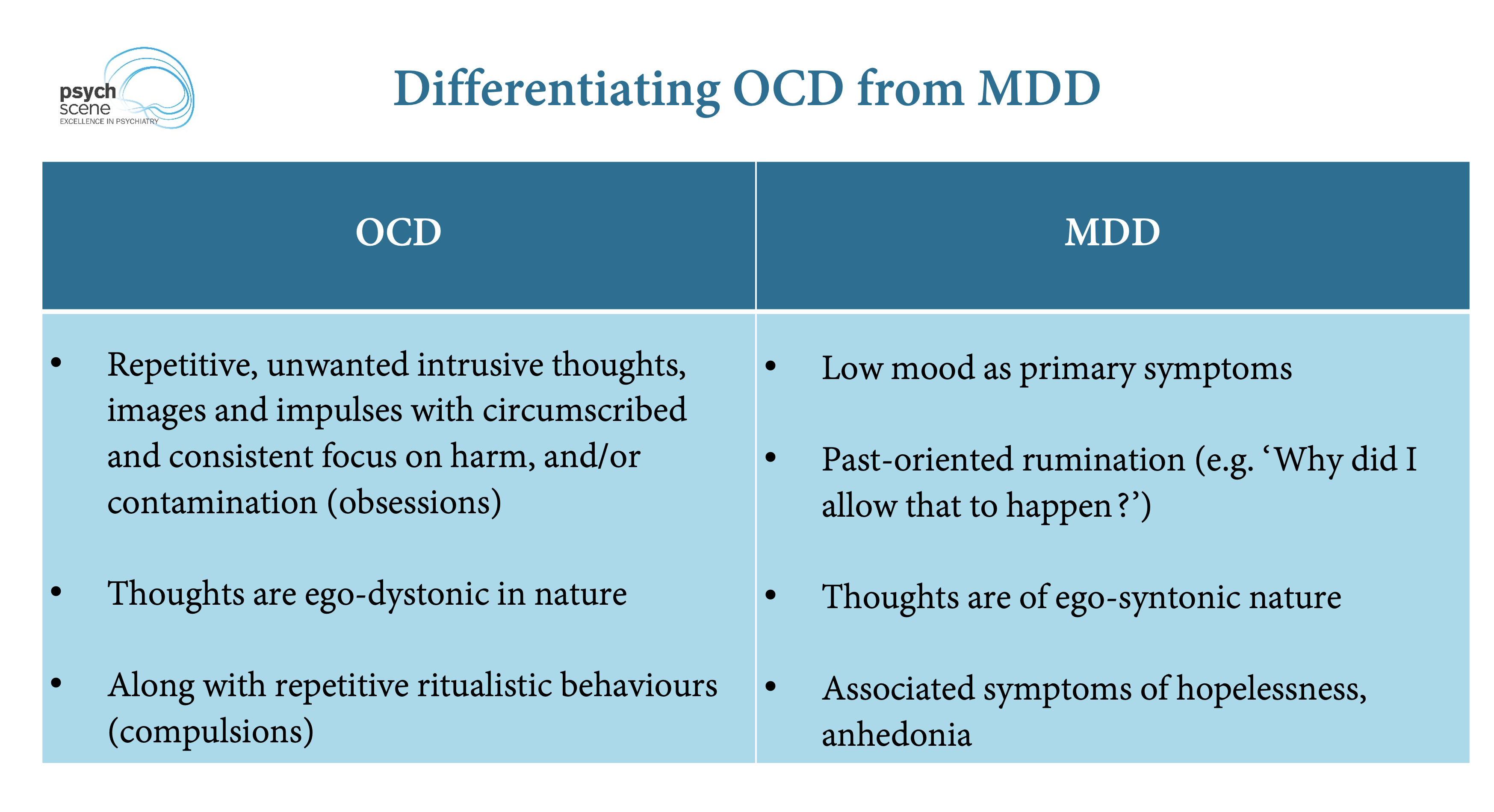 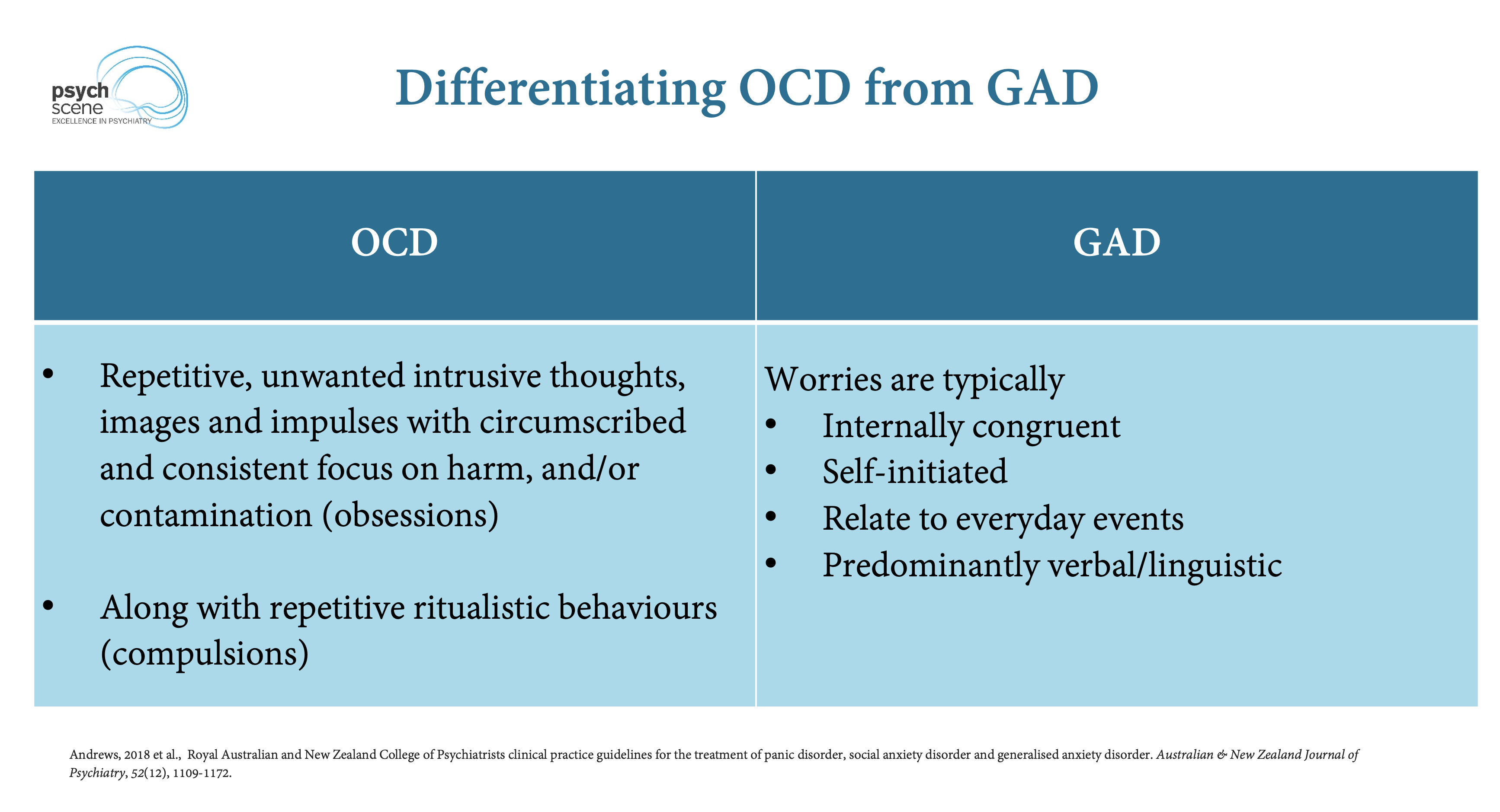 Individuals with schizophrenia have a significant incidence of OCD symptoms (25%). This association may be related to

Read more about the management of OC symptoms in schizophrenia. 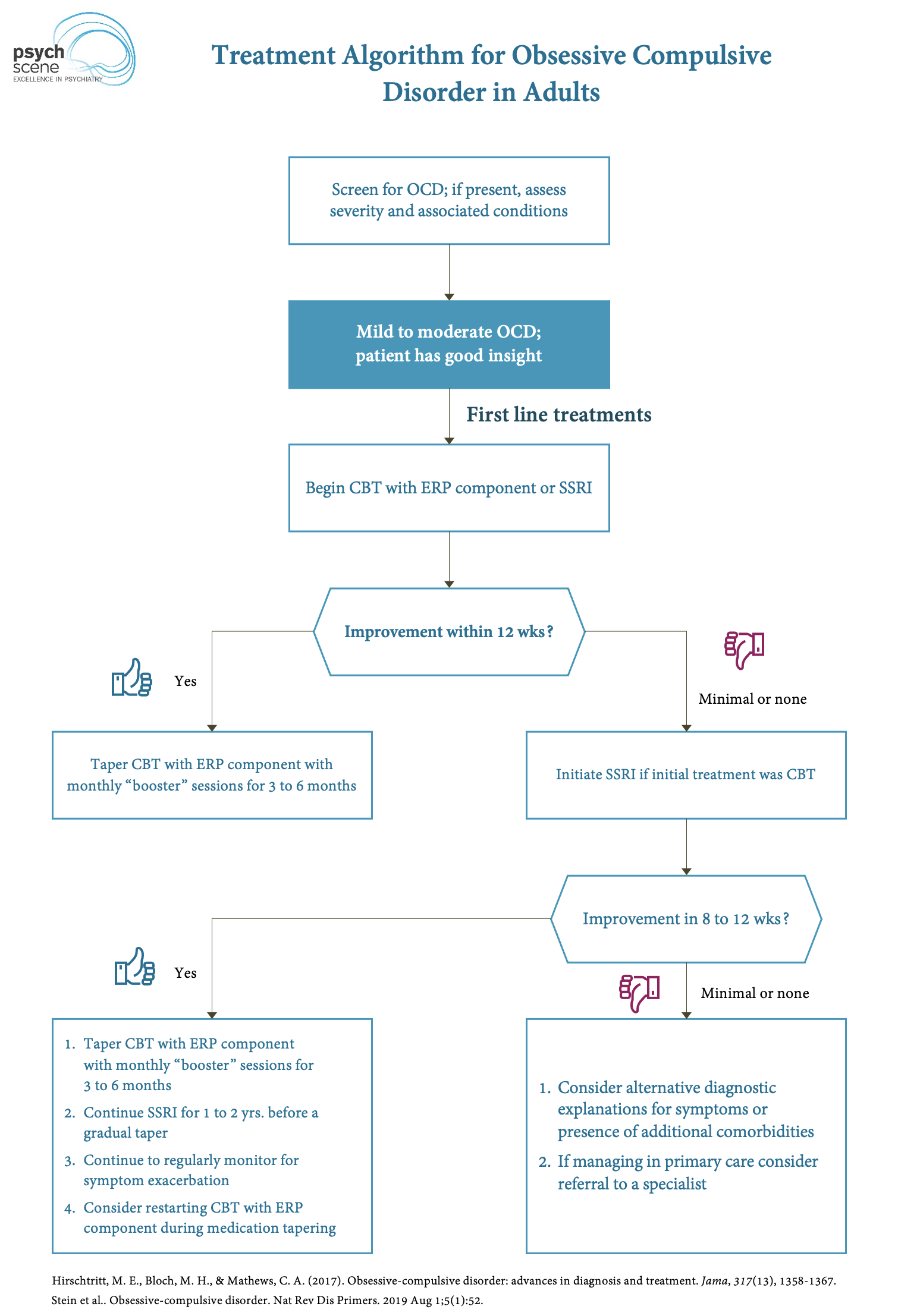 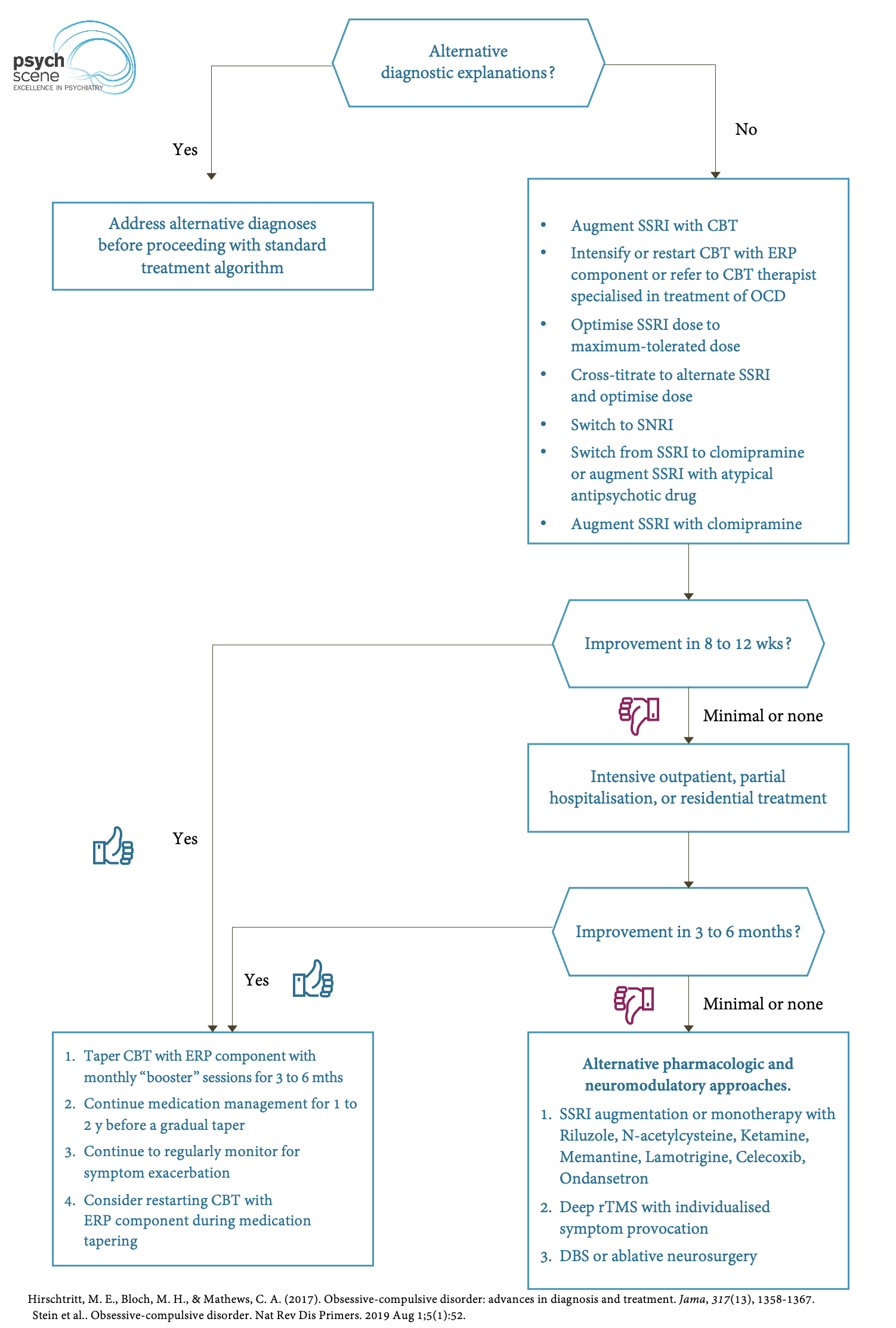 OCD is a highly disabling psychiatric condition characterised by obsessions and compulsions.

The condition has a high degree of comorbidity with mood and anxiety disorders and other neurodevelopmental disorders.

The neurobiology of OCD is complex and focuses on the imbalance between the goal-directed and habit areas of the brain mediated by the CSTC circuit.

While the condition is treatable in many patients, approx 25% of patients are classified as treatment refractory.

Recent advances in the use of pharmacological agents targeting non-serotonergic pathways, neurostimulation and neurosurgery for severe cases show promise.

World Health Organization (WHO). The Global Burden of Disease: 2004

Quality of life in obsessive-compulsive disorder: impact of the disorder and of treatment.

Subramaniam M et al., Quality of life in obsessive-compulsive disorder: impact of the disorder and of treatment. CNS Drugs. 2013

The Yale-Brown Obsessive Compulsive Scale I: development, use, and reliability

Etiology of obsessions and compulsions: a meta-analysis and narrative review of twin studies.

Altered Functional Connectivity Between the Cerebellum and the Cortico-Striato-Thalamo-Cortical Circuit in Obsessive-Compulsive Disorder.

The role of habit in compulsivity.

Serotonin and beyond: therapeutics for major depression

Investigating the Role of Glutamate in Obsessive-Compulsive Disorder: Current Perspectives.

Immunological causes of obsessive-compulsive disorder: is it time for the concept of an “autoimmune OCD” subtype?.

Effectiveness of long-term augmentation with citalopram to clomipramine in treatment-resistant OCD patients.

Venlafaxine versus clomipramine in the treatment of obsessive-compulsive disorder: a preliminary single-blind, 12-week, controlled study.

Buprenorphine augmentation in the treatment of refractory obsessive–compulsive disorder.

Therapeutic neurostimulation in obsessive-compulsive and related disorders: A systematic review

Efficacy and tolerability of repetitive transcranial magnetic stimulation for the treatment of obsessive-compulsive disorder in adults: a systematic review and network meta-analysis.

Deep brain stimulation for obsessive-compulsive disorder: a meta-analysis of treatment outcome and predictors of response

The relationship between obsessive-compulsive disorder and anxiety and affective disorders

The Symptoms of OCD and Depression Are Discrete and Not Exclusively Negative Affectivity.

Moore KA, Howell J. Yes: The Symptoms of OCD and Depression Are Discrete and Not Exclusively Negative Affectivity. Front Psychol. 2017 May 12;8:753.