Phineas Gage in 1848 suffered a terrible accident that resulted in an iron rod driven into his left frontal lobe after he placed the iron on an explosive device. Despite the seriousness of the injury, he was able to walk up to a cart which took him to the hospital.

Following this, he showed a pronounced change in personality and behaviour changing from a responsible and social well-adapted man to being becoming disrespectful, lacking in social skills, irresponsible and soon lost his job.

Traumatic brain injury (TBI) is called the silent epidemic as many of the symptoms are not readily detectable despite TBI being a worldwide public health issue.

Epidemiological studies in the US show that annually up to 2 million people experience a traumatic brain injury (TBI). Of these, almost 300,000 are hospitalised, and over 50,000 will die from their injuries. [1]

The 2010 Global Burden of Disease survey shows that in most countries, motor vehicle accidents are the most prevalent cause of TBIs. [3]

In regions of the world that are currently experiencing fighting and hostilities (Central America, the Middle East and Central Africa), military combat is the most prevalent cause of TBI. [4]

This article does not cover chronic traumatic encephalopathy (CTE), a syndrome characterised by a range of mood, behavioural and cognitive symptoms described in boxers and other sportspeople who have sustained repetitive acceleration-deceleration forces to the brain [5]. We will cover this in another article.

TYPE OF TBI AND NEUROLOGICAL DEFICITS

A widely accepted severity classification is based on the Glasgow Coma Scale (GCS) applied at initial presentation.

Duration of PTA has also been proposed as a classification for mild, moderate and severe head injury

There is a clear biomechanical relationship between the type of TBI and the cascade of neurological deficits encountered:

The neurobiological mechanisms of TBI involve the combination of focal damage and diffuse injury.

Primarily, focal injury occurs at the time of the event and includes cortical and subcortical lacerations as well as intracranial bleeding.

Diffuse injuries, on the other hand, are related to the pathological stretching and tearing of axons, otherwise known as a diffuse axonal injury (DAI). 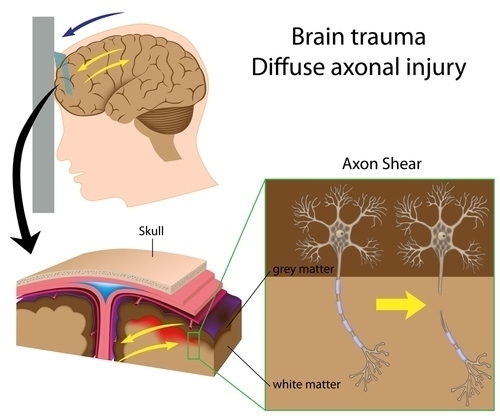 There is a complex cascade of cellular and neurochemical effects that follow the initial trauma. [6], [7]

Firstly, the acute biomechanical damage of brain tissue is associated with the perturbation of neuronal membranes resulting in the influx of extracellular calcium ions and the efflux of potassium ions. The influx of calcium ions results in mitochondrial damage by reducing the production of ATP and increasing oxidative stress. 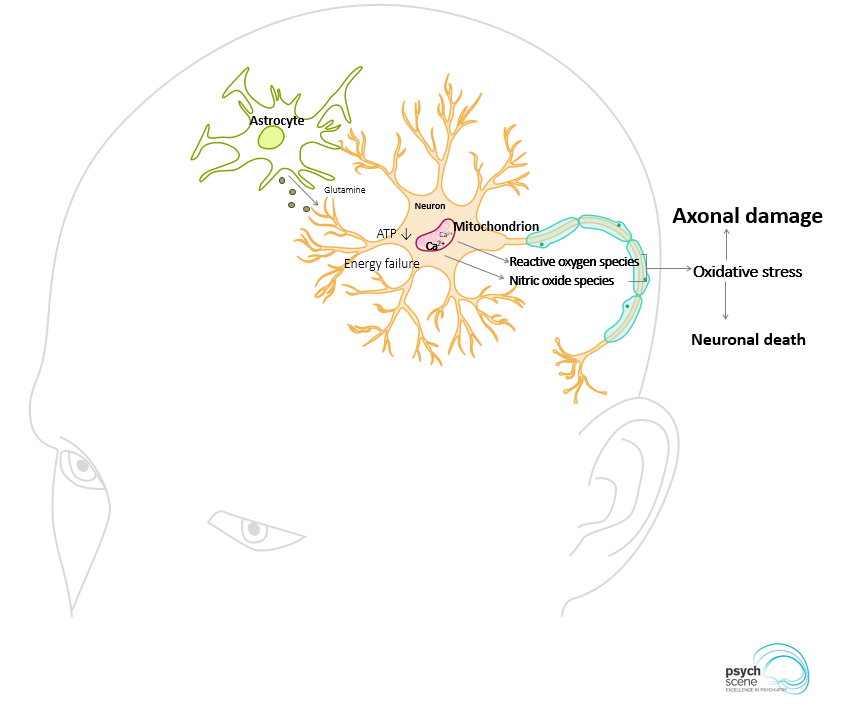 These events cause the release of excitatory amino acids (e.g. glutamate) that bind to the N-methyl-D-aspartate (NMDA) receptors, which results in further depolarisation of the neuron. 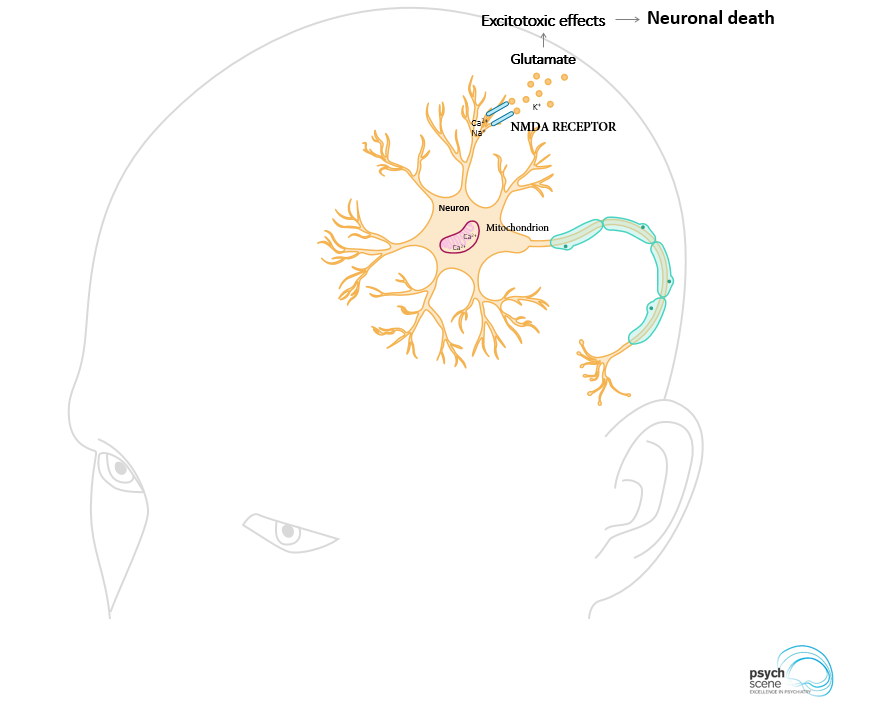 As calcium ion levels increase, there is the suppression of glucose metabolism. However, as the cell is attempting to restore ionic balance, this raises glucose consumption, which means that internal energy stores are depleted.

Together, this creates an environment of anaerobic glycolysis and the overproduction of lactate, which causes acidosis, oxidative damage, and even cell death. 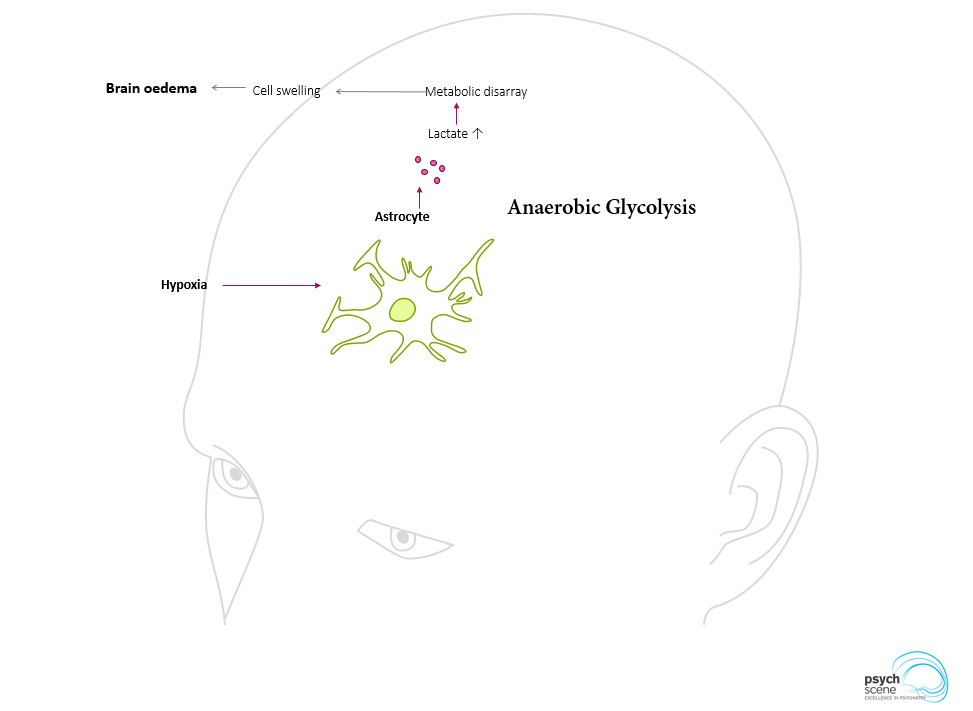 A common consequence of TBI is the activation of microglial cells. [8]

Microglial cells are then known to migrate to injured brain tissue where they play an essential role in the inflammatory response after TBI.

Microglial activation is necessary to clear up molecular and cellular debris at the site of damage.

In the short term, microglia may have regenerative properties as they attempt to restore normal cellular function in damaged brain regions.

However, when chronically activated, microglia are associated with the up-regulation of pro-inflammatory cytokines and other noxious inflammation mediators that result in further tissue and cellular damage. 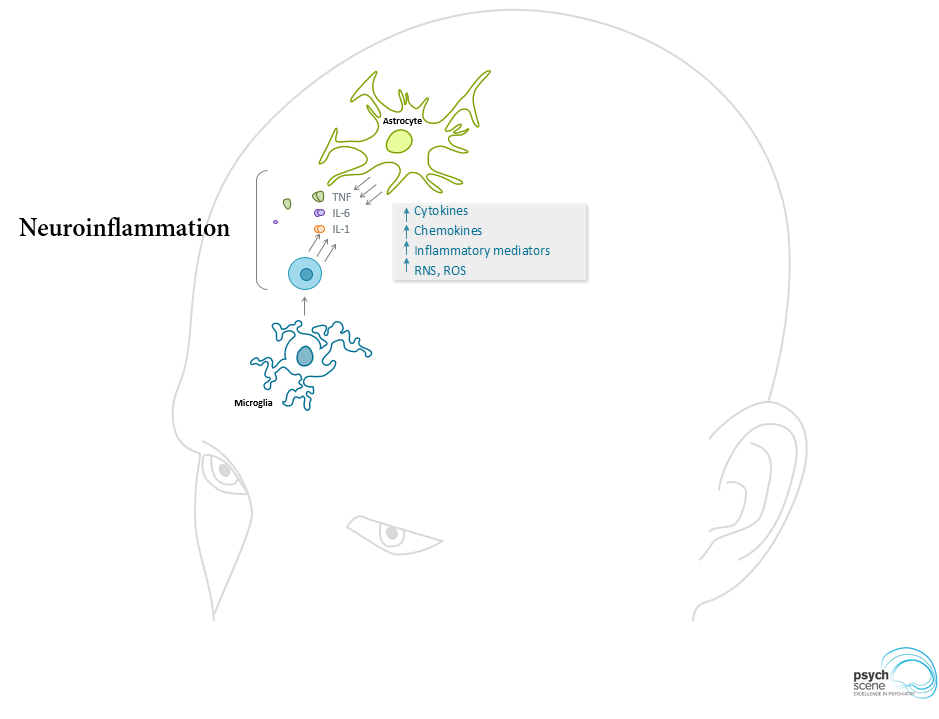 Neutrophils and macrophages infiltrated at the site of the injury maintain neuroinflammation which affects the endothelium thus impairing the integrity of the blood-brain barrier, leading to increased extracellular fluid that, combined with cell swelling, leads to brain oedema and increased ICP. 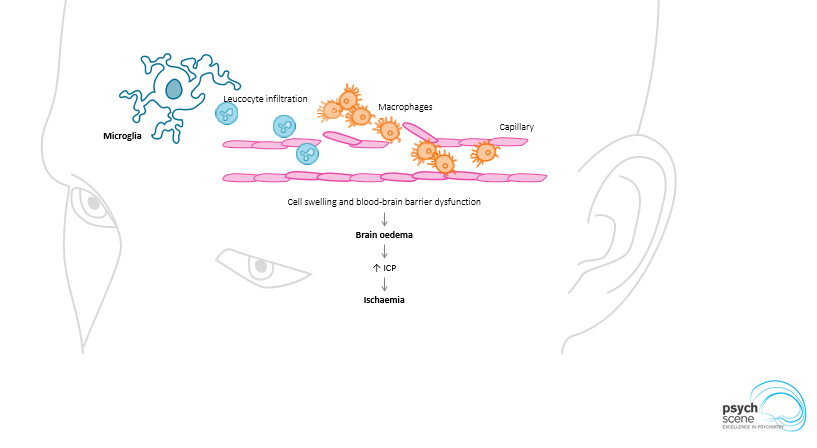 There are several high-risk regions of the brain that are vulnerable to TBI.

The frontal-subcortical circuits that are involved in cognition and social behaviour are primarily involved.

Therefore, the severity and location of the brain injury play important roles in the resulting neuropsychological sequelae.

In one study they compared the frequency of psychiatric disorders in 939 patients with different severities of TBI.

The prevalence of any psychiatric illness in the first year was 49% following a moderate-to-severe TBI, 34% following a mild TBI, and 18% in the control group that had no TBI. [9]

A Finnish study which identified patients up to 30 years after a TBI showed rates as high as 48.3% for any psychiatric disorder and major depression was the most common diagnosis (26.7%). [10]

Recent military conflicts have revealed that there is a complex relationship between psychological and biomechanical trauma. [11], [12]

One study, in particular, showed that there were higher rates of PTSD in Iraq war veterans who had reported a previous TBI in conjunction with loss of consciousness in comparison with veterans that reported other injuries, or no injuries.[13]

Post TBI, patients with acute stress reaction are more likely to develop PTSD compared to those without (81% vs 11.5%).

It is suggested that contact or impact forces to the hippocampus and amygdala are likely to be implicated in PTSD.

The hippocampus and amygdala are brain regions that have networks associated with contextual memory consolidation and fear conditioning. Alterations in these circuits have been shown to trigger PTSD symptoms after the exposure to trauma.

Moreover, the hippocampus is particularly vulnerable to the effects of traumatic stress. Therefore, TBI-related biomechanical forces and neurochemical stress-mediators could promote the development of PTSD.

Interestingly, subjects with memories of the traumatic event are more likely to develop PTSD compared to those with amnesia of the event. Thus, although PTSD can occur with post-traumatic amnesia (PTA), PTA may have a protective role in the development of PTSD.

The biomarker S-100B  which is an astrocytic protein when raised in the acute phase of TBI is predictive of PTSD one year later. [14]

The biological treatment of PTSD is no different to PTSD without brain injury with the exception that medication choices should take into account the sensitivity to side effects that can accompany TBI. (Read more on treatment of PTSD)

Trauma-focused CBT may need to be adjusted to take into account cognitive impairments.

Early CBT in the acute stress reaction phase post-trauma can prevent the development of PTSD. The proportion of patients with PTSD at 6  months was reduced from 58% to 17%. [15]

Cognitive impairments are the most common complaints after TBI and can present substantial challenges to independent living, social re-adaptation, family life, and return to work.

These cognitive domains are often affected persistently due to significant injury to medial temporal regions, the dorsolateral prefrontal cortex, and subcortical white matter that connects these regions.

A recent meta-analysis also showed that head injury is associated with increased risks of dementia and Alzheimer’s disease (AD). [16]

Prof Fann and colleagues in 2018, published their research in the Lancet which showed that TBI was associated with an increased risk of dementia both compared with people without a history of TBI and with people with non-TBI trauma.

Neuropsychological testing is indicated and highlights the areas of deficit and those of preserved function.

However, this form of treatment is only useful for patients with mild-to-moderate cognitive impairments who still have a degree of functional independence.

Cholinesterase inhibitors (Donepezil and Rivastigmine) are useful and indicated in patients with significant memory impairment.

TBI can also result in an increased risk of mood and disorders. Depressive disorders associated with TBI are categorised as Mood Disorders Due to Another Medical Condition (TBI) and are classified as follows:

These disorders differentiate from other common emotional disorders in patients with TBI, such as the transient disturbances of emotional expression and experience that occur in this population. This includes symptoms such as emotional lability and pseudobulbar involvement (pathological laughter and crying).

Prevalence rates for depression vary from 18-61%. After head injury, the boundaries between depression, adjustment disorder and grief often overlap.

Rupture of the neural circuits involving prefrontal cortex, amygdala, hippocampus, basal ganglia and thalamus may be implicated in the development of depression. 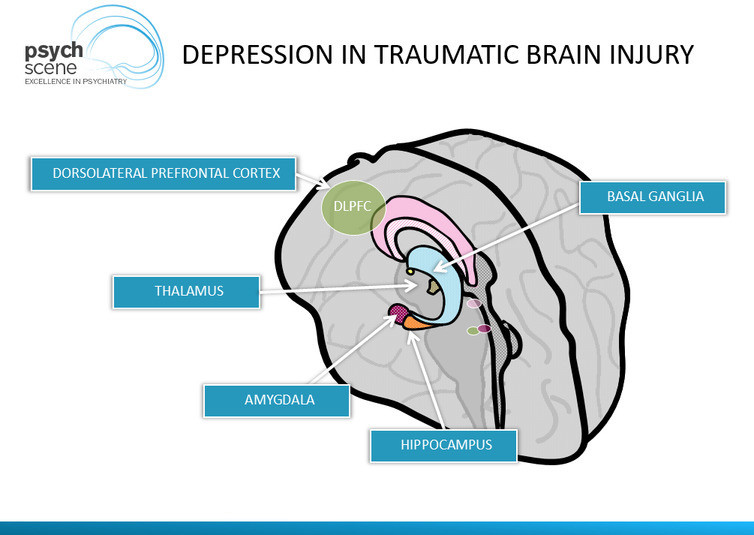 Depression has been found to be correlated with lower bilateral hippocampal volume and reduction of left frontal grey matter.

Psychoeducation regarding TBI and recovery expectations, reassurances, and frequent support is recommended.

Medications used to treat idiopathic depressive disorders are useful for the treatment of depression in patients with TBI.

Due to concerns about the tolerability and effectiveness of TCAs in this population, SSRIs are the first-line recommendation:

For example, fluoxetine and paroxetine are robust inhibitors of cytochrome P450 enzymes and are associated with problematic drug-drug interactions when co-administered with a substrate, inhibitor, or an inducer of these enzymes.

Paroxetine also has significant anticholinergic effects, which increases the risk of treatment-related cognitive dysfunction among patients with TBI.

SSRI’s are also effective for pathological laughter and crying.

Depression complicated by brain injury can be treatment resistant. Therefore alternatives should be considered in the context of resistance. (Read alternative antidepressants, their mechanisms of action and side effect profiles.)

Mania associated with TBI may present with higher aggression, irritability and less euphoria. [19]

Injuries of the brain affecting the inhibitory function of the frontal lobes on the subcortical limbic structures is implicated in the development of mania.

Mania is more common in individuals that have damage to the orbitofrontal and temporal cortex.

Antipsychotic medications such as quetiapine, olanzapine and aripiprazole are useful with a caution that higher doses can reduce seizure threshold.

The neuroprotective effect of lithium may be particularly useful in this group of patients. However, confusion, ataxia and reduced seizure threshold are potential side effects to be vigilant for.

The term “personality change’, is often used by family members and caregivers to describe the changes to patients after brain injury. The personality changes described are often challenging to address because the patient is often unable to appreciate that their behaviour is different after the TBI.

Pharmacological treatment of TBI patients with personality changes depends on the presenting symptoms.

The literature is supportive of the use of psychotropic agents from several classes, including mood stabilisers, antipsychotics, and antidepressants.

However, there are no significant randomised controlled trials demonstrating the efficacy of one therapy over another.

Stimulants, dopaminergic agonists or cholinesterase inhibitors can be tried for apathy, abulia and akinetic mutism.

Responds well to Valproate and Carbamazepine.

Benzodiazepines can result in paradoxical disinhibition.

Head injury increases the risk of a chronic psychotic illness such as schizophrenia-like illness.

Patients with a predisposition to psychosis are at highest risk.

Delusions were the most common clinical feature with the content being persecutory, reference, control and grandiosity.

EEG abnormalities in the temporal lobe have been found in patients with psychosis, and some cases had seizures.

Abnormalities in the frontotemporal lobes and the neurotransmitter pathways in these areas have been implicated in the development of psychosis.

Risperidone is effective based on case reports. Other alternative atypical antipsychotics are also reasonable.

Clozapine may be indicated in treatment resistance, and a low threshold for prophylactic valproate should be considered due to the increased risk of seizures in this group of patients.

Contact and inertial forces that act on the head initiate a cascade of cellular and neurochemical effects that cause a TBI. A TBI has short and long-term impacts and increases the risk of developing a psychiatric illness.

1. Incidence of traumatic brain injury in the United States.

4. Changing patterns in the epidemiology of traumatic brain injury.

David, A. (2009). Lishman’s organic psychiatry: a textbook of neuropsychiatry. John Wiley and Sons.