Migraine is a multifactorial disorder with a population prevalence of up to 15% and is recognised as a major cause of disability. Chronic migraine affects 1-2% of the population.

Migraine is also highly co-morbid with psychiatric disorders, particularly depression, anxiety, and post-traumatic stress disorder (PTSD). When left untreated, these psychiatric conditions can increase the risk of chronification of migraine and migraine-related disability. [1]

Migraine attacks are often reported to have four phases:

However, this classification (ICHD-3Beta) is currently undergoing testing and revision to improve the power of its diagnostic criteria and allow for the identification of a broader range of migraine subtypes. [3]

Five headaches that last from 4 to 72 hours and can be described by two of the first four criteria, and one of the last three: 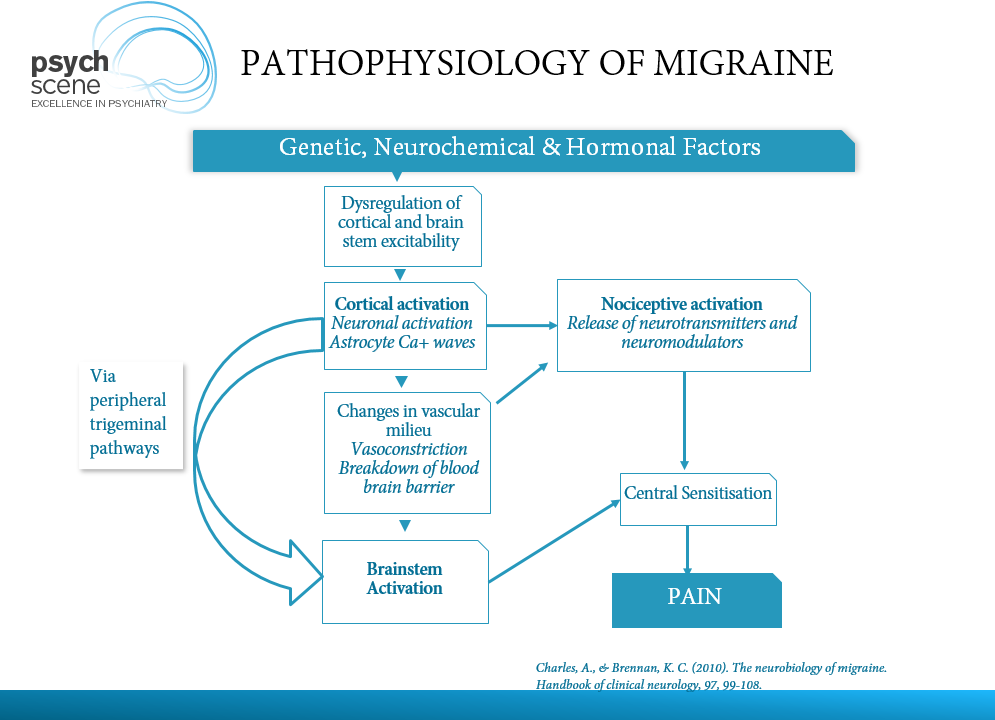 A number of genetic, hormonal and neurochemical factors interact and result in dysregulation of cortical and brainstem excitability. [6]

A concept called cortical spreading depression (CSD) is thought to be associated with migraine.

CSD is characterised by a wave of significant cortical activation followed by sustained inhibition of activity:

This excitability leads to cortical activation via neuronal and glial activation, which in turn is associated with nociceptive activation and vascular changes including enhanced blood-brain barrier permeability.

Nociceptive activation, through the release of various neurotransmitters and neuromodulators, leads to central sensitisation. Central pain sensitisation was covered previously in the article on neuropsychiatry of fibromyalgia. 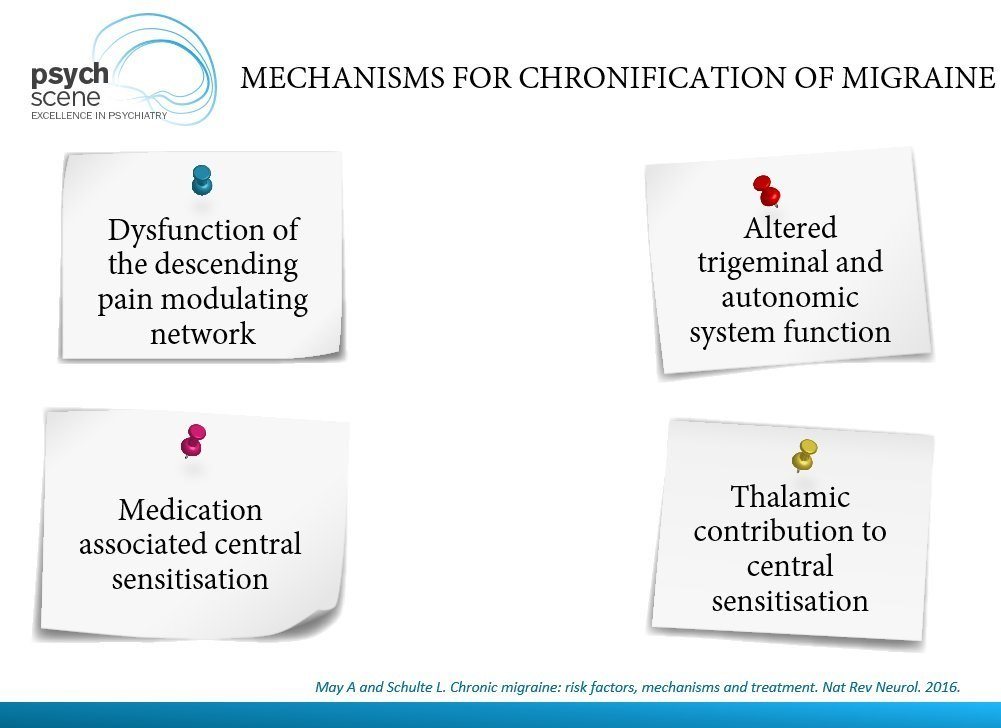 Migraines are often described as a threshold disorder associated with dysfunctional nociceptive processing. [6]

The increased activity in the descending pain-modulating neural networks sensitises an individual to be more susceptible to physiological and environmental factors that precipitate migraine attacks.

Susceptibility to migraine chronification is reported to be due to several genetic and non-genetic risk factors that decrease the threshold, enhance sensitivity, and increase migraine attack frequency.

Two of the most important risk factors are related to medication use, and both are easily modifiable.

Several studies have suggested that obesity and metabolic syndrome (i.e. insulin resistance) are risk factors for increased migraine severity and an increased likelihood of progression from episodic to chronic frequency. [10], [11]

The comorbidity of these disorders is possibly due to common pathophysiological mechanisms—such as shared inflammatory mediators.

It is also interesting to note that hypertension, in association with obesity, is associated with increased intracranial pressure.

This increased intracranial pressure has been observed in 10% of chronic migraine patients, and this may underpin the comorbid relationship between migraines and metabolic issues in some cases. [12]

Chronic migraine, but not episodic migraines, are significantly associated with other neurological disorders such as epilepsy and stroke as well as psychiatric illnesses such as depression, anxiety, bipolar disorder, and PTSD. [1] 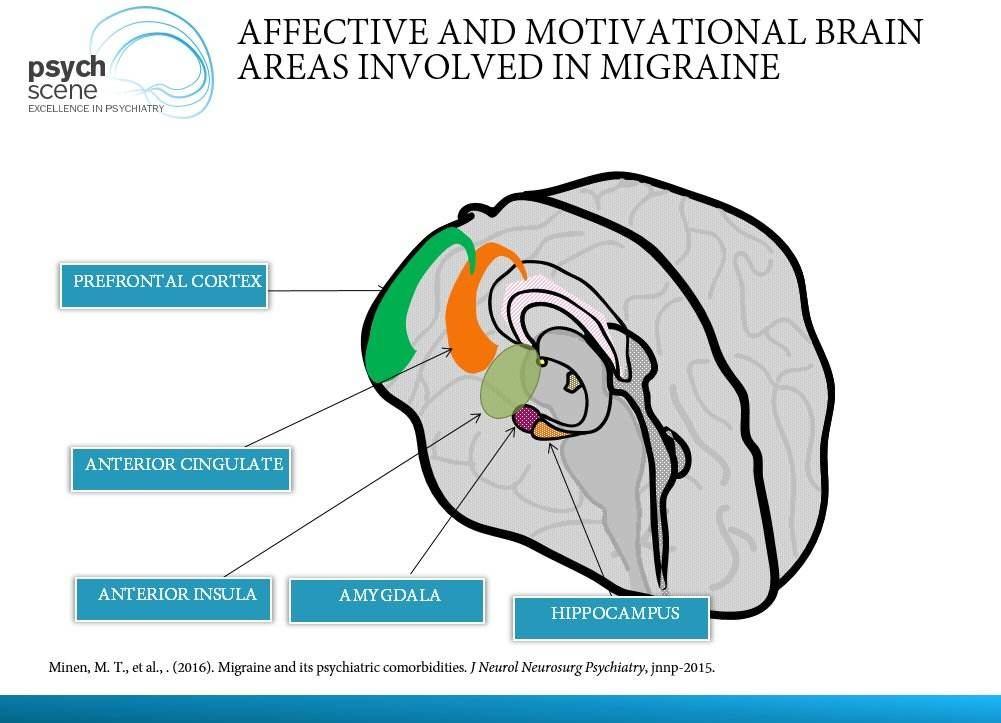 Depression, anxiety, and bipolar disorder have a bi-directional relationship with migraines and can increase the risk of chronification if left untreated.

Bipolar II disorder is associated with a higher risk of developing migraines. [13].

Bipolar disorder with migraine is thought to be a distinct subtype with a rapid cycling course, a greater prevalence in women, increased panic attacks, and an earlier age of onset. [14]

A trend in the research does show that migraines with aura are associated with suicide ideation, and this comorbidity is independent of depressive symptoms.[15], [16]

Migraine is more prevalent in patients with a history of physical, emotional, and sexual abuse. Recent studies suggest that this relationship is mediated by the development of PTSD.

Studies show that the association between migraine and substance abuse is predominantly mediated by psychiatric co-morbidities.

The relationship between migraine and psychiatric co-morbidities is likely to be complex involving the HPA axis, pain pathways, and multiple neurotransmitter pathways.

At present, non-specific drugs such as analgesics and NSAIDs are commonly used with almost 50% of these being non-prescription OTC medications (e.g. aspirin, paracetamol, and ibuprofen). [17], [18]

An appropriate preventative strategy can effectively lower the frequency of migraines as well as help prevent the severity of migraines when they occur.

Valproate sodium is effective in the prevention of migraines in bipolar disorder.

Neuromodulation is a novel approach for the treatment of chronic migraines. It involves the delivery of electrical or magnetic stimulation to specific neural circuits in the brain. As a non-pharmacological treatment option, neuromodulation can avoid adverse drug reactions that are associated with medications.

Central neuromodulation techniques (transcranial magnetic stimulation and transcranial direct current stimulation) have not been studied sufficiently and hence we will focus on the peripheral techniques.

Targeted neuromodulation of the occipital nerve and visual cortex have previously been shown to be an effective therapy for the treatment of chronic cluster headaches.

Chronic migraine is a complex and disabling disorder that has a poorly understood pathophysiology.

Current therapeutic options are inadequate however research is ongoing and it is hoped that the near future will bring novel therapeutics with greater efficacy.

Sjaastad O and Vincent M. Indomethacin responsive headache syndromes: chronic paroxysmal hemicrania and Hemicrania continua. How they were discovered and what we have learned since. Funct Neurol. 2010.

12. The role of intracranial hypertension in the chronification of migraine.

De Simone R and Ranieri A. The role of intracranial hypertension in the chronification of migraine. Neurol Sci. 2015.

15. Headache and major depression: is the association specific to migraine?

16. Migraine and suicidal ideation in adolescents aged 13 to 15 years.

17. Pattern of diagnosis and acute and preventative treatment for migraine in the United States

Diamond S et al., Pattern of diagnosis and acute and preventative treatment for migraine in the United States: results from the American migraine prevalence and prevention study. Headache. 2007.

18. Migraine prevalence, disease burden, and the need for preventive therapy.

20. Migraine attack treatment: a tailor-made suit, not one size fits all.

23. nabotulinumtoxinA for treatment of chronic migraine: pooled results from the double-blind, randomized, placebo-controlled phases of the PREEMPT clinical program

25. Unmet clinical needs in chronic migraine: rationale for study and design of COMPEL, an open-label, multicenter study of the long-term efficacy, safety, and tolerability of onabotulinumtoxinA for headache prophylaxis in adults with chronic migraine

Blumenfeld A et al., Unmet clinical needs in chronic migraine: rationale for study and design of COMPEL, an open-label, multicenter study of the long-term efficacy, safety, and tolerability of onabotulinumtoxinA for headache prophylaxis in adults with chronic migraine. BMC Neurol.