Lithium’s Mechanism of Action – A Focus on Neuroprotection

Bipolar disorder, also known as manic-depressive illness, is an illness characterised by periods of recurrent depression and mania. As bipolar disorder progresses, the time between episodes gradually gets shorter (kindling phenomenon) with increasing functional impairments as well as increased suicide and hospitalisation rates.

Patients with bipolar disorder have higher rates of medical co-morbidities, attempted and completed suicide and higher rates of mortality resulting in a lower life expectancy compared to the general population.

Studies show that there are serial neuroanatomical changes that are associated with gradually worsening symptoms and treatment resistance. Although neuroimaging data is inconsistent, bipolar symptoms appear to be associated with decreased cortical and subcortical structures in addition to increases in the lateral ventricular volume.

Current treatments for bipolar disorder include antipsychotic medications, mood stabilisers and antidepressants. Lithium has compelling evidence in the treatment of mania, acute bipolar depression and prophylaxis in bipolar disorder.

A meta-analysis by Geddes et al., showed that Lithium therapy reduces the overall risk of relapse in bipolar disorder by 40-61% and its effectiveness in preventing manic episodes is greater than for depression. (40% vs. 22%). [1]

A real-world effectiveness study in a Finnish cohort of 18018 patients found that lithium use was associated with the lowest risk of rehospitalisation because of mental or physical illness compared to antipsychotics or other mood stabilisers.

Lithium also has anti-suicidal properties. The seminal study by Cipriani et al., showed that Lithium reduces the risk of death and suicide by 60% and the risk of self-harm by 70%. [2]. The lead author Cipriani updated this by carrying out a meta-review of all systematic reviews and meta-analyses of RCTs of lithium and suicide and self-harm published between January 1980 and June 2017. The authors state-

The evidence to date is overwhelmingly in favour of lithium as an antisuicidal agent, even balanced against any potential disadvantages of its use in regular clinical practice…..Given this evidence, however, the use of lithium is still underrepresented in clinical practice and should be incorporated more assertively into current guidelines.

Evidence also suggests that starting Lithium early in the course of the disorder reduces the rate of treatment non-response. Despite the benefits, Lithium use amongst clinicians is declining.

Despite abundant evidence regarding the efficacy of lithium and its effectiveness in the treatment of bipolar disorders, its use is declining at the beginning of the 21st century. It is of paramount importance to keep reminding psychiatrists and educating physicians about the unique properties of lithium and about monitoring patients treated with lithium, since it has been suggested that lithium should once again become the first-line treatment for bipolar disorders. (Zivanovic, 2017) [3]

SOME KEY POINTS ABOUT LITHIUM 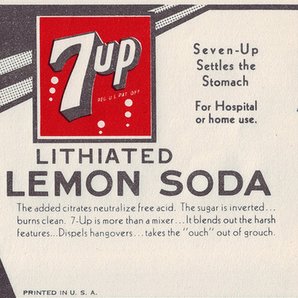 For a detailed description of Lithium’s mechanism of action along with a visual guide click here.

MAIN SIDE EFFECTS OF LITHIUM

THE NEUROPROTECTIVE EFFECT OF LITHIUM

Researchers from the School of Medicine at Deakin University, the School of Psychological Sciences at Monash University and the Melbourne Neuropsychiatry Centre at the University of Melbourne wanted to examine whether lithium was a better neuroprotective agent than quetiapine following a first episode of mania. [5]

This study involved a cohort of patients with acute first episode mania with psychotic features (n=26) who had been stabilised after a first episode of mania with a combination of lithium and quetiapine. Individuals were then randomly assigned to either lithium (n=20 and a serum level of 0.6 mmol-1) or quetiapine (n=19 and up to 800 mg per day) monotherapy for 12 months.

In response to treatment over time, white and grey matter volume changes were determined using MRI data acquisition after 3 months and 12 months.

Clinical assessments were also carried out at baseline and then every 2 weeks for the first month and then every 3 months over the following year. Assessments included the Clinical Global Impression Scale in BD; the Montgomery-Asberg Rating Scale for depressive symptoms; YMRS for manic symptoms; and the Brief Psychiatric Rating Scale for severity of psychotic symptoms.

This study began by determining whether all patients were clinically stabilised after the first episode of mania (with psychotic symptoms) with subsequent treatment with lithium and quetiapine.

The data showed that co-treatment with lithium and quetiapine was successful and that all patients were stabilised at baseline before commencing lithium or quetiapine monotherapy.

Structural MRI showed that all patients had a reduced regional grey and white matter volume in the cortex and the cerebellum at baseline when compared to controls.

After 12 months, the researchers observed that lithium treatment significantly helped to preserve white matter volume when compared to quetiapine treatment. However, both treatment groups had no such effect on grey matter volume changes.

The research group had also shown (published in British Journal of Psychiatry) [6] that in people (61 randomised people) with first episode mania treated with a combination of lithium and quetiapine, continuation treatment with lithium rather than quetiapine is superior in terms of mean levels of symptoms during a 1 year evolution.

This study supports the use of lithium as a neuroprotective agent in the treatment bipolar disorder. This study also showed the benefits of Lithium treatment early in the course of treatment.

According to the authors –

Post hoc testing showed that lithium was more effective than quetiapine in slowing the progression of white matter volume reduction as suggested by the difference score in white matter estimates between baseline and 12 months only but not after 3 months.

The duration of lithium treatment in this study is worth considering as it points to an effective cessation of white matter loss during the first 3 months and a subsequent normalisation of this effect to similar rate to that expected in control subjects.

This challenges several guidelines that advocate for lithium use later in the course of the illness.

STRENGTHS AND LIMITATIONS OF THE STUDY

This study has a small sample size due to the low incidence of first-episode mania patients available at the time of study. As such, the cohort of patients in this study included those with bipolar disorder and schizoaffective disorder.

Since most patients had psychotic symptoms at baseline, this data cannot be extrapolated to non-psychotic individuals.

Drop out rates were high (approx 30%) leading to attrition bias.

Recent advances in neuroimaging analyses have allowed researchers to quantify structural changes in the brain with significant improvements in the acquisition and visualization of imaging data.

The hyperintensities viewed on T2-weighted brain MRI images have also been correlated to cognitive and behavioral dysfunction in the ageing brain as well as in some cases of bipolar disorder [7].

Neuroimaging reports suggest that the location and presence of WMHs is indicative of the disruption in white matter microarchitecture and the observed symptoms in patients with bipolar disorder. 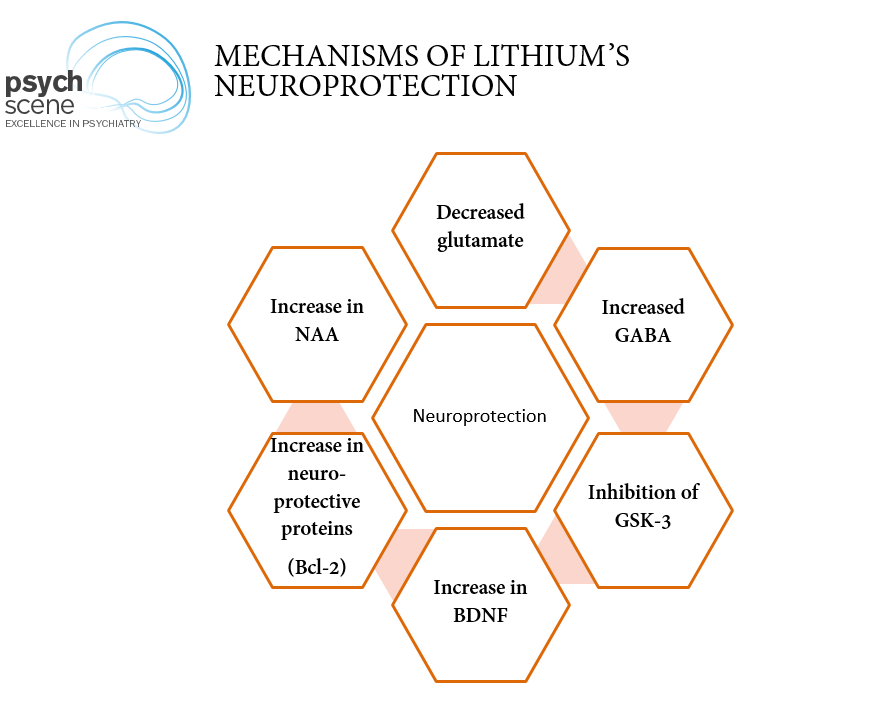 All the above mechanisms reflect in larger brain volumes of key areas that regulate cognition and emotions. 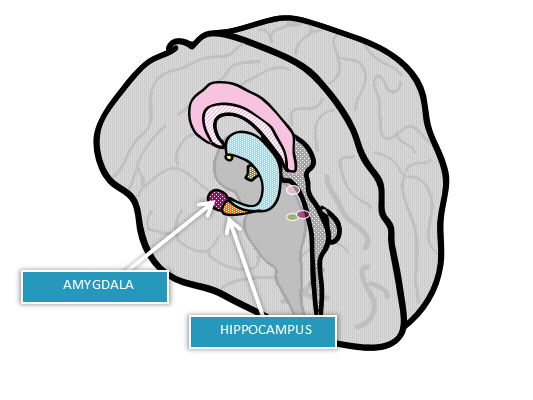 Read a Visual Guide on Lithium’s Mechanism of Action.

Ask not what lithium can do for you- ask what you can do for lithium!

Having in mind the exceptional properties of this magic ion, a question comes to mind: Will lithium once more become the gold standard, the treatment of choice and the real first line drug in the treatment of bipolar disorders? It’s up to us. (Zivanovic, 2017)

Read a Visual Guide on Lithium’s Mechanism of Action.

Loading Lithium’s Mechanism of Action – A Focus on Neuroprotection

8. Neuroprotective effects of lithium: Implications for the treatment of Alzheimer’s disease

9. Myelin vs axon abnormalities in white matter in bipolar disorder