This article is based on the talk by Dr Yasir Abbasi at RCPsychIC 2019. Dr Yasir Abbasi is a Consultant Psychiatrist and the Clinical Director for Addiction Services at Mersey Care NHS Foundation Trust and an Honorary Senior Lecturer at the University of Liverpool. He is recognised by the General Medical Council as a dual specialist in General Adult and Substance Misuse Psychiatry.

1. The question many ask is whether we take more risks online compared with real life. Also, does technology makes us more anti-social, or is that a consequence of human behaviour towards technology? It may be necessary to investigate this on a more societal level, regarding how we interact and engage with these innovations. (See our previous article on social or anti-social media)

2. Mary Aitken describes the online disinhibition effect in her book, ‘The Cyber Effect’, [Aitken M, 2016] – an individual feels bolder and safer but has impaired judgement due to the safety of being in a familiar environment.

3. Through the creation of The Social Avatar, one can facilitate shifts in personal identity. [Aboujaoude, E. (2012)]. 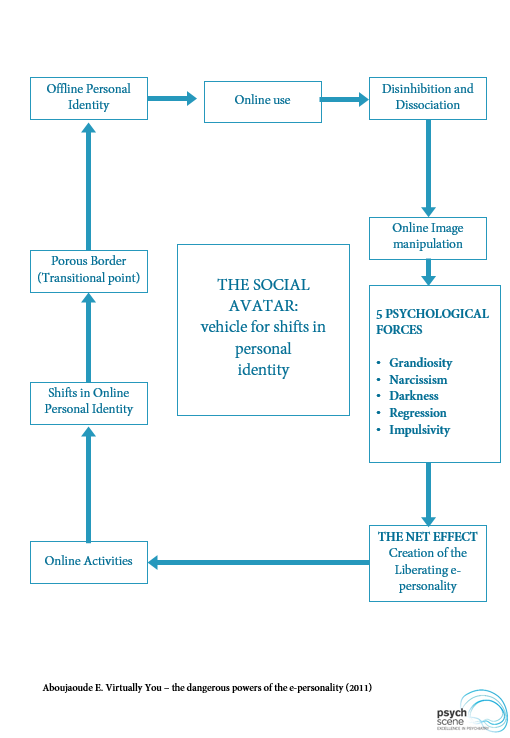 The Neurobiology of Addiction

4. Addiction is a chronic relapsing brain disease, and the incentive-sensitisation theory explains how neural changes occur during repeated substance use, which then impacts neural substrates underlying reinforcement and motivation.[Berridge K & Robinson T, (2016)]

5. It is the move from ‘liking’ something (mediated by several hedonic hotspots scattered in the limbic prefrontal cortex, in orbitofrontal and insula regions and subcortical structures like NA and Ventral pallidum) to ‘wanting’ something which is mediated by the mesolimbic system. (Learn how substance use moves from habit to compulsion)

Acccording to the incentive-sensitization theory of addiction ‘wanting’ may grow over time independently of ‘liking’ as an individual becomes an addict, due to sensitisation of brain mesolimbic systems.

The ‘liking’ system comprises a collection of interactive hedonic hotspots, and this hedonic circuitry may be shared by diverse pleasures ranging from sensory food and drug pleasures to human cultural and social pleasures. The pleasure-generating hotspots are anatomically tiny, neurochemically restricted, and easily disrupted – perhaps a reason why intense pleasures are relatively few and far between in life compared to intense desires. 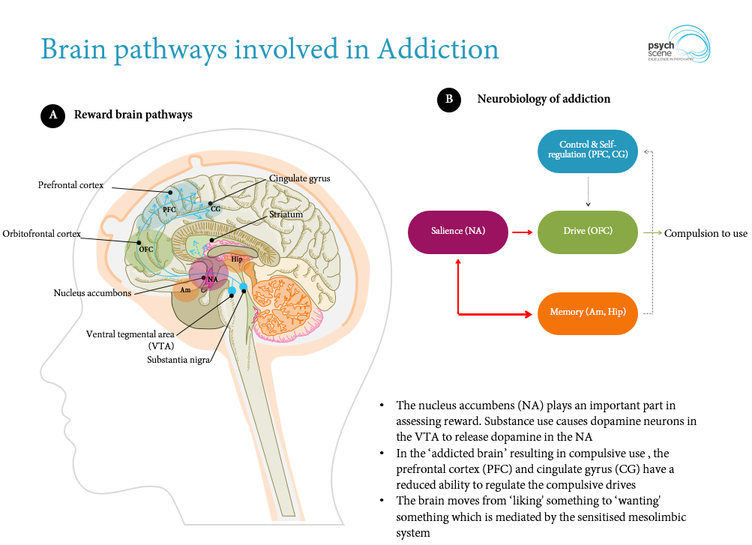 The Increase of Social Media Use

8. A global economic view on tech-based activities reveals a $92 billion market in 2015, which increased to $113 billion by 2018 ,with 50% of the market in the USA and China. Other trends show that we are moving towards online platforms for purchases such as shopping, books, and travel.

10. Real-world acceptance and rejection are often ambiguous and open to self-interpretation, and online feedback for self-esteem can have adverse effects on young people.

11. Symptoms of social media addiction have been reported to be similar to substance abuse disorders i.e. social anxiety, depression and the exhibition of withdrawal symptoms [Bányai et al, 2017]. It is already known that problematic social media use can have negative outcomes on academic and work performance as well as interpersonal relationships.

12. Social media or Social Networking Sites (SNS) addiction is not listed in the Diagnostic and Statistical Manual of Mental Disorders, 5th edition, (DSM-V) or the International Classification of Diseases, 11th edition. Therefore, caution is advised as substantial evidence is not currently available

13. Engagement in excessive social networking has been suggested to be mediated by the fear of missing out (FOMO), smartphone addiction, and nomophobia (an irrational fear of being without your mobile phone) [Bragazzi and Del Puente 2014], [Oberst et al, 2017].

14. These specific constructs may help to explain the link between SNS addiction and its psychopathological consequences, however, the causal relationship between these constructs and an established theoretical model requires further study.

Liking, wanting, and the incentive-sensitization theory of addiction

Marijuana craving in the brain.

The relationship between addictive use of social media, narcissism, and self-esteem: Findings from a large national survey.

Negative consequences from heavy social networking in adolescents: The mediating role of fear of missing out.

Oberst U et al., Negative consequences from heavy social networking in adolescents: The mediating role of fear of missing out. J Adolescence. 2017;55:51-60.

Rate this psychinsights
Number of Views: 5,380