Modafinil is a synthetic non-amphetamine stimulant approved for the first-line treatment of excessive sleepiness (ES). [Mignot, 2004]

Modafinil is a racemate, with the two enantiomers conferring approximately equipotent effects on the brain, although the R-isomer has a different pharmacological profile:

Armodafinil, like modafinil, is also a wakefulness promoter indicated for ES associated with narcolepsy, SWSD, and res-OSA.

However, it is important to note that in 2011 the European Medicines Agency removed the SWSD and res-OSA indications and restricted modafinil to the treatment of narcolepsy.

The wake-promoting pharmacological profile of modafinil is notably different from other psychostimulants such as amphetamine and methylphenidate, with studies suggesting a complex profile of neurochemical and behavioural effects. [Ballon and Feifel 2006] 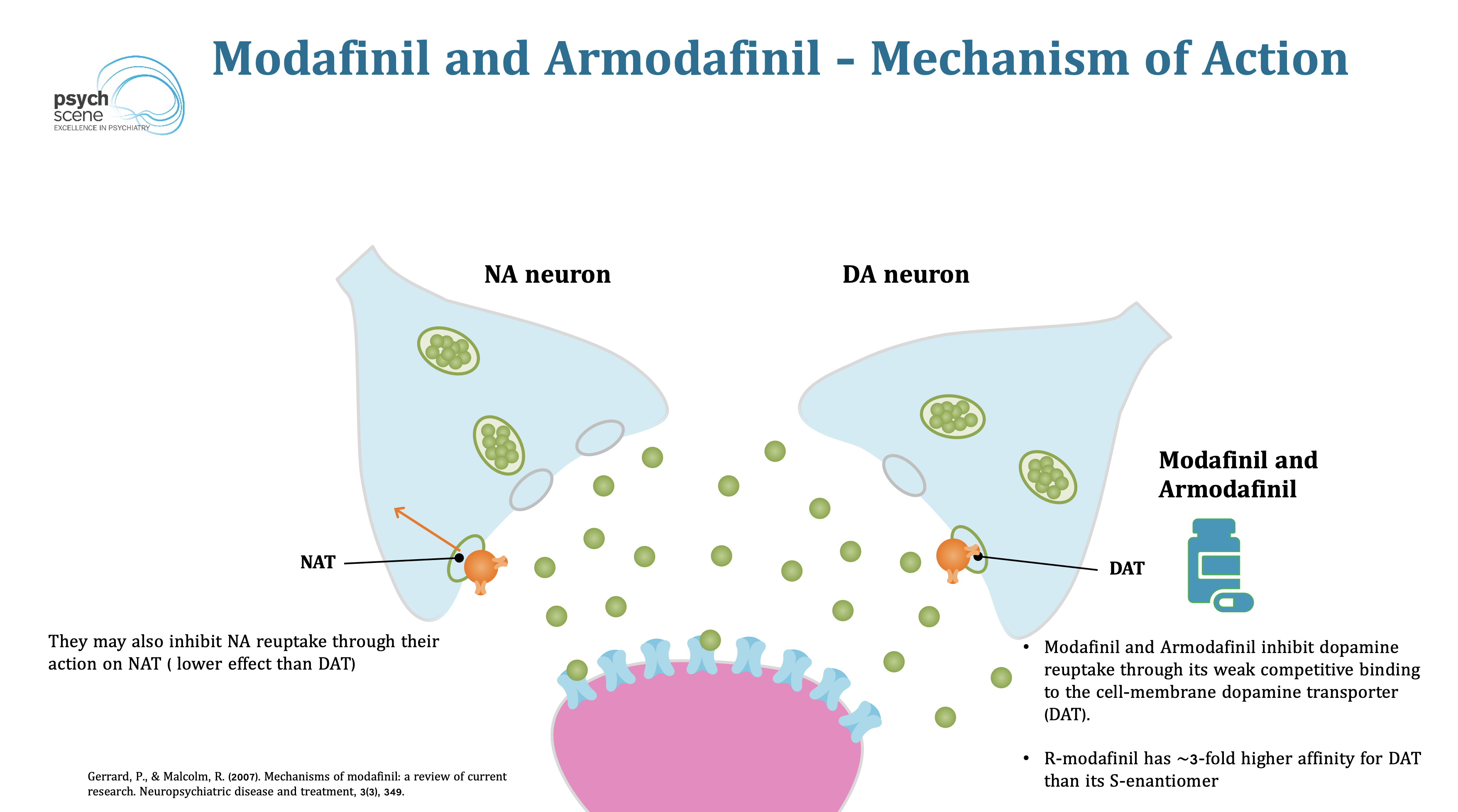 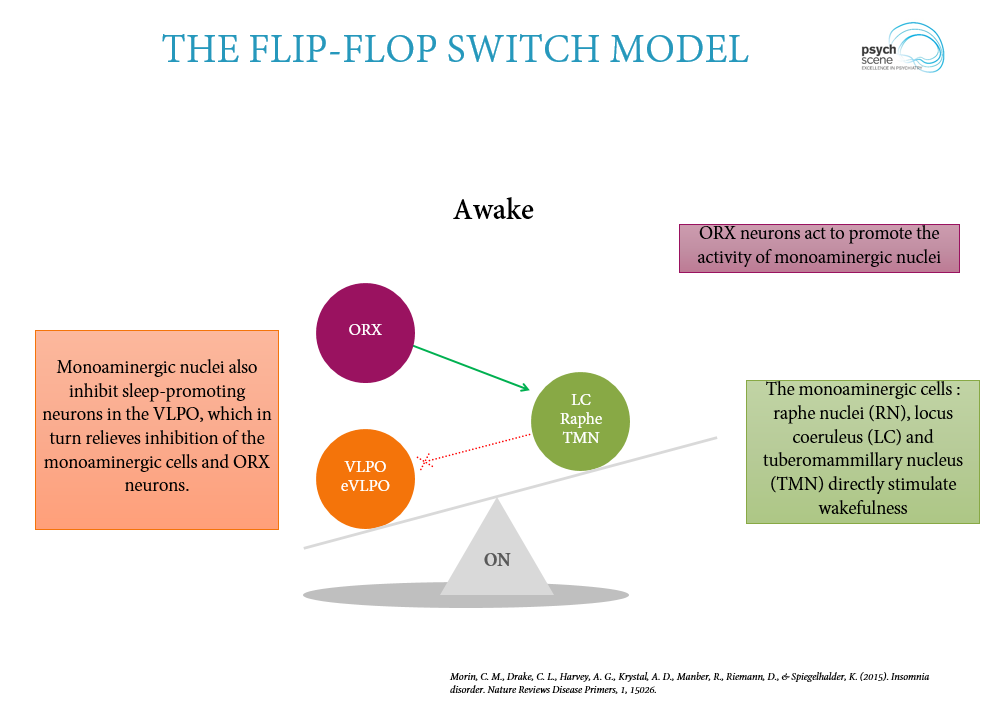 Modafinil is readily absorbed and has dose-dependent pharmacokinetics between 200 mg and 600 mg, reaching peak plasma concentrations 2–4 hours after dosing. The starting dose is 200 mg PO (dosed in am), with steady-state occurring after 2–4 days. [Robertson and Hellriegel 2003]

Modafinil has been observed to have variable wakefulness-promoting effects throughout the day with a once-daily dose of 200 mg. As such, some patients may require a 400 mg or a 600 mg split dose of modafinil to alleviate ES later in the day.

Interestingly, armodafinil at 200 mg can maintain wakefulness later in the day due to its long elimination half-life. [Dinges et al. 2006] 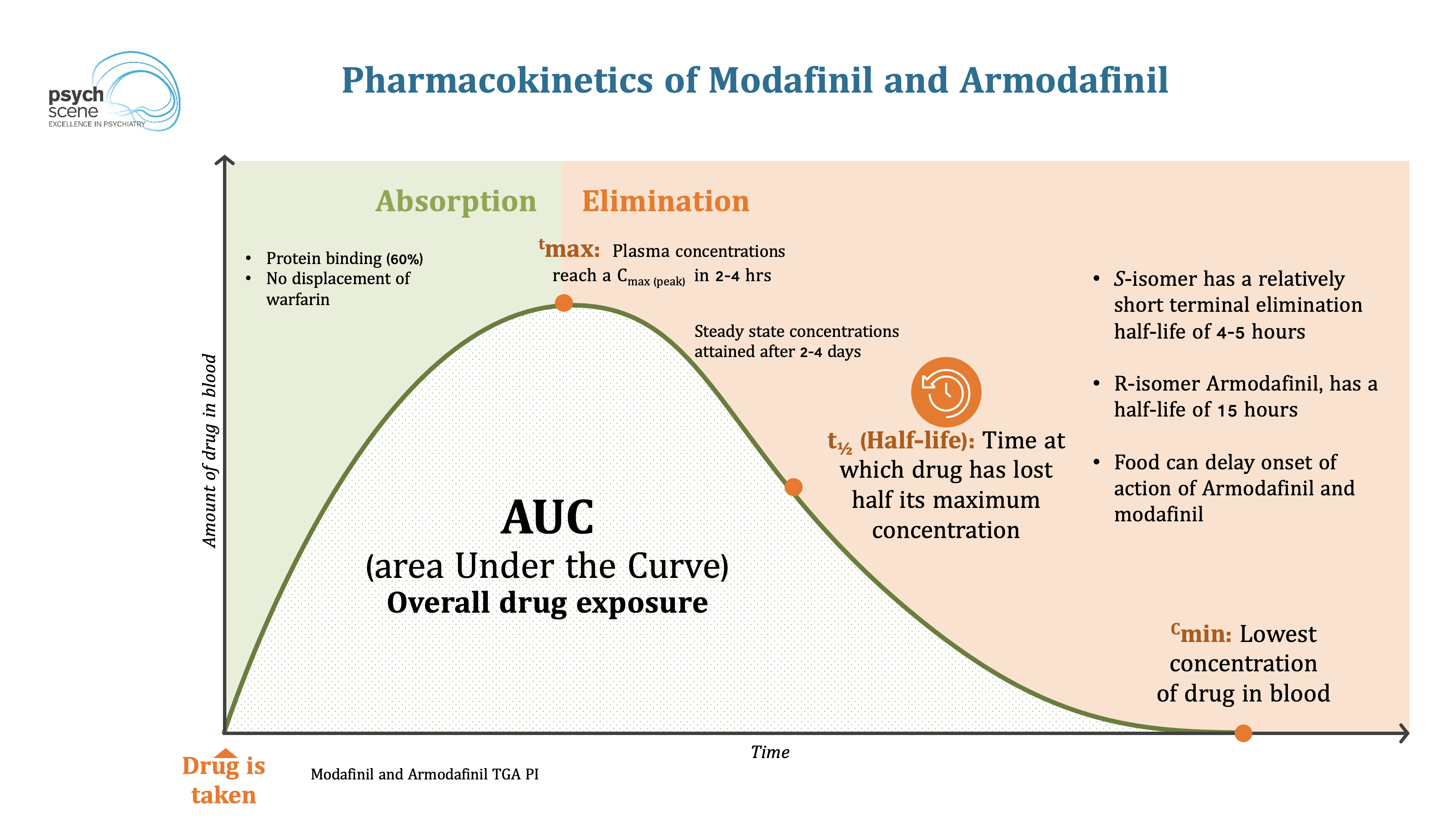 Modafinil and armodafinil are well tolerated, with most adverse events classified as mild or moderate in severity. The most common adverse events (≥5%) reported in randomized controlled trials are: [PROVIGIL package insert]

When comparing modafinil 200, 300, and 400 mg/day, headache and anxiety were dose-related.

Serious rash requiring hospitalisation and discontinuation of treatment has been reported in adults in association with the use of Modafinil and Armodafinil.

Clinicians should exercise caution in giving modafinil to patients with a history of psychiatric disorders, including psychosis, depression, mania, major anxiety, agitation, insomnia or substance abuse.

It has been reported that there is abuse and dependency potential with modafinil. Although this has not been investigated for armodafinil, it is likely to be similar to modafinil. Although it is important to state that this potential is lower in comparison with amphetamine-like stimulants. [Myrick et al. 2004]

Cardiac evaluation and blood pressure should be monitored.

Patients with a history of substance use should be closely monitored as modafinil and armodafinil produce psychoactive and euphoric effects and feelings consistent with other scheduled CNS stimulants.  (methylphenidate or dexamphetamine).

Modafinil has displayed some interactions in vitro with the CYP isoenzyme system, although it is less apparent in vivo. Of note, modafinil exerts a reversible inhibition of CYP2C19 as well as a concentration-dependent induction of CYP1A2, CYP2B6, and CYP3A4. [Robertson et al. 2000]

It has also been shown that there is also a small degree of CYP2C9 activity inhibition.

Interestingly, armodafinil (250 mg/day) does not induce CYP1A2. However, it does moderately induce CYP3A4 and moderately inhibits CYP2C19. [Darwish et al. 2008]

The pharmacokinetics of CYP3A4 (e.g., midazolam, ciclosporin, triazolam, and steroidal contraceptives) and CYP2C19 (e.g., diazepam, omeprazole, and phenytoin) may be affected if co-administered with armodafinil.

Due to the potential for the concurrent administration of modafinil/armodafinil and methylphenidate, interactions studies have been performed, with one study showing a significant increase in the Cmax for modafinil [Wong et al. 1998]; however, it was suggested that this interaction had no clinical significance (the same lack of significance is suggested for armodafinil).

Please read our detailed article on pharmacogenomics with tables of medications that affect CYP enzymes in psychiatry.

Modafinil and Armodafinil are evidence-based in the treatment of:

Modafinil and its longer-acting R–isomer, armodafinil, are effective psychostimulants that improve wakefulness although they do have different pharmacokinetic profiles. Their action on the wakefulness pathways help in the treatment of sleep disorders such as Narcolepsy, OSAHS and Shift work disorder.

Additionally, through their inhibitory action on DAT, they increase dopamine (similar to Bupropion albeit at a lower potency) which makes them useful as an adjunct in the management of treatment-resistant depression and bipolar depression.

An update on the pharmacotherapy of excessive daytime sleepiness and cataplexy

Mignot E An update on the pharmacotherapy of excessive daytime sleepiness and cataplexy. Sleep Med Rev. 2004;8(5):333–338.

A systematic review of modafinil: Potential clinical uses and mechanisms of action

Modafinil: a review of neurochemical actions and effects on cognition

Minzenberg M and Carter C. Modafinil: a review of neurochemical actions and effects on cognition. Neuropsychopharmacology 2008;33:1477–1502.

Armodafinil in the treatment of sleep/wake disorders.

Mechanisms of modafinil: a review of current research

A double-blind, placebo-controlled, ascending-dose evaluation of the pharmacokinetics and tolerability of modafinil tablets in healthy male volunteers

Interaction profile of armodafinil with medications metabolized by cytochrome P450 enzymes 1A2, 3A4 and 2C19 in healthy subjects

[Gélineau syndrome in a patient with renal transplantation. Evidence of cyclosporine-modafinil interaction]

Interaction of modafinil and clomipramine as comedication in a narcoleptic patient

A review of psychostimulants for adults with depression.

Efficacy and safety of adjunctive armodafinil in adults with major depressive episodes associated with bipolar I disorder: A randomized, double-blind, placebo-controlled, multicenter trial

An open-label trial of modafinil augmentation in patients with partial response to antidepressant therapy.

Cognitive enhancers in the treatment of substance use disorders: clinical evidence

Mechanisms of modafinil: A review of current research

Modulation of fronto-cortical activity by modafinil: a functional imaging and fos study in the rat

Gozzi A et al., Modulation of fronto-cortical activity by modafinil: a functional imaging and fos study in the rat. Neuropsychopharmacology. 2012;37(3):822–837.