Minocycline as Adjunctive Treatment in Depression

Dysregulation of the immune system is implicated as an etiological factor in the pathogenesis of depression. Evidence suggests that individuals that develop depression in the context of inflammation may constitute a distinct subtype. [1]

The role of the immune system may also explain the association between stress, depression and heart disease.

Therefore, drugs that modulate the immune system have gained attention in the treatment of depression. Recently published meta-analyses have shown there is support for the use of compounds such as infliximab (monoclonal antibody used in autoimmune diseases), celecoxib (NSAID used in rheumatoid arthritis), aspirin (common pain relief with potential immunotherapy properties), and N-acetylcysteine (a modified amino acid that is purported to have antioxidant properties). [2], [3] 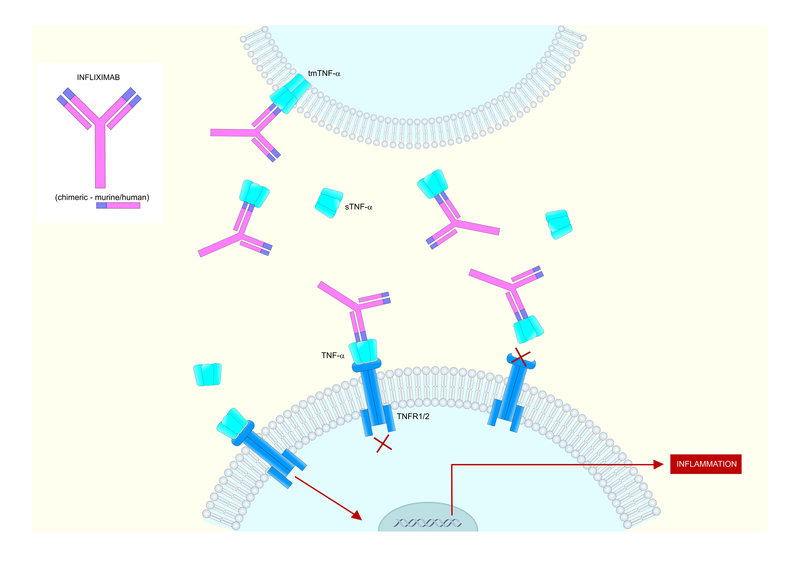 Infliximab binding to TNF-alpha inhibiting the binding of TNF-alpha to its receptors preventing the downstream inflammatory cascade.

Minocycline is a tetracycline antibiotic that has also been shown to have a secondary action on the immune system due to its antimicrobial activity.

Activation of microglia by peripheral inflammatory signals results in an inflammatory cascade leading to oxidative stress, excitotoxicity, apoptosis and demyelination

Data shows that interleukin 1B, TNFα, prostaglandin-E2 and cyclooxygenase-2 (COX-2) are all reduced or inhibited after minocycline treatment. [4], [5]

Moreover, evidence shows that minocycline has also been shown to have antidepressant effects when used in combination with other traditional antidepressants as well as being demonstrated to have efficacy in cases of psychotic depression and schizophrenia. [6], [7]

In light of this, researchers from Deakin University and the Universities of Melbourne and Sydney collaborated on a multi-site randomised placebo-controlled clinical trial for the adjunctive therapy of moderate-severe depression with minocycline. [8]

Quality of life of patients during the length of the trial was assessed using the  Quality of Life Enjoyment and Satisfaction Questionnaire (Q-LES-Q), Social and Occupational Functioning Scale (SOFAS) and the Range of Impaired Functioning Tool (LIFE-RIFT).

Primary and secondary outcomes were analysed using mixed models, repeated measures (MMRM) analysis of covariance (ANOVA) split-plot in time and this was based on all patients having being tested at least once.

Depression was also shown to be chronic across all 71 patients with a mean duration of 14 years, and co-morbid anxiety was evident in 42% of patients.

MADRS – MADRS scores were not significantly different between the groups at treatment endpoint (week 12) or during follow-up (week 16). However, although this was not significant, the minocycline treatment group did show a mean (SD) 4-point difference (15.8 (10.6)) compared to placebo (19.8 (9.8)) at week 12.

Clinical Global Impression-Improvement (CGI -I) – The mean (SD) CGI-I was significantly different between the groups at week 1. Data analysis showed a CGI-I score of 3.2(1.2) in the placebo group and 2.2(1.3) in the minocycline group at week 12. This significant difference in CGI-I was also maintained at follow-up at week 16.

Patient Global Impression – The mean (SD) PGI score was not significantly different after 12 weeks however at follow-up on week 16, there was a statistically significant difference (p=0.017). At week 16, the placebo group was measured to be 3.3 (1.2) whereas the minocycline adjunctive therapy group was 2.3 (1.3).

Adverse Events – Adverse events that were recorded during the trial included pain, rash, nausea, dizziness and heartburn. However, there were no significant differences in side effects between the placebo group and the minocycline adjunctive therapy group across the duration of the study.

This is the first randomised controlled trial that has studied adjunctive minocycline therapy for moderate-severe depression. Although the primary outcome was not significant the 4-point difference is in line with previous data when measuring the effect size of traditional antidepressants.

Therefore, these observations, in conjunction with several of the secondary outcomes that were significant, including quality of life and functioning scales, supports the conclusion that adjunctive minocycline therapy produces an overall improvement in clinical outcomes.

The small sample size reduces the power of the study which may explain the lack of significance observed with MADRS.

Global improvements observed, therefore, may be due to other effects rather than an improvement in ‘core’ depressive symptoms.

Besides, the patient cohort used in this trial had a high rate of comorbid anxiety as well as a high rate of melancholia. This may limit generalisability of findings to other sub-types of depression.

The patients enrolled in this trial had chronic depression and reported a long duration of illness.

Although the primary MADRS outcome was not significant, the improvements observed would support the positive impact that adjunctive minocycline therapy had on these patients. Moreover, these effects were shown in just 12 weeks of treatment.

However, the discrepancy between non-significant MADRS scores but significant changes in quality of life and functioning is interesting yet puzzling.

It is possible that minocycline has other unknown effects on the body, which warrants further research into minocycline’s mechanism of action on depressive symptomatology.

Although the primary outcome was not significant, this study helps to show that the pathophysiological mechanisms that underpin depression may include an immune-inflammatory component.

Further research into the role that the immune system plays in depression will help facilitate the development of next-generation antidepressants.

If effective treatment with conventional antidepressants is associated with the attenuation of the inflammatory response, it may be argued that there is little urgency to develop new types of antidepressants that act by mechanisms other than modulating the brain monoamines.

However, there is abundant clinical evidence that the available antidepressants, though largely effective in attenuating the depressed mood state and associated symptoms of anxiety, are far less effective in treating the memory and cognitive dysfunction (fatigue, psychomotor retardation) that commonly affect middle aged and elderly depressed patients.

This not only emphasises the need to develop better antidepressants but also to consider anti-inflammatory drugs as possible candidates. [10]

3. N-acetylcysteine in depressive symptoms and functionality: a systematic review and meta-analysis.

Fernandes B et al., N-acetylcysteine in depressive symptoms and functionality: a systematic review and meta-analysis. Journal of clinical Psychiatry. 2016

4. Inhibitory action of minocycline on release of nitric oxide and prostaglandin E2

7. Efficacy and tolerability of minocycline augmentation therapy in schizophrenia