Recent years have seen a dramatic increase in the use of the synthetic stimulant, methamphetamine, particularly in its crystalline form.

Advances in methamphetamine processing have resulted in a drug that now has a higher average purity (increased from 21% to 64%) and therefore a higher potency.

This increase in purity and potency has resulted in an increased price ($464 to $795 per gram) however the average purity-adjusted price per gram has declined. [1]

Taken together, these increases in purity and potency as well as its favourable pricing, is challenging people’s control of methamphetamine consumption.

This, in turn, has resulted in the rise in methamphetamine-related harm. From a clinical perspective, there is consistent evidence that methamphetamine use is associated with: [2], [3]

A range of psychotic phenomena has been reported in association with MA use, from transient states during periods of intoxication to more persistent syndromes that resemble schizophreniform disorder.

Psychotic features with methamphetamine use have a prevalence of 15-30% in the recreational setting and <60% in some inpatient settings. [4], [5]

Risk factors include the chronicity of methamphetamine use as well as an individual’s genetic susceptibility. (see below)

Moreover, these are also important factors in determining if psychotic symptoms are just transient episodes during methamphetamine use or if it develops into a more persistent psychotic disorder. [6]

Although there is great variability in the literature on what represents a significant risk factor for the development of MAP, a recent systematic review has identified several factors but with varying degrees of consistency: [7]

Furthermore, genetic polymorphisms that are associated with schizophrenia have also been previously suggested to play an important role in the development of MAP. [8], [9]

1.Dysbindin-1 candidate gene (DTNBP1) has been linked to signalling pathways that involve the neurotransmitters, dopamine and glutamate. The DTNBP1 gene has already been shown to be important for synaptic homeostasis and variation in this gene may affect cognitive abilities as well as an individual’s risk of developing schizophrenia.

2. Other genes that have a role in dopamine system function, such as SNCA (alpha-synuclein) or CLN3 and FBP1, have also been implicated in both MAP and schizophrenia.

The DSM-V states that if psychotic symptoms persist for longer than a month, then this is evidence of a persistent primary psychotic disorder.

In the context of MAP, the transition from an initial acute MAP episode to a primary psychotic disorder is estimated as highly likely (19 to 33%). [6]

This estimate is derived from population-based studies examining hospital admissions for psychosis and thus there exists the possibility of misdiagnosis of some of these cases of primary psychotic disorder as MAP.

Methamphetamine intoxication is commonly associated with hallucinations and paranoid delusions, which are not too dissimilar from acute psychosis in cases of schizophrenia. [10]

Visual and tactile hallucinations and particularly formication, the sensation of insects crawling under the skin, are reported to be more common in MAP in comparison to other types of psychoses.

The presence of negative symptoms or first-rank symptoms may correlate with a more persistent type of psychosis that resembles primary psychotic disorders, such as schizophrenia or bipolar disorder.

However, a recently published study has suggested that there is evidence of different subsets of positive psychotic symptoms. [11]

These are differentiated by their symptom patterns, which has been suggested to identify whether an individual will progress to psychosis:

Schneider’s first-rank symptoms are often described as bizarre, and the presence of bizarre thinking has been suggested as a risk factor for the onset of psychosis. [12]

However, bizarre thinking is not a good predictor for schizophrenia as most patients with schizophrenia do not exhibit first-rank symptoms.

Overall, MAP can be considered a heterogenous syndrome however more research into the complex relationship between methamphetamine use, polydrug abuse, specific psychotic symptoms, and comorbid mood disorders is required to identify symptom typologies that may predict the onset of psychosis.

Neuroimaging studies show that dopamine and serotonin networks are affected by methamphetamine use:

In subjects diagnosed with MAP, there are substantial impairments in attentiveness, executive functioning, and processing speed—which is more akin to the symptoms of chronic schizophrenia—in comparison to subjects with no symptoms of psychosis.

As previously discussed, the type of psychotic symptoms may be used as a possible predictor for the onset of psychosis. However, it can similarly be suggested that cognitive deficits are not only a sign of the underlying neurobiological dysfunction but that it can also be compared to the cognitive profile of psychotic disorders. 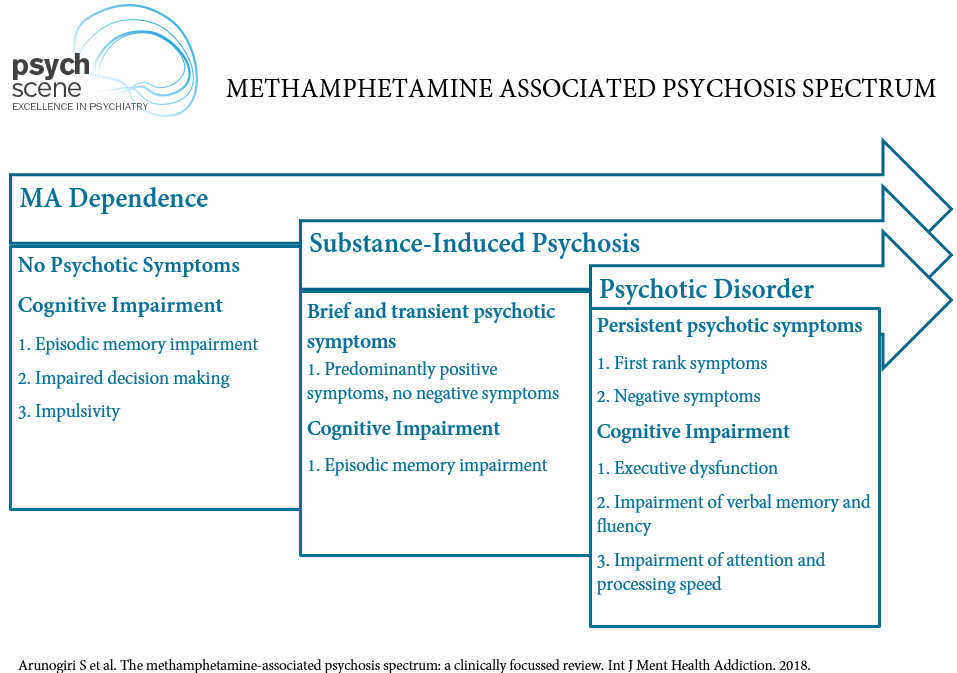 Methamphetamine is a highly addictive psychostimulant and extended use is associated with substantial neurotoxicity with cognitive dysfunction and psychotic symptoms contributing to the increased morbidity and mortality in users.

3. Differences in the symptom profile of methamphetamine-related psychosis and primary psychotic disorders.

4. The risk of psychotic symptoms associated with recreational methamphetamine use.

7. A systematic review of risk factors for methamphetamine-associated psychosis.

8. The dysbindin gene (DTNBP1) is associated with methamphetamine psychosis

12. Predicting the risk of psychosis onset: advances and prospects.

14. Neurocognitive effects of methamphetamine: a critical review and meta-analysis

15. New insights into the mechanism of action of amphetamines.

16. Persistence of psychotic symptoms as an indicator of cognitive impairment in methamphetamine users