In Australia, the legislation for the cultivation and manufacturing of medicinal cannabis came into effect on the 30th of October 2016. Medicinal cannabis products cover many different preparations intended for therapeutic use, which the Australian government regulates through the Therapeutic Goods Administration (TGA) and the Special Access Scheme (SAS).

There are three species of cannabis: Cannabis sativa, Cannabis indica, and Cannabis ruderalis. 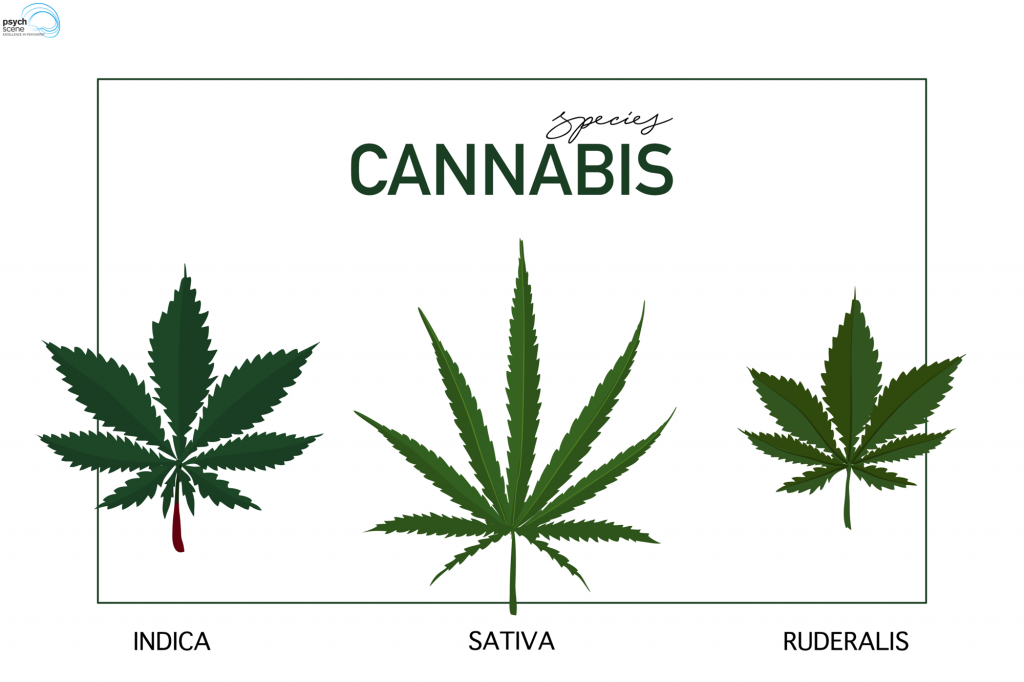 The principal cannabinoid is delta-9-tetrahydrocannabinol (Δ9-THC) and is widely known for its psychoactive effects. Cannabis plants high in Δ9-THC are called marijuana, whereas cannabis plants with high levels of cannabidiol (CBD) and little to no Δ9-THC are known as hemp. CBD has less potent psychotropic effects.

The endocannabinoid system is a ubiquitous lipid signalling system with a broad array of regulatory functions in the body. 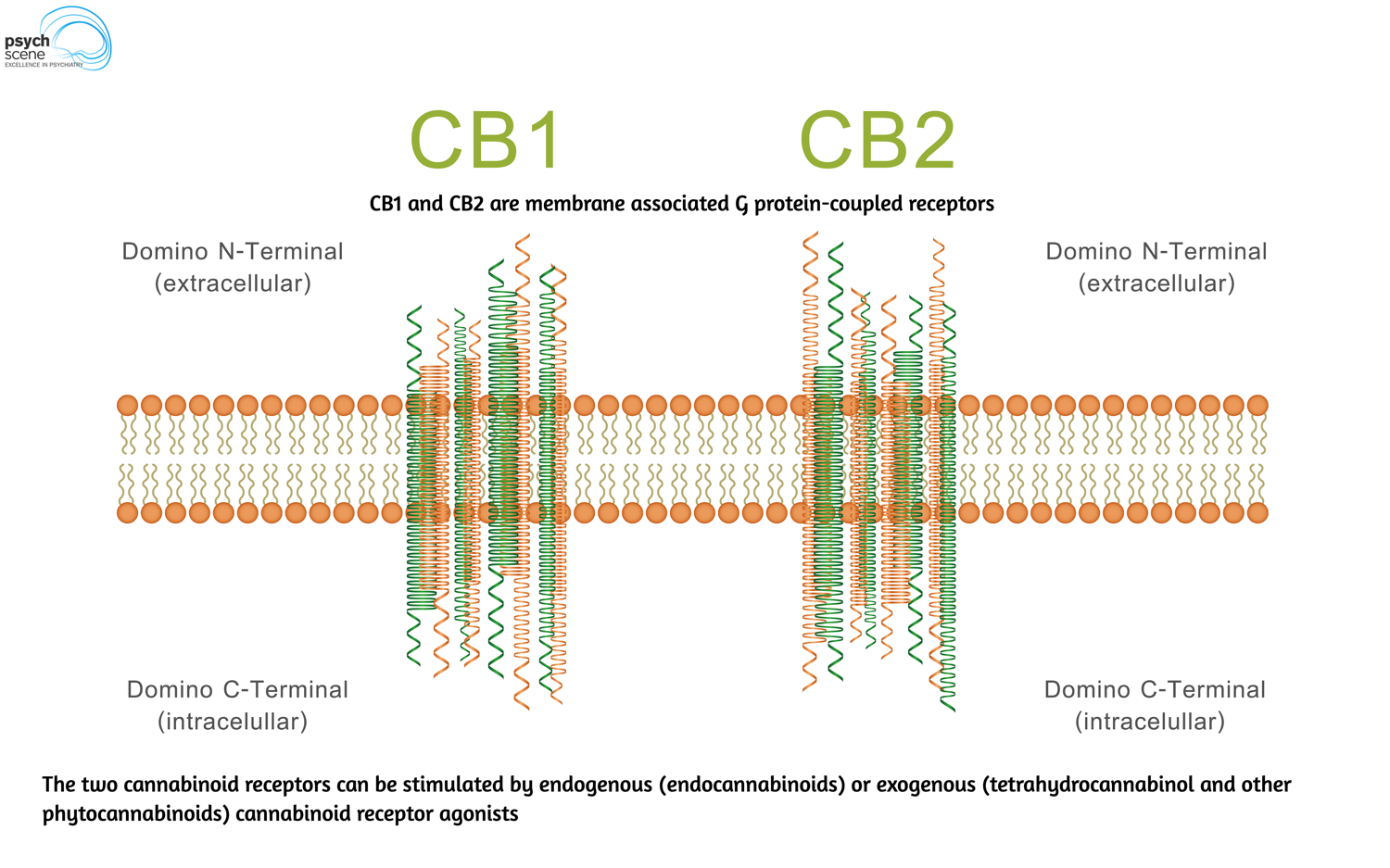 The system consists of the cannabinoid 1 (CB1) and 2 (CB2) receptors and the endogenous signalling ligands, N-arachidonyl-ethanolamide (AEA) and sn-2-arachidonoyl-glycerol (2-AG). 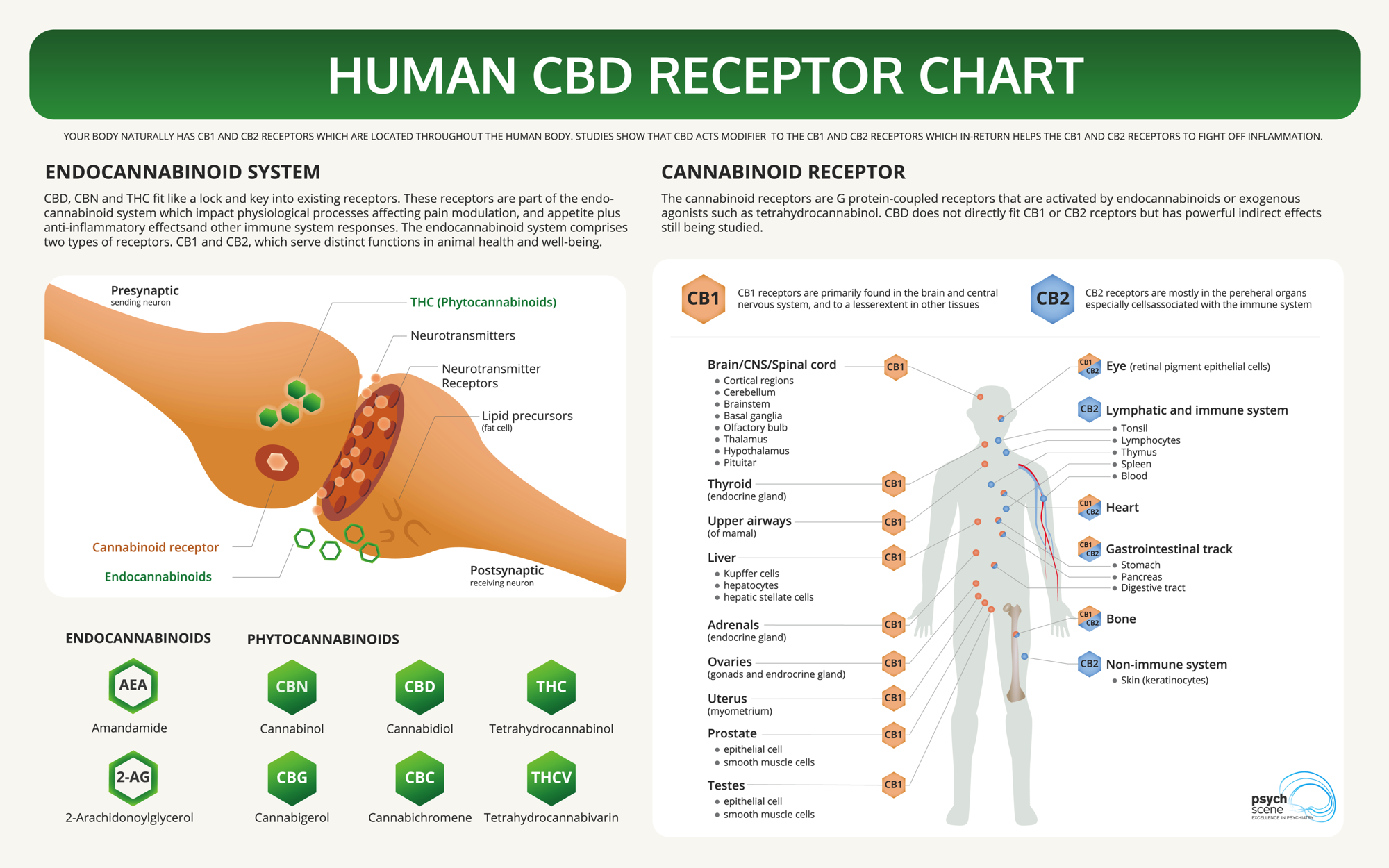 Much of the information on cannabinoid clinical pharmacology has been carried out using the exogenous cannabinoid, Δ9-THC, and its effects during recreational cannabis use.

The cannabinoids studied primarily include Δ9-THC, but there has been some research on CBD, cannabinol (CBN), cannabigerol (CBG), and tetrahydrocannabivarin (THCV): [Pertwee, 2008]

Although THC and CBD act through CB1 and CB2 receptors, several additional pharmacological actions are likely.

Pharmacokinetic information on cannabinoids, however, refers almost entirely to its major constituent, Δ9-THC. It has partial agonist activity at both CB1 and CB2 receptors and has activity at non-CB receptors and other targets throughout the body. [Sharma et al., 2012]

Some products will contain CBD or THC alone as a highly purified active pharmaceutical ingredient (API)- containing formulations, often referred to as isolates. These formulations do not contain other cannabinoids, terpenes or flavonoids.

Other products contain CBD and/or THC with a full spectrum of cannabis plant constituents, including other phytocannabinoids (e.g. cannabichromene, cannabigerol, ∆9-tetrahydrocannabinolic acid or cannabidiolic acid) as well as terpenes and flavonoids, all of which may have therapeutic effects.

To ascertain precisely what the medicinal cannabis product contains, a request can be made to the manufacturer for a certificate of analysis.

Therapeutic daily doses of CBD are typically between 50 mg and 1500 mg, which are greater than those for THC, which are between 5 mg and 20 mg.

The only cannabis-based medicines registered by the Australian TGA are Nabiximols (Sativex) and CBD (Epidyolex).

Other cannabis medicines that have been registered by regulators outside of Australia, but are not registered in Australia, include:

Interaction with the CB1 receptor has a modulating effect on 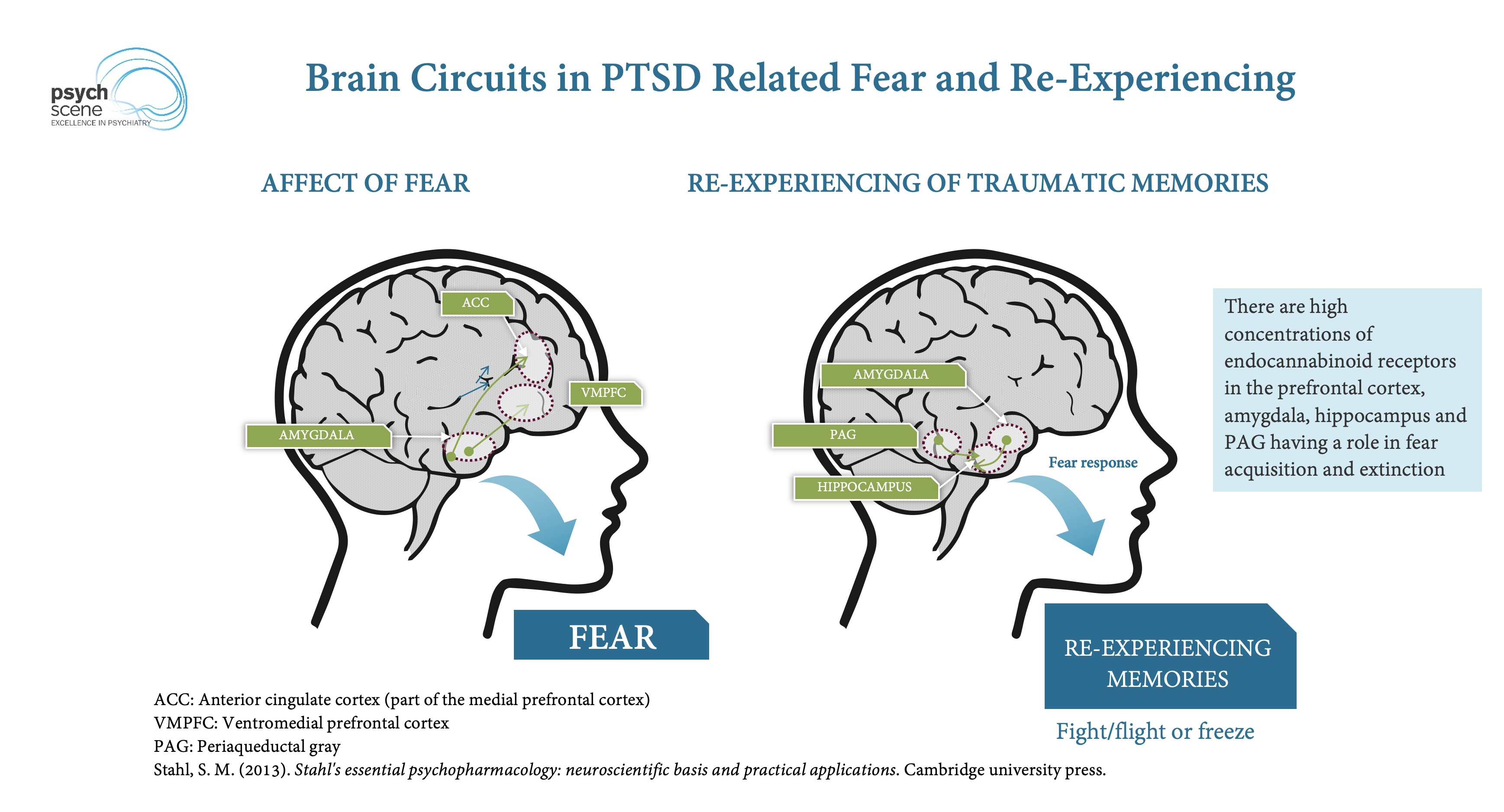 A small retrospective study of 80 patients analysing PTSD symptoms identified a greater than 75% reduction in Clinician-Administered Posttraumatic Scale for DSM-IV (CAPS) symptom scores when patients with PTSD were using cannabis compared to when they were not. Further studies are ongoing. [Greer et al., 2014]

While few clinical studies have specifically evaluated cannabis-drug interactions, most studies have investigated the effects of cannabis (e.g. smoked, vapourised, or orally ingested) and cannabinoid-based medicines (e.g. dronabinol, nabilone, nabiximols) in patients that were concomitantly taking other medications.

For example, the presence of NSAIDs, opioids, antidepressants, and anticonvulsants did not appear to cause a significant increase in adverse effects associated with the combination of cannabis or cannabinoids with these medications.

Δ9-THC is metabolised in the liver by cytochrome P450 (CYP) oxidases (CYP2C9, 2C19, and 3A) while also modulating the expression level of other types of CYP enzymes.

Δ9-THC inhibits the activity of the CYP1A1, 1A2, and 1B1 enzymes, while poly-aromatic hydrocarbons (found in tobacco and cannabis smoke) induce the expression of CYP1A2.

This is important because it affects the metabolism of other drugs. Examples include:

Most information regarding adverse effects reported with cannabis use comes from reports that evaluate recreational users rather than subjects in controlled clinical studies.

Therefore, these reported adverse side effects should not be assumed to be universal cannabis side effects:

Medicinal cannabis is an umbrella term for a range of cannabinoids that have health benefits.

In Australia, only Nabiximol (Sativex) and CBD (Epidyolex) are approved. Clinicians need to carefully consider the ∆9-tetrahydrocannabinol (THC)  and/or cannabidiol (CBD) content.

In the US, Dronabinol and Nabilone are additionally approved.

THC is the primary psychoactive component. CBD is not psychoactive and has fewer safety concerns than THC. When commencing a new medicinal cannabis product, the recommendation is to prescribe relatively low doses and slowly up-titrate the dose: this minimizes dose-related toxicities and the potential for drug-drug interactions with concomitant medications. 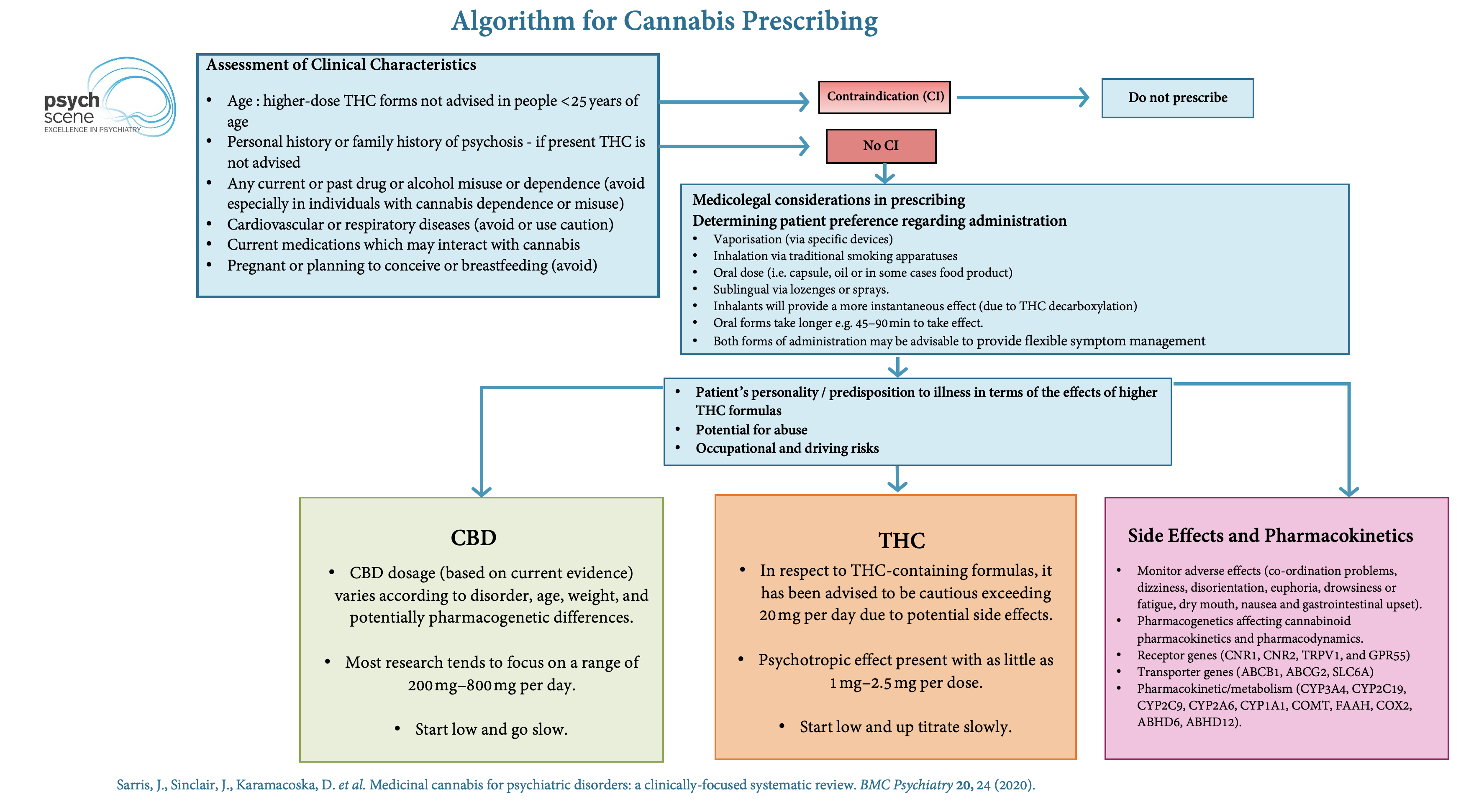 As policy evolves and medicinal marijuana becomes more readily available, primary research and clinical outcome studies must be carried out. Unfortunately, there is a dearth of evidence, and we must understand the efficacy, safety, and risk-benefit analyses of medicinal cannabis before use for different health conditions.

Chemical constituents of marijuana: the complex mixture of natural cannabinoids

The endocannabinoid system: an overview

Medical Marijuana: Clearing Away the Smoke

The endocannabinoid system: physiology and pharmacology

The endocannabinoid system and its relevance for nutrition

The endocannabinoid system and migraine

The association between cannabis use and depression: a systematic review and meta-analysis of longitudinal studies

A Cross-Sectional Survey of Medical Cannabis Users: Patterns of Use and Perceived Efficacy

Treating Insomnia Symptoms with Medicinal Cannabis: A Randomized, Cross-Over Trial of the Efficacy of a Cannabinoid Medicine Compared with Placebo

The contribution of cannabis use to variation in the incidence of psychotic disorder across Europe (EU-GEI): a multicentre case-control study

Effect of Cannabidiol on Medial Temporal, Midbrain, and Striatal Dysfunction in People at Clinical High Risk of Psychosis: A Randomized Clinical Trial

Bipolar disorder and the endocannabinoid system

Cannabinoids for treatment of chronic non-cancer pain; a systematic review of randomized trials

Prevalence and natural history of pain in adults with multiple sclerosis: systematic review and meta-analysis

A primer on medicinal cannabis safety and potential adverse effects