Monoamine oxidase inhibitors (MAOIs) were the first antidepressant drugs along with imipramine to be developed for treating depression. Following WW2, large amounts of rocket fuel hydrazine were given to the pharmaceutical industry. In 1952 isoniazid derived from hydrazine was found to have anti-tubercular properties. Isoniazid was serendipitously found to have mood-elevating properties, and subsequently, numerous hydrazine and non-hydrazine structures were synthesized.

However, toxicity issues coupled with its complex and numerous interactions with other drugs and dietary amines have triggered a decline in clinical use as well as causing the discontinuation of many other MAOI derivatives. [Yáñez et al. 2012]

Due to their side effect profile, MAOIs are not considered as first or second-line therapies for depression, although they still have a place in treatment-resistant depression and other disorders such as panic disorder, social phobia, and depression with atypical features. [Thase 2012]

MECHANISM OF ACTION OF MAOIs

Inhibition of the MAO enzyme increases the synaptic availability of these neurotransmitters, the accumulation of which is suggested to be responsible for MAOIs’ antidepressant effect.

There are two types of monoamine oxidase, MAO-A and MAO-B, both of which are bound to the mitochondrial membrane’s outer surface, where they preferentially bind amines. However, these two isoforms differ in their expression levels in different tissues.  [Saura Marti et al. 1990]: 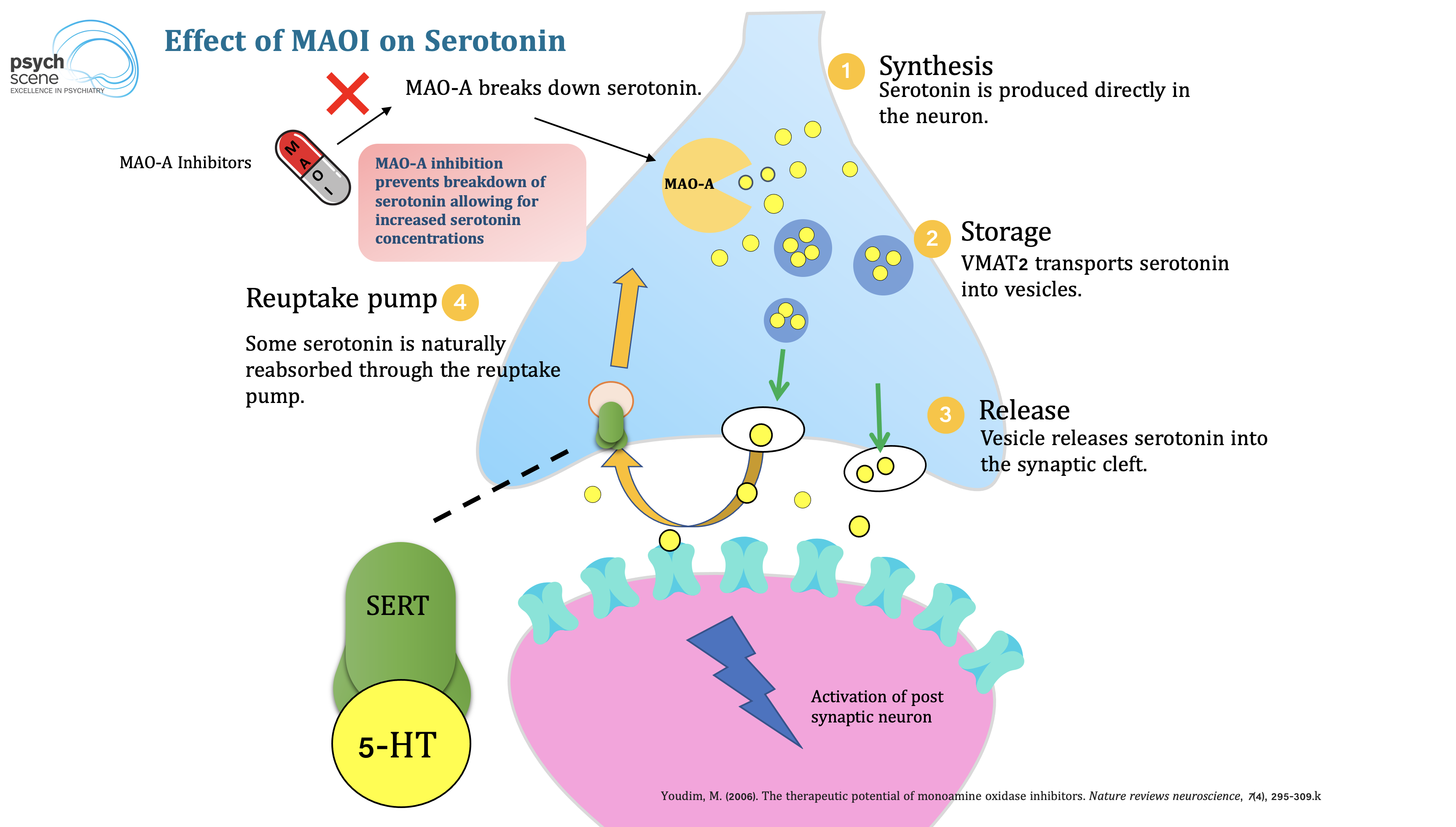 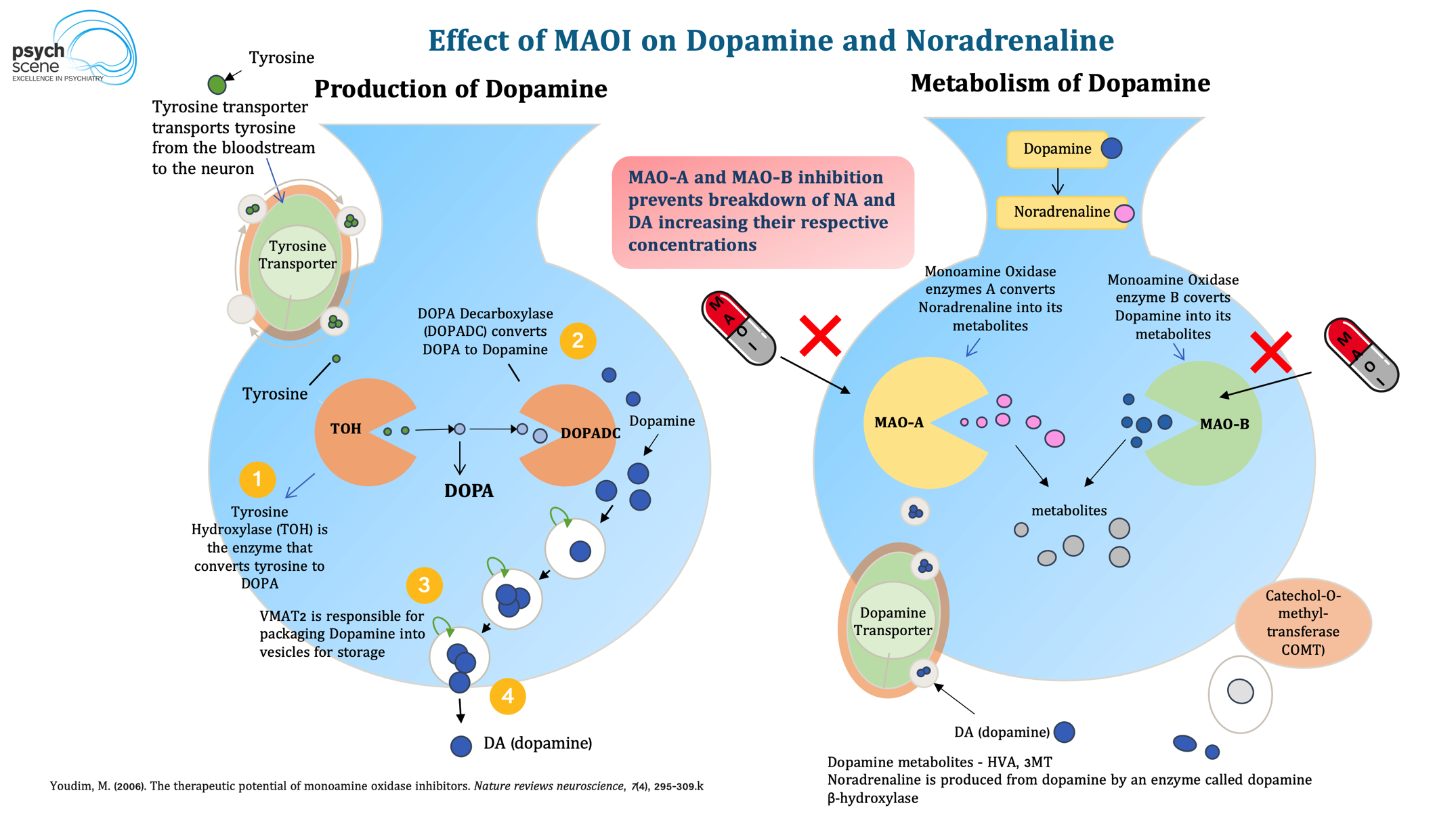 Within the CNS, Norepinephrine and dopamine neurons contain MAO-A and MAO-B with greater MAO-A content.

Outside the CNS, MAO-A predominates with only platelets and lymphocytes having MAO-B.

MAOIs are primarily classified on whether they are selective or non-selective and reversible or non-reversible. [Meyer, 2017]

In general, MAOIs have high bioavailability and reach peak plasma concentrations within two to three hours. Except for moclobemide (RIMA), MAOIs bind irreversibly and cumulatively inhibits up to 90% of target receptors; however, antidepressant effects are typically not observed until after 4 to 8 weeks of therapy.

MAOIs should be started at a low dose and gradually titrated up to the recommended daily dosage. If well tolerated after the first dose, increases can be made every 3-5 days. If postural hypotension occurs, consider slower increases.

Maximum dose of 80 to 100 mg tranylcypromine have been used.

Phenelzine may take 8-12 weeks for response as phenelzine is both a substrate and inhibitor of MAO.

Case studies of successful treatment with very high MAOI doses;  120 to 170 mg tranylcypromine or 120 mg phenelzine are present in literature.

While starting and titrating recommendations are to measure BP 3 times a week, twice a day (sitting and lying), followed by 2 successive measurements while standing for ≥1 minute to assess the degree of orthostatic hypotension.

Transdermal selegiline was developed to bypass impairments in the gastrointestinal tract as well as hepatic first-pass metabolism. [Robinson D 2002]

Strategies for transient BP increase (can occur with tranylcypromine) :

Note: Selegiline has L-methamphetamine metabolites and can be stimulating at higher doses. Selegiline has the potential for false-positive drug screens.

MAOIs are not generally recommended for pregnant or breastfeeding patients due to the lack of adequate safety data. Specialist involvement is recommended.

Drug interactions involving MAO inhibitors are frequently reported, although evidence is inconsistent and of poor quality. 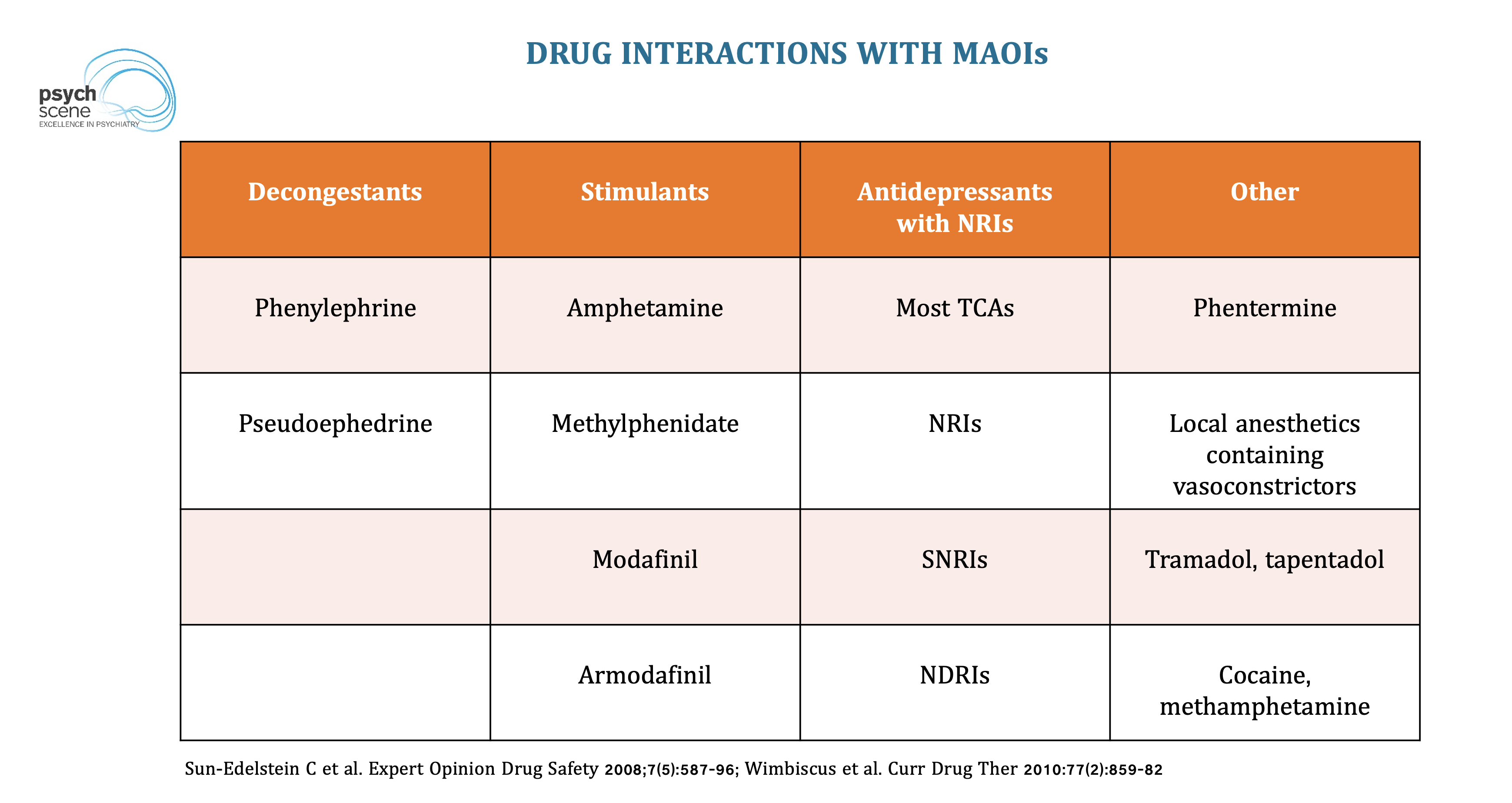 Two major interactions with MAOIs are: 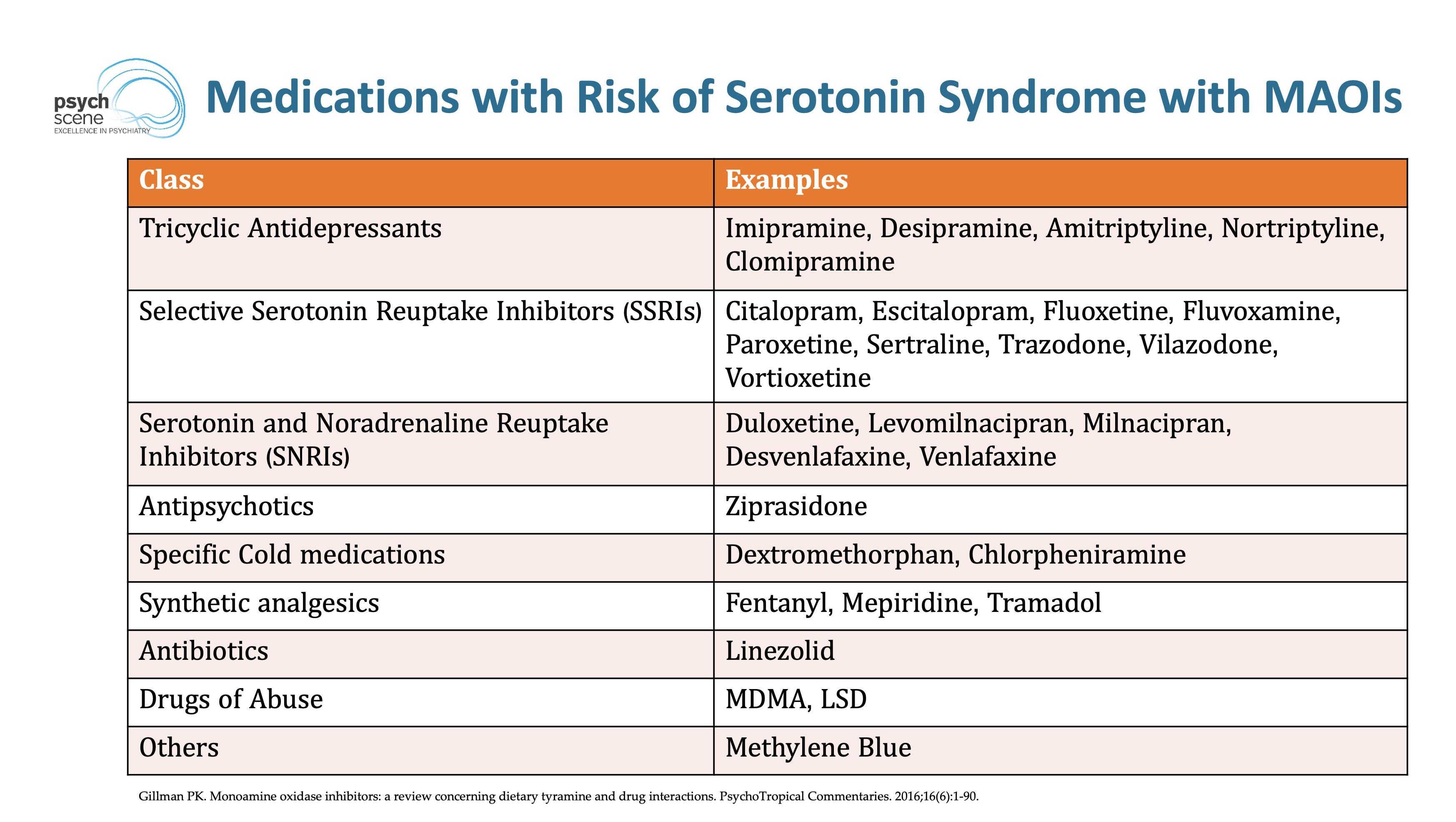 Note that Mirtazapine and Bupropion are not present as agents that increase the risk of SS. Mirtazapine is a serotonin antagonist (5HT2A and 5HT2C antagonist) with alpha-2 antagonist effects at higher doses. Bupropion is an NDRI.

There are case reports of the emergence of serotonin syndrome even 10 weeks after MAOI is stopped. 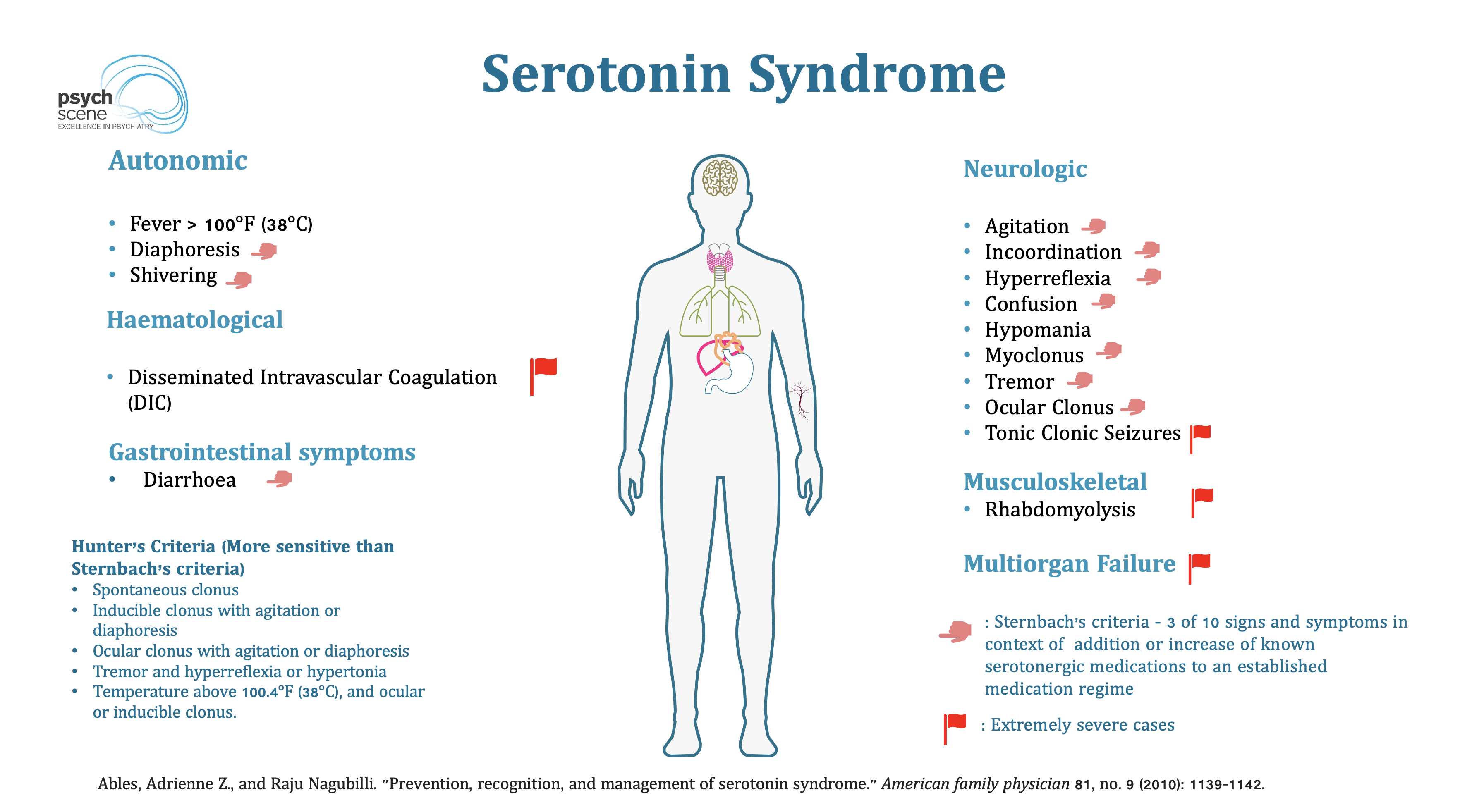 Other reported drug interactions include:

Patients who are prescribed MAOIs are advised to avoid foods rich in tyramine (e.g. aged cheeses and red wine). MAOIs inhibit the breakdown of tyramine, which can quickly develop into a hypertensive crisis characterised by severe headache, anxiety, confusion, and palpitations. [Anderson et al. 1993] 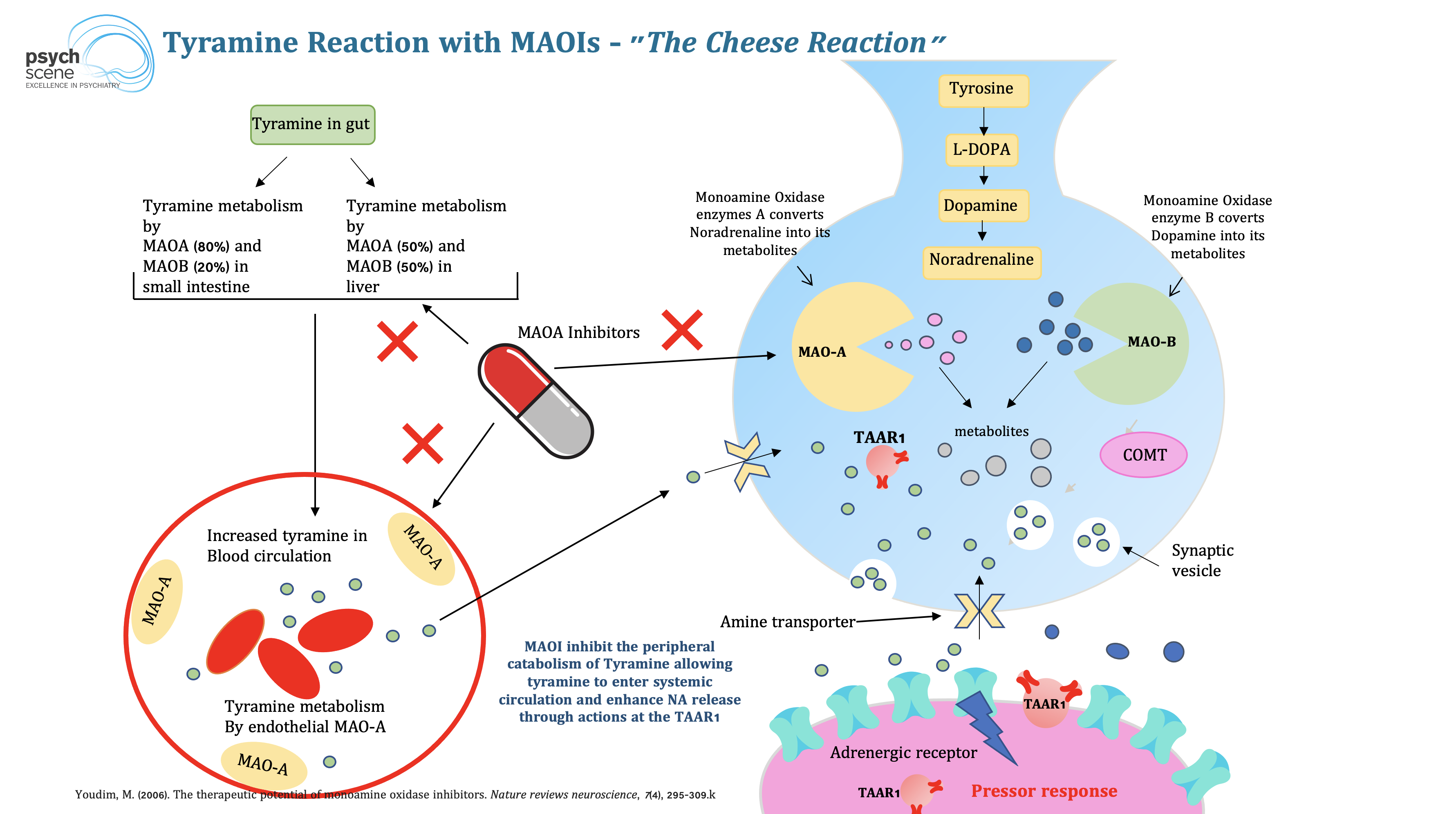 It is important to note that the tyramine content is low due to the changes in production and hygiene regulations in modern diets.

Very few foods now contain problematically high tyramine levels, that is a result of great changes in international food production methods and hygiene regulations. Cheese is the only food that, in the past, has been associated with documented fatalities resulting from hypertension. Nowadays most cheeses are quite safe, and even ‘matured’ cheeses are usually safe in healthy-sized portions. The variability of sensitivity to tyramine between individuals, and the sometimes unpredictable amount of tyramine content in foods, means a little knowledge and care are still required. [Gillman, 2016] 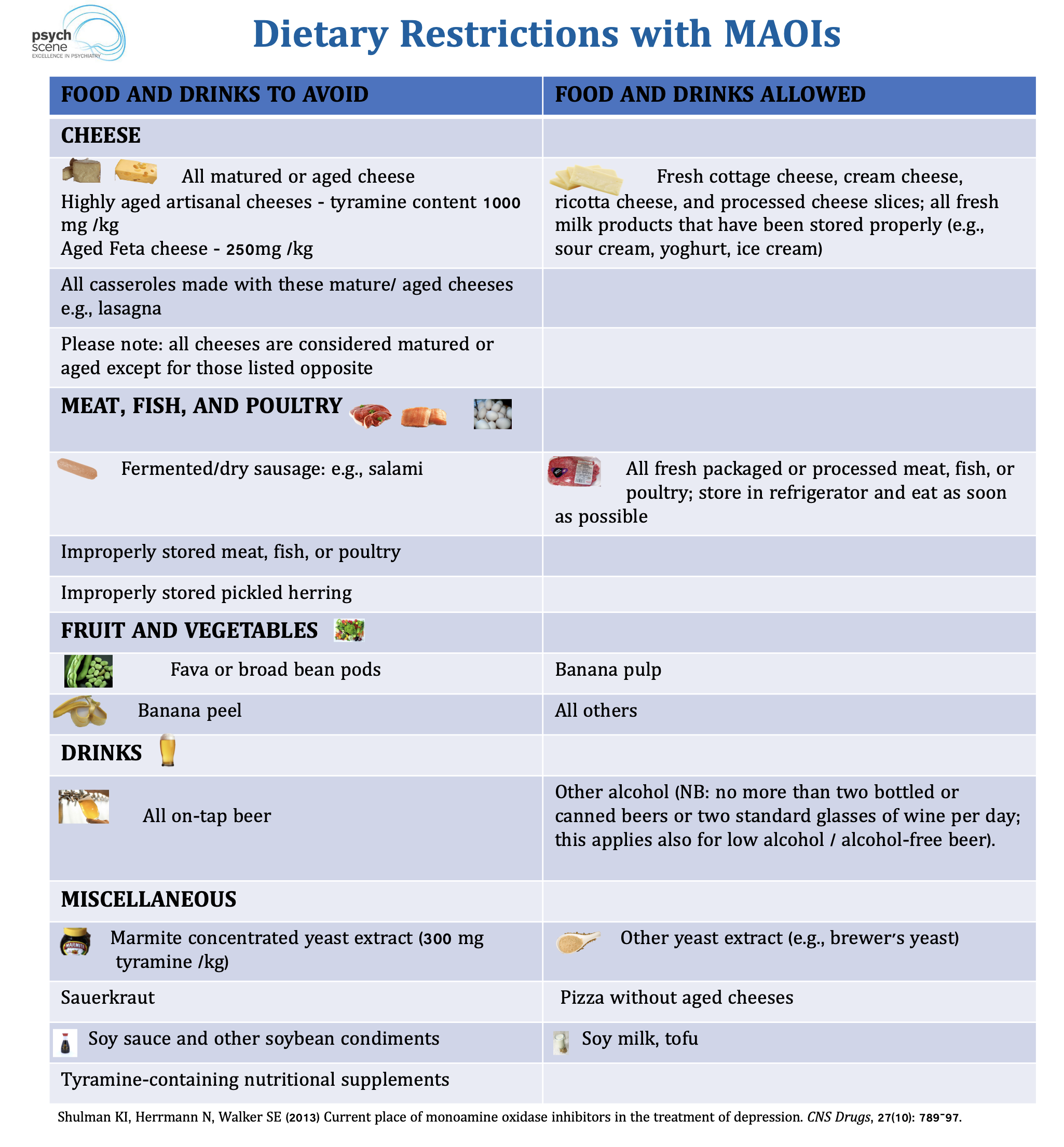 Of note, the transdermal delivery of selegiline allows for more targeted inhibition of MAO in the brain with minimal effect on MAO-A enzymes in the gut and hepatic systems, thus reducing its interaction with food-derived tyramine.

RANZCP clinical practice guidelines suggest that irreversible MAOIs have a third-line role in the acute treatment of depressive disorders, with particular utility for

If psychomotor retardation is a prominent symptom, or in the case of a predominantly endogenous (melancholic) depression, tranylcypromine may be preferred over phenelzine.

The response rates of tranylcypromine in treatment-resistant depression have ranged from 29% to 75% in two open-label and four double-blind studies, with a median rate of 50%. [Menkes et al., 2016]

In the STAR*D study, tranylcypromine was compared with mirtazapine combined with venlafaxine in patients who had not responded to citalopram over 12–14 weeks and two further antidepressant trials. Whilst remission rates did not significantly differ [6.9% for tranylcypromine vs 13.7% for mirtazapine plus venlafaxine]. [McGrath et al., 2006]

The average dose of tranylcypromine (37 mg/day) in the STAR*D was likely to have been suboptimal; despite this, those receiving the MAOI had almost twice the discontinuation rate (41%) due to adverse effects. [Menkes et al., 2016]

Problems with tolerability rather than efficacy would thus tend to relegate tranylcypromine to a third-line choice in treatment-resistant depression.

MAOIs may be used in Bipolar depression, but the evidence base is weak. MAOIs may be of particular advantage, as they appear to produce a lower manic ‘switch’ rate than TCAs and SSRIs. [Menkes et al., 2016]

The MAOI phenelzine has been studied the most, and the literature supports its ability to reduce intrusive symptoms associated with PTSD. [Kosten et al 1991]; [Stein et al 2006]

However, not all MAOIs have shown efficacy, and these agents are not considered first-line. Also, it is unknown whether this effect is independent of its efficacy in reducing the symptoms of depression.

In addition, selective MAO-B inhibitors have shown efficacy in the symptomatic treatment of mild Parkinson disease during the early stages. [Ives et al. 2004]

This includes reductions in motor symptoms and a reduced requirement for levodopa without any safety concerns observed.

Phenelzine is preferred over  tranylcypromine in premorbid anxiety disorder, or in the case of comorbid panic disorder, due to its GABA potentiating activity. 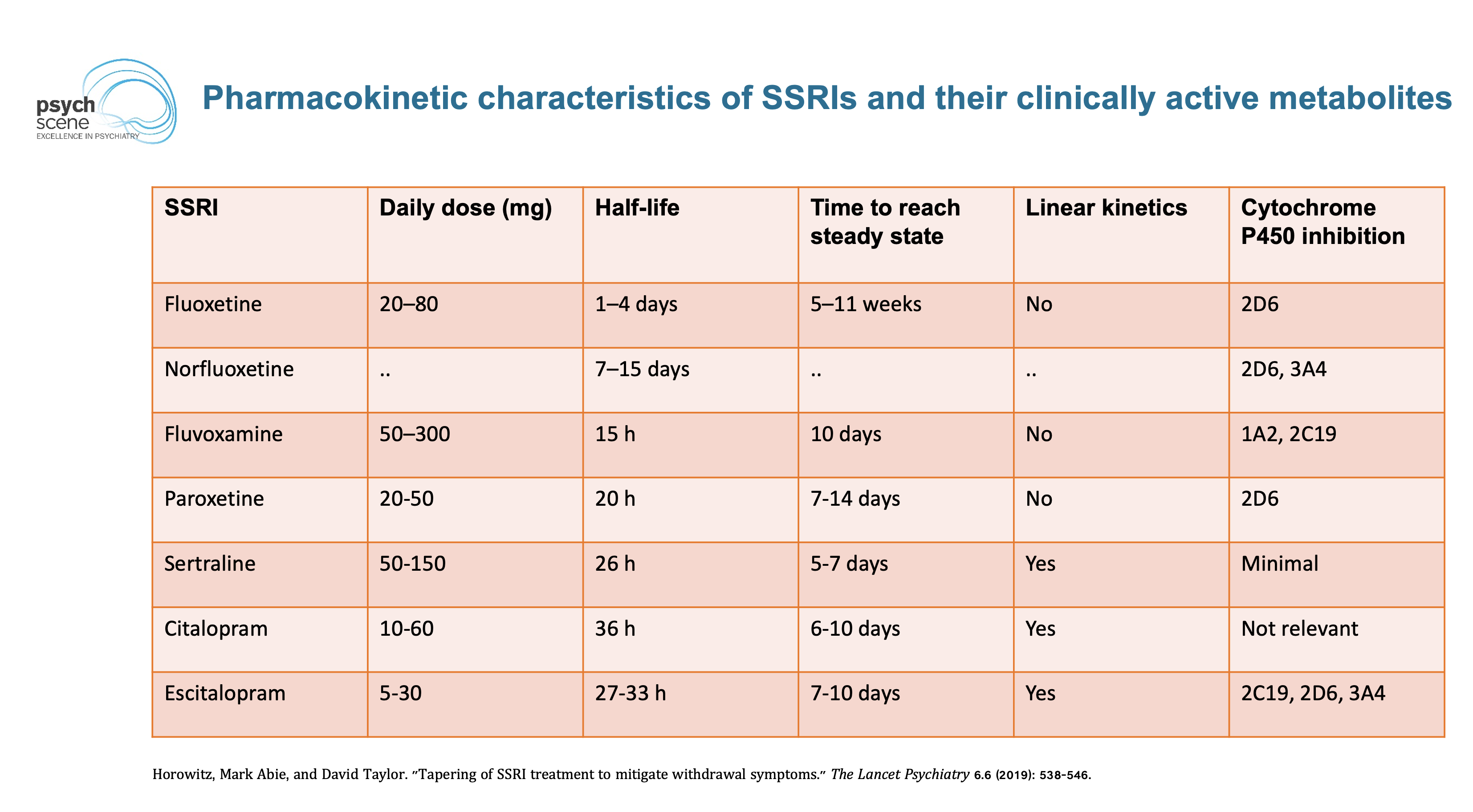 A washout period of 2-3 weeks is always advised after stopping an MAOI before commencing an alternative AD. (includes switching from one MAOI to another).

Fluoxetine requires a longer washout period as its half life is longer due to its metabolite norfluoxetine (half life 7-15 days). higher doses may need > 6 weeks.

Switching from Vortioxetine also requires a longer washout period as Vortioxetine has a median elimination half-life of approximately 66 hours equating to a minimum washout duration of 14 days.

The following augmentation options have been described in literature however clinicians should exercise caution and carry out an individualised risk benefit analysis. [Van den Eynde et al, 2022]

The MAOIs were the first antidepressants to be developed; however, continued reports on their substantial side effects resulted in these drugs being quickly replaced by safer and more effective options.

Data collected from European tertiary treatment centres indicated that MAOIs were used as the primary treatment in just 0.3% of the patients with unipolar depression. [Dold et al., 2016]

The reasons for low prescribing rates of MAOIs include:

Today there is a renewed interest in the pharmacology of MAOIs, particularly in patients who show a lack of response to more modern antidepressants.

Clinicians should familiarise themselves with the psychopharmacology of MAOIs and re-consider them as a valid option in treating psychiatric disorders.

History and therapeutic use of MAO-A inhibitors: a historical perspective of mao-a inhibitors as antidepressant drug

The role of monoamine oxidase inhibitors in depression treatment guidelines

Structures and Mechanism of the Monoamine Oxidase Family

Molecular neuroanatomy of MAO-A and MAO-B

Inhibitors of MAO-A and MAO-B in Psychiatry and Neurology

The role of monoamine oxidase inhibitors in current psychiatric practice.

A review of serotonin toxicity data: implications for the mechanisms of antidepressant drug action

Revisiting monoamine oxidase inhibitors for the treatment of depressive disorders: A systematic review and network meta-analysis

MAOIs – does the evidence warrant their resurrection?

Combining stimulants and monoamine oxidase inhibitors: a reexamination of the literature and a report of a new treatment combination.

Israel JA. Combining stimulants and monoamine oxidase inhibitors: a reexamination of the literature and a report of a new treatment combination. Prim Care Companion CNS Disord. 2015;17(6)

Tranylcypromine plus amitriptyline for electroconvulsive therapy-resistant depression: a long-term study.

Current Place of Monoamine Oxidase Inhibitors in the Treatment of Depression