Lithium Prescribing and Monitoring in Clinical Practice – A Practical Guide

In 2016, Kessing and colleagues published data on the prescription patterns of patient’s who were first diagnosed with bipolar disorder. [1]

Major changes were reported with drug prescription choices over the period from 2000 to 2011 with antiepileptic and atypical antipsychotics were prescribed substantially more than lithium, despite lithium having a substantial evidence base as a mood stabiliser with proven efficacy in acute mania, long-term prophylaxis of bipolar disorder and to a lesser extent in depressive disorders.

New data indicate the importance of long-term prophylaxis after a first manic episode to lessen episode recurrence, allow cognition to recover to normal, and prevent various aspects of illness progression. Given the highly recurrent and progressive course of bipolar disorder sometimes even in the face of conventional treatment, the role and enhanced use of lithium deserves reconsideration.

We covered the neuroprotective effect of lithium and a summary of its mechanism of action in a previous article.

Another article provides a more comprehensive synopsis of Lithium’s mechanism of action along with a visual guide.

In this article, we focus on the practical aspects of prescribing lithium in clinical practice.

However, a response to lithium monotherapy is longer than most atypical antipsychotics (6-10 days), and therefore lithium is often administered in combination with an antipsychotic for faster symptom relief. [2]

Lithium is evidence-based in the management of acute bipolar depression, however, the evidence base is less impressive than that for Mania.

Nonetheless, it is included as an option in the recent RANZCP guidelines for the treatment of acute bipolar depression. [3]

The paucity of a strong evidence base may be because lithium’s antidepressant effect can take 6-8 weeks, which may be perceived by patients as lacking efficacy resulting in high drop-out rates which can skew trial results.

Lithium monotherapy is effective against manic, depressive, mixed relapse and suicidal behaviours. It also has better evidence for the prevention of new episodes than other agents and has more substantial evidence base documenting the risks of prolonged exposure. [4]

More recently, the real-world effectiveness study in a Finnish cohort of 18018 patients found that lithium use was associated with the lowest risk of rehospitalisation because of mental or physical illness compared to antipsychotics or other mood stabilisers. [6]

Lithium is less effective in rapid cycling and mixed states although it decreases symptom severity and reduces morbidity.

Lithium therapy, therefore, is advocated in rapid cycling as combination therapy with other psychotropics.

Patients who are compliant with lithium show a reduction in suicidal behaviour even in the absence of mood stabilisation likely through the reduction of aggression and impulsivity.

The two reviews by Cipriani et al., overwhelmingly highlight lithium’s anti-suicidal effect which showed a risk reduction of 60% for suicide and 70% for self-harm. [7]

After a single dose, the body distributes lithium throughout most of the tissues and fluids of the body.

Besides the serum and the brain, lithium is found in the bone, thyroid, and red blood cells.

Moreover, magnetic resonance spectroscopy shows that brain concentrations of lithium are about half those found in the serum (0.5:1 ratio of Brain : Serum lithium concentrations). Lithium peaks in the brain approx 24 hours after ingestion. [8] 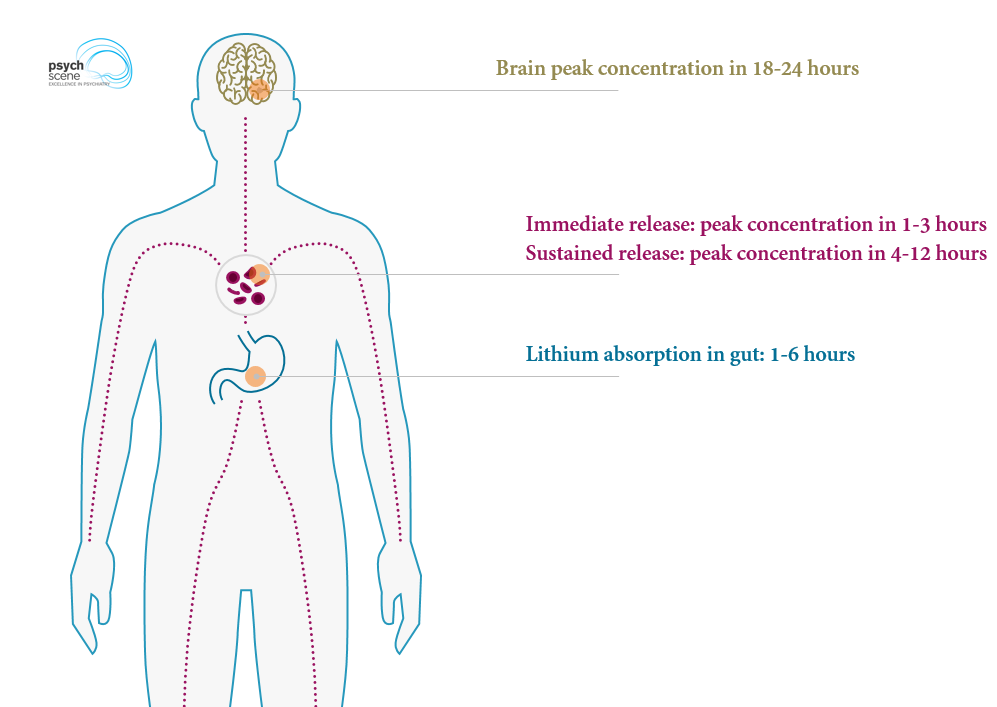 Lithium is exclusively excreted through the kidneys without undergoing any known in vivo metabolic transformations. Approximately, 80% of administered lithium is re-absorbed by passive diffusion in the proximal tubes, although there is high inter-individual variability.

The half-life of lithium is between 18-36 hours.

The absorption and bioavailability of lithium differs based on the various formulations available.

Lithium is administered as a salt in the form of lithium carbonate, lithium citrate, lithium chloride or lithium sulfate.

Lithium is available in Australia as:

Lithium citrate oral solution is also available in other countries.

Due to the delay (7-10 days) in the anti-manic effect of lithium, it is usually combined with an antipsychotic in the treatment of mania which provides more acute symptom relief.

Lithium can be prescribed as a single dose or multiple dose schedule. A single dose regime can be associated with higher peaks in plasma lithium levels (associated with side effects) and deeper troughs (higher likelihood of breakthrough symptoms).

After initiation, lithium levels should be checked after 7 days, then 7 days after every dose change until the desired level is reached. [The Maudsley Prescribing Guidelines in Psychiatry, 12th edition] (See levels below)

The dosing properties of lithium can vary in special situations due to its potential for toxicity:

Lithium in pregnancy should be used only after a careful risk-benefit analysis.

Lithium can cross the placenta and can increase the risk of Ebstein’s anomaly with exposure in the first trimester (4-12% risk).

The risk associated with lithium exposure at any time during pregnancy is low, and the risk is higher for first-trimester or higher-dosage exposure. Ideally, pregnancy should be planned during remission from bipolar disorder and lithium prescribed within the lowest therapeutic range throughout pregnancy, particularly during the first trimester and the days immediately preceding delivery, balancing the safety and efficacy profile for the individual patient. [Fornaro M et al., 2019]

During the third trimester, lithium clearance increases by up to 50% due to increases in glomerular filtration rate, which can result in recurrence of manic symptoms.

Lithium is excreted in breast milk, and infant levels may be 30-50% that of the mother. Thus the infant should be monitored for signs of toxicity should the mother continue to breastfeed.

The co-morbid physical and psychiatric changes in the elderly can increase the risk of adverse events.

It is recommended that a lower starting dose (reduction of 25-35% in dosages) and slower dose titration be used.

This is primarily due to reduced renal function in conjunction with poor water retention resulting in less lithium excreted and poorer distribution of lithium through the body. [9]

Renal insufficiency and nephritic syndrome are a relative  contraindication, and the elimination half-life reported in patients with renal disease is increased from 24 hours up to 40-50 hours.[8]

It is recommended that patients’ renal function be closely monitored during lithium therapy.

Lithium clearance is significantly greater for obese patients than for non-obese. This was shown to correlate well with the level of fat-free mass rather than total bodyweight.

Therefore, it is recommended that treatment starts with smaller initial doses of lithium, which are closely related to the patient’s ideal bodyweight, and then to administer larger doses based on a patients’ actual bodyweight. [10]

When evaluating adverse reactions to lithium, the following three factors should always be considered:

Common side-effects of lithium toxicity include:

Fine tremors (that are distinct from PD-related tremors) and impaired movement, is often induced by lithium therapy.

Extended-release formulations can reduce tremors as well as limiting nicotine and caffeine intake.

Mental dullness or lack of mental creativity have been reported alongside negative effects on verbal learning and memory domains.

Lithium can affect the thyroid and parathyroid glands.

Lithium reduces thyroxine secretion leading to an increase in TSH and the associated clinical picture of hypothyroidism resulting in lethargy, depression, weight gain, and dry skin.

Clinically significant hypothyroidism occurs in 8-19% of patients on lithium compared to 0.5-1% of the general population. Women and elderly are particularly prone. [12]

Lithium is associated with hyperparathyroidism which leads to hypercalcaemia. 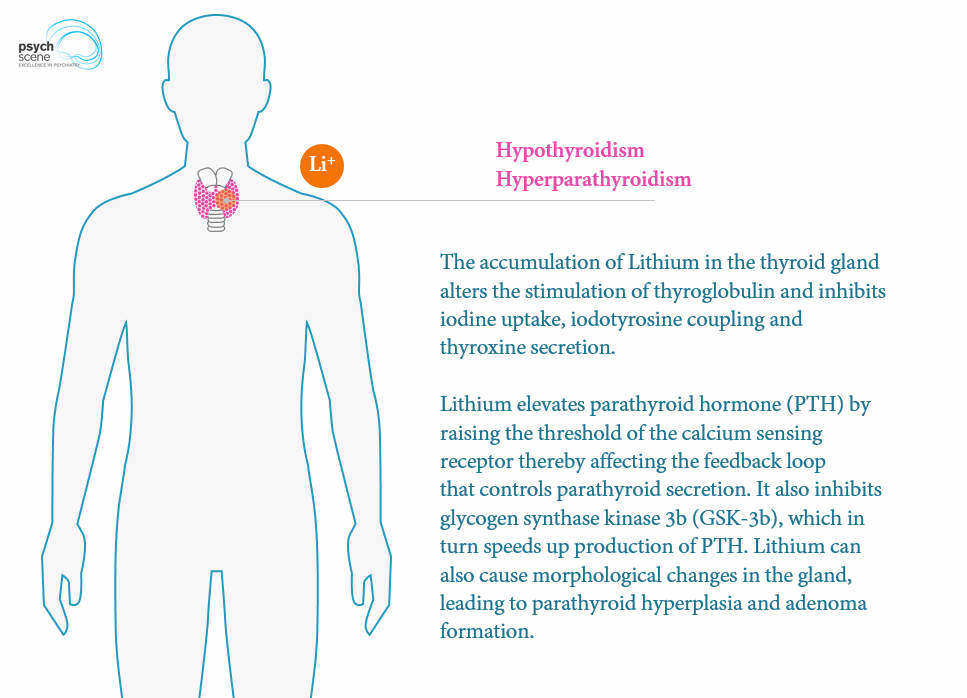 Frequent urination (polyuria) and excessive thirst (polydipsia) are consistently reported during the initial stages of lithium therapy and are also likely to be related to each other (i.e. thirst is secondary to renal-mediated polyuria).

It is caused by lithium inhibiting the action of antidiuretic hormone (ADH).

The decreased ability of the kidney to concentrate urine predisposes patients to diabetes insipidus which affects approximately 10% of lithium-treated patients. This can be moderated by amiloride and potentially by the carbonic anhydrase inhibitor acetazolamide. 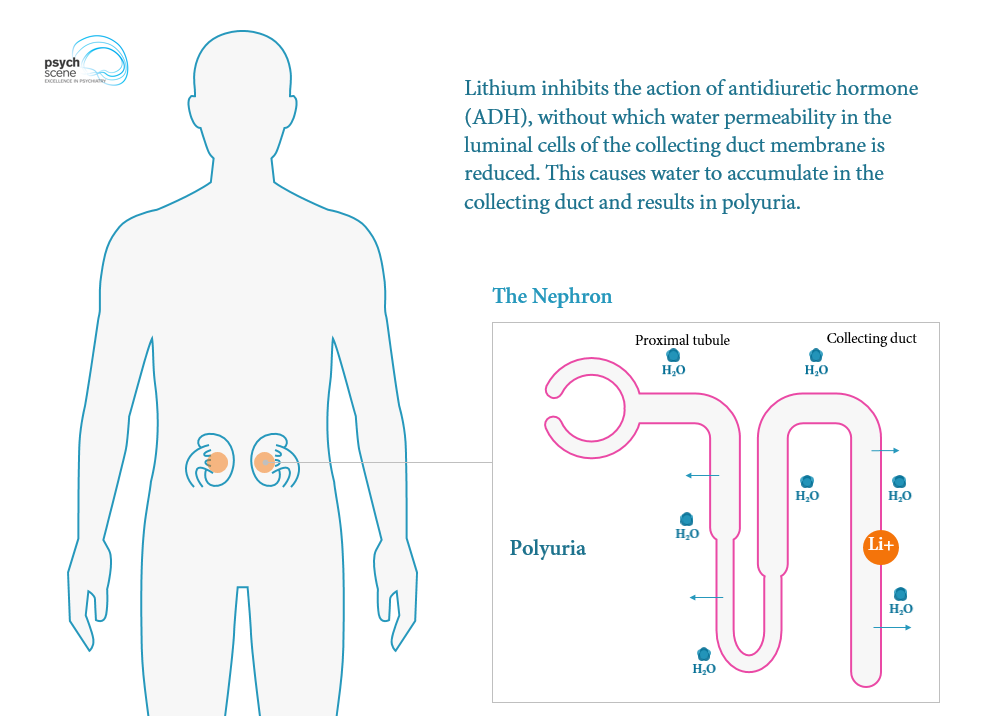 Lithium levels > 0.8 mmol/L are associated with a higher risk of renal toxicity.

End-stage renal failure occurs in 0.53% of lithium-treated patients compared to 0.2% of the general population.

512 bipolar patients followed up showed that lithium tended to begin to decrease estimated GFR (eGFR) after 10–15 years and risk of low values typically required 30 years of treatment, although no patient went on to end-stage renal failure requiring dialysis. The following are risk factors for low eGFR: [13]

Calabrese reported that mean weight change over one year in a double-blind study of lithium-treated patients was 4.2 kg. [14]

However, for the majority of bipolar patients weight gain is more likely to occur due to other psychotropic medications (such as antipsychotics, valproate and some antidepressants).

It is important to understand lithium’s mechanism of action and to determine the effect a patient’s age, body composition, and disease states has on the clinical outcome, side-effects, and potential toxicities.

Bringing these clinical insights together along with awareness of significant drug interactions can aid in optimising lithium management.

The RANZCP mood disorder guidelines recommend the following timetable for monitoring of side effects. 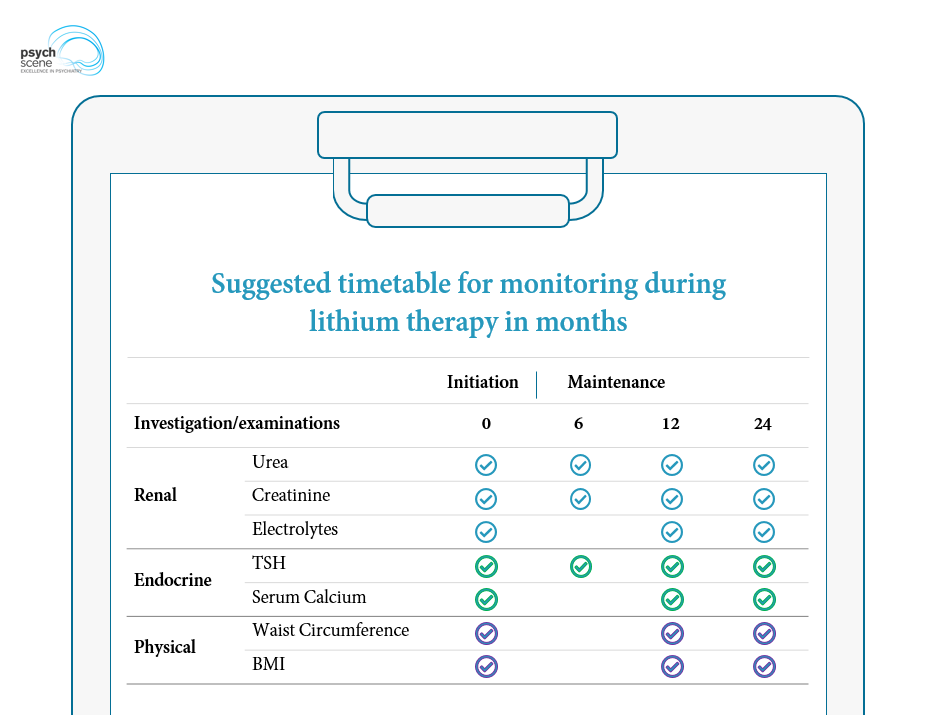 Above levels of 2.0, mmol/L increasing disorientation and seizures can occur.

However, in some instances, even such high plasma levels may lead to mild symptoms.

Because lithium has a longer half-life in brain tissue than in plasma, long-term lithium treatment can lead to lithium accumulation in the brain and lead to chronic toxicity.

Many patients taking lithium will also be taking it in combination with anticonvulsants, antipsychotics, or antidepressants.

It is important to note any clinically relevant drug interactions:

Enhances the neurological effects of lithium including dizziness, tremors, confusion, and hyperreflexia. This can occur even in the absence of detectable serum increases

Lithium clearance is reduced with lithium levels increasing from 10% – greater than 4 fold increases.

CLINICAL USE OF LITHIUM

The recommendation is to commence therapy with a low and divided dose and to increase this until a serum lithium level of 1.2 mmol/L is reached. Patient requires monitoring and assessment for adverse events as the dose is increased closer to the therapeutic range.

Lithium naive patients should have lithium levels of 0.8 – 1.0 mmol/L.

The NICE guidelines propose a starting level of 0.6 -0.8 mmol/L.

The APA proposes a higher level of 0.8-1.0 mmol/L for controlling symptoms but low levels of 0.4-0.6 mmol/L for prophylaxis long term. 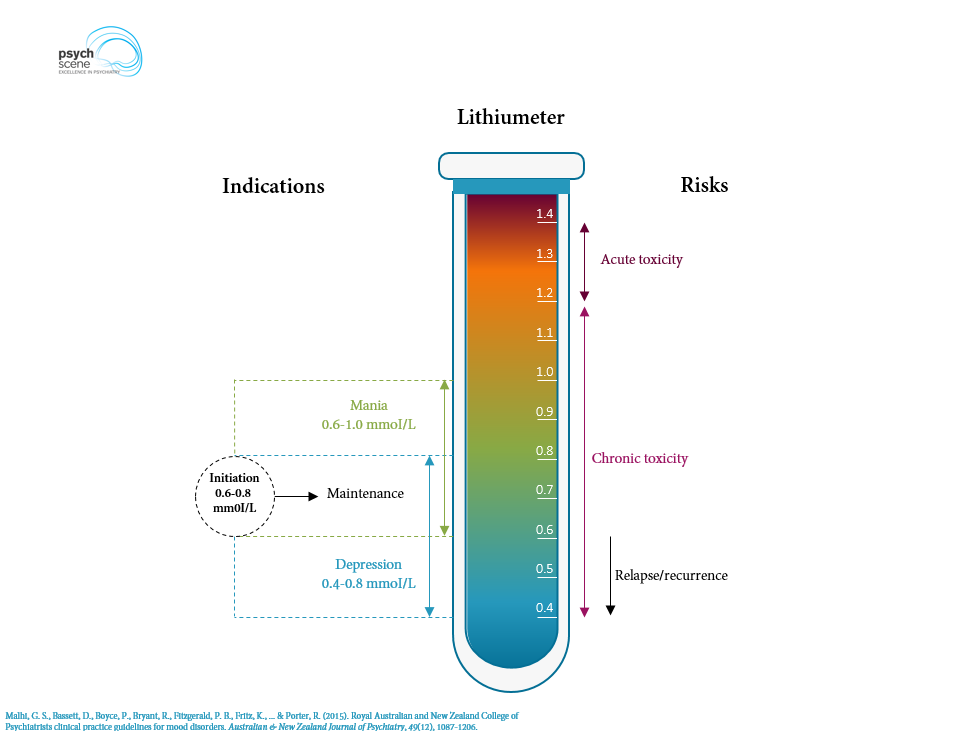 For prophylaxis, a lower dose of 0.4-0.6 mmol/L may be sufficient whereas for stabilizing patients, it is recommended that a serum concentration of 0.6-0.8 mmol/L may be required.

For the control of mania, a serum concentration of 0.8-0.1 mmol/L is more common.

In clinical practice, the serum concentration of lithium requires the clinician to understand the risk-benefit ratio of lithium maintenance therapy.

The long-term maintenance of the recommended target plasma lithium level provides effective prophylaxis and the prevention of symptom recurrence.

Adherence rates are often impaired due to weight gain, polyuria, tremor, and fatigue.

Psychoeducation for the patient and their supportive network is crucial as is careful and frequent monitoring of the patient to ensure compliance is maintained.

Below are the serum levels for initiation and prophylaxis based on different guidelines. 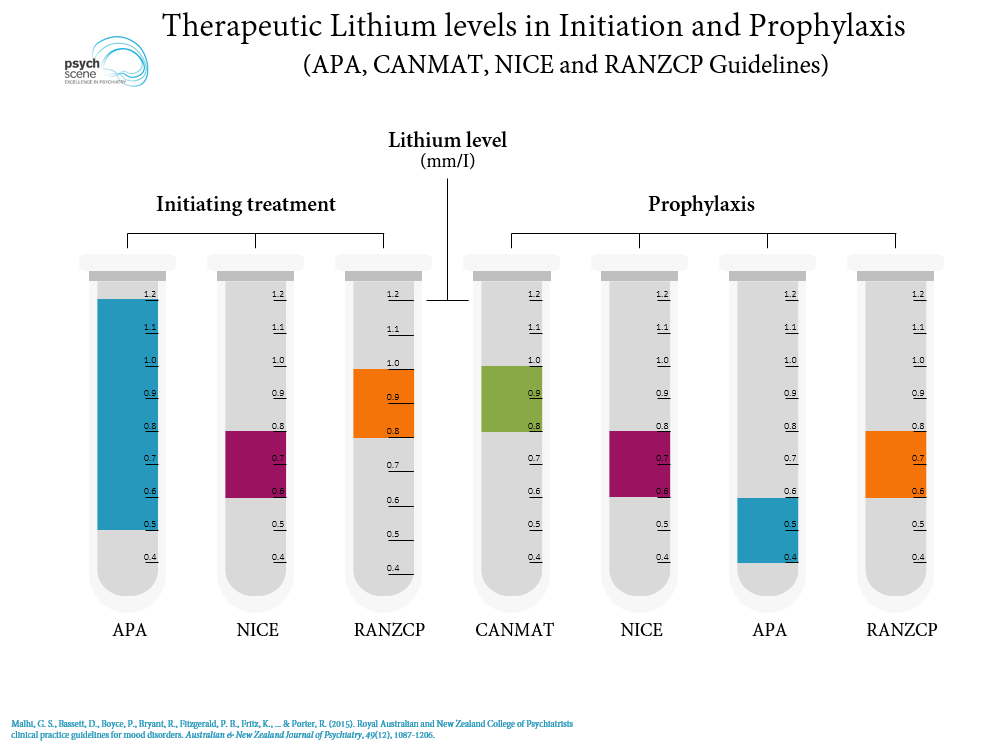 Lithium is considered a gold-standard treatment for bipolar disorders and a first-line mood stabiliser in many clinical guidelines.

It is important that clinicians appreciate the pharmacokinetics and pharmacodynamics of lithium to ensure the greatest efficacy in the absence of overt toxicity.

The utilisation of treatment guidelines, in conjunction with a clinician’s experience, should guide an appropriate and relevant treatment strategy for bipolar disorder that is tailored to the individual.

10. Lithium pharmacokinetics in the obese

11. Effects of lithium on cognitive performance: a meta-analysis.