Lithium’s Mechanism of Action – A Synopsis and Visual Guide

It is also one of the two agents that have anti-suicidal properties in psychiatry, the other being clozapine. [2] Despite the significant evidence which is in favour of lithium for both prophylaxis of bipolar affective disorder and as an anti-suicidal agent, its use is declining since the beginning of the 21st century.

It thus becomes crucial for clinicians to consider lithium as an important part of the management of bipolar affective disorder.  Despite its first discovery 1949 and its subsequent use, the exact mechanisms of action in lithium are unclear.

In this article, we summarise lithium’s multitude of mechanisms of action.

We have previously covered lithium’s mechanism of action with a focus on neuroprotection along with another article on lithium with prescribing and monitoring in clinical practice.

In this article, we focus on two key aspects

The main reference for this article is : Potential Mechanisms of Action of Lithium in Bipolar Disorder by Malhi et al., 2013. [3] 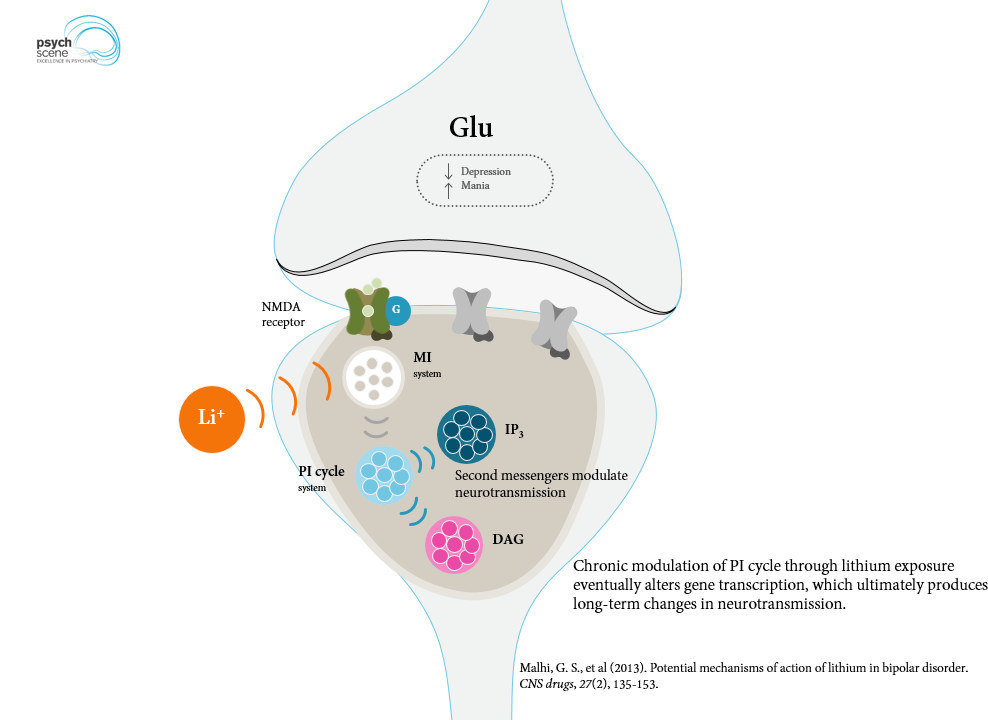 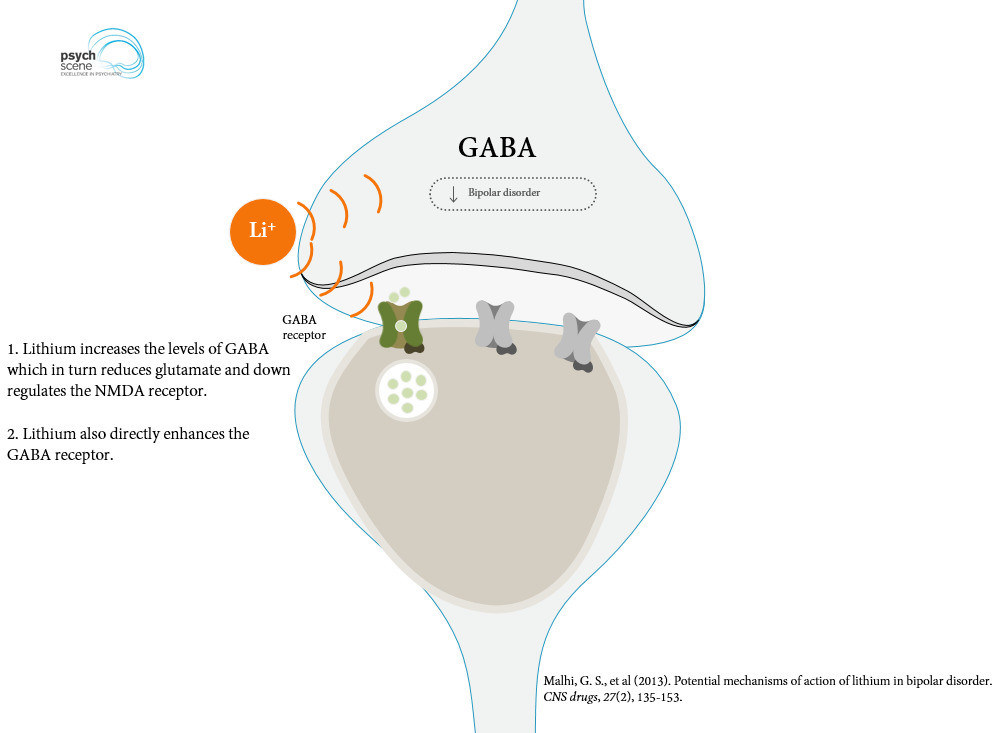 Second messengers are a system that comprises of enzymes and molecules that translate signals that are received by the receptors of the cell surface and by process of signal transduction, translate the signal to a cellular response. 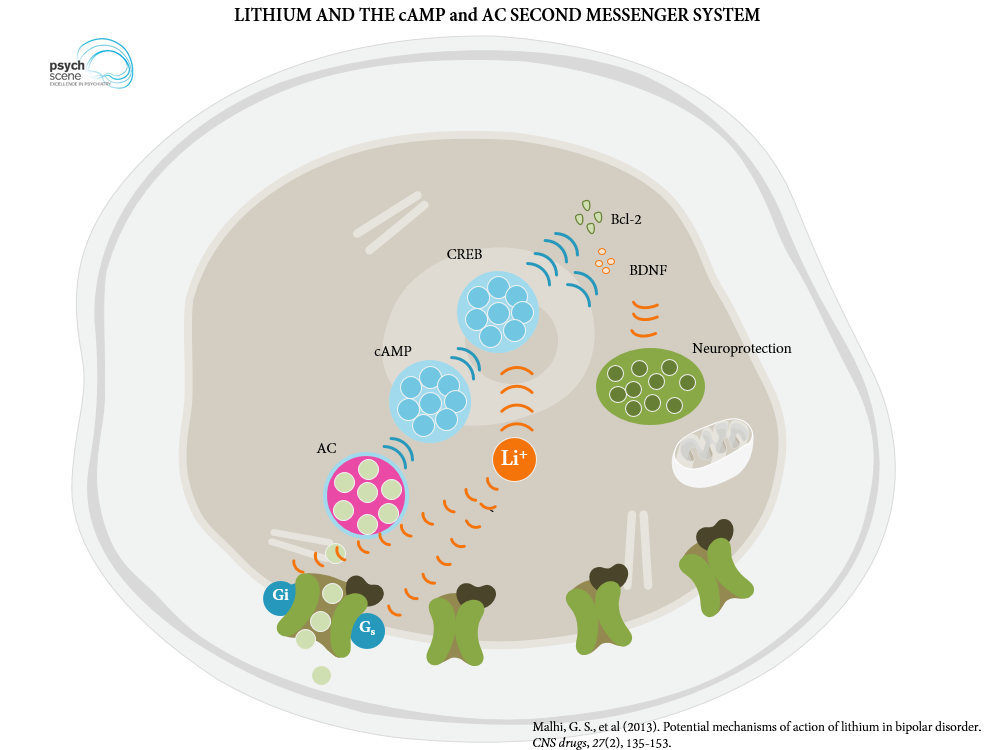 THE PHOSPHOINOSITIDE (PI) CYCLE AND THE MYO-INOSITOL DEPLETION HYPOTHESIS 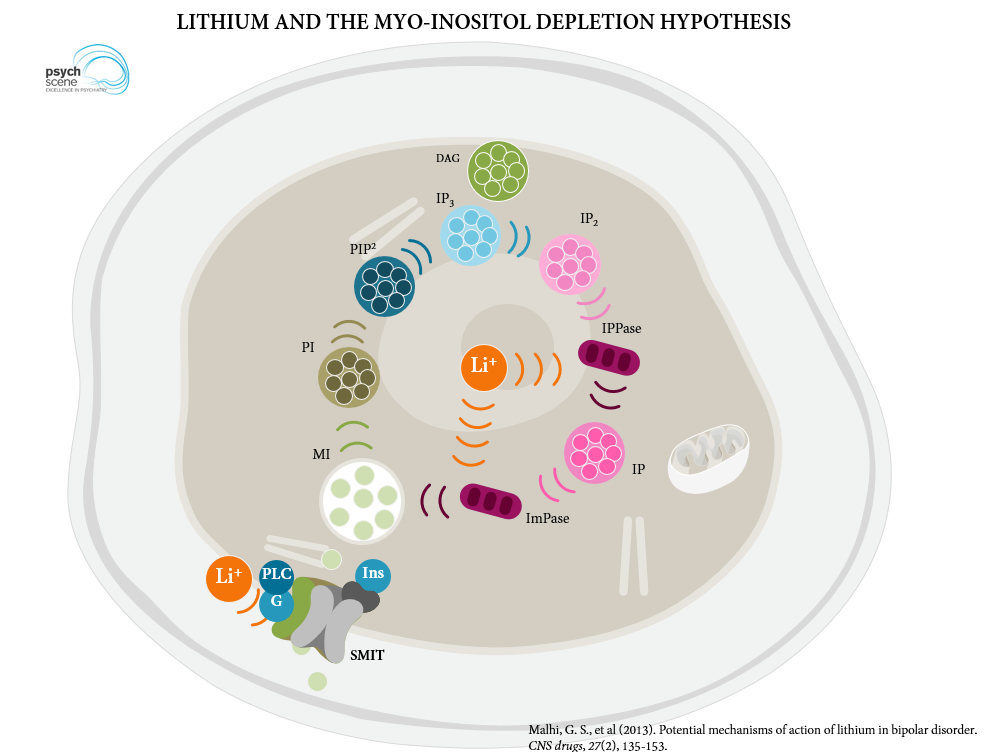 Myo-inositol (mI) levels are elevated in patients with mania. Lithium inhibits ImPase and IPPase which reduces the availability of myo-inositol and PI’s. 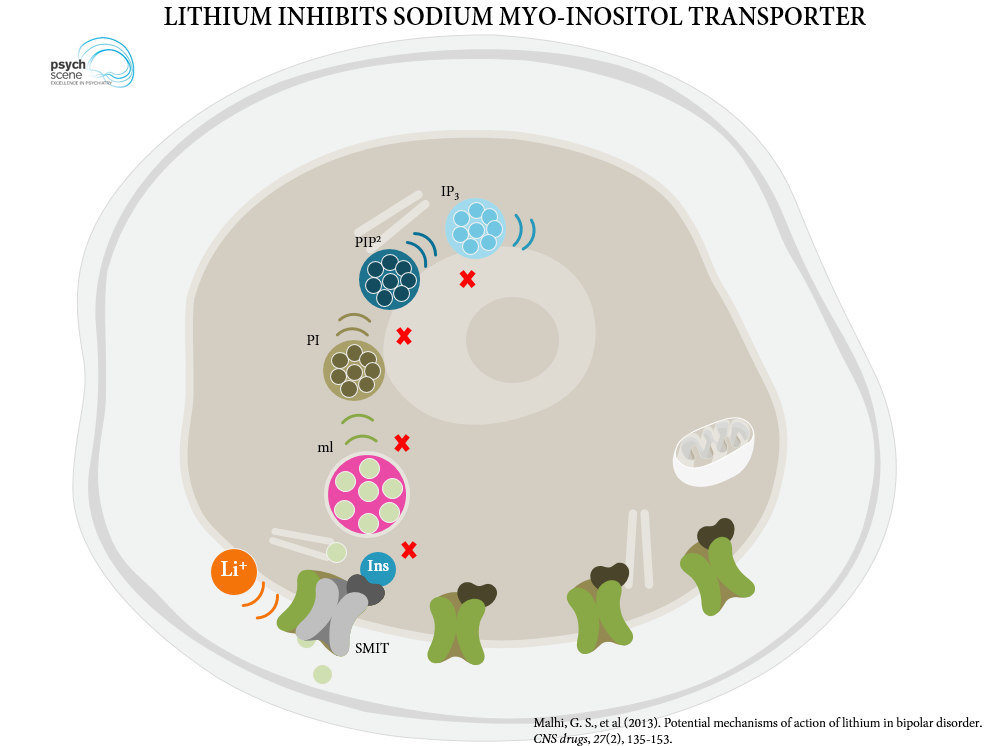 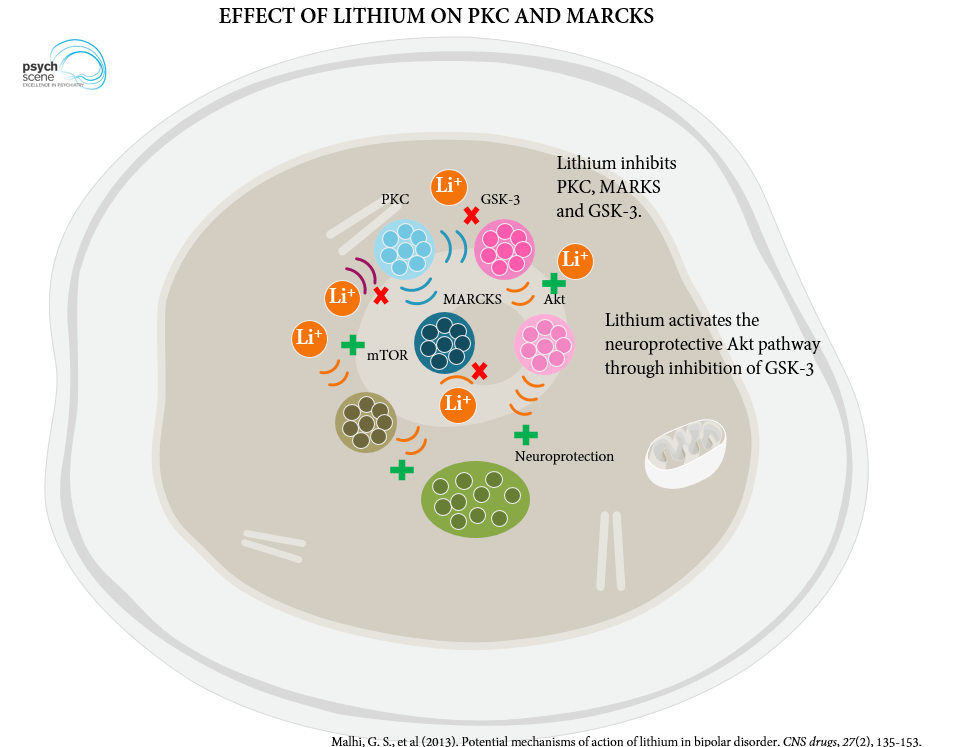 Calcium is a highly diverse cation that plays multiple roles in the cellular functioning from neurotransmission, cellular integrity, metabolism and gene transcription.

The most consistent finding of elevation of intracellular calcium levels may be a marker of illness state level and  marker. 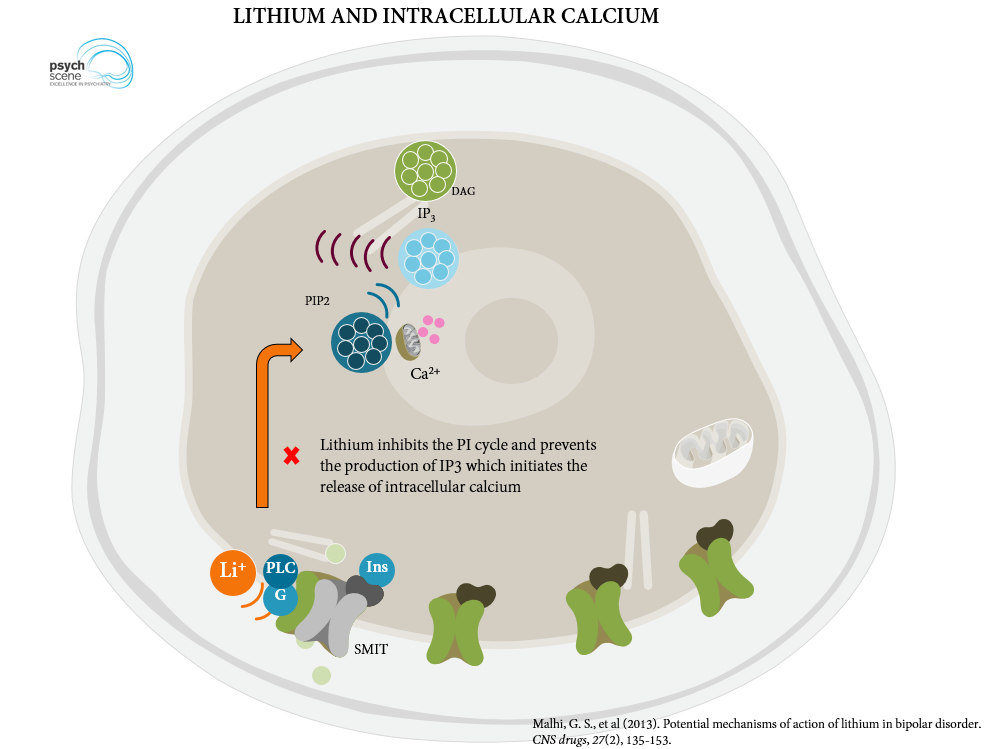 In bipolar disorder, there are several hypotheses that are postulated to lead to neuroprogression

1. Neurosensitisation model: Manic and depressed episodes cause changes in gene progression which alter neuronal activity.  This makes the individual more susceptible to relapse and less likely to respond to medication.

2. Allostatic load hypothesis: The wear and tear caused by episodes of mania thus proposes wear and tear of mania and depression, alters the function in key brain circuits which leads to cognitive decline, thus increasing the likelihood of further illness and treatment resistance

3.  Neurodevelopmental model: This postulates the decrease in cell density in the bipolar brain due to abnormal neural development. 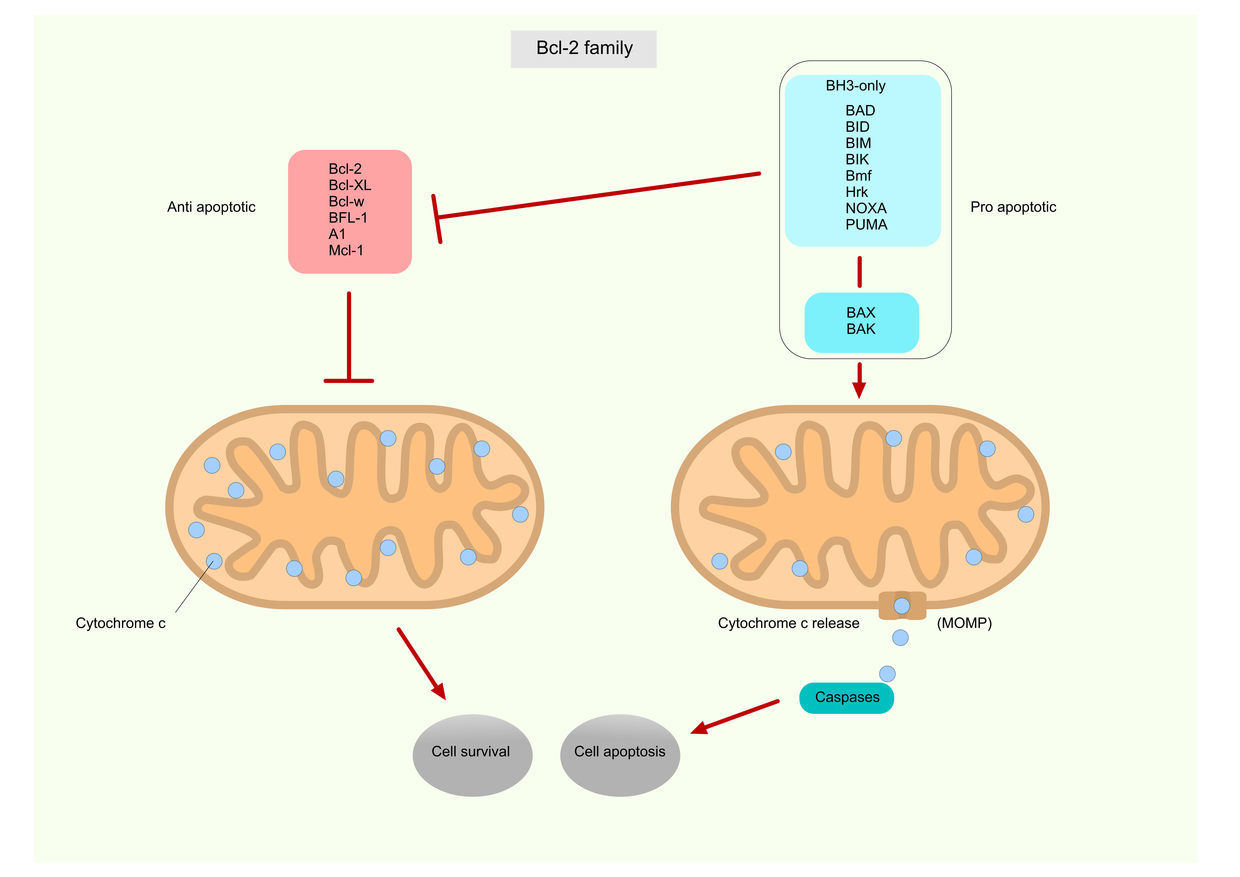 Lithium is known to modulate these apoptotic pathways.

The mitochondria are the energy powerhouses i.e. they produce energy in the form of ATP which the cell can use for its functioning. This process is called oxidative phosphorylation.

The heart and brain are two organs that require large amounts of energy which makes them susceptible to damage if this energy producing function is affected.

ROS are produced as a result of normal production of energy by the mitochondrion and are part of the natural defence system of the microglia to kill invading microorganisms. 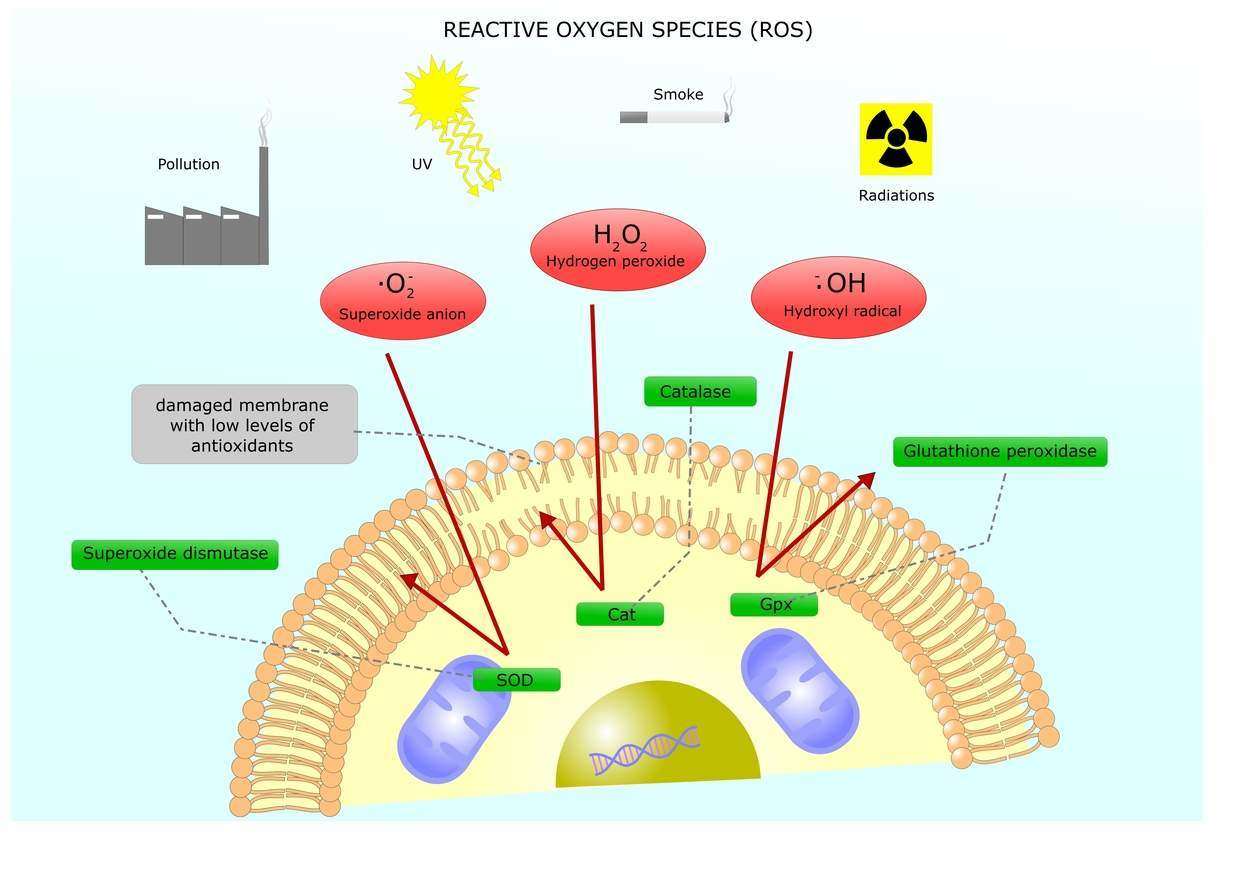 Under normal conditions, there is a balance of production of ROS, and homeostasis exists where energy metabolism is at the appropriate level in the mitochondrion, and the microglia are either at rest, because there is no infection, or are responding normally to an injury or infection.

ROS are essential for the normal function of the cell, and underproduction of ROS would lead to a decrease in energy production and a decrease in the ability of microglia to mount a defence against invading organisms.

The other end of the spectrum appears to be the situation in the ageing brain where increased ROS produced from the mitochondrion, and the microglia can lead to damage to lipids, DNA, and proteins.

The brain is especially susceptible to oxidative stress due to lower levels of antioxidant defences such as superoxide dismutase, catalase and glutathione peroxidase, Vit E and glutathione.

Oxidative stress results when the detoxification mechanisms of the body are overwhelmed by the oxidative reactions resulting in free radical damage. 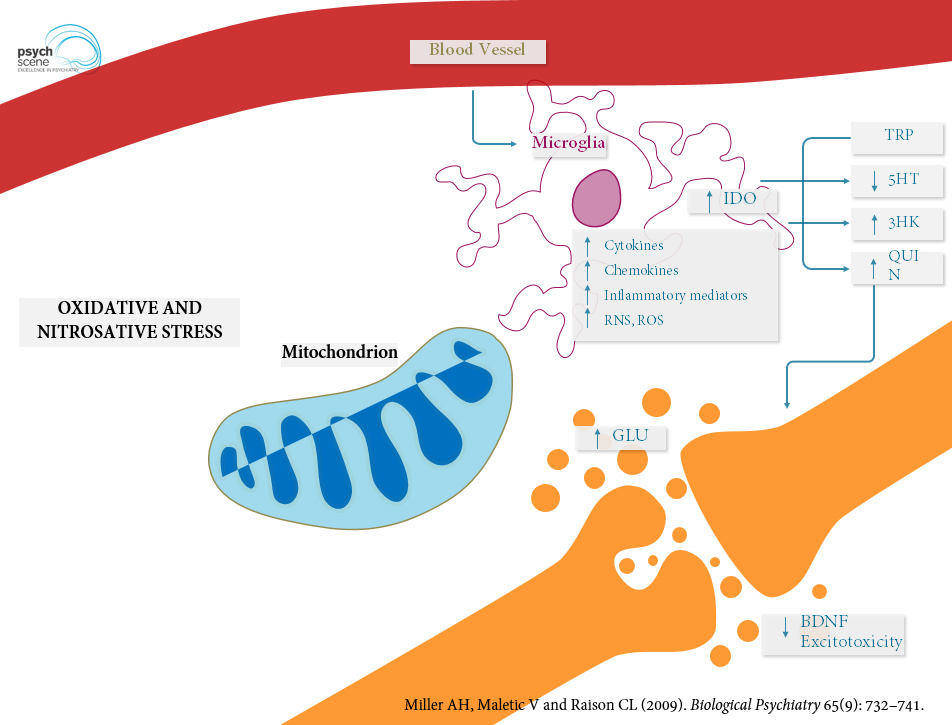 Lithium stimulates the mitochondrial respiratory chain complexes and in doing so protects against oxidative stress.

It is also known to increase levels of N-acetylaspartate (NAA), the marker of mitochondrial function as neuroprotection.

Watch this video by Prof Berk to learn more about oxidative stress.

Autophagy is the process that is present in response to cellular stress and is responsible for the creation of intracellular protein.

Autophagy is a self-degradative process that is important for balancing sources of energy at critical times in development and in response to nutrient stress. 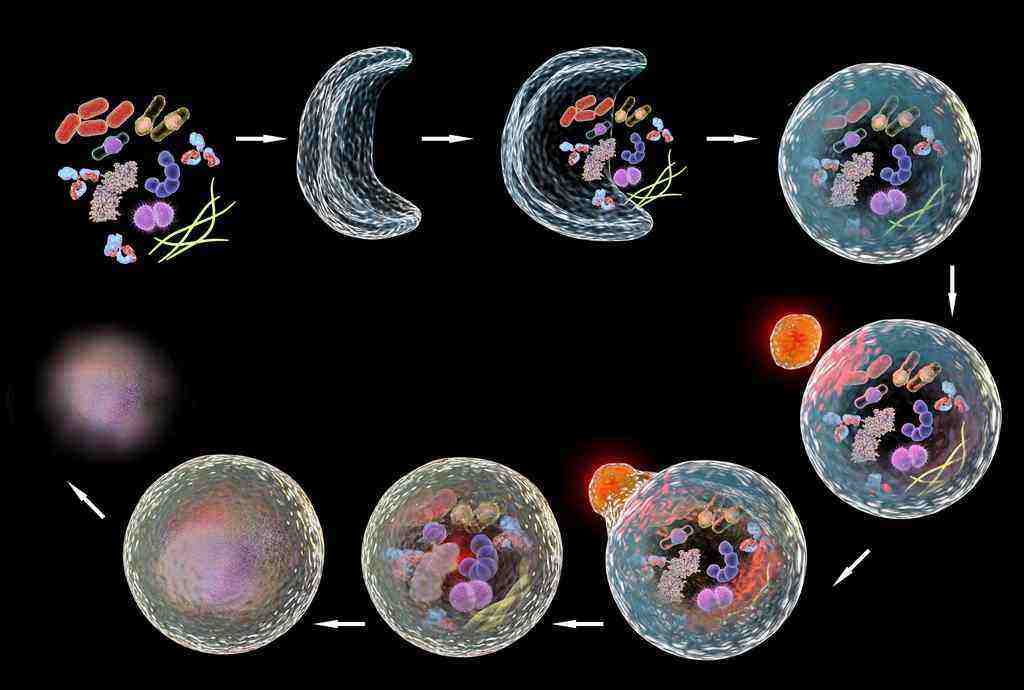 An autophagosome, a type of membrane-bound vacuole, exists for only around 10 to 20 minutes before fusing with a lysosome. A lysosome is an active organelle in cells that digests cell components which are no longer needed as well as bacteria.

The mammalian target of rapamycin (mTOR) is a negative regulator of the autophagic process. 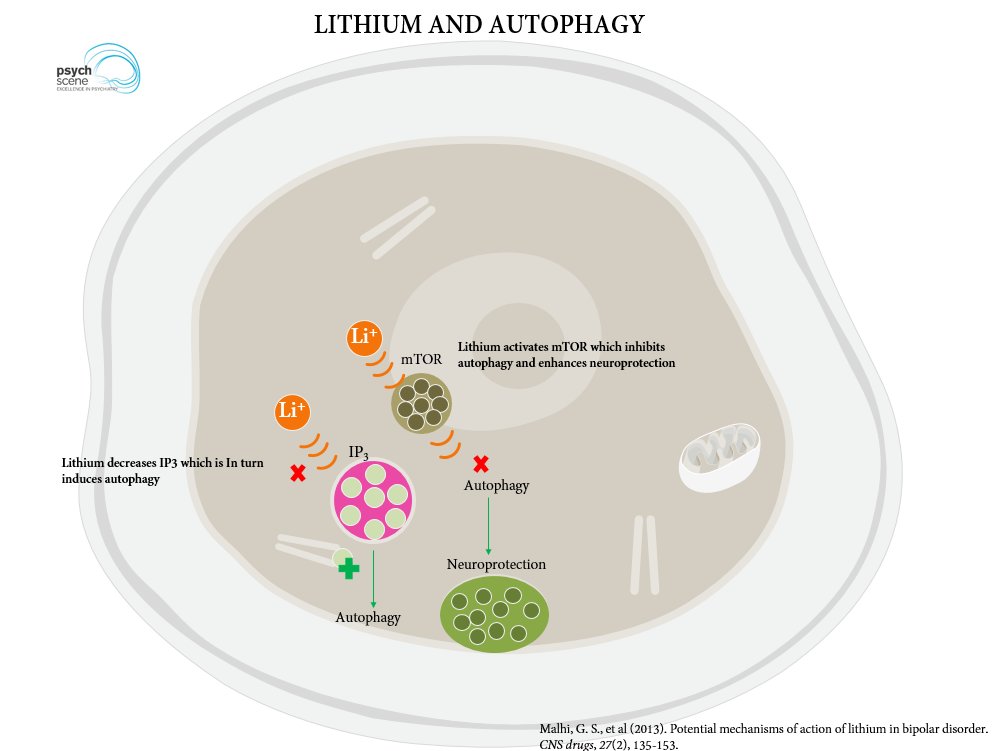 Lithium both reduces and induces autophagy

Hence lithium both inhibits and induces autophagy by reducing GSK-3 and IMPase respectively. 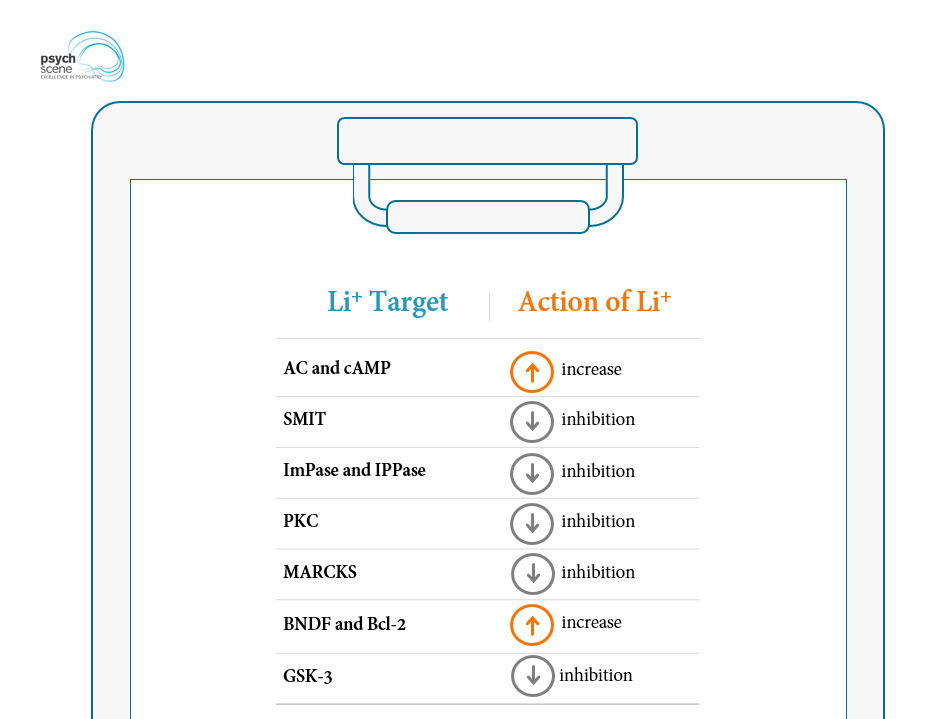 Thus,  lithium acts on a number of molecules and neurotransmitters that are involved in neurotransmission and intracellular apoptotic and neuroprotective pathways.

By researching the mechanisms of action, a complete picture of the actions is likely to emerge which may also provide insight into the pathophysiology of bipolar affective disorder.

Loading Lithium’s Mechanism of Action – A Synopsis and Visual Guide