Lithium is an evidence-based treatment in the acute and maintenance phases of bipolar affective disorder.

It is also an effective augmentation strategy in treatment-resistant depression and has anti-suicidal effects.

But Lithium has significant metabolic and endocrine adverse effects. With regards to the endocrine effects, hypothyroidism is the best recognised.

Another important side-effect is lithium-induced hyperparathyroidism leading to hypercalcaemia, which has a range of psychological and potentially serious physical manifestations.

A 46-year-old woman who had been stable on lithium for 10 years with one previous hypomanic episode was being investigated for renal cysts when her corrected calcium levels were found to be raised (2.63 mmol/L; normal range: 2.10-2.60 mmol/L ).

A renal ultrasound indicated small calculi. Her lithium was gradually ceased without any deterioration in the mental state. This normalized the calcium level but her PTH remains elevated at 9.7 pmol/L. Lamotrigine was considered as an alternative because she had predominant depressive episodes.

A 72-year-old woman who had been stable on lithium for 15 years was incidentally found to have elevated corrected calcium (2.77 mmol/L) by the endocrinologist.

PTH was found to be elevated at 13.7 pmol/L. There were no secondary effects of the hyperparathyroidism in the form of reduced bone density or renal calculi. The lithium was gradually reduced. after cessation of Lithium, the patient presented with features of mania and interspersed episodes of confusion 6 weeks after the cessation of lithium.

The patient was commenced on valproate. Her corrected calcium level normalised with a moderate reduction in PTH levels albeit above normal.

Clinical features: Classically the symptoms of hyperparathyroidism are described by the rhyme: [Lienert D & Rege S. 2008]

The psychiatric presentation can mimic a worsening of depression or mania.

In the event of a breakthrough depression or mania in patients on lithium therapy one should consider the differential of hyperparathyroidism prompting investigations for serum calcium and PTH level in addition to lithium levels, and other endocrine and metabolic parameters.

Low calcium should alert one to the possibility of secondary hyperparathyroidism usually due to lithium-induced nephrotoxicity.

Bone scan, parathyroid scan, renal ultrasound and electrocardiogram should be done to rule out secondary effects of hyperparathyroidism.

The exact mechanism of lithium-induced hyperparathyroidism is not known.[Meehan A et al., 2018] 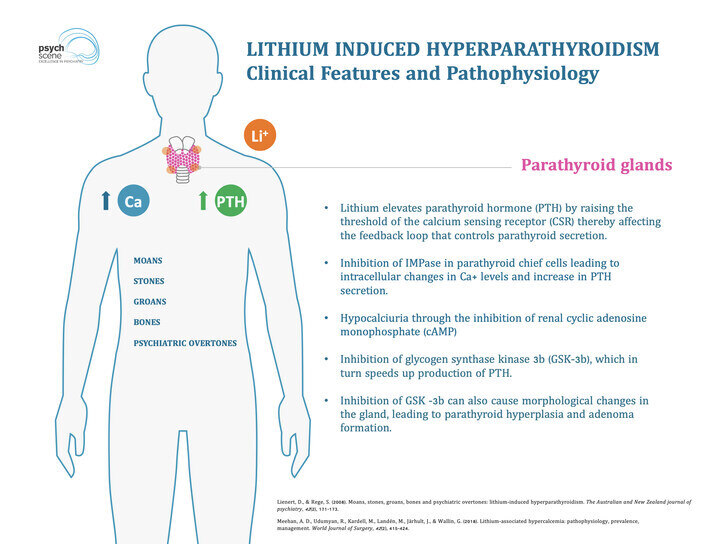 It is postulated that lithium blocks the influx of calcium into various cells.

It also raises the threshold of the calcium-sensing receptor (CSR) thereby affecting the feedback loop that controls parathyroid secretion.

Indirectly it acts by inhibiting the action of glycogen synthase kinase 3b (GSK-3b), which in turn has an inhibitory action on PTH. Thus it releases the brake to speed up the production of PTH. [Meehan A et al., 2018]

Hypocalciuria through the inhibition of renal cyclic adenosine monophosphate (cAMP) by lithium.

Lithium can also cause morphological changes in the gland (via inhibition of GSK-3b), leading to parathyroid hyperplasia and adenoma formation, which can cause persistent hyperparathyroidism despite lithium cessation.

There are no evidence-based monitoring or treatment strategies for lithium-induced hyperparathyroidism.

Guidelines do not specifically mention the monitoring of calcium levels with lithium therapy.

Some recommend that serum calcium level should be checked before commencing treatment with lithium and 6 monthly thereafter [Lienert D & Rege S. 2008] 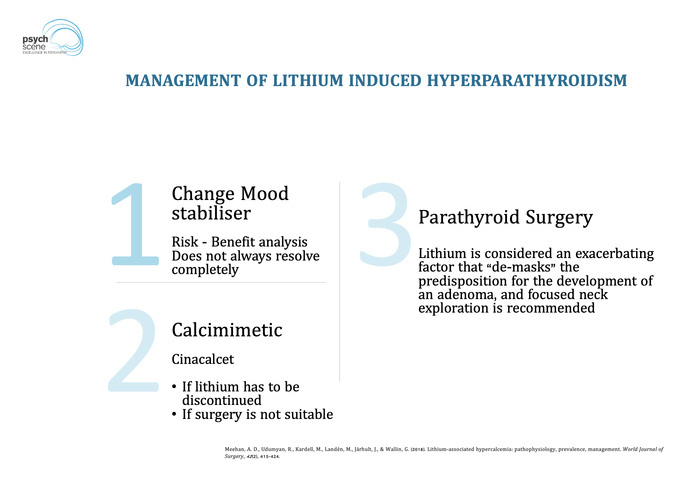 1. Any patient who is known to be hypercalcaemic or to have hyperparathyroidism prior to initiation of mood stabiliser therapy should not receive lithium.

2. Patients who develop lithium-induced parathyroid dysfunction can be switched to an alternate mood stabiliser after a careful risk-benefit analysis. Resolution, however, does not occur in all cases. [Meehan A et al., 2018]

3. In most cases, the hyperparathyroidism will resolve with cessation of lithium but in some cases, surgical intervention is required, that is, parathyroidectomy. There are no data on the duration or the probability of resolution. [Khandwala H & Van Uum S et al., 2006]

4. Calcimimetics e.g cinacalcet may be used in patients where lithium discontinuation poses a high risk of relapse or where surgery may not be suitable. [Szalat A et al., 2009]

5. Patients who require continued lithium treatment due to the complexity of their psychiatric illness may need calcimimetics or parathyroidectomy. The decision to continue lithium therapy in the presence of hypercalcaemia should be individualized. [Khandwala H & Van Uum S et al., 2006]

6. Close liaison with an endocrinologist or physician is advisable.

The monitoring of parathyroid function has only recently been included in the revised recommendations of NICE and the International Society for Bipolar Disorder. [Ng F et al., 2009]

Specific monitoring of calcium levels needs to be incorporated in the existing guidelines to alert the clinician to this common and potentially serious complication of lithium treatment. [Lienert D & Rege S. 2008]

ithium-associated hyperparathyroidism: report of four cases and review of the literature.

The Hub is a platform to share ideas, cases and concepts that bridge selling cryptocurrency the gap between academia and the real world. Think about it as the real world textbook, a platform rich with experiences. Many fields including medicine and psychiatry suffer from ‘closet’ ideas. Many brilliant solutions, the so called tacit knowledge, is embedded in the brains of people that do not have the platform to express them or at least reach a wider audience. The Hub is a device to unlock this knowledge and share it with the wider world. The Hub gives you an opportunity to make a difference.