Lithium-induced nephropathy has been reported since the 1970s and covers many kidney function impairments. [Kallner and Peterson 1995]; [Markowitxz et al 2000]; [McKnight et al 2012]

There are broadly three types of renal issues associated with Lithium:

Lithium’s Mechanism of Action – A Synopsis and Visual Guide

Lithium Prescribing and Monitoring in Clinical Practice – A Practical Guide

Although the peak age of onset of bipolar disorder is between 15 and 24 years, it has been reported that 14% and 36% of patients are diagnosed during childhood (≤12 years) or adolescence (13 to 18 years), respectively. [Leverich et al 2007]

As such, a substantial number of middle-aged patients with bipolar disorder will be at risk of lithium-induced nephropathy due to receiving lithium for >20 years.

Lithium induced nephropathy is a slowly progressive disease. The estimated eGFR declined by 0.71%/yr of age and 0.92%/year of treatment (30% more than that was associated with ageing alone), both by 19% more among women than men. [Tondo et al 2017]

Lithium is associated with an increased incidence (21-55%) of stage 3 CKD in those patients on long term lithium when compared to the general population.

Although only 4% of patients exhibit elevated serum creatinine levels after 6.5 years, this increases to 12% after 19 years of lithium therapy. [Muller-Oerlinhausen et al 2002]; [Belmaker 2004]

Epidemiological studies have shown that although renal insufficiency occurs in approximately 20% of patients, less than 1% of patients that have been administered lithium for >15 years develop end-stage renal disease [Bendz et, 2010].

While the relative risk of End-Stage Renal Disease (ESRD) compared to the general population is about eightfold, the estimated absolute incidence is low (0.2 to 0.7%).

The association between lithium and nephropathy is however confounded by comorbidities.

Although eGFR is impaired and serum creatinine levels increase, it has been suggested that these findings are significantly confounded by several bipolar disorder related lifestyle risk factors such as the increased risk for metabolic syndrome. [McCann et al 2008]; [McKnight et al 2012]

Clos et al. found that after adjustment for comorbidities, other medication use, and episodes of lithium toxicity in a longitudinal cohort study they found no increase in the risk of renal dysfunction for those who have a baseline eGFR higher than 60 ml/min/1.73m2    [Clos et al, 2015]

Thus, it is unclear how direct the risk is for developing lithium-induced nephropathy. Risk factors associated are as follows: 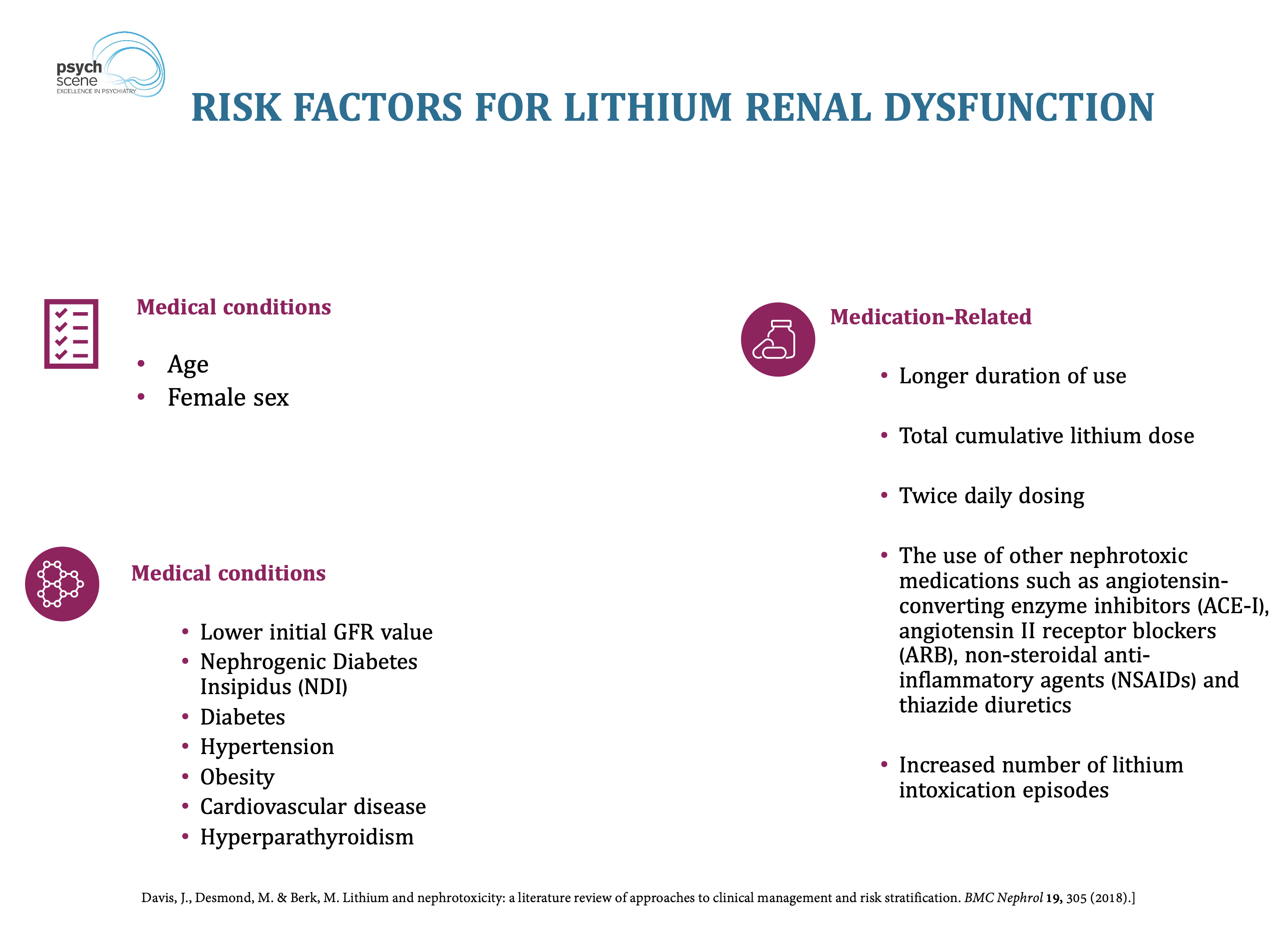 Lithium is a monovalent cation filtered through the glomeruli with ≤80% reabsorbed in the proximal renal tubule.

However, a tiny fraction is reabsorbed through the epithelial sodium channel (ENaC), which then accumulates in the distal parts of the nephron, where it inhibits glycogen synthase kinase (GSK-3β). [Rao et al. 2005]

GSK-3β is primarily involved in glycogen metabolism but is also associated with regulating water and sodium transport in the kidney. [Gould and Manji 2005]

GSK-3β has been hypothesised to play a central role in the molecular effects of lithium-induced tubular dysfunction. During lithium treatment:

Therefore, it is surmised that prolonged lithium treatment is associated with distal tubular acidosis, which then manifests into interstitial fibrosis and CKD. 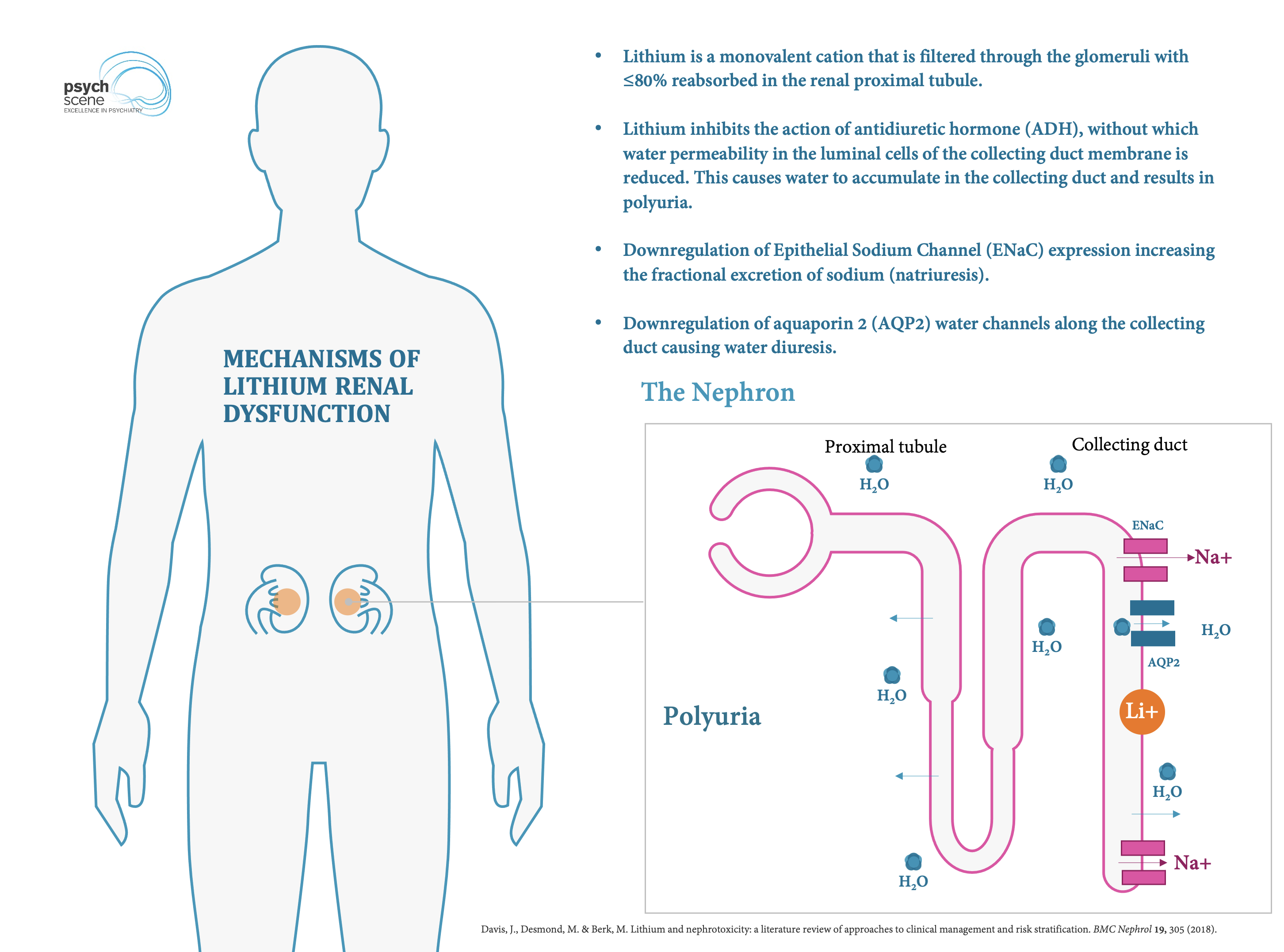 Early identification of nephrotoxicity requires regular renal function monitoring, with the NICE guidelines recommending testing every 6 months and the APA recommending every 2 to 3 months during the first 6 months followed by 6-month intervals [APA 2002] ; [NICE 2014].

Measuring only serum urea and creatinine is no longer preferred with eGFR calculations now standard practice.

Not all patients taking lithium experience glomerular adverse effects, with only 40% of patients reporting mild symptoms of polyuria, nocturia, and polydipsia. [Stone 1999]

However, lithium-induced nephropathy is typically asymptomatic with no proteinuria present and measures such as a patient’s urinary sediment levels are generally reported as normal.

The evidence for lithium-induced proteinuria as a marker for nephropathy is unclear despite its utility in predicting CKD.

Guideline recommendations on the parameters that should be monitored, as well as the frequency of monitoring, are heterogeneous with a substantial variety of factors that need to be considered before a decision on whether to cease lithium therapy [Davis et al. 2018]:

Furthermore, evidence-based literature analysis has also suggested improvements are only feasible during the first 6 years of lithium exposure. [Grandjean and Aubry 2009]

Lithium is an established and gold standard psychotropic drug for bipolar disorder, and a careful risk-benefit analysis should be carried out before lithium cessation is considered.

Management of Renal Dysfunction with Lithium

Lithium induced nephropathy may continue to progress despite cessation of lithium and may even do so at a relatively innocuous creatinine clearance of <40 ml/min or creatinine level of < 220 mmol/L (a time where patients could still be asymptomatic from their CKD). Therefore guidelines have proposed a lower creatinine clearance level to involve specialist nephrology input. [Davis et al. 2018]

Lithium discontinuation and replacement with an alternative should be considered; however, this needs to be weighed up against the significant increase in relapse and suicidal risk.

A study looked to establish whether lithium or anticonvulsant should be used for maintenance treatment for bipolar affective disorder (BPAD) if the risks of suicide and relapse were traded off against the risk of end-stage renal disease (ESKD). The final endpoint was 30 years of treatment with five outcomes: death from suicide, alive with stable or unstable BPAD, alive with or without ESRD.

Lithium initiation and continuation, even in the presence of long-term adverse renal effects should be recommended in most cases.

The exception to the above is if the likelihood of progression to end-stage renal disease exceeds 41.3% or anticonvulsant medication outperforms lithium in relapse prevention.[Wernecke et al. 2012]

Another study found that CKD was observed in one-fourth of patients with Bipolar Disorder receiving long-term lithium therapy. There was no significant difference in CKD progression amongst patients that continued Lithium versus those that discontinued, at the mean follow-up duration of 4.2 years, after the CKD diagnosis. The authors concluded that CKD progression could be influenced by existing comorbidities and may not necessarily be due to lithium alone. [Pahwa et al., 2021].

Discontinuation of lithium leads to improvement in renal function or at least less rapid deterioration in most patients.[Hoekstra et al., 2022]

A process of shared informed decision making is essential, incorporating the person’s viewpoint on the available choices and their consequences. This is a decision best made gradually over time, in consultation with their treating psychiatrist, nephrologist, primary care physician and significant others if appropriate. If lithium is ceased, this should be done very gradually and with close monitoring, together with understanding of early warning signs and engagement of caregivers if appropriate. [Davis et al. 2018]

There is substantial epidemiological, biological, and clinical data that show long-term lithium therapy increases the risk for CKD.

For some patients, lithium therapy is of paramount importance and therefore discontinuation may not be feasible due to the risk of relapse.

At present, there is a strong requirement for a collaborative decision-making process to guide the management of patients with lithium-induced nephropathy.

Renal failure occurs in chronic lithium treatment but is uncommon

Lithium and nephrotoxicity: a literature review of approaches to clinical management and risk stratification.

Management of the renal adverse effects of lithium

Renal function after withdrawal of lithium.

Schoot T et al., Systematic review and practical guideline for the prevention and management of the renal side effects of lithium therapy. Eur Neuropsychopharmacol. 2020;31:16-32.