Internet gaming is a viral modern global leisure activity defined as playing or interacting with digital forms of entertainment on a personal computer, laptop or games console. [Przyblski et al., 2017]

Players can play alone or with others, passively or competitively, and success is defined by each game manufacturer’s chosen parameters. [Griffiths 2016]

Internet gaming disorder is characterised by criteria where excessive internet gaming is coupled with other features common to other addictions.

Internet gaming disorder is subtly different from internet addiction in that it focuses specifically on gaming rather than wider online activities such as searching the internet or using other online platforms such as chat rooms. [Griffiths 2016]

Social Networking Addiction – Is Excessive Use of the Internet and Social Media a Behavioural Addiction?

The global prevalence of internet gaming disorder (IGD) stands at around 1­ – 1.6%, though methodological inconsistencies have hindered accurate study appraisal. [King and Delfabbro 2018]

In a multination evaluation of internet gaming in more than 20 countries, the disorder was more prevalent among teenage boys. [Cheng 2018]

The prevalence of DSM-5 internet gaming disorder in a national sample of (mean age of 13.5) Slovenian school-age children was around 2.5%. [Pontes et al., 2016]

In another European study, including Germany, Greece, Iceland, The Netherlands, Poland, Romania and Spain, an additional 5.1% of adolescents were deemed at risk of developing the disorder and in China and Taiwan, rates of pathological gaming were 10% and 7.5% respectively, possibly due to gaming’s acceptance as a high-value competitive sport. [Muller et al., 2015]

Videogame-related distress was first reported in 1983 by two school counsellors who noticed compulsive behaviour, withdrawal and lack of motivation when their teenage pupils were asked to stop playing video games. [Soper and Miller 1983]

Although successful treatments led to improved credibility in recognising gaming disorder as a treatable condition, research focused on gaming preoccupation rather than gaming addiction. Studies were often anecdotal or observational. [Griffiths 2016]

In the 1990s, research on gaming addiction widened to include personal computers, consoles, and arcade machines due to the increasing availability of home computers. [Przyblski et al., 2017]

Researchers adapted the existing DSM-III and DSM-IV gambling criteria as they believed that the psychopathology of internet addiction closely matched that of substance addiction.

The 11th version of the International Classification of Diseases (ICD-11) has officially included gaming disorder as a mental disorder. [World Health Organization 2018]

Despite growing interest in IGD as a treatable disorder, there is an ongoing debate about whether IGD can be considered an addiction. Past studies have been criticised for relying on the perception that gaming disorder is an addiction rather than a coping mechanism. [Gupta et al., 2021]

One school of thought is that IGD is a non-substance addiction, and the other is that it is simply a coping technique, a good stress reliever which shouldn’t be pathologised [Gupta et al., 2021], or a transient phase. [Kuss et al., 2017]

Common comorbidities include anxiety, depression and attention deficit hyperactivity disorder (ADHD). In some studies, children with ADHD were found to have high impulsivity scores, which have accurately predicted IGD development. [Gupta et al., 2021]

Genetic studies have also identified a higher prevalence of two specific polymorphisms in those with IGD. [Han et al., 2007]

As comparable levels have been seen in individuals with substance addiction, there may be a genetic component to IGD, warranting further research as new genetic techniques become available. 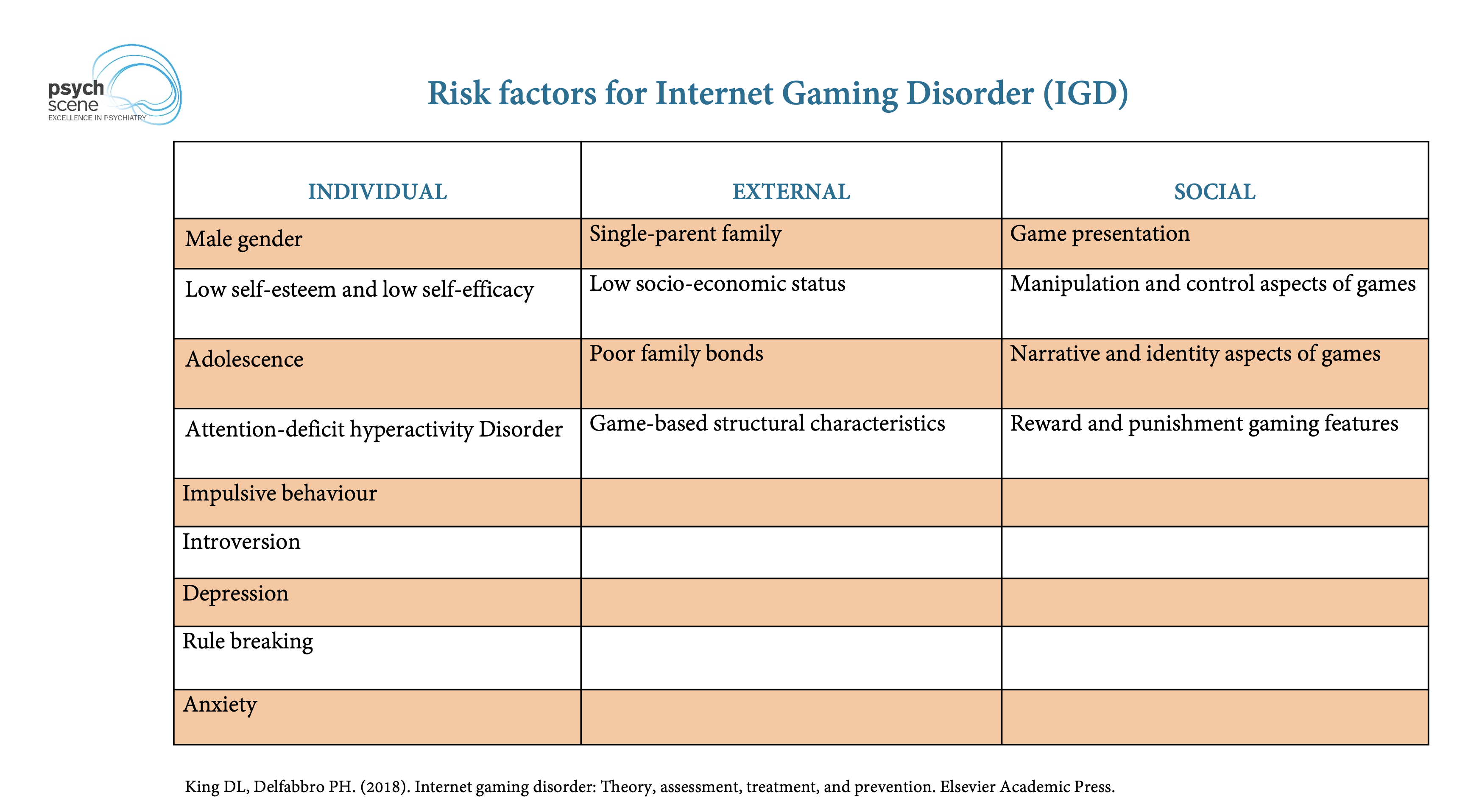 Internet Gaming Disorder (IGD) is defined in the ICD-11 as: [World Health Organization 2018]

A pattern of gaming behaviour (“digital-gaming” or “videogaming”) characterized by impaired control over gaming, increasing priority given to gaming over other activities to the extent that gaming takes precedence over other interests and daily activities, and continuation or escalation of gaming despite the occurrence of negative consequences.

Persistent and recurrent use of the Internet to engage in games, often with other players, leading to clinically significant impairment or distress.

Internet gaming disorder is subtly different from internet addiction in that it focuses specifically on gaming rather than wider online activities such as searching the internet or using other online platforms such as chat rooms. [Griffiths 2016]

IGD is diagnosed if five (or more) of the following nine criteria are present over 12 months: [American Psychiatric Association 2013].

The 11th version of the International Classification of Diseases (ICD-11) has officially included gaming disorder as a mental disorder. According to the ICD-11, all criteria must be present.

Because there has been no clear definition of IGD until recently, many studies have used ad-hoc assessment tools and only one study published after 2013 used DSM-5 criteria. [Sakuma 2017]

Assessments in current circulation include:

The following treatments have been trialled in small samples with a minimal evidence base.

Internet gaming is an incredibly popular social activity among people of all ages worldwide, and it gives players chances to immerse themselves in alternate worlds for competition or pleasure. [Gupta et al., 2021]

If players lose control over their gaming and it begins to interfere with their daily lives, an internet gaming disorder (IGD) may develop, and further assessment and treatment may be warranted. [World Health Organization 2018]

There is a current lack of professional consensus around valid and reliable methods of assessment, diagnosis and treatment for IGD [Gupta et al., 2021]: The new ICD-11 definition, published in 2022, has been criticised for its weak evidence-base and the DSM-5 identifies internet gaming disorder as a possible clinical condition meaning that it cannot yet be diagnosed in practice.

The evolution of Internet addiction: A global perspective

The motivational pull of video games: A self-determination theory approach

Chaos and confusion in DSM-5 diagnosis of Internet Gaming Disorder: Issues, concerns, and recommendations for clarity in the field.

Internet gaming disorder in children and adolescents: a systematic review.

Chapter 8 - Response inhibition and addiction medicine: from use to abstinence

The cognitive psychopathology of internet gaming disorder in adolescence

The effect of methylphenidate on Internet video game play in children with attention-deficit/hyperactivity disorder.

Effectiveness of atomoxetine and methylphenidate for problematic online gaming in adolescents with attention deficit hyperactivity disorder.

Comparative study of the effects of bupropion and escitalopram on Internet gaming disorder.

Combined cognitive behavioral therapy and bupropion for the treatment of problematic on-line game play in adolescents with major depressive disorder.

Treatments of internet gaming disorder: a systematic review of the evidence.