Inflammation and Depression – A Simplified Guide

A novel and emerging framework describes the involvement of inflammation and the immune system in the pathophysiology of depression.

The PATHOS-D hypothesis states that depressive symptoms are components of the immune system that promote pathogen defence. [Raison and Miller, 2013]

Depression has significant heritability, yet from an evolutionary perspective, it is maladaptive and presents significant survival and reproductive disadvantages. Allelic variants that enhance the risk of depression are common in the human genome and persist even in the face of Darwinian fitness.

The PATHOS-D hypothesis proposes that modern humans have a bias towards inflammation because it was beneficial to our ancestors. [Miller and Raison, 2016] 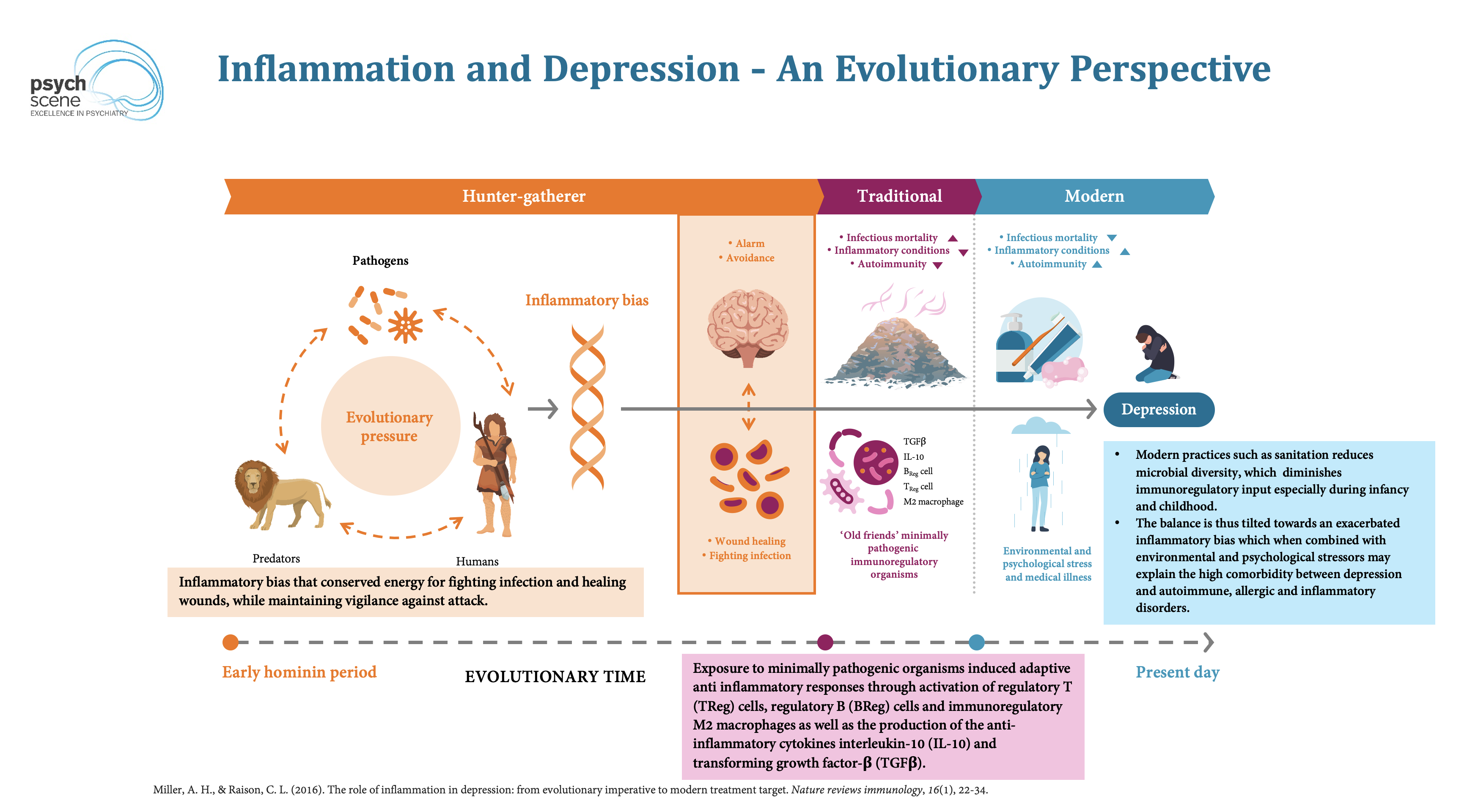 There is an important relationship between mammals and micro-organisms that has driven human evolution:

In addition, genes associated with depressive symptoms were advantageous to our ancestors because they were implicated in social behaviours that promoted host survival [Slavich and Irwin, 2014]:

Exposure to threats activated a Conserved transcriptional response to adversity (CTRA) that involved up-regulation of pro-inflammatory immune response genes, which combat extracellular pathogens and wound-related bacterial infections, and down-regulation of antiviral immune response genes, which target intracellular pathogens such as viruses. This redeployment of the leukocyte basal transcriptome is adaptive in the context of actual physical threat because it enhances wound healing and recovery from injury and infection. The CTRA can also be activated by modern-day social, symbolic, anticipated, and imagined threats, however, leading to increased risk for several inflammation-related conditions, including depression.

However, there is an increased prevalence of immune dysregulation in the form of autoimmune, allergic and inflammatory diseases in today’s modern way of life. [Raison et al., 2010]

Improvement of sanitary practices has reduced the microdiversity of commensal and symbiotic microbial cells present in the human microbiome:

As well as both genetic and environmental factors, depressive symptoms are frequently associated with inflammatory diseases.

Most notably, there is an increase in chemokines and inflammatory cytokines in Major Depressive Disorder (MDD) patients, impacting disease duration and the severity of mood episodes. [Miller A et al., 2009] 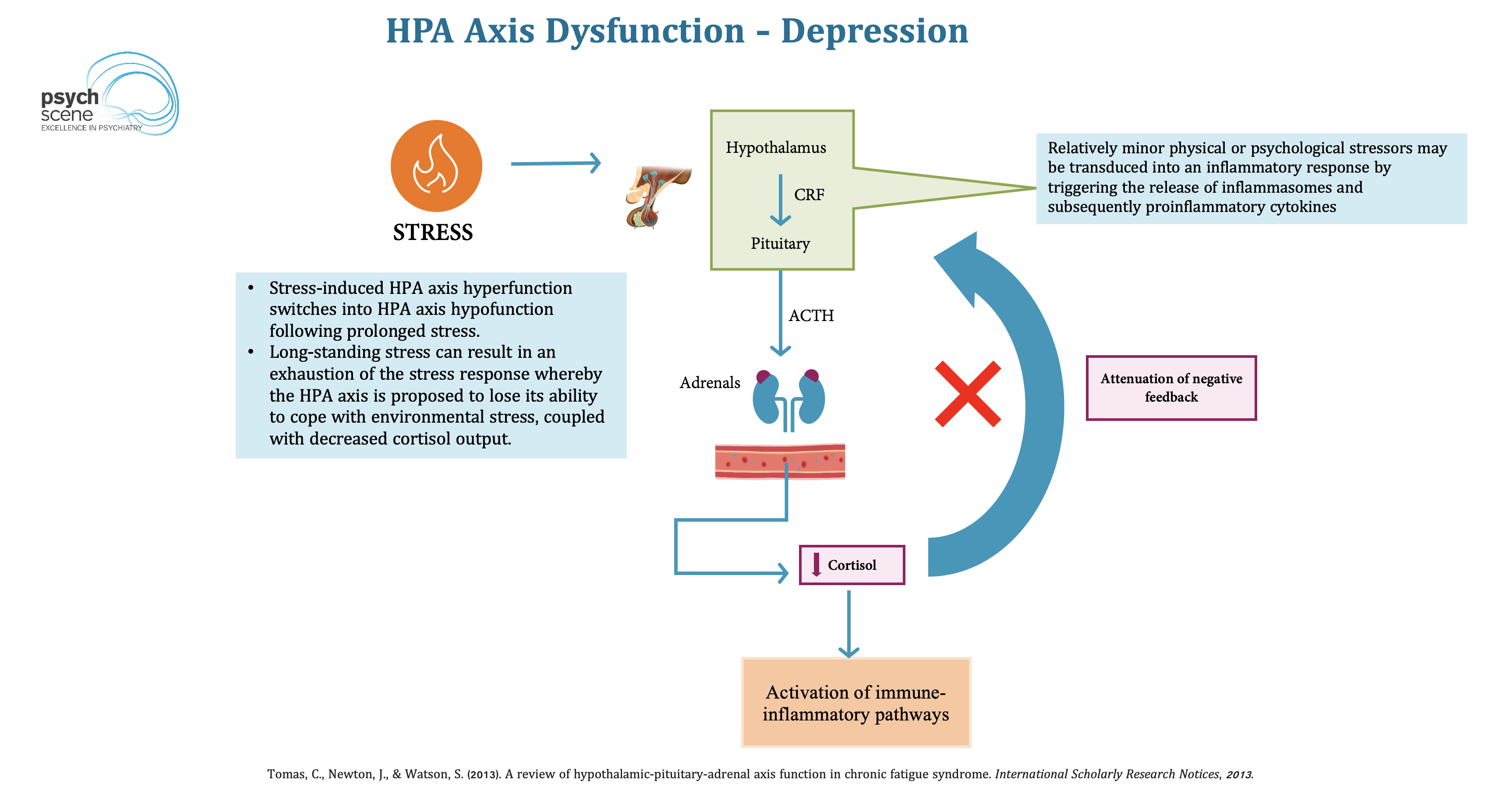 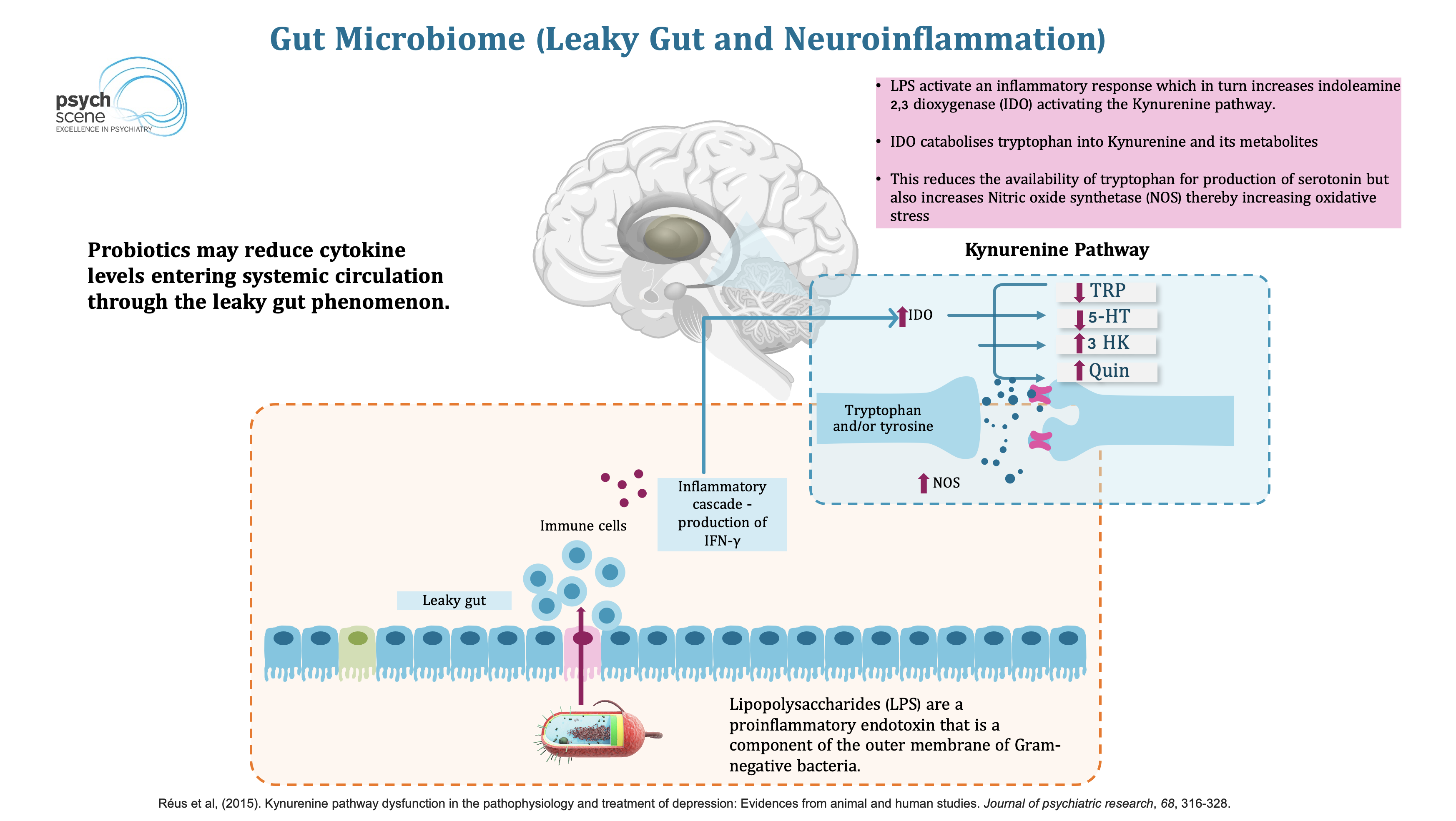 Read a detailed review on the Gut microbiome and depression. 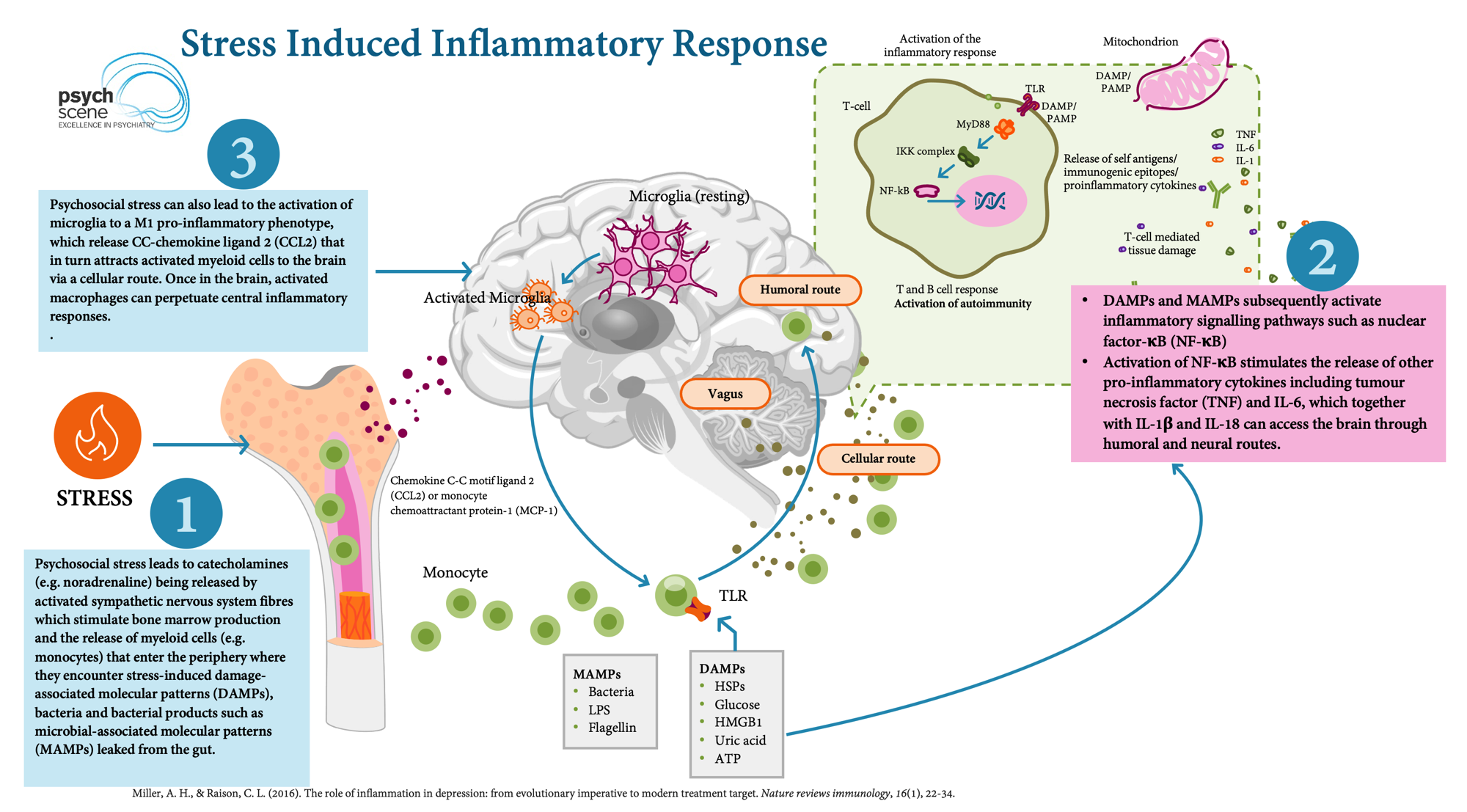 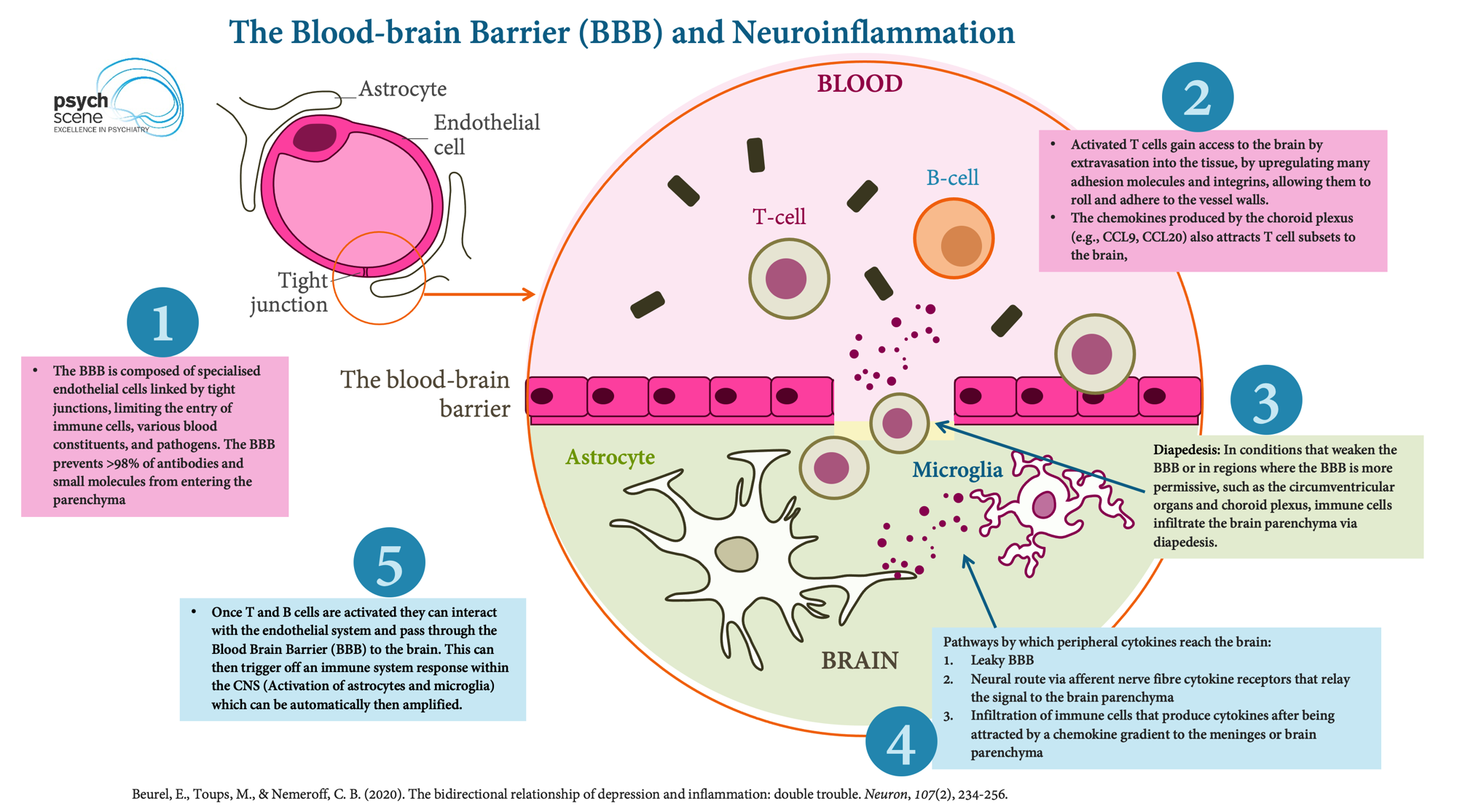 At present, clinical data is scarce:

Cytokine targets in the CNS involve:

Inflammation and its Relationship with Serotonin and Glutamate: 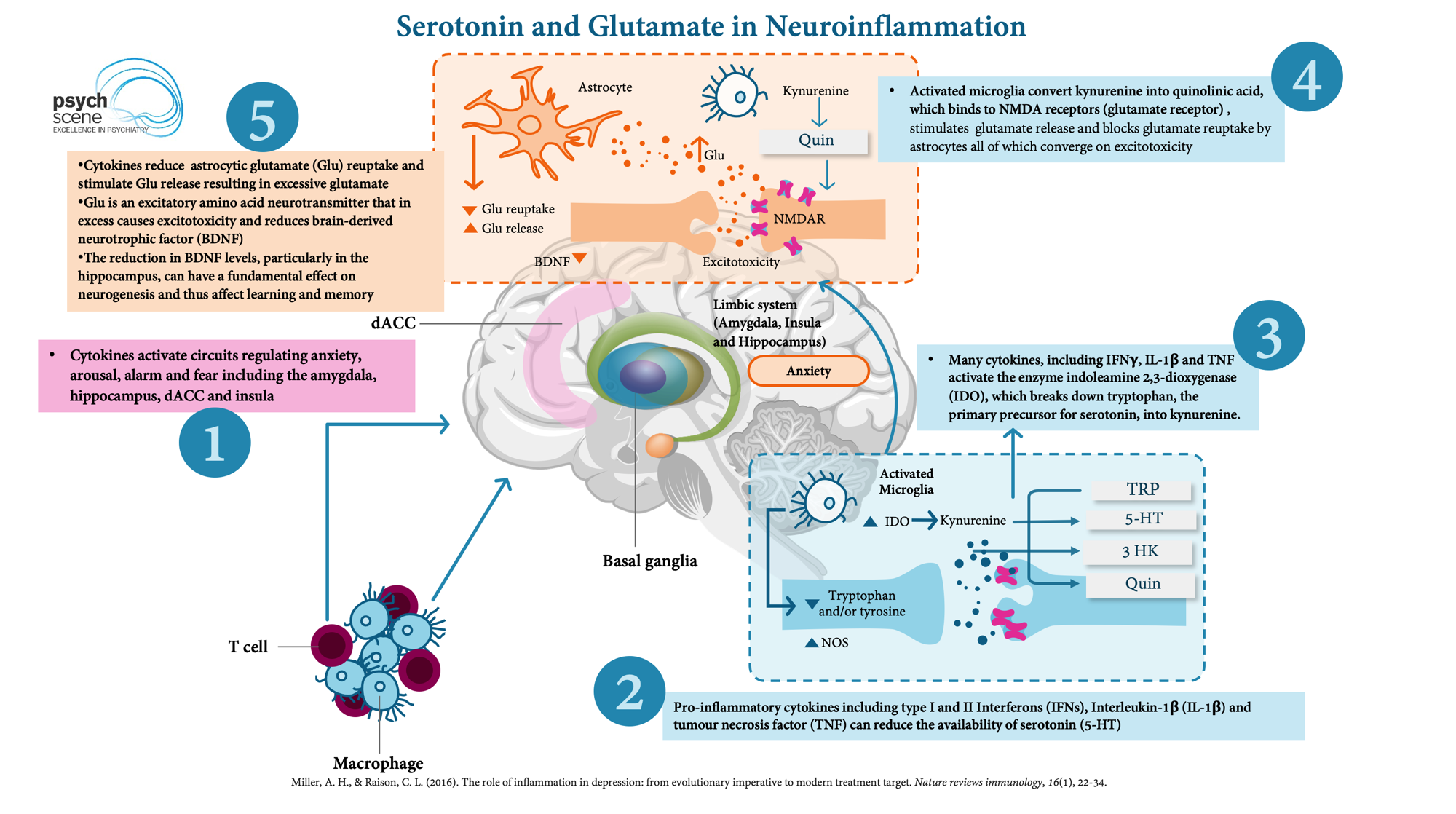 Inflammation and its Relationship with Dopamine: 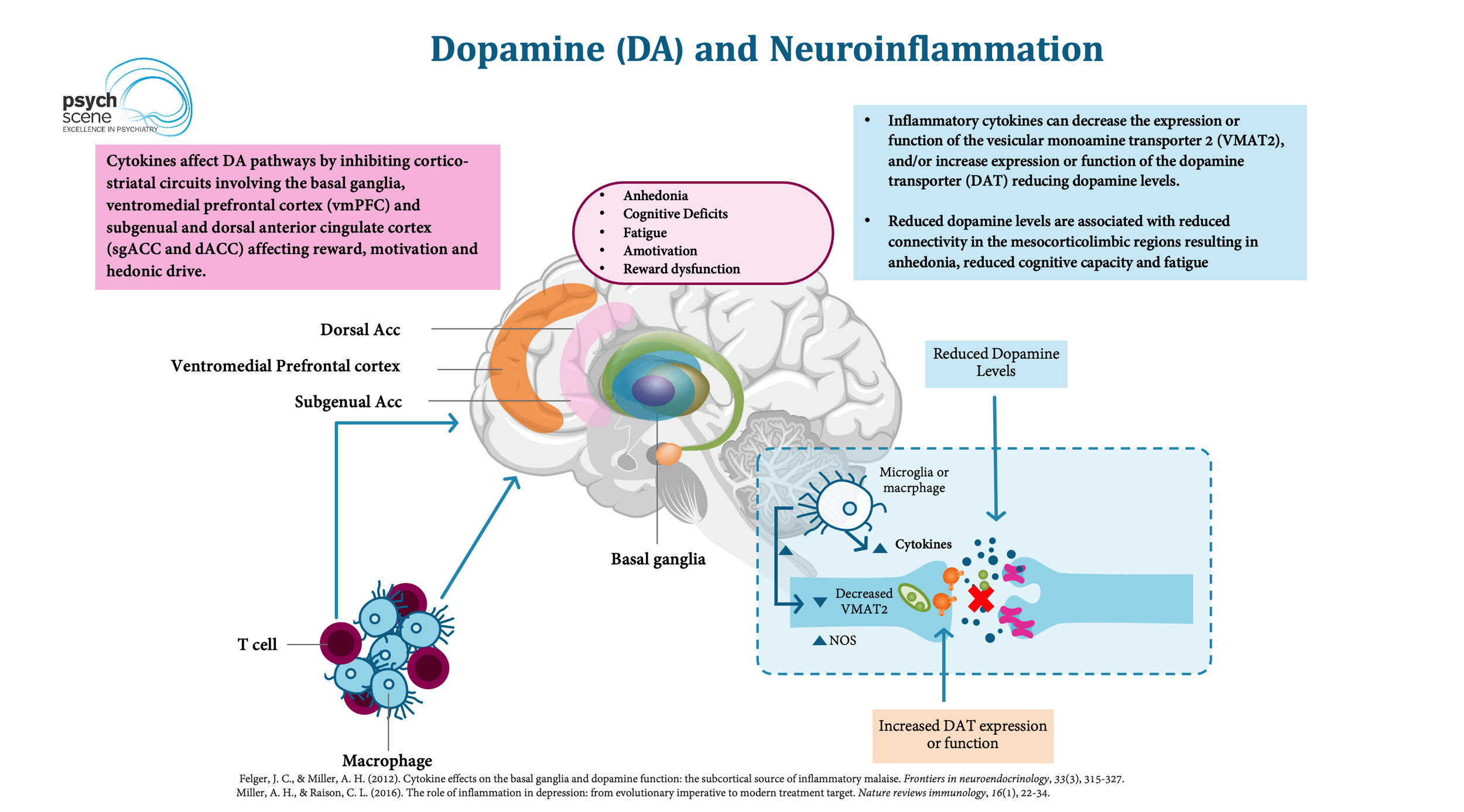 INFLAMMATION AND CLINICAL FEATURES OF DEPRESSION

Increased inflammatory markers have been associated with atypical symptoms of depression and with suicidal MDD.

Furthermore, trauma is also closely associated with inflammation and depression. The co-occurrence of MDD and inflammation is present in individuals with a history of childhood adversity but not in those without the latter.

Individuals with exposure to Childhood sexual abuse and trauma are at risk of Chronic fatigue syndrome and fibromyalgia, which have strong inflammatory underpinnings.

Read more on the Neurobiology of PTSD and Complex PTSD.

The current data suggests only a subgroup of patients would receive any meaningful benefit; those who show increased peripheral inflammation (e.g. individuals with medical conditions including osteoarthritis and psoriasis).

However, in patients with depression who do not show elevated peripheral levels of inflammation, anti-inflammatory treatments may impair placebo responses that contribute to the effectiveness of all known antidepressant modalities. [Kohler O, et al. 2014], [Raison CL, et al, 2014]

Read about minocycline in more detail.

Read more about the mechanisms of SSRIs beyond the serotonergic hypothesis.

The largest meta-analysis of 45 studies representing 1517 MDD patients revealed that antidepressant treatment significantly decreases peripheral levels of IL-6, TNF, IL-10, and CCL2, but these were not associated with treatment response. [Köhler et al., 2018]

Combination therapy of Bupropion and SSRI was associated with a greater reduction of treatment severity in individuals with elevated baseline levels of IL-17A at baseline. IL-17 putatively disrupts the blood-brain barrier and affects dopamine synthesis, whereas dopamine has been shown to decrease Th17 cell-mediated immune response. [Jha et al., 2017]

The authors reported an increased risk for infections, and all studies showed a high risk of bias.

Effect of the Mediterranean Diet On Depression By Prof Michael Berk

Depression and inflammation exist in a bi-directional relationship.

A subset of patients with MDD has inflammation underpinning the pathogenesis of the illness.

With an increased understanding of the complex nature of the brain-immune interaction, there is the possibility of discovering anti-inflammatory agents with antidepressant properties. Targeting inflammation in depression may help develop effective antidepressant treatments that go beyond the current neurotransmitter hypothesis of antidepressants.

Research is, however, in the early stages and many questions remain unanswered.

The evolutionary significance of depression in Pathogen Host Defense (PATHOS-D)

The role of inflammation in depression: from evolutionary imperative to modern treatment target

Miller A and Raison C. The role of inflammation in depression: from evolutionary imperative to modern treatment target. Nat Rev Immunol. 2016.

From stress to inflammation and major depressive disorder: a social signal transduction theory of depression

Inflammation, sanitation, and consternation: loss of contact with coevolved, tolerogenic microorganisms and the pathophysiology and treatment of major depression

Rook G et al., Hygiene and other early childhood influences on the subsequent function of the immune system. Brain Res. 2015.

Inflammation and its discontents: the role of cytokines in the pathophysiology of major depression

Miller A et al., Inflammation and its discontents: the role of cytokines in the pathophysiology of major depression. Biol Psychiatry. 2009.

Monocyte trafficking to the brain with stress and inflammation: a novel axis of immune-to-brain communication that influences mood and behavior

Wohleb E et al., Monocyte trafficking to the brain with stress and inflammation: a novel axis of immune-to-brain communication that influences mood and behavior. Front Neurosci.

Is there a role for glutamate-mediated excitotoxicity in inflammation-induced depression?

Dantzer R and Walker A. Is there a role for glutamate-mediated excitotoxicity in inflammation-induced depression?. J Neural Transm. 2014.

The neuroactive potential of the human gut microbiota in quality of life and depression.

Inflammasomes in neuroinflammation and changes in brain function: a focused review

Nod-like receptor pyrin containing 3 (NLRP3) in the post-mortem frontal cortex from patients with bipolar disorder: A potential mediator between mitochondria and immune-activation

Learning and memory ... and the immune system

Marin I and Kipnis J. Learning and memory… and the immune system. Learn Mem. 2013.

The bidirectional relationship of depression and inflammation: double trouble

Neuroinflammatory and morphological changes in late-life depression: the NIMROD study.

A randomized controlled trial of the tumor necrosis factor antagonist infliximab for treatment-resistant depression: the role of baseline inflammatory biomarkers

Efficacy of Adjunctive Infliximab vs Placebo in the Treatment of Adults With Bipolar I/II Depression: A Randomized Clinical Trial

Celecoxib enhances the effect of reboxetine and fluoxetine on cortical noradrenaline and serotonin output in the rat. Prog Neuropsychopharmacol Biol Psychiatry 2012;39:143–148.

The anti-inflammatory role of SSRI and SNRI in the treatment of depression: a review of human and rodent research studies

Dionisie, V., Filip, G.A., Manea, M.C. et al. The anti-inflammatory role of SSRI and SNRI in the treatment of depression: a review of human and rodent research studies. Inflammopharmacol 29, 75–90 (2021).