There is increasing evidence of the emerging link between Autoimmunity and Psychiatric Disorders. [Kayser and Dalmau, 2011].

This case is one of several that provides further compelling evidence for the role of autoimmune mechanisms in the pathogenesis of psychiatric disorders and the need for vigilance for autoimmunity in psychiatric practice. [Rege S & Hodgkinson S, 2014]

Two of the main aspects of the presentation pointing towards atypicality were fluctuating cognition and significant short-term memory dysfunction. Also, the absence of a family history of psychiatric disorder, drug use and a viral prodrome two weeks prior raised the suspicion of a possible organic cause.

THE ROLE OF ELECTROENCEPHALOGRAM (EEG)

The above pattern was not considered significant or definitive of an organic cause. Hence another sleep-deprived EEG was obtained.

The sleep-deprived EEG showed an abnormal EEG due to ‘the presence of generalised slow wave activity’.

An empirical trial of Methylprednisone (1g/day for five days) was instituted in collaboration with a neuroimmunologist. The patient responded dramatically within three days and showed a marked
improvement in her mental state.

She was then transitioned to 1 mg/kg/day of prednisone in two divided doses. Prednisone was gradually ceased over two weeks which resulted in a relapse two weeks later.

A Trial of Intravenous Gamma Globulin (IV IGG) was unsuccessful. Plasmapheresis was trialled with good response in 2 days.

She was discharged on Mycophenolate 1 g BD which was changed after two months to Azathioprine 100 mg daily.

The psychiatric medication was reduced and ceased. The patient remained in complete remission for six months and was maintained on a low dose of Azathioprine 25 mg BD. Azathioprine was also further reduced and ceased, and the patient remained in remission for a further eight months on no medication. No further admissions occurred during this period.

WHAT DID WE FIND? 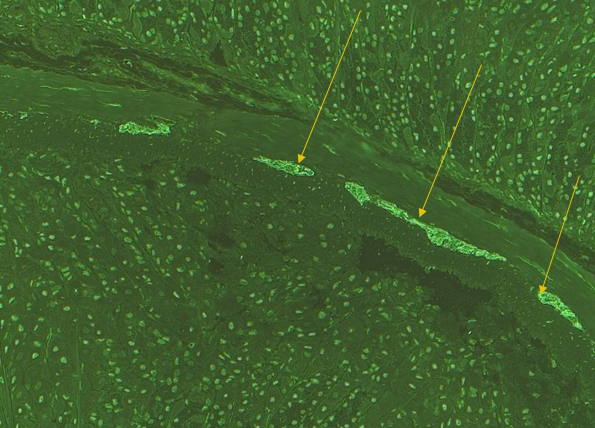