The Gut Microbiome has been called a superorganism. The fetal gut is sterile, and yet in the average human adult, there are over 100 trillion bacteria in the intestinal tract, which is more than 10 times the number of human cells in the entire human body.

In addition, there are estimated to be over 10 million microbial genes, which is 150 times more than the human genome. [Anglin et al. 2015]

The symbiotic connections between the gut microbiota and the brain are evident, and several pathways have been identified: collectively known as the microbiota-gut-brain (MGB) axis. The MGB axis is bidirectional and includes neural, humoral, and immune mechanisms. [Collins et al. 2012]

Simplified Guide to the Gut-Brain Axis

Experimental evidence from germ-free (GF) mice models has shown that the gut microbiota has an important role in the development and function of the central nervous system; these findings have then been used to make informed hypotheses on the origins of several human psychiatric disorders:

The pathophysiology of major depressive disorder (MDD) is complex and involves an imbalance in neurotransmitters, a dysfunctional HPA axis, inflammation, and the MGB axis.

Research suggests that the presence of abnormal microbiota or a dysfunctional MGB axis may directly induce psychiatric disorders such as MDD and therefore correcting these disturbances could alleviate depressive symptoms.

In the human gut, there are 12 different phyla of which over 90% is made up of Proteobacteria, Firmicutes, Actinobacteria and Bacteroidetes.

Firmicutes, in particular, have been shown to have significant phyla differences between patients with depression and healthy controls. [Jiang et al. 2015]

Although there is a paucity of data from studies that have enrolled patients with psychiatric illness, the first population-based study was published in February 2019. This study investigated whether there were any correlations between specific gut bacteria and depression in a Flemish population cohort (n=1,054). [Valles-Colomer et al. 2019] In this study:

These findings add considerable weight to the unique dysbiotic relationship between the gut microbial community (and microbial metabolites) with intestinal inflammation and reduced quality of life and mental wellbeing.

The microbiota hypothesis posits that MGB axis dysfunction forms an important part of the pathological basis of MDD.

The bidirectional relationship between the gut and brain (down-top influence) and the brain and the gut (top-down influence) highlight that MDD is a systemic disease characterized by both brain and peripheral dysfunction. [Maqsood and Stone 2016]; [Yarandi et al 2016]; [Liang et al 2018]; [Liu and Zhu 2018]

The gut microbiota are mediators of the stress response and their associated sequelae.

Although the microbial ecosystem is remarkably resilient (state of equilibrium), persistent stress may disturb their relative stability as the community shifts over time to a new equilibrium.

Stress-induced changes can collectively alter the composition, function, and metabolic activity of the gut microbiota. 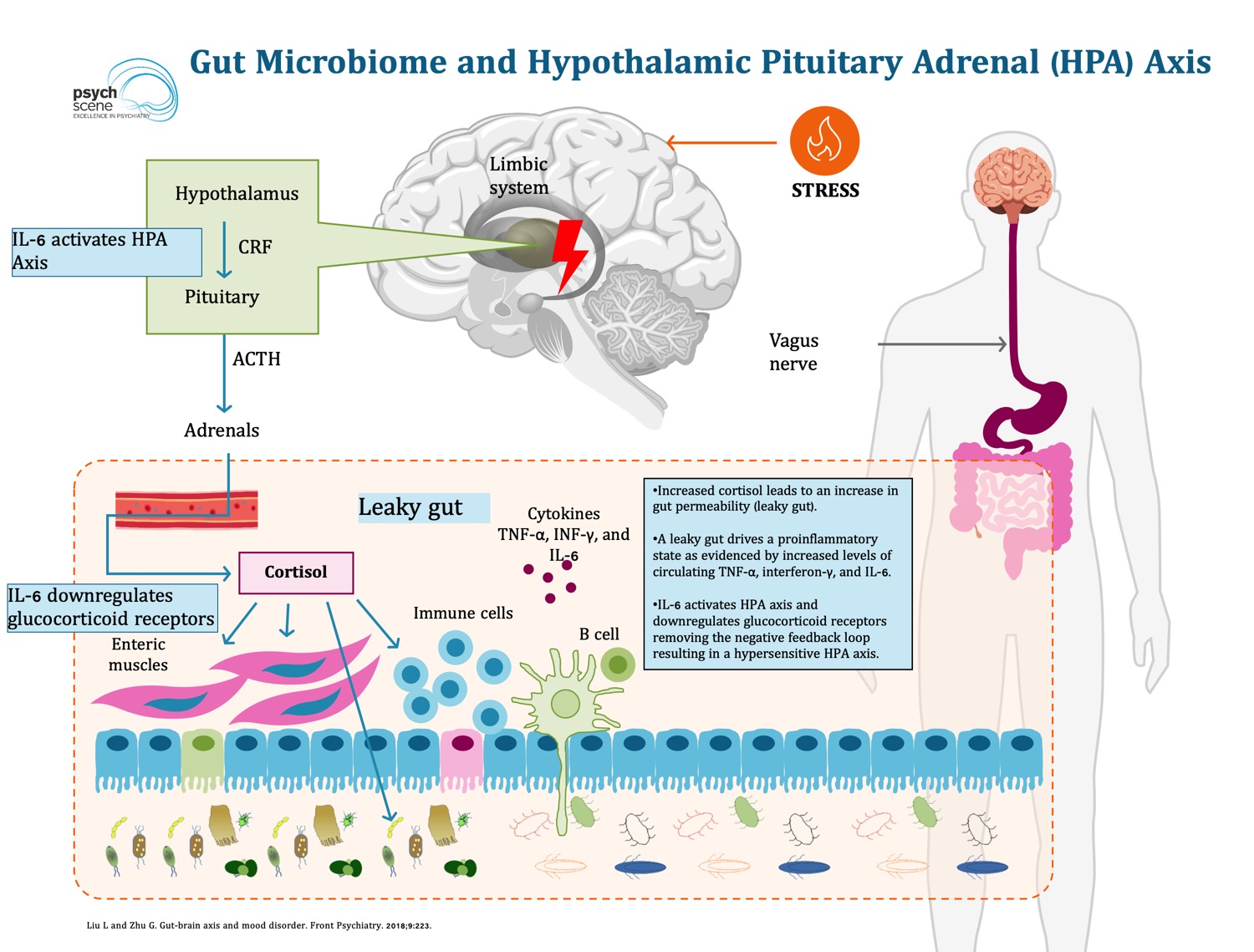 Cortisol release during acute stress is a natural biological response to the presence of stressors whereas chronic stress is a maladaptive process characterised by a dysfunctional HPA axis. Acute stress has a limited effect on the gut microbiota however chronic stress may cause a clinically meaningful imbalance in the microbial community [O’Mahony et al 2009]; [Allen et al 2017]:

Finally, it has also been shown that stress can directly model the gut microbiota composition. Evidence suggests that maternal stress can alter vaginal microbiota, which then has downstream implications for the microbiota profile in the offspring. [Jašarević et al 2015]

There is accumulating evidence that bacteria secrete neuroactive compounds that have psychiatric properties that can affect sleep, appetite, mood, and cognition. [Tang et al 2014] 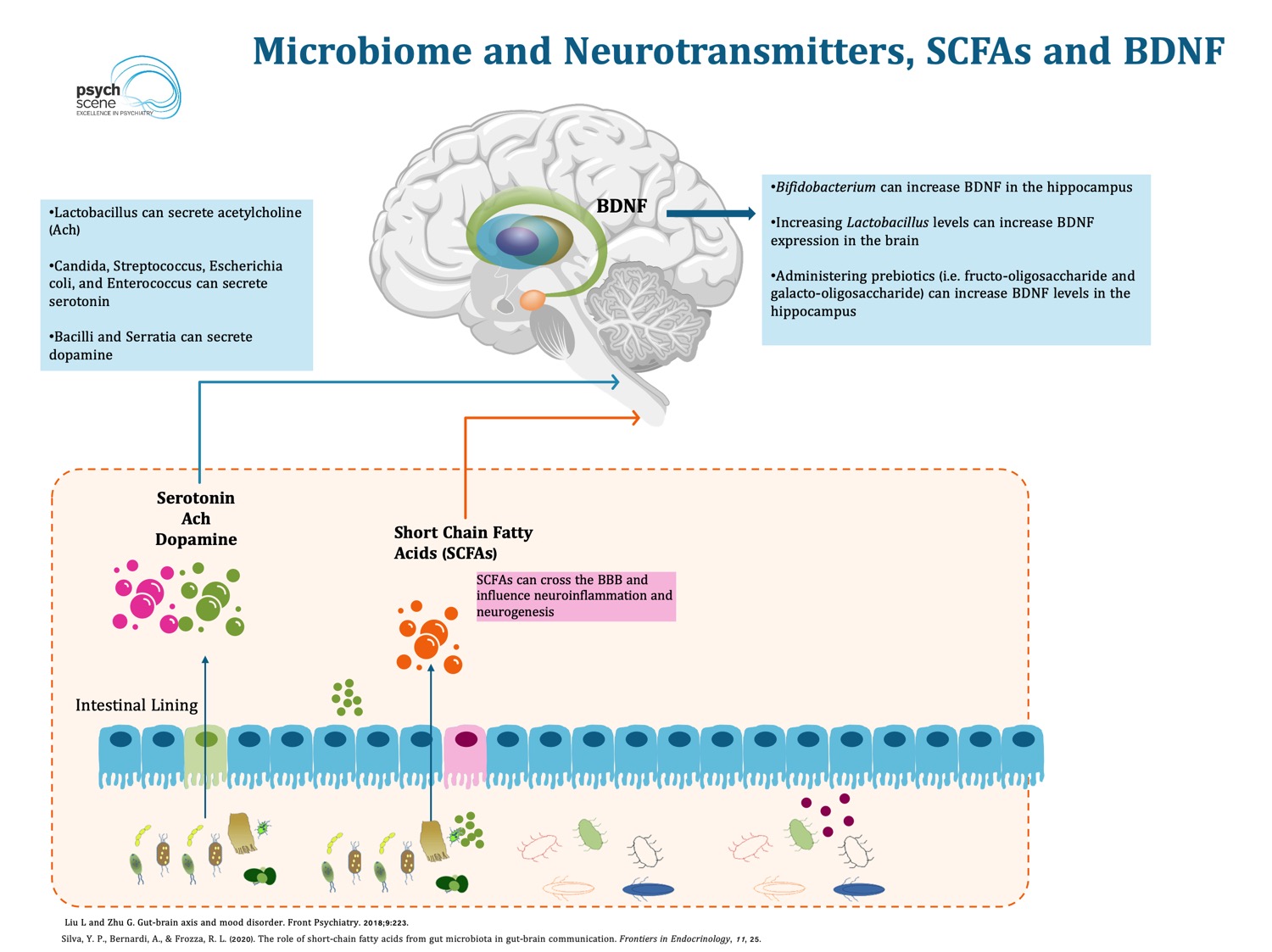 These neuroactive compounds can act locally on the enteric nervous system as well as act directly on the brain either by crossing the blood-brain barrier or communicating through vagal chemoreceptors. [Vitetta et al 2014]

Although much of this research has taken place in the laboratory, the evidence seems to suggest that these neurotransmitters can modulate synaptic activity.

However, further research is necessary to determine whether these compounds have psychotropic properties at pharmacological concentrations in humans.

Short-chain fatty acids (SCFAs) are the main metabolites produced by the microbiota in the large intestine through the anaerobic fermentation of indigestible polysaccharides such as dietary fibre and resistant starch.

SCFAs serve a number of functions:

Brain-derived neurotrophic factor (BDNF) is an important neurotrophic substance vital to the survival and maintenance of neurons associated with emotion and cognitive functioning.

There is clear and consistent evidence that alterations to BDNF levels in limbic structures play a key part in depressive neurobiology. [Duman and Monteggia 2006]; [Dawood et al 2007]; [Duclot and Kabbaj et al 2015]

The intestinal nervous system consists of 200-600 million neurons. It has therefore been given the term ‘Second Brain’. 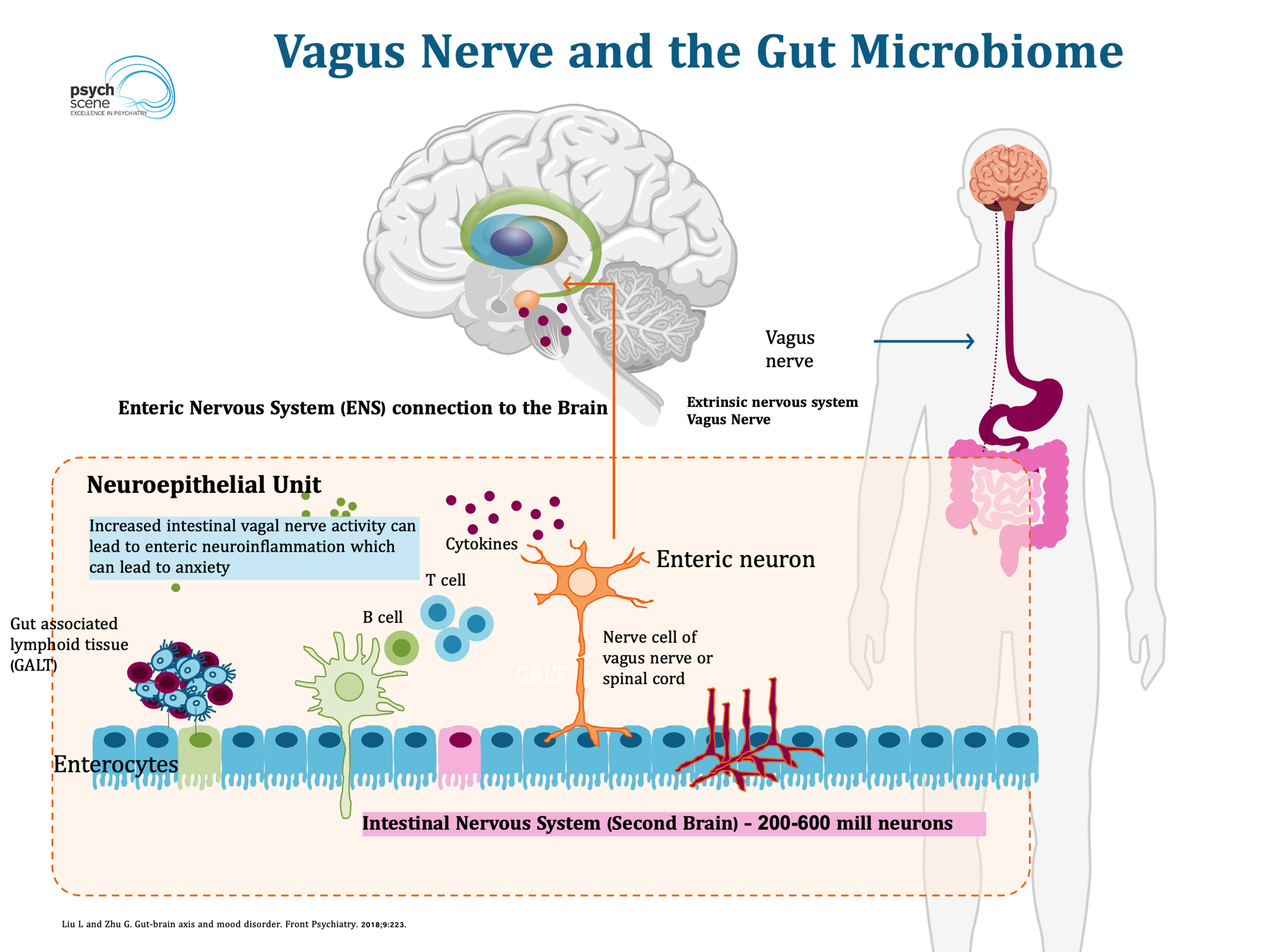 Lipopolysaccharides (LPS) are a proinflammatory endotoxin that is a component of the outer membrane of Gram-negative bacteria. 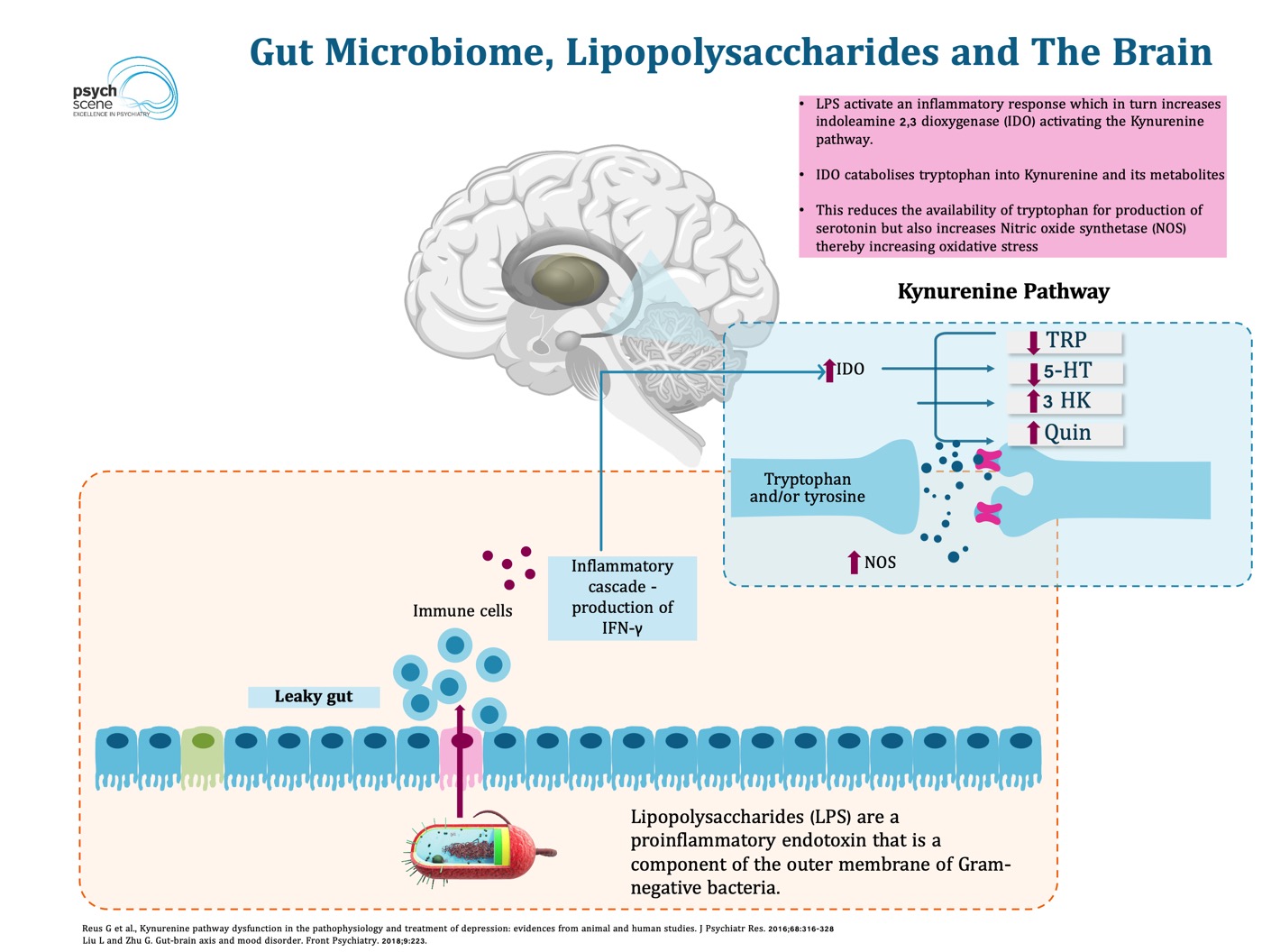 LPS can trigger an inflammatory response that has been associated with anxiety, depression, cognitive deficits, and visceral pain. [Maes 2008]; [Stevens et al 2018]

Dysbiosis therefore could result in a deficiency of micronutrients contributing to depression.

The evidence in the literature therefore suggests that broad-spectrum antibiotic administration can induce perturbations to gut microbiota composition and that this can persist for months to years.

ROLE OF PREBIOTICS AND PROBIOTICS

Dietary prebiotics are defined as

A selectively fermented ingredient that results in specific changes in the composition and/or activity of the gastrointestinal microbiota, thus conferring benefit(s) upon host health. [International Scientific Association of Probiotics and Prebiotics (ISAPP)]

The following criteria are used to classify a compound as a prebiotic:

Live microorganisms, that when administered in adequate amounts, confer a health benefit on the host. [Reid G et al., 2019]

Criteria for classification as a probiotic:

Potential mechanisms of action for pro and prebiotics include:

Evidence suggests that daily consumption of a probiotic supplement could have a positive effect in improving the mood, anxiety, and cognitive symptoms present in MDD.

Probiotics may have the most significant effect on symptoms of anxiety, which is often co-morbid with MDD. [Wallace & Milev, 2017].

According to the systematic review:

The robust evidence compiled and presented in this review indicates that treatment with probiotics may improve symptoms associated with MDD by increasing serotonin availability and/or decreasing levels of inflammatory markers. The potential of probiotics to be used as a novel treatment for MDD could have a major impact on those seeking antidepressant treatment by reducing the stigma, latency and side effects associated with typical antidepressants. Despite extensive preclinical data, the clinical effects of probiotics on mental health have yet to be studied comprehensively in a sample of depressed patients. Further research is warranted to determine probiotics’ efficacy for alleviating depressive symptoms, as well as the ideal duration of treatment, dosage, and strain of probiotic for achieving efficacy in terms of mental health. [Wallace & Milev. 2017]

No worsening of parameters of anxiety or depression were observed in any of the studies.

The gut microbiota is strongly associated with MDD and this relationship stems from the bidirectional MGB axis that connects the brain with the gut.

It is hypothesised that alterations to the diversity and composition of the gut microbiota may be a risk factor for developing MDD, which in turn may play a role in symptom severity.

Research supports the notion that specific bacterial species are linked to depressive behaviours and therefore there is substantial clinical potential for the development of gut microbial profiles related to depressive disorders.

Prebiotics and Probiotics may be potential treatment options for depression however more reseach is needed.

Furthermore, no consensus has arisen about specific bacterial strains and depression, some authors suggest that studying microbial functioning may be more productive than a purely taxonomic approach to understanding the gut microbiome in depression. [Cheung et al., 2019]

Lost in Translation: The Gut Microbiota in Psychiatric Illness

The interplay between the intestinal microbiota and the brain

Microbiota is essential for social development in the mouse

Gut-brain axis: how the microbiome influences anxiety and depression

Valles-Colomer et al., The neuroactive potential of the human gut microbiota in quality of life and depression. Nature Microbiology. 2019;4:623-632.

Modulatory Effects of Gut Microbiota on the Central Nervous System: How Gut Could Play a Role in Neuropsychiatric Health and Diseases

Recognising depression from the microbiota-gut-brain axis

A psychology of the human brain–gut–microbiome axis

Jašarević E et al., Alterations in the Vaginal Microbiome by Maternal Stress Are Associated With Metabolic Reprogramming of the Offspring Gut and Brain. Endocrinology. 2015;156(9):3265-3276.

Psychobiotics and their involvement in mental health

Kynurenine pathway dysfunction in the pathophysiology and treatment of depression: evidences from animal and human studies

Antibiotic exposure and the risk for depression, anxiety, or psychosis: a nested case-control study

Impact of maternal intrapartum antibiotics, method of birth and breastfeeding on gut microbiota during the first year of life: a prospective cohort study

The effects of probiotics on depressive symptoms in humans: a systematic review.

Food & mood: a review of supplementary prebiotic and probiotic interventions in the treatment of anxiety and depression in adults